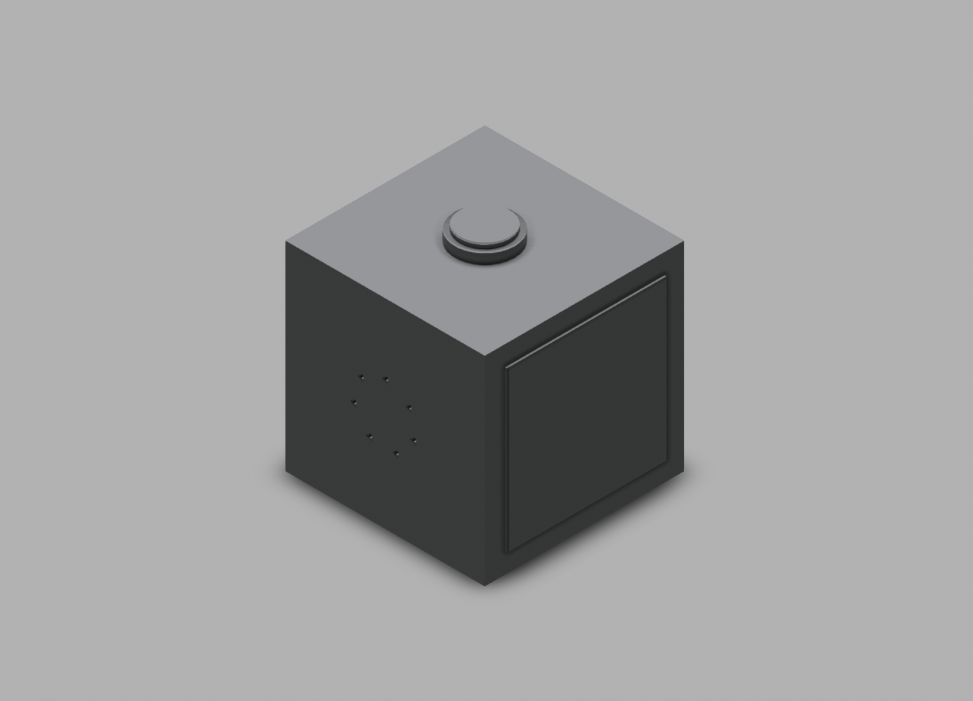 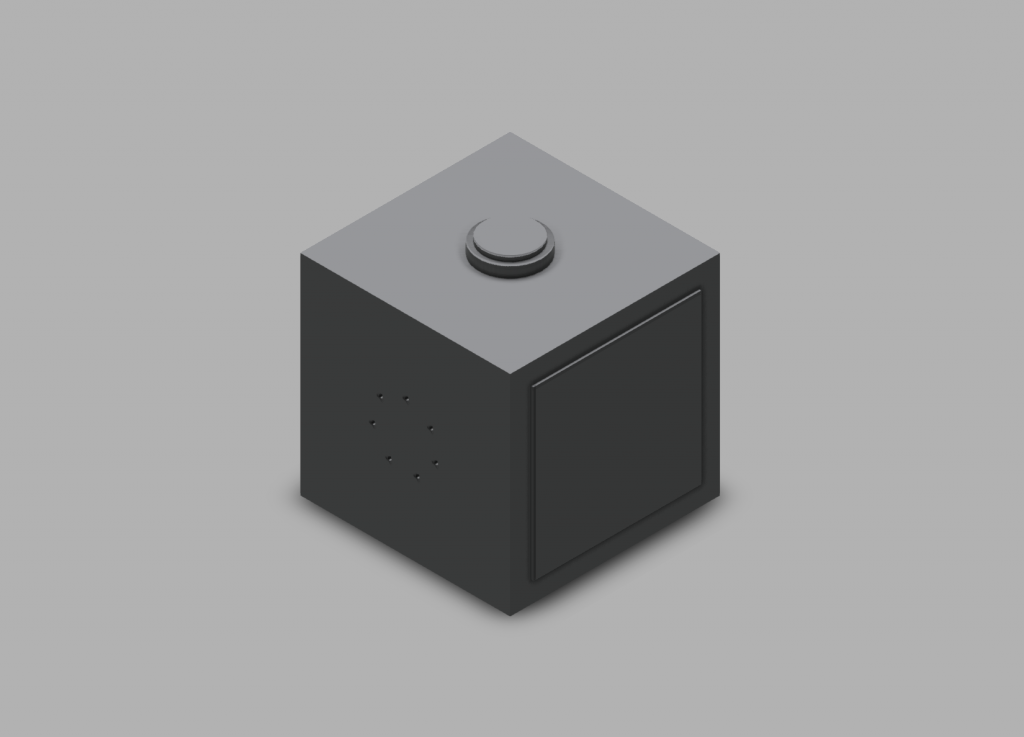 Our team is trying to create a personal useful device for an elderly person that may improve a certain aspect in their daily routine  or bring more positivity in their life. Our client is Fredrick and he enjoys exercising, however, he wishes that his daily exercise could be varied in order to make it more interesting everyday.

How can a device be easy to use for Fredrick and fulfill the purpose of making his exercise routine more interesting? 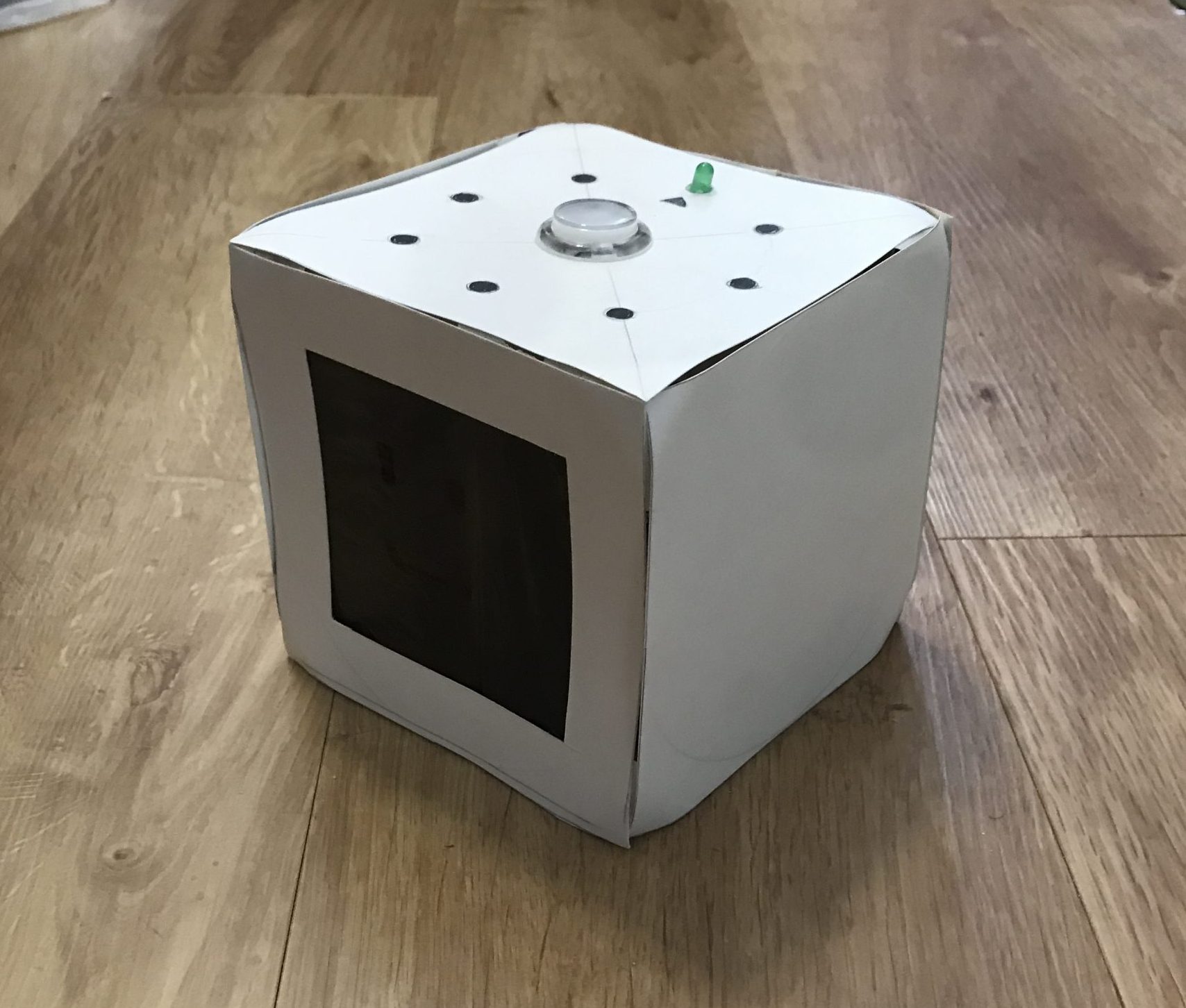 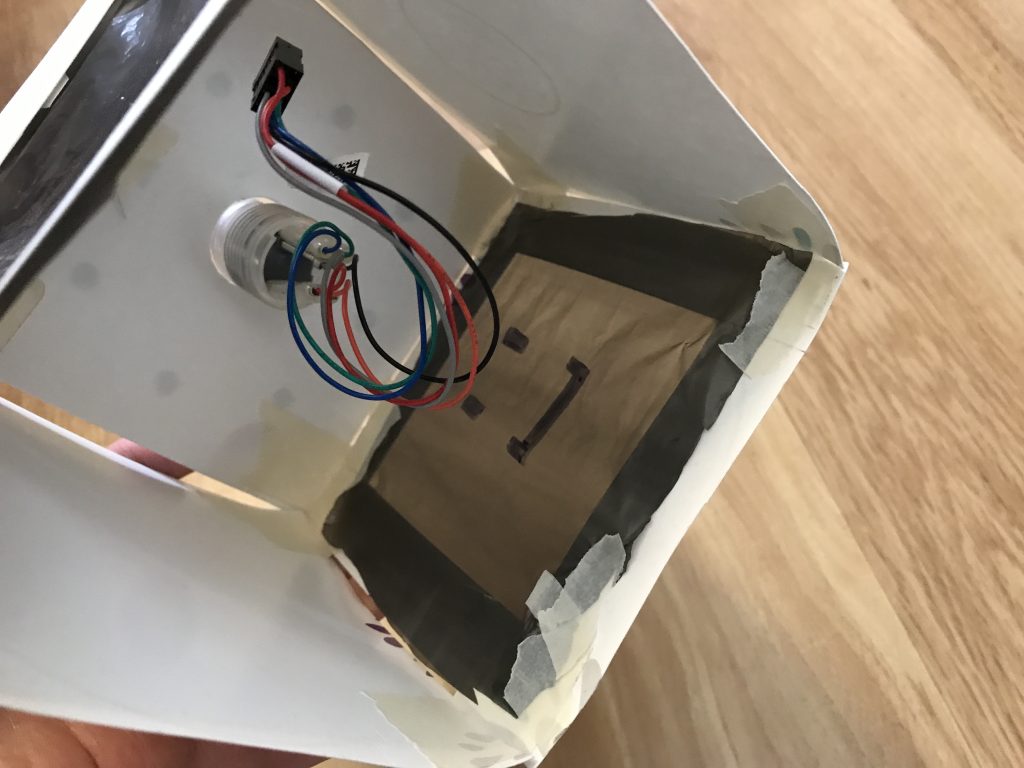 Interacting with the prototype

The device  reflects the look and interaction of the final device we would like to build. It simulates:

The device should be on a smaller scale so that it’s easy to hold in one’s hand and to carry around. Appearance wise, it should be be simple and also have only the essential interactive touch-points such as the one button.  The first level of feedback the user should receive is sound, the exercise that is announced. Then sight is secondary where the user is able to see the LED progression and check the description on the back LCD screen if needed. 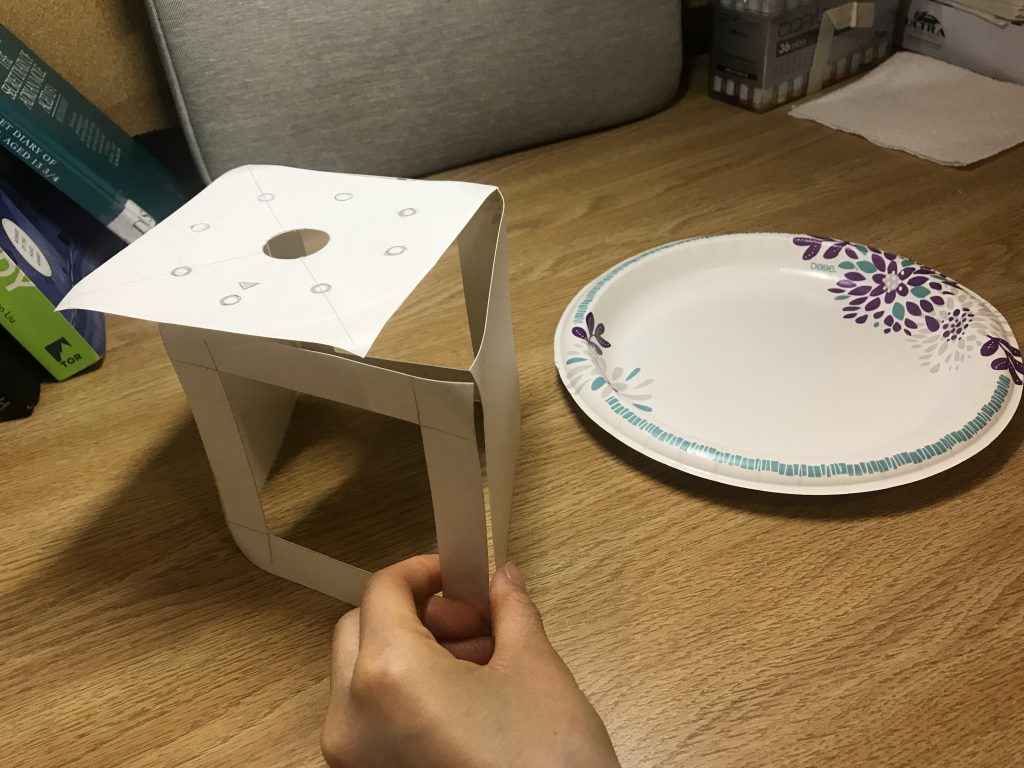 The white exterior was made from paper plates 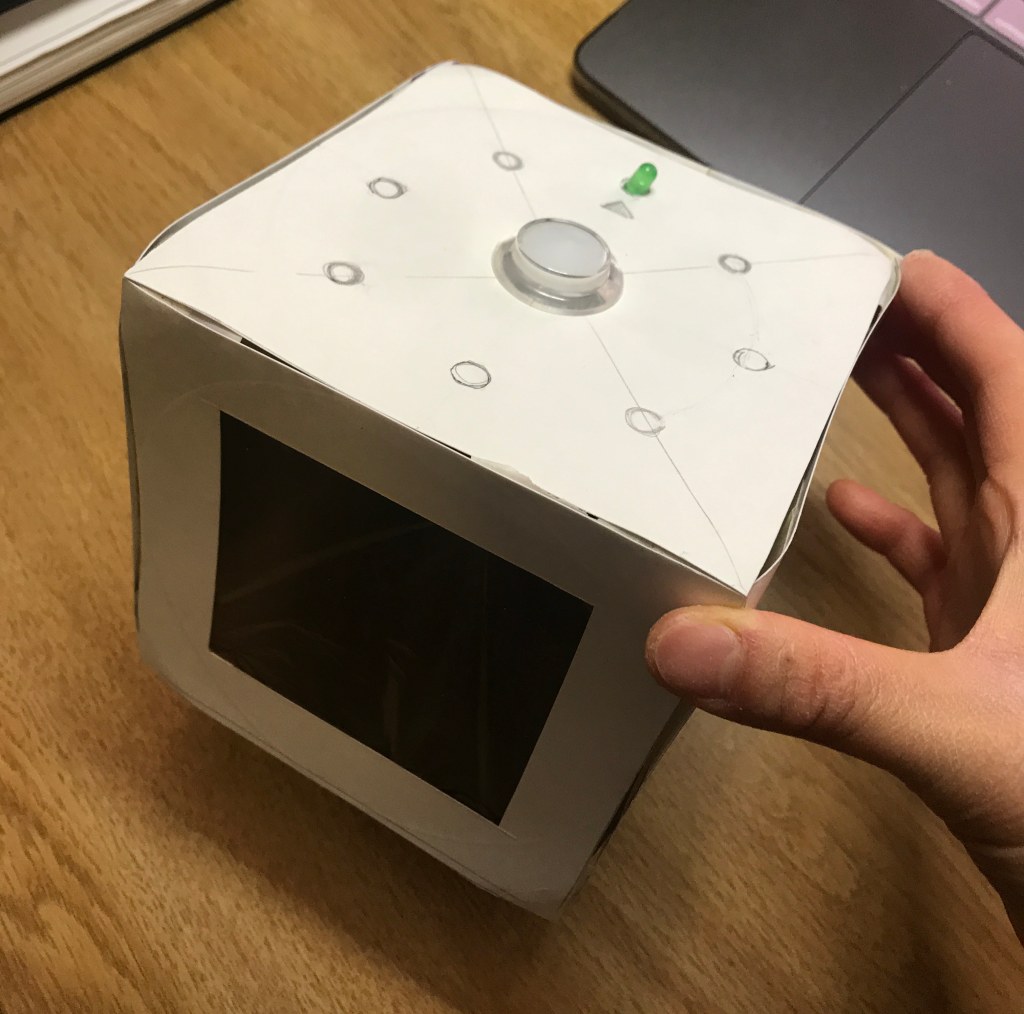 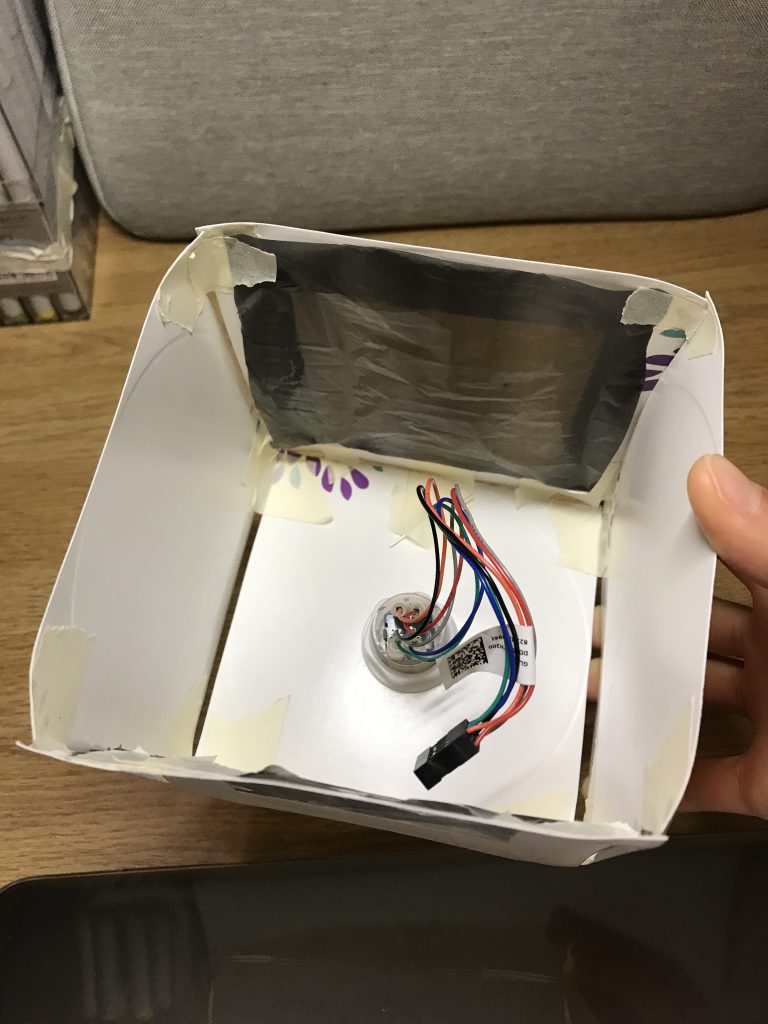 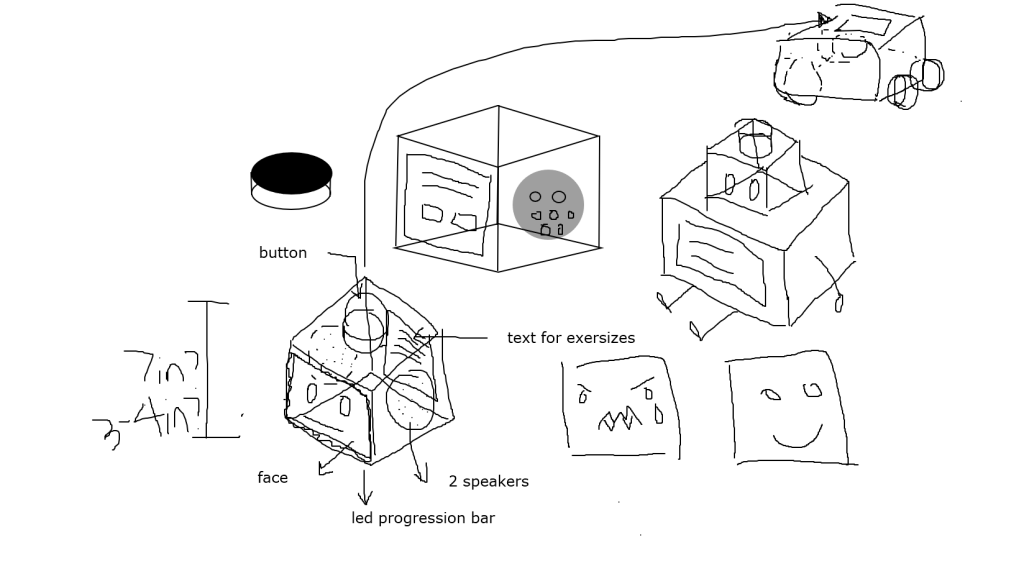 I talked to a friend that was close to me in proximity what he thought he could do/use with the prototype without any context at first. He said that there was obviously a button to press and something would happen. Then after I explained to him what the purpose of the device was and about the project he said the device made sense. I did not really receive much feedback from him, and this could be because I told him that it was made for an elderly person and involves his daily exercise routine, so perhaps he was not able to relate.

During our video call feedback with Fredrick, I felt like I was able to receive much more feedback that changed the design of the product.  He is very straightforward in his feedback and so he told us that he did not need a countdown/timer for each exercise routine, he wanted to be able to take his time. Therefore, instead of our LED strip/ring being a timer function, it would just show the progression of the entire exercise routine. Fredrick said he really appreciated these extra features. Also, he wanted a voice recognition feature that would signal to the device to move onto the next exercise instead of clicking the button every time. This was very helpful for us and allowed us to improve our device to his needs.

Fredrick was able to answer some of the questions that I had, for example, if he wanted to be able to add/delete exercises from the routine or add sets and reps. He said that he did not need to do that and he would vary the sets and reps by himself. I think he prefers to have space for his own freedom when using tools like this. We also wanted to confirm with him if he liked the idea of anthropomorphizing the device with a little LCD face that changes from time to time to encourage him to do the routine. He stated that he liked this idea, and so we will continue to pursue this.

How might the visual appearance of the exercise companion motivate Frederick during his workout session? 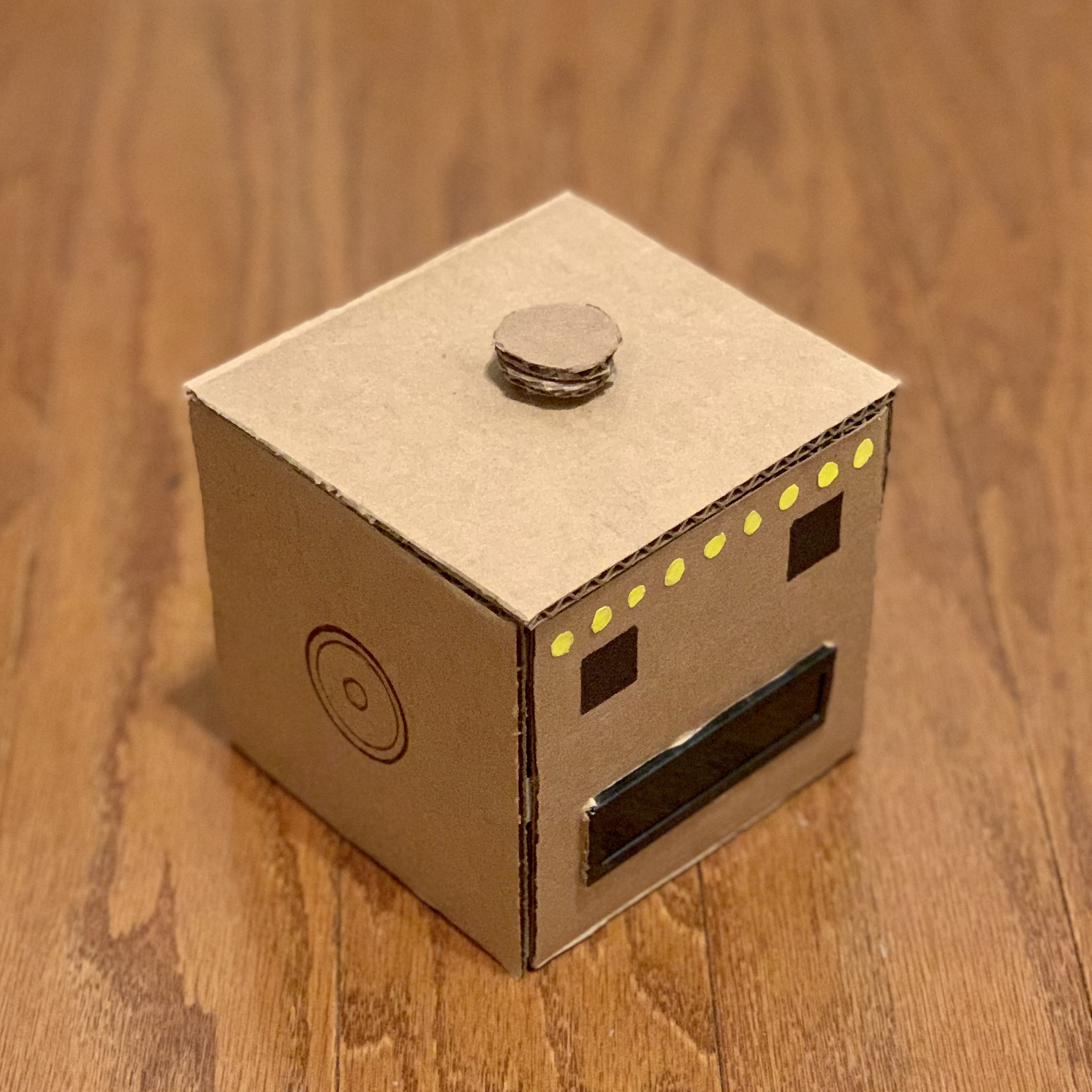 The prototype of the Exercise Companion 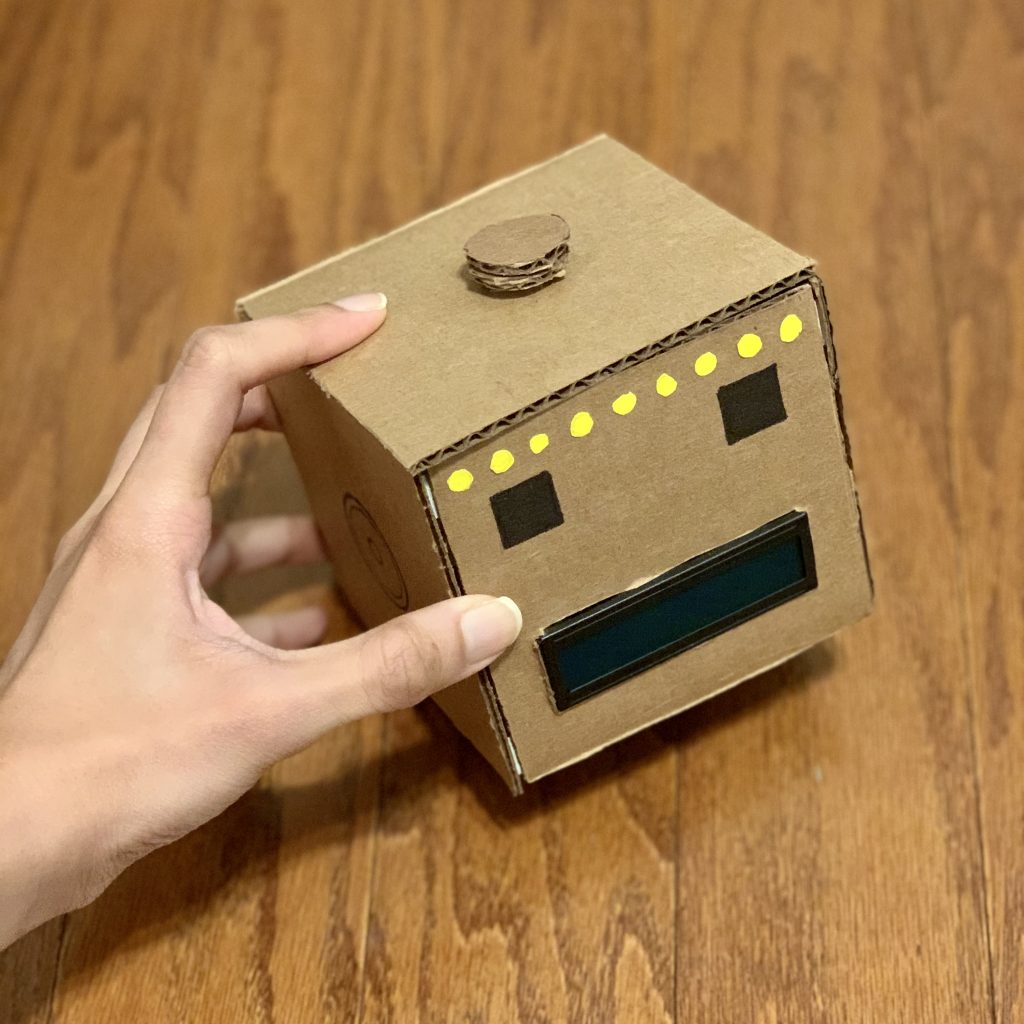 I built this prototype using the materials I had available such as carboard, markers and a box cutter. I created the prototype to have a friendly face like front which could house an LCD screen that could display the name of the exercise for Frederick. A strip of LED lights could indicate Frederick’s progress during a workout session. The prototype also has two speakers on the sides which would announce the name of the exercise so that Frederick wouldn’t have to constantly look at the device to know which exercise to do next. The prototype also has a physical button on the top which could allow Frederick to switch to the next exercise.

I tested the prototype with my roommate to get feedback on it and iterate. I provided her the context of the prototype and asked for her feedback. As I spoke to my roommate, she mentioned that it would’ve been useful to have the number of exercises completed in the workout aside from the visual progress bar displayed as it would be motivating for her. She also mentioned that she preferred a smaller form factor for the device in case she wanted to travel with it. Overall she felt the visual appearance of the device would make her feel more accountable as she did her exercises due to its anthropomorphic appearance. 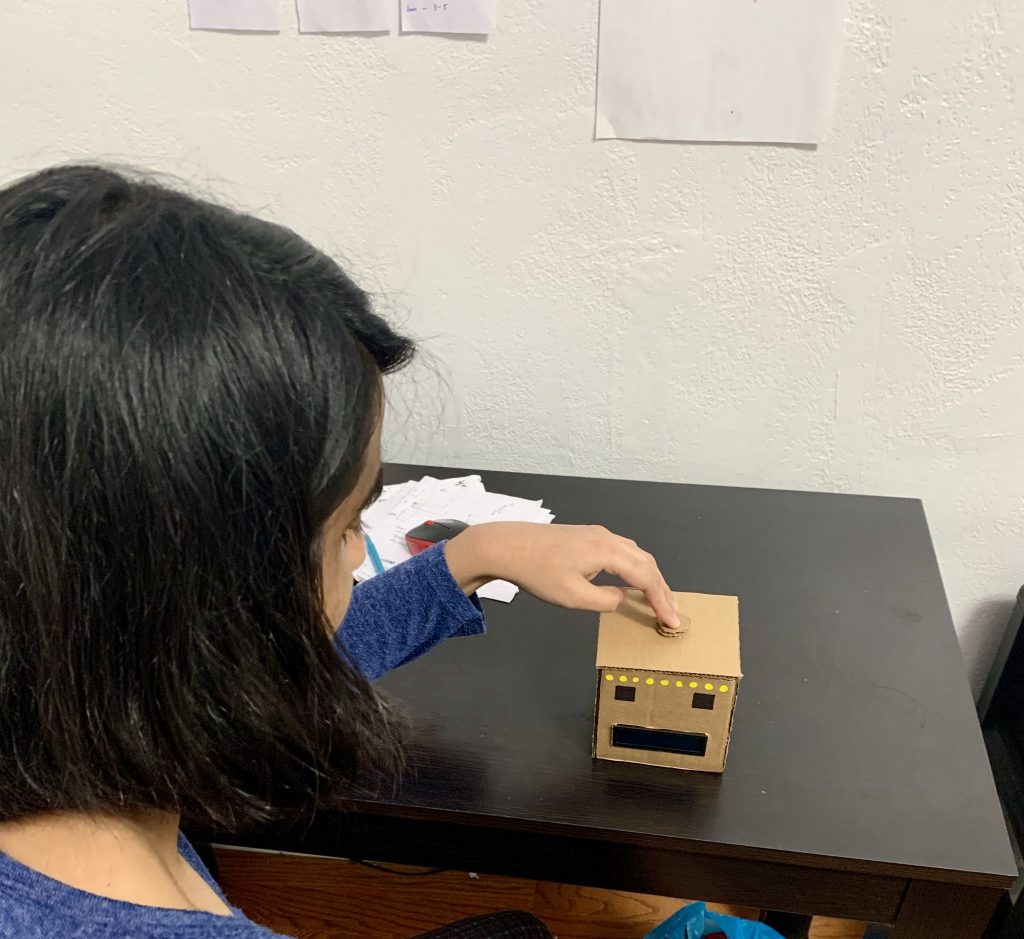 Testing out the looks-like prototype 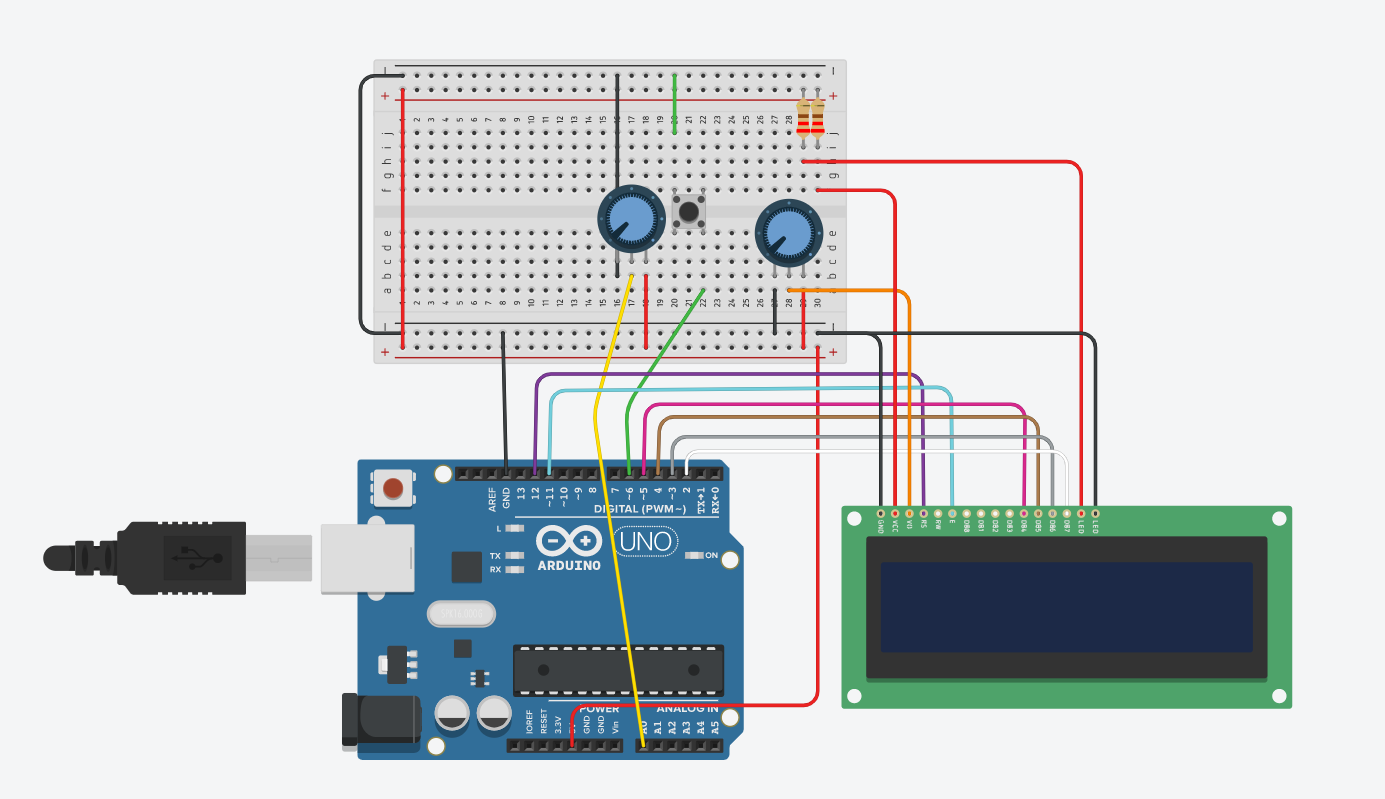 Overall View of the Prototype 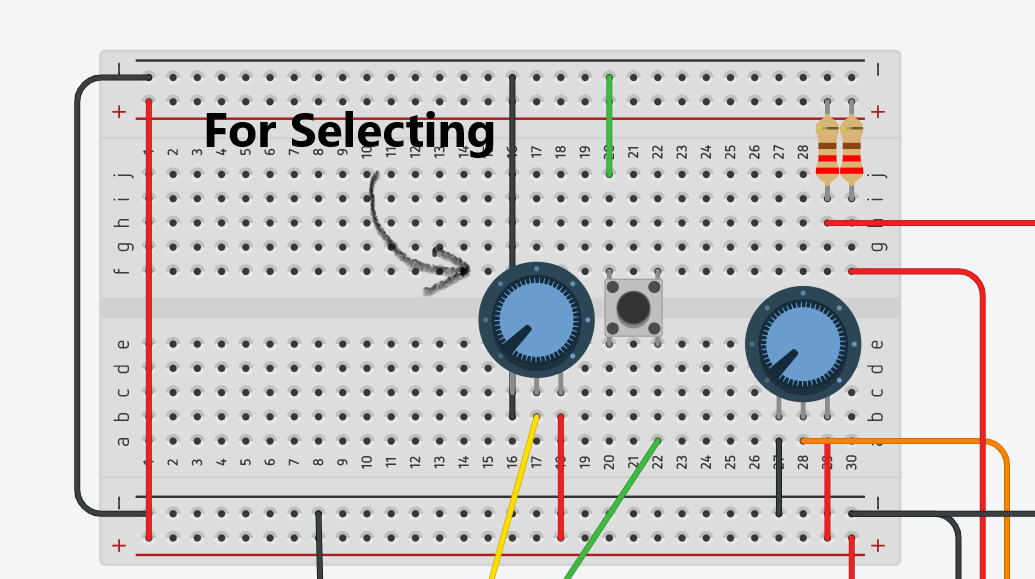 The potentiometer on the left is for selecting the sets of exercise. The other is for the contrast of the LCD screen.

This is a behave-like prototype designed to help answer the design question : will the user find the device easy to use.

The major components of this prototype is a potentiometer, a button, and a LCD screen. The LCD screen represents the TFT screen that shows the name and the image of the exercises.  Fredrick can use the potentiometer to choose one of the three sets of exericese by turning it to the leftmost, middle, and rightmost positions. The device moves to the next exercise when the button is pushed. 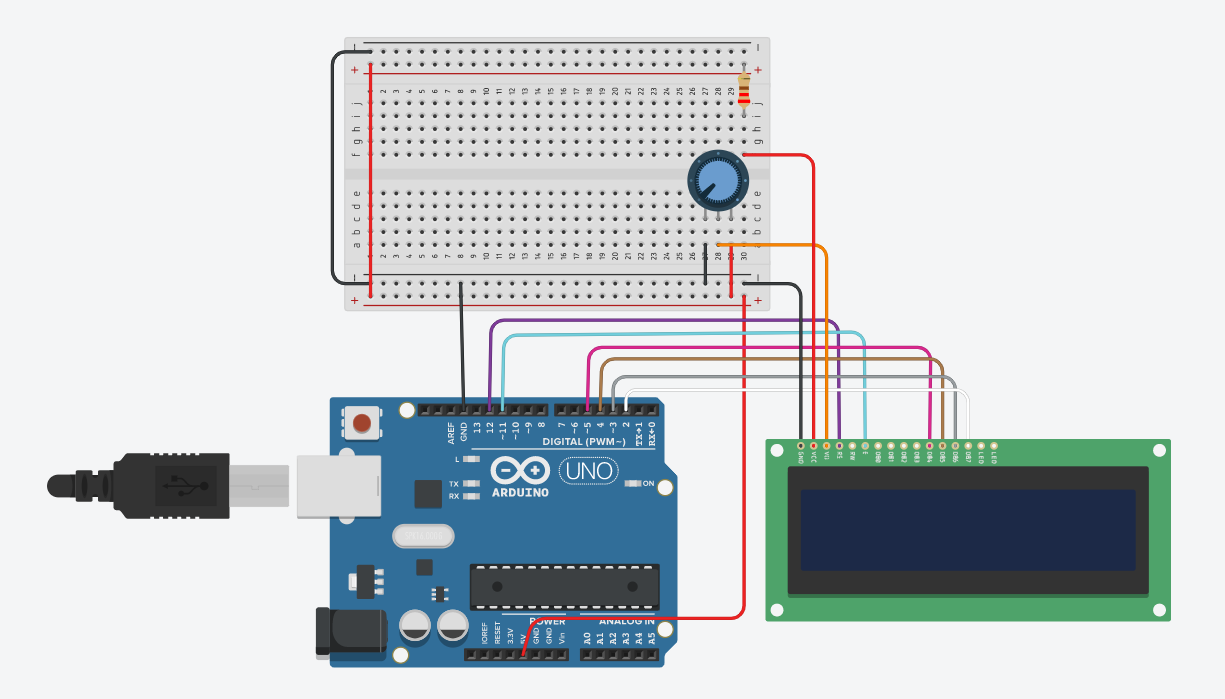 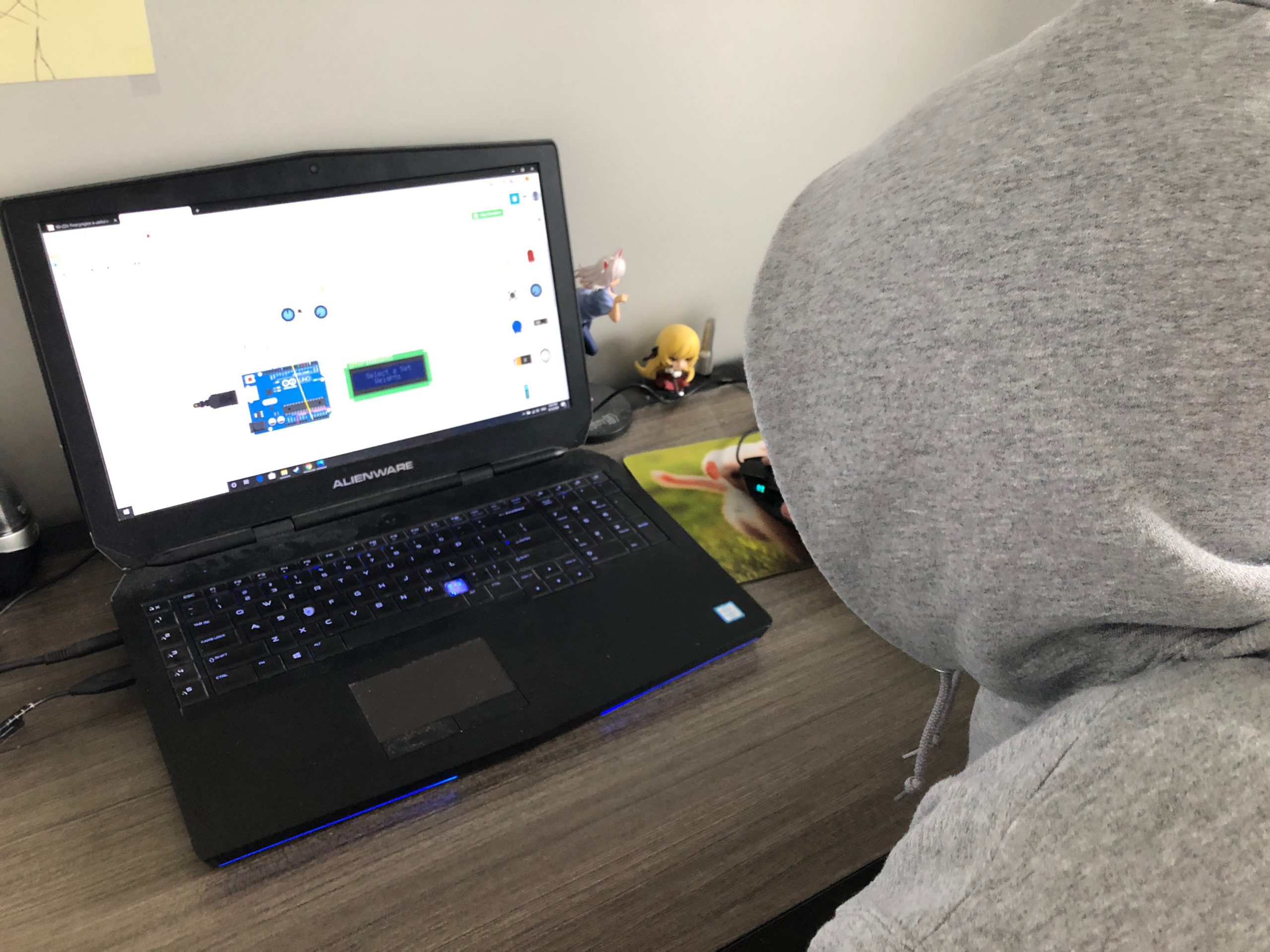 Leon is interacting with the stimulation

The next step is to include TFT screen that can display high-quality image for each exercise and the “face” of the device.

In the in-person prototype feedback session with my friend Leon I have learnt that the prototype is not easy to use without verbal explanation yet. Even though there are only one potentiometer and one button to manipulate, more information should be given on the screen. In addition, the range of angle for selecting sets is too small such that the options for the set only show up when the tip of the potentiometer is pointed precisely to certain angles. Moreover, when the name of the exercise is too long for the screen to display, the text scroll to the right. However, according to Leon the text will be more readable if it scrolls to the left. To better display all the information, tft screens will be used. Finally, when Leon tried to go to the next exercise by pressing the button, he found out that sometimes the device would skip exercise. This bug was fixed by checking the state of the button in every so often to prevent over counting.

In the discussion with Fredrick, we have gained a better idea about how Fredrick would like the device to behave. Fredrick mentioned that he did not want the device to have a timer feature because he does not like to rush through an exercise. This means we will not include such feature anymore even though we thought it’s a common and important feature for a workout device. In addition, he would prefer exercises that require similar postures to be put next to each other in the sequence of the exercises. This imposes more challenge software-wise, but no doubt makes the exercise routine more efficient. Finally, we were glad to found out that Fredrick appreciate the idea of LED ring as reward to finish each exercise in the set.

Our conversation with Fredrick after each being able to think about the problem and bring a solution was extremely helpful. Through this talk, we were able to receive key aspects of the design that was beneficial to Fredrick. It was difficult to test out the prototypes due to the limited people physically around you. Some members of the team were able to receive constructive feedback while other feedback was “too positive”.  It is difficult at times to ask people who are not used to critiques to give feedback on your work, because unless there is something significantly unsatisfactory about the design, they would usually say that the work is good and not much more. Next time in my prototyping process, I would want to ask more people whether that be meet them in person or virtually to ask for feedback. This is a good reminder for us in the future to conduct more research onto prototypes to gain more insight into the problem and thus create a better solution.

Important new decisions we made together as a team after talking to Fredrick, was to include a voice feedback system, where Fredrick could signal to the next exercise with his voice. Also, knowing that he does not need to time each exercise; he would rather prefer a progression bar for the entire routine of exercises.

Since we already have a clear vision about the device as a group before developing the prototypes, and because Fredrick has given positive feedback about the prototypes, we have decided to stick with the original design of a cube-shape design. However, we still have to determine the details of the design, such as the dimensions and layout of the electronics. Because the developments of 3D rendering and software/hardware are going in parallel, communication and collaboration are crucial. Finally, an interactive diagram and storyboard will be created as an instruction for actually creating the device.