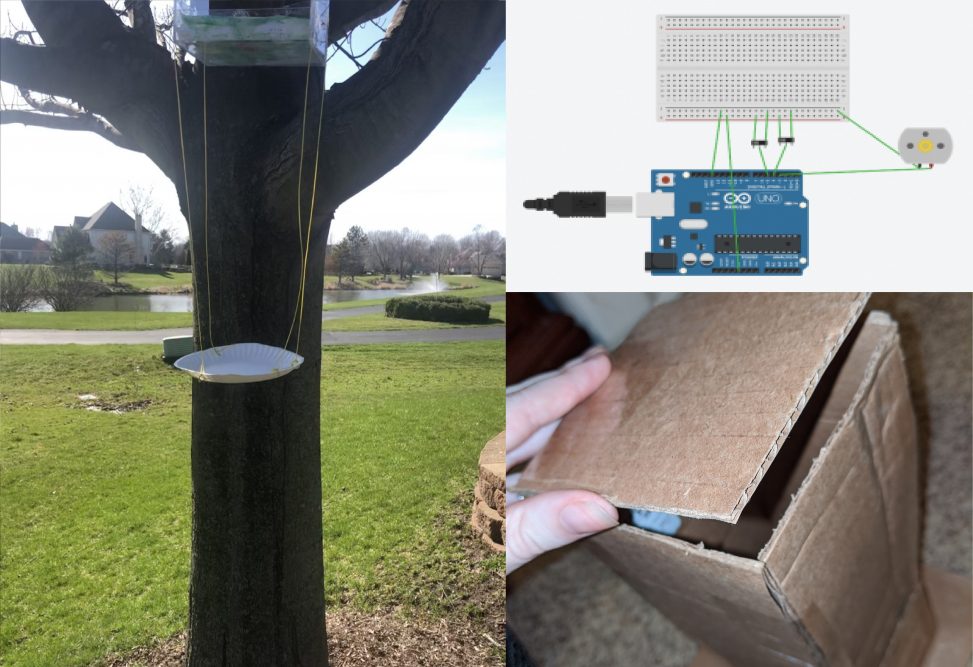 We (Leah, Abel, and Varsha) were paired with a retired English teacher named Jane. On March 25th at 10:00am we interviewed Jane to get an opportunity to learn more about her and find out how we can help her with any problems she has. The results of our meeting is detailed here.  After meeting with her and brainstorming, we came up with some prototypes that we believed could help solve some of her problems. Jane is interested in feeding birds, but she worries about pests eating the feed she leaves for them. Thus, we decided to make an automated bird feeder. Below is the details of our prototype, which we split into 3 different parts that each team member worked on.

The “housing unit” of the bird feeder is the feeder and base. The final product is intended to be automated. When a bird lands on the base, the feeder will automatically open and dispense seed. The prototype was made out of cardboard due to a lack of resources, but the final version of the feeder is intended to be made of acrylic or some other waterproof material. This looks like prototype was designed to help answer the design question: what should the dimensions of the bird feeder be, and how should the dispenser open to deposit seed?

I began making the prototype by getting some cardboard out of my recycling bin. 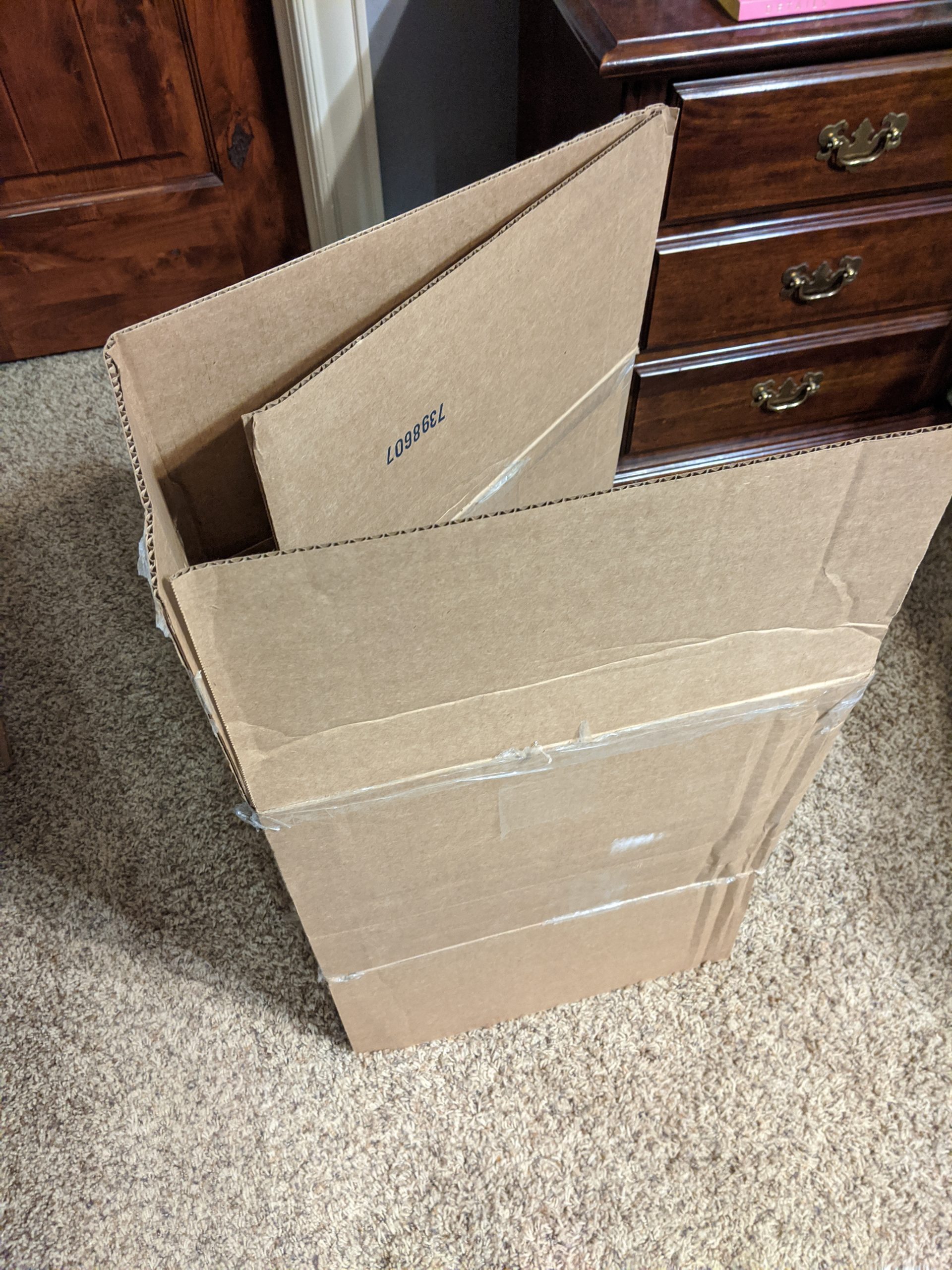 The cardboard material I used to make the prototype

As I stated earlier, the final product will be made of acrylic or some other waterproof material. After cutting the cardboard and taping it together, I realized the size was way too large, requiring me to rip the tape off and cut it smaller. 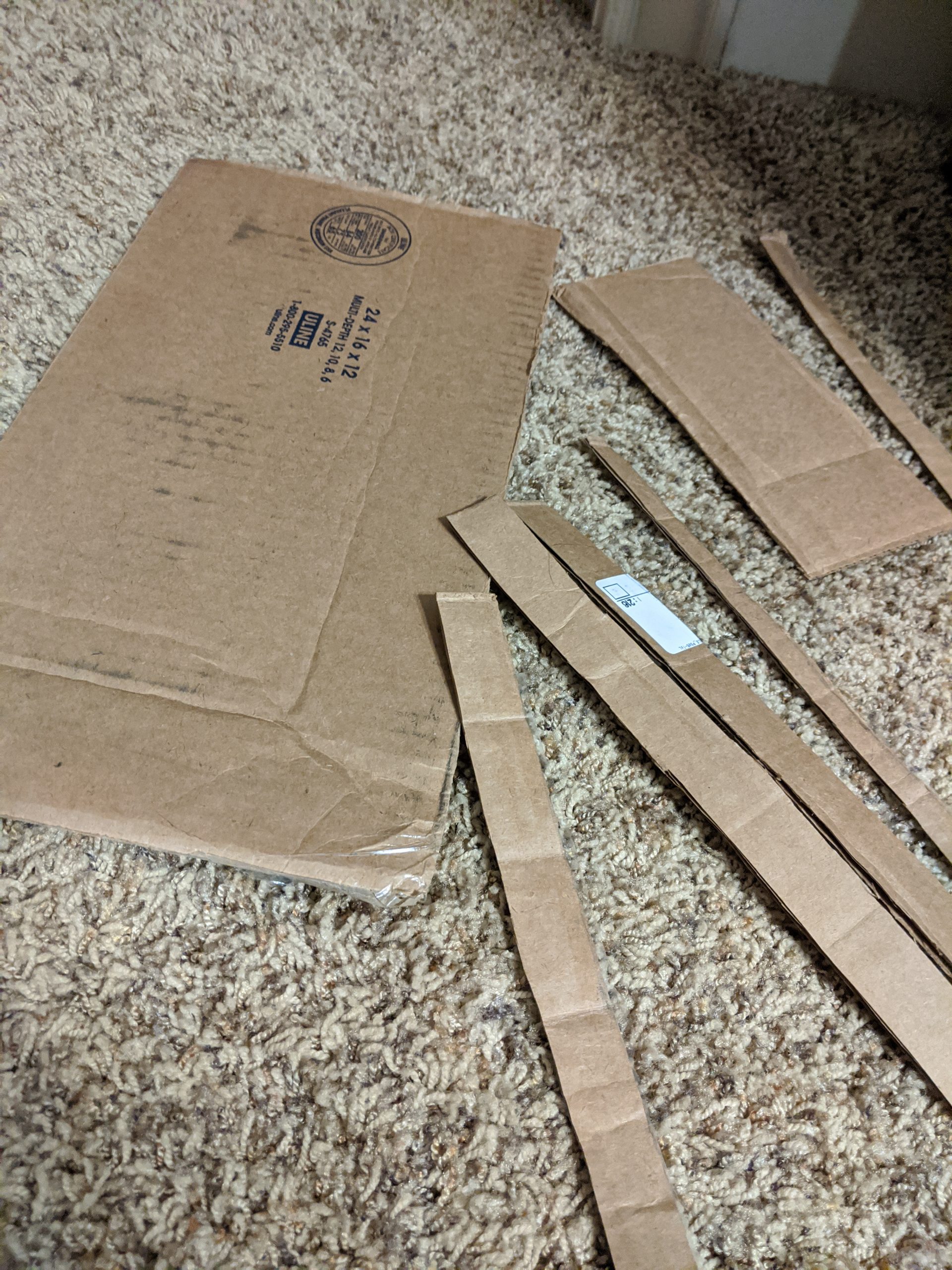 After fixing the problem, the housing unit prototype was finished, and I showed it to my sister for her criticism.

My sister looking over the feeder and offering her feedback.

Below are the images of the finished prototype: 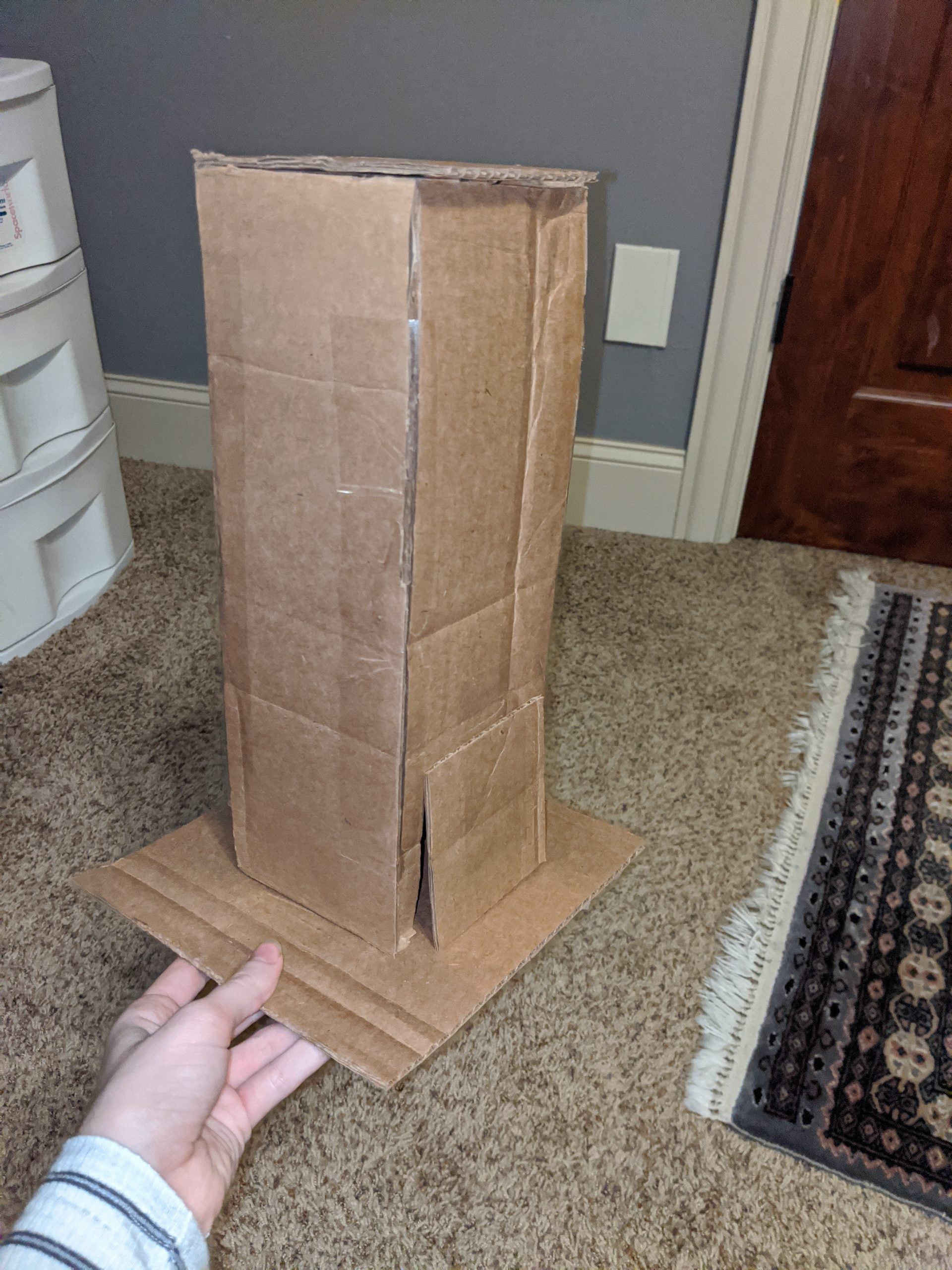 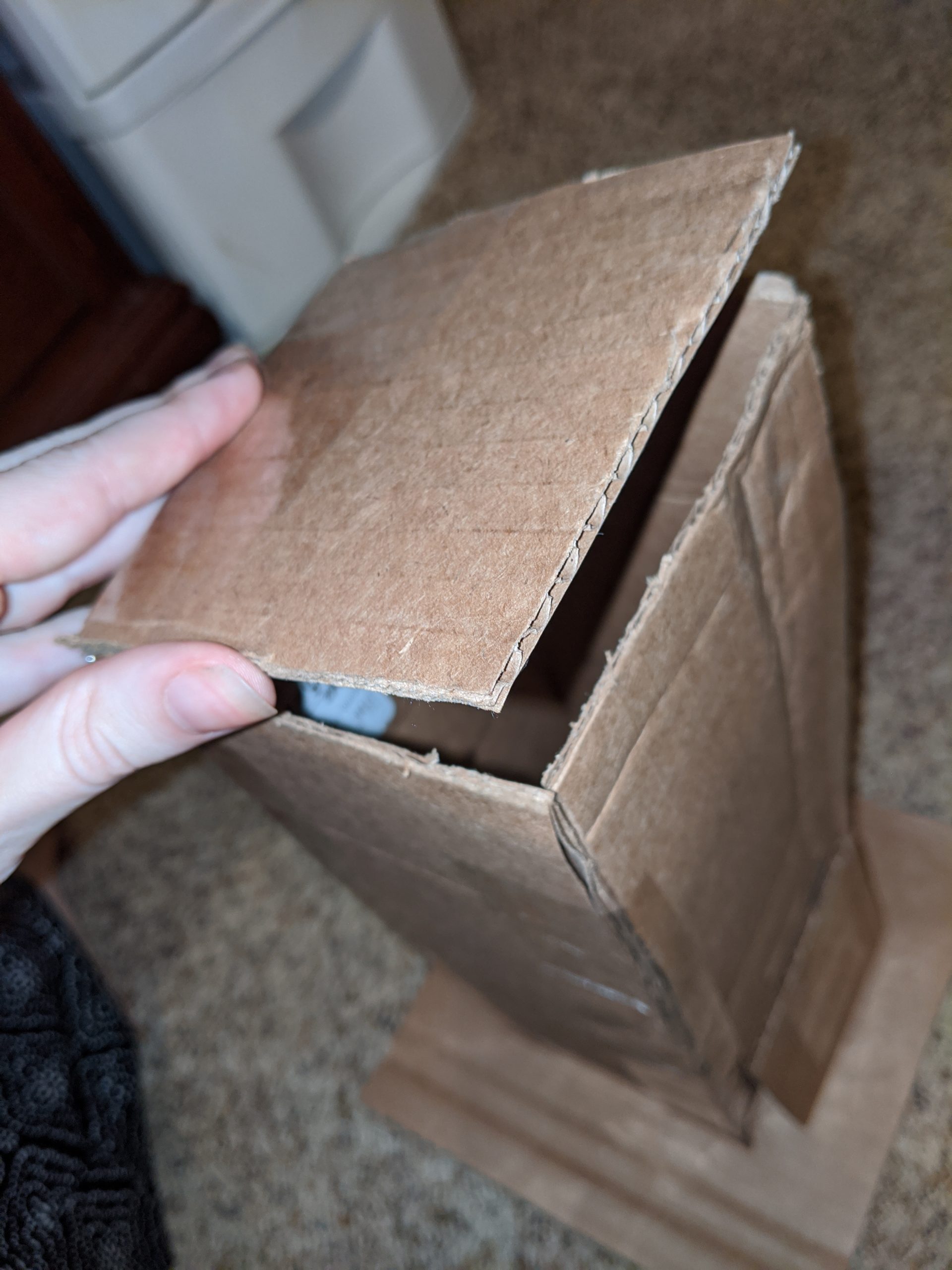 The lid of the bird feeder slightly opened 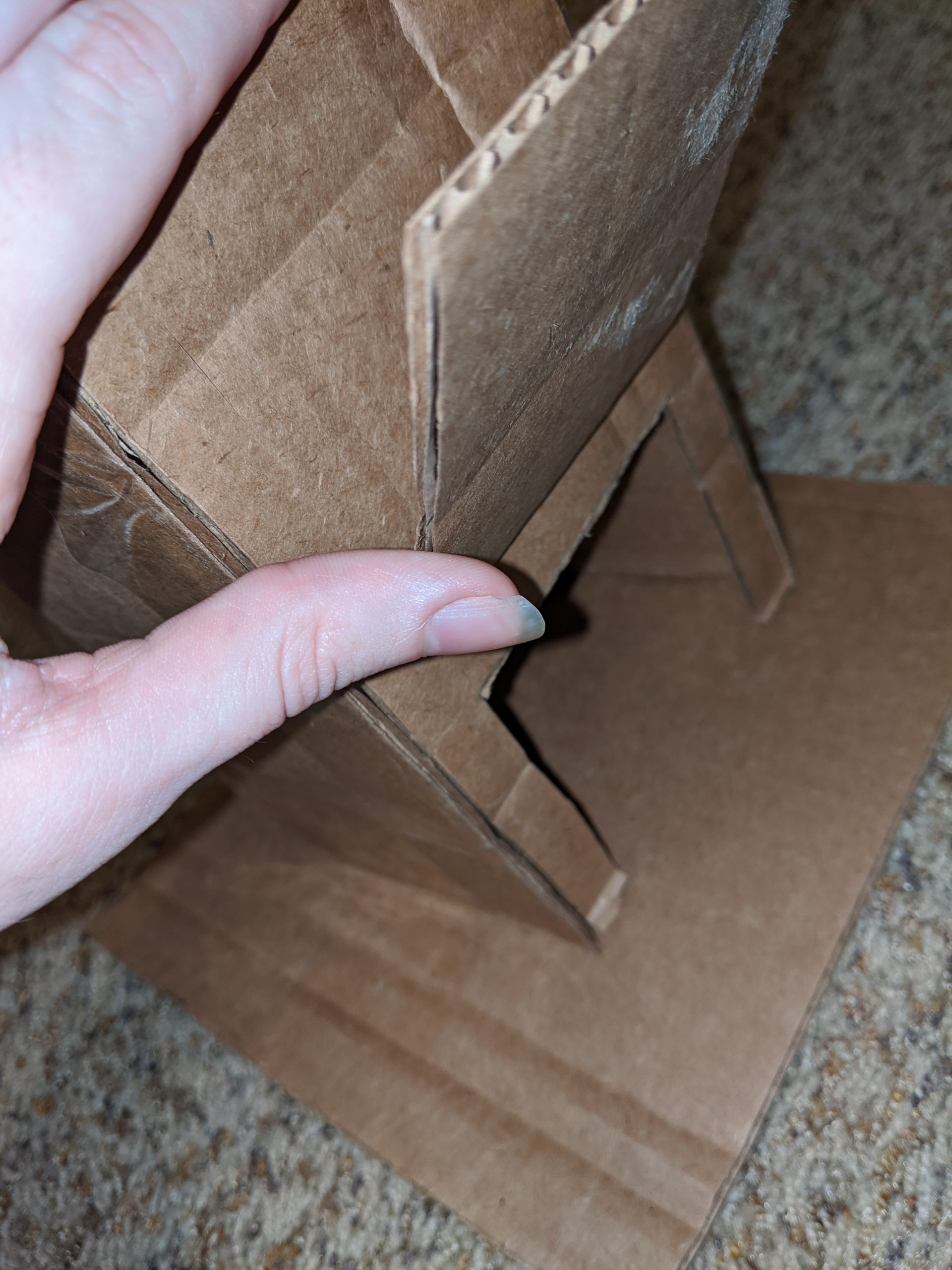 The dispenser of the bird feeder while opened

The movement of the lid and dispenser while opening:

Jane had no criticism for my prototype, but my sister had a lot to say about it. She brought up three key areas I could improve upon for the final project. She thought the lid I made was very flimsy. She was worried that a bird would be able to easily flip it open, so she thought I should attach a latch. Furthermore, she was concerned about how I would position the feeder in the garden. She wasn’t sure if I would place it on a pole, hang it on a branch, etc. She also told me that as long as the dispenser opened it didn’t matter how it did so, but she thought making it a sliding “door” would be easier.

Ultimately, I got the answers to my questions. The size and dimension of the feeder was good, but the dispenser and lid could use improvements. I will be incorporating all of the feedback I received because everything my sister said is completely valid. There are a lot of changes I can make to the lid and dispenser to address her criticism and make the bird feeder better. Plus, I completely forgot to include the hook on the bird feeder. These are all important elements to it, so I will be making the necessary changes according to the feedback I received.

I started out with some common materials found around the house. 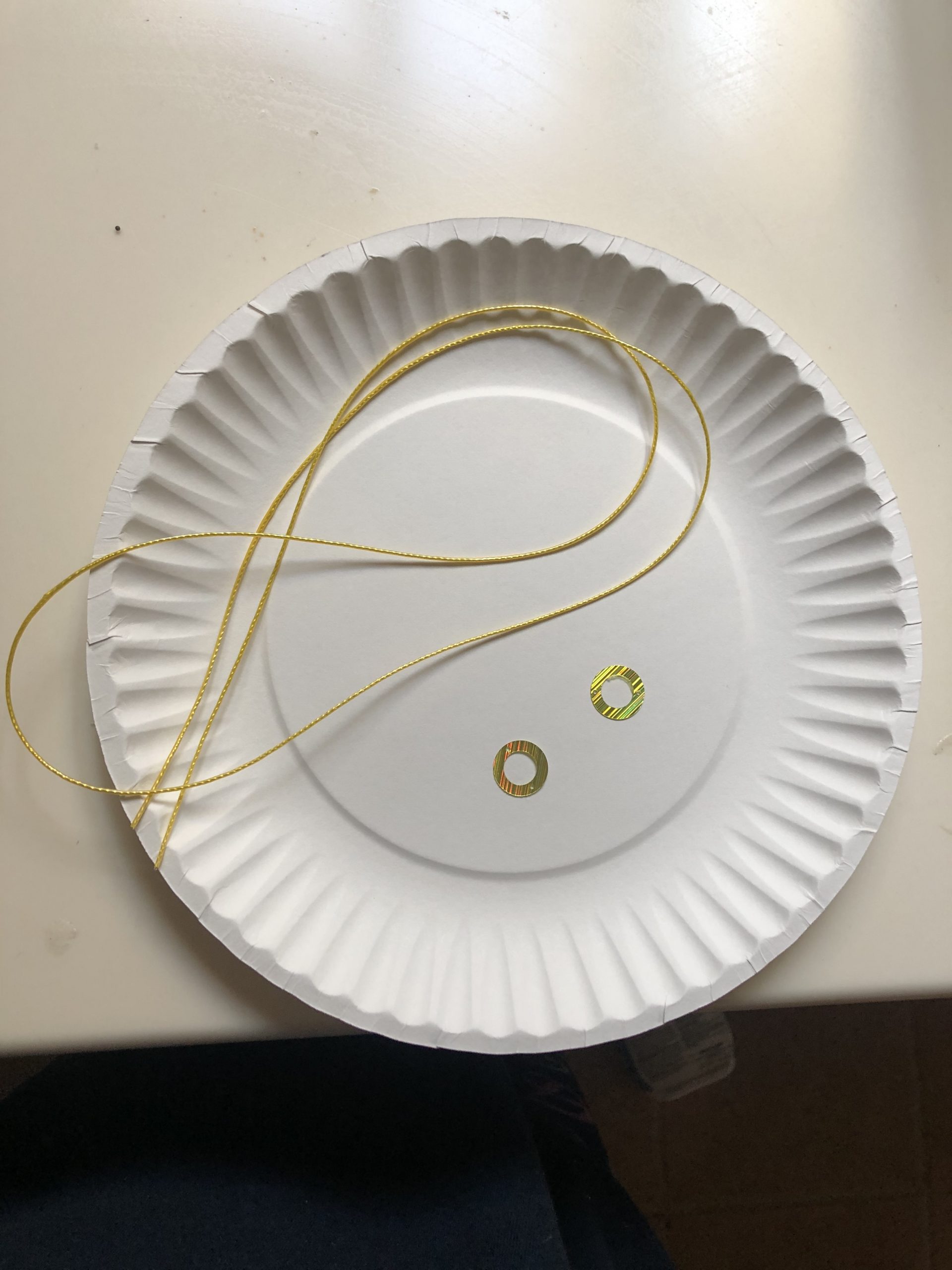 The materials I had to start out with- A paper plate, some twine, and some plastic rings

For the final version of the project, the food catching dish will be deeper and heavier, but similar in shape to the paper plate. The twine will also be stronger and instead of plastic rings, there would be hooks. The intent behind having hooks, is to make it easier for Jane to remove the dish to empty out the food.

To create these “hooks”: 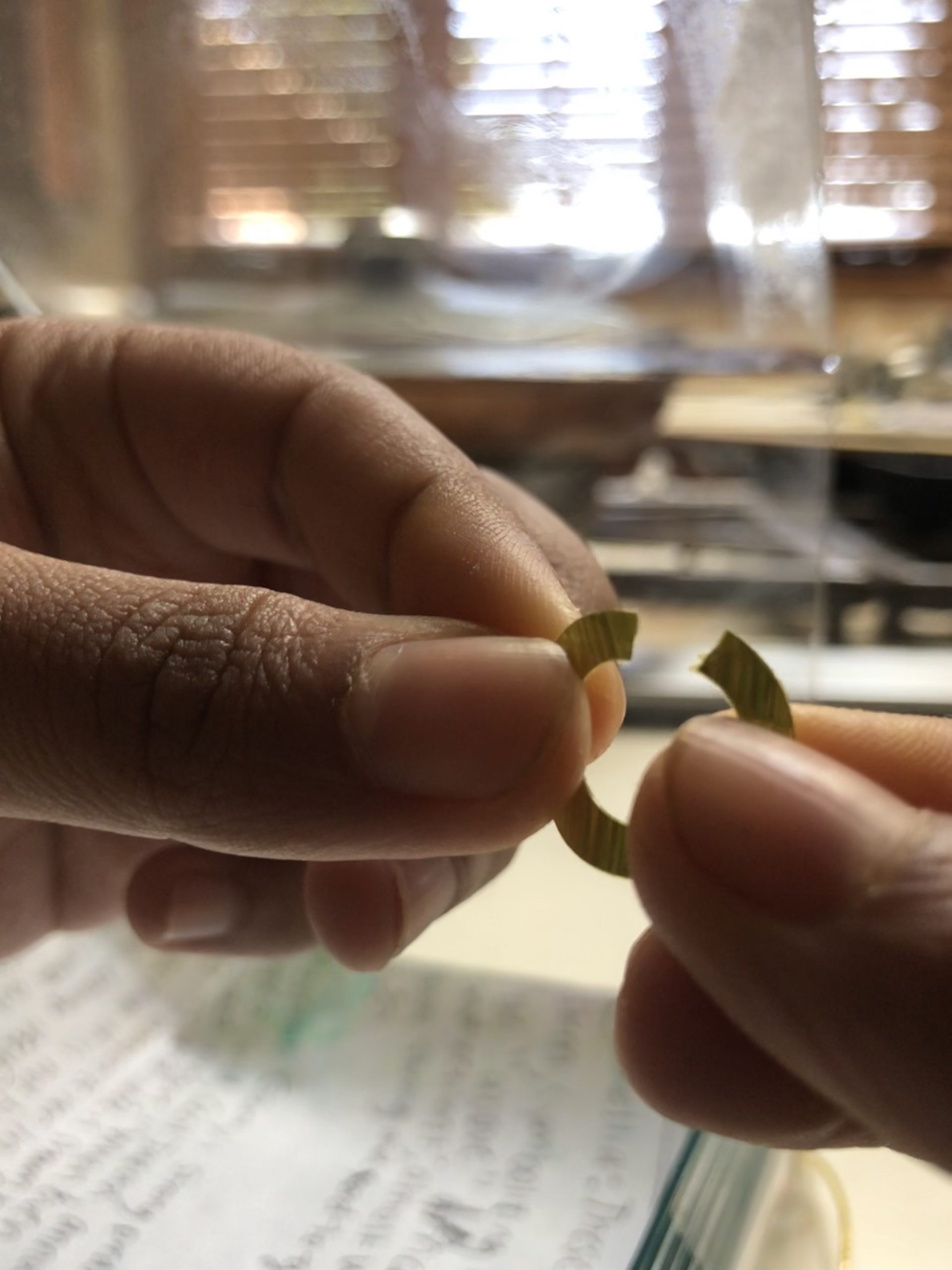 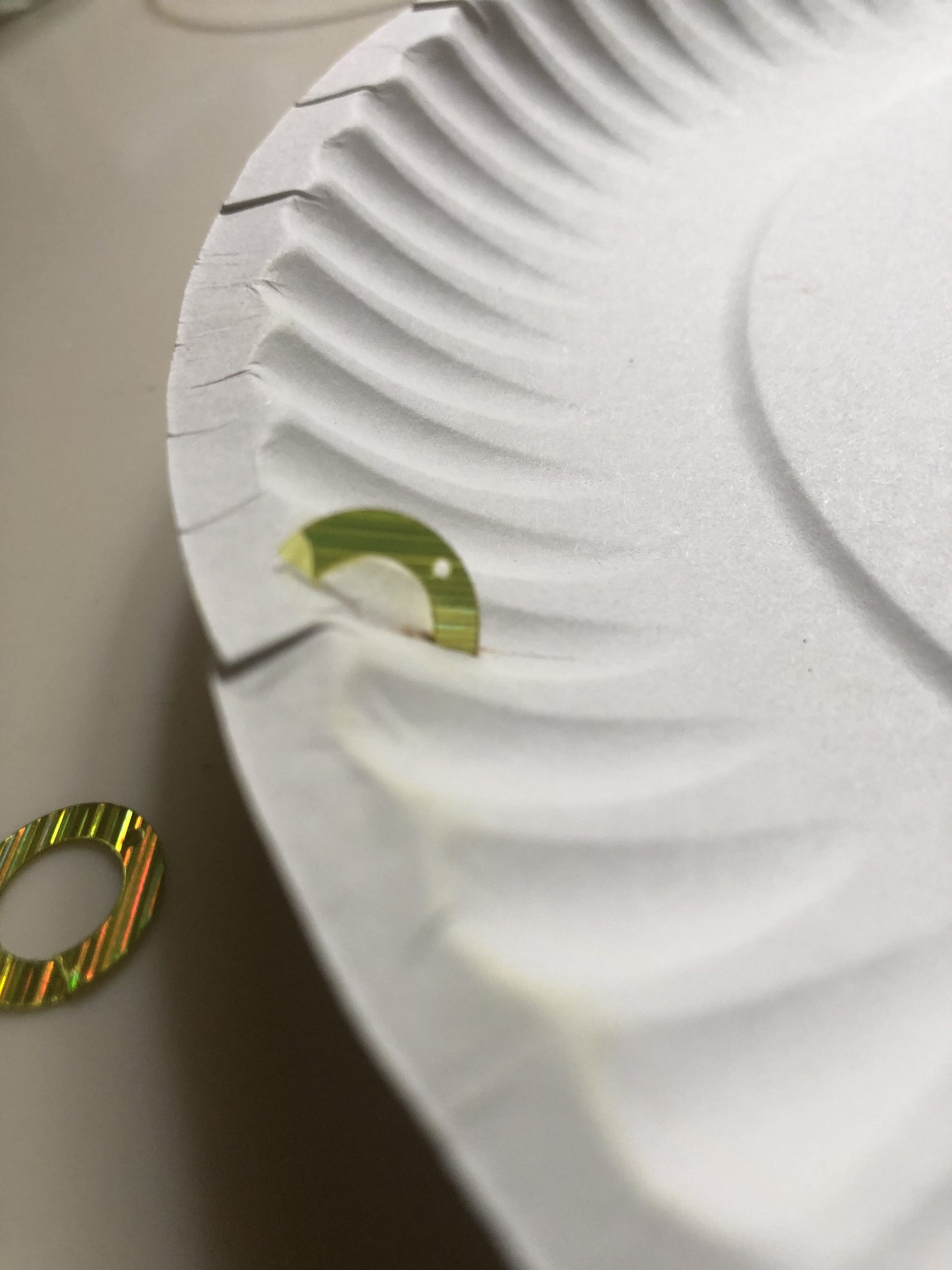 I made a slit in the paper plate and fit the “hooks” in.

Then finally, after tying the twine to these rings, I had this initial prototype: 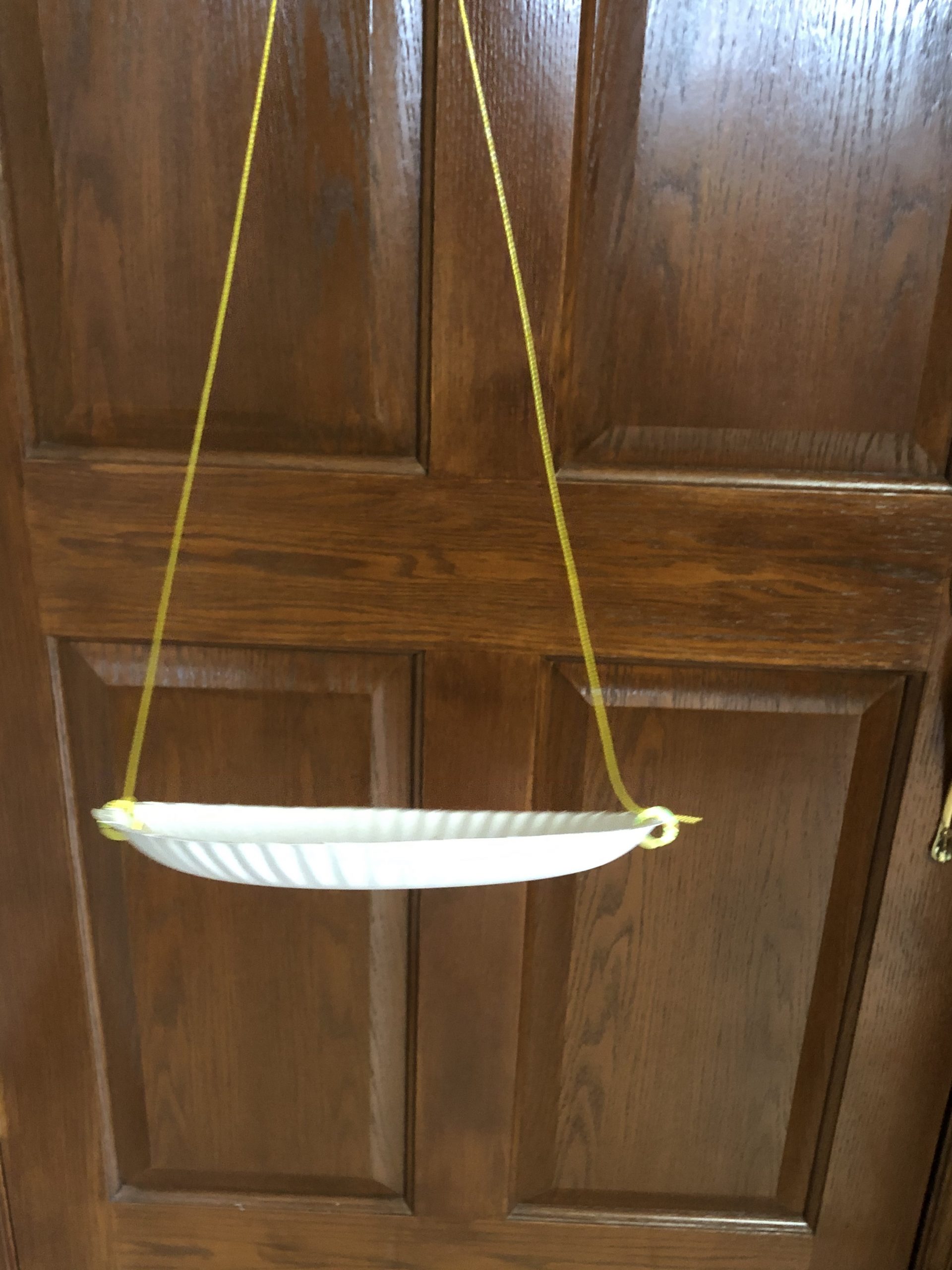 Initial prototype- only two points of contact with “hooks” and plate

At this point, I showed my prototype to my parents, who said that it was too basic and would not last 20 minutes outside in nature. Their main critique was that it was not durable and that I would have to use some very heavy duty materials for it to be actually usable by Jane. Another major concern was how it would handle the wind. If the wind blows too much the plate would tip over and the accumulated food would fall out. This would destroy the purpose of the automated birdhouse, since Jane’s initial problem was that the spilled food was attracting pests.  My reason for showing this prototype to my parents is that they have some experience designing and building products that are used in the real world. I wanted advice regarding the design of this dish and the question of whether this would be usable by Jane to be answered. The prototype critique gave me some ideas about how to attempt to fix these issues and all of the advice given was integrated along with these ideas in fixing the prototype.

The first thing that I wanted to integrate is more support for the dish. This initial version of the prototype had 2 contact points with the hooks on the plate. When bought out in the wind, the plate would tip sharply to the side. To attempt to fix this issue, I added 2 more contact points to the dish. This seemed to make the dish more stable and move in a more circular pattern when there was wind, rather than tipping over. In order to counter faster winds, there will be a heavier dish that is not that easily tippable in place of the paper plate. In addition to that, usability of the plate for Jane needed to be improved. In the first prototype, there were only “hooks” attached at one end of the twine so that Jane could clean out the dish very easily. Then, it occurred to me that there might be a time when Jane might need to unattach the entire dish and  put it back on. So, i attached hooks to the other end of the twine as well. Overall, the prototyping critique was very useful in improving my prototype and it surprised me how much could be change in such a simple prototype. 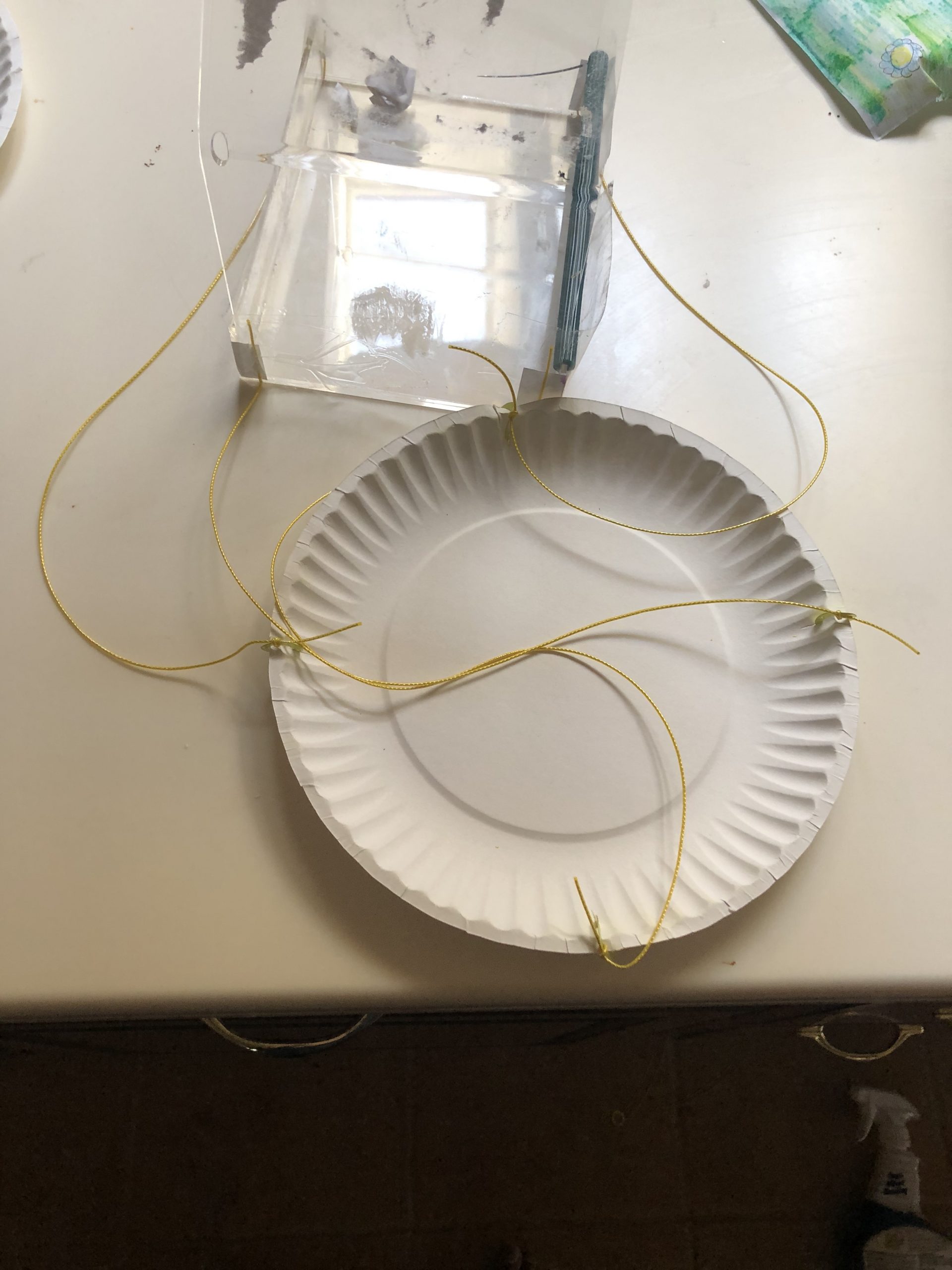 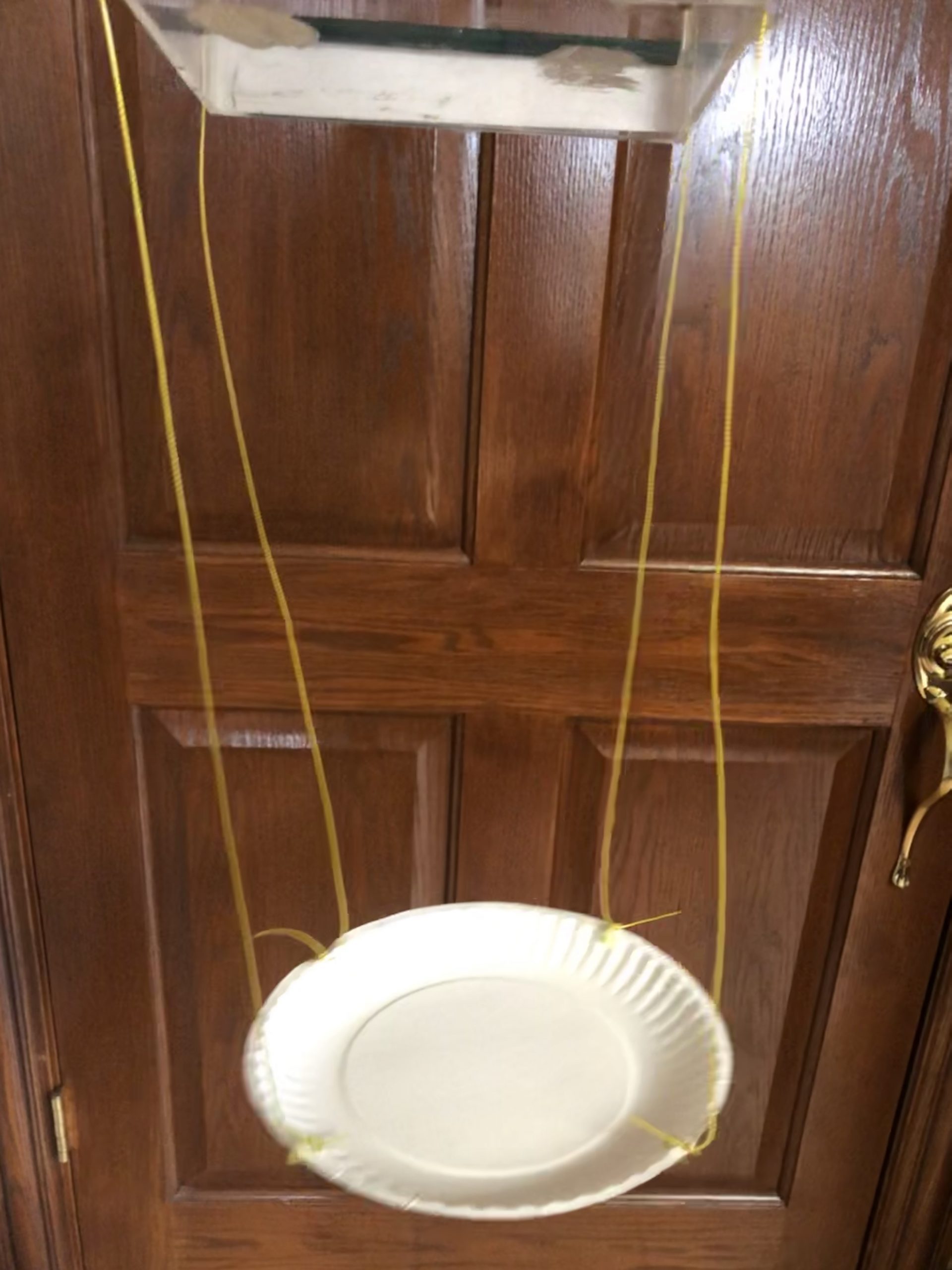 How the new prototype looks while hanging 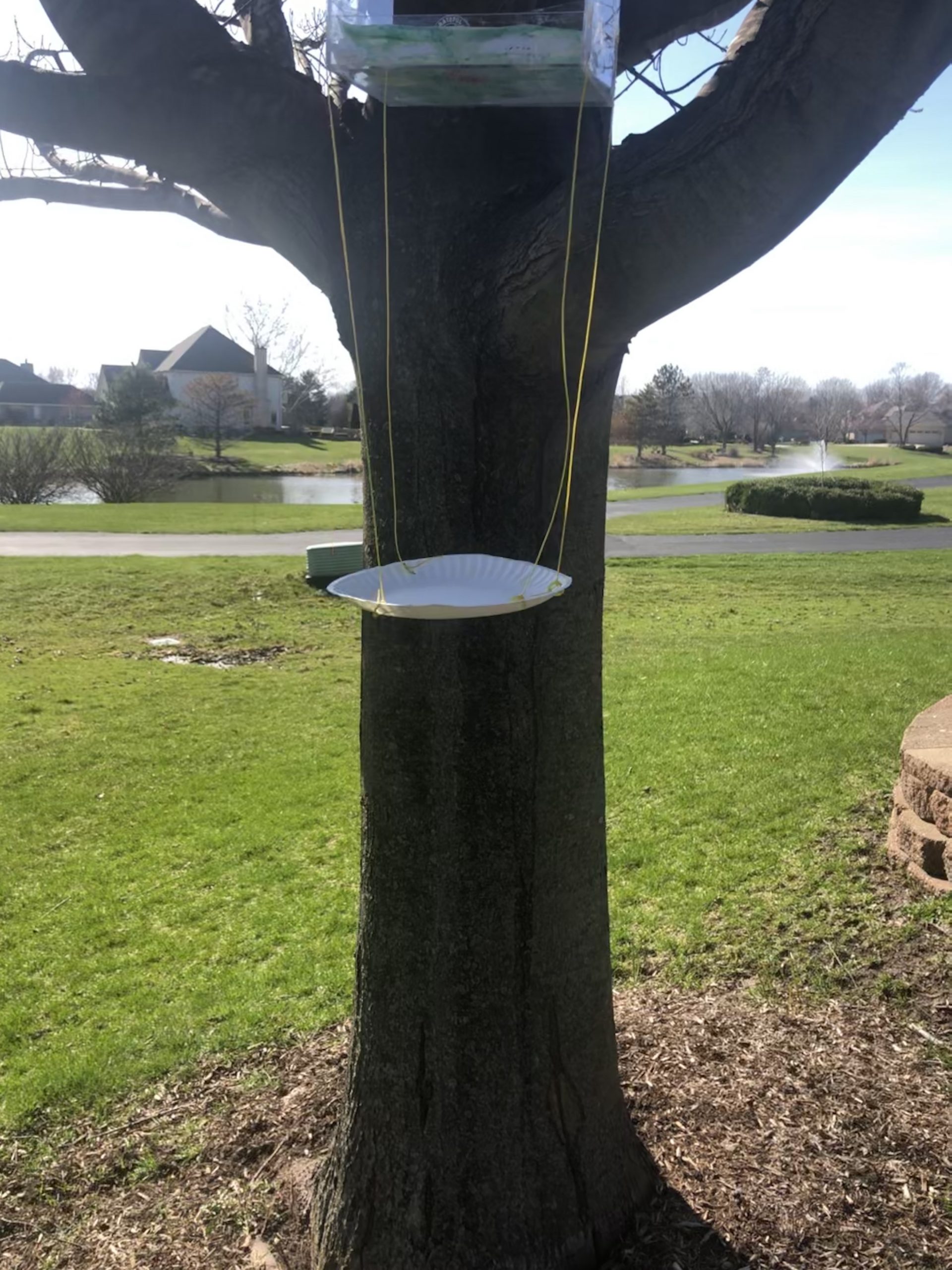 The new prototype hanging off a tree

Final prototype, hanging off of the tree, moving in a circular motion in the wind instead of tipping over

The “works like” prototype we envisioned was created in Tinkercad. It is supposed to function as an automated bird feeder. It will dispense food when a bird lands on a pressure plate. If food has already been dispensed, another pressure plate will be triggered and will prevent more food from being dispensed.

We built a prototype with Tinkercad that consists of an Arduino, two switches, motor and a breadboard. Since Tinkercad does not have pressure pad sensors, we used regular sensors to mimic the functionality. The prototype will spin the motor only if one switch is active at a time. In practice, this means that the motor would spin if only one pressure plate is active. The motor spinning will cause the bird feeder to dispense food.

After we showed Jane this prototype, she seemed to like the idea and didn’t have any critique for it. I do plan on improving the prototype by adding a delay before the switch triggers the food functionality. Currently, the motor will spin once the switch is activated. Another critique I have is what happens when the feeder runs out of food. The motor will spin if a bird is standing on the pressure plate and no food is detected on the pressure plate. So, if food runs out, it is possible for the motor to keep spinning if a bird stands on the pressure plate indefinitely. This could drain the power source of the device.

One surprise I encountered while prototyping was the lack of a pressure plate on Tinkercad, so I had to substitute the functionality with a regular flip switch.

Animation of the prototype in action 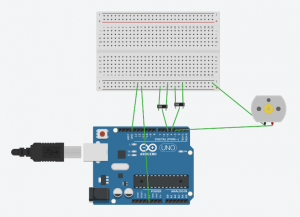 The final prototype in TInkercad 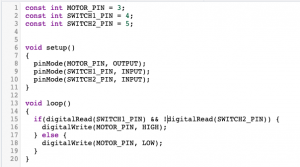 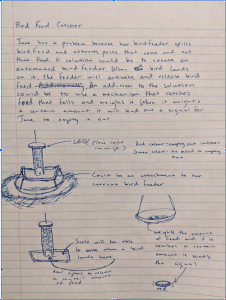 Drawing of the initial prototype 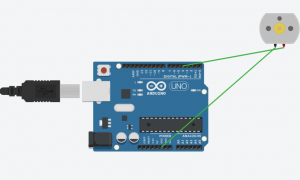 Prototype to test the motor spinning

The prototyping process was very constructive. We received a lot of helpful feedback for our prototypes that we can use to improve our product. We are already planning our next steps. For the works like prototype, we plan on implementing a timer so that the food doesn’t dispense immediately once the pressure plate is pressed. This will improve the functionality because currently the food is easily and quickly emptied. The looks like prototypes will be drawn out using CAD, with the necessary changes made to improve functionality. In the event that we finish the automated bird feeder with time to spare, we plan to build a system that notifies Jane when the nectar in her hummingbird feeder needs to be replaced, depending on the temperature and humidity. Jane has multiple kinds of bird feeders, and it is very important to always leave out fresh nectar in order to attract hummingbirds.

Through this process, we learned that prototyping remotely can be challenging since we are unable to physically interact with the prototype. This is a significant part of the process since you have to be able to feel and use the device in person to critique it thoroughly. Additionally, we are unable to physically put each person’s contribution together. Thus, it is difficult to conceptualize and demonstrate how the pieces will fit together when designing the product and receiving feedback on the prototypes. We are making the best of this situation with extensive communication and collaboration. Many pictures and physical demonstrations over video call make it easier to work on. We are continuing to work on our automated bird feeder, and we will be using plenty of communication to create the best product possible.