Device Function: The core of this device is a scale that weighs the amount of water in a bottle and updates how much of your goal you have reached based on the difference in measurements. 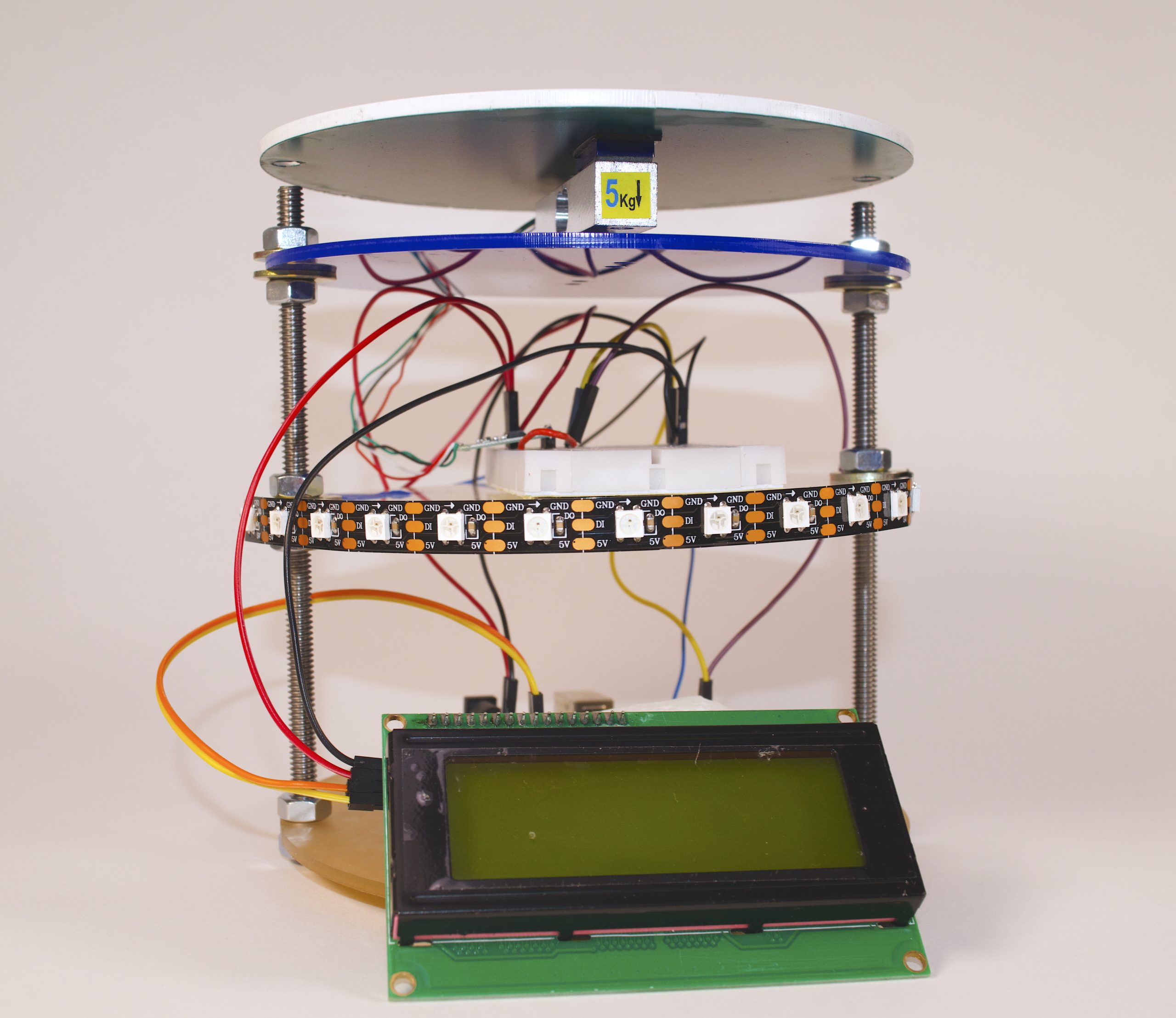 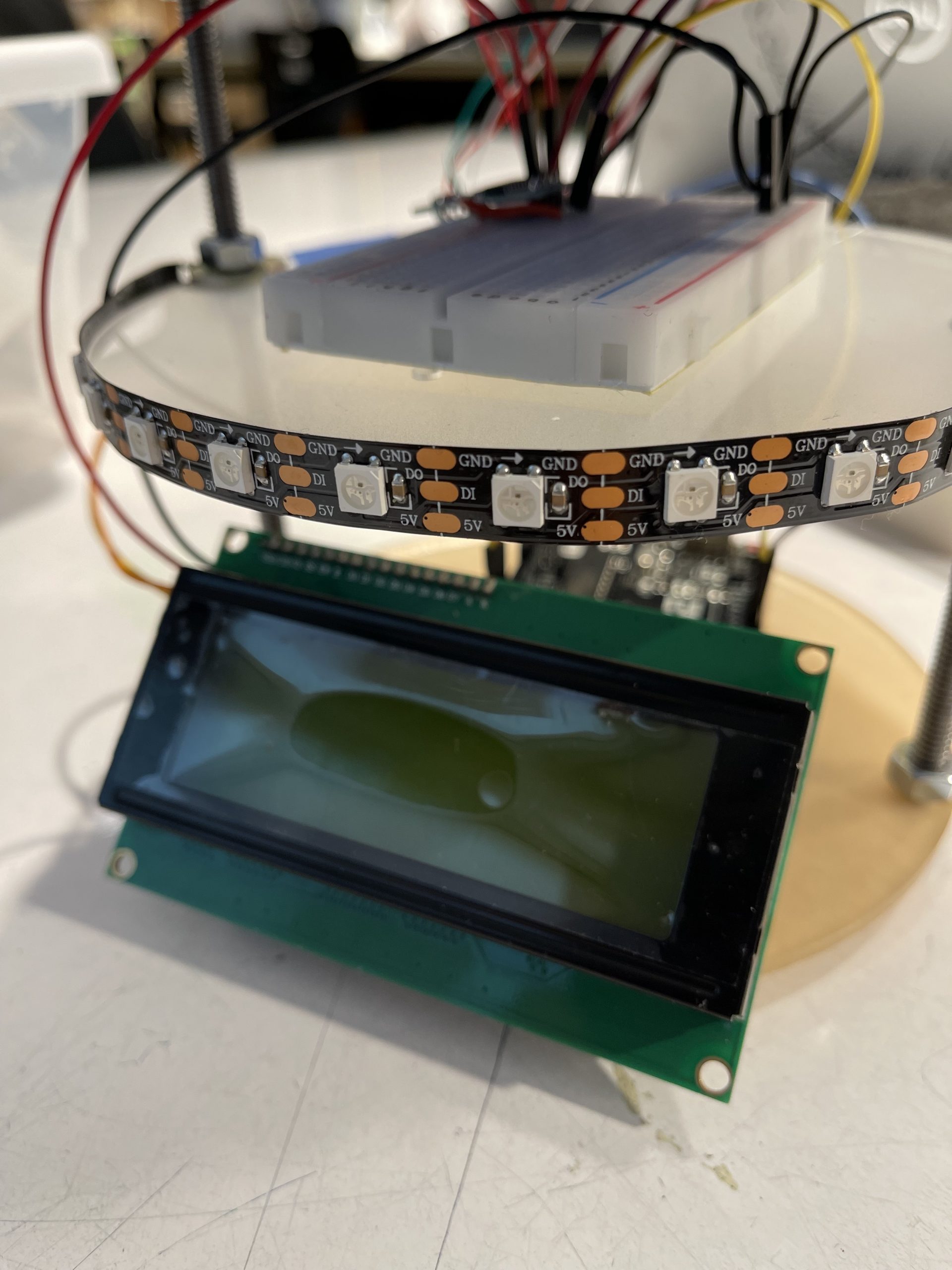 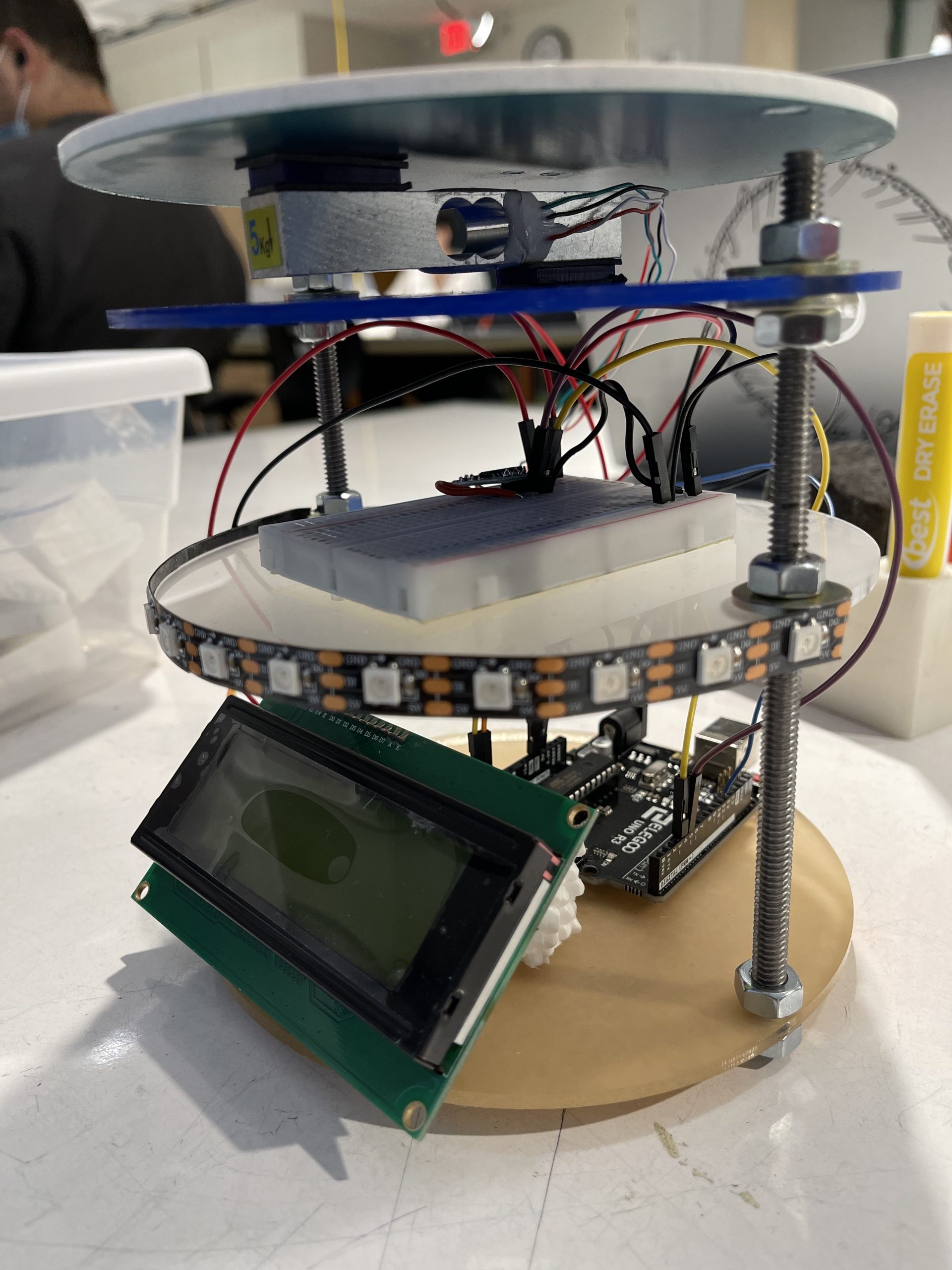 One of my focuses for this device was to make it visually appealing. I did this by creating a separate space for each component of the device. Arduino at the bottom, breadboard in the middle and load cell at the top. 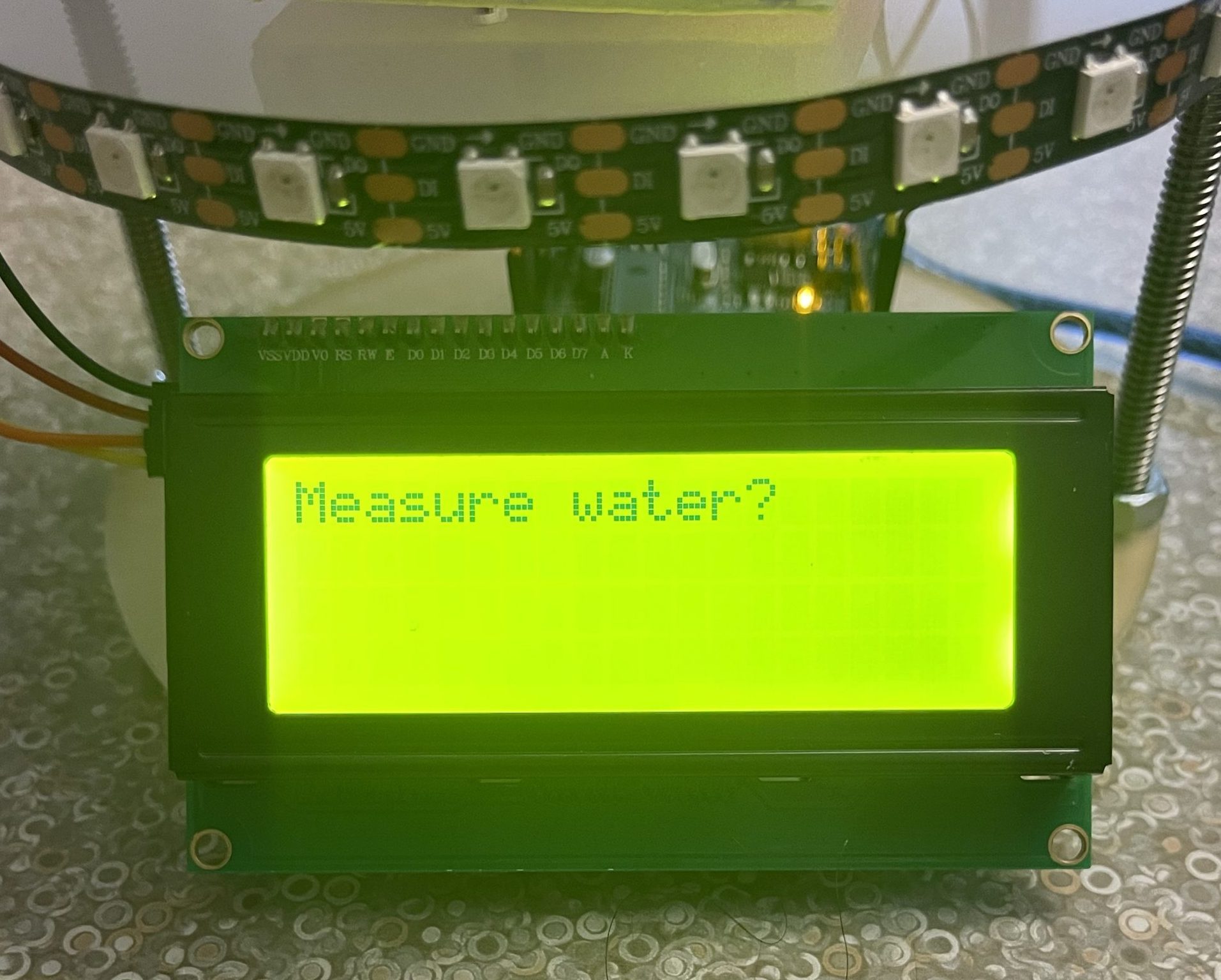 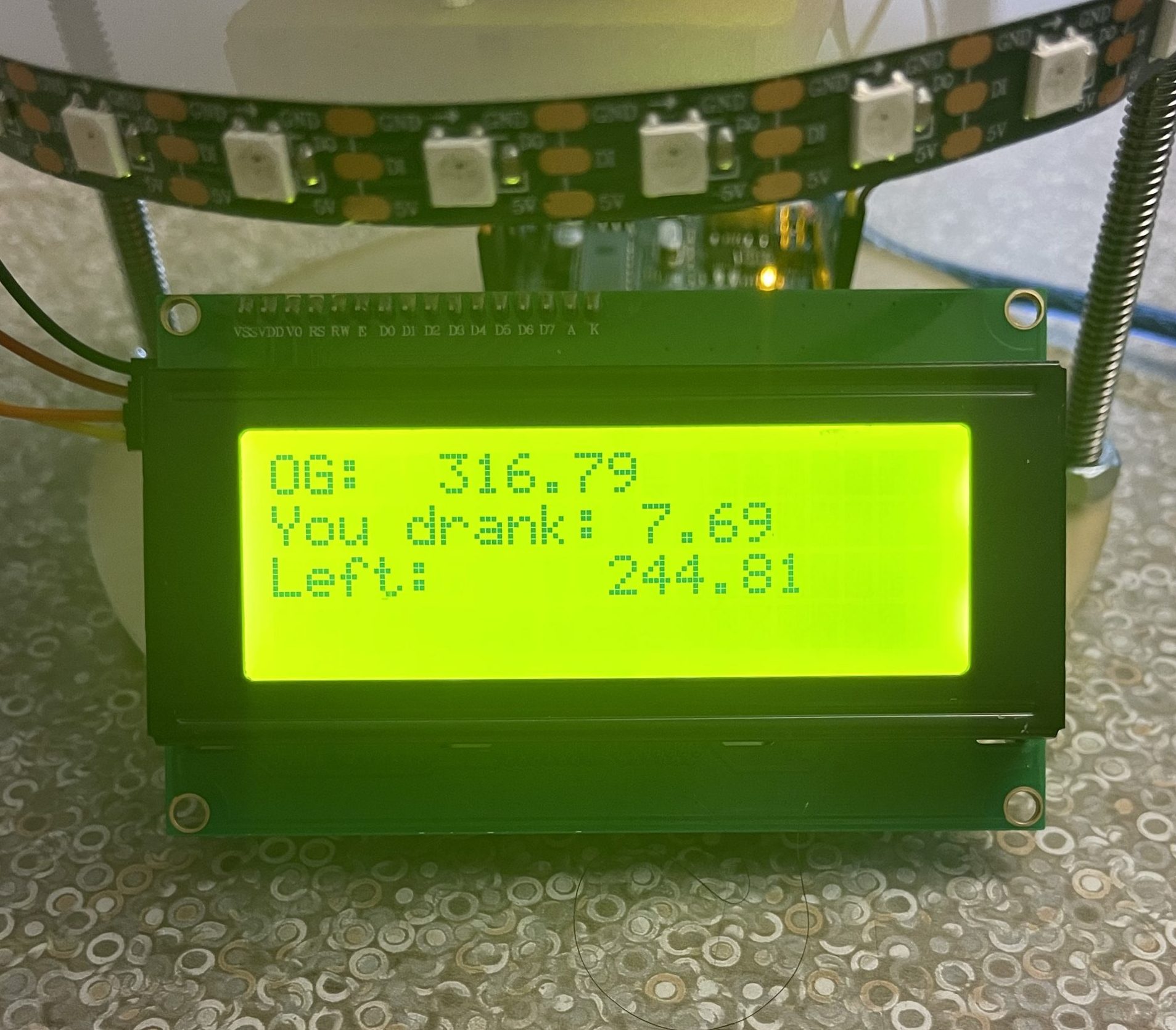 After answering yes on the serial monitor, the LCD display shows how much water the user had and how much they have left to reach their goal. 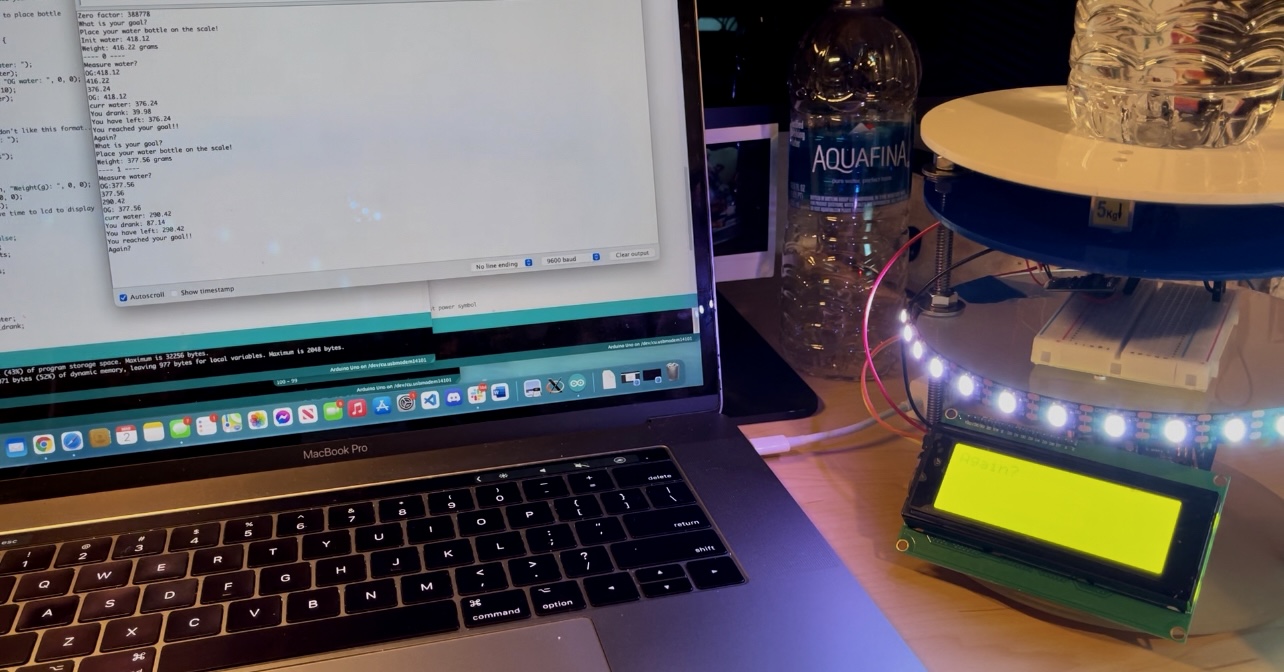 Once the goal is met, the LED strip turns on and the device asks if the user wants to restart.

Decision Point 1:  When I first designed my device, I had thought that my plates only needed to be half an inch wider in radius than my personal water bottle. I laser cut three plates according to my intial sketches but soon realized that these plates were too small. Although they could still hold my water bottle, I realized there wasn’t enough space for all my electronics and that when the bottle was placed on the device, it wasn’t pleasing to look at. To fix the issue I cut larger sized plates and printed 4 plates instead of 3 plates. I now had enough space for the Arduino and breadboard and was satisfied with the overall aesthetic of my device with this change. 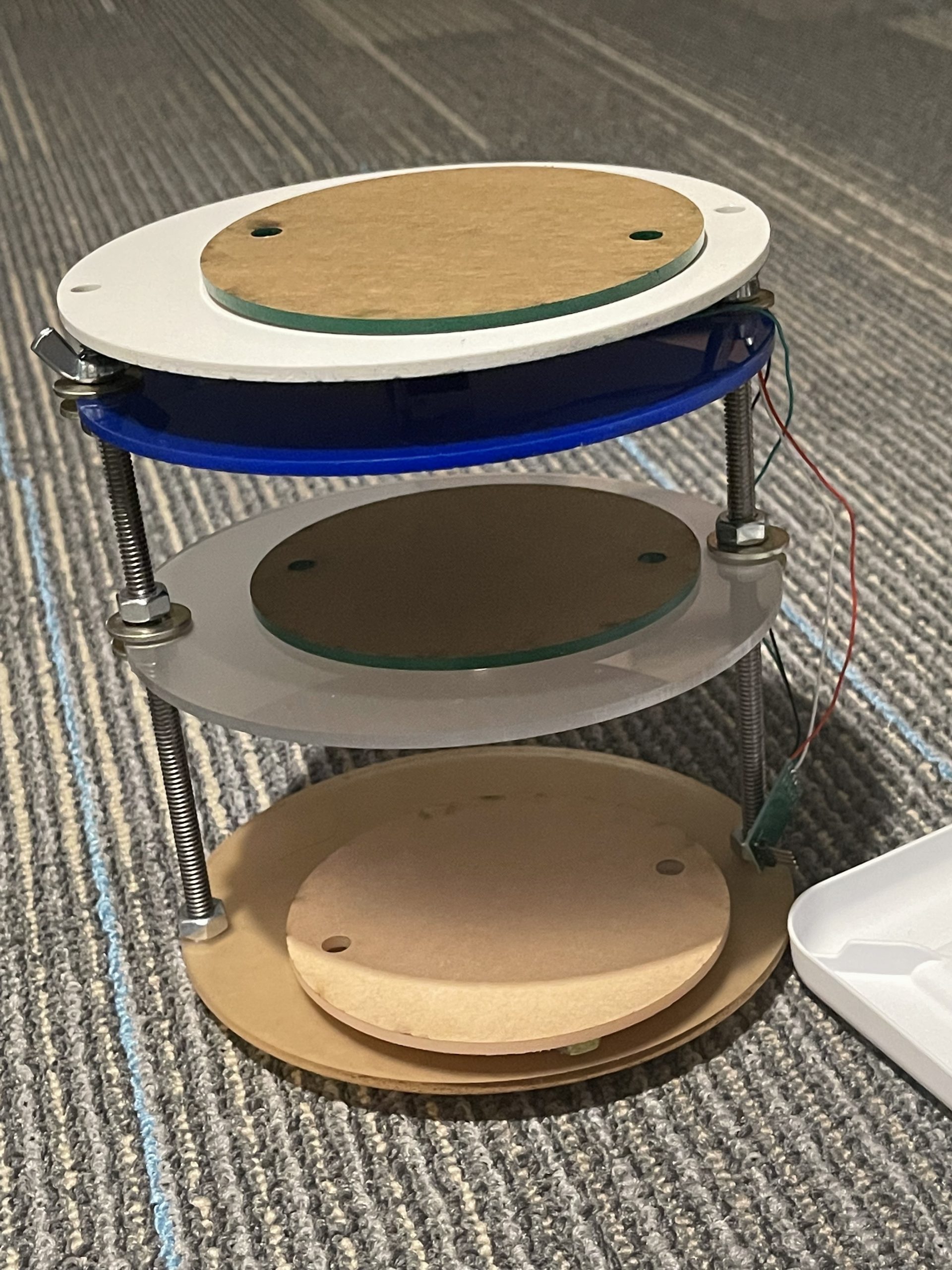 This shows a comparison between the original smaller plates and the larger plates cut after revision.

Decision Point 2: I had mainly worked on my device using a temporary 1kg load cell while I waited for a 5kg load cell to arrive. It turns out that the measurements of the 1kg load cell were not the same as the measurements on the 5kg load cells. But given that there was not enough time to re-laser cut the plates that would hold the load cell, I decided to move forward using double sided sticky tape. Unfortunately I could not demo my device using my personal 40 oz water bottle as the double sided sticky could not keep the plate sturdy with heavy objects. Fortunately, with a standard sized plastic water bottle, my device still worked as intended. 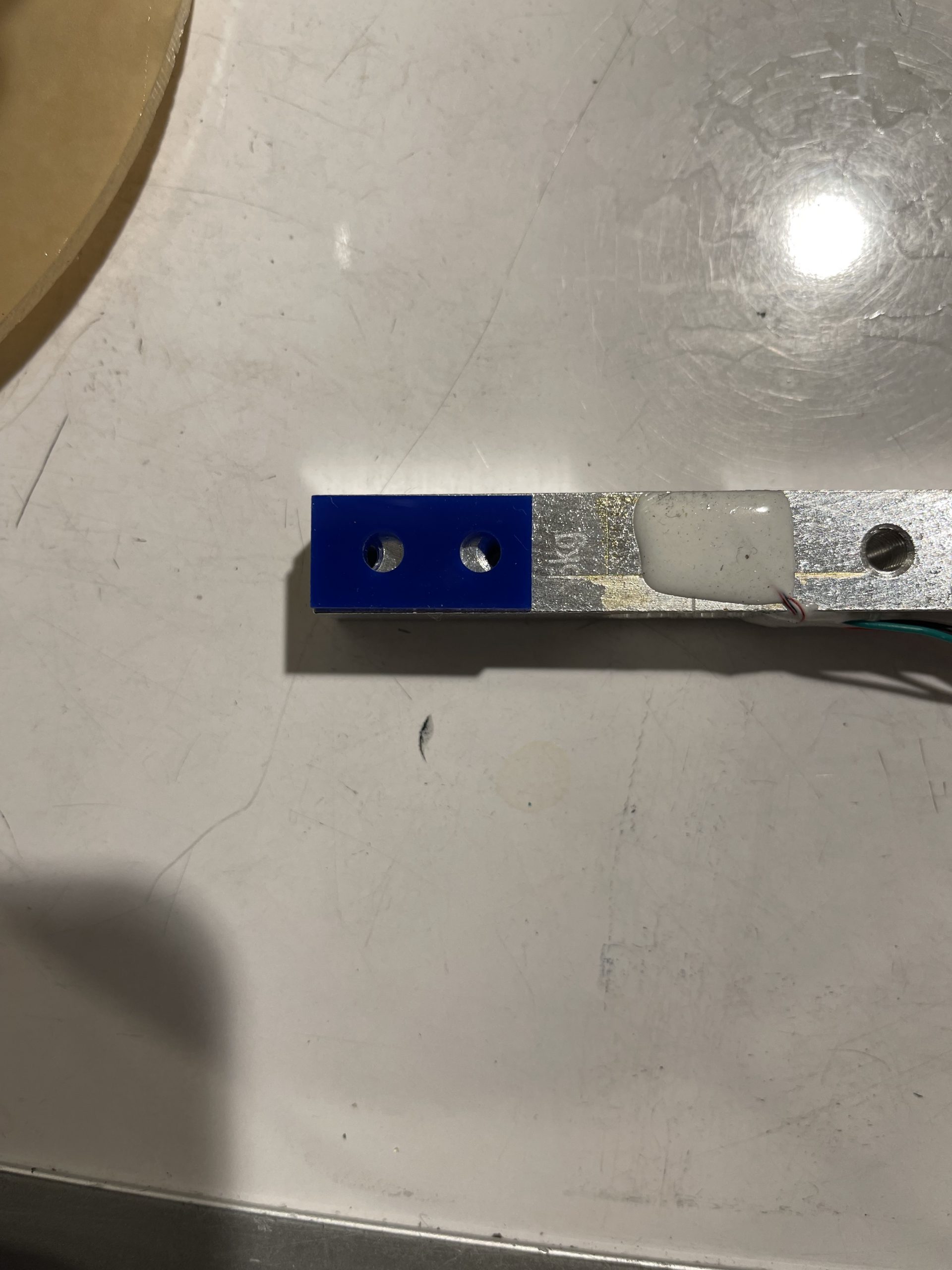 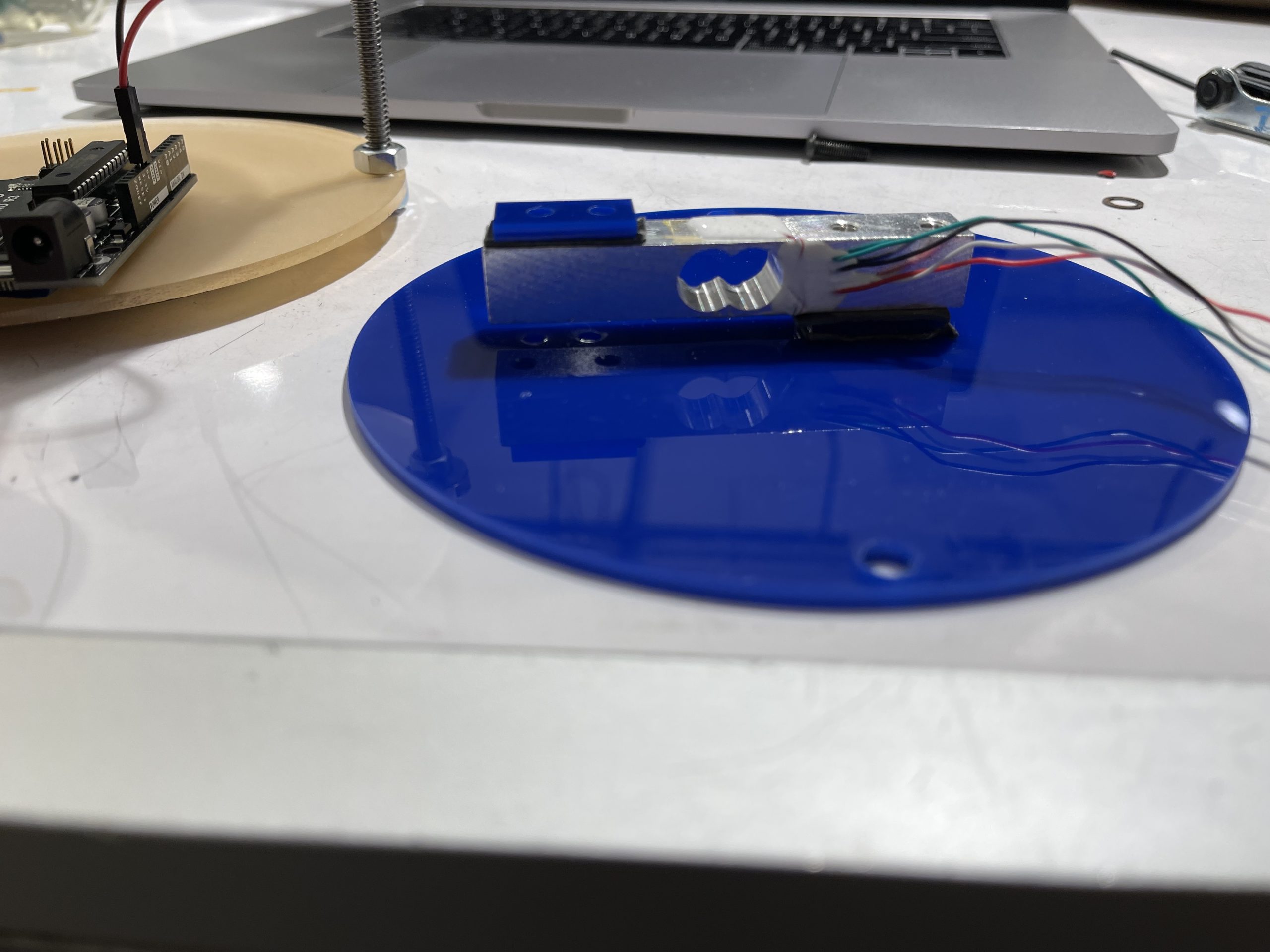 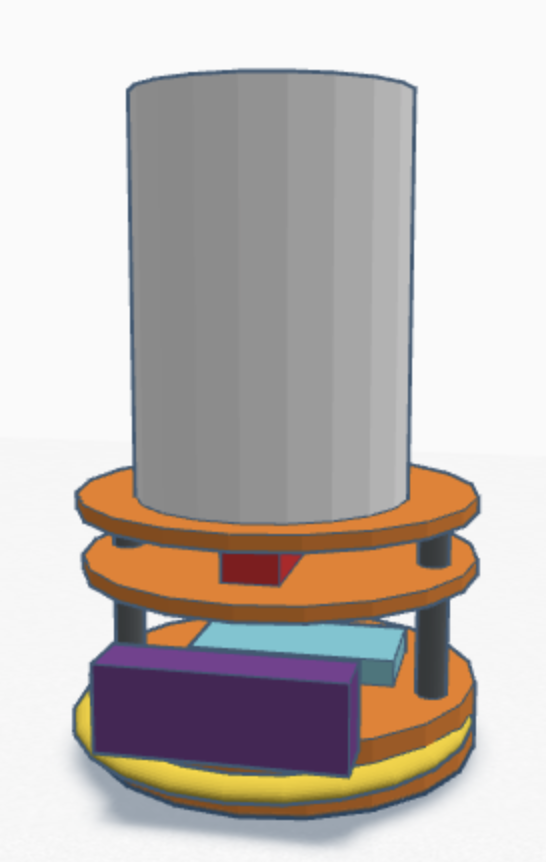 First Design on TinkerCad
The bottom plate was supposed to be thicker to attach LCD and LED strip. Everything including the support bars were to be 3D printed. 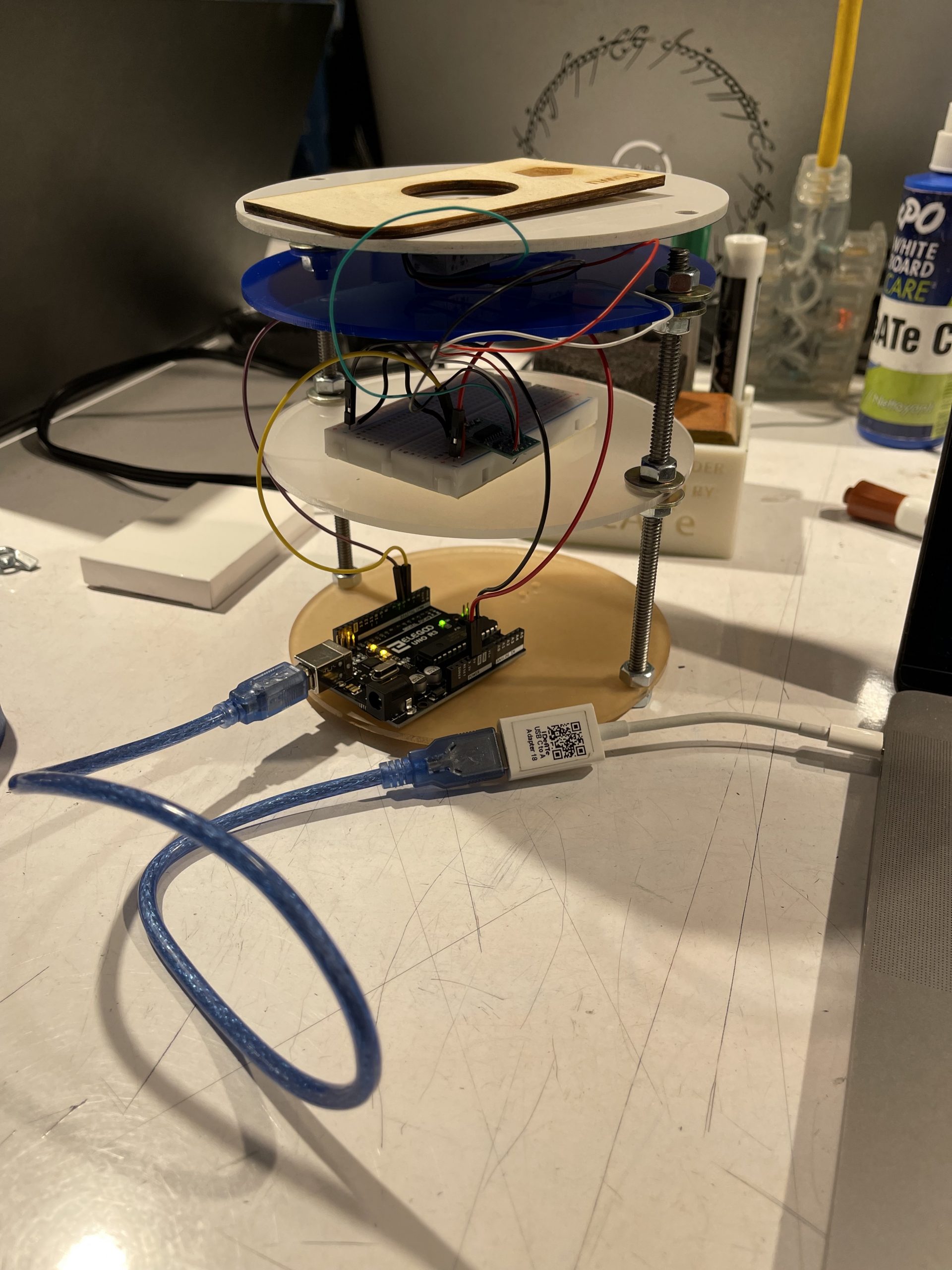 Second Revision
Progress after changing the plate sizes. At this stage I was testing with the 1kg load cell. There was no led strip or LCD display. 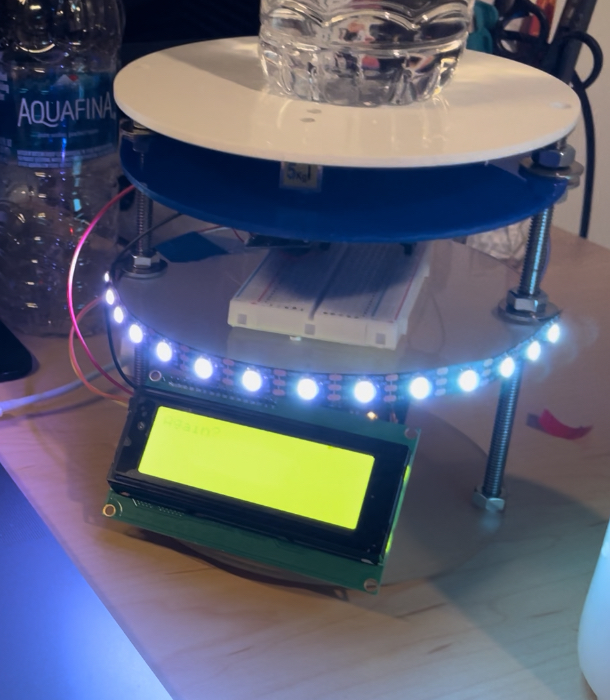 Final Revision (before load cell change)
I added an LED strip, the LCD Display and secured all electronics to their respective plates. I also started testing using an actual water bottle.

I agree that my device would be “convenient and easy to use for college students”. In fact my inspiration for this project came from the fact that I tend to forget to drink water as I do my coursework. And so having something portable and on my desk makes it easier to remember. Many comments pointed out that the device looked unstable. One person suggested to “add more pole supports to make the device more stable since it looked like it would tip if the bottle wasn’t put right in the middle”. Along with this suggestion I would also use a better supported load cell. As I mentioned above the use of double sided sticky tape was a large reason why the device was unstable. Adding extra poles and bolts would definitely help. Overall I’m glad many people liked the use of plates to make the device look cleaner and aesthetic as that was a large goal of mine.

I am happy with my project but I’m not completely satisfied with it. I think that despite my negative thoughts that I will not be able to complete this project, I still met my main goals. For that I am very proud of myself. Originally my idea was for my device to take all measurements by itself and have a more attractive LCD display. The current version of my project is more user dependent and heavily relies on the user to take measurements and function as intended. Going forward I would like to remove this reliability or at least integrate it within the device rather than an external computer.

I learned that I could apply my programming skills to actual products and not just assignments in my classes. I found the coding for this project especially difficult because the load cell takes continuous measurement. I had to be in control of which of the stream of readings from the load cell to use for calculations. I worked around this issue by adding a user interface through the Serial Monitor. I asked the user when they wanted to take a measurement and only when “yes” was entered did my code move forward with the program.

I also learned that all is not lost if things don’t go as planned at the last minute. I was very afraid when I received my demo load cell the day before the assignment was due and found that my laser cut pieces don’t align with the load cell holes. Instead of using screws, I went with double sided tape and found that my device still worked. In the future though, I want to take this as a lesson to have my parts ahead of time. In general I learned that its important to set milestones and work with what you have each step of the way instead of waiting to perfect everything. This way I’m not crunching for time and stress less.

I would like to make another iteration if I have the time and opportunity to do so. Given that I do have both, I would like to remove the user input from my laptop and instead add buttons to the device for user input. I would also change the LCD display so that it shows a visual icon (like a battery) to indicate how much of my goal I have met. I would also laser print the plates again so that I can bolt the load cell rather than use tape. 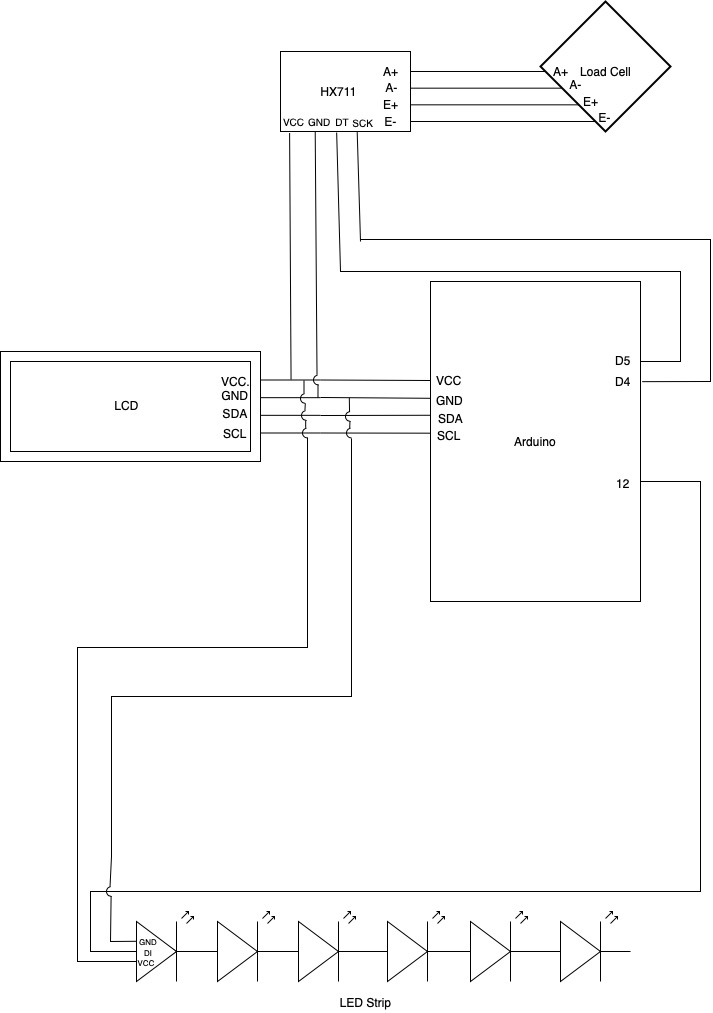 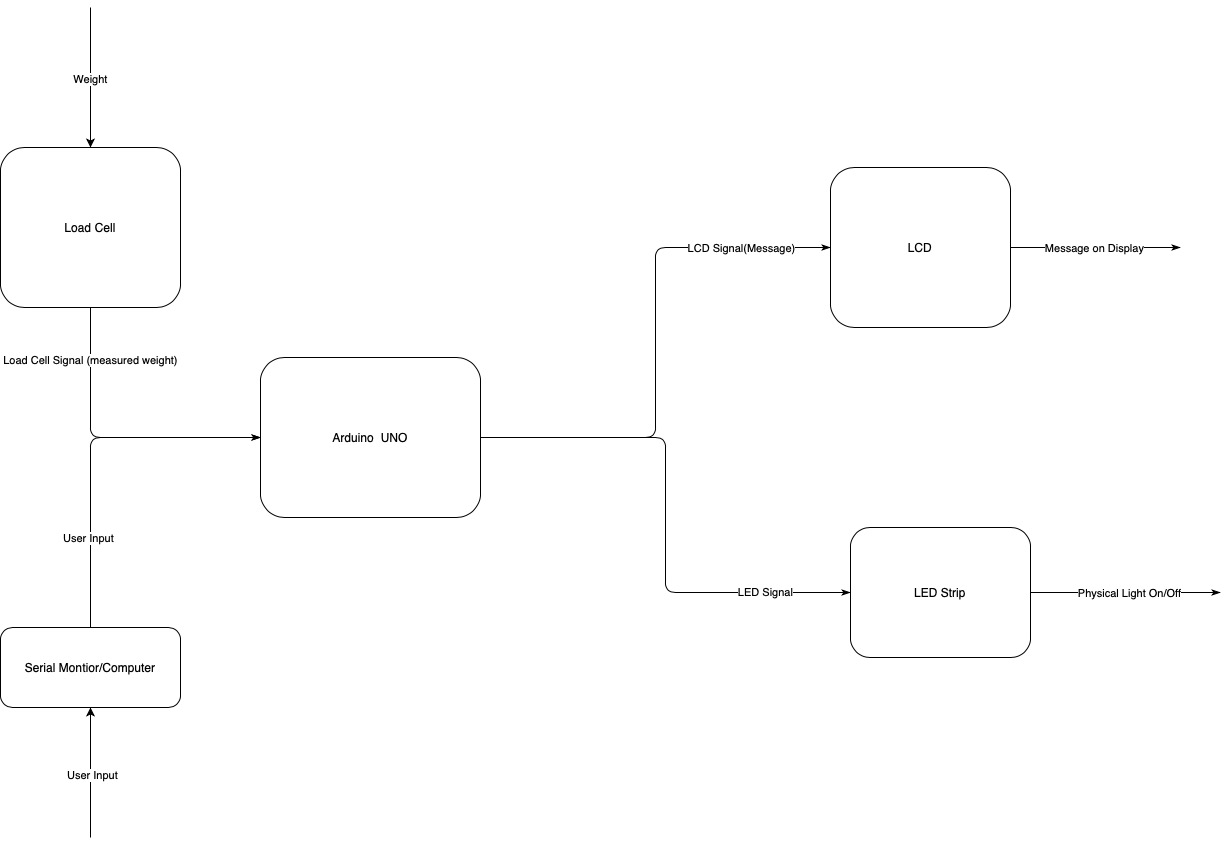