This class teaches students how to design and fabricate mechanisms that utilize Arduino/small electrical components. This project was intended to allow students to interview a client with a disability and then with their help find an opportunity to improve their day-to-day life with a product. You can see how our interview went here.

Our project is designed to allow our client Allie to type a price into a keypad and then have the amount of money they need to be dispensed to them as well as the amount of change left over displayed. This cash dispenser can be attached to our client’s wheelchair. There is also a reload mechanism that allows our client to reload the machine with money. Our specific device was designed to dispense $10 and $20 bills. 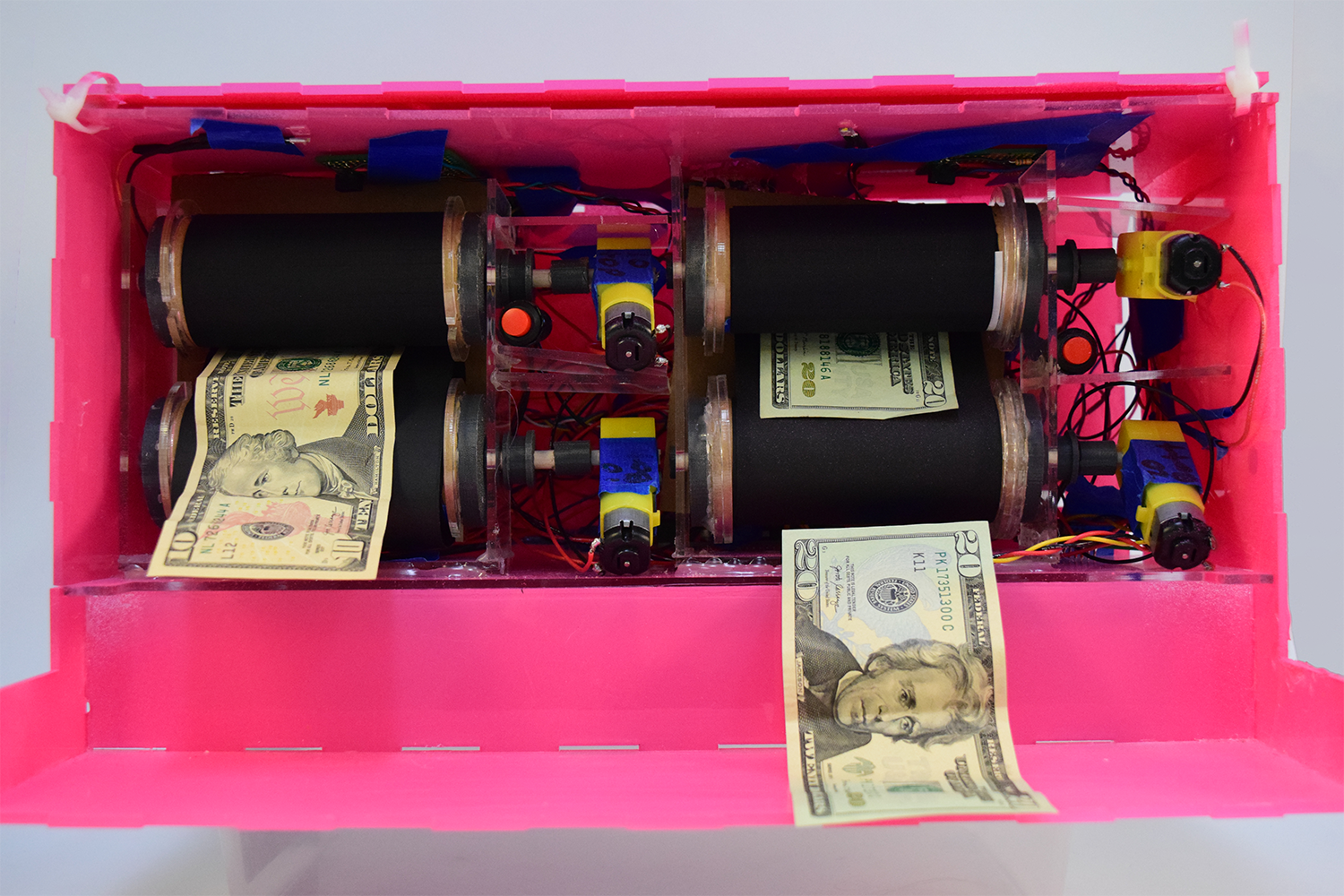 A general view of our machine. It is a pink box with two sets of money rollers inside. Each roller compose of two tubes covered and connected by a black fabric with two motors attached to the right side. 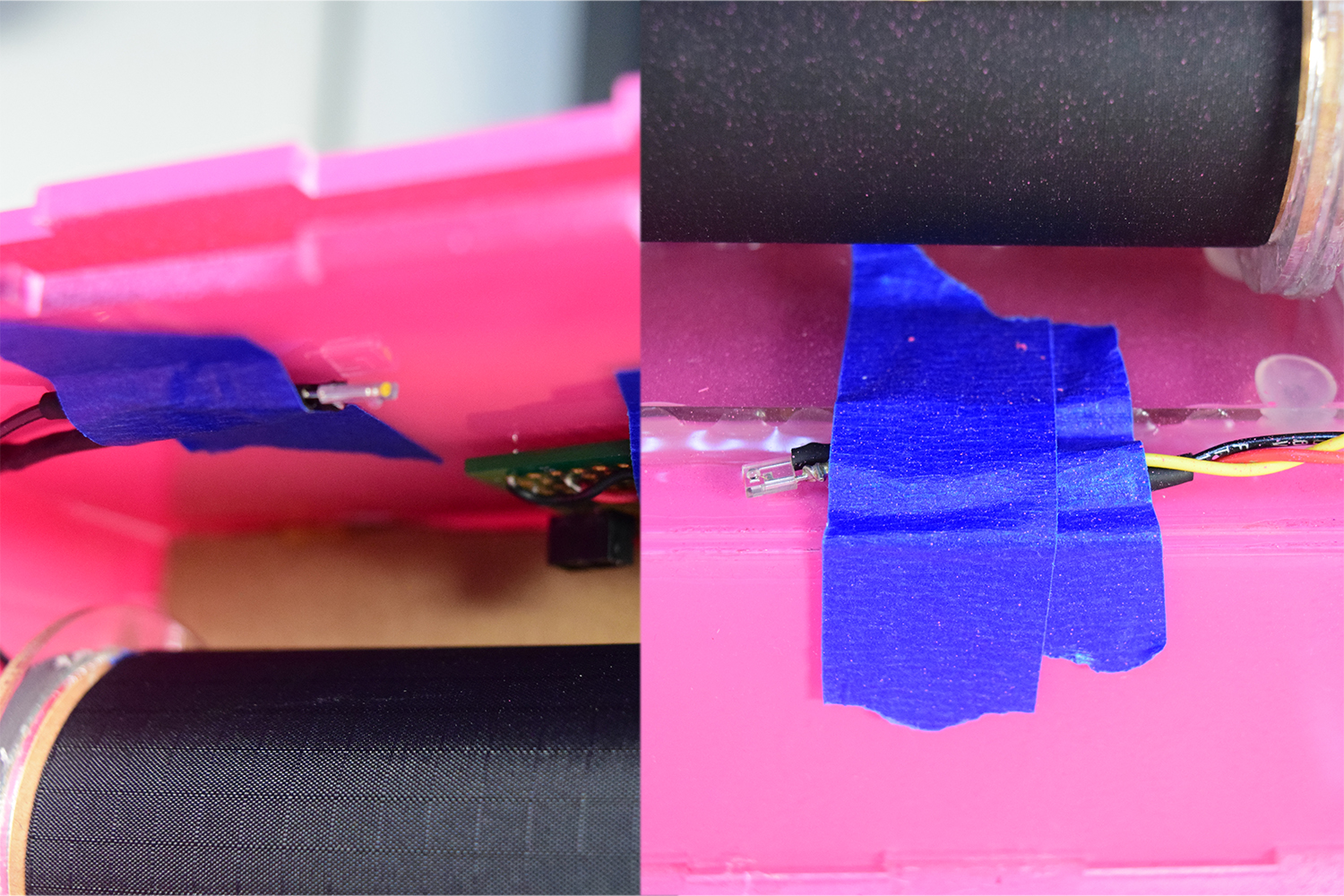 Infrared Sensors are depicted on the left and Infrared Detectors are shown on the right. These pair of sensors get blocked by the bills dispensed by the module and once the bill stops blocking the infrared light, the Arduino adds one to the amount of bill dispensed. 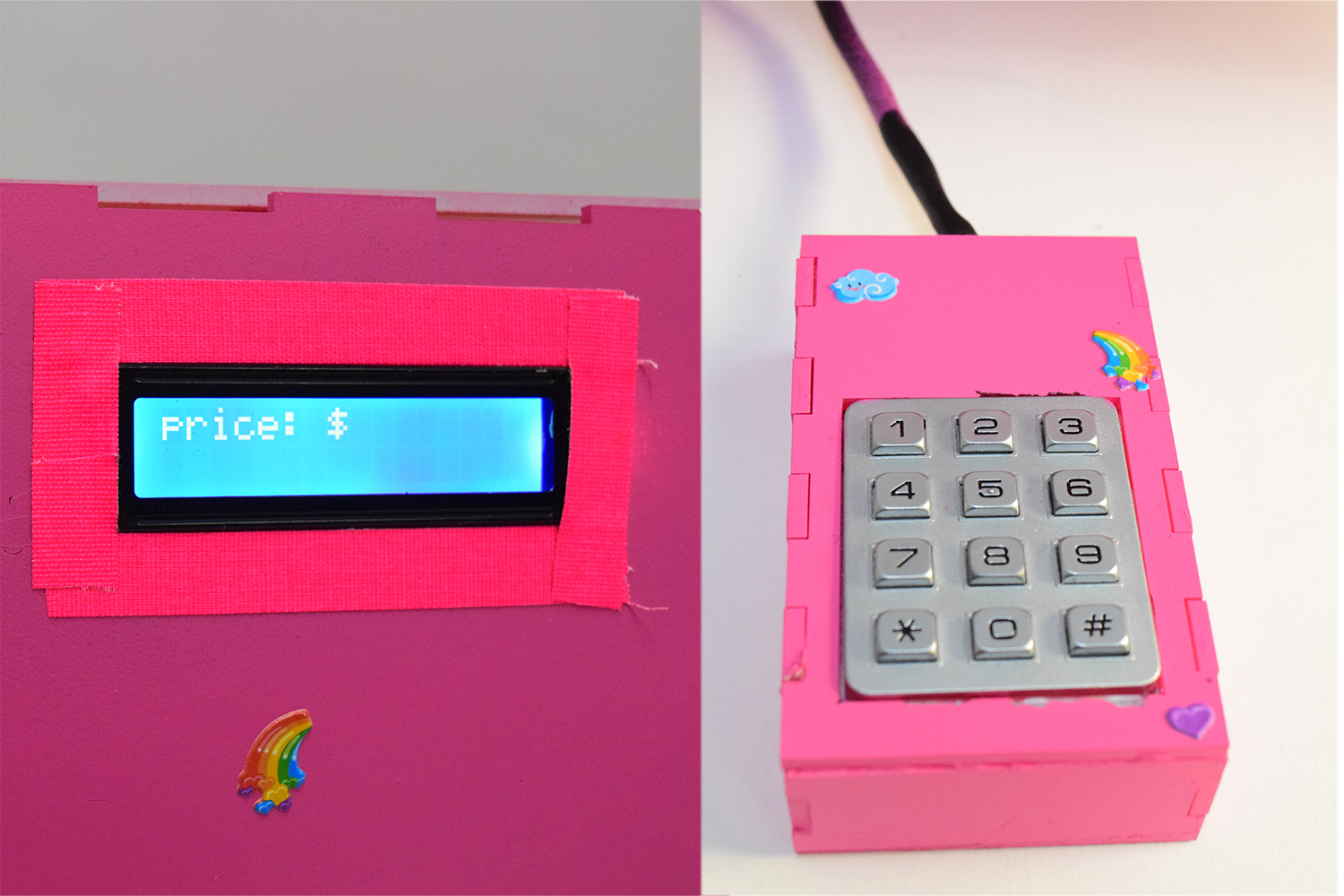 An LCD display is shown to the left with “price: $” printed on it, a keypad installed in a pink box is shown to the right with the numbers 0 to 9, a star key, and a pound sign arranged onto it in a 3 by 4 matrix. When a key is pressed on the keypad, the display shows the updated number and when done, the user presses the pound sign to enter the price needed to be dispensed. The star key is used to delete unwanted numbers.

A red push button is placed to the right of the money roller. When this button is pressed, both yellow motors attached to the rollers will begin driving (the top one drives faster than the bottom to ensure the fabric doesn’t create slack between the rollers) to reload the money. 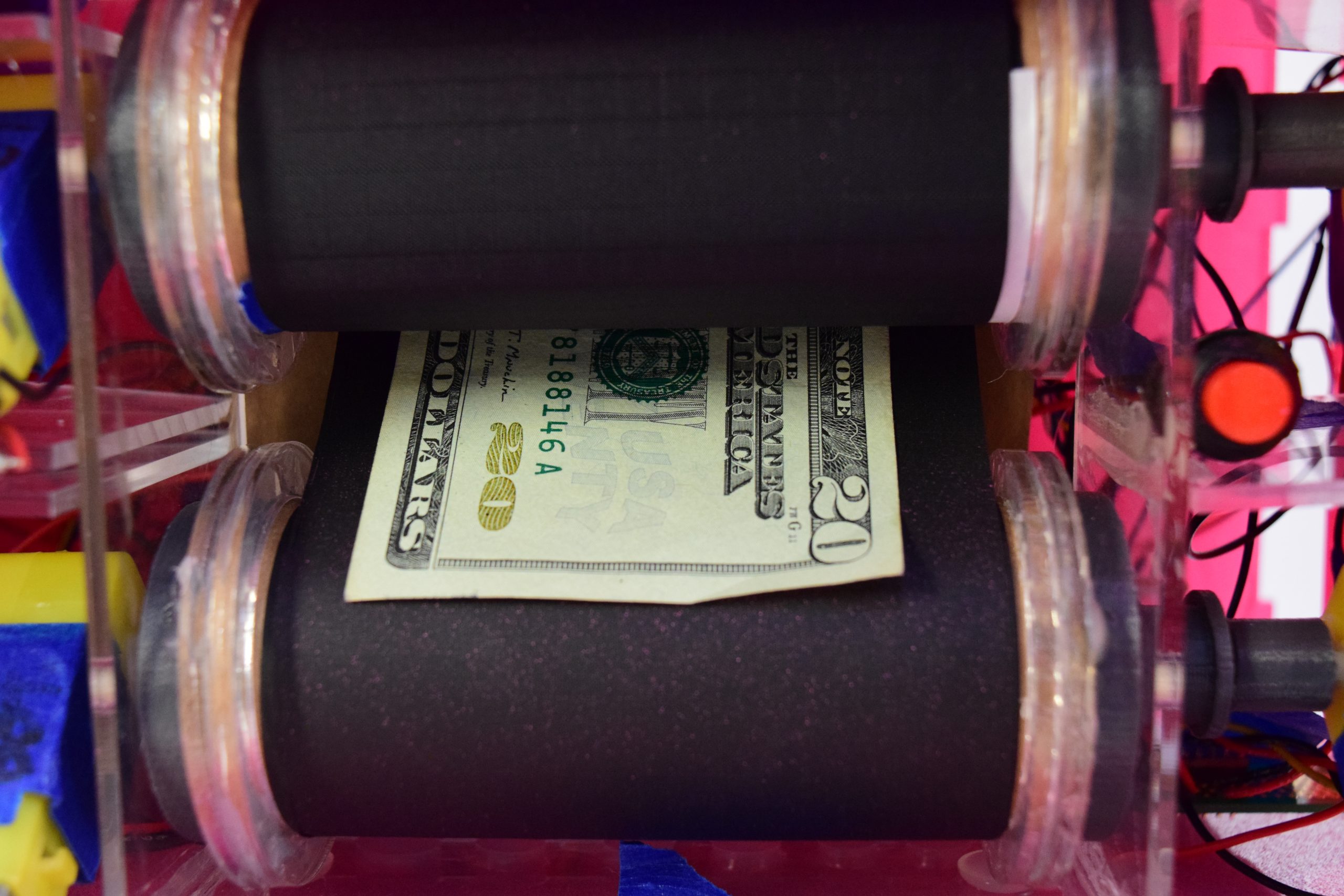 A bill is shown being dispensed by the money roller module. The module is made with two tubes and a black fabric that wraps around both of them. Bills are stored between the rolled-up fabric and motors are driven to dispense and reload the bills.

A video that demonstrates the entire process of dispensing money from the view of the user.

A video that demonstrates the entire process of dispensing money from the view of the shop clerks.

When Allie goes out shopping and is about to pay for her groceries, she would turn to the Money Dispenser sitting on her desk on top of the wheelchair. She types in the price of the item using the keypad and the motors run and dispense the correct number of 10- and 20-dollar bills. The display screen reads the change Allie would get back. When Allie gets home, she and her helper would unlock the cabinet in the front, and then press the red button which says reload 10s and reload the 20s to reload the machine for purchases in the future.

How we got here:

This prototype was designed to help answer the question: how to most effectively dispense only one bill at a time?

Our first prototype was based on how a printer dispenses paper and utilized multiple roller mechanisms that would dispense a bill from a stack. Basically a spring would push up a stack of bills to a certain height and then a rolling cylinder with grippy material would push the bill forward. We then moved on to our second prototype which is the design that we ended up using with two rollers and fabric pulled between them. This design is essentially a piece of fabric taped to two roller and as its winded, bills are inserted between the folds of the fabric. The fabric is then unwound to dispense the bills. 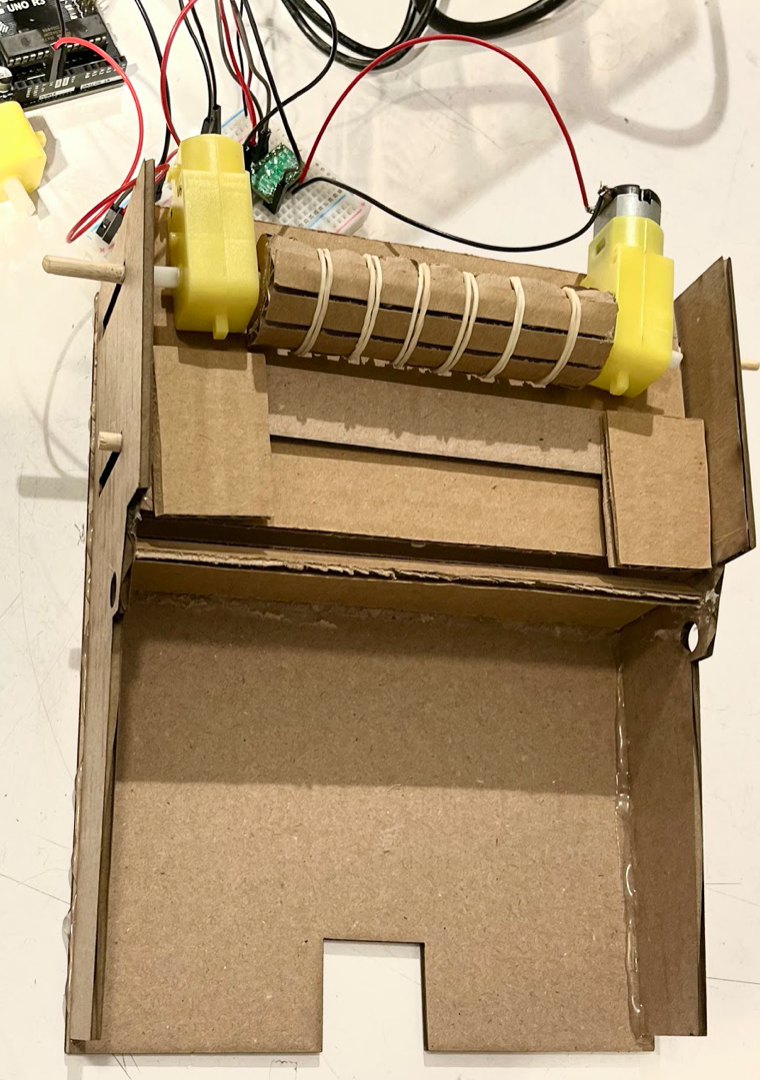 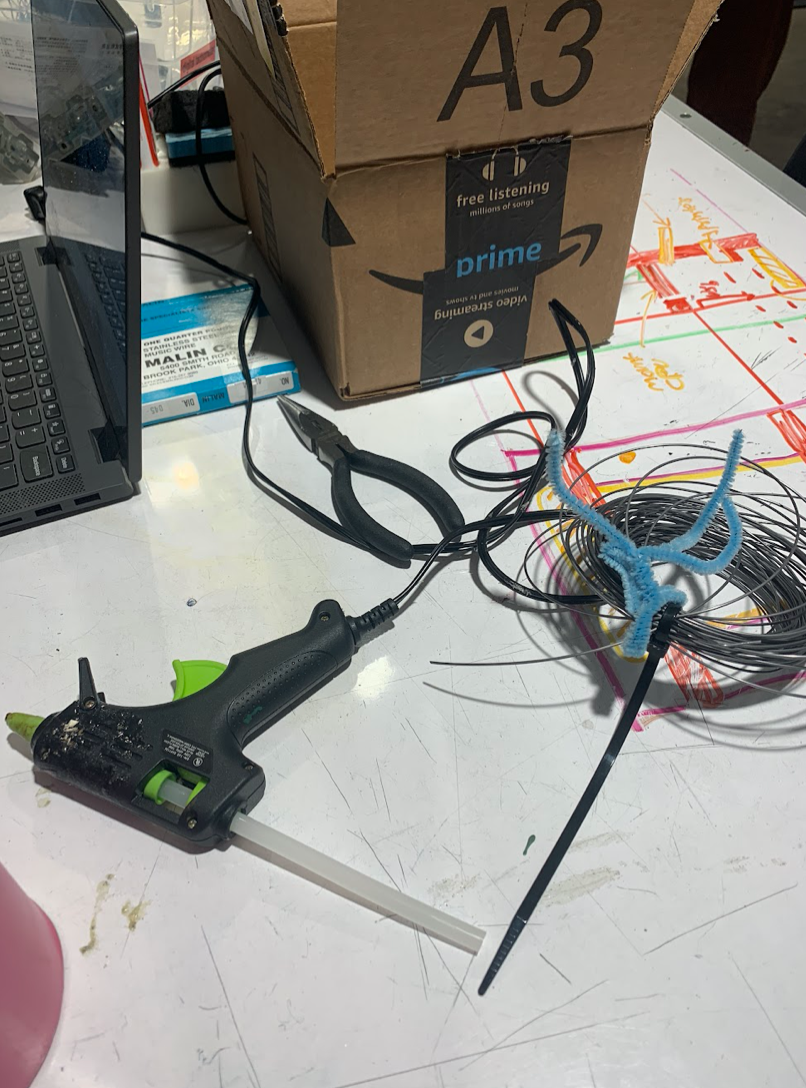 The first prototype required us to make a spring which we did by wrapping wire around a clamp. 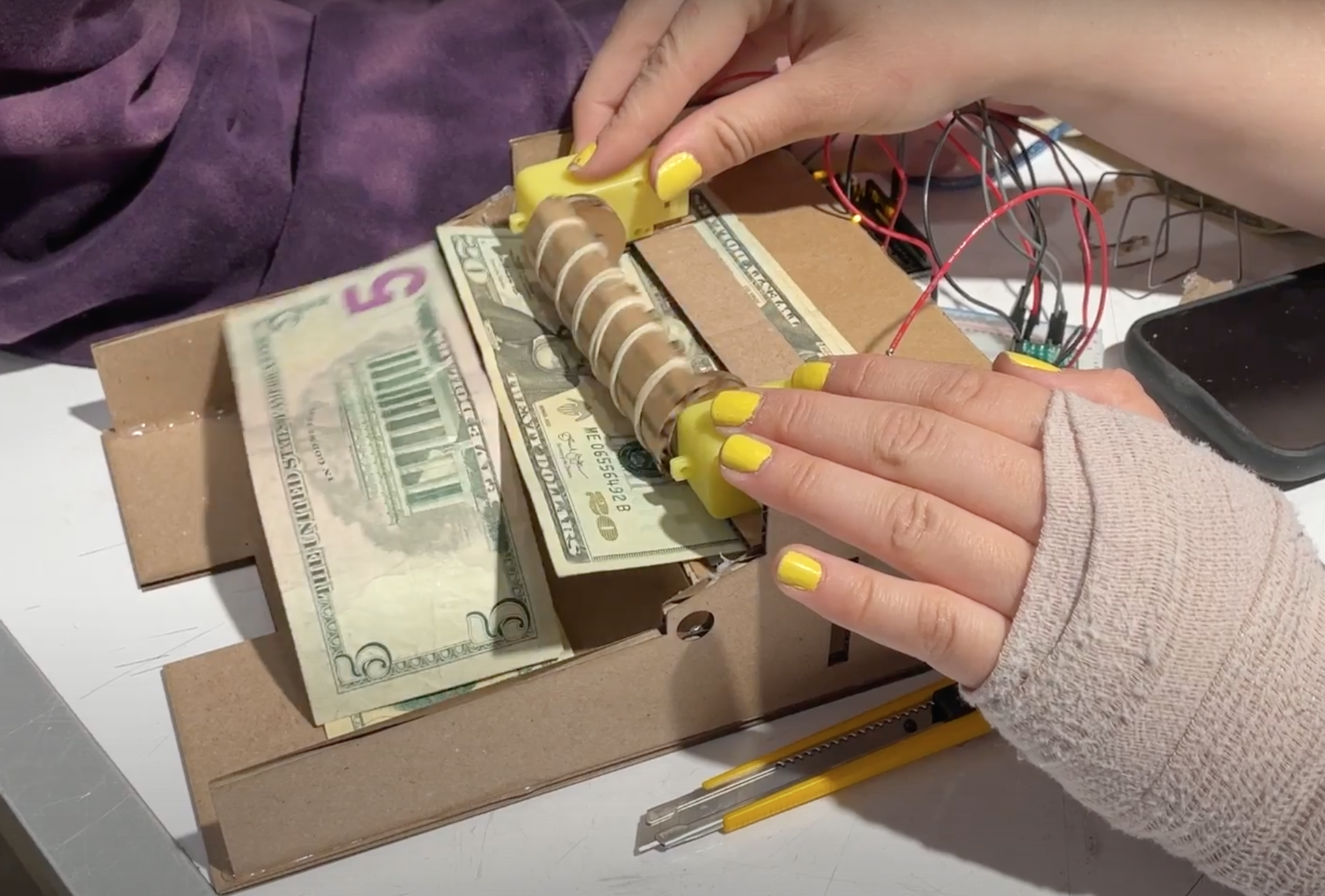 First rolling mechanism with only two motors and one set of rollers.

Our first prototype of the bill dispensing mechanism was not able to consistently roll out a single bill at a time. 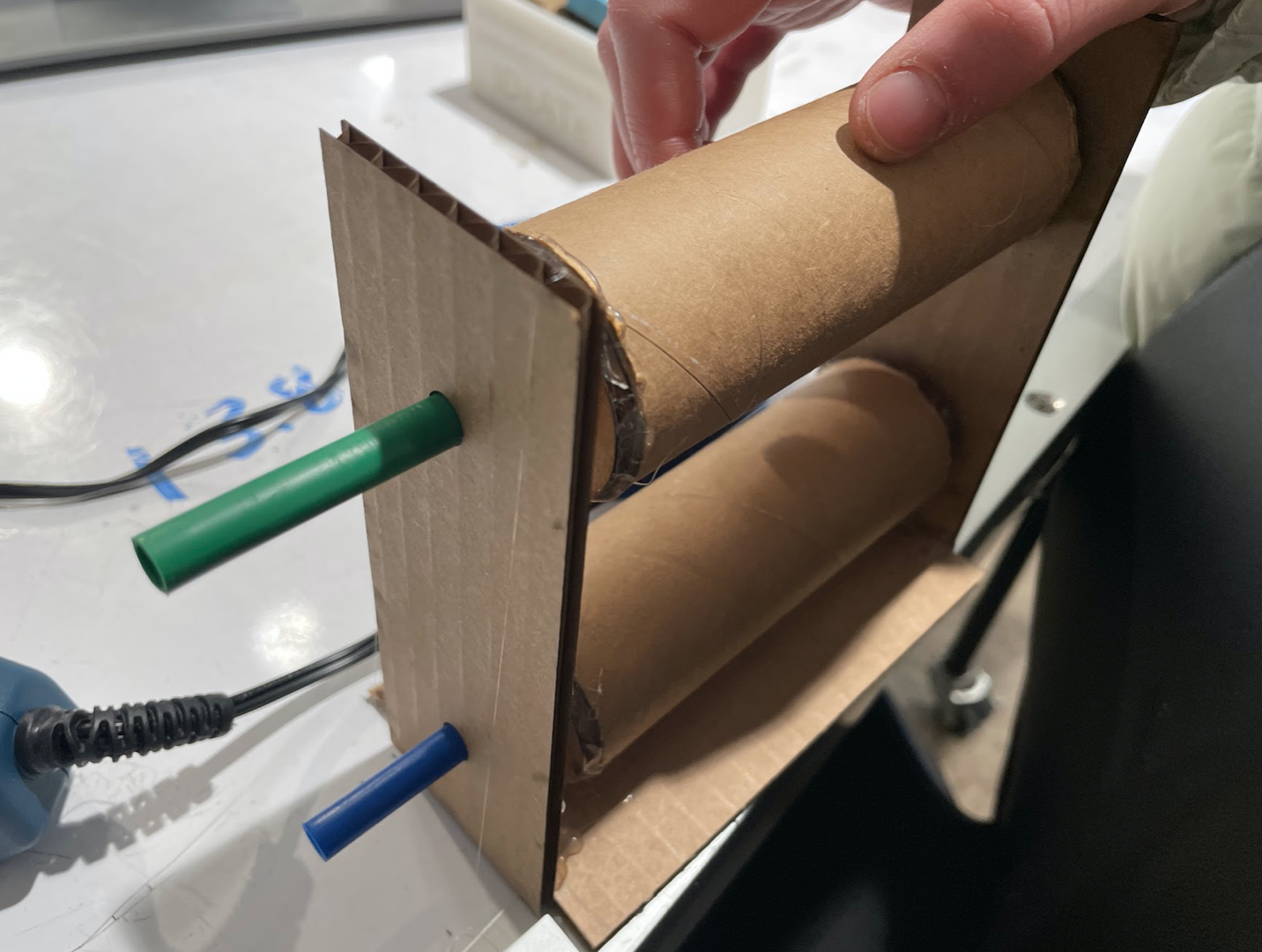 Prototype of the new bill dispensing mechanism without fabric attached 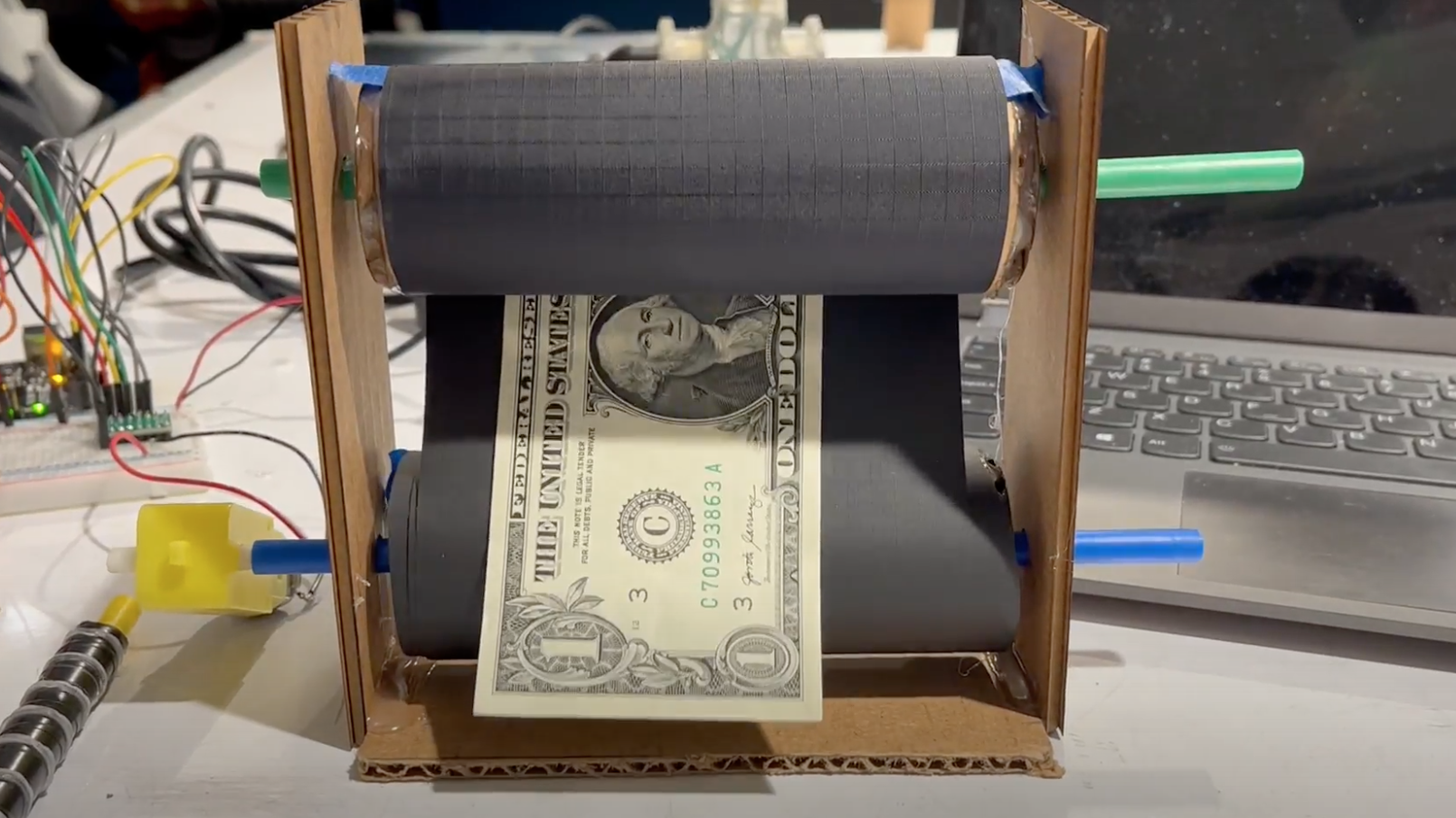 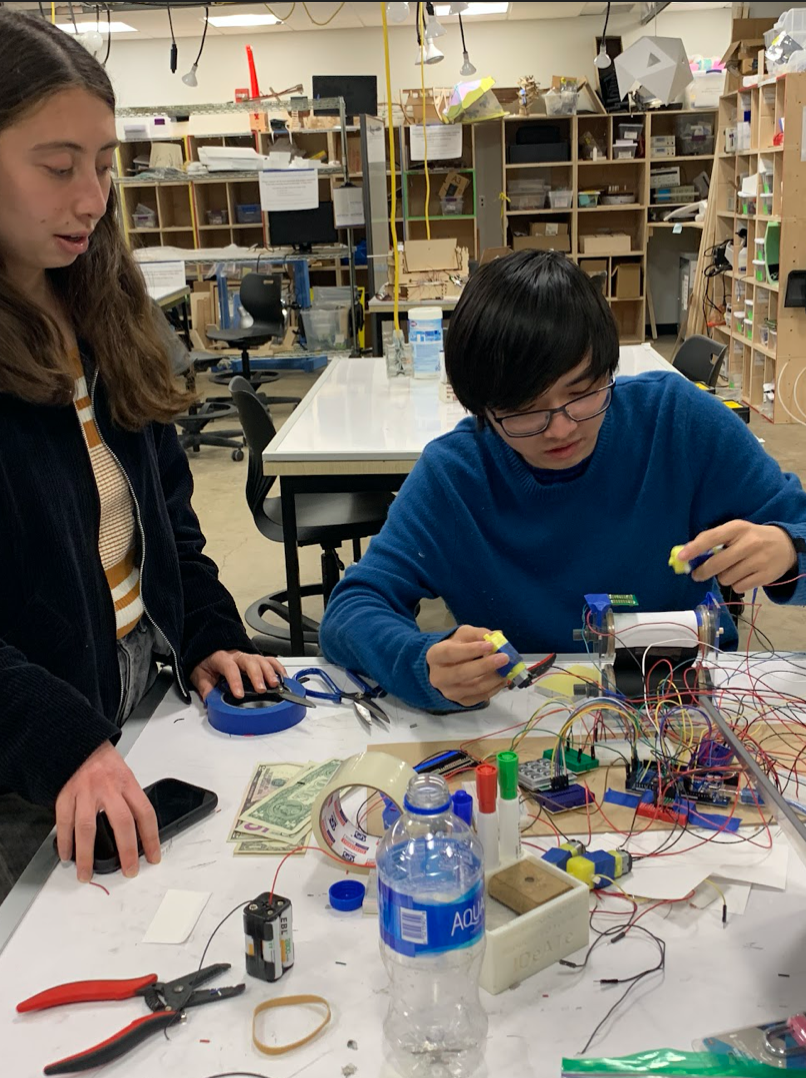 Assembling our prototype for our final design

Most of our prototyping process was spent figuring out if it was possible for us to create a money dispenser, specifically one that would only dispense one bill at a time. We first modeled our mechanism after a printer that utilized a set of rollers that would only allow one bill to pass through at a time. However, we found that this mechanism required high precision tolerance between the rollers which was difficult for us to consistently achieve. We then switched to our final mechanism which instead of storing the bills in a stack where they could stick together, layered the bills separately inside a roll of fabric.

We received feedback that our original mechanism was flawed because we did not have a way to detect if the correct number of bills had been dispensed, which we solved by integrating IR sensors into the design. However, we weren’t able to react to the feedback to make the mechanism smaller due to how much testing that would require and the time limit we were under. The biggest (good) surprise we encountered was how smoothly our second mechanism worked after having so much difficulty with tweaking the first one. 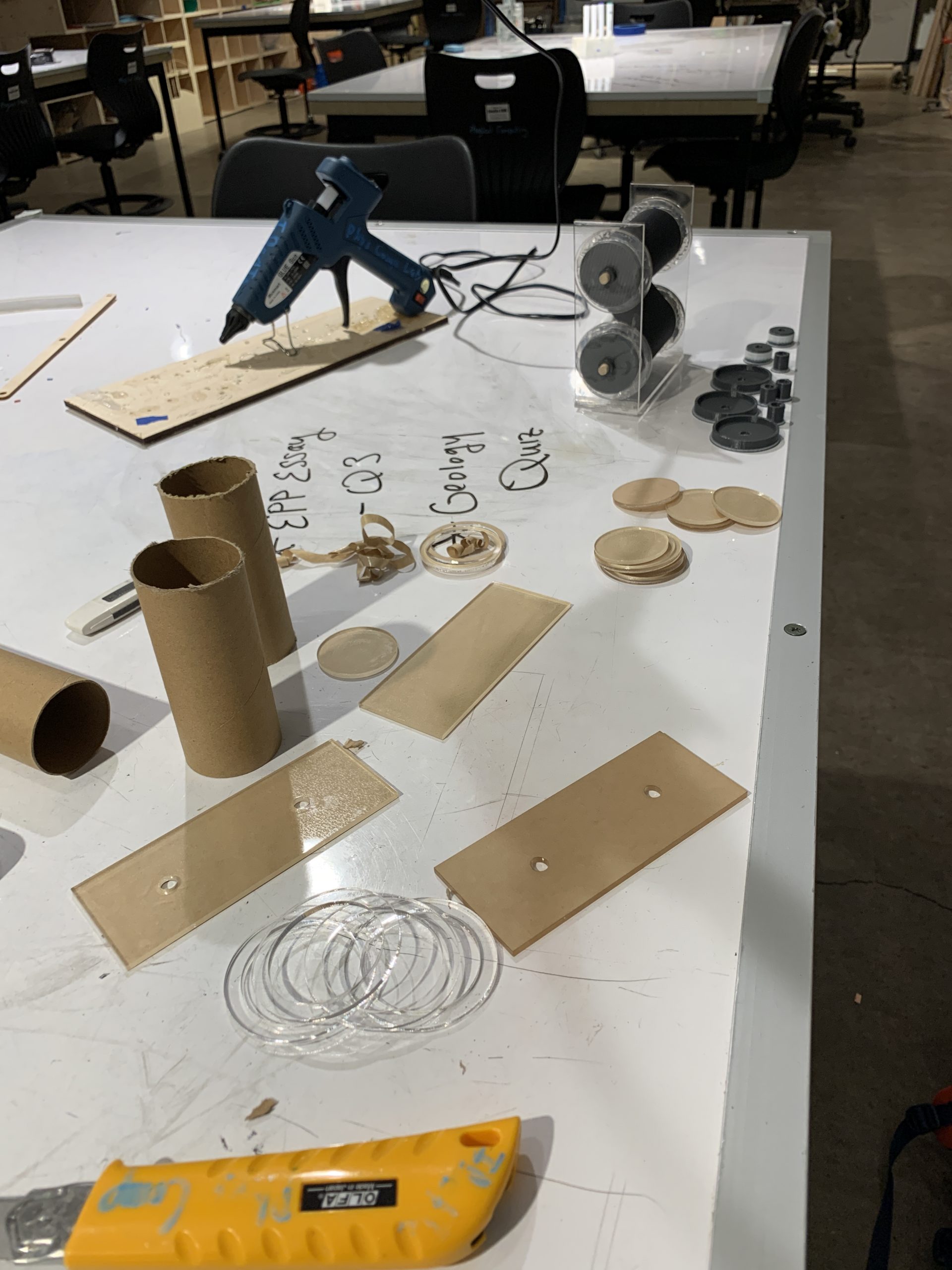 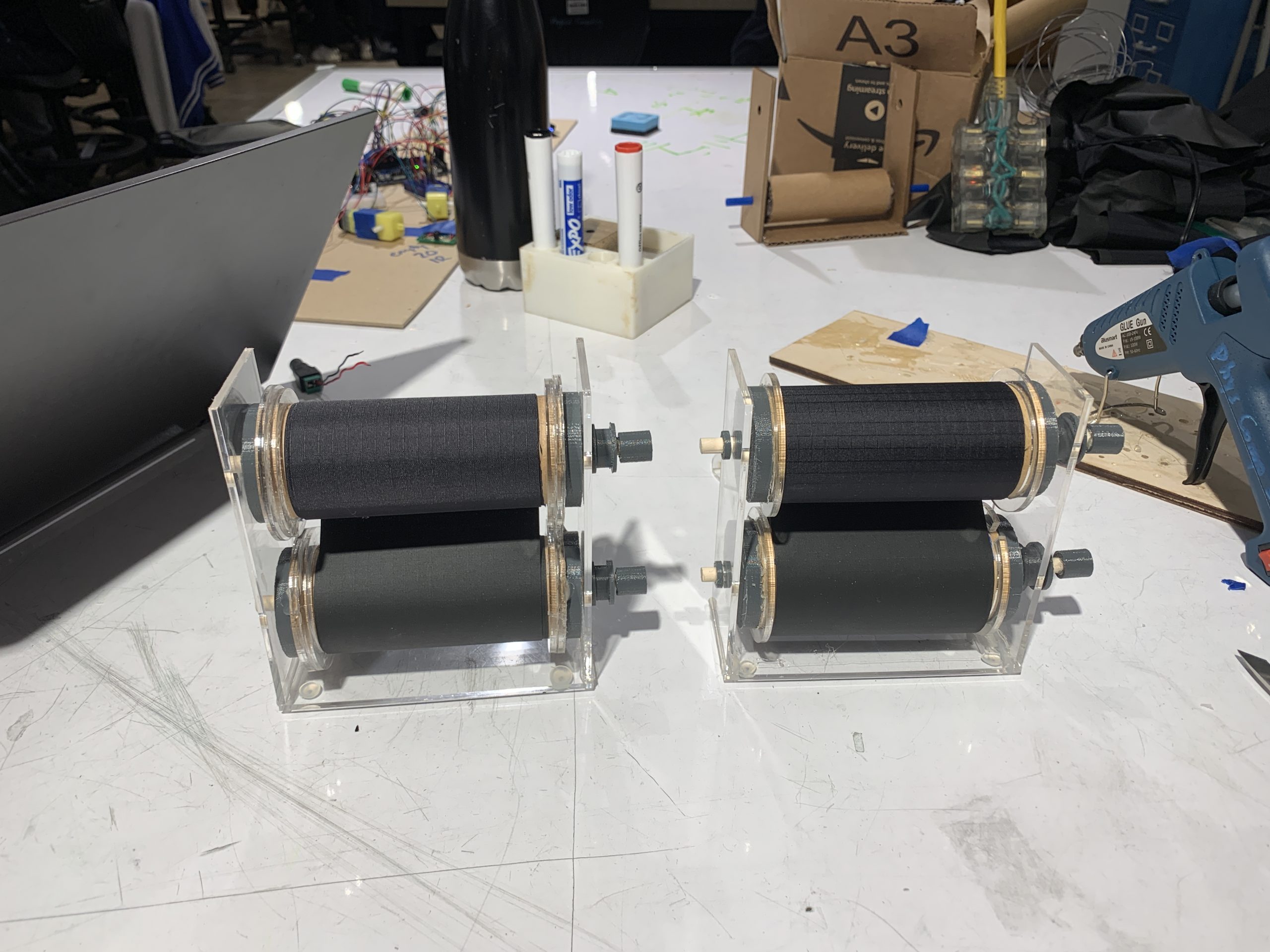 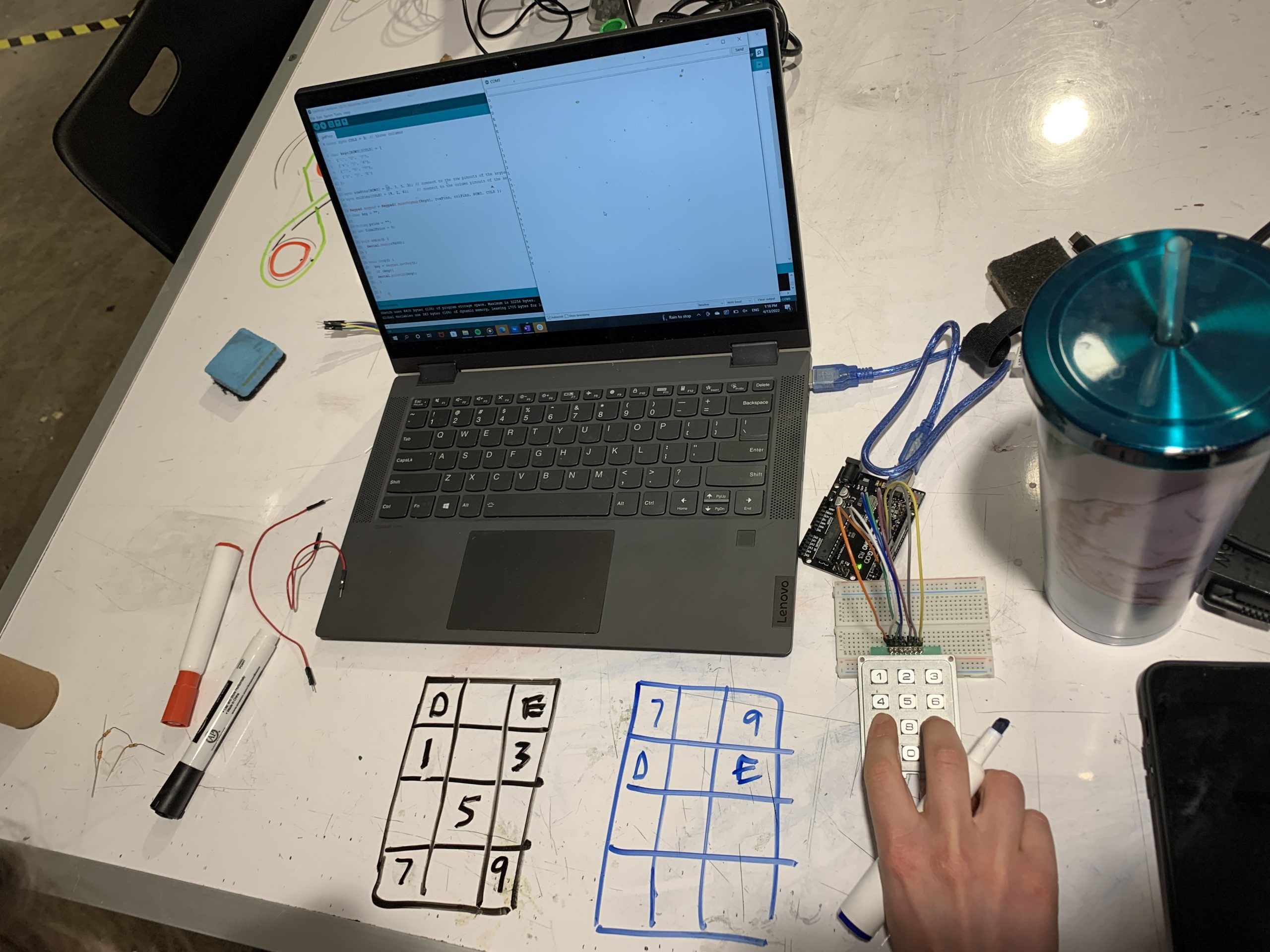 Figuring out the row and column pin-mapping for the keypad. 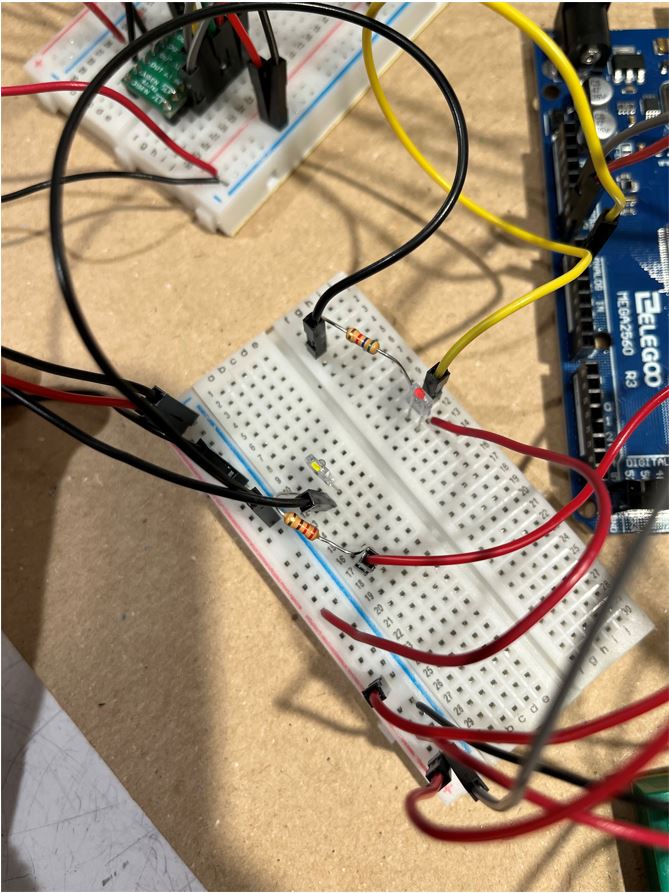 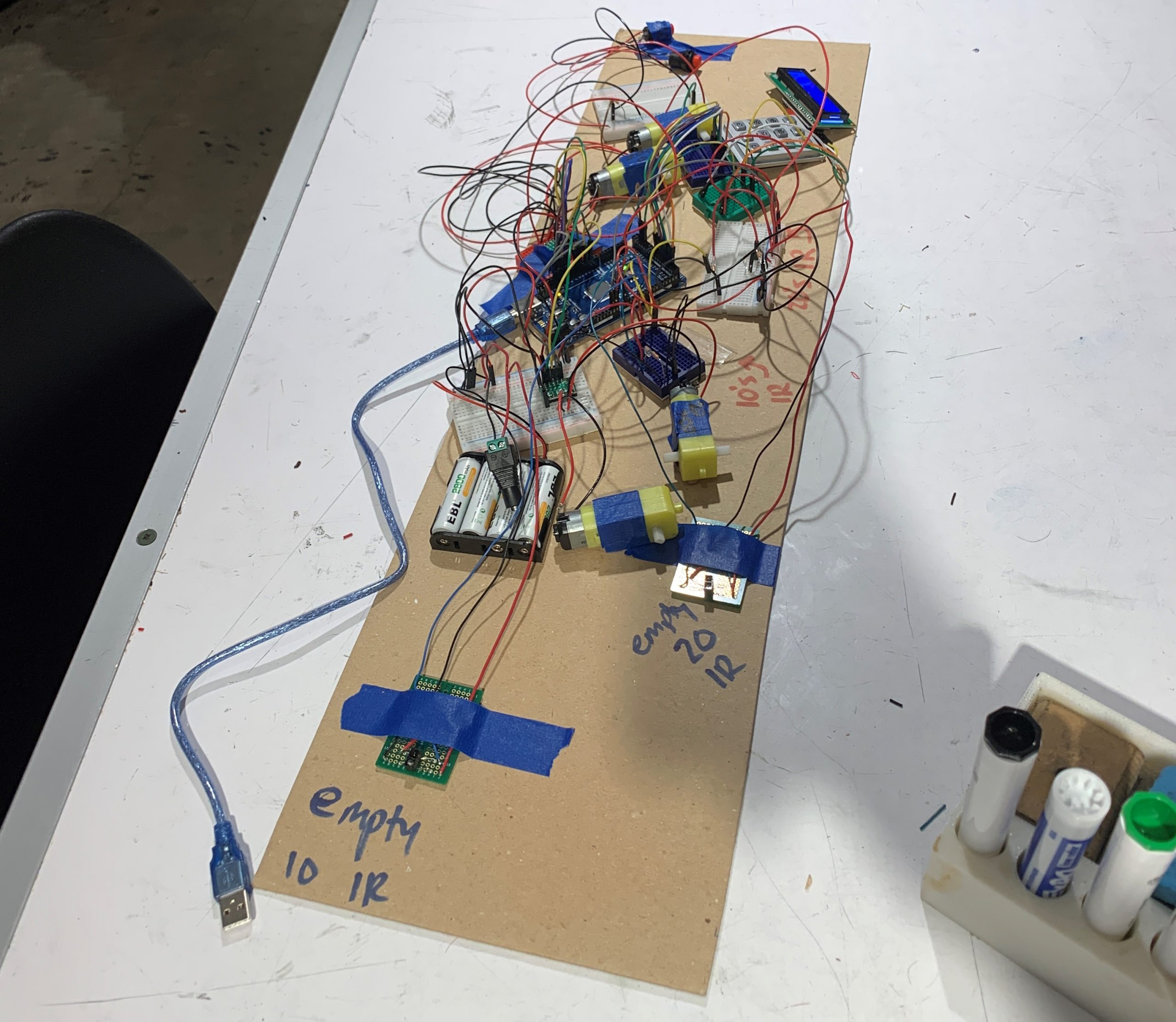 Integrating multiple pieces of hardware into a circuit with the Arduino Mega. 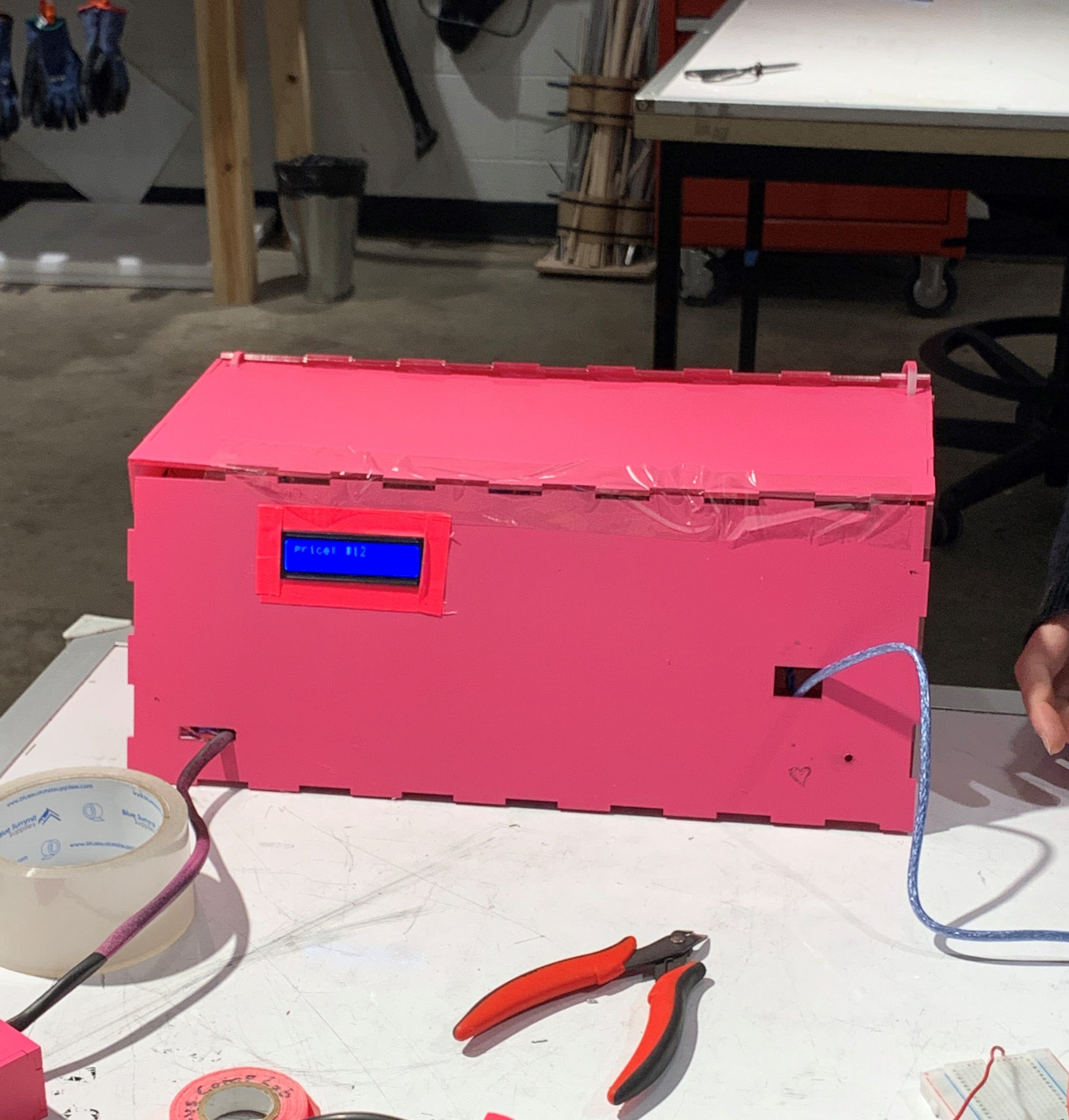 Constructing the back panel of the box

The biggest change in our design moving forward from our prototype presentation was switching our bill dispensing mechanism to a simpler two-roller setup. We found a mechanism online that used two rollers driven by motors to reload and dispense bills from a spool of fabric. This mechanism gave us more control over how many bills were released at once. It was also more appropriate for Allie’s needs since she told us that she gets about 60 dollars each week in the form of 3 twenty-dollar bills, so she didn’t necessarily need a device that could fit a large stack of bills.

We also had to make a decision about how our device could track the number of dispensed bills from each compartment. Initially, we planned to time how long it would take to dispense a single bill, but that would require the bills to be evenly spaced out when loaded into the rollers. Instead, we chose to use an IR transmitter and receiver that detects a decrease in the IR signal as a bill exits the money rollers. Similarly, we had to find a method to determine when a given compartment was out of bills. At first we planned to use an RGB color sensor to detect a color change when a roller reached a white piece of tape at the end of the fabric. However, we ended up using an IR sensor so that we would only have to work with one signal value rather than the three values that an RGB sensor outputs.

Our biggest breakthrough was figuring out how to prevent fabric slack from bunching up between the two rollers when running the motors. We found the best way to maintain good tension in the fabric roll was to drive the bottom roller faster than the top roller while dispensing and drive the top roller faster while reloading. This allowed us to smoothly and consistently dispense/reload bills.

One mistake we made was waiting too long to start arranging our pieces of hardware into the outer shell of the box. We spent a lot of time fine-tuning the IR sensor thresholds outside the final cash box. This took up a lot of time, and we had to redo the IR signal thresholds in our code anyway because the box provided a much darker environment. If we had put our entire device into the box earlier on, we would have still been able to fine-tune the performance of our hardware and would have had more time for wire management inside the final form.

Our team followed the sequence of tasks on the Gantt chart pretty closely. However, we underestimated how long it would take us to complete certain tasks. There ended up being a lot more hardware than initially expected, so the process of wiring, writing code, and introducing each component into the circuit took longer than expected. Rather than finishing the “implementing circuit” phase by 4/24, we didn’t finish integrating all the electronics and the roller mechanisms until 4/29. This only gave us 3 days to put all of our hardware into the outer box.

This project has been a difficult but rewarding experience. We have run into a lot of problems during every stage of the process, including revamping the entire mechanism after the prototype review, but we were able to put together the mechanism in the end. The box itself during the final review still had a lot of room for improvement. As pointed out by comments such as “the fabrication is flimsy with a less-than-ideal UI”, “a bit big”, and “[Allie] can’t see what comes out”, the fabrication was a last-minute process and had flaws such as its size and fragility. We also planned on making a locked cabinet in the front but couldn’t get around to installing it. Additionally, the box orients itself away from Allie which prevents her from seeing the money being dispensed. A great solution that our critic brought up was adding a “swivel” to the bottom of the device so that it can “turn towards Allie” first, then when Allie makes sure it is the right amount, she can turn the machine towards the shop staff. Moreover, the problem of size was also discussed heavily in the critique. One critic suggested using “bill recognition” and some forms of servo motor that directs the money out or back into the loop so that we can use one module for all kinds of bills instead of two modules for two types of bills. This will not only increase the utility of the machine but also downsize it to a reasonable and usable form. Another critic pointed out is the messy “inner components” that should be organized which might reduce the size of the box further. However, despite the shortcomings, our project still got some praise for tackling such a difficult problem, dealing with single sheets of paper. Some critics said that the “motor system works well” and contains “clever paper handling” which we are happy to see.

Working with Allie has been a phenomenal experience as she was extremely helpful during our creation process. Allie shared us some hobbies with us and even some of the posters she made in her free time. We were able to learn to incorporate ergonomic designs into the project that caters to Allie’s specific needs, and through that, we learned more about disability beyond the project as we realized that disability is not just simply a medical definition but also a social problem. Some items and facilities are simply not designed for those with different needs and people are handicapped by the products and that is an external problem instead of an internal one. In the future, we will ask more questions working with people with disabilities and have more meetings with them to get a better sense of the user’s experience.

Working on Zoom certainly brought up some difficulties during the interview as Allie had some issues with her microphone, but overall, we as a team were able to get together in person for the most part and work in the Physical Computing lab together without any issues. 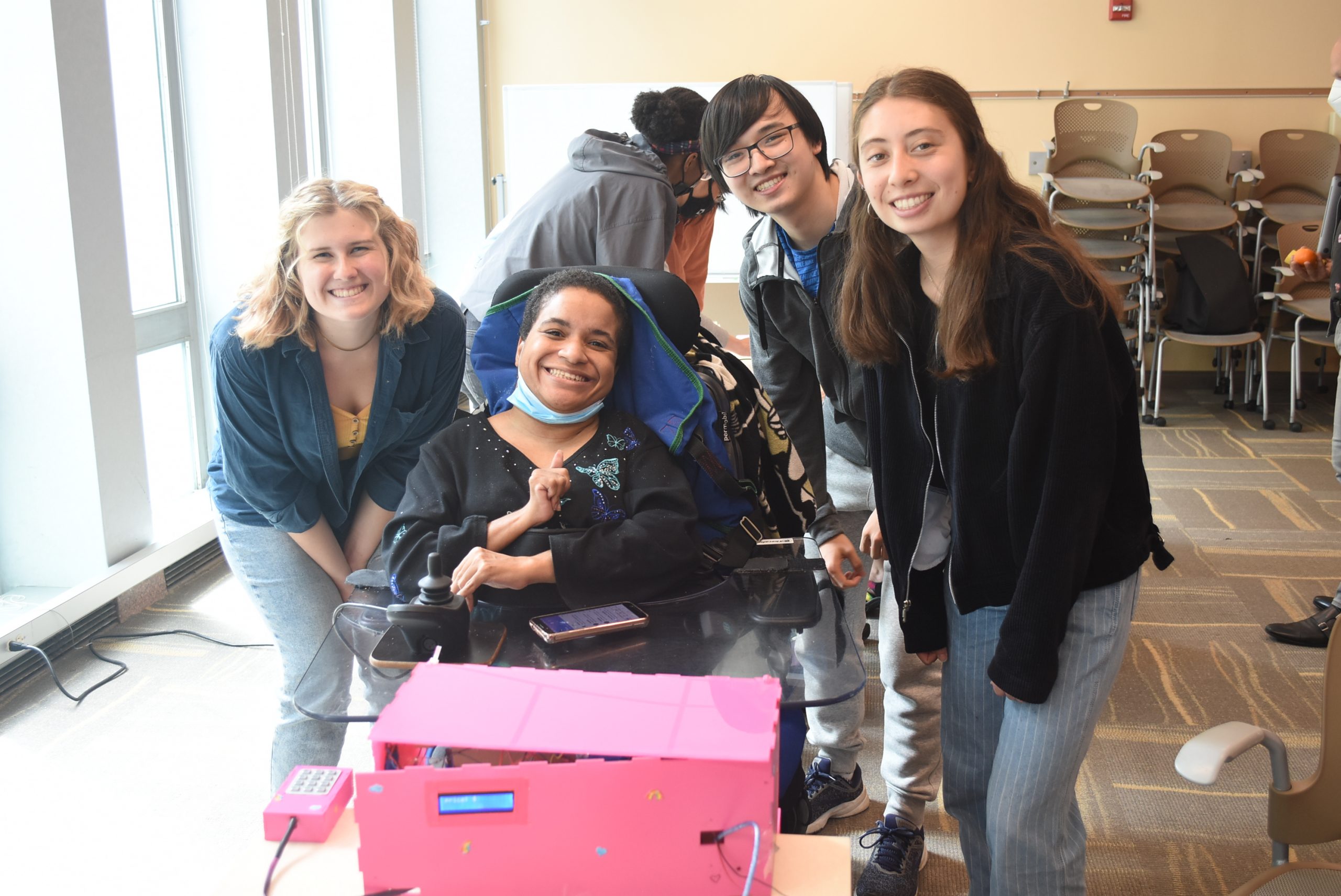 Photo with Allie at the final critique.