This box reminds the user to write something down at the end of every day to entice journaling habits!

This video demonstrates how the box works. The box is triggered by the IR sensor detecting a person approaching near the box, then it releases the solenoid, popping open the box, and sounds an alarm that doesn’t stop until the user takes the journaling book out of the box. 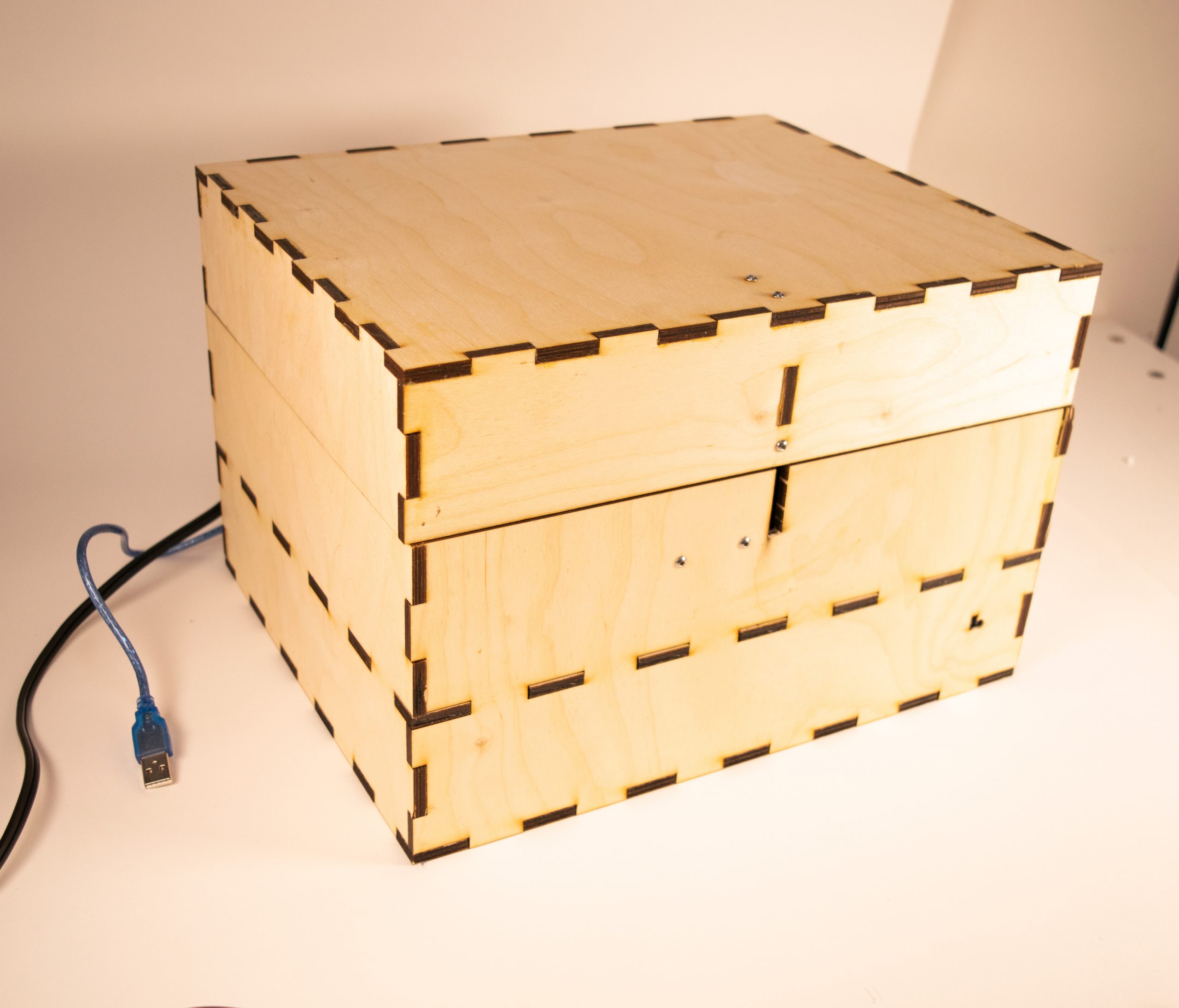 The Diary Reminder Box when it is Closed 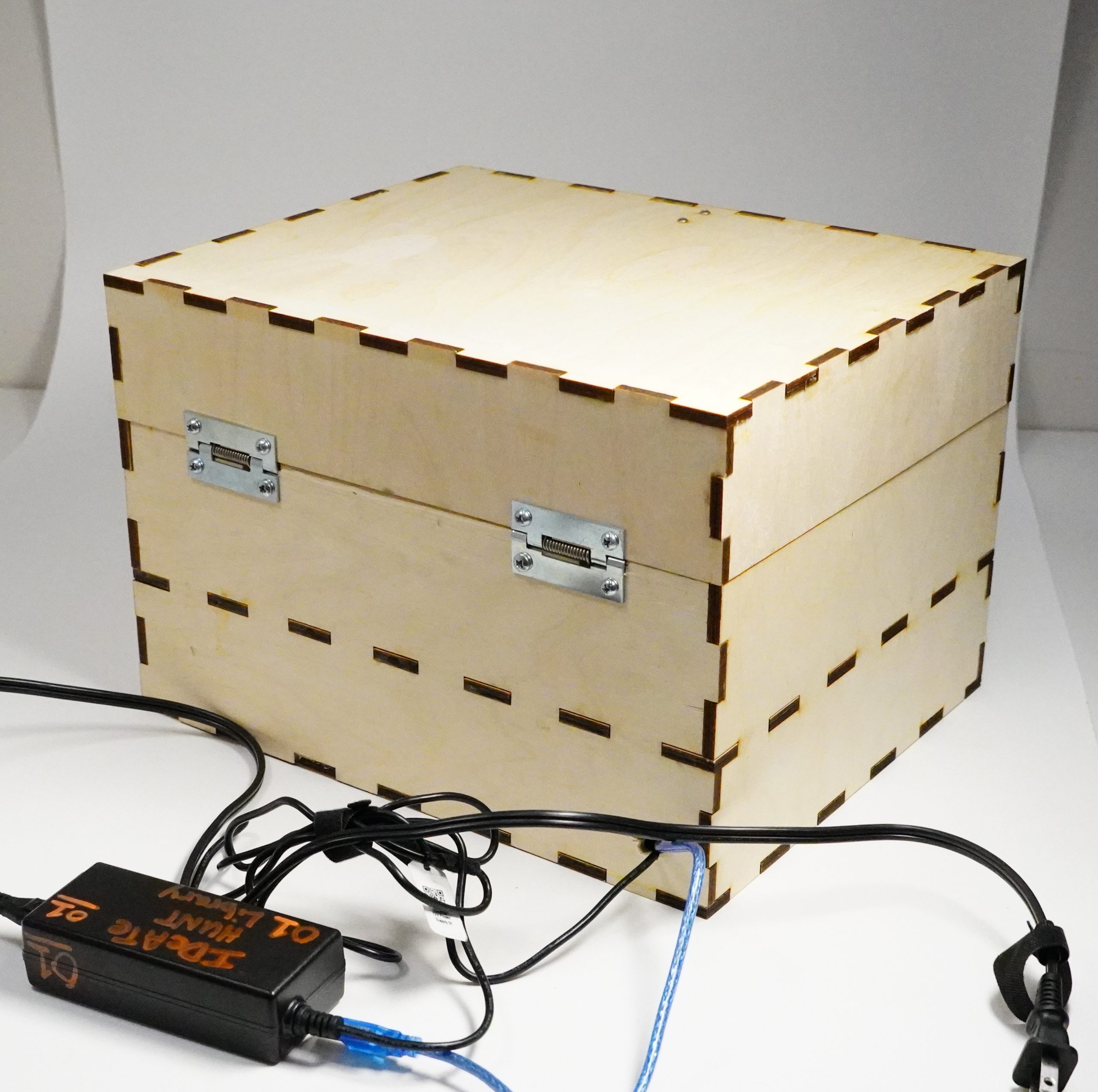 Back Side of the Reminder Box when it is Closed 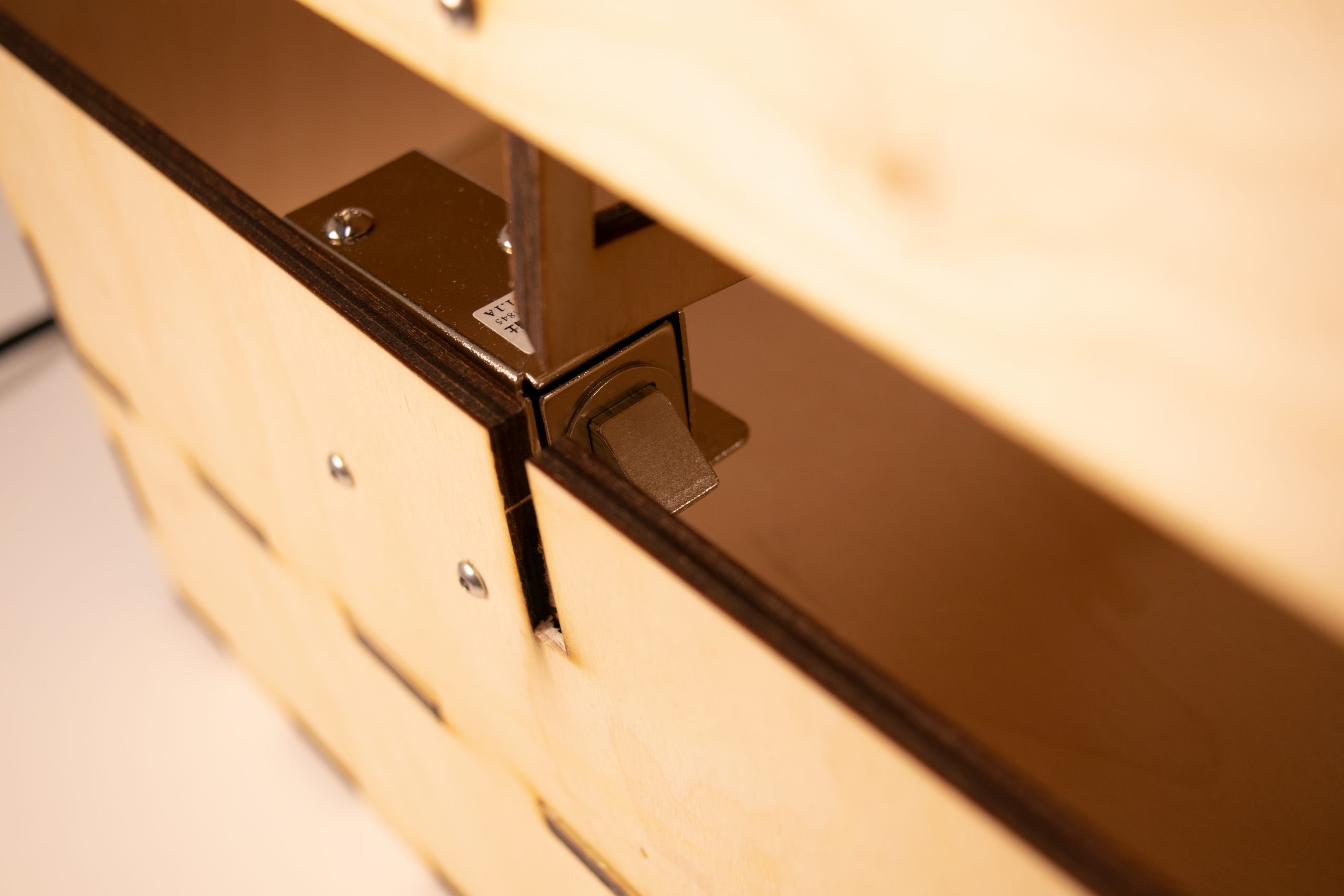 The solenoid lock mechanism keeps the lid closed when the box isn’t activated. The solenoid snaps into the wooden loop above to hold the lid shut and releases the loop when powered. 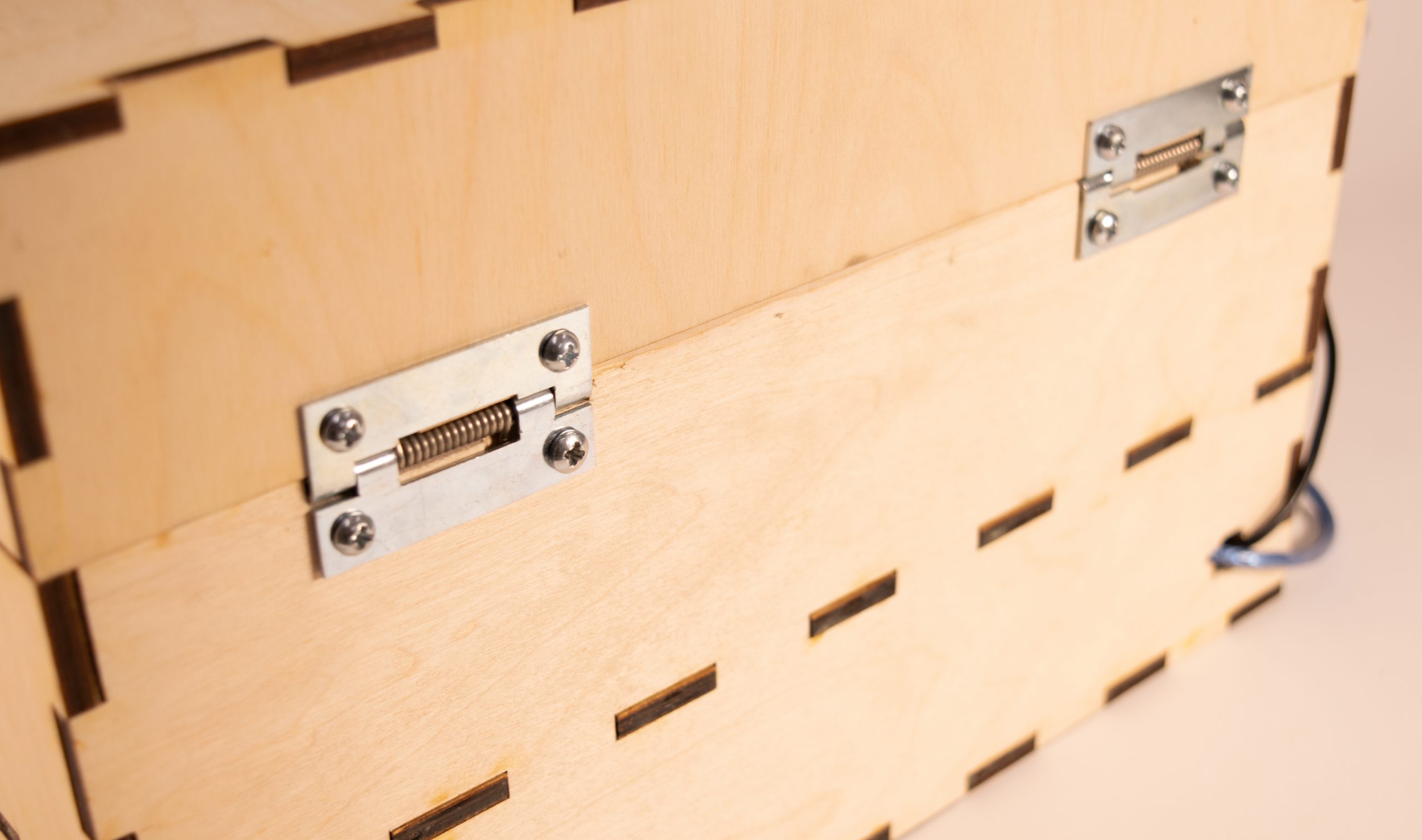 The two hinges in the back would swings open the lid when the mechanism is activated. It is normally held stable, as seen in this picture, by the solenoid lock. 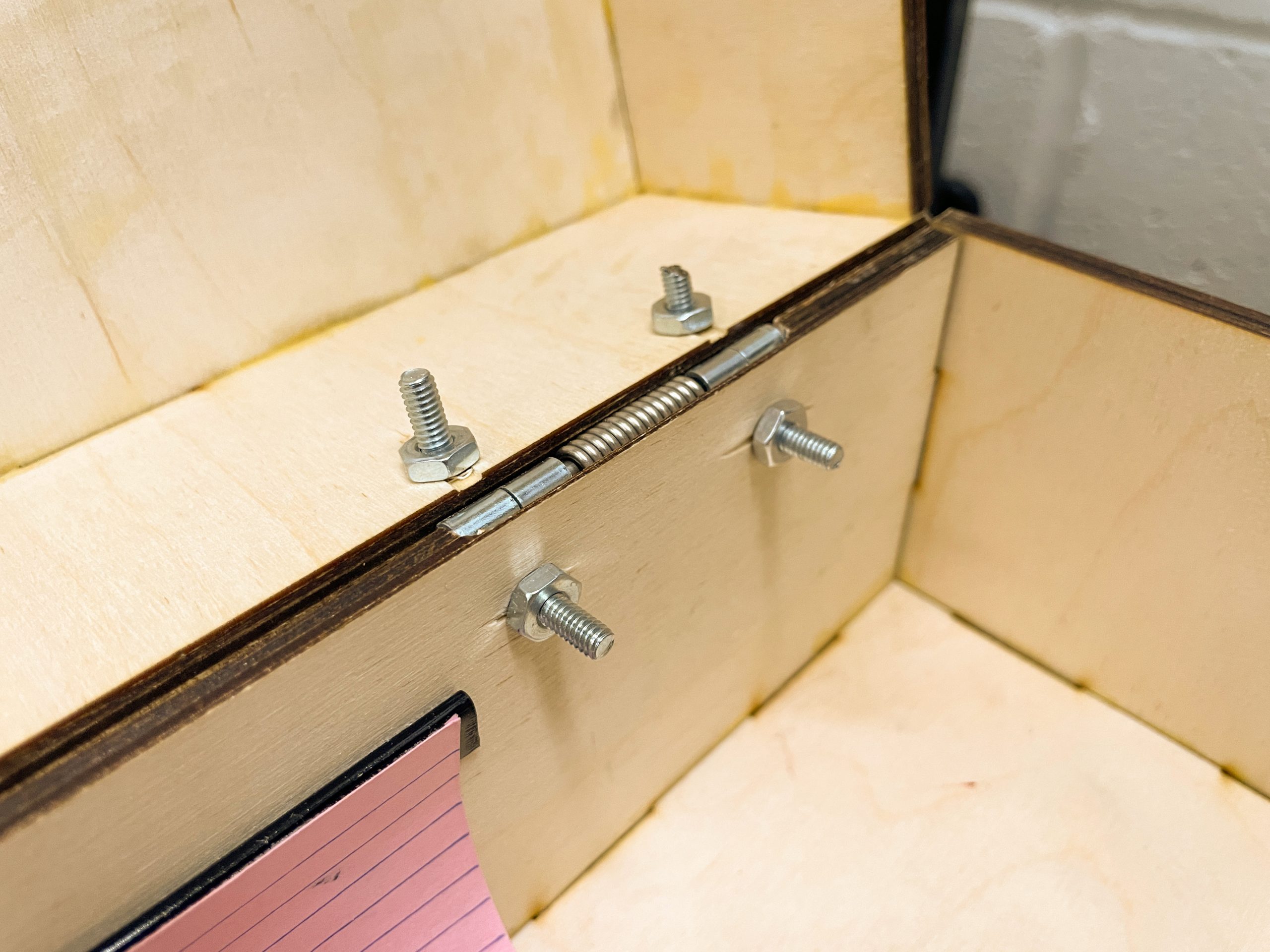 The view of the hinge from the inside. The hinge is carved into the side of the box so there won’t be gaps between the hinge itself and the box. 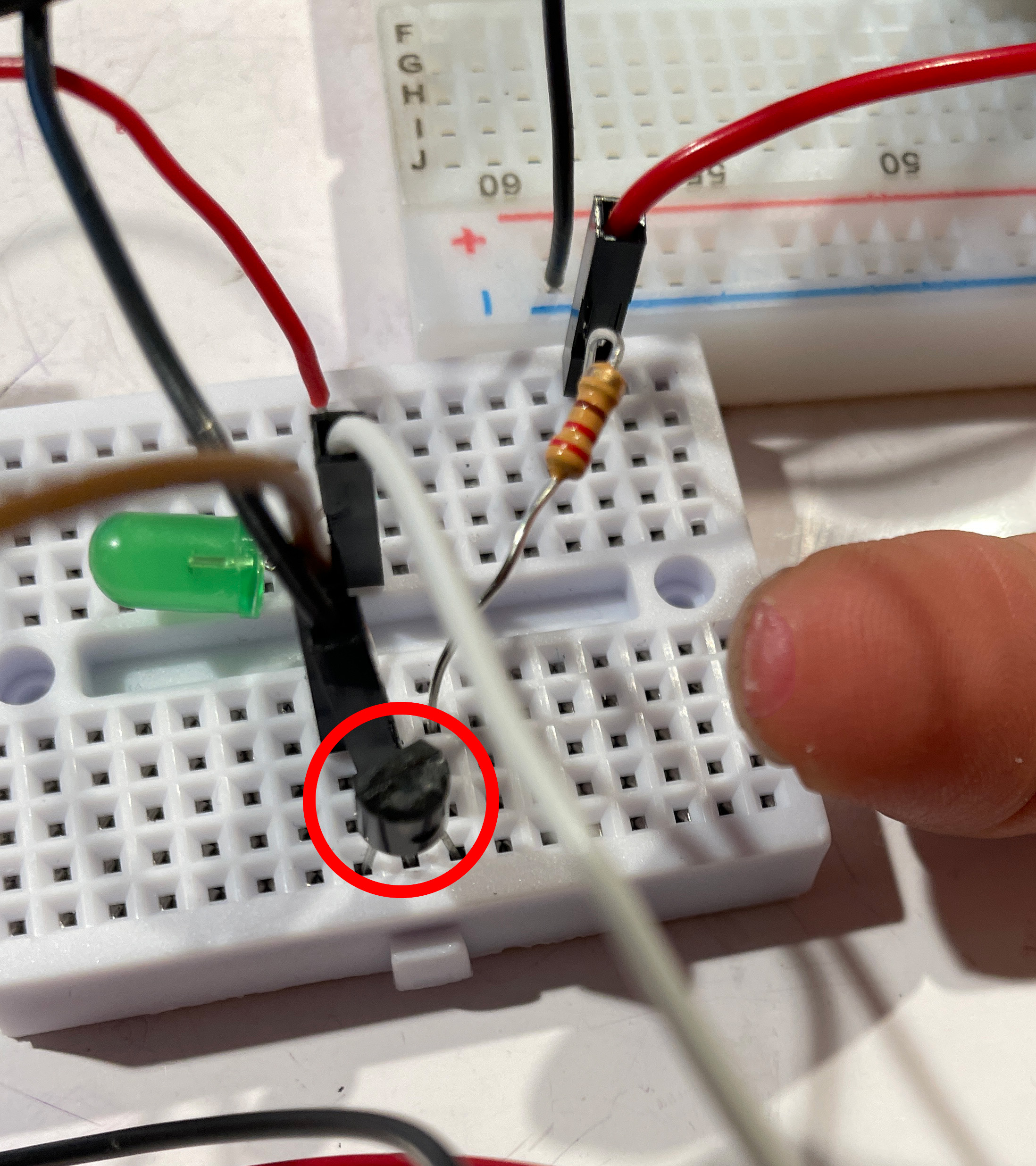 I burnt my finger while attempting to wire the solenoid to the arduino board by touching an extremely hot transistor (circled in red). After talking with Professor Zacharias, I realized that I used the wrong transistor and was overheating the PNP transistor. 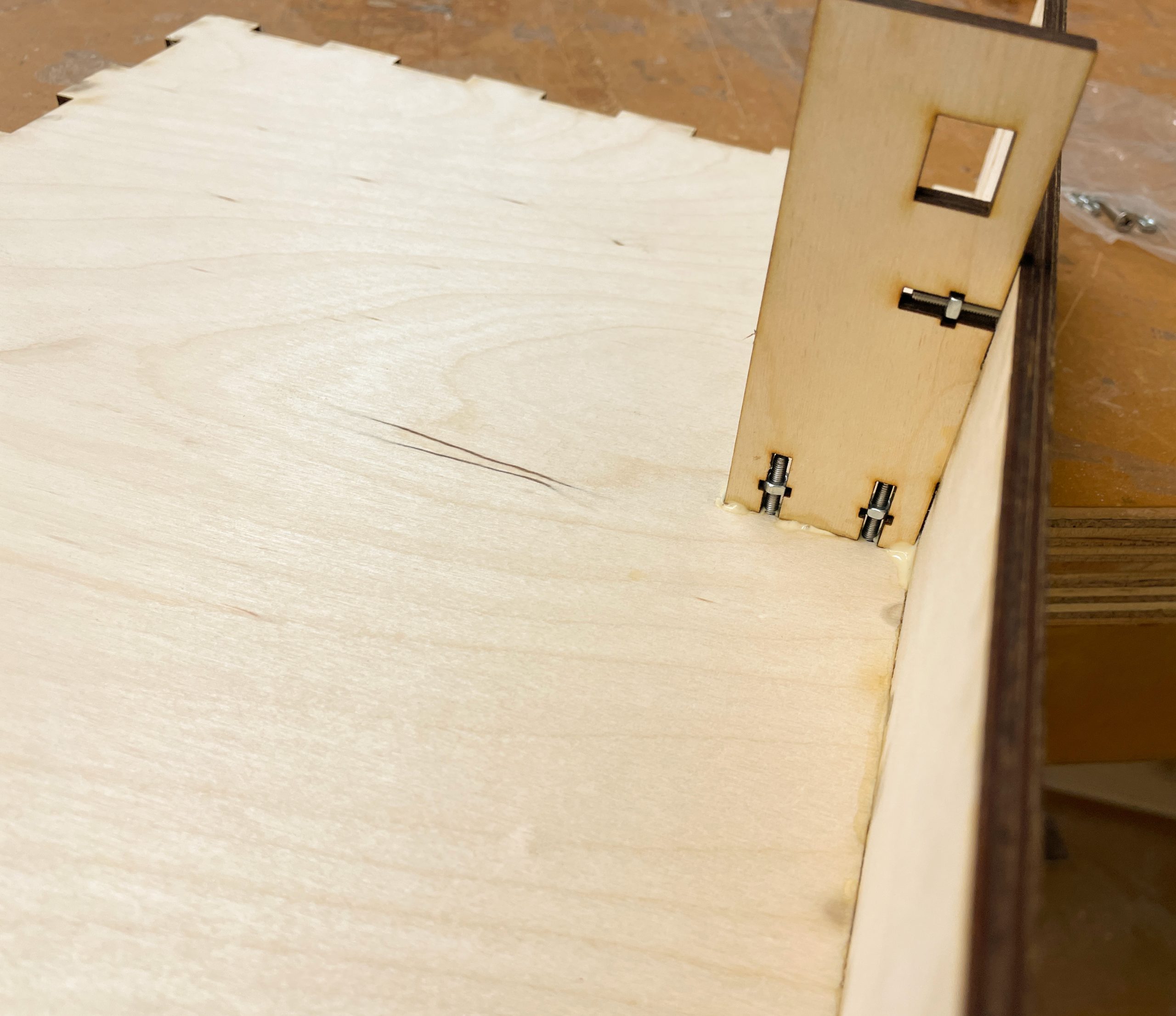 I had to redo the entire top half of the box because I overlooked the lock part of the box completely. I also implemented bolted joints instead of finger joints in fear that the loop wouldn’t hold the force pulling on it by the solenoid. 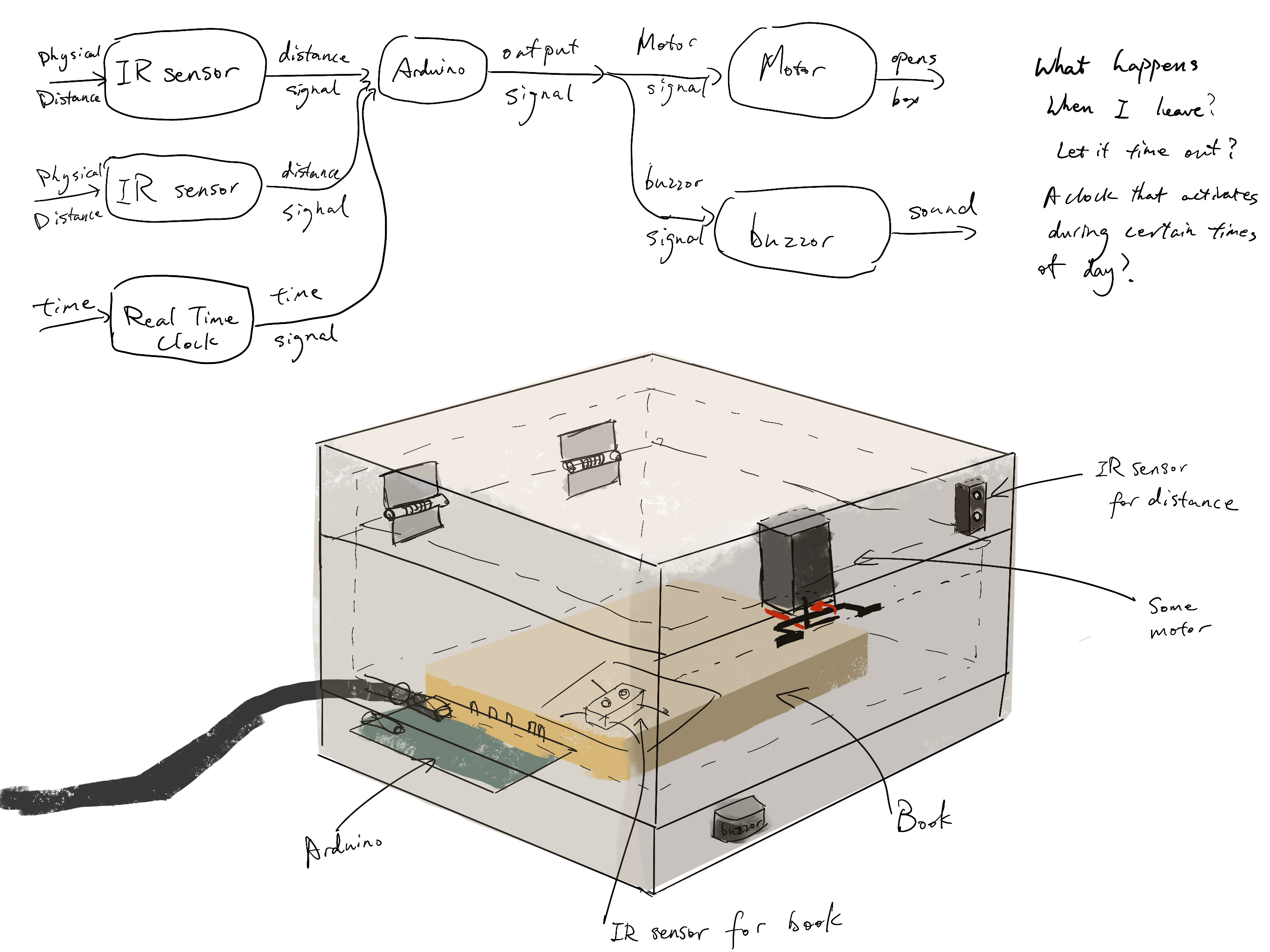 During the brainstorming phase, I created this diagram of what I thought the box would look like and how everything would be arranged. Everything remained similar except that I changed the lock configuration completely and moved the outside Infrared sensor down into the wiring compartment. 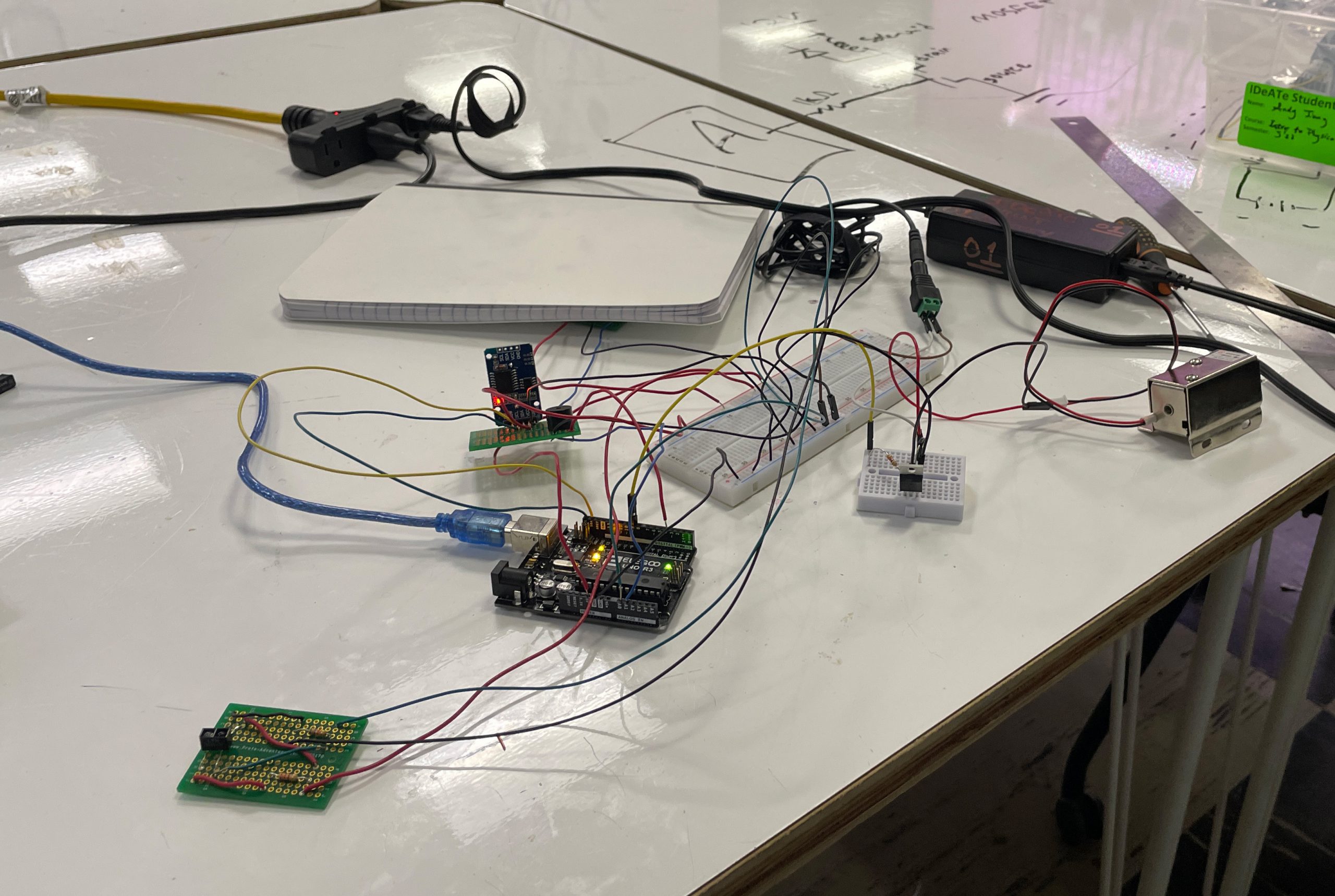 For this project, I separated the woodshop/laser cutting from the wiring because it would be difficult to take out and fix the wirings after I assembled the different parts.

This project was overly ambitious when it came to its ideation. Before starting the project, I had an idea of a box that pops open when I get close to it during bedtime. Unbeknownst to me, the box would be a terribly complex thing for me to build without knowing how to design a box that springs open and locks. I 3D modeled a box with an enclosed compartment and finger joints with no issues, so I laser cut all of the pieces out with a few minor hiccups as it was my first-time laser cutting. however, after meeting with Professor Zacharias a few more times working out how I will make the box lock and open, I realized that I need to scratch the top half of the box and redesign it so that it can lock the box in place and be bolted down with two self-opening hinges (which I mistakenly bought over self-closing hinges, which could have saved the effort cutting out notches on the box for the spring of the hinge). The project became a lot more woodshop heavy than I imagined when I decided that I didn’t want to waste a lot of the wood I have laser cut before, so I resorted to a mortise and tenon machine, band saws, and other types of machinery. Because of this, I was unable to get the lock mechanisms fully working with the solenoid because I drilled the hole for holding the solenoid a little too low. Justifiably, I got comments such as “Improve the locker for the next step” and “I think the lock can be worked on a little more” for the critique comments, and I think it is completely valid as my whole box relied on this mechanic. I also got a comment saying that I should “make the top just a flat piece of wood” as the book is very thin and doesn’t need the space up top; I completely agree with this comment as the top was also a lot heavier than the spring of the hinges can handle, so they barely lift the top unless it’s at less of an angle, and it is just a lot more efficient material-wise if I used a flat top.

Overall, I am mostly satisfied with what I had come up with and created, as this project marked a lot of firsts for me, first time designing a mechanism, first time laser cutting, first time combining woodshop skills with wiring and coding, the list goes on. However, I do think that there are also a lot that I could improve on and a lot that I learned from. I learned that it is very easy to over-scope projects and overestimate my skills and abilities, and it is very hard to create a fully functioning mechanism. If the mechanism doesn’t work perfectly, it doesn’t do its job correctly. In the future, I will try my best to gauge and estimate each step of the design and see if it will fit into the schedule. A completed but less fancy project would be better than a project that doesn’t work at all.

I think I won’t try to make a completely new iteration of the project, but I were to, I would change the top like the comment suggested to one piece of wood, sand down the lock mechanism so it closes and opens properly, and add a safekeeping system to prevent the book from not being returned to the chest.