The Inspiration Capture Device (ICD) is the product of weeks of collaboration with our team’s client, Mary. After meeting with Mary multiple times in person and through the phone, we determined that Mary, as a writer, values the inspiration that can come at a moment’s notice highly. Thus, we wanted to make her an assistive device that allowed her to quickly and easily capture whatever kind of inspiration reaches her in her daily life so that it could help her writing process.  For some more background information on our project, please refer to this post: https://courses.ideate.cmu.edu/60-223/s2022/work/team-callisto-interview-documentations/

The ICD captures ‘inspiration’ in two different ways- through a picture taken on a small camera or through a voice memo recorded on an audio recorder. The ICD is meant to do this while being as accessible as possible for Mary; the device is split into two parts (a remote controller and a necklace) to make it easy for her to interact with. At the mere press of a button, Mary can take a picture of whatever she is currently facing or turn on a voice recorder on her neck to quickly capture what’s on her mind for future use. 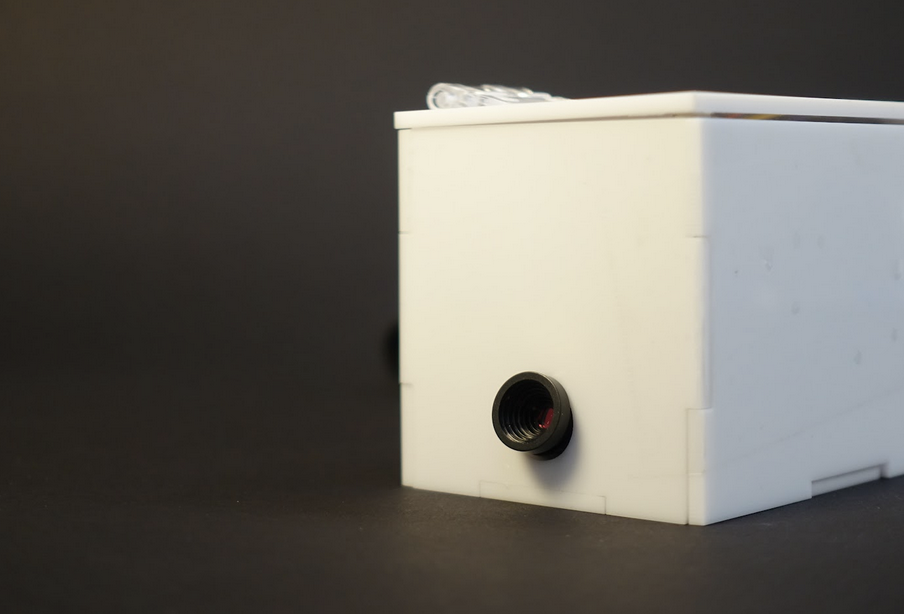 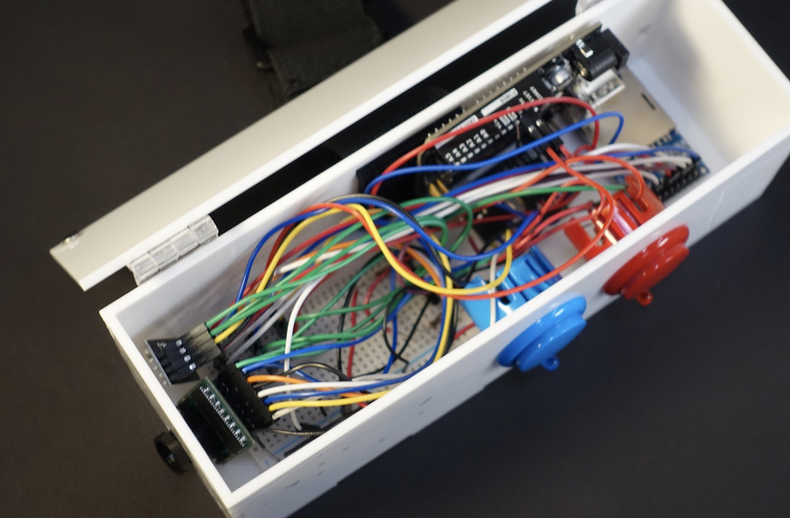 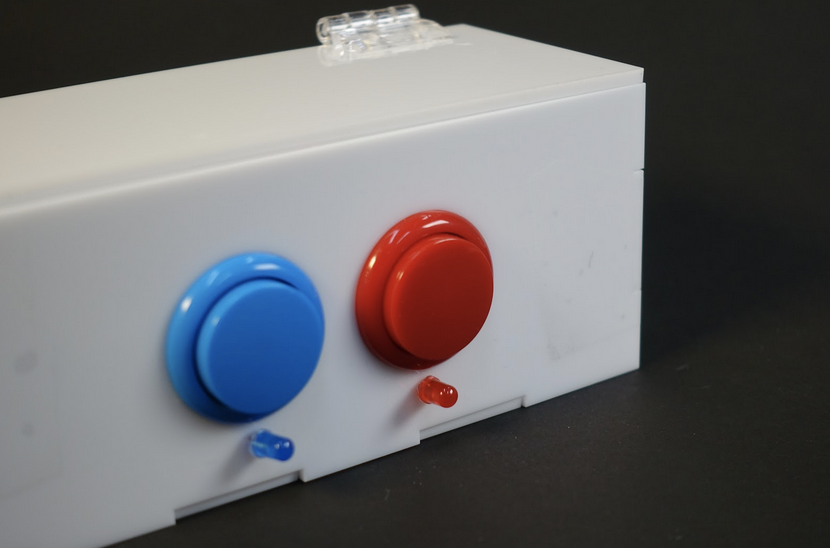 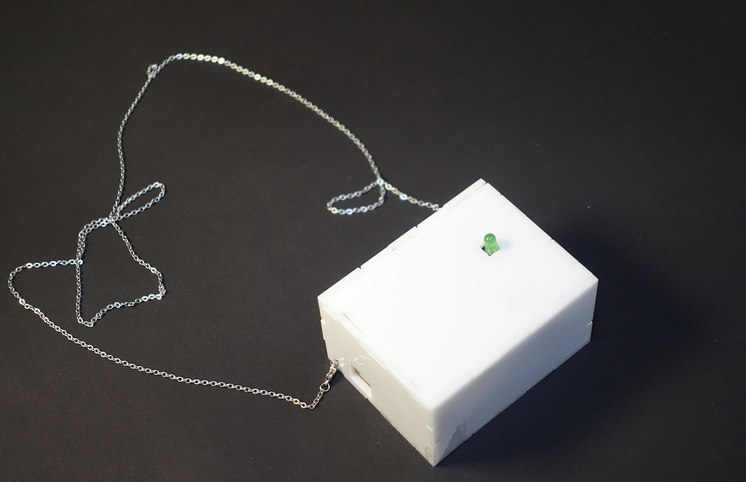 The necklace part of the ICD featuring a green LED

The above video is a compilation of clips relating to the ICD’s capabilities. 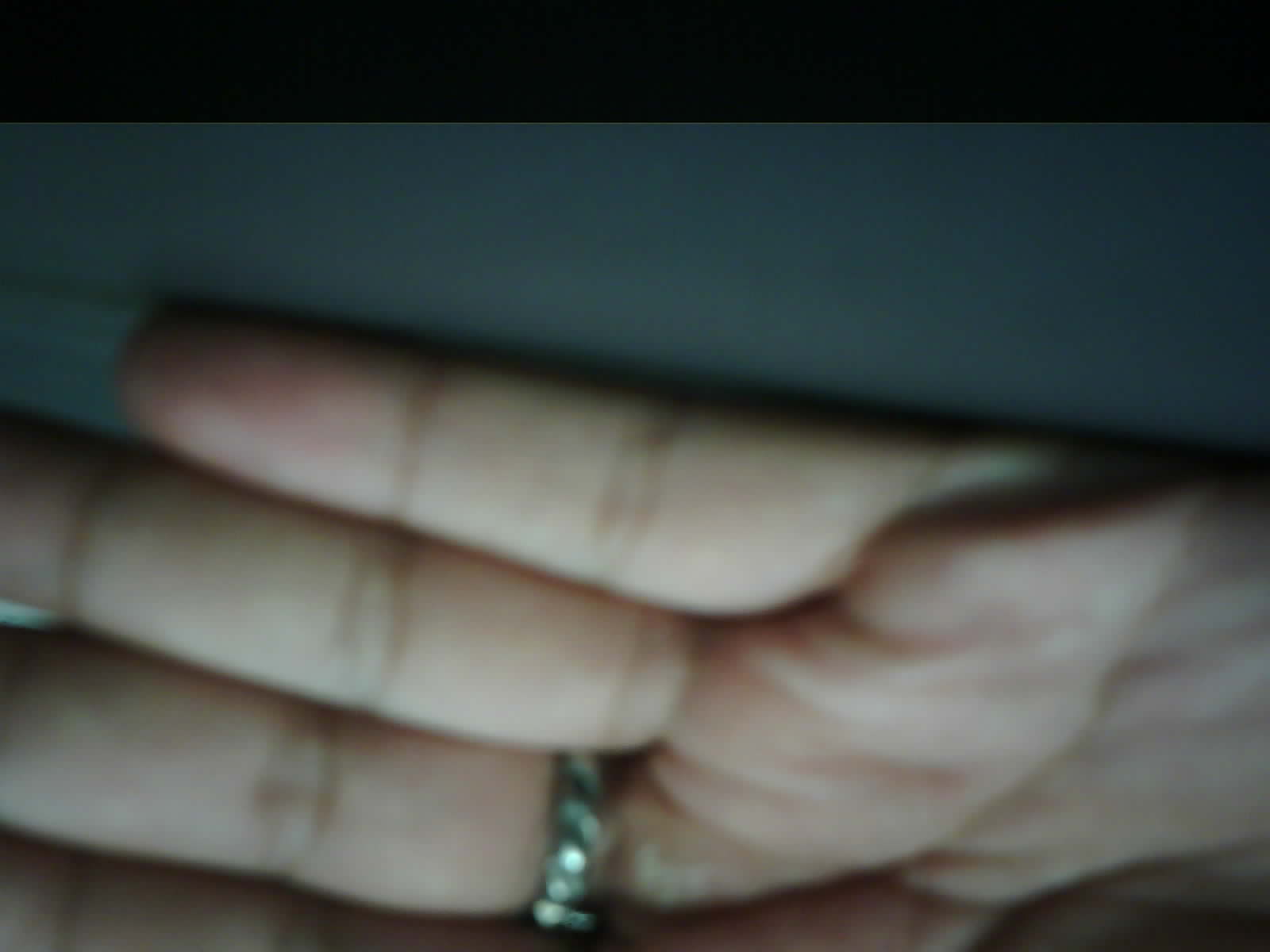 Image of Juan’s hand that was captured in the ICD demo video.

While Mary is out shopping, she notices that a beautiful unfamiliar kind of bird has perched itself on a table in front of her. She pushes the ICD’s red button to take a picture of the bird so she could find out what type of bird it is later. After doing so, she decides to write something about the bird.

Later in the week, she suddenly gets a fantastic idea for a short story  while she’s out and about in Pittsburgh. To ensure she doesn’t forget this idea, she presses the ICD’s blue button and says her idea out loud. She then presses the button again to stop and save the recording. Hours later, Mary uploads the file on her computer, listens to her voice memo, and starts getting to work on an amazing story.

Our prototype was broken into four parts so that we could test each component before combining them. 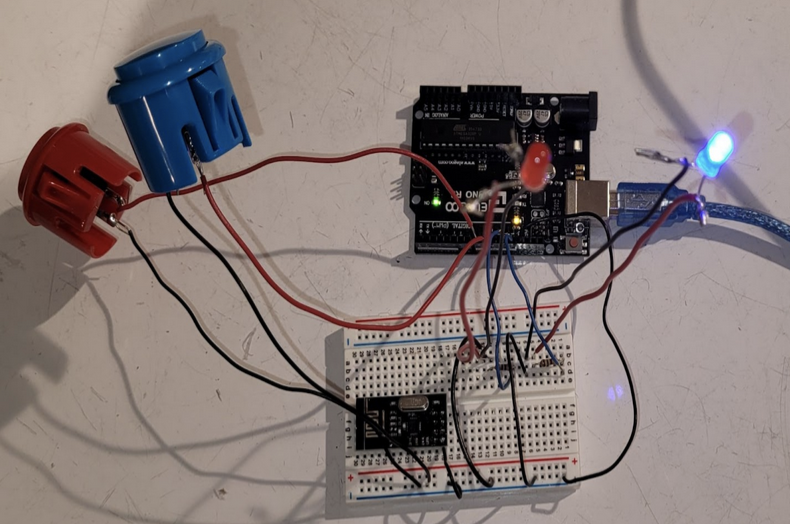 The remote control component of the ICD prototype 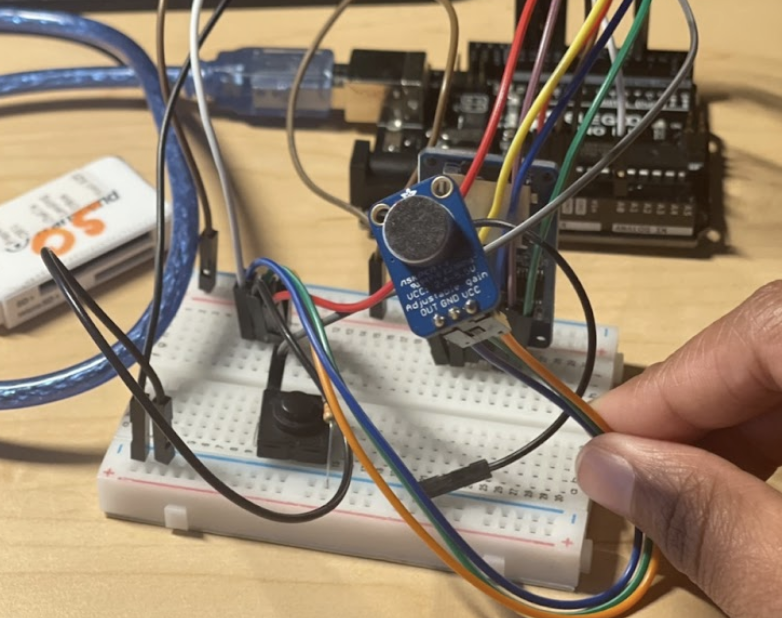 The microphone component of the ICD prototype 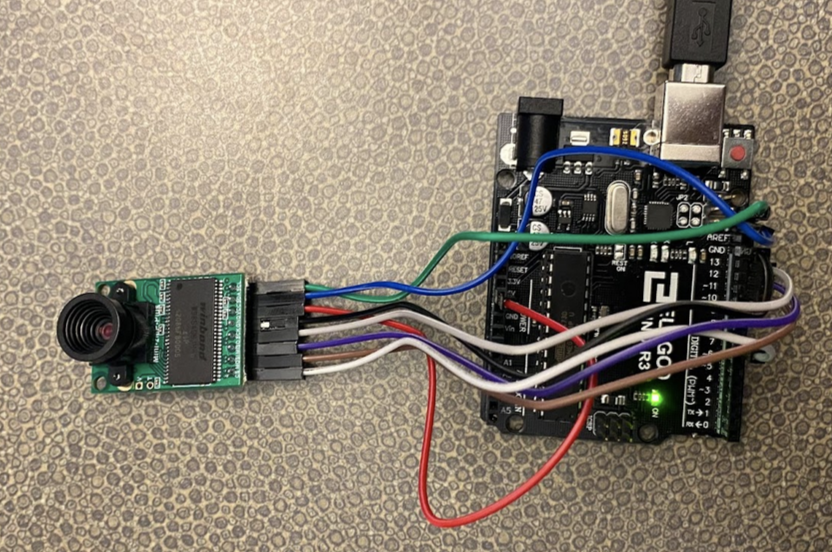 The camera component of the ICD prototype 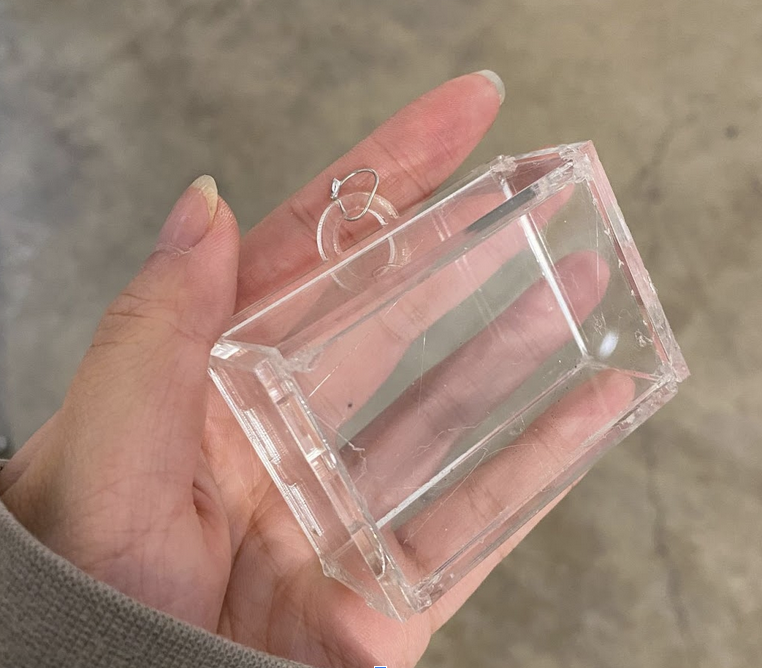 The necklace component of the ICD prototype

The above video showcases the ICD’s simple user interface. 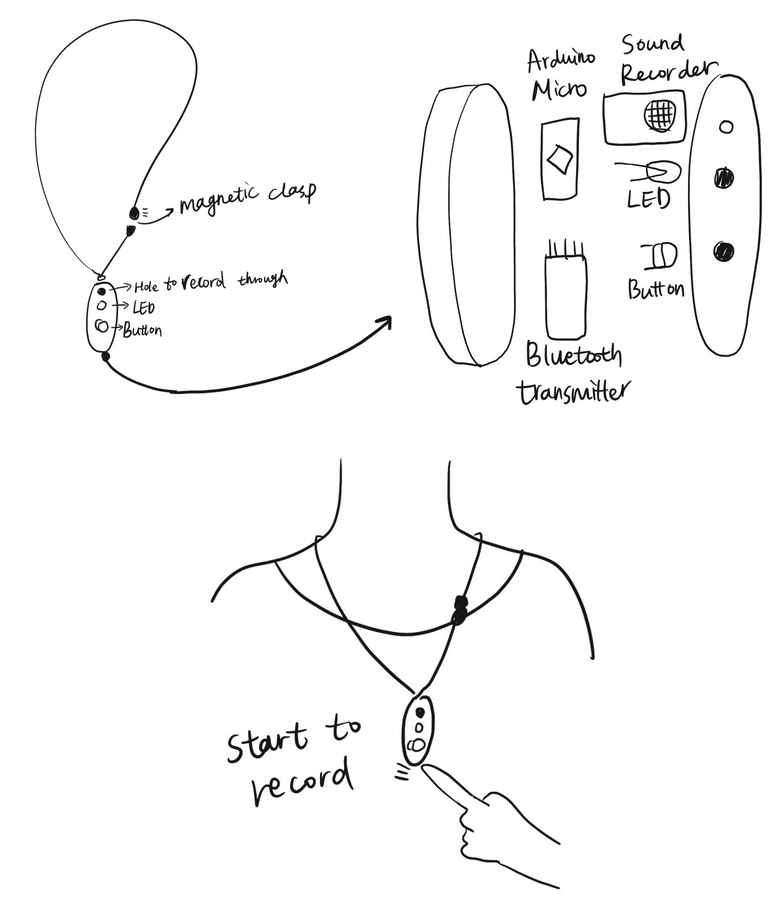 The initial sketches for the necklace part of the ICD

Through our interview with Mary, we found that she is creative and a writer but cannot write down her thoughts quickly, so we created a solution that would allow her to record herself the moment she receives inspiration.

The initial sketch for the remote control part of the ICD

After talking with Mary about our initial sketches and solutions, she suggested that we also include a camera capability because she needs the help of someone else to use her phone camera. We also decided to create a separate remote that housed the camera but also triggered the microphone in the necklace wirelessly to make it more accessible for Mary. 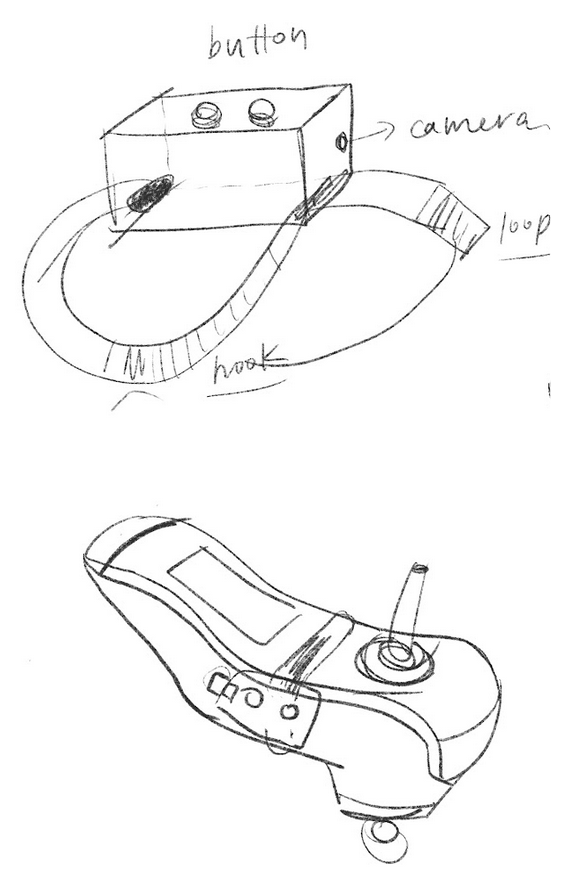 The initial sketch for the attachment of remote

We were trying to figure out the best way to attach the remote to the wheelchair so that it would be easy for Mary to press to record her life. We found that it might be best for remote attachment works like a watch to fix on the wheelchair controller. 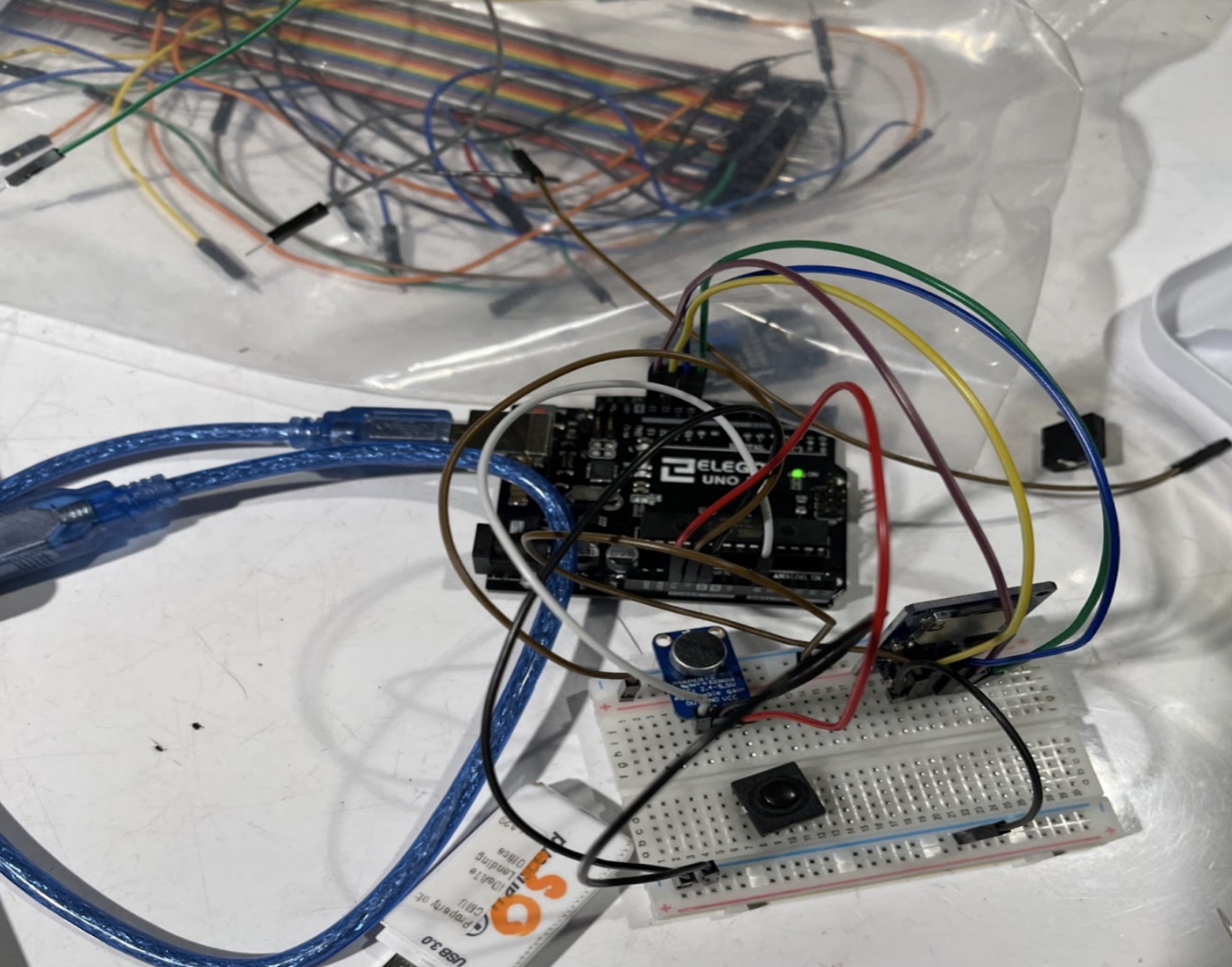 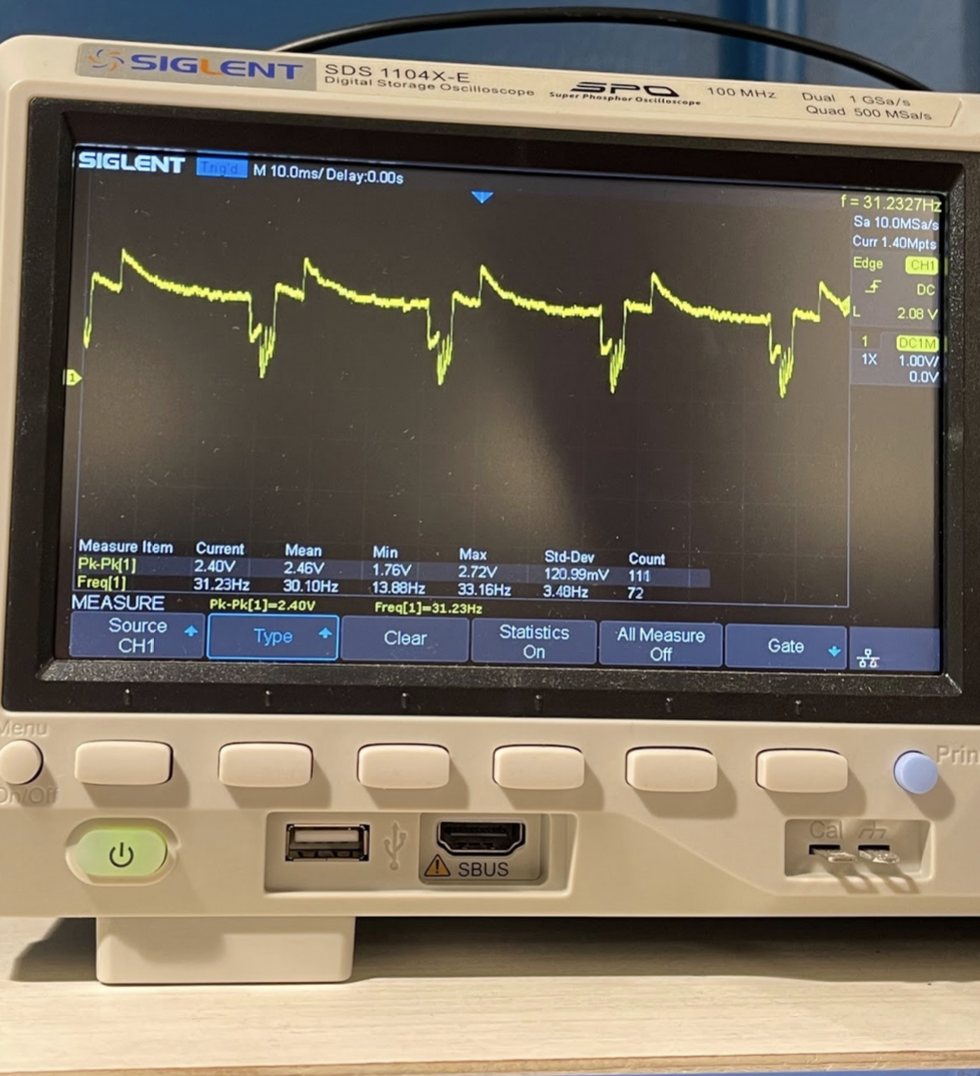 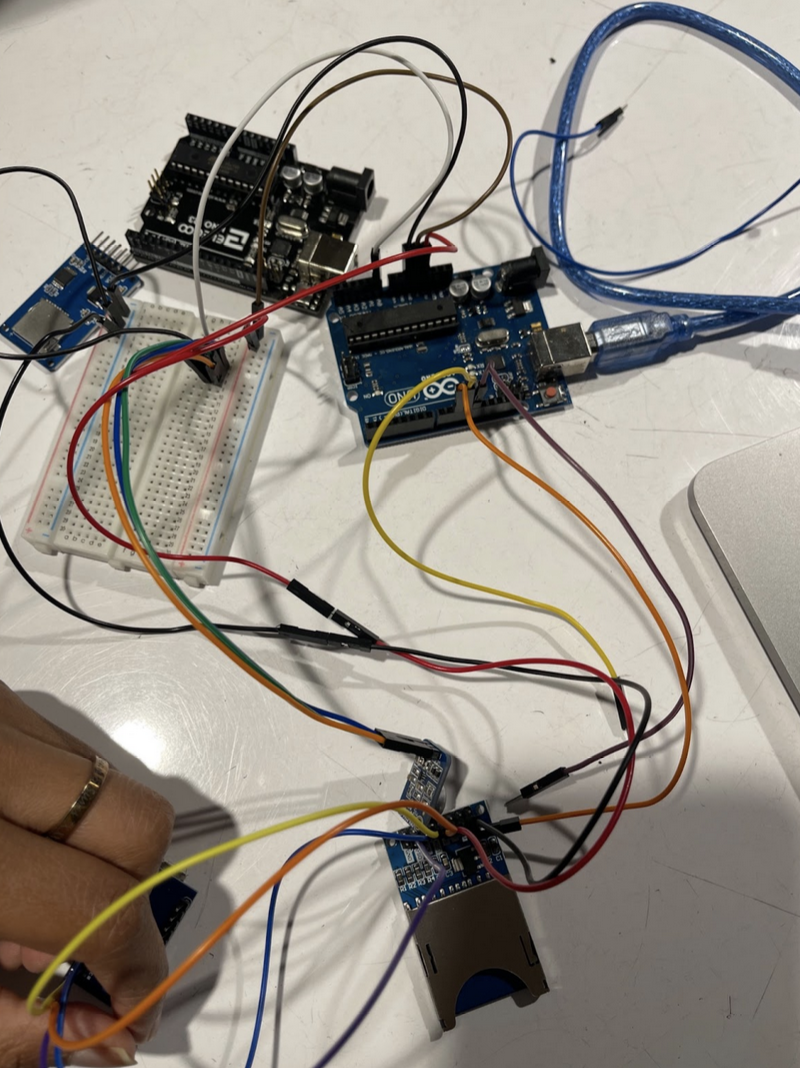 During the prototype critique, we asked Mary to interact with the microphone set up, focusing on how she would insert and remove the microsd card from the reader. We found that reader module was not optimized for Mary’s hands as the sd card was too small and the push mechanism to remove was difficult. And so, we invested in a larger SD card reader. 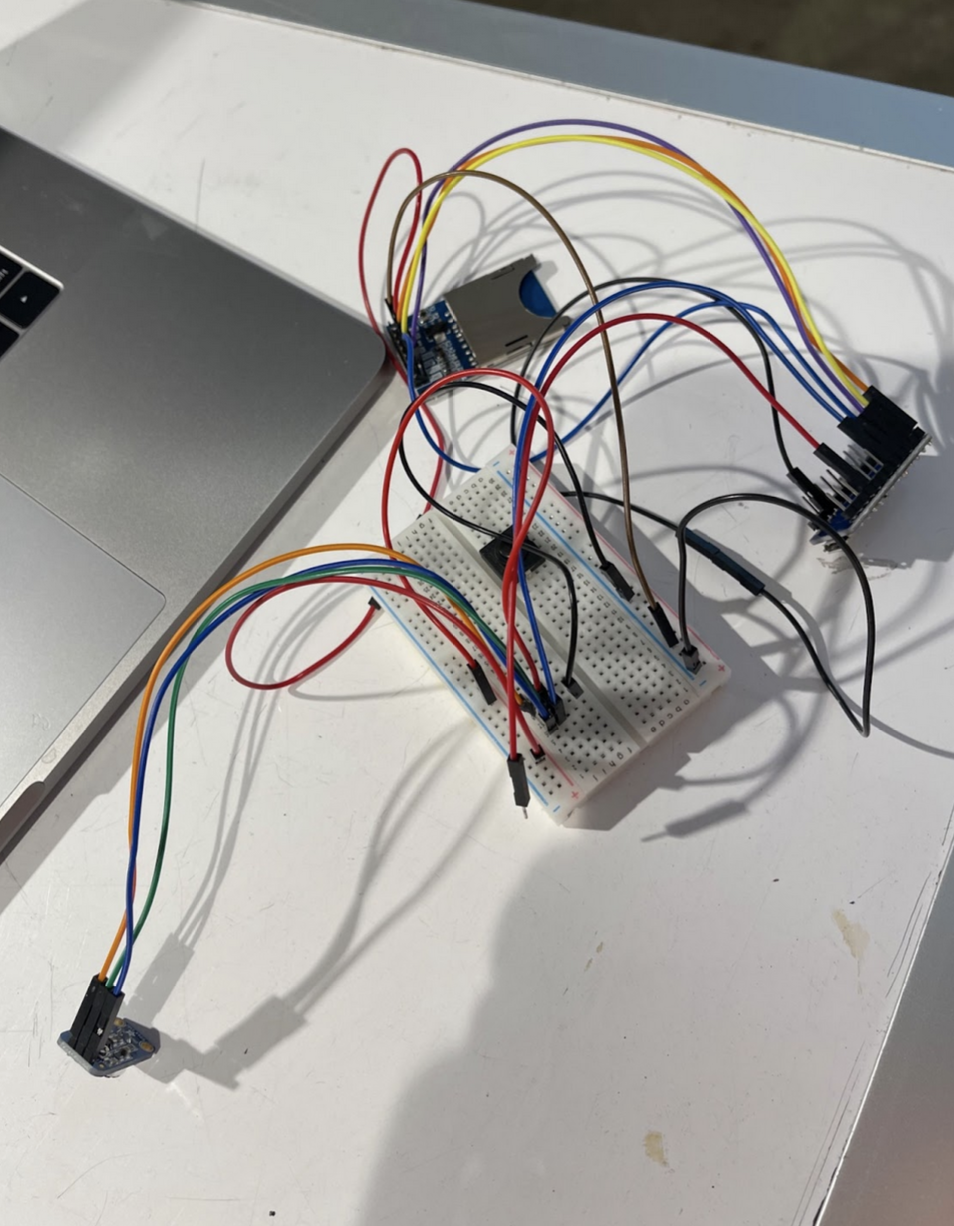 Unfortunately, the noise still persisted. We switched the arduino uno for an arduino pro micro to see if the board made any difference. Our final design would also use a pro micro as it would allow the microphone to fit in the necklace holder. 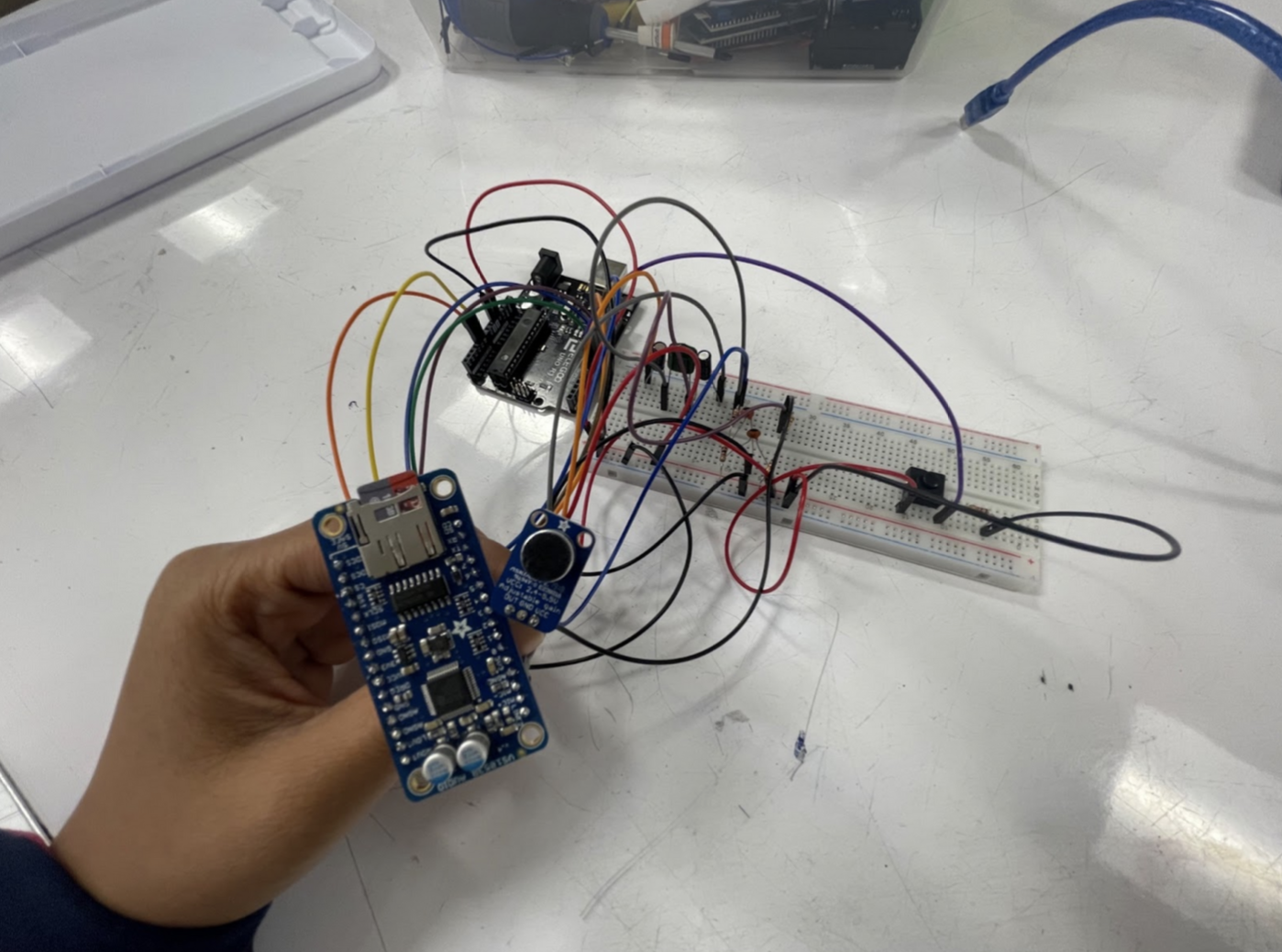 The above change did not fix the noise either. As a last resort we scrapped the SD card readers and invested in a module(vs1053)  that had the optimizations required to cleanly record audio. Given more time we would have fully recorded audio with little noise, but instead the audio files were written to the SD card without any audio.

There were also some issues with other components; a moment of frustration regarding the transceivers in our project should be mentioned: Juan spent an unideal amount of time attempting to debug issues with the wireless transceivers. Unsure if the issue was hardware, software, or wiring-related, hours were lost on his part trying to fix the transceiver problem and could’ve gone towards other aspects of the project. This narrow focus on solving the problem in retrospect was a mistake- the time spent trying to resolve the issue (which ended up being due to a broken transceiver) could have instead been spent assisting Sumayya with the voice recorder component of the project. By the time the solution to the transceiver problem was discovered, it was simply too late to assist with other aspects of the project. This served as a learning experience regarding debugging physical computing components as well as knowing when to cut your losses. In addition, we also had some issues with the ICD’s physical case. 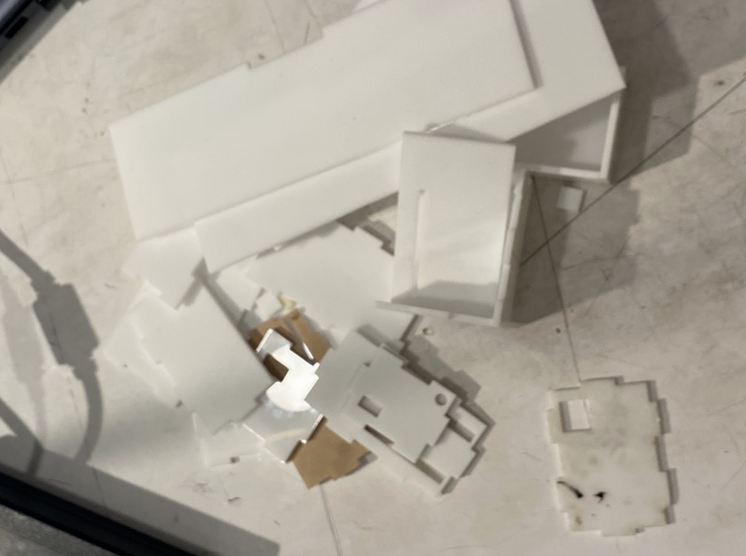 The failed versions of the cases

To make sure the two cases are easy for Mary to use, we have to make them both as small and light as possible. Therefore, every electronic component should be located at its specific place. We did a lot of tests to decrease the size.

Though we each worked on separate components of the ICD, the prototyping process helped teach us a variety of lessons not only about our individual components, but also about working on a physical computing project in general. From questions regarding how our overall project would be powered to what final form it would take, there were several moments throughout the prototyping process where we had to answer questions as a team rather than individually. This was somewhat surprising-even though we were all working on vastly different pieces of technology, the choices we each made on our parts had effects on the overall team project that were sometimes subtle and other times drastic. It was partly due to this that our final version was incomplete- we didn’t truly begin accommodating each other’s work until the final stages of the project. By that point, it was too late to make some much needed adjustments, such as making the ICD’s case less sharp and improving the ICD’s attachment to a wheelchair which were recommended to us from our critiques. We did not intentionally ignore this feedback, but unfortunately we ran out of time to address most of it. 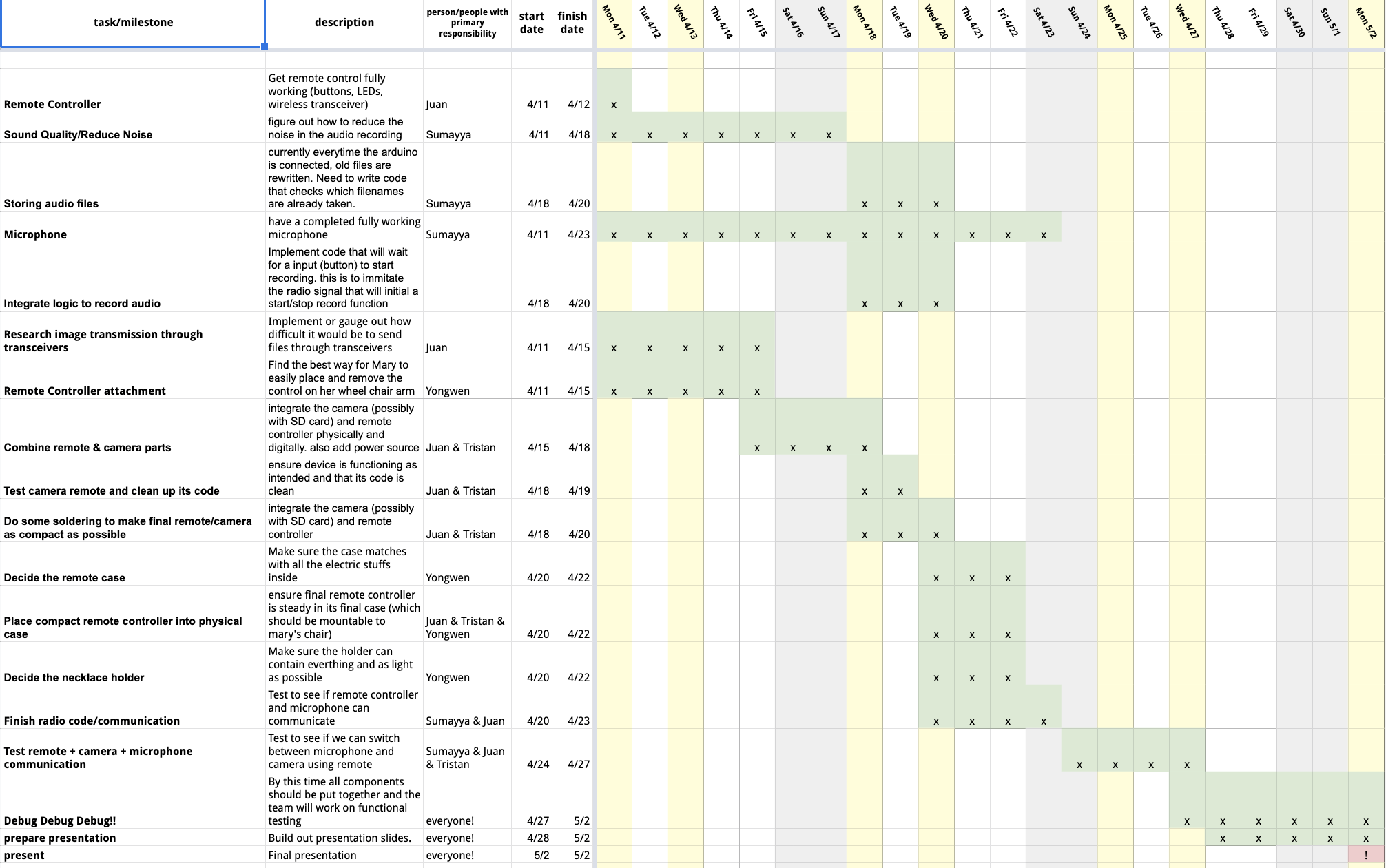 Overall, we were able to roughly follow our Gantt chart to about 75% accuracy. Divergences from our schedule were mainly due to longer than expected debugging times, slow-arriving components that were stuck in transit for longer than preferred, as well as other miscellaneous issues such as group members falling ill during some days.

Some feedback that stood out to us were the following:

The reason why these pieces of feedback stood out to us was because they reinforced ongoing discussions we were already having regarding the direction of our project. Adding “personality” and making file transferring simpler, for instance, were goals we wanted to achieve but didn’t really figure out how to do so. This was partly due to delays in our planned schedule, and ultimately by the time we shifted our focus to the form of our project there was too little time to implement some of the recommended changes. That being said, all of the feedback received was insightful and extremely helpful for possible future iterations of our project.

In general, it was smooth to work remotely. At the first beginning, we lost contact with Mary but we got into a collaboration with her successfully soon. Sometimes we did different parts of the project individually but we still cared about the work from each other. Everyone put a lot of effort into this project and often continued working after class alone. If we had another chance to work together remotely, it might be a good way for better collaboration by updating the process once after work.

Takeaways from working with Mary

This journey looked like we were doing a device to help Mary, but literally it was Mary who inspired us a lot. She never gave up her love towards life though her mobility was limited. She had her own hobbies and work, her life was so adorable and she got a lot of sense of achievement during her tutorial work. “I really enjoy my life.” Mary said in her first interview with us. At that time we four were all touched by her strong positive vibe.

Even though our final prototype was somewhat distant from our original vision, the process we all went through while working on the prototype was very educational and insightful. We each learned different things about not just our components, but about the process of prototyping a physical computing project as well as working as a team in general.

Given a second go at the project knowing what we know now, our biggest changes would have to do with how we worked on the project in general. Our decision to split the ICD into four separate parts, one for each member, seemed like an obvious one at first but in retrospect proved to be a hindrance in the final stages of our prototyping process. Since we were all the resident “expert” on the part we were working on within the group, having a group member absent severely hampered our ability to move the project forward. This hurt us a lot after carnival, where some members of the group got sick and as a result had to miss some work sessions- negatively impacting the whole group’s progress.

A possible solution would be to assign two members to each component. This would greatly help with the aforementioned absence problem, and it would have also had positive effects on each component itself since there would be two minds tasked to making progress on each part instead of just one. Additionally, we would also resolve certain prototype issues, like choosing a battery and final form, as soon as possible instead of saving that for the very end given the importance of accessibility for our client.

Some other takeaways include establishing a debugging process for components early on, not underestimating the soldering process, properly gauging capabilities/knowledge early on in the process, and removing/combining features earlier! These takeaways were largely individual- Juan’s takeaway (the debugging process) was the result of too many hours spent trying to debug what ended up being broken components. Sumayya’s, on the other hand, centered on her experience tackling the complicated voice recording system. Instead of pivoting to a different direction earlier, her various attempts to get the component working backfired as other components that were behind in terms of progress would have made major use of an extra mind. Yongwen and Tristan also had their fair share of takeaways stemming from their assigned components. Overall, however, we can simply say that each one of us learned something valuable about our very own approaches to different problems. 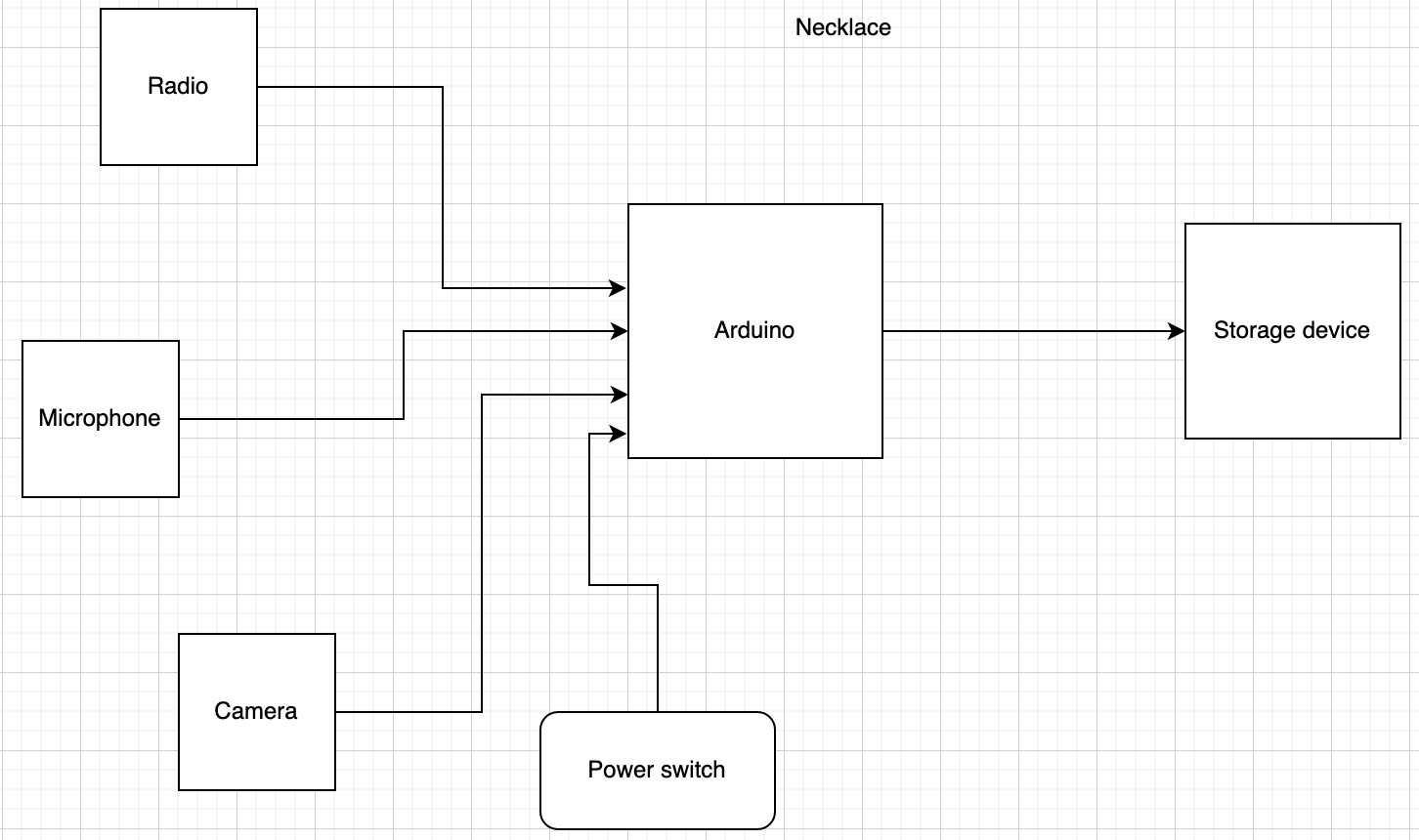 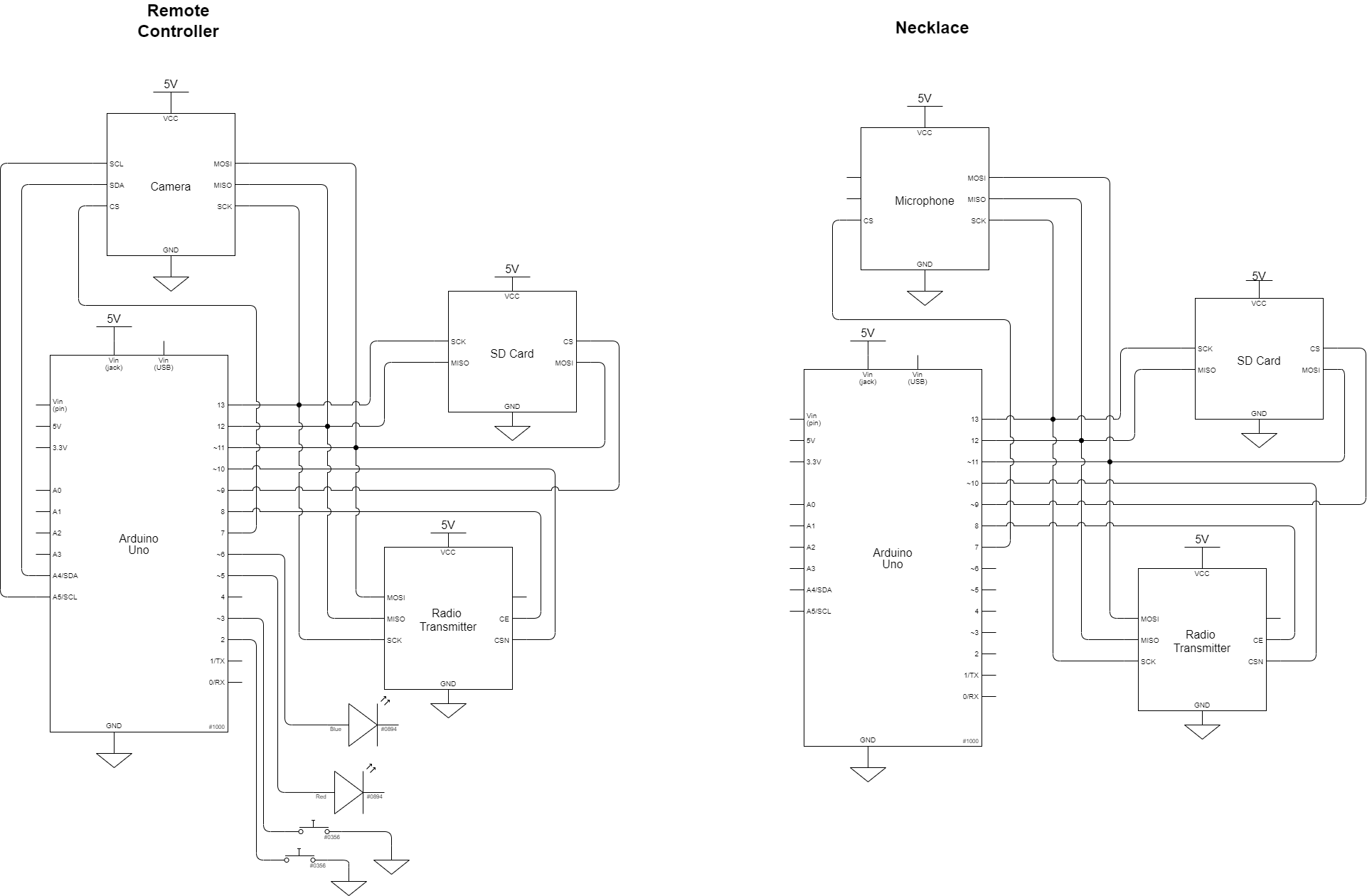 Special thanks to Professor Zacharias and everyone else who helped us get so far!