My project 2 was an alarm clock specifically meant for taking naps and incentivizing you to not hit the snooze button. 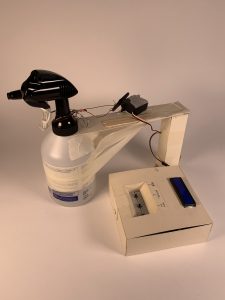 Here you can see all of the components of the machine, primarily being the main box with all of the electronic components as well as the spray bottle mechanism with the servo motor bridge 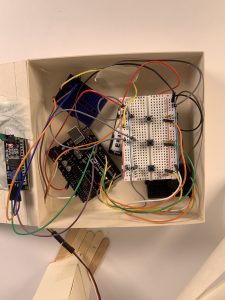 Here is a view of the inside circuitry, where you can mostly see the breadboard, which lies on top of the battery pack, and the hook up to the LCD display in the lid. 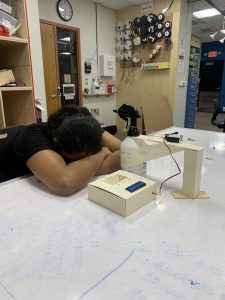 Here’s a view of how I would intend to use the machine, probably laying head down on my studio desk with the spray bottle over my head to spray me. 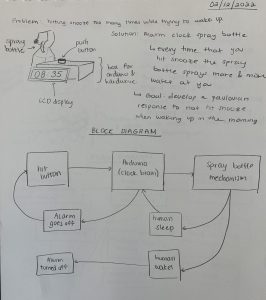 Above I show the earliest part of my design process: where I first came up with the idea for “The Anti-Snooze Machine”! At this point I had not yet decided how I was going to actually cause the spray bottle mechanism to spray water, but I was thinking of having it held down and then a servo motor hitting it to push the lever. However, because of the amount of error that could be incurred with finding the angle for that, instead I decided to use a pulling motion instead with some wire. 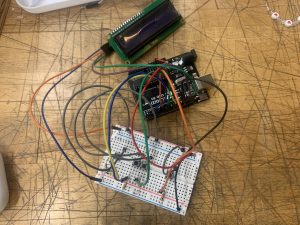 This is my project in the early stages of the design process, when I was making my prototype. At this point I had to decide how I was going to move through the functions of my alarm clock function. I decided that having three different buttons would be the easiest way for me to assign the different functionalities to them and also make the user interface not as dependent on the same hardware. I actually ended up adapting from a four button format to having a three button format, incorporating a “next” button to help me move through different functions with my code. 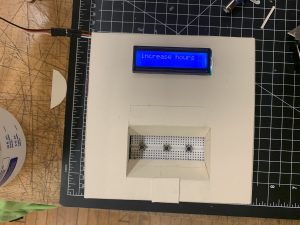 When facing the final assembly of my different parts, I wanted to create a clean exterior that wouldn’t be annoying to figure out for someone who is just waking up. Since I needed a solid backing on my buttons so they can be pressed fairly aggressively, I decided to keep them on the breadboard and instead use the casing to hold the wires down the sides. I found it to be more affected carving down into the box to create the opening to the buttons instead of bringing them up to the surface.

Some design decisions that I might have made in retrospect include getting a stronger servo or pulling mechanism so there was less uncertainty with the spray mechanism working. Furthermore, I wish I had a cleaner looking outside portion for the spray bottle instead of a more pieced-together hold for it.

During the final critique for this project, I feel like I had a few highs and a few points of improvement that could have been made. For instance, many people liked the design of my box, which held the power source, arduino, and other wiring components. Specifically, people said that they “love the design of the box” and that it was “really well thought out”. I was really happy to hear that the design of the final product was clean and well appreciated since I wasn’t able to get those parts laser cut as I had originally intended to do. On the other hand, it was pointed out in my feedback that for one person, “as a chronic snooze button presser, [they] could see [them]self getting used to the water spray” and that it would be beneficial to vary the consequences of hitting the snooze button. With this in mind, I would consider adding different levels of alarm, maybe changing the volume to increase as the snooze count increases. I would try incorporating more complex consequences, like launching a soft foam ball or something along those lines, but it was also pointed out to me that “it would be cool if the box and water spray bottle were incorporated into one form so it takes up less space on the desk”. The design is a little bulky as it is, so I would have to adjust the components to make it take up less space or avoid adding a lot of different parts. In light of the positive feedback and despite the negative feedback, I was overall very pleased with the way that my project came out; it was very mechanically demanding to get all of the parts assembled together and I think I did the best I could with putting them into one form. I think I could have been a little more consistent moving across the whole piece, making it out of the same material instead of changing the spray bottle mechanism material from pulp board to tape and popsicle sticks. All in all, I think I found that my strong points in the design and development process were the aesthetic appeal of the final product and getting through the software component of the design, but I think I was lacking when it came to the mechanical build and should have thought to compromise on the initial design that I had to create a more consistently functional final product. I think that the next time that I go through a similar process, I should be more flexible in getting to my final product and adjusting the ideas I had for the mechanical parts to overall work better. For this project in particular, I think if I were to create another iteration I would try out different ways of triggering the spray mechanism so that it functions more consistently. 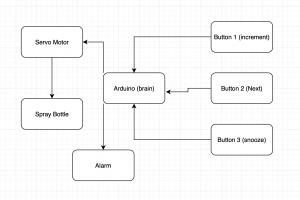 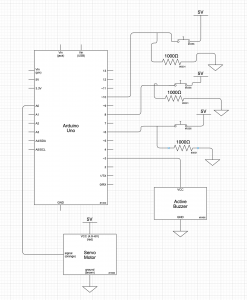