A device to help lock away your phone for a specified amount of time so you can focus on tasks at hand. 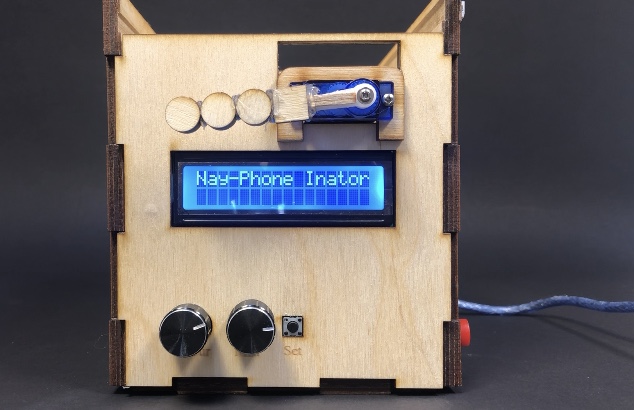 An overall photo for portion and scale. 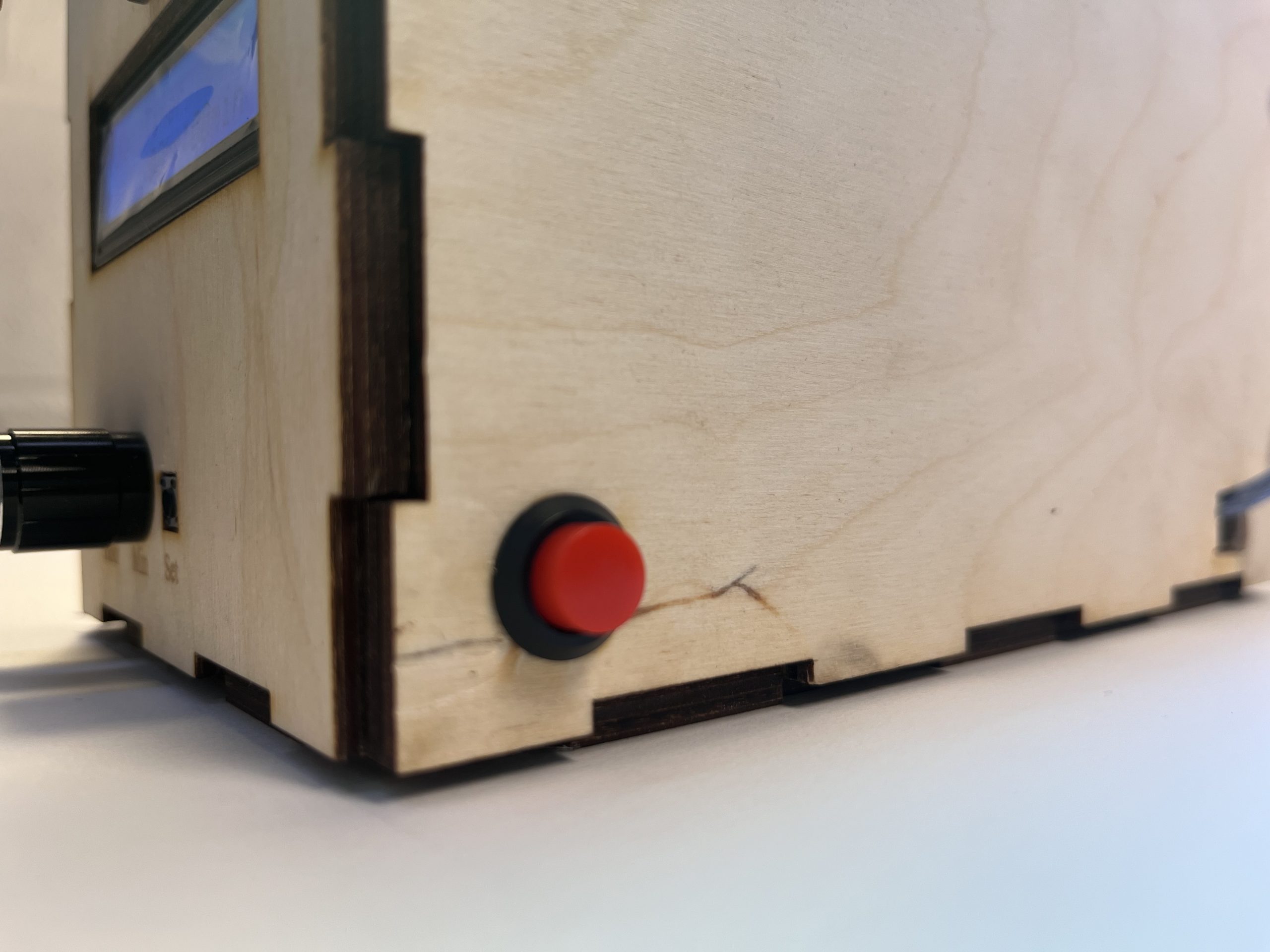 The “self destruct” button 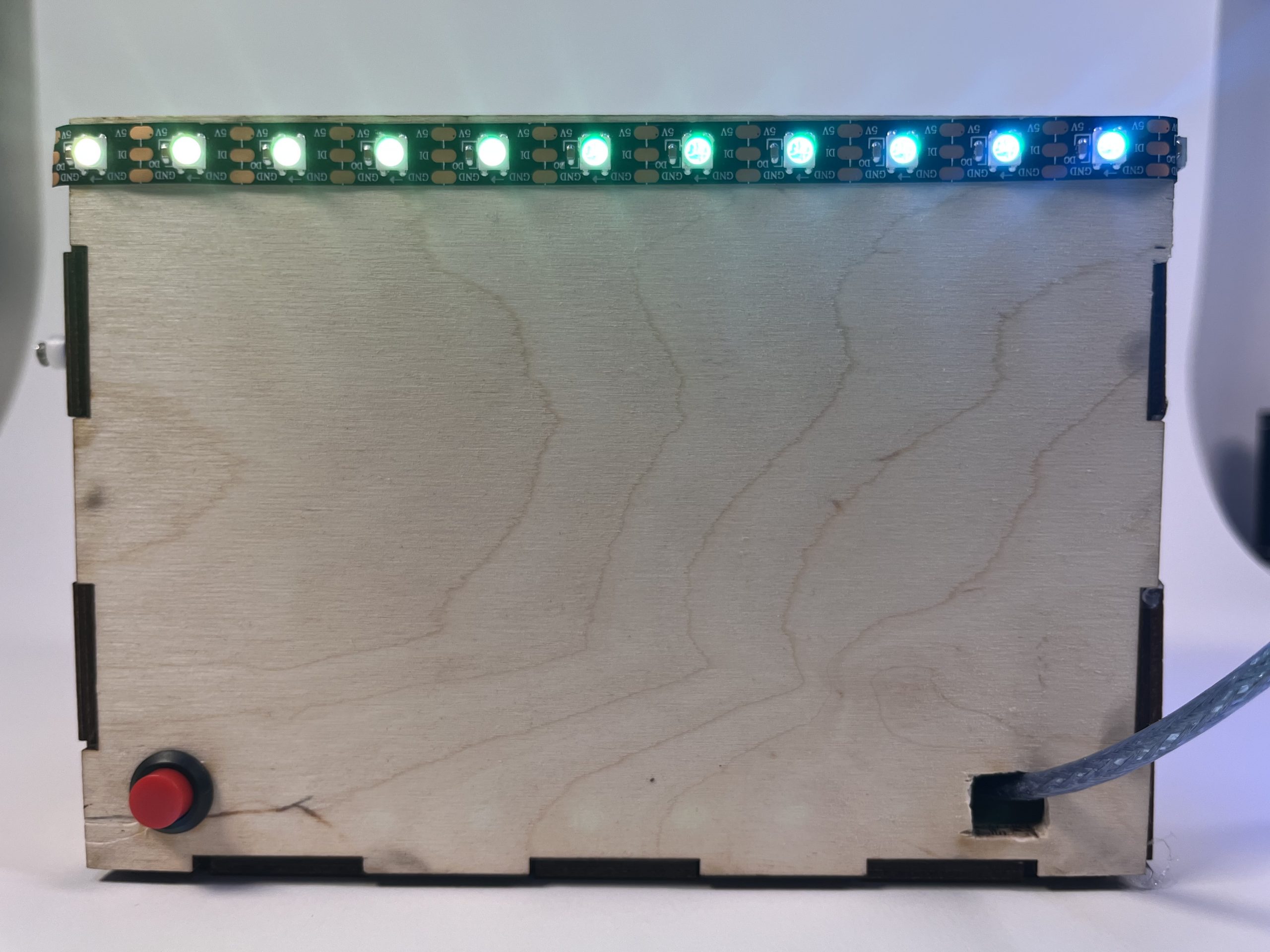 The LED strip on a wall of the box. 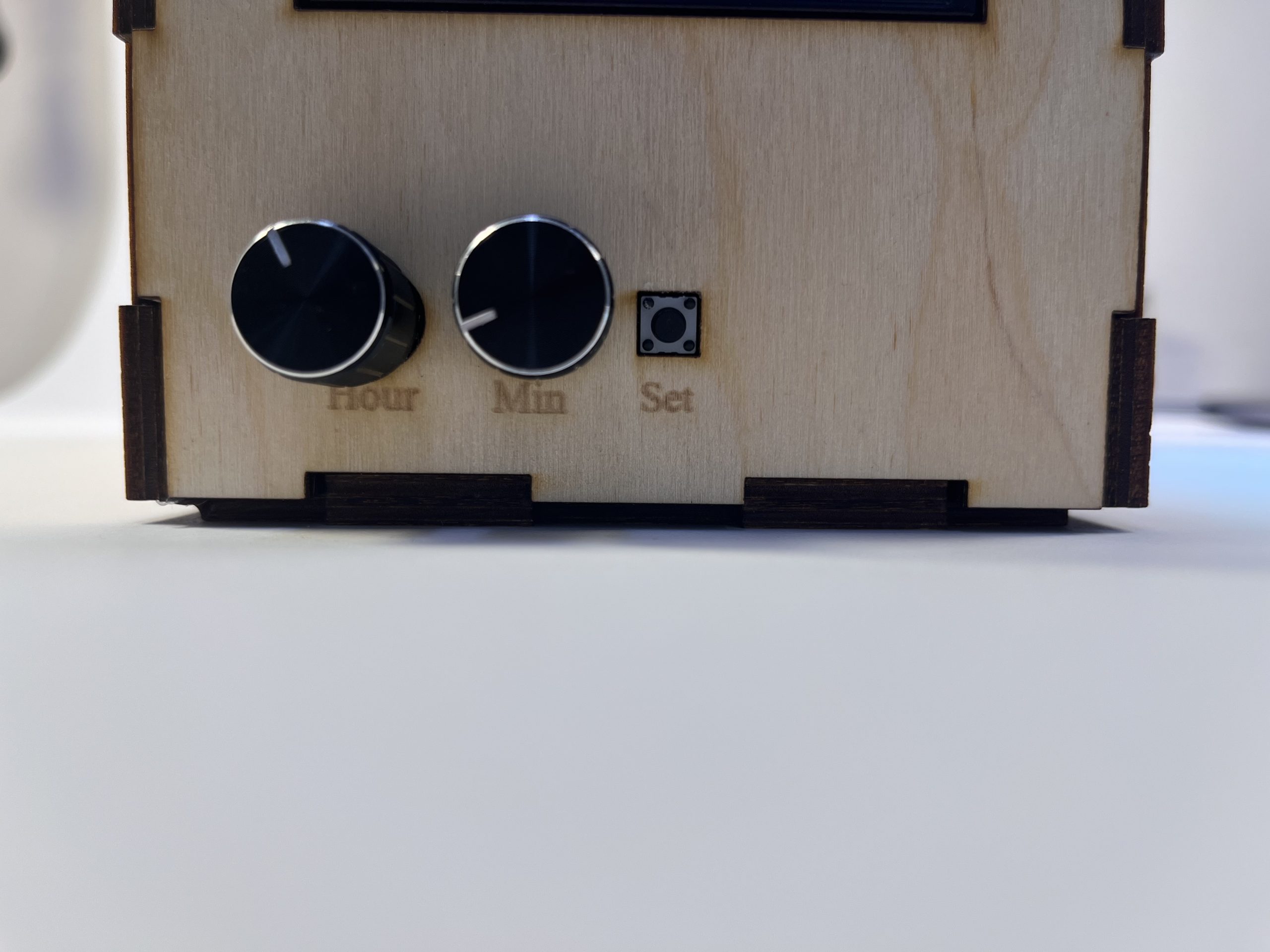 The Hour and Minute dials as well as the Set button. 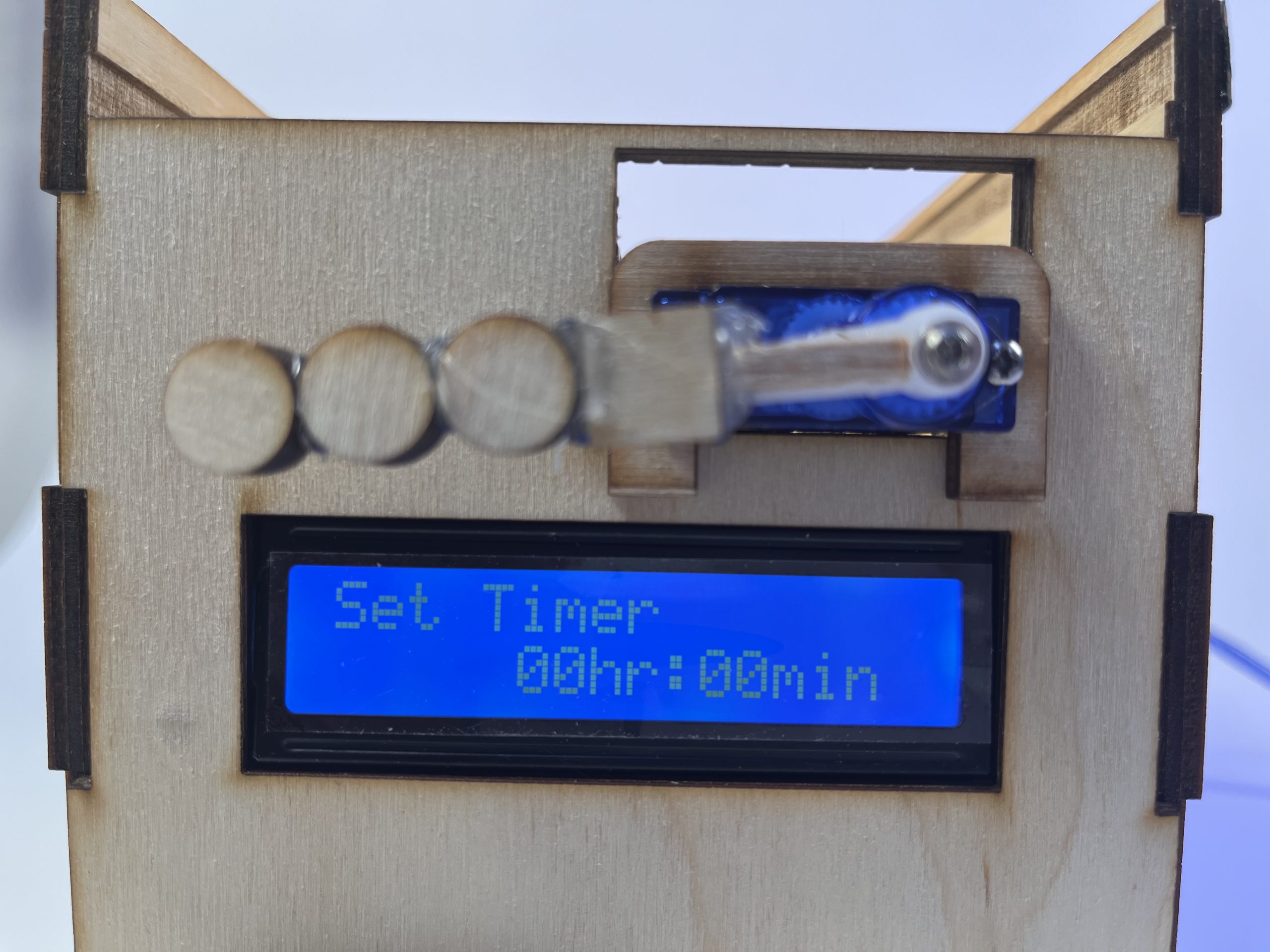 The use of the LCD screen. This shows the main feature which is the Set Timer feature, it also shows the top unlocked (i.e. the servo lock is down) 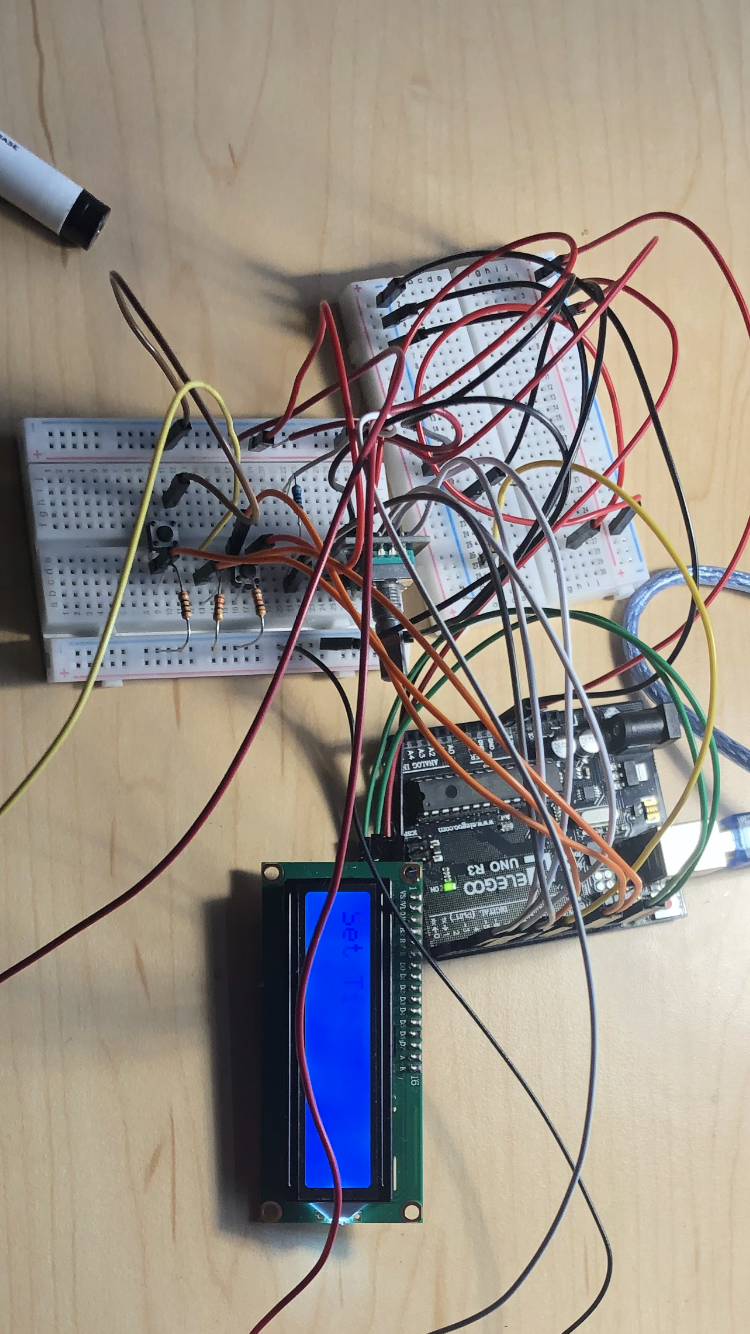 This was a decision point when I determined that two rotary encoders was better than one. This was a big decision because I always intended to use 1 and utilize the button feature on the encoder to switch between hours and minutes – but I realized that using 2 was much more efficient. 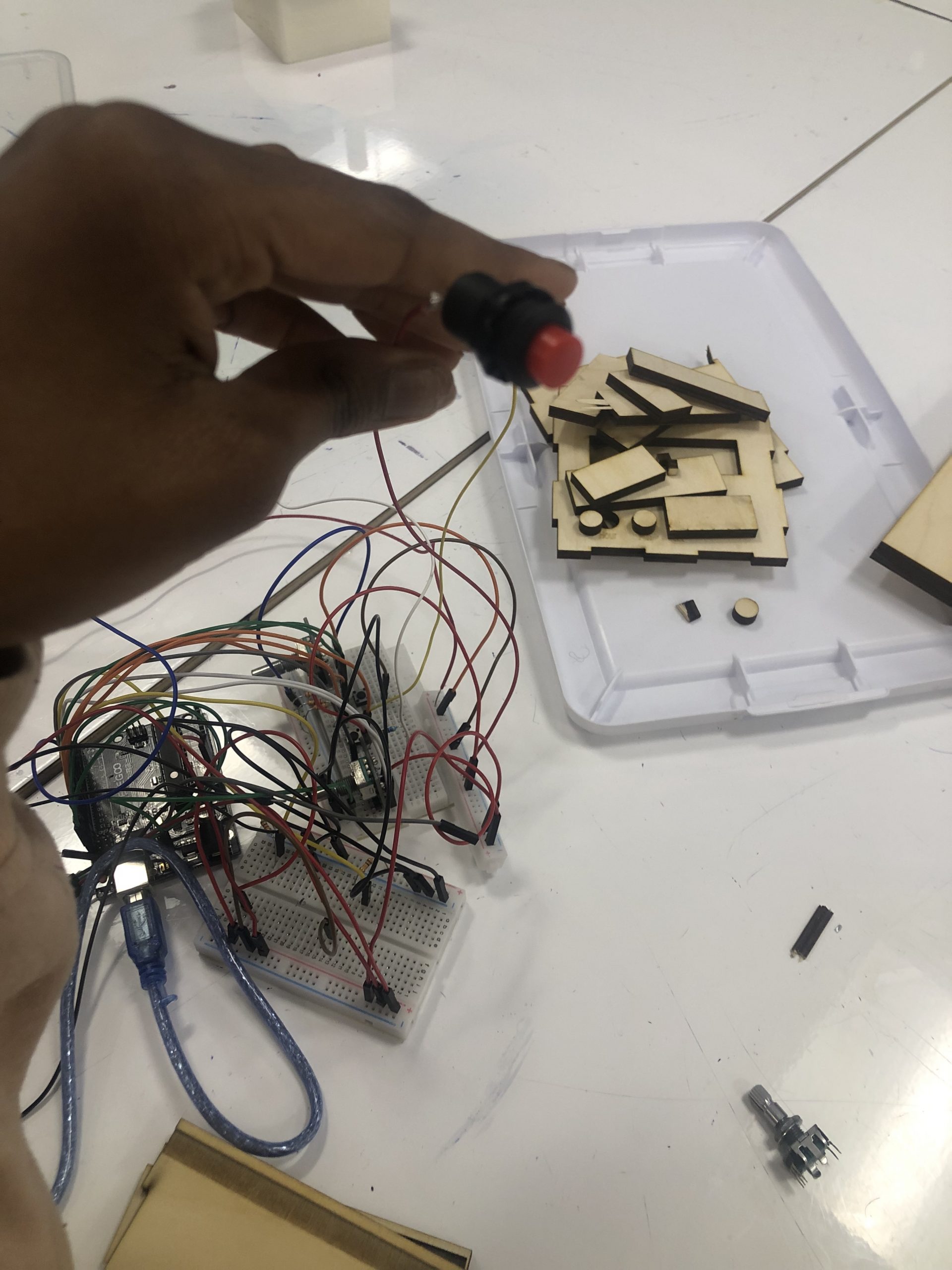 This was a major decision point. Due to how hard it was for me to get the timer to work properly, I had originally scrapped the idea of a self destruct button. However, I really wanted to cover the use case of me needing my phone before time was up so I took a leap even though I was low on time – and included the self-destruct button/all of it’s code. 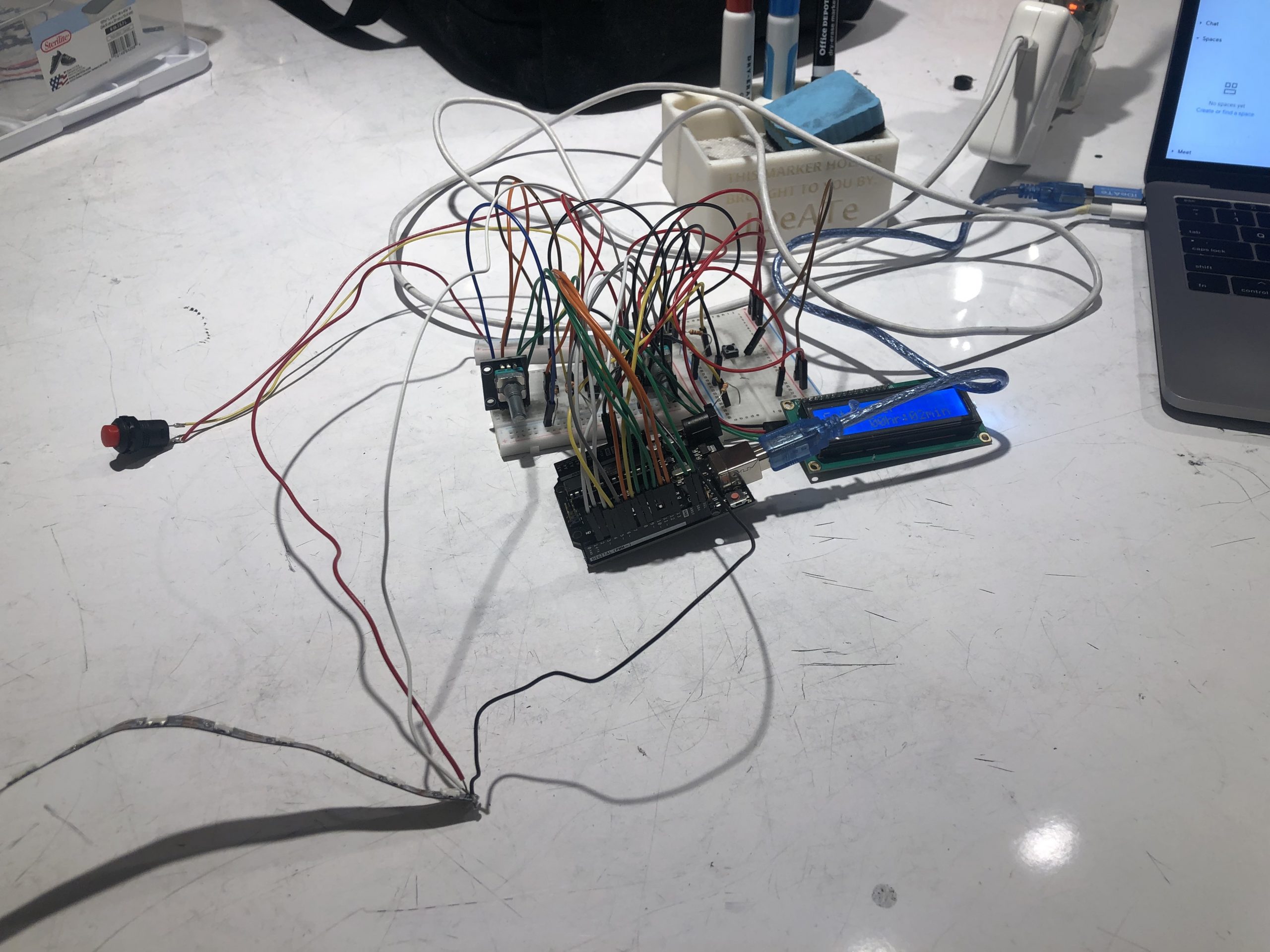 This is right when I started the assignment. The goal at this point was to get all of the components functioning on the Arduino singularly and then to have them signal to each other. 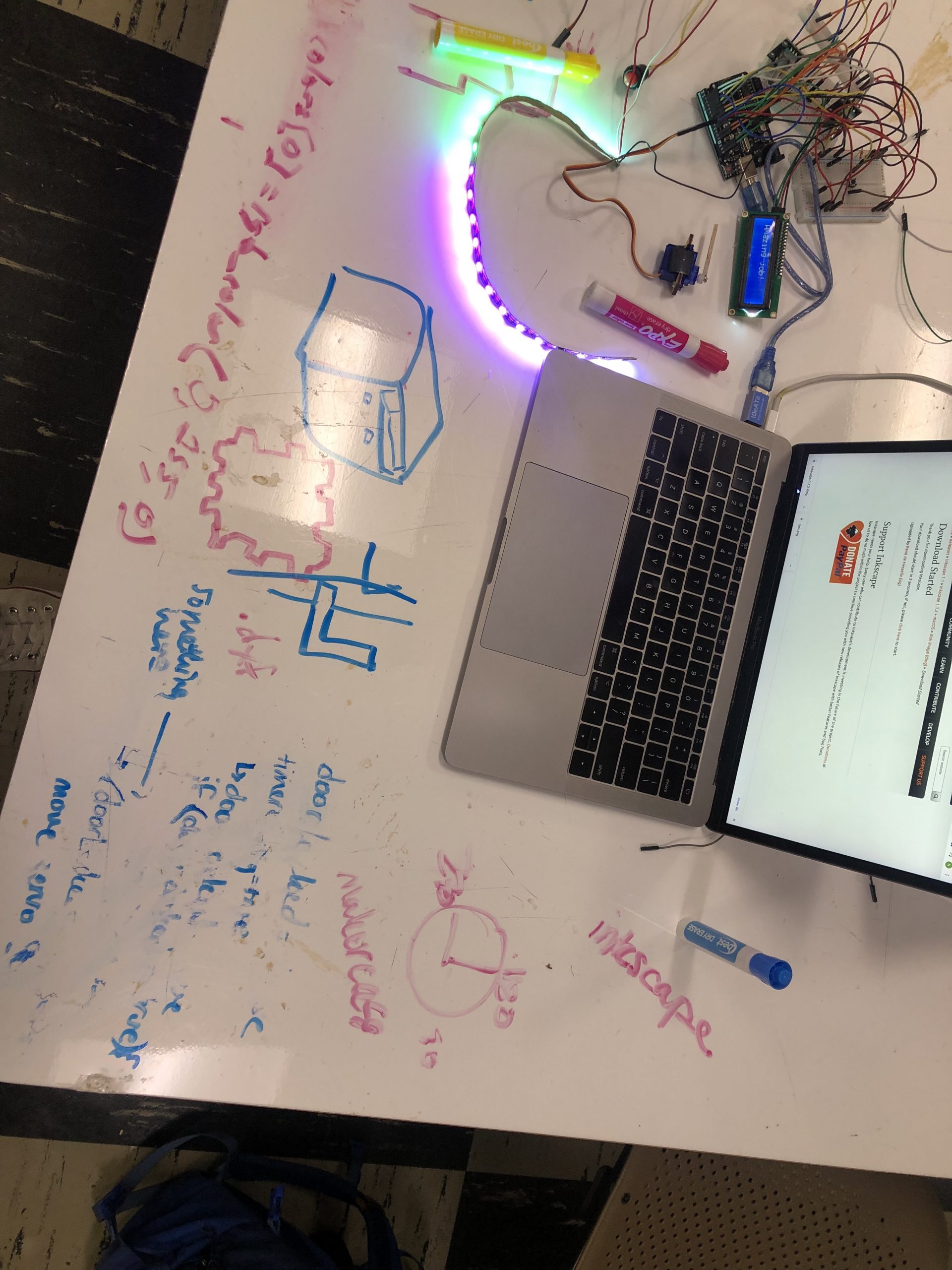 At this point, all of the components worked (servo, LED strip, etc.) except the timer didn’t function properly so nothing worked “together”. 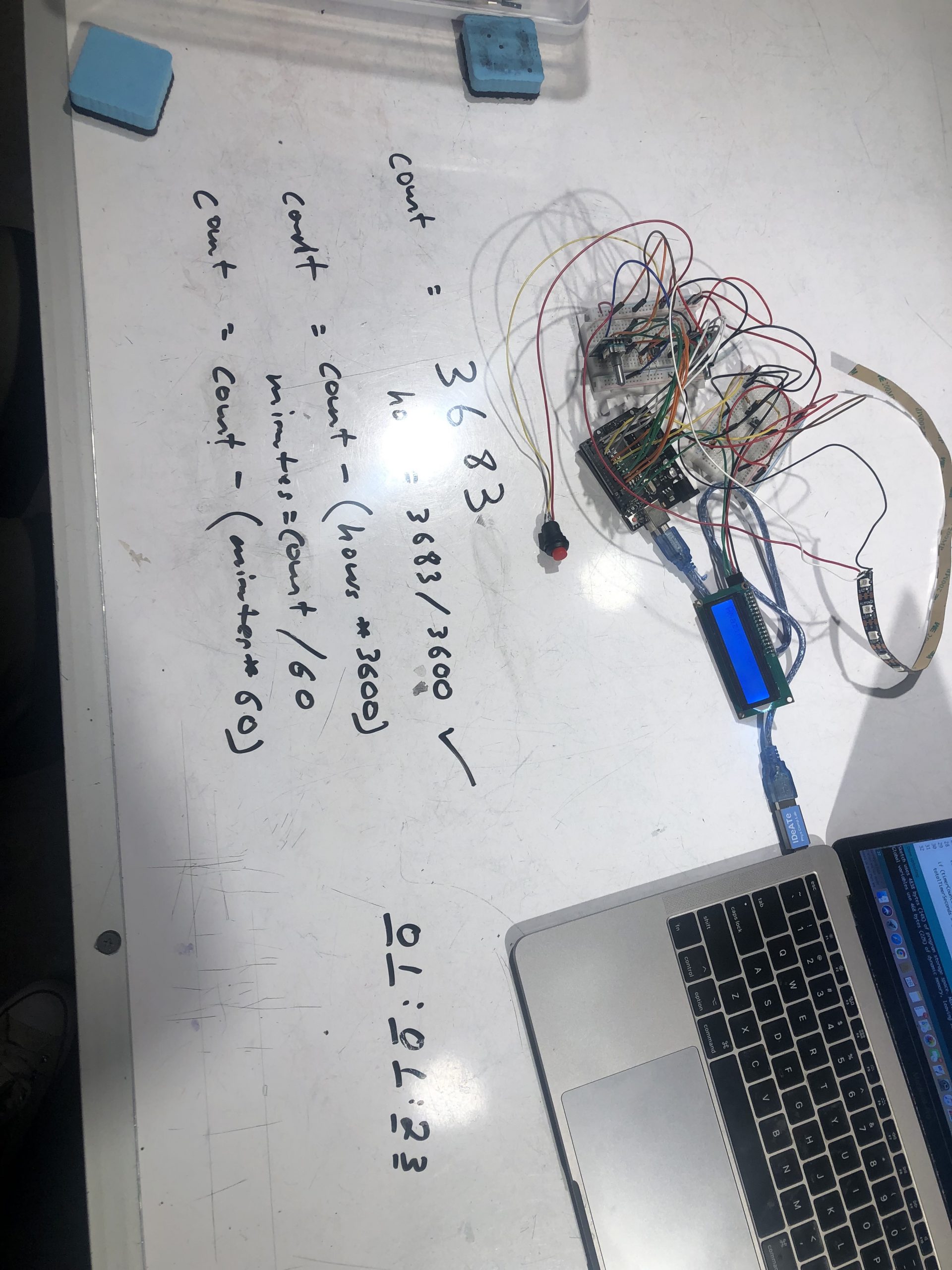 This is after Zach walked me through the logic of the timer and I was finally able to code it so it functioned properly. 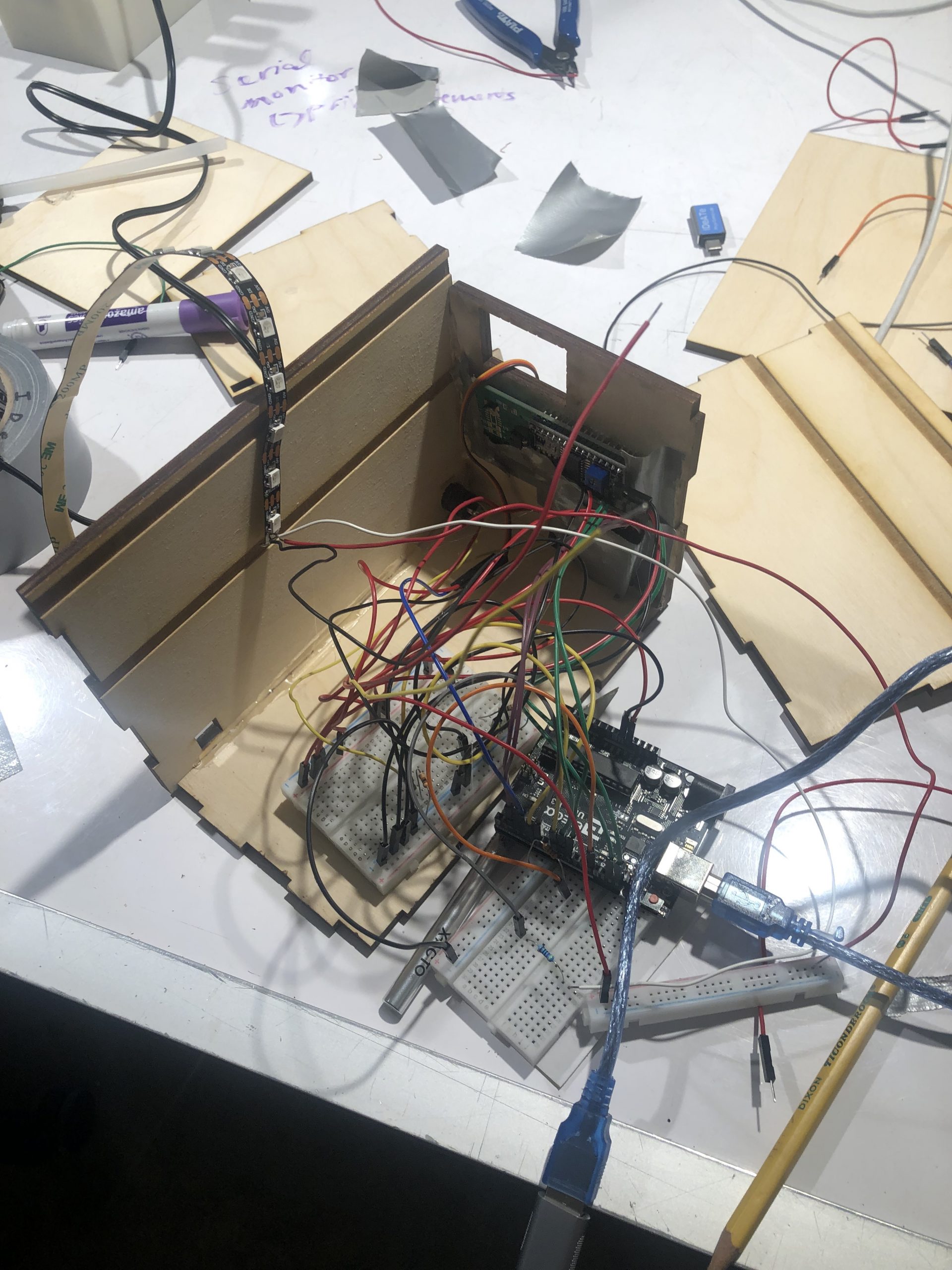 This was the point at which the electrical components all worked, and the box had been laser cut, and the biggest concern was unwiring and rewiring everything to fit nicely inside the box, as well as getting the box to stay together as I did that.

The in-class critiques that I got were mostly just positive attributes that classmates appreciated about the design. It didn’t really give me much to move forward with, but it was good to have my design decisions validated. One person commented, “I thought the name was very cool and I liked the use of a tactile button to control the timer.” I really liked the idea of the project and what I was making so I put a lot of time into designing based on what I would like to use. I’ve always wanted an “inator” so it seemed like a perfect time to create something like that… thus the name. Another person commented “It looks like a lot of the components of your project are working really well together. I also like the LED use”. When conceptualizing this assignment, I wanted to create something simple enough that I could do everything I needed to do within the ~two week span we were allocated. Thus, all of the components of my project – the LED strip, the LCD screen and timer, the self-destruct button… It was all in an effort to finish the project on time and create something I’d want to use. So I appreciated this comment because I sought to be very intentional.

This project was unexpectedly challenging. I anticipated a walk in the park on a day with old snow (fumbling/tripping on dirty snow, a bit of slipping on ice – but ultimately being fine), but instead my casual walk included me getting wrapped up in a tornado and spit out at the end of the park. Thus, all of the components (LED strip, buttons/dials, etc.) came together somewhat easily and overall didn’t take more time than anticipated… but the timer was the tornado. I didn’t expect the logic and coding of it to be some math-heavy and difficult. I worked an entire weekend without getting anywhere, and restarted the code from scratch twice to make it work. In retrospect, I would tell myself to not overthink the logic and to go down the math route rather than scenario planning for each individual component of the timer (hour, min, sec). I also wish I hadn’t gotten too hung up on the timer – I think it would have benefitted me more to move onto the actual box/laser cutting while I waited and tried to debug the timer. However once the timer was completed, all the other components came together within two days and there were no more major storms on my walk.

Overall, I’d say I’m very proud of this project. It satisfied all of my goals and created a project that I honestly intend to use for years to come. In fact, I’d say I satisfied my goals almost to a fault. After seeing other people’s projects – I realized I could have gone even further. For example, I have a lamp that has 3 slots for USB’s, so I didn’t include a battery pack or an on/off button on the Nay-Phone Inator, instead I just left it for a USB input because that is what fit my specific needs. Also things like what happens after the self destruct button is pushed. The idea was that after the self-destruct button and phone retrieval, you simply unplug the USB (because why would the device need to be on if you had given up?), but in the final critique some people seemed surprised that there was no way to return to the Set Timer screen after the phone was retrieved. So I think small things like that would actually be my Next Steps. I don’t plan to build another iteration of the project, but if I did – I would address those small details. 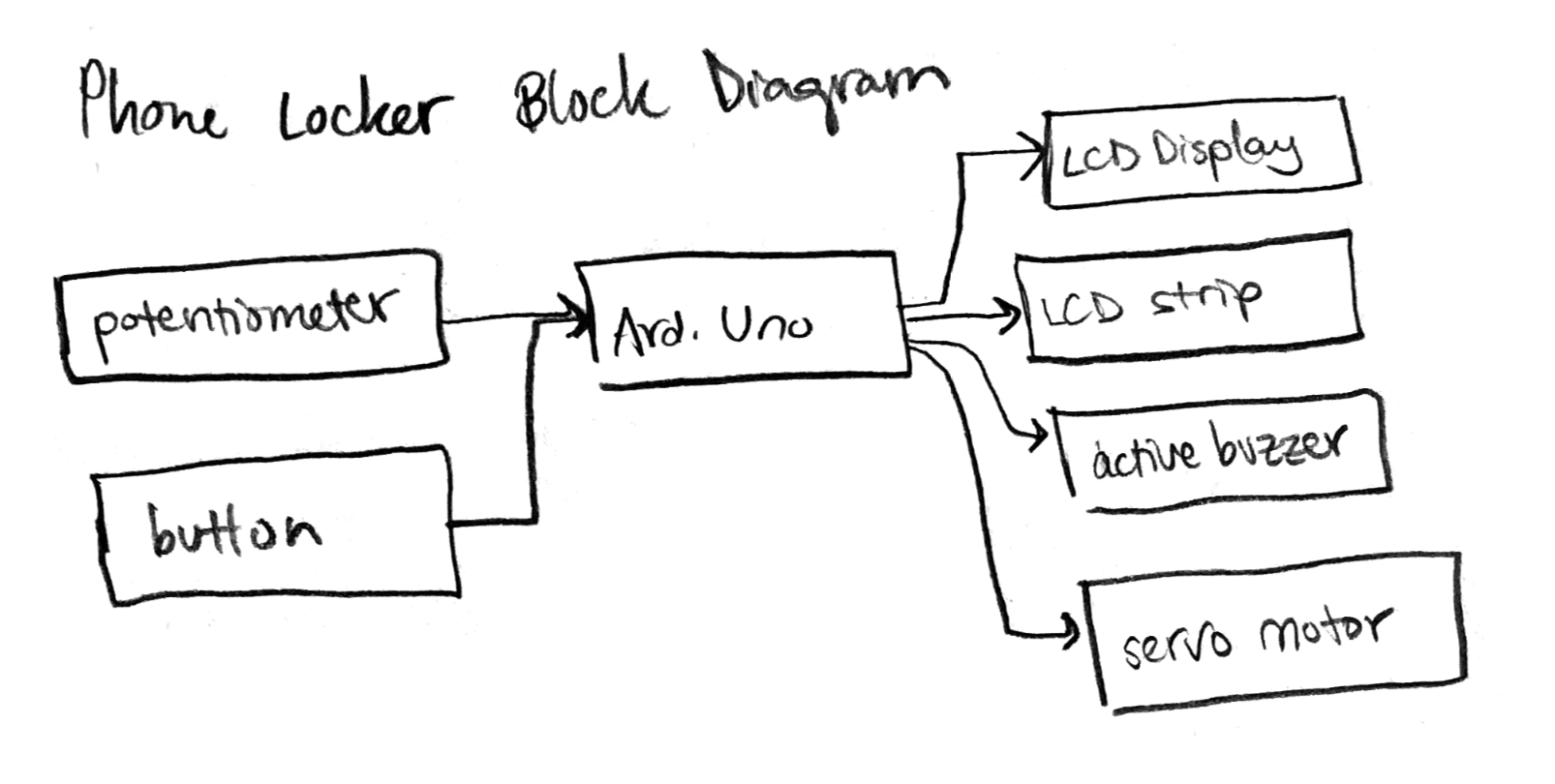