One of the first international group exhibitions of computer art was called Cybernetic Serendipity, which took place at the London Institute of Contemporary art in October 1968. What’s the definition of the word “serendipity“?

In this 1968 recording, Jasia Reichardt (1933—), the curator and organizer of the exhibition, presents the programme.

Too little predictability, and the viewer is confused. Too much, and they are bored. In a generative system, how can we find the right amount?

Randomness, chance, aleatoric form, order vs. disorder. Taken together, these comprise only one of many themes that are explored in computer arts, but it is an important one. You will recall Vera Molnár (1924—), in the interview we watched, discussing how she used the computer as a tool to create “surprise”.

As computers are well-known for only doing what they are told, a significant thread in computer art is the abiding problem of wringing surprise from the computer’s plodding logic, of creating a machine to produce serendipity. Per Molnár: “This may sound paradoxical, but the machine, which is thought to be cold and inhuman, can help to realise what is most subjective, unattainable, and profound in a human being”. 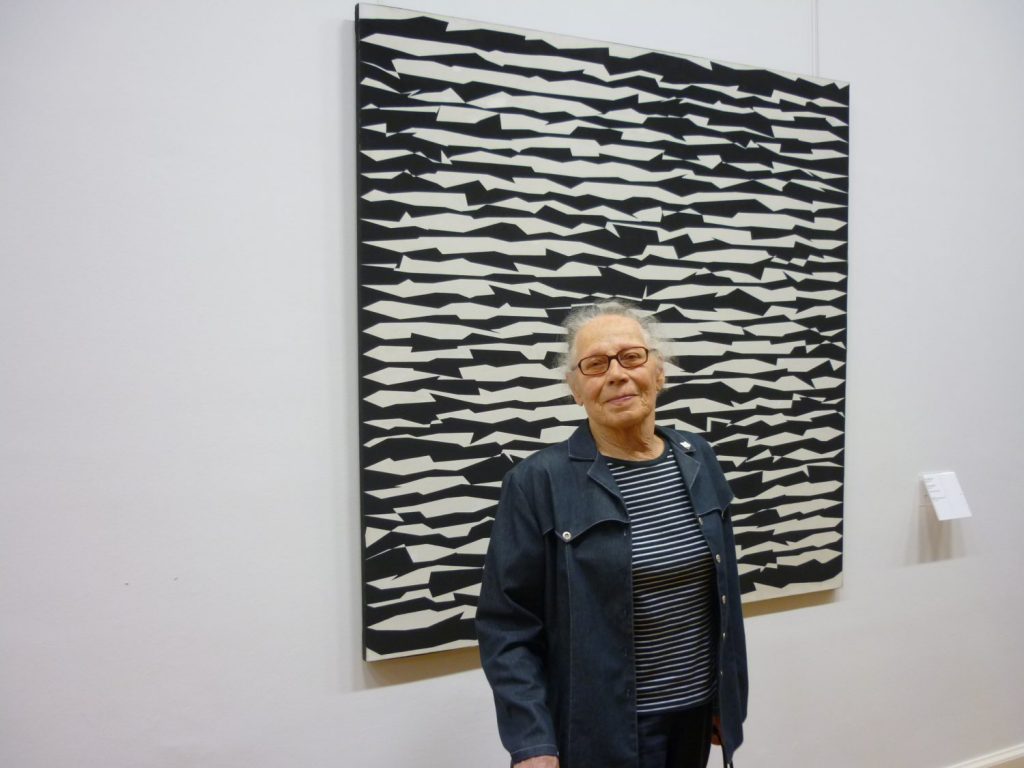 Georg Nees (1926-2016) was a German artist and mathematician, and a contemporary of Molnár’s. Like many of the earliest computer artists, he programmed his works by punched cards, and then plotted them on the ZUSE Graphomat Z64, an early digital plotter. In February 1965 Nees became the first person to publicly exhibit artwork made on a digital computer. His 1968 work, Schotter, shown below, is one of the best-known classics of early computer art. A gradient from order to disorder, it is emblematic of the struggle of the computer artist. 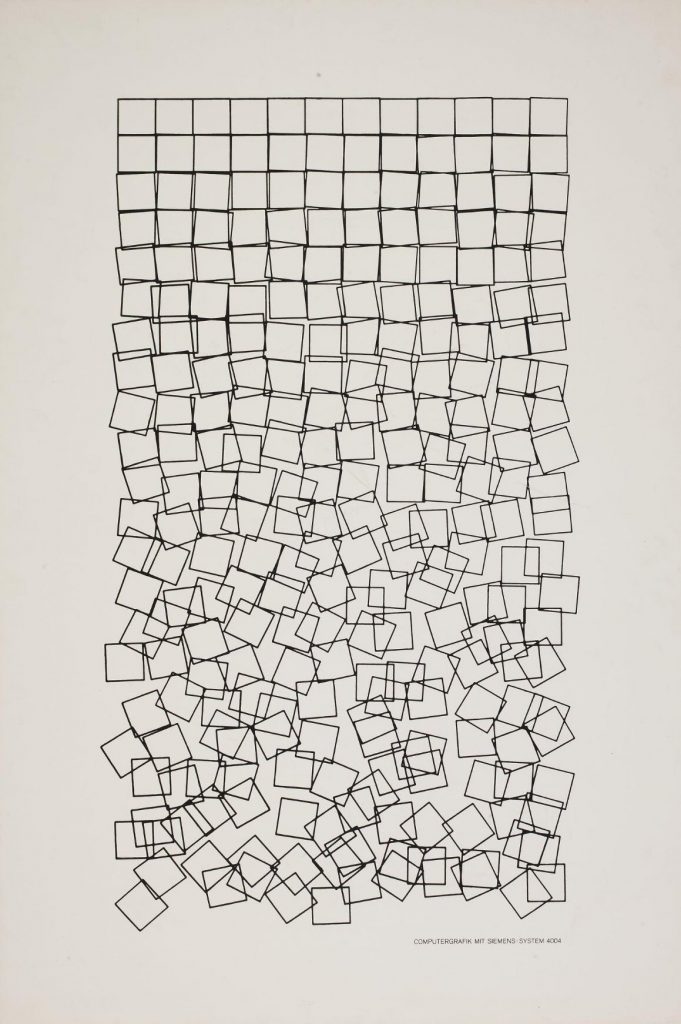 Paul Rickards is an artist and retrocomputing enthusiast active on #PlotterTwitter. In September 2016 he tweeted this small study, “Grid of imperfect circles”. 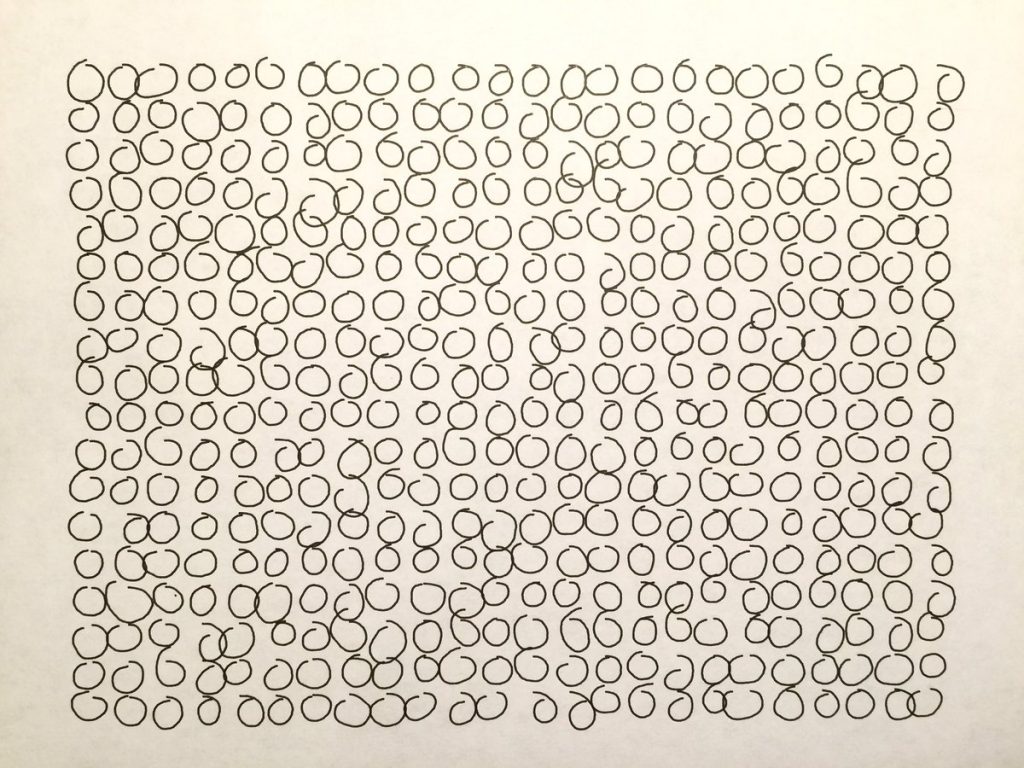 The mononymic Austrian computer artist, Lia, has been active in software art since 1995. In 2018 she experimented with the use of an AxiDraw plotter to produce a series of ink studies. The example below consists of a series of sinewave-like paths, executed by an ink brush. 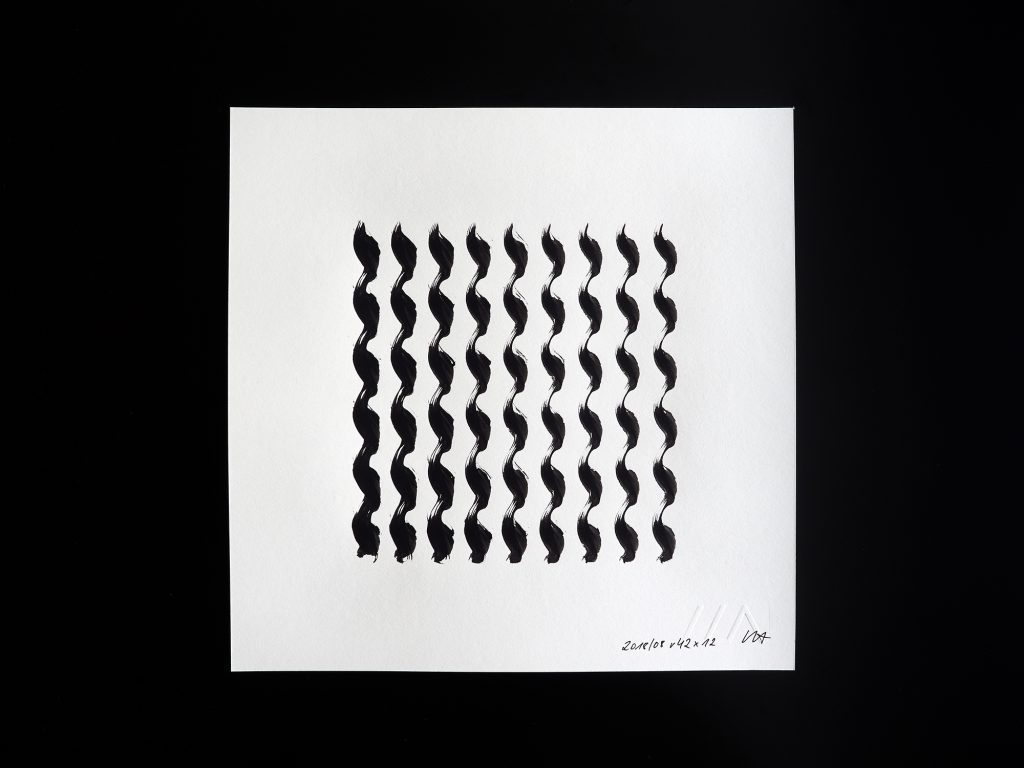 Finally, here’s an example which is not about tension against a grid. The life’s work of artist Harold Cohen (1928-2016) was the development of an AI program called AARON (1973-1990) which Cohen taught to make drawings. “I write programs, programs make drawings. Drawings made completely by the computer. This isn’t the case of computer aided art-making.” 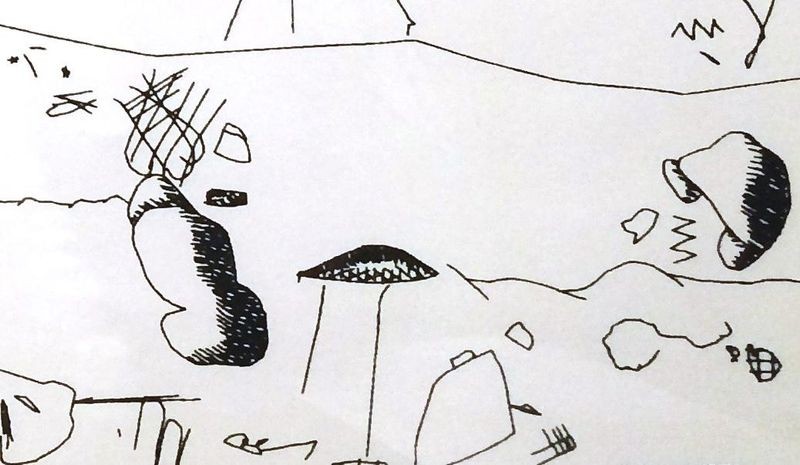 From 1973 onward, AARON could be seen as an art creation “expert system”. Cohen felt that “… perhaps AARON would be better described as an expert’s system than as an expert system: not simply because I have served as both knowledge engineer and as resident expert, but because the program serves as a research tool for the expansion of my own expert knowledge rather than to encapsulate that knowledge for the use of others,” he wrote in 1988. Here is a drawing made by AARON in 1983: 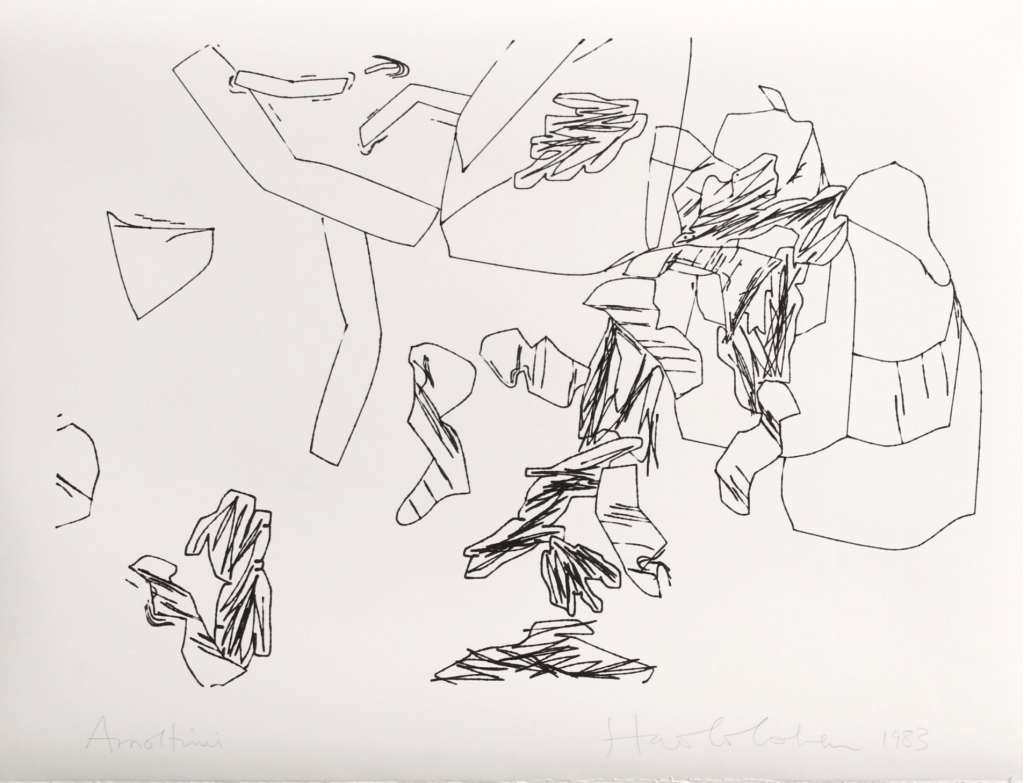 Final thoughts: As new media artist/educator Kate Compton writes in her article “So You Want to Make a Generator“:

So your algorithm may generate 18,446,744,073,709,551,616 planets. They may each be subtly different, but as they player is exploring them rapidly, will they be perceived as different? I like to call this problem the 10,000 Bowls of Oatmeal Problem. I can easily generate 10,000 bowls of plain oatmeal, with each oat being in a different position and different orientation, and mathematically speaking they will all be completely unique. But the user will likely just see a lot of oatmeal. Perceptual uniqueness is the real metric, and it’s darn tough.

In some situations, just perceptual differentiation is enough, and an easier bar to clear. Perceptual differentiation is the feeling that this piece of content is not identical to the last. A user glancing at a line of trees can tell if they are identical, or if they are less-varied-than-expected suggesting unnaturalness. This fulfills an aesthetic need even if no tree is particularly memorable.