Tricky Ball Drop was created in response to the question, what does an interactive children’s’ toy look like in the context of the Children’s Museum of Pittsburgh and what features make it appealing to children of all ages? With this question in mind, the Tricky Ball Drop has many layers of involvement, providing young children with tangible interaction and older children with a mental challenge. This binary relationship between sophisticated and unsophisticated contributes to the success of the piece. Among young children, the interchangeable parts and gears elicit joy and engagement. The use of sensors, a responsive system, and goal-oriented design holds the attention if the older kids. This synthesis is ultimately how the piece achieved its goal of appealing to the many ages of children that visit the museum.

Provide a brief paragraph summarizing the overall goals and results.

The goal of this project was to create an experience wherein museum visitors of all ages would be able to appreciate and enjoy our piece. We combined computation with a durable, tangible wooden design that would allow for interaction among children, young and old. The more sophisticated elements, such as the ball-maze aspect, the responsive motor-driven pieces, and “trickiness” of the piece catered to children aes nine and older. The elements that were purely tangible, such as the interchangeable parts and the ability to spin the gears was more apt for younger children. The goal, which was to create a multi-layered device for all children, succeeded in engaging museum visitors. As expected, the older children found joy and wonder in the maze-like qualities and responsiveness of the device. The younger children, which there were many more of, enjoyed the 3D laser-cut shapes and tactile elements.

Foremost, the objective of this piece was to create and experience that appealed to the visitors of the Children’s Museum of Pittsburgh, specifically children. The age range that we were targeting was 3 to 12. The piece was designed with this range of ages in mind, as children that fall within these ages vary greatly in terms of cognitive and physical ability. For that reason, this piece incorporates elements that appeal to and hold the attention of children of different ages. Physically speaking, the ability to directly interact with the gears and interchangeable parts of this piece appeals to children on the younger end of the range. On the other hand, the use if computation and sensors adds sophistication to the piece that is suitable for the older children. Another objective was to integrate computation, design, and fabrication to create a seamless and engaging experience. Our ability to engender wonder relied on our ability to execute these goals.

State your goals, and discuss what specific features are within scope for the project.

We choose to build our piece entirely out of wood to give it the effect of a hand-made toy. Of course, the hardware and LEDs were not made of wood, but the entire structure was. We had two layers of gears: a bottom, hand-spun layer and a top, motor-driven layer. The intention was to design a piece that had the ability to respond to interaction without it being intrusive. The piece was modeled in Rhino and assembled by hand.

We worked closely with one another to accomplish the outcome of the piece. Annabelle’s knowledge of Rhino was highly valuable and she took on the responsibility of creating CAD drawing. Zachary was more responsible for the hardware and software aspects of the piece. All other contributions, including assembly, testing, documentation, were split more-or-less equally.

Please provide a clear statement of each author’s individual contribution to the outcomes. 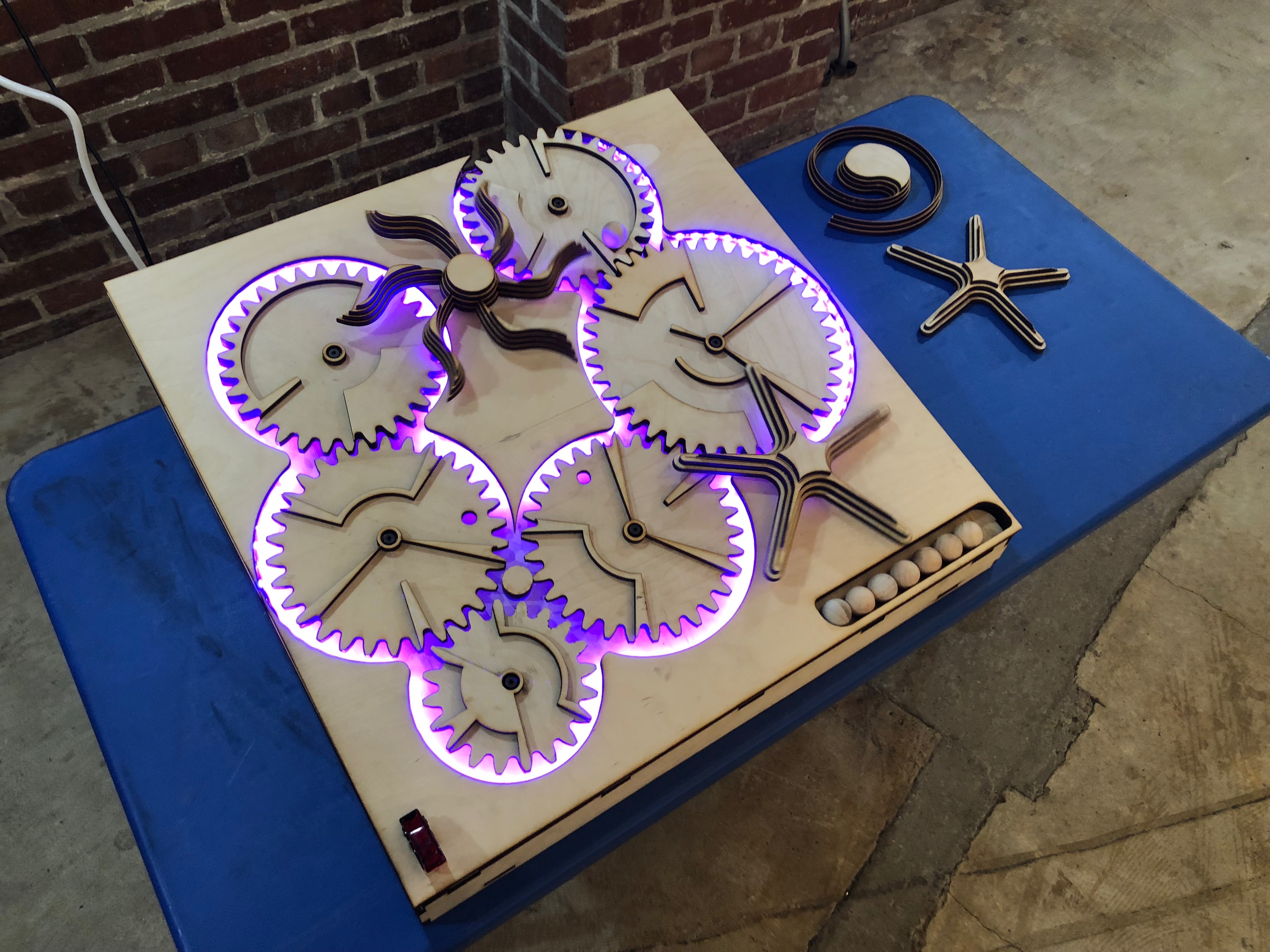 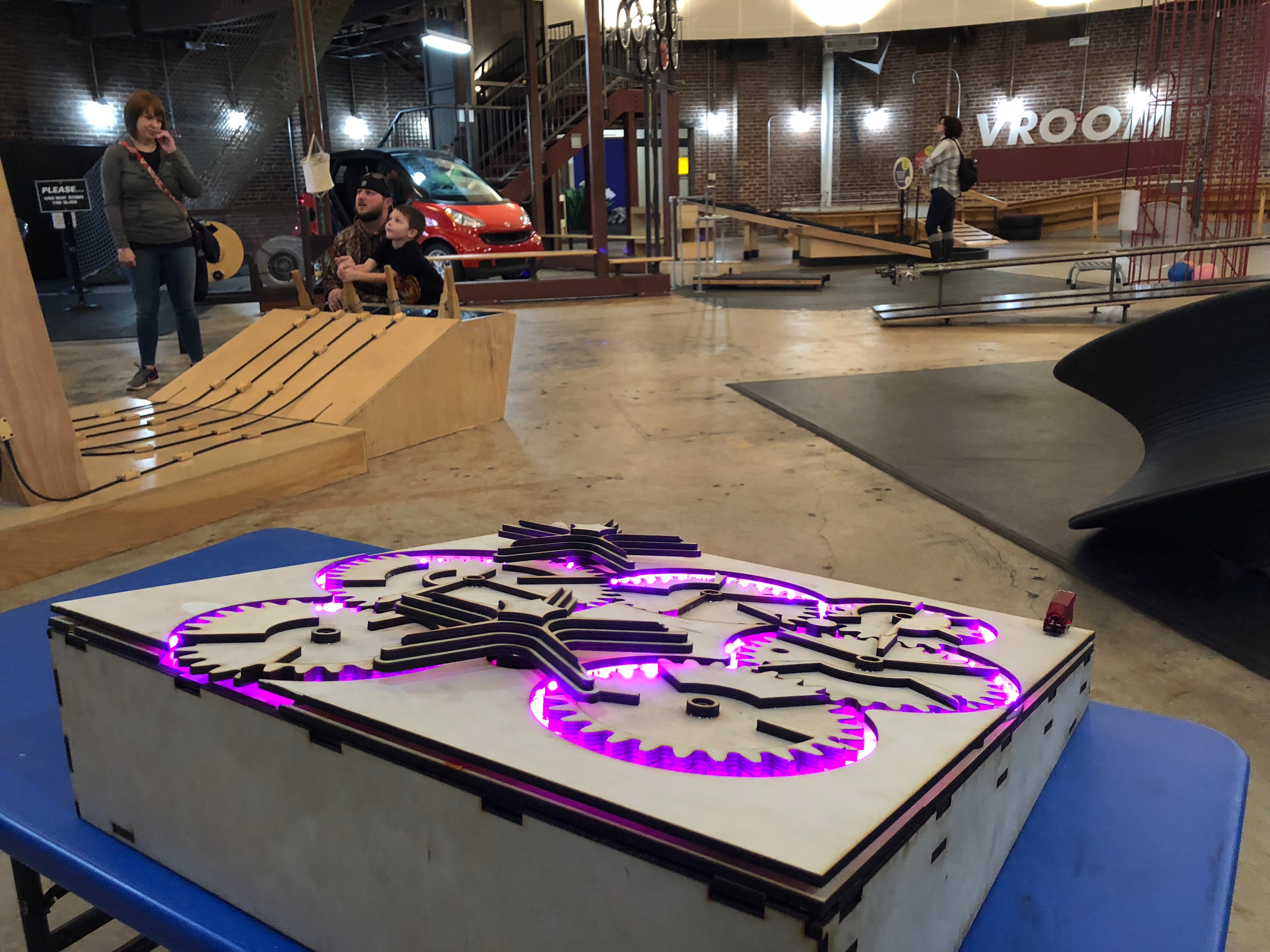 The piece was situated in the Garage of the Children’s Museum. 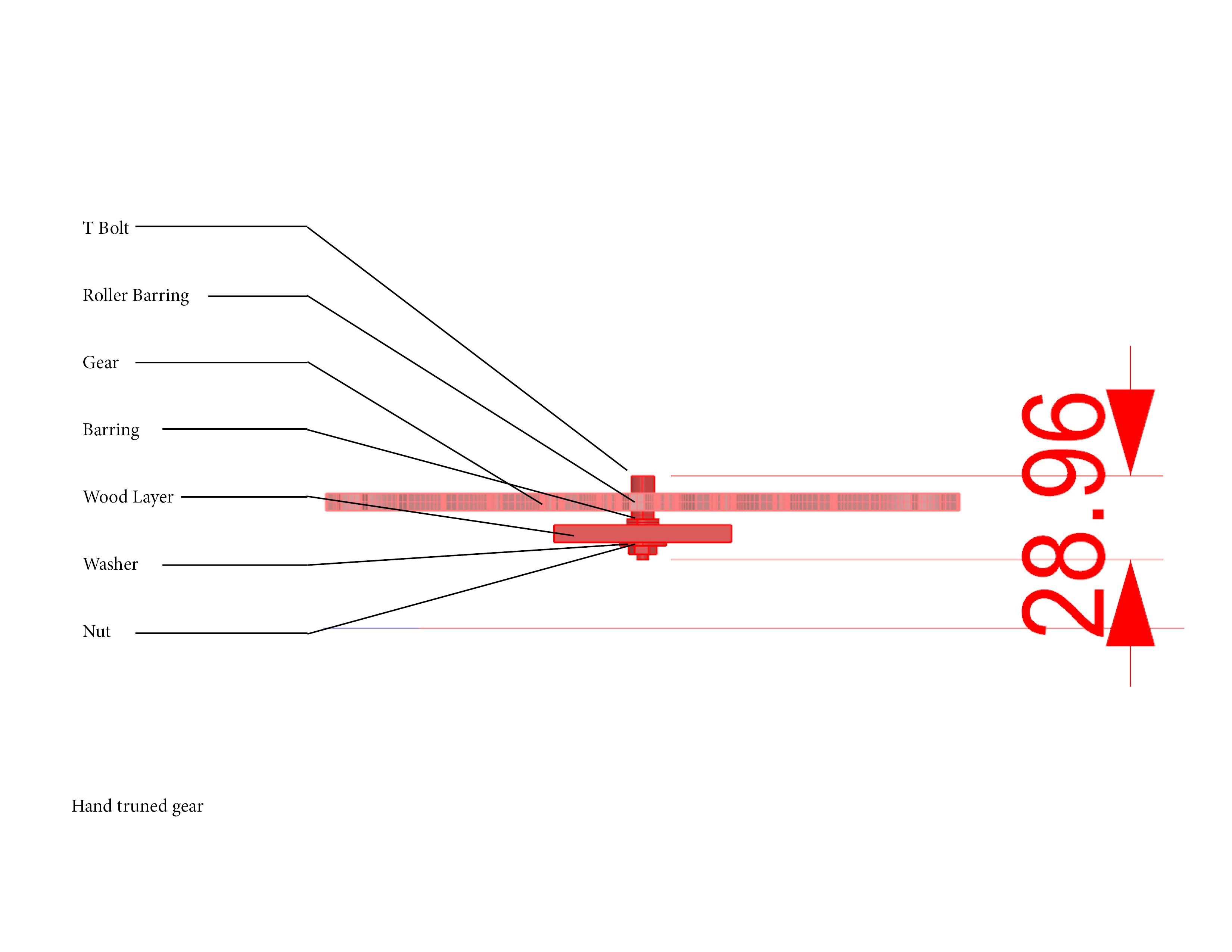 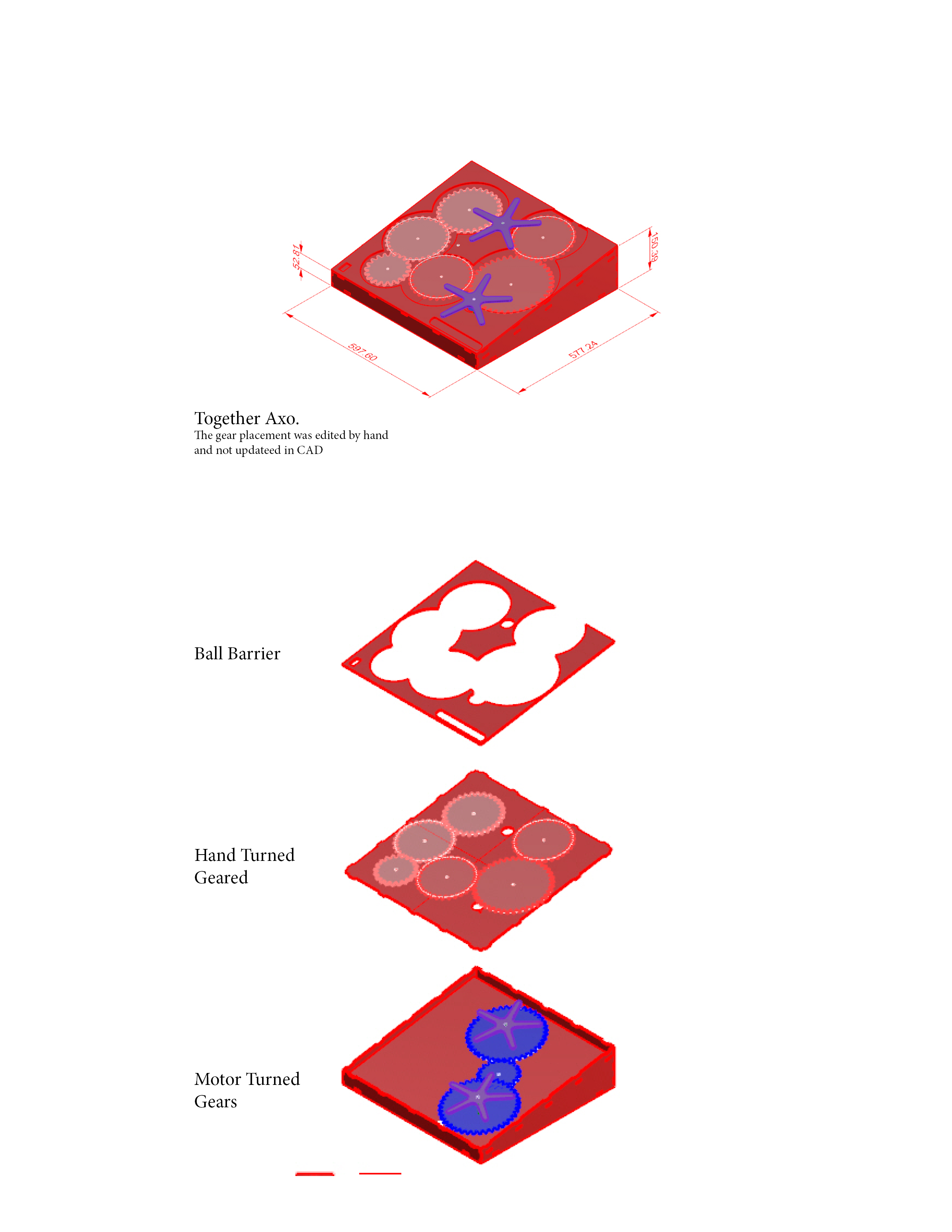 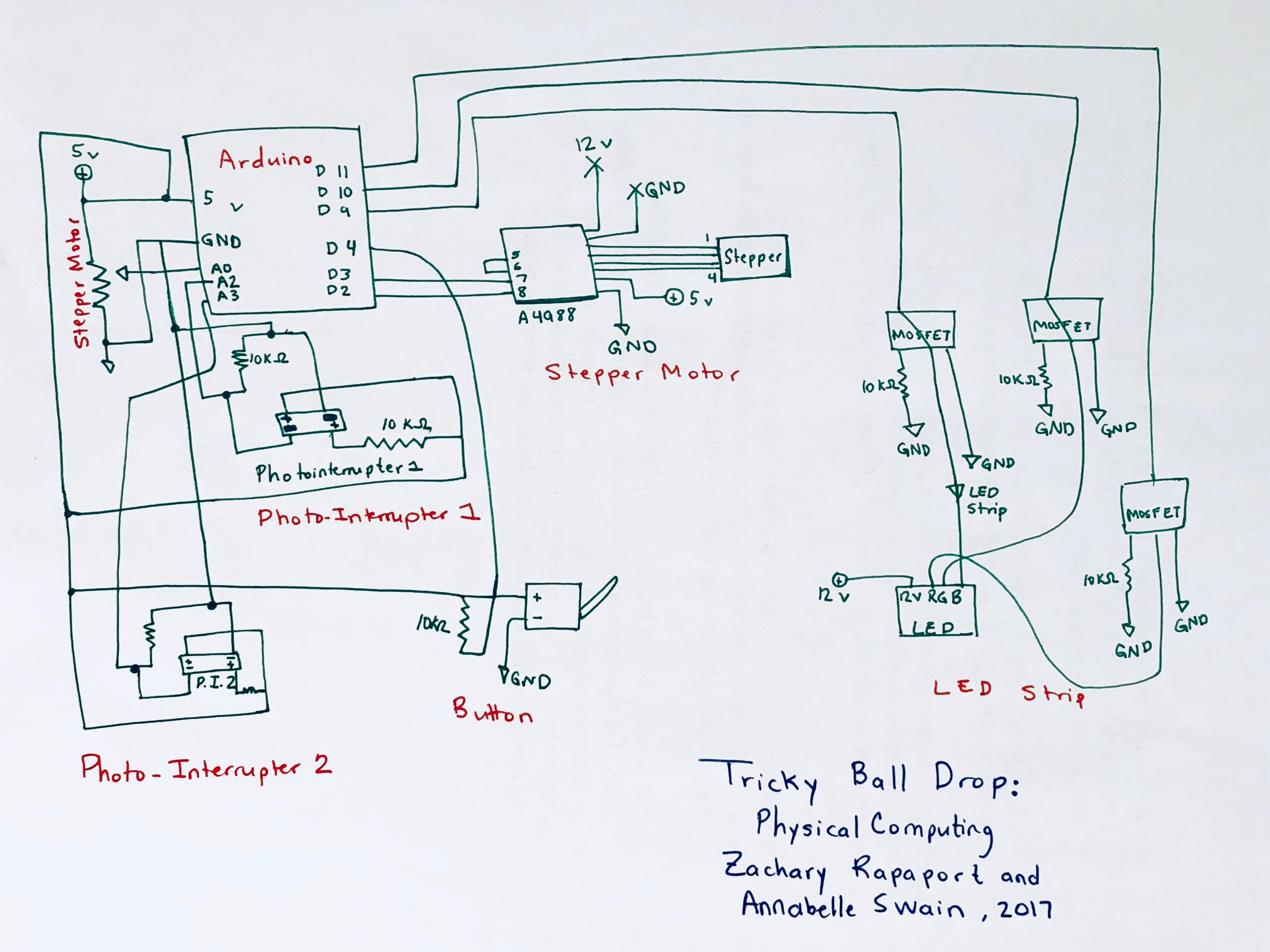