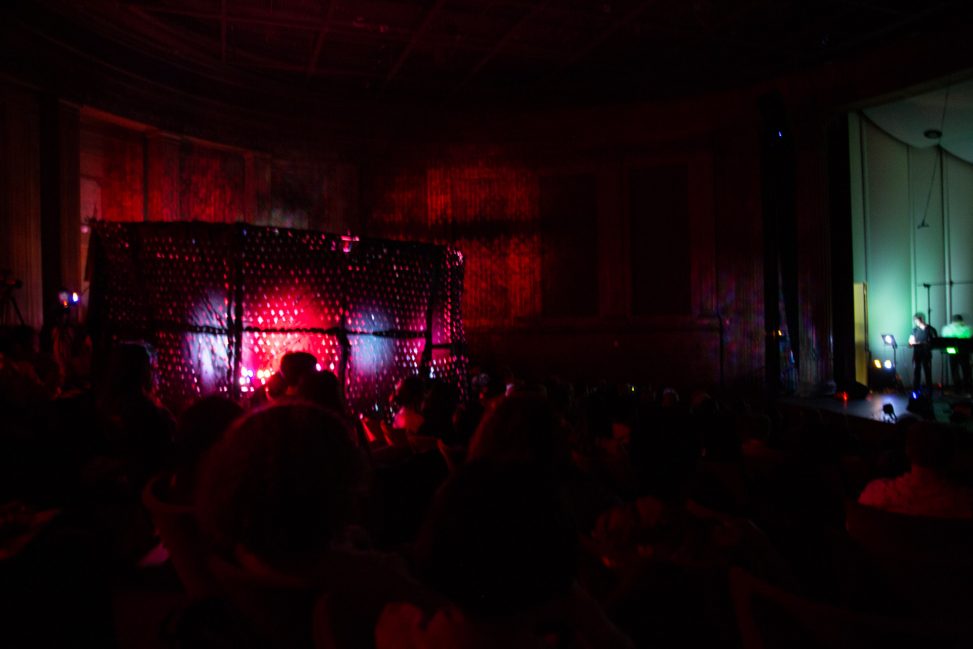 Our project ultimately ended up as a light show. After the audience was placed in total darkness, beams of colored light were projected onto the walls. They were given shape by the cutouts in the fabric. Sometimes the lights appeared all at the same time, so that the room and the audience were almost fully visible. Other times, the lights were turned on one after the other at differing paces.

The lights also performed different gradient effects; some sequences went from yellow to red or red to blue as you looked across the walls.

Originally, we wanted to create a night sky installation above the audience. We imagined that the structure would be similar to a net. This idea caused a number of logistical issues that had to be thought about; how to rig up enough line while retaining tension was the first roadblock. Potentially shirring the fabric was floated as an idea that would cut down on the amount of square feet that needed to be covered.

Ultimately, though, we couldn’t put our project above the audience with the amount of time and resources we had. Instead, we decided to create a large ring structure and have it support the fabric like a canopy. This would allow us to project light from within it onto the walls, creating the starry night effect we wanted through a different means.

We tested out three different types of fabric for our structure, hand-cutting the shapes at first to see how they would turn out . Waterproof black canvas was opaque enough that the shapes we cut into it retained their definition. There was a small amount of scrap Mylar that we thought might cast interesting reflections; however, it crinkled easily and was rather flimsy, and wasn’t that different from the canvas.

We would later decide to order and use black ripstop for our final piece. But for our first few test runs, we used the canvas. We took a large section of the fabric and lasercut different-sized circles into it, to determine which size and spacing of shapes would give the desired effect.

The finalized fabric had astroids cut into it, instead of circles, because they were similar to the traditional star shape and could reinforce our theme.

For the ring structure, we didn’t connect the four main segments with screws but instead used clamps. Doing so made it easier for us to get our project in and out of the space for rehearsals. And if any troubleshooting needed to be done with the ring segments, we didn’t have to disassemble the entire structure to do so.

Which turned out to be quite fortunate the first time we fully assembled the ring; some of the segments weren’t connecting properly and needed to be narrowed, something we might not have realized had we just screwed everything together.

This project demonstrated the challenges of building a site-specific project. Because the heights of our supports were dependent on the height of the steps within the theatre, and we didn’t have access to a detailed floor plan, a lot of time was spent trying to get into the space just to find different measurements. If we’d committed to our final idea earlier, we could have had more work time.

Because so much attention was paid to building the structure, we also didn’t consider movement for a long part of the process. Using the capstan, we were meant to pull on the fabric to make the shapes change size. During the final performance, the code for the capstan kept glitching until it stopped working entirely.

Yet the light show itself turned out well, even though we couldn’t get the fabric to move; the DMX lights cooperated despite the difficulties during rehearsal and setup. The music we were paired with turned out to be a good fit for our project; its creepiness helped to define the mood and atmosphere we had put the audience in.

Through this project, we reinforced prior experiences with coding and soft sculpture. We also gained a wealth of fabrication skills. We learned how to utilize wood, wood glue, and power tools to create the wooden platform for the DMXs to rest on, the ring holding the fabric up, and the supports for the ring. Despite nobody on the team having prior knowledge of woodworking, we were able to figure out how to tackle the problems ahead of us to create solutions that were capable of consistently functioning.