Our project involves creating a hybrid workflow that combines human drawing skill and robotic assembly for peg loom weaving. Through this workflow, artists should be able to draw patterns with specified string densities that a robot will solve for and manually string around a loom. 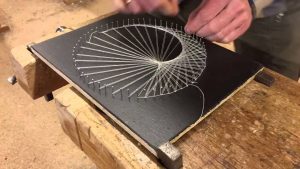 The specific processes involved in our workflow are detailed below and involves using motion capture data to capture drawing that is then processed using Grasshopper to finally RAPID code that will control a robot. 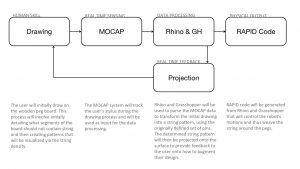 Using Grasshopper, we were able to split up the motion capture curve into distinct points. We then drew tangent lines from each of those points that were then pulled to the closest approximate peg (in our case we had 13 per side). Our final step involved simply printing out the Grasshopper visualization and using the printout to hand wind the string around the pegs.

The artifacts from our shortest path prototype are illustrated below:

In terms of our next steps, the major next problem will be integrating the robot into our current workflow; instead of hand winding as we are right now, we will have to work to creating a system that will enable the robot to wind the string around the pegs. For the robot winding, we will also have do another iteration of our peg board, as we noticed our acrylic frame was not able to withstand the force of the string tension (often without a foam core base, the frame would warp); thus, we will probably create a sturdier wood iteration that will be able to handle the force. Moreover, we would need to do some further Grasshopper processing to identify the most viable path for the string to follow, as that is currently an approximation we are doing automatically as humans observing the grasshopper processing. Finally, we also need to figure out a better way to track the pencil in relation to the frame itself to ensure that our frame of reference for any drawing is correct; while in our tests, the frame of reference seemed to be reasonable, it is possible there was some offset between physical drawing and the virtual model.