Robot’s Cradle was a project focused on creating a hybrid analog and digital design workflow for experimental weaving. Inspired by peg loom weaving or string art, our workflow involved transforming human drawing (tracked using motion capture software) into a weaving pattern using Grasshopper and Python that was then weaved by a robotic arm fitted with our custom string tool. By the end of our project, we were able to achieve the discreet stages of this workflow and start investigating the edges of this workflow, specifically what constitutes better use of the workflow and what is a “finished design” from the workflow.

In order to actualize this workflow, we aimed to 1) reliably capture human drawing using the motion capture system 2) properly process the motion capture data to create a set of tangent line approximations 3) convert the tangent lines into a string path the robot could actually follow 4) have the robot use a custom tool to wind the given pattern onto a peg board. The ultimate objective of this process was to achieve a workflow such that designers could create finished weaving pieces from our system. 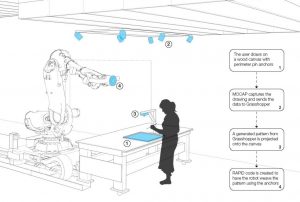 In order to create this workflow, we began with setting up the motion capture system, using a graphite pencil outfitted with motion capture markers that would allow us to track its motion. After setting up some initial bounding conditions, we were able to pretty easily track the line the pencil was drawing, divide up the line into a set of points, and derive tangent lines from each of those points in Grasshopper. 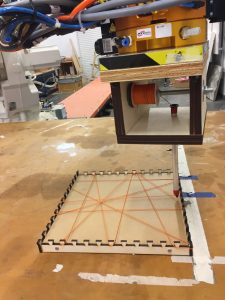 We then transitioned over into working on the physical parts of the project, namely procuring string, creating a base peg board, and creating a robot tool that could hold a thread spool and dispense string. The string we settled on using was wax coated, which made the winding process a bit simpler as the thread itself was sturdier than normal and needed less tensioning for winding. We had to do several iterations of the peg board, experimenting with which peg shape would best encourage string to stay wound as well as what distance between pegs best kept the integrity of the design while not so close as to prevent winding. Finally, our robot tool was the most complex physical part of our system, where we had to iterate how to best keep the tension throughout the system (a problem we solved using a felt washer to tighten the turning of the spool) as well as combat the tension points around the edges of the string dispensing tube. After settling on final designs for the peg board and robot tool, we went back to write the Python code needed to turn our tangent lines into an actual robot string path that we then converted into HAL code for winding. After getting the robot to successfully wind, we iterated back and worked on making our entire system more connected into an actual workflow. The main change we made in this process was that our initial design involved using projection for user feedback that we replaced with a separate screen instead. 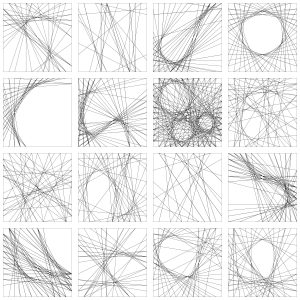 We were successful in creating a complete workflow for experimental weaving, which meant we were able to explore what a “finished” design might look like from our system. Thus, we had several users come in and test our system to see how they interacted with our system and what some of the better results might look like. We found that the “finished” designs often had areas of clear density through the system, such that the initial drawing was clearly visualized in the string, and users would often redo their initial drawing when the string pattern produced was too abstract and not as clearly visualized in string density. The best example of a finished piece from the workflow is visualized below, where several layers (each with distinct, clearly identifiable patterns) are layered upon each other to create a final piece. 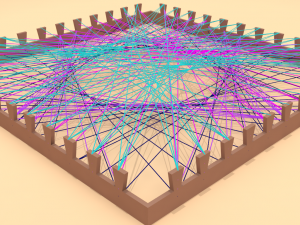 Stephanie primarily worked on the Rhino and Grasshopper portion of the code, as well as generating the final HAL code for winding. Sarika focused on the Python string winding algorithm and the point generation for maneuvering around each peg. Both Stephanie and Sarika created iterations of the peg board as well as the robot tool that held the thread spool and dispensed thread.

The two of us would like to thank Professor Josh Bard and Professor Garth Zeglin for their mentoring and advice throughout this project. We would also like to thank Manuel Rodriguez for their assistance in debugging some of our Python and Grasshopper integration issues and Jett Vaultz for allowing us to borrow their graphite pencil.