Last semester I recorded myself reading the first page of my favorite book ‘The Hobbit’ by J.R.R. Tolkien. I recorded myself a few times so that I was able to change my inflection. I thought that it would be interesting to recreate the the song ‘Concerning Hobbits’ by Howard Shore using only generative processing of my voice. After a few hours of work, I realized this was a much larger task than what I anticipated and the outcome was very abstracted from the original music. I was still very excited with the amount of experience I gained in experimenting in both LogicX and Protools. After the first 30 seconds of the song were abstracted I overlaid my voice recording and added in the underlay of the original song to be compared. It was interesting how abstracted everything became and I hope to edit this project much further in order to create the entire song.

Using Max I created my own convolution simulator. I played around with a simulator from an outside source that was shown to me last semester. I then used old Impulse response recordings from around campus to change the location on will. I also downloaded some other IR recordings from free sound sites.

I also added a visual component to the Patch because I wanted to know the waveform of the Ir was doing, and what the sound looked like after going through the IR.

I also tried to get a variety of sounds to play through each space, from drums, drones, and low frequencies, to horns, speech,kalimba, songs, and ambient noise. I also added a ADC to the patch so people can set up a microphone and create their own noise and hear was it would sound like if they were standing in a different room.

Heres and example of the changing sounds you could play with:

The patch was set up to be user friendly, so that an audience member use and listen to the patch with little to no assistance. 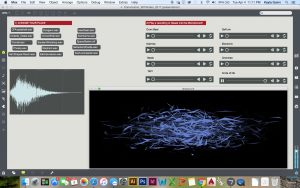 The Patch code can be found here:

Overview:
A live audience participation based rhythmic composition which evolves in real-time via filtering and effects done in Ableton Live. 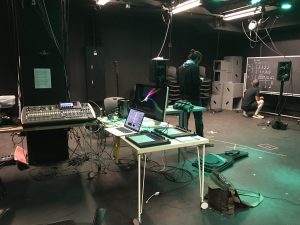 As we were conceiving our idea for the project we knew two things. We wanted to involved people to allow them the chance to familiarize themselves with our project on a deeper level and we also wanted to incorporate different rhythms. For our project we had four different rhythms that can all be combined to sound symmetrical with each other. The rhythms increased in difficulty from number one to number four. We chose to do this because the knowledge and performance ability for rhythm is very diverse between people. Some are very good at reading and performing difficult rhythms but also some are not the most adept at it. We knew that adding these different rhythms would challenge the participants and further enhance their engagement through the performance. 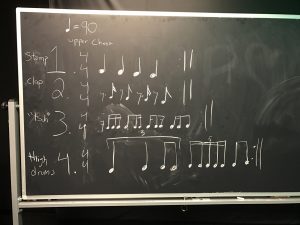 Our main objective for the piece was to get people to have fun. We accepted the risk of human error and imperfection before hand and wanted to focus on how to get people involved as much as possible. After organizing people into four groups we recorded everyone through Ableton live. We then edited the recording and sent it to specific speakers around the room.

Inception:
As we were conceiving the idea for our project we knew two things. We firstly wanted to involve people and allow them the chance to familiarize themselves with our project on a deeper level and secondly we wanted to incorporate different rhythms. For our project we had four different rhythms that can all be combined to sound symmetrical with each other. The rhythms increased in difficulty from number one to number four. We chose to do this because the knowledge and performance ability for rhythm is very diverse between people. Some are very good at reading and performing difficult rhythms but also some are not the most adept at it. We knew that adding these different rhythms would challenge the participants and further enhance their engagement through the performance.

Setup:
The DAW of choice for this project was Ableton live.
The microphone as routed from input #10 of the UTRACK32.
Pre-amp on and gain sufficiently turned up. 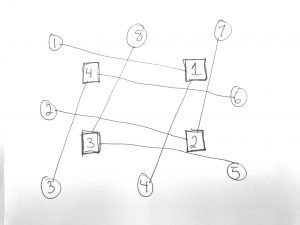 Technical Details:
The goal was to record the group after a 4 beat click and continuously build the rhythmic layers as we progressed through the groups. As this was happens live effects such as ping-pong delay, reverb, and various equalizations were applied to the recorded clips. 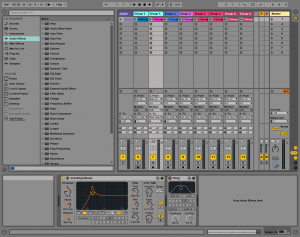 Bottoming out the piece was to be a guitar improvisation.

The original recording can be listened to here:
https://soundcloud.com/user-233892197/ess-project2

During our actual performance we ran into issues with the equipment. The main problem was the sound console settings. Gains were too low, it was set to ‘surround’ instead of ‘ambisonic’ and certain inputs were in the wrong spot. We were able to set and test all other equipment, but because every group used the console differently we were forced to set it during the performance. This lead to delays in the performance and a lot of waiting around time. We didn’t realize how much we relied on the console for our performance, and now realize for next time we should save our settings to a thumb drive. Our performance can be found here: 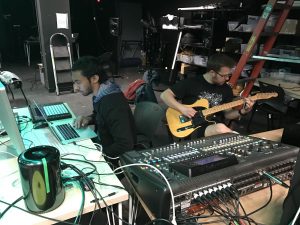 A zip file of the project and the recordings can be accessed here:
[hyperlink zip file download] 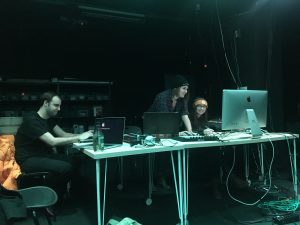 For the field recordings assignment, our group chose to first focus in on the little sounds of everyday life. We recorded small moments which might ordinarily fade into the background, but when focused in on, revealed satisfying textural experiences. Some of these were the babbling of the stream in a park, the snap of a camera, the squeak of a hand on a rail, and the droning hums of a refrigerator and stove top. Though our chosen sounds all came from very different environments, we sought to combine them into a single immersive space, leveraging the possibilities of the 8.1 system to create a soundscape that was both familiar and yet surprising. An important aspect of our approach was in changing the “scale” of the sounds as we heard them. We quickly realized that the ambisonics system would allow us to make these tiny sounds feel absolutely enormous— this would place these familiar sounds into a sonically unfamiliar space, and even make the listener feel improbably small.

We used to HOA library to create an ambisonic experience in an 8.1 speaker system. Using 8 sounds:

We split them into two groups and ambi-sonically spun one group clockwise and one group counter-clockwise. We played the Fridge hum on all 8 speakers equally because it was such a low frequency that you were unable to pick up where it was coming from. The Video shows the way both groups rotated and changed throughout the course of the piece. video link:

The installation had a small amount of live-performance added to it. We kept the gain of each sound effect ‘Gooey’ and open to change as the piece went on based on reactions to the audience and the relative environment. The piece started by slowly increasing the gain for one sound effect, and then slowly adding more over time. The end of the piece was the slow manual fade of each sound. We did this because we wanted each experience of the installation to be unique and different.

We chose to present the piece with all of the lights (or as many as the room would allow for) turned off. This helped to further disengage the listeners from the Media Lab environment, removing nearly all visual input and thus heightening the sonic experience. Its interesting to note that the first cue of the sound piece was a lighting effect instead of an aural effect. 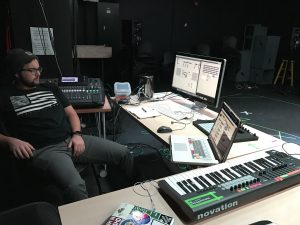 We uploaded our code so that anyone is able to use and open our max-patch. Max Code Link: 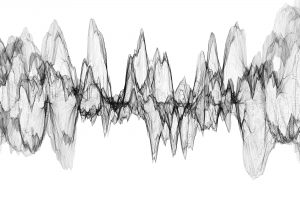 Sound is complex, complicated, and convoluted. (And those are just the “C’s”). It’s pressure waves that travel through the air as vibrations, when they reach your ear it causes your ear drum to move, ‘knocking’ a small chain of bones together in order to make liquid in your inner ear (cochlea) move up and down. Your brain takes this tiny bit of moving liquid and interprets it as sound. THAT IS INSANE. No really, just think about how completely insane that is. When I first starting my interest in acoustics I constantly looking for little short cuts or rules about sound that are always a constant. But sound isn’t so simple. It is because the concept of sound is so extraordinary, that I am still interested in it.

In the beginning of Golan Levin’s lecture, he said that he hasn’t worked in the aural realm in over 9 years. Which is extremely surprising after hearing him speak. That class was an hour and a half of fast-paced exciting theory, experiments, toys, scientific research, and sound concepts. We jumped from youtube video to youtube video. There was barely enough time for questions in between his excitement to share other installations and experiments. and the best part, 80% of what he showed us I have seen before. But instead of getting bored or tired, my passion for sound grew as i remembered all of the different ways you could express sound.

Like I said in the beginning, sound is a complicated thing. And I think it takes a repetition of explaining from multiple points of view before you are truly able to grasp everything that sound is. As an architect I come from a different background and viewpoint than most people in the field. I can’t read music or think of sound in terms of tempo and pitch, I’m not an engineer who can calculate decibels or reverberation time, I am not a coder/Computer scientist who thinks in terms of scripts and numbers or a sound designer who programs with speakers, mixers, wires and hardware. But I have taken classes in each of these departments, and its only when the same idea begins to overlap that I truly understand how complex sound goes. Golan spoke to me from the point of view of an artist and a designer, and re-watching and re-thinking about old concepts brought me a greater understanding of sound.