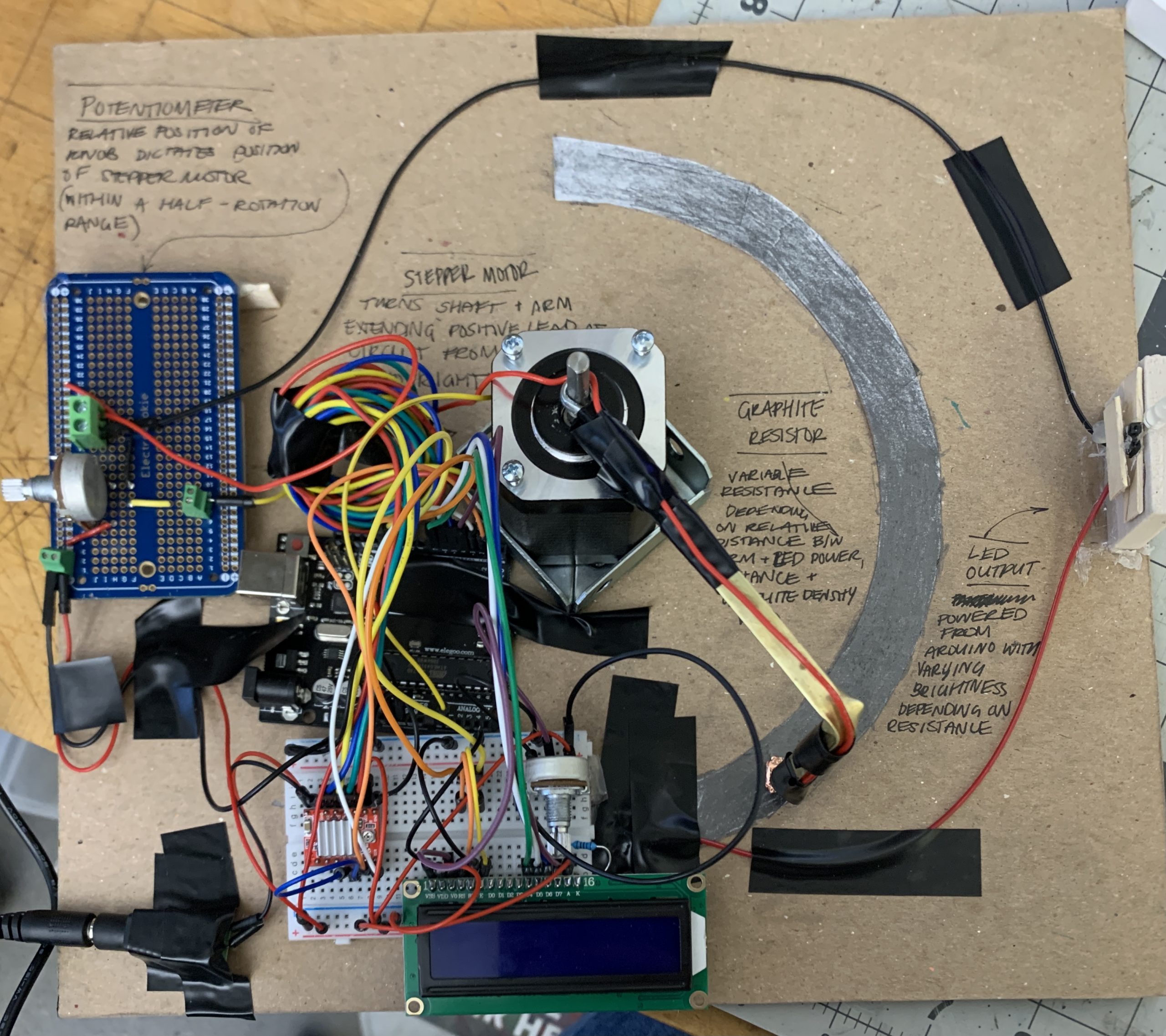 To begin this assignment,  we discussed various ideas of how we could transduce orientation to light.  After a couple hours of excited general brainstorming, we found it very helpful to use then maker cards to narrow down our conversation in terms of input and output.  This focus allowed us to see what was necessary in the middle steps of the operation , and what parts may lend themselves well to working together. 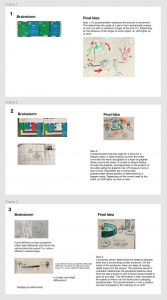 An overview of our 3 more refined ideas

Our favorite of the 0ur 3 more refined ideas  was the following:

A potentiometer sets the angle for a servo for a stepper motor. A cable sticking out from the motor turns with the motor and glides on a layer of graphite drawn around the motor. A current is always flowing through the graphite, and depending on the position of the cable along the graphite trail, it’ll measure more or less current. Essentially like a homemade potentiometer whose position is determined by a stepper motor. Depending on the current read by the cable, an LED lights up more or less. 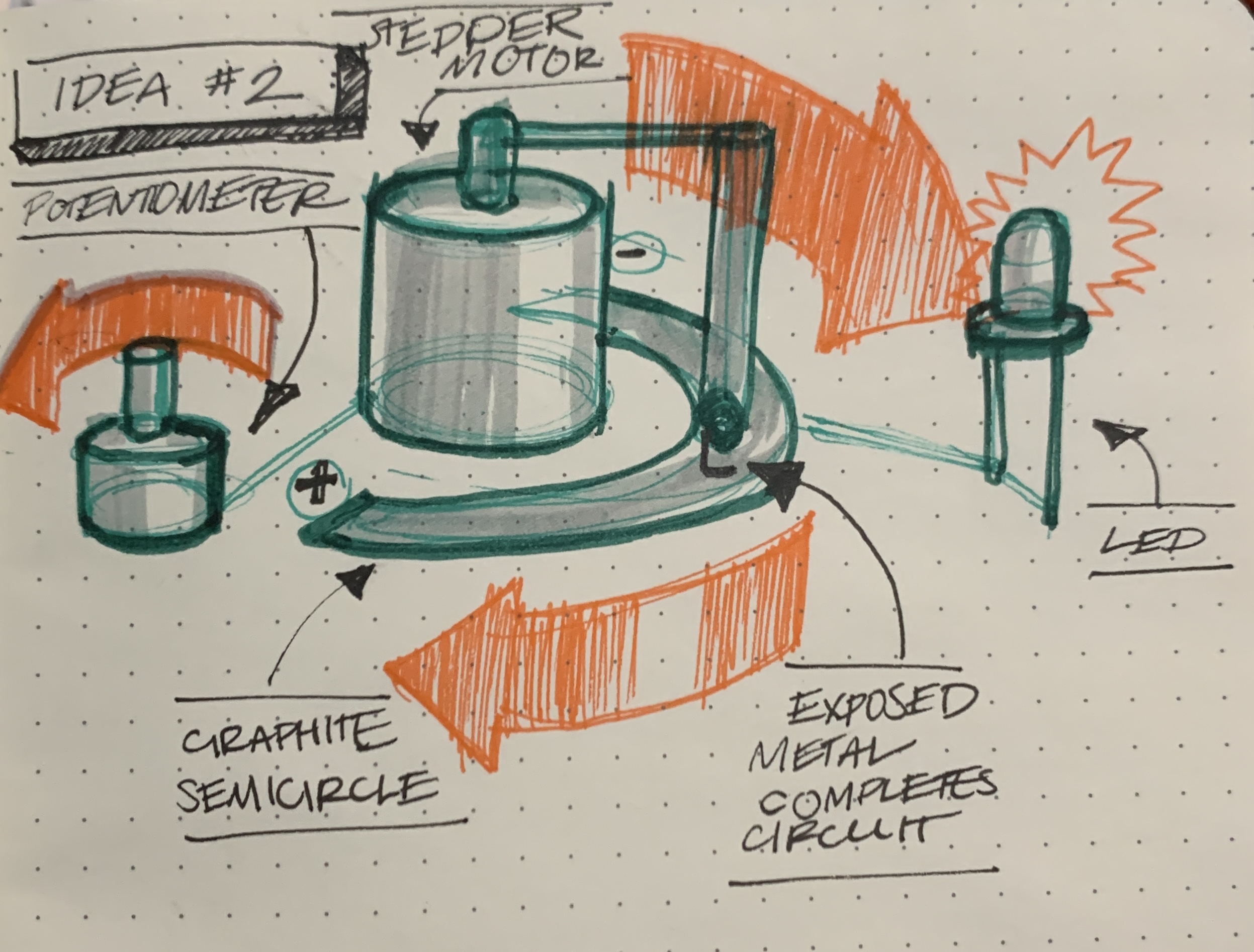 Jubbies’ concept sketch for our idea

We had gotten some good feedback from  our professor as well, since this idea seemed to be a good balance between exciting and feasible.  To proceed forward,  we broke down our problem into several steps so we could focus on individual components before be assembled them together .  The first step we needed to confirm was working  independently was the one that was most unfamiliar – using a graphite resistor.  To learn how to do this,  Jubbies used YouTube  to find a concise demonstration of this idea.

The following video was very helpful  as it demonstrated  some of the affordances of using graphite circuit .

Using this video as guidance,  Jubbies recreated this graphite circuit with alligator clips in a 9-volt battery.  This demonstration proved successful, although there was not as much variance in the light as was desired. We found that this issue was resolved as we eventually used a longer graphite resistor.

Demonstration of the graphite circuit

After proving that the graphite circuit could work,  the next issue to tackle was  controlling the stepper motor accurately with a potentiometer. This pursuit proved to be far more difficult than we first predicted. A huge barrier that we had to figure out how to overcome  Rose  making the  stepper motor turn the correct direction. For some reason the stepper motor seems to only cumulatively turn to the right no matter the direction that the potentiometer was turned.   it was as if the stepper motor turn only two  the amount  that was equivalent to the total value that the potentiometer was turned , regardless of whether that value was left or right.  We tried editing the code and  checking our wiring for hours,  but none of this seemed to help.

It wasn’t until receiving help directly from our professor that we were able to proceed forward.  The thing that fixed this issue  was in the end, simply replacing both the stepper motor and a stepper motor driver.  We have not yet identified what the issue was particularly, but using  the new parts with the same code achieve the results that we had wanted.

While this issue was frustrating and strange,  it did allow us to use a stepper motor that was far more robust than the one we were using before.  This helped  with the construction  of our circuit  since we did not have to worry that the arm would not move quick enough.  however  oh, I believe the use of outside power source led to  the following image – Jubbies accidentally blew up an LED while accidentally connecting the power and ground of the LED without the graphite circuit in-between. This was a good lesson, as it reminded her to be very conscientous of these wires not connecting again. 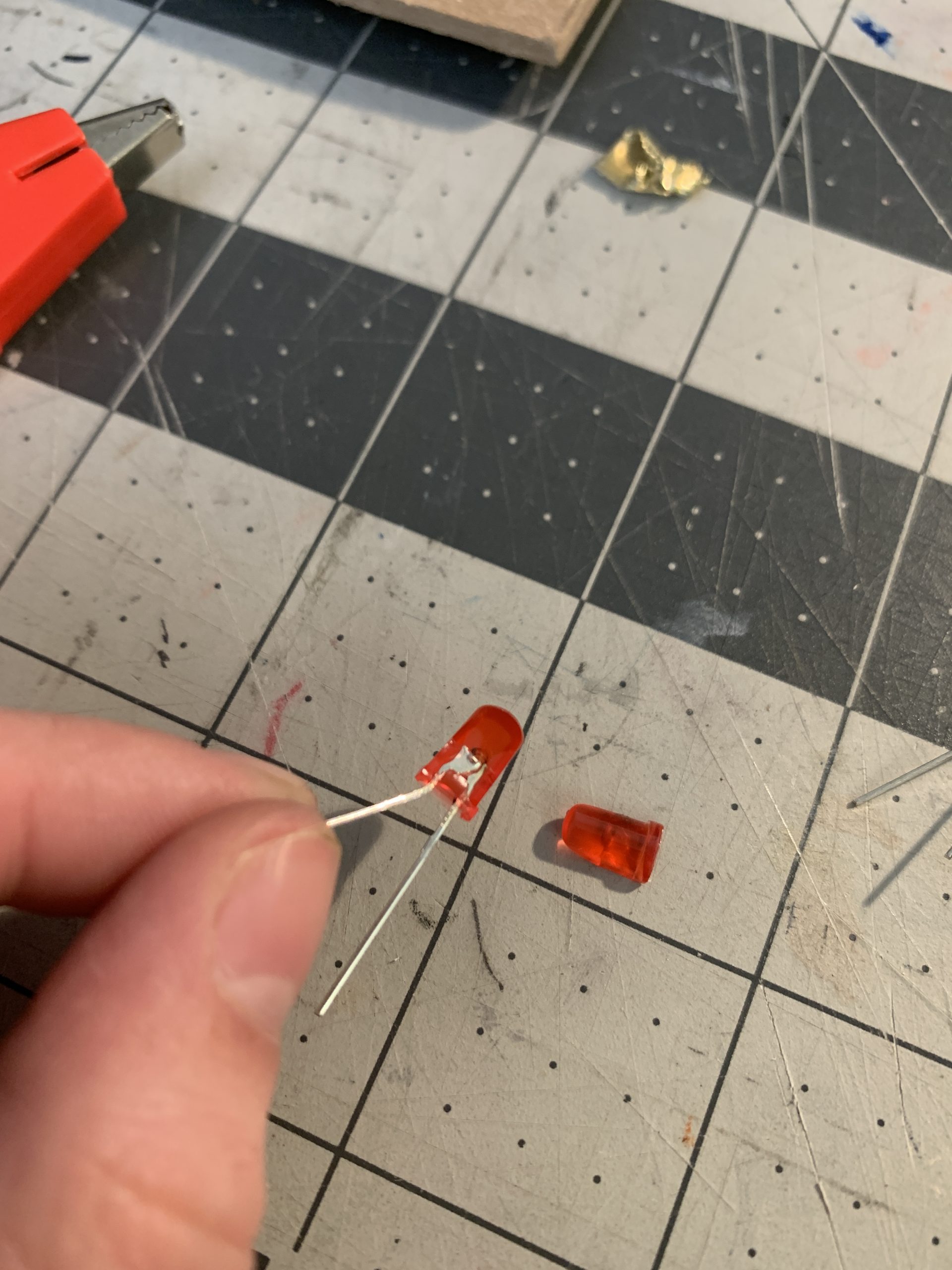 Another strange issue that was not ideal but did not hinder the intended mechanism was an ever present jitter in the stepper motor arm. This jitter was likely due to analog interference and could be resolved in the future with a threshold or other tool to smooth the data recieved by the potentiomenter. I had considered using a rotary encoder mid-project over the potentiometer as I heard that it was less susceptible to analog interference, but I was unable to quickly implement this and ended up just using the potentiometer.

Bonus: I strapped a pen onto the stepper motor arm and found this jitter made for an interesting drawing tool to be explored further in the future – Jubbies

My (Carlos’s) Tinkercad code somehow became ridden with invisible special characters \302 and \240, maybe after copying and pasting the code from iMessage. They were nearly impossible to remove without retyping those lines word for word all over again. Because of this, the code wouldn’t compile, and I couldn’t check if the rest of the code was correct.

Tinkercad does not have a stepper motor, so I used the larger, grey DC Motor with Encoder as a mere placeholder, not even connected to anything. 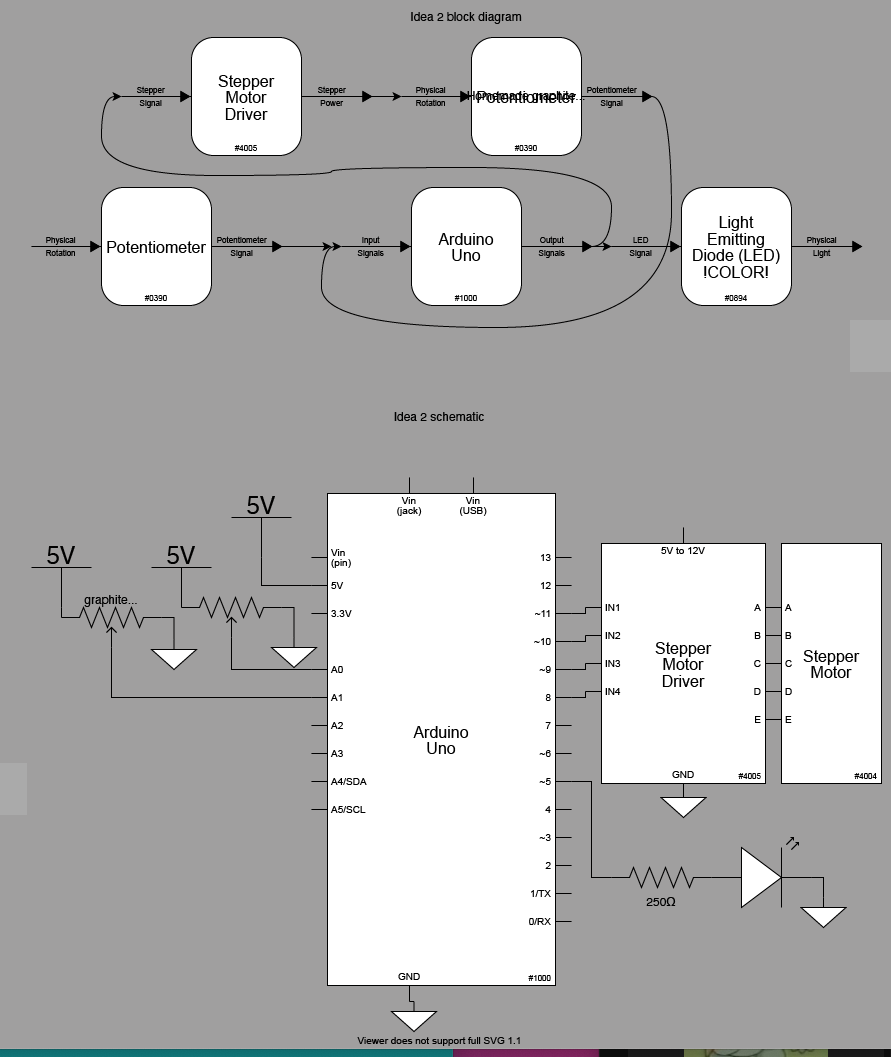 This project was an exciting introduction to many new concepts  such as assembling separate components into one  operation, using  graphite as a resistor,   learning how to debug in context,  soldering,  and collaborating remotely.  Since we were both excited about this idea, it was easier to push through these bugs.   Learning hands-on was a great experience , since somebody can tell you what it’s like to explode an LED, but before you actually do it,  I would argue that it is far less likely to sticks with you.

The biggest barriers we faced had to do with  significant bugs and remote collaboration.  The stepper motor/ stepper motor driver bug , although  circumnavigated, was never resolved. Only with the help of our professors are we able to  move on from that point through replacing our parts.

Additionally, since Carlos is studying remotely and never received his Arduino kit  from customs,  there was simply not an option to collaborate on the hardware issues.  Since the software and hardware are delicately intertwined, this also made it extremely difficult to collaboratively resolve software issues as well.  While on paper, tinkercad seems to be a good option  to ease this situation,  the lack of a stepper motor, stepper motor driver, and  graphite resistor on the platform, as well as the inability to import libraries, made this tool unhelpful.

That being said, we were able to have rewarding discussions about  conceptual development and enjoyed the process of translating our idea to a real tangible thing.