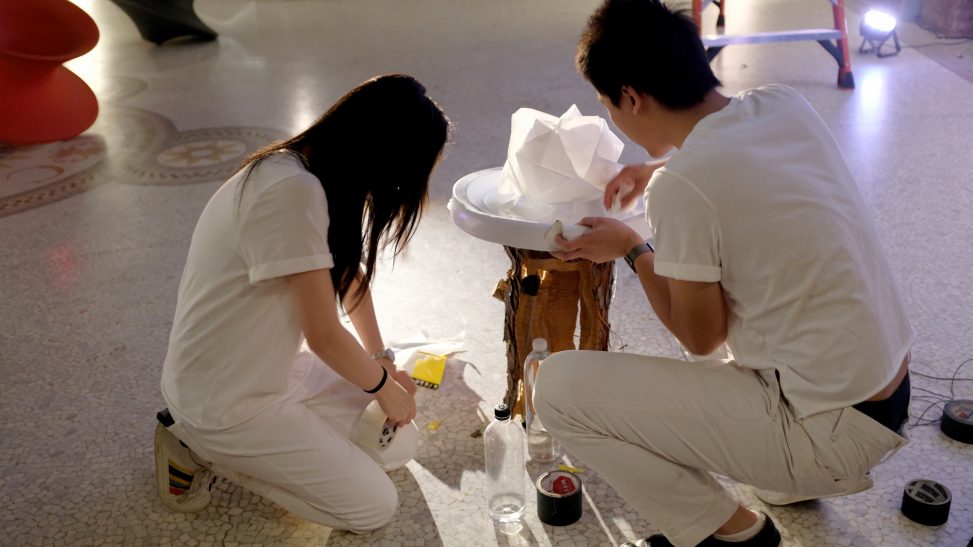 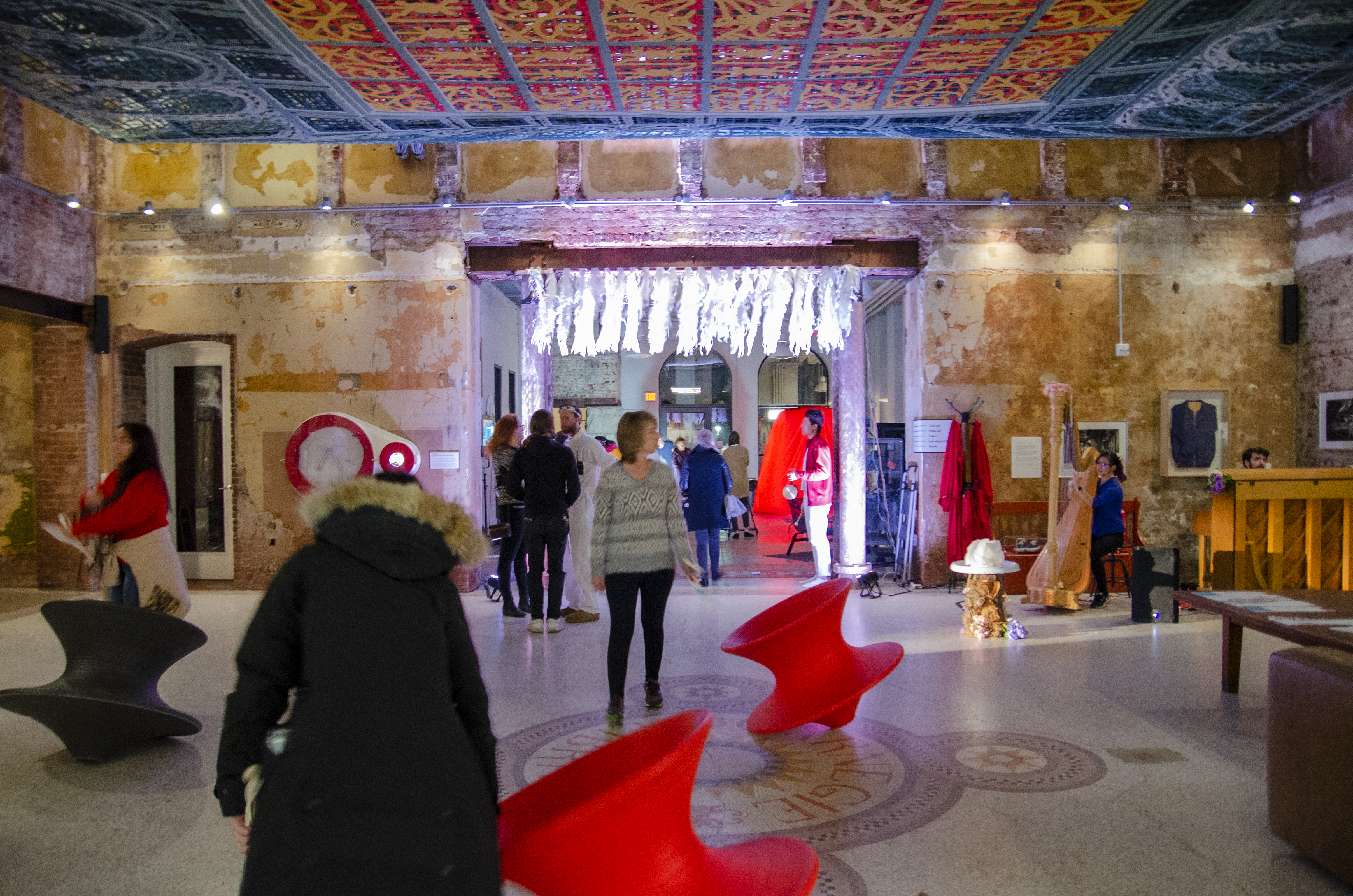 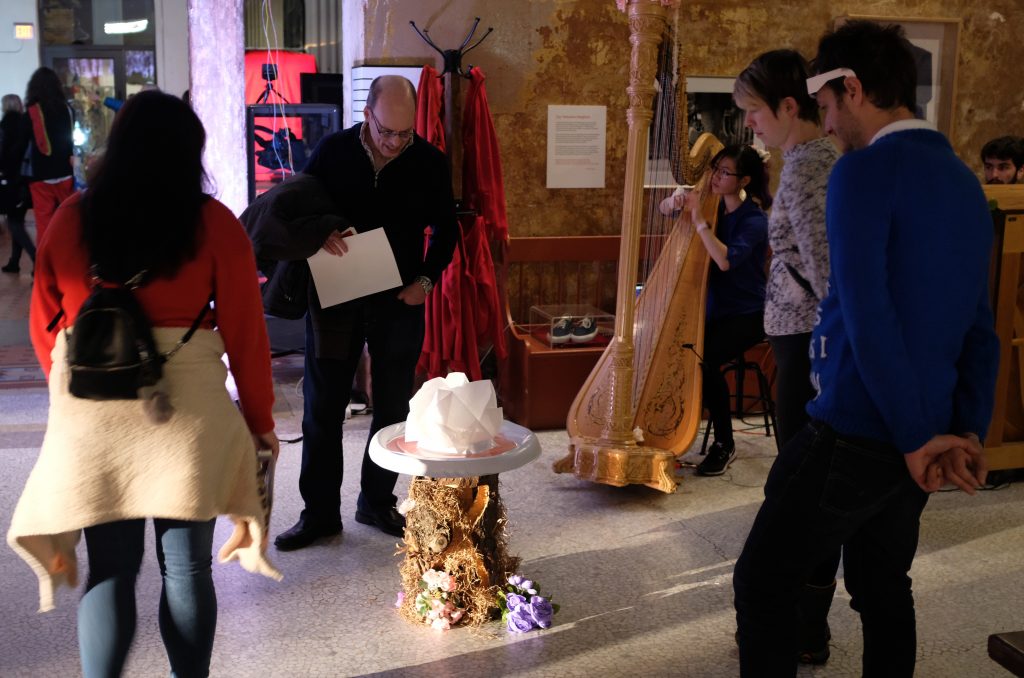 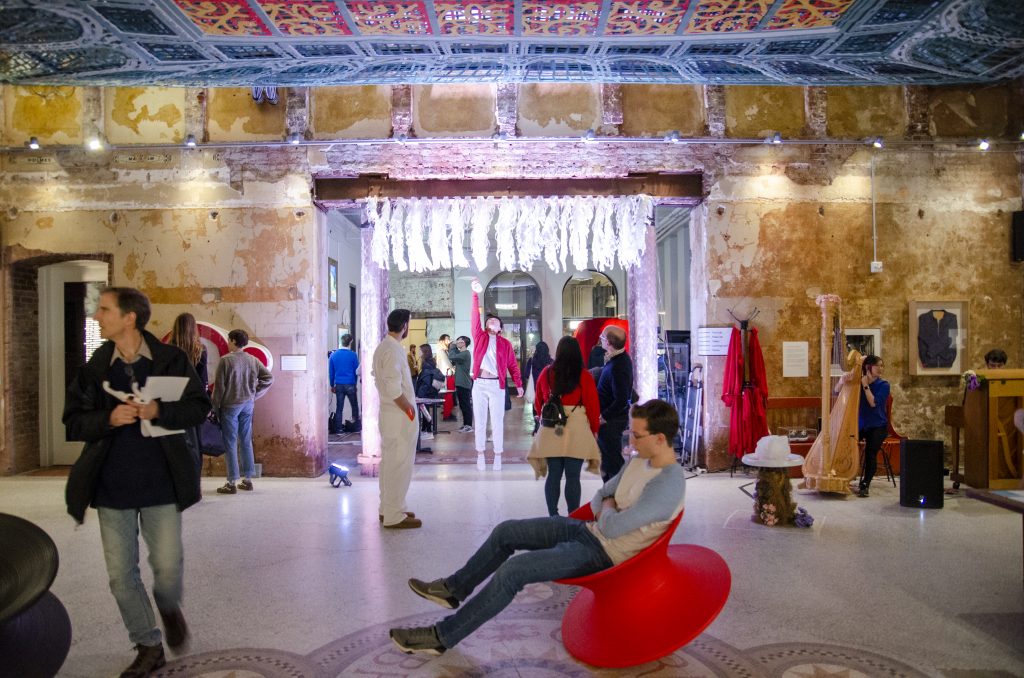 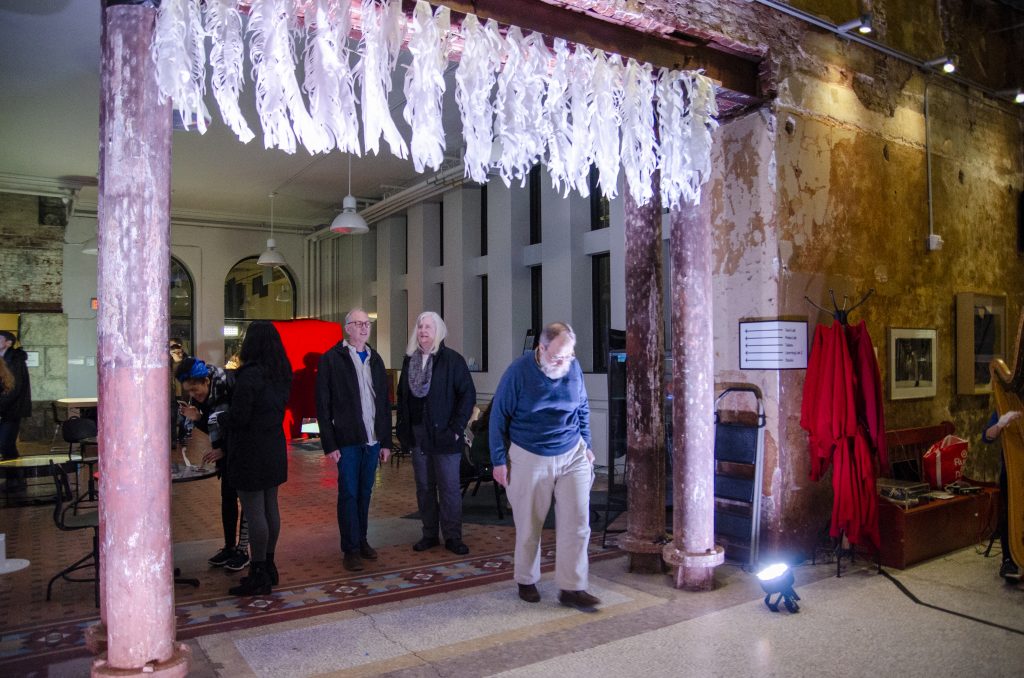 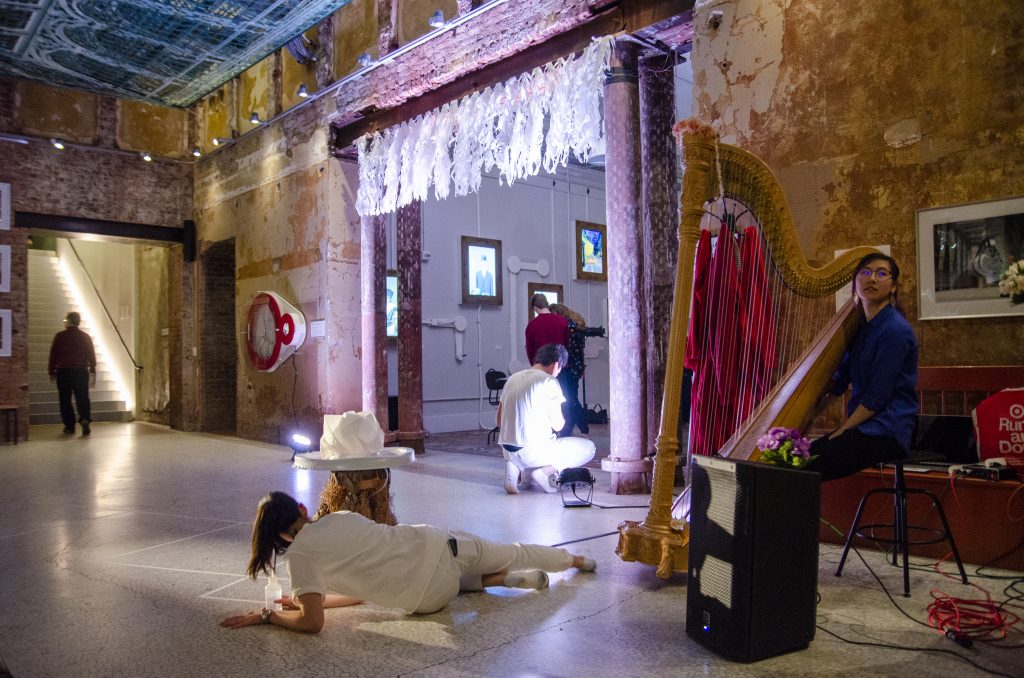 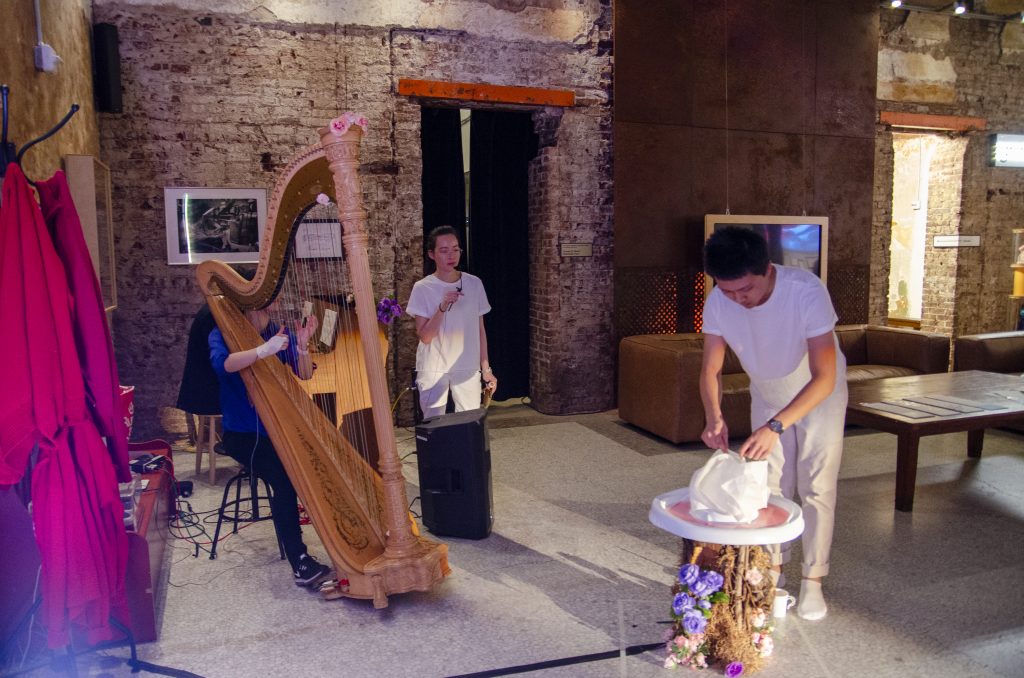 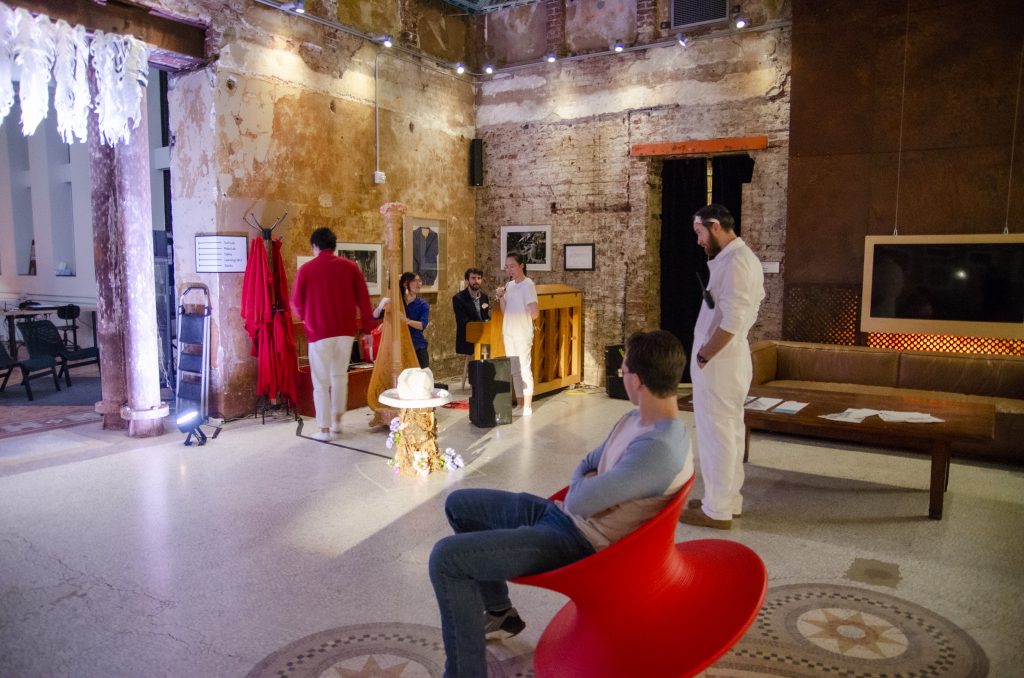 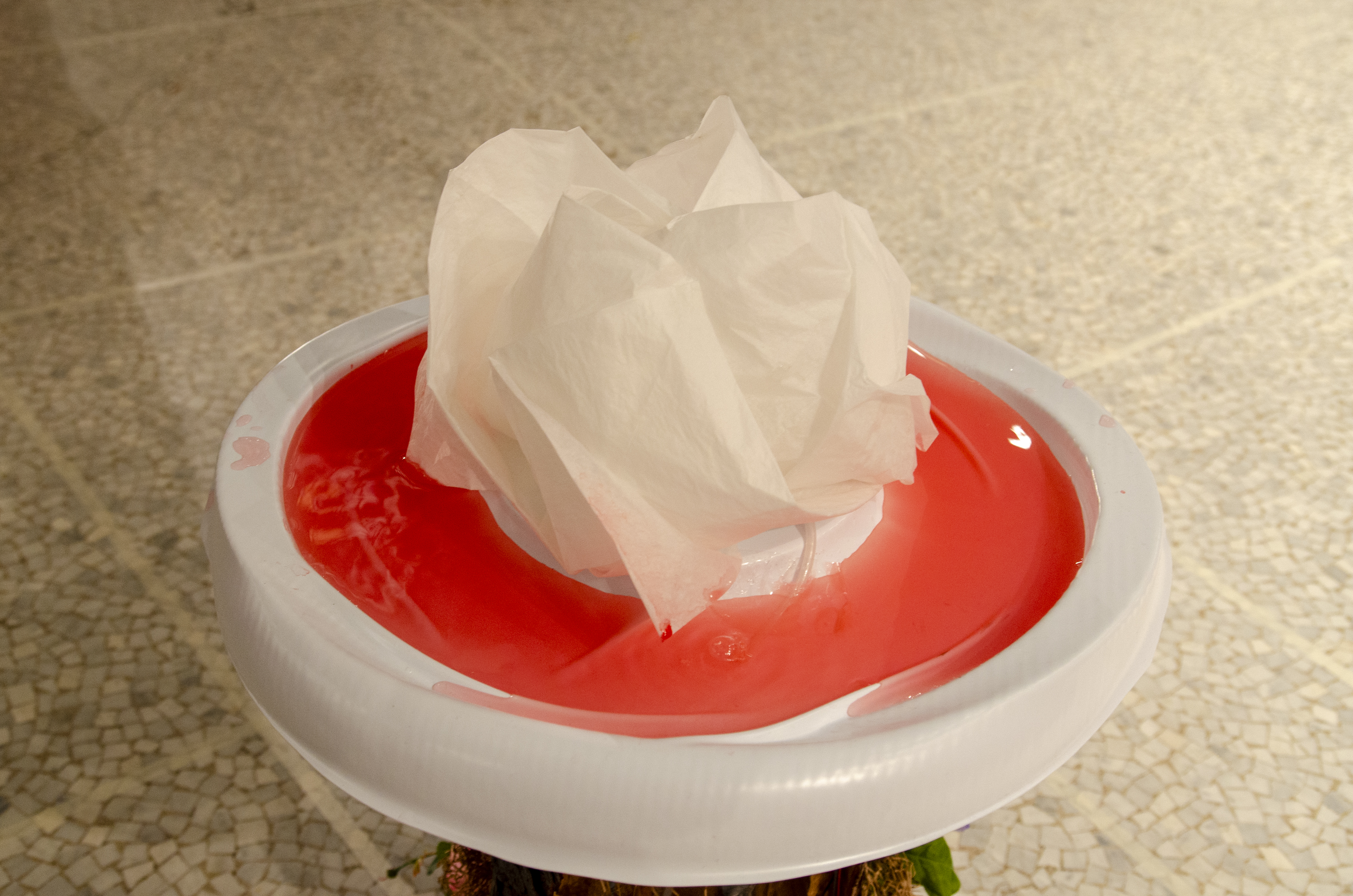 The Anthropocene marks the beginning of the age in which human activity affects the planet as a whole. No longer do our individual decisions and consequences impact only our perceived sphere of influence, but rather, affect the well-being of our ecosystem on a macro level. Babbling Creatures portrays the inherent complexities in a small scale system featuring several simple paper sculptures. The misdirection and flow of information constantly alter the state and behavior of those creatures to reveal the larger consequence of our seemingly insignificant daily actions.

Our dissociation with nature, through the construction of artificial landscapes, leads us to forget about the fundamental bond we share with other living beings in our ecosystem. Compared to the permanence of the physical erection of new apparatus to facilitate our own societal concerns, the rate by which nature is contaminated and destroyed as a consequence of our selfish pursuits far exceeds the rate in which mother nature can heal herself. To illustrate the fragile and weakened state of our planet’s ecosystem, the project is constructed out of translucent paper, embodying the fleeting beauty of nature amidst a sea of external threats.

Babbling Creatures is a family of paper interactive objects whose reactions are informed by audience and musician movements. Each creature harvest motion and human activity input and translates it into different physical behaviors. The creatures represent the natural world which is complex, interwoven and exists in a delicate equilibrium vulnerable to change. 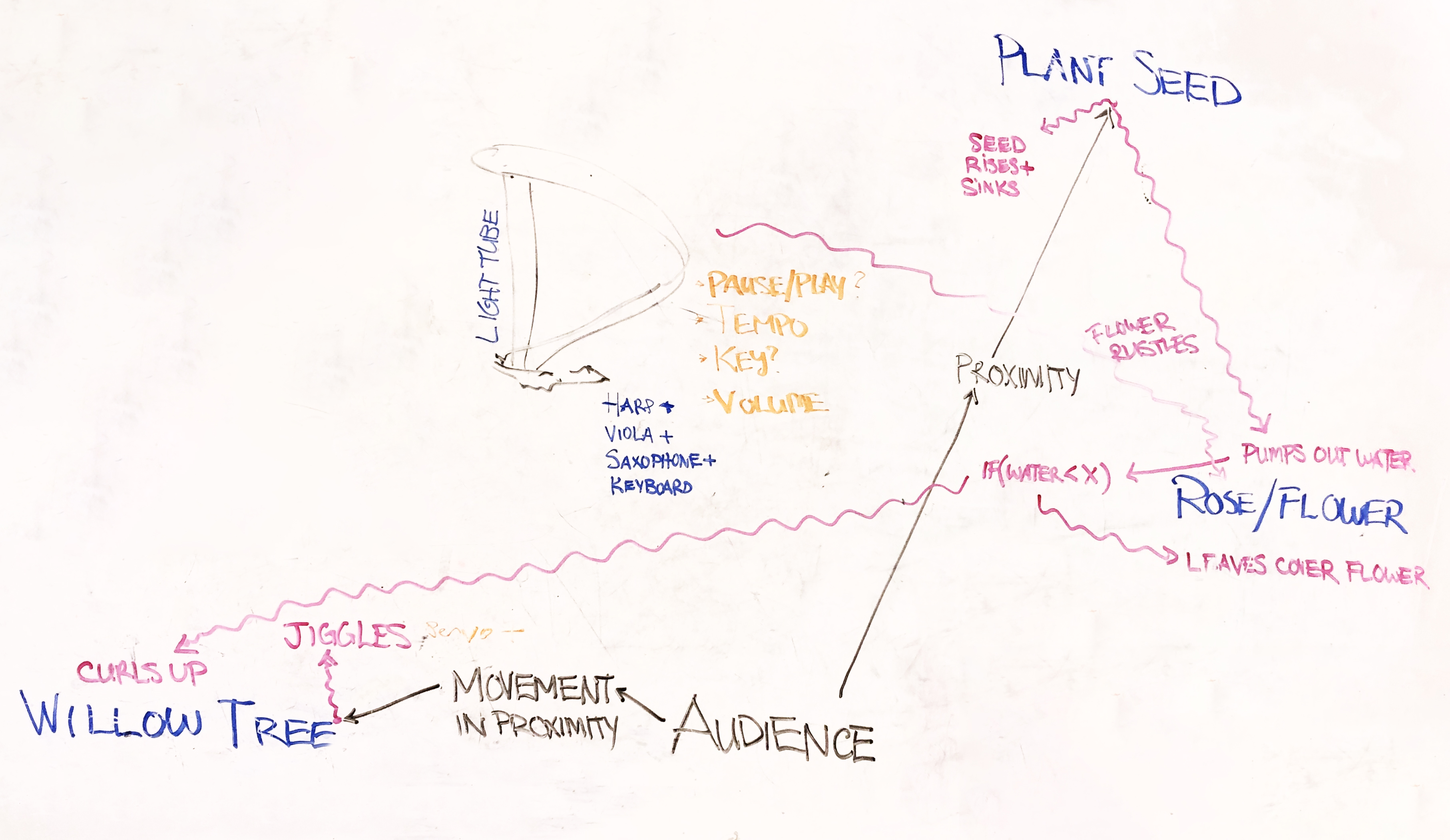 Initially, we planned to create three different creatures that have individual reactions on their own, but its consequences will also affect the behavior of others. This diagram portrays that world building which was planned at the outset of the project. We were aiming to create a complex network of interrelated creatures that spoke to one another in ways that weren’t perceptible at a quick glance. The larger blue text denotes the different creatures, while the wavy pink lines denote the different reactions and signals that the pieces share with each other. The black represents the audience and their role within the space. 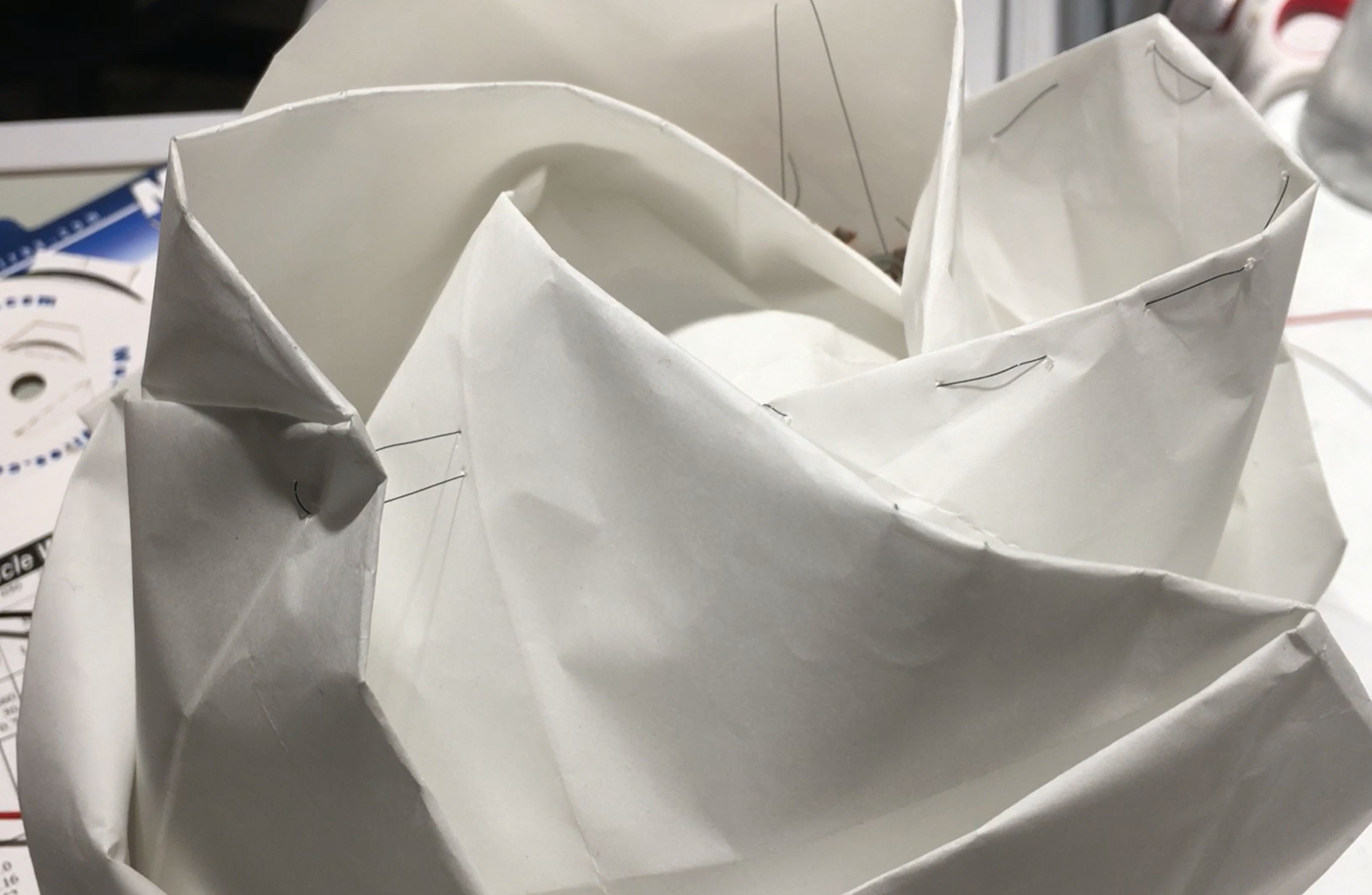 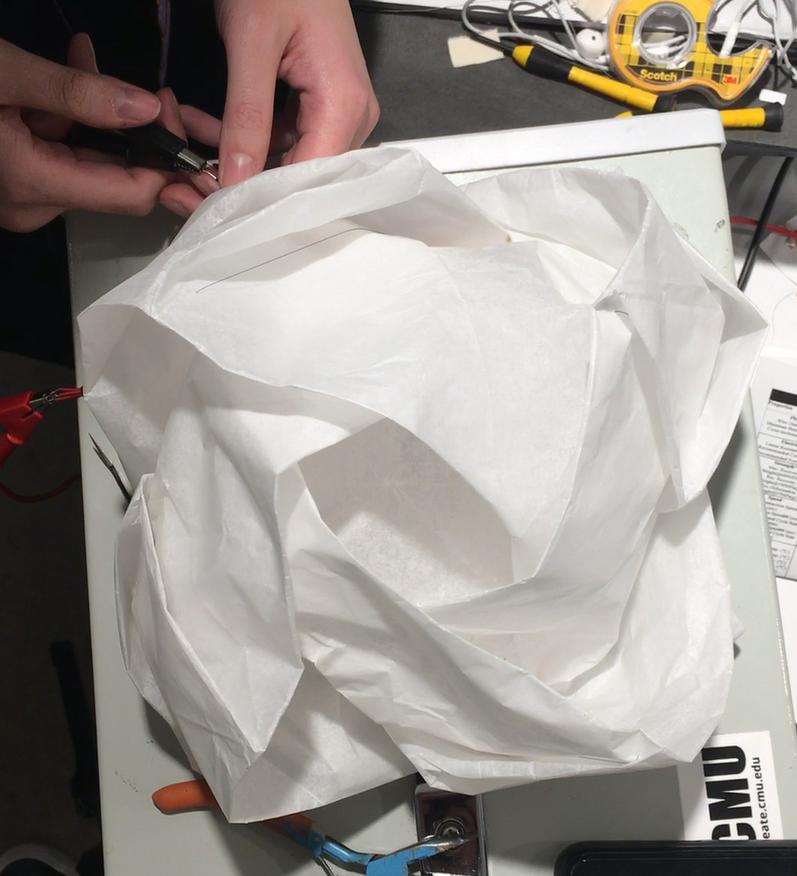 When we first began the physical actuation explorations, we were hoping to get the flexinol working to crumple the petals of the origami rose. Through a couple of studies, we were able to find a means of stitching the flexinol so that it was able to move the petals given its limited mechanical force output. We then implemented the flexinol, resulting in a small, but noticeable movement in the petals. Through further testing, however, we had difficulty implementing the flexinol and having confidence in it. One day it would work, and the next it would seem that it had burnt out and would need to be replaced. Given the amount of time required to set up the flexinol as well as our expended supply, we chose to use a monofilament system instead. We connected the monofilament to a servo and used it to crumple the rose, allowing for more movement, which in hindsight was perhaps for the better, given the noise level and many distractions that filled the MuseumLab during our final installation.

Water Basin for the Rose

To create the basin, we started by CNC routing insulation foam to make the base form to vacuum form with. 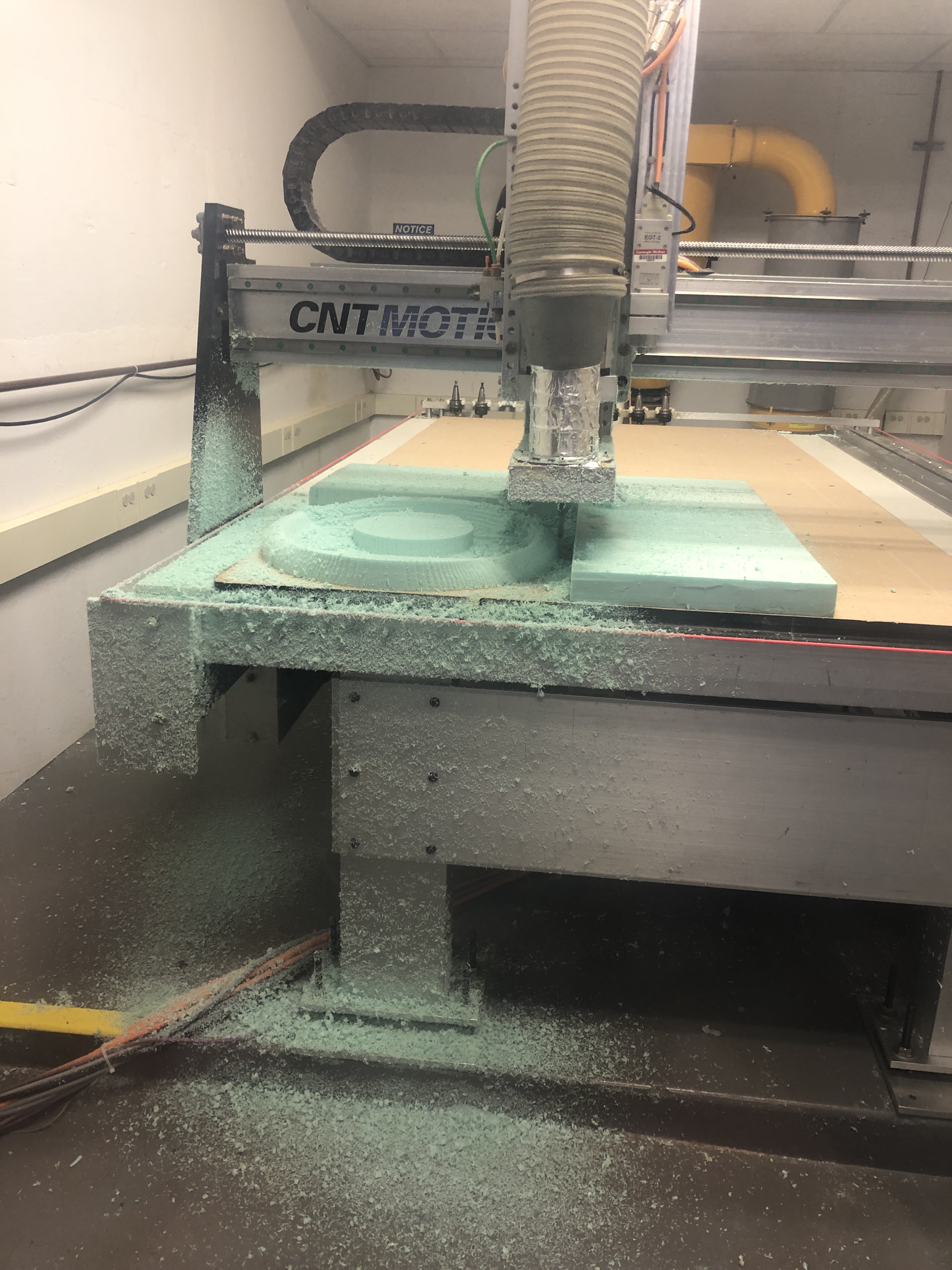 CNC Milling the Vacuum Form Base

Since it was our first-time vacuum forming, we had to do a lot of trial and error as illustrated in the image below. We did not have time to gesso the form to make it release easier from the styrene, and we used a 1/16″ thick material which reduces the level of detail that we hoped for the final product. 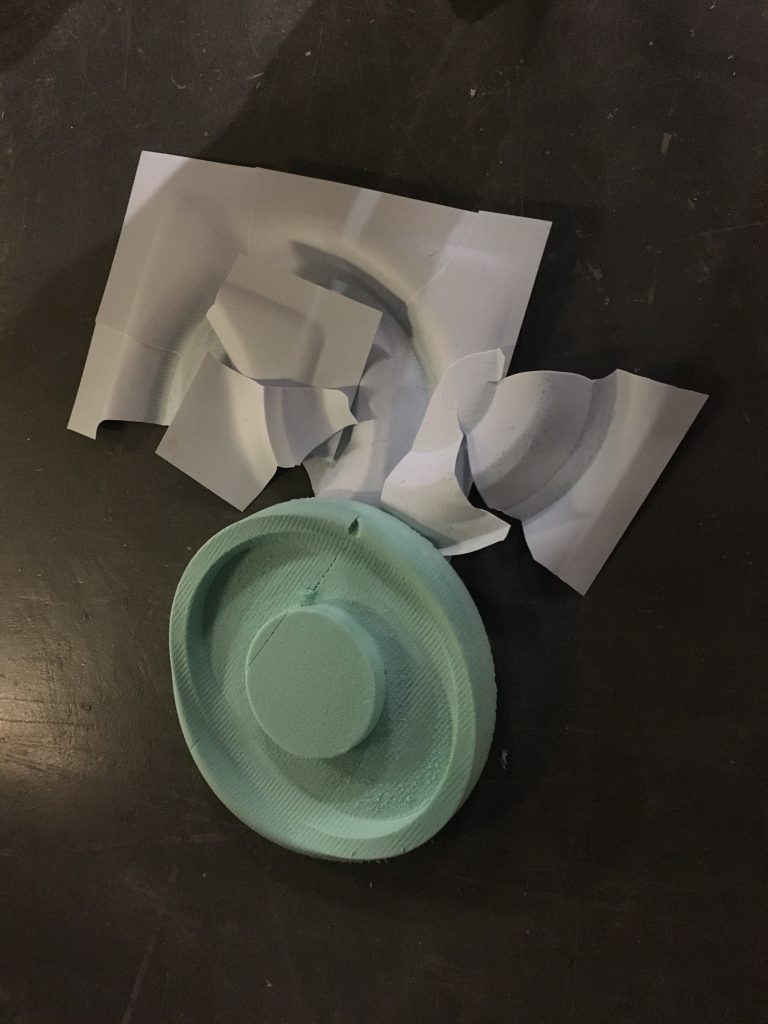 Although the vacuum forming created more interesting forms, it also took us out of our comfort zone as a digital fabrication tool that we weren’t as familiar with. 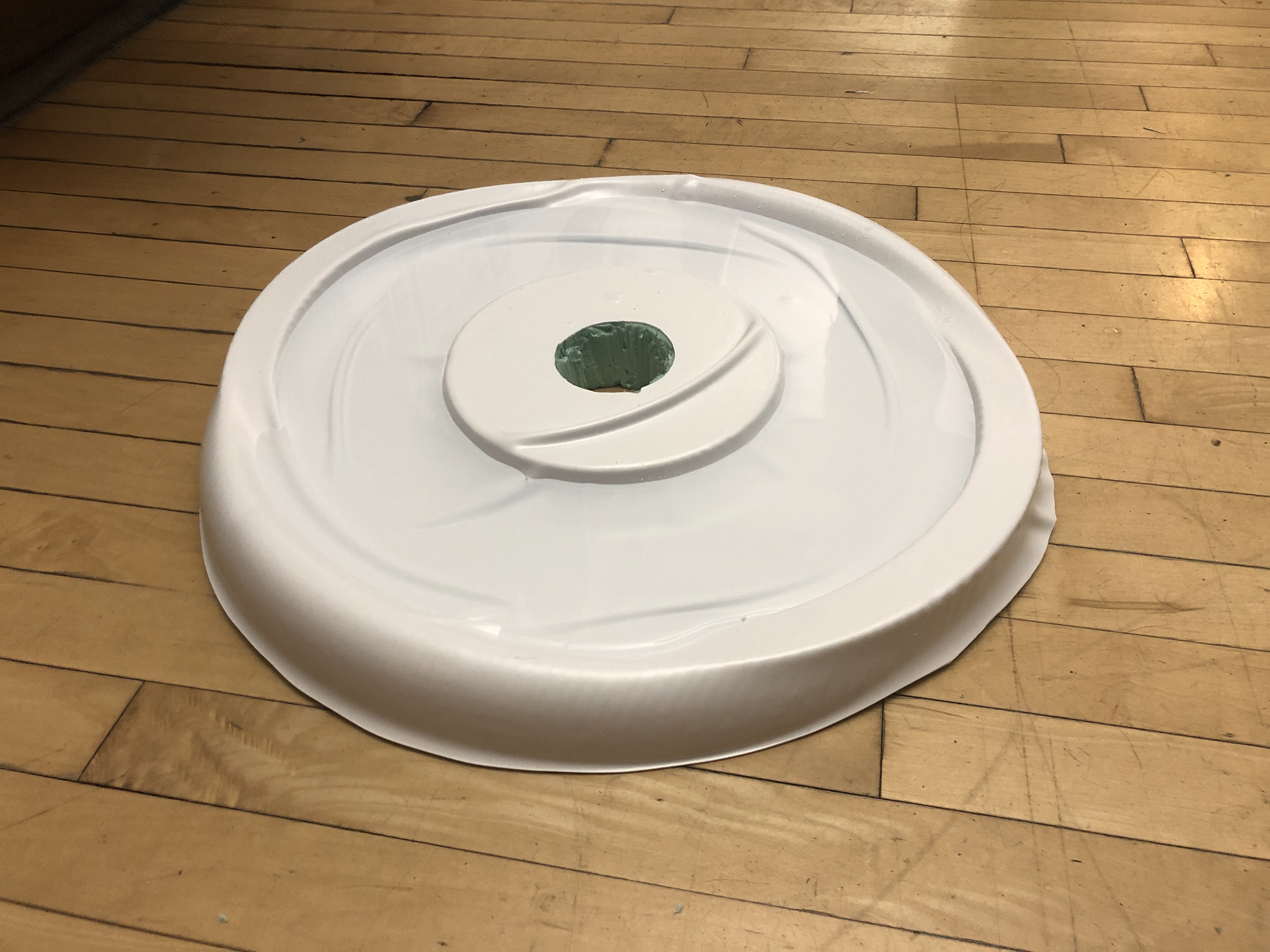 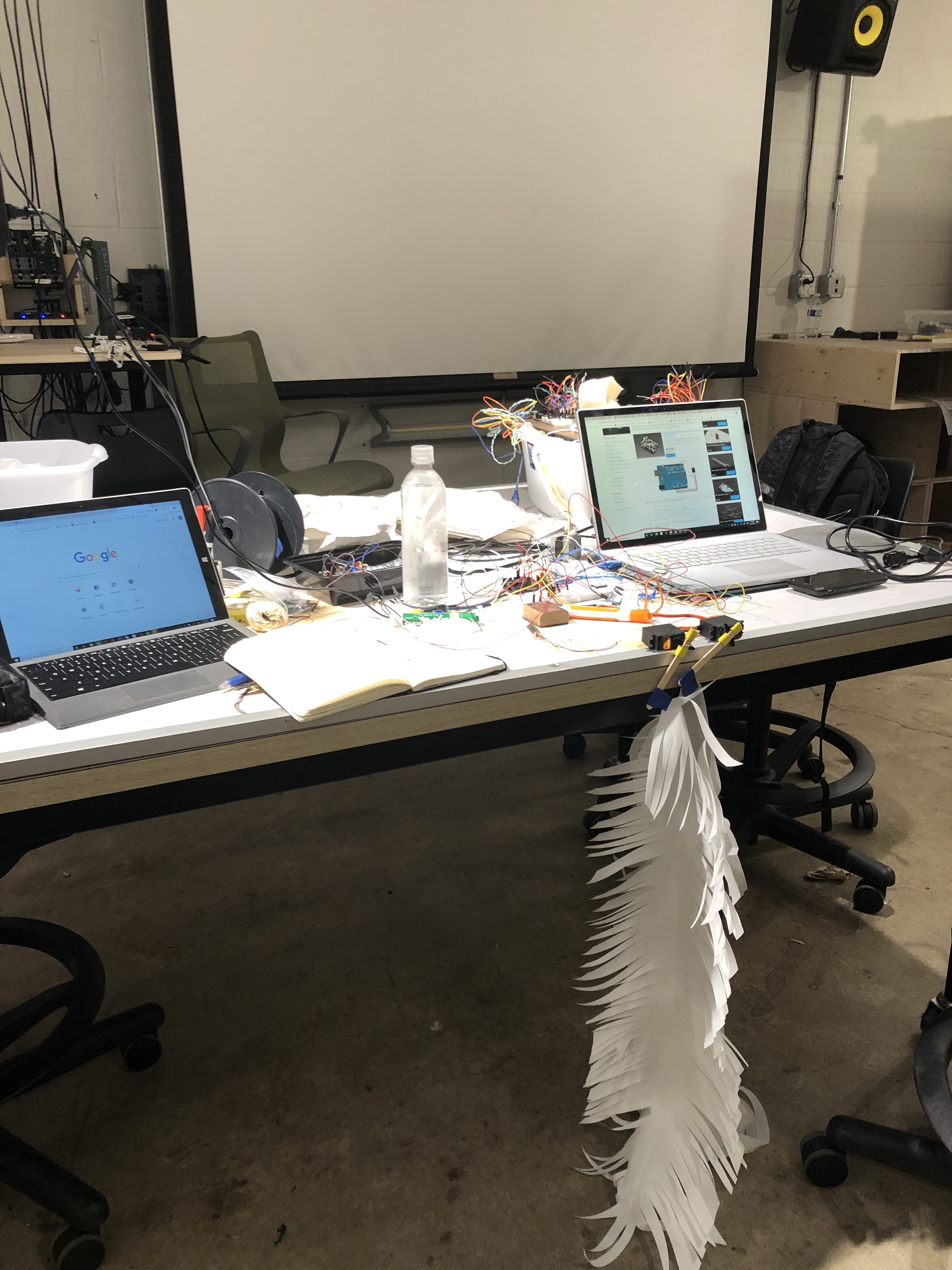 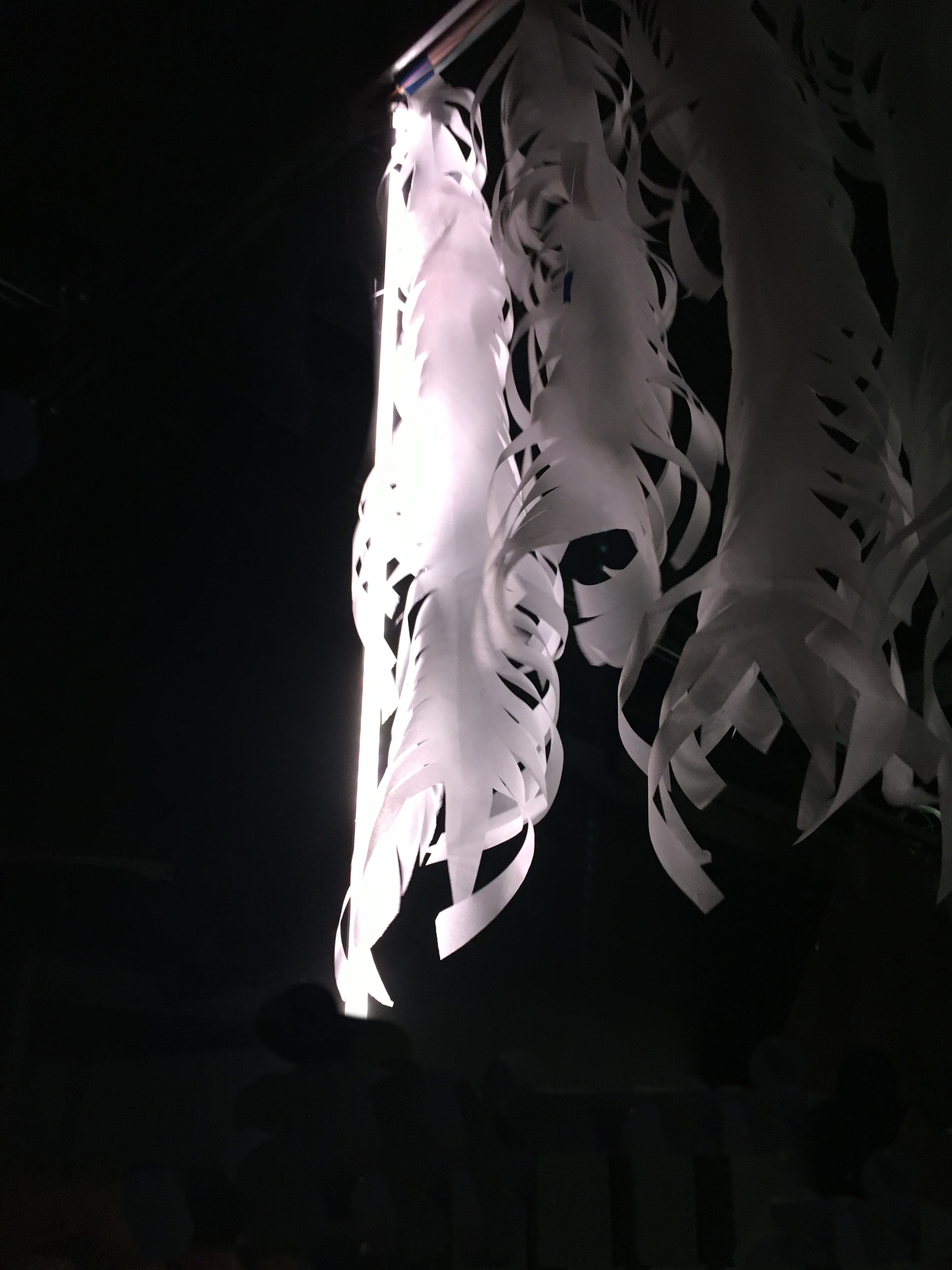 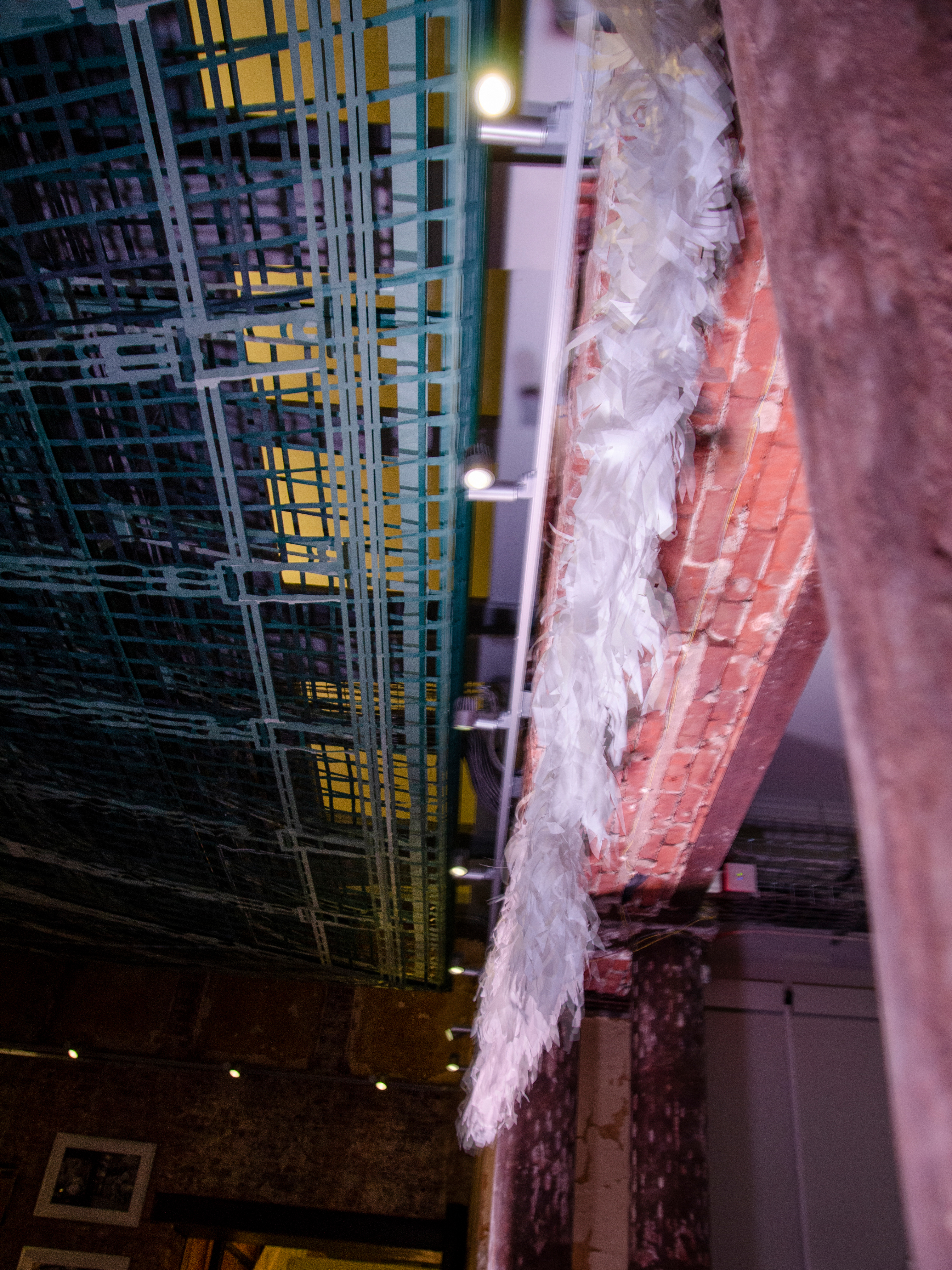 The progression of the willow leaves began as a single leaf, then moving up to several, then to an entire array. We chose to hook up the servos from the side despite more mounting difficulty because it allowed us to face less physical resistance as the leaves were shuffled against one another. 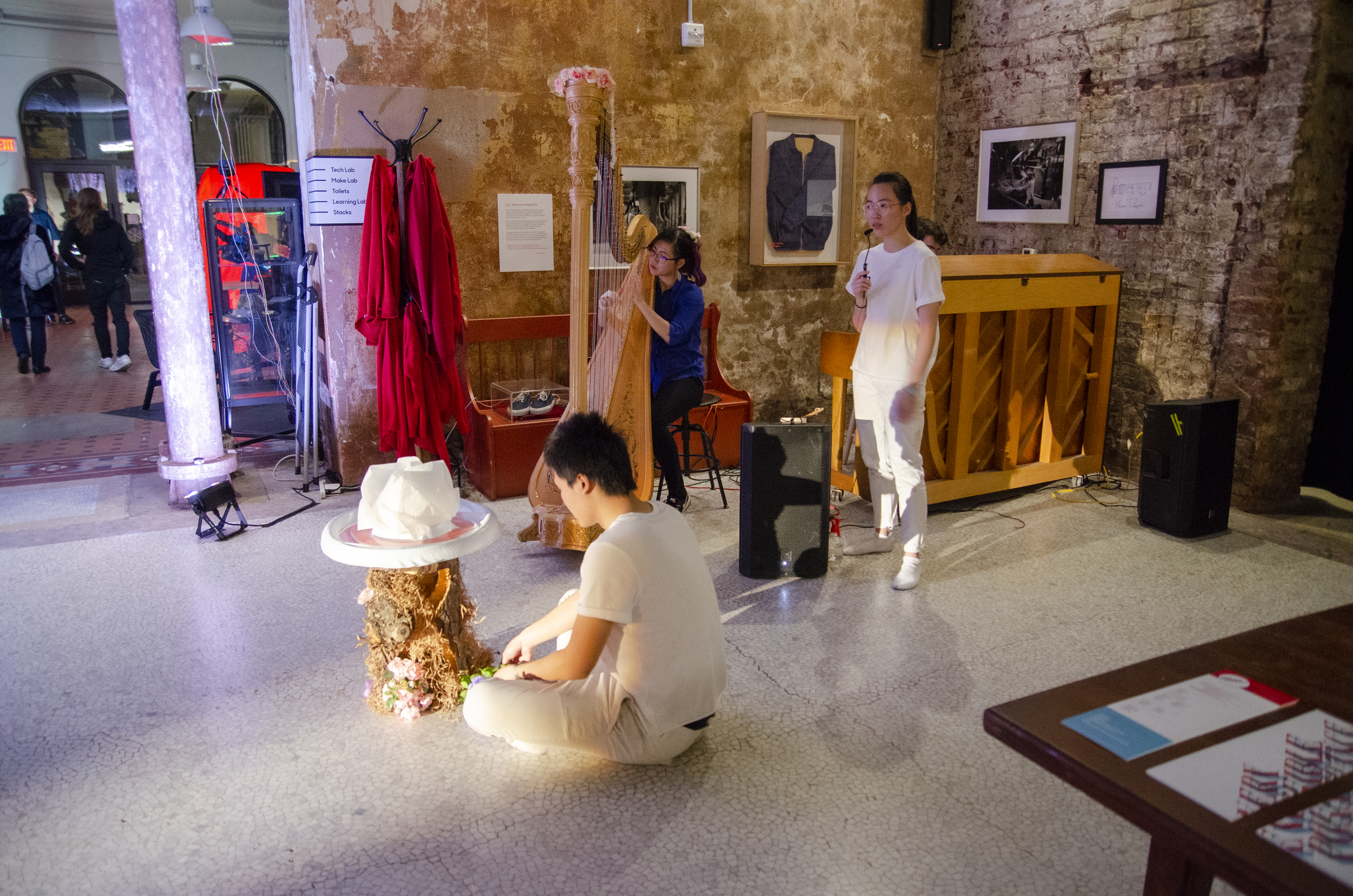 Our collaboration with the Exploded Ensemble was mainly through a simple wearable that had an embedded flex sensor attached to Connie as she played the harp throughout the night. Similar to the conceptual underpinnings of her musical piece which distorted the audio files of many languages across the world to accompany her improvisation with Nicholas, Connie’s movements in turn distorted and crumbled the rose that sat on a white basin. 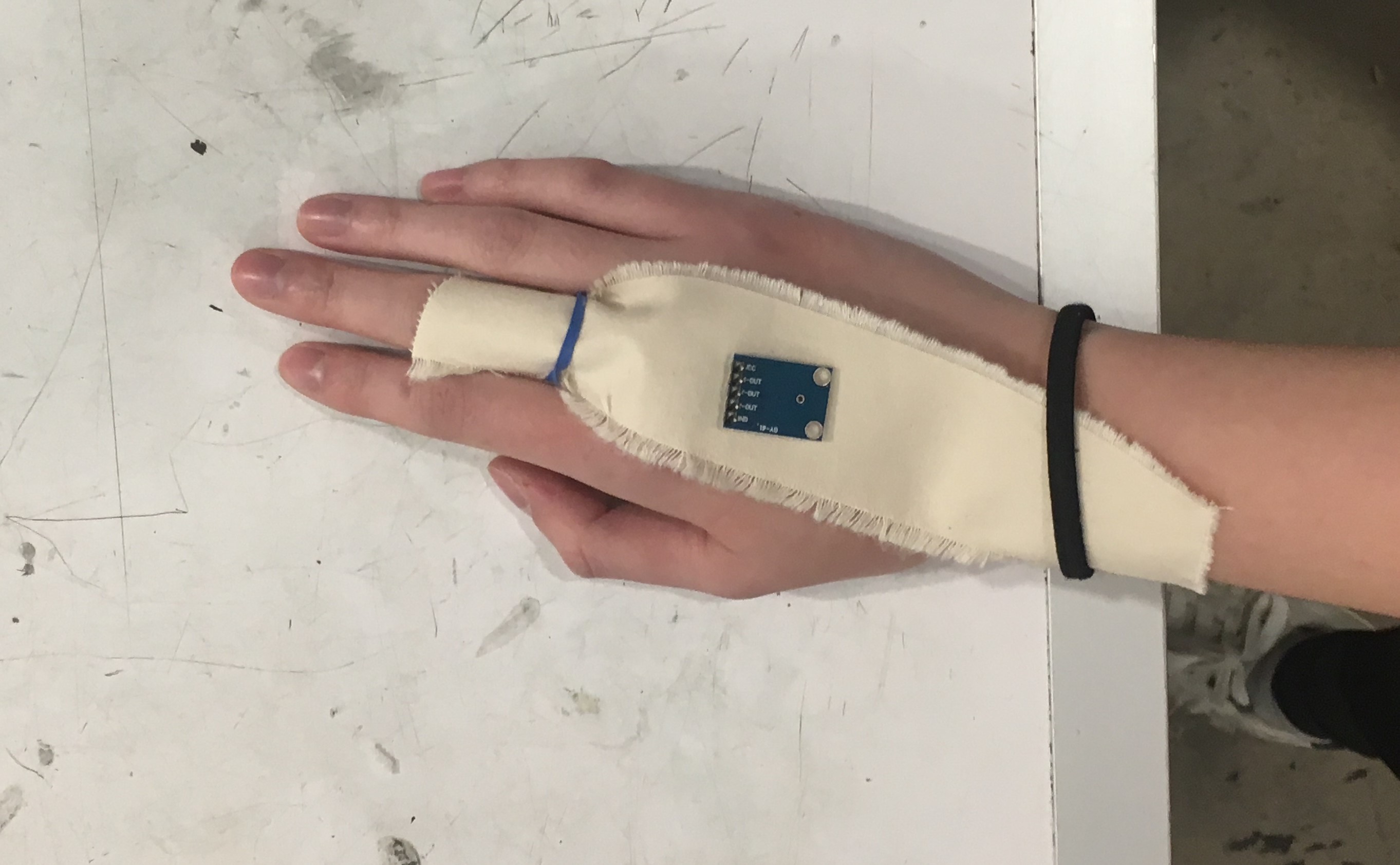 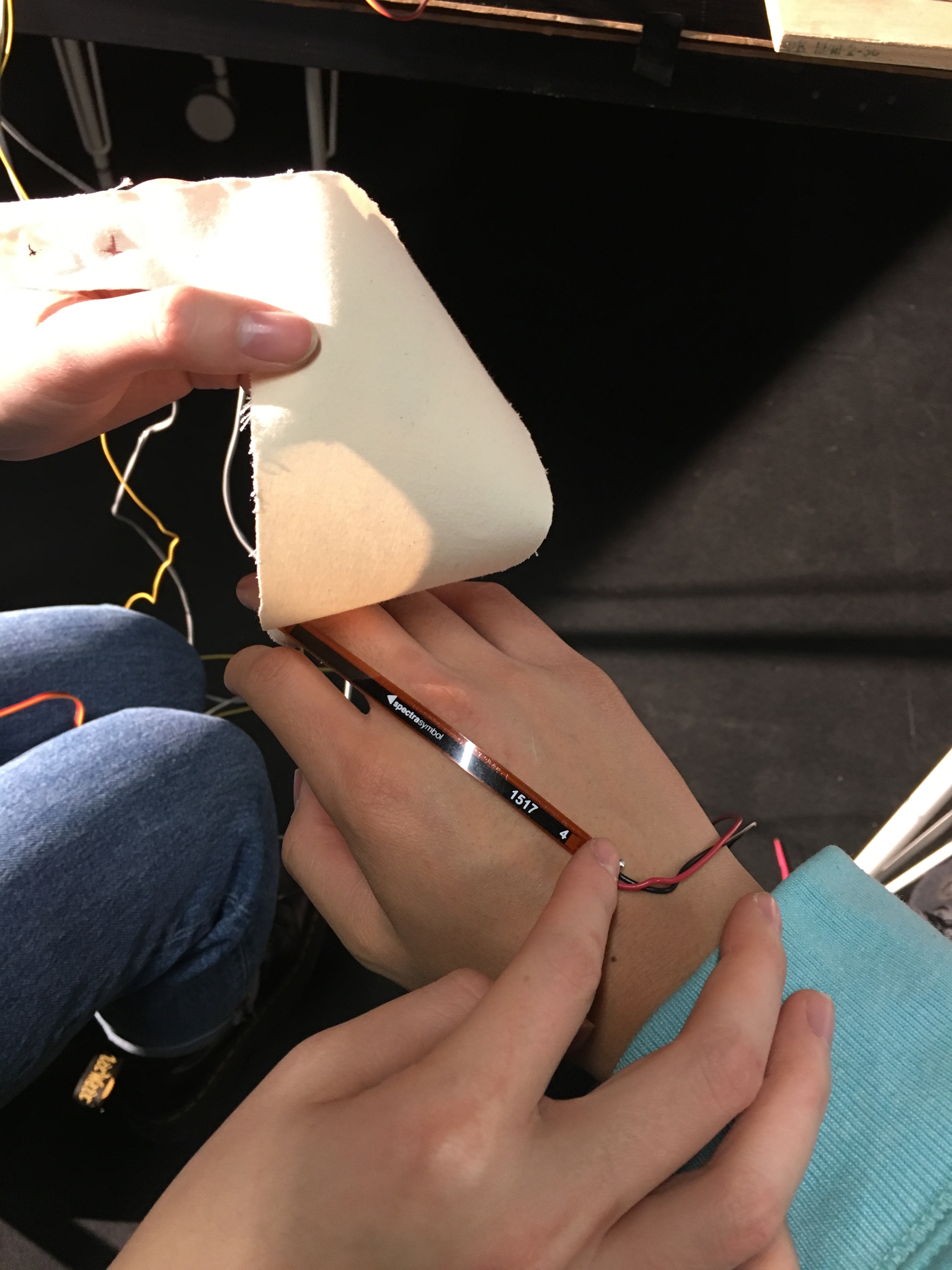 We had also considered the use of an accelerometer, but the complexity of the data and information wasn’t as necessary for the interaction, and the piece also would have introduced more physical challenges in terms of disguising the sensor and wiring the five pins. 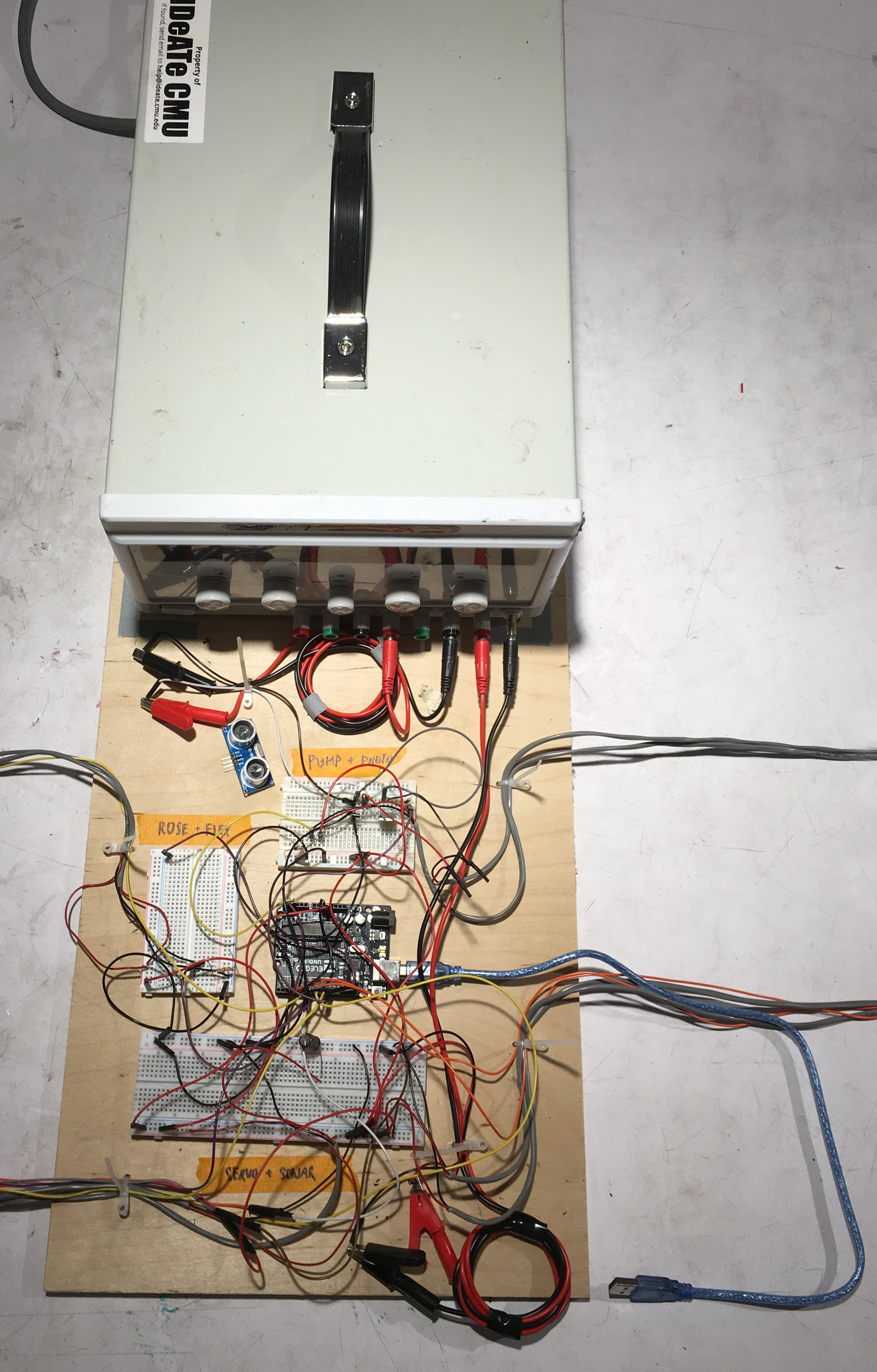 Our strategy for handling all of the external power and wires was to use a sheet of plywood to mount the breadboards and Arduino to. As we got closer and closer to the final installation, we realized that we were spending exorbitant amounts of time setting up the power box and cleaning up the power box after our work. As so, we claimed a power box that would be a part of our board, allowing for the project to be carried in almost all of its electronic entirety using one sheet of plywood. We also, considering the transportation and risk involved with long wires, decided to use zip-ties to secure the plethora of wire bundles. 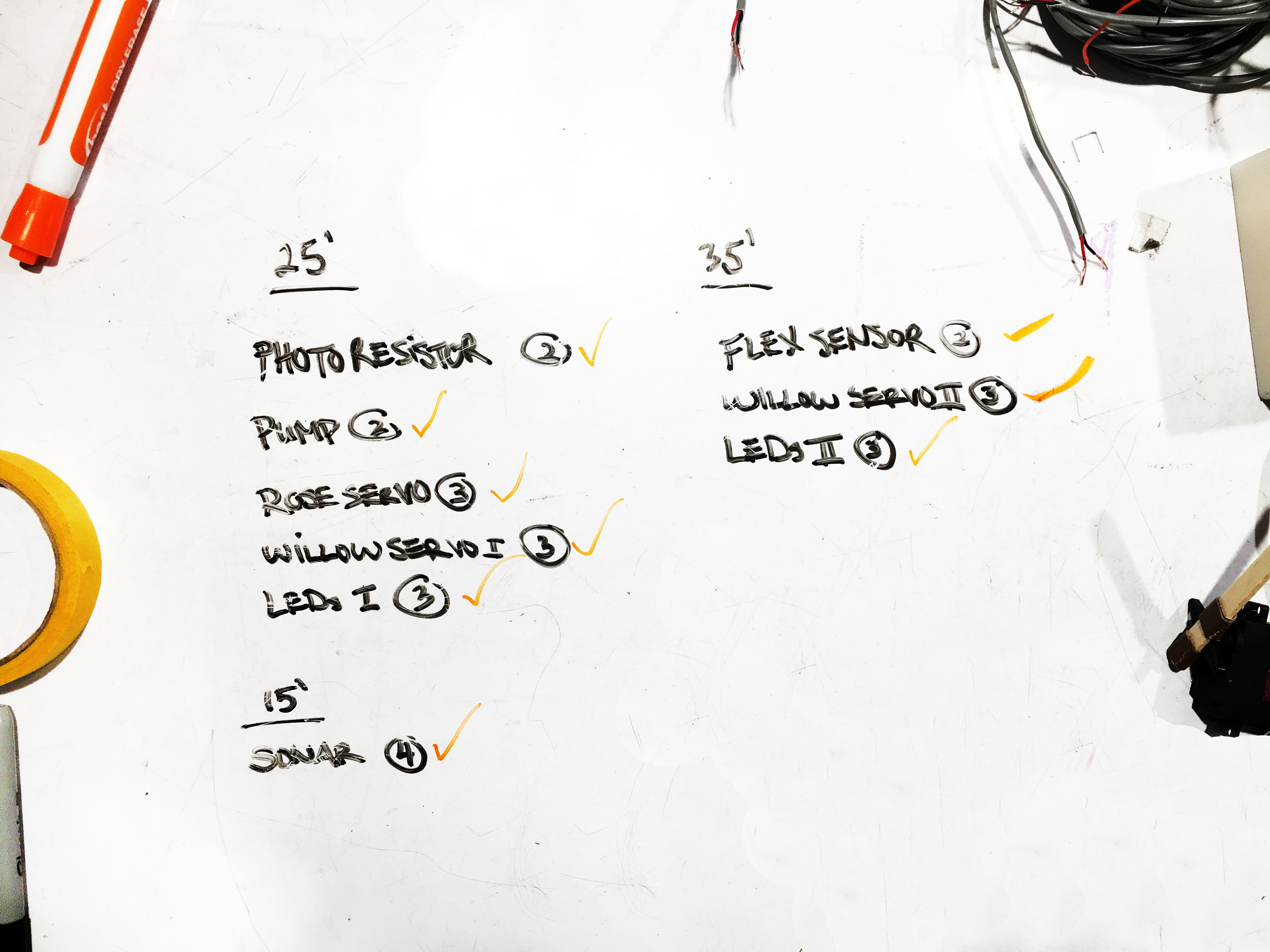 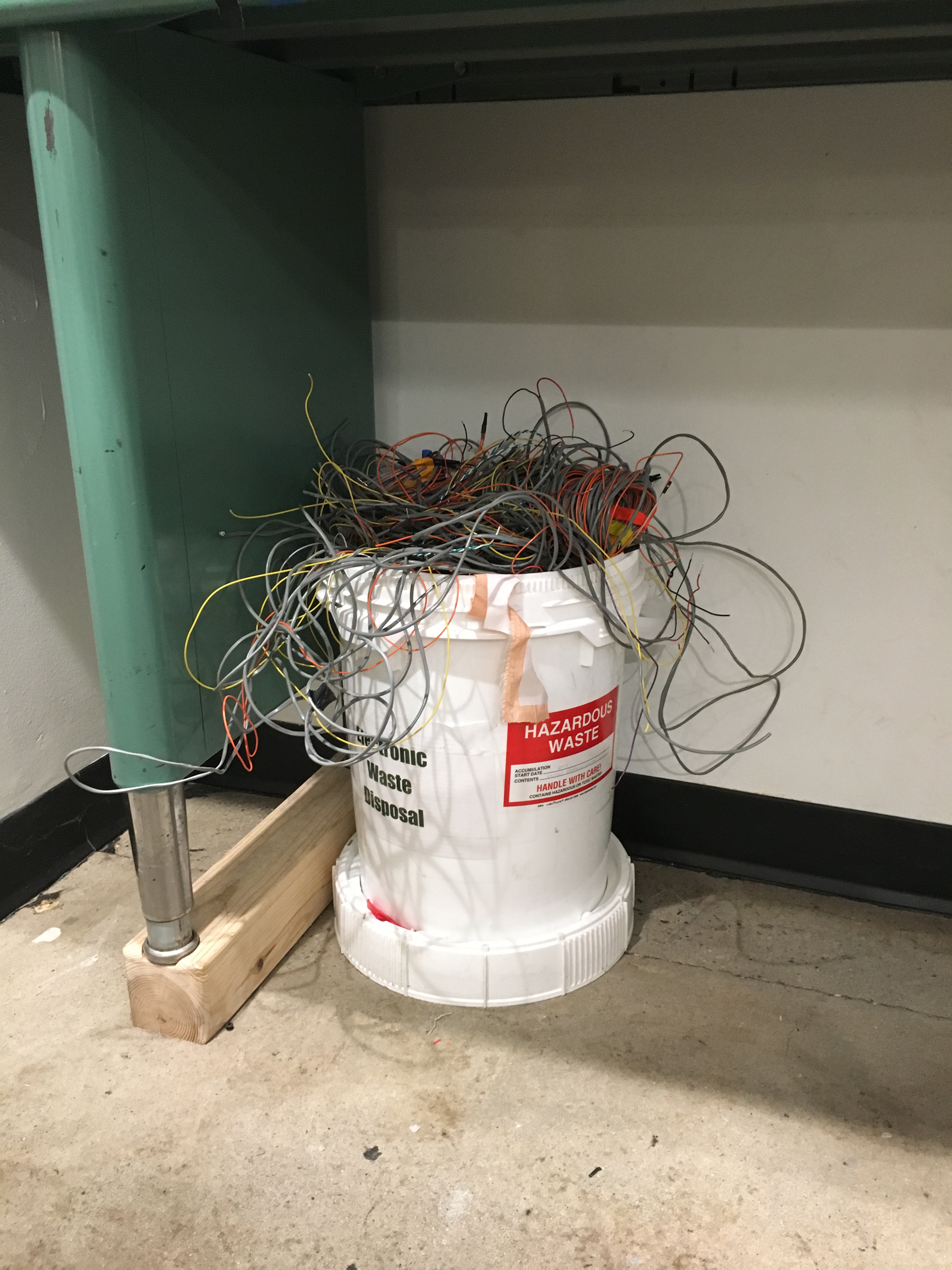 Wires have consistently been a critical consideration of both of our projects in the past. Unfortunately, given the environmental character of our project, we again resorted to using wires to bridge the connection for all of our moving pieces. Although given the time frame of the project it wouldn’t have been feasible, looking forward we will definitely heavily consider more wireless options which will also allow our work to be more portable and mobile.

Throughout the project, we spent the majority of the time realizing the physical aspect of the project. From the array of willow leaves to the rose and all of the technology that was implemented there, we quickly realized that we had to scale back in terms of scope to ensure that each creature would have a presence and role respective of how much time was invested in bringing it to fruition. Much of the time spent during installation day was related to the installation of the willow leaves. Although simple in the aesthetic, mounting paper, wires, and servos to a rugged, dusty surface, lighting up the leaves and positioning the sonar were time sinks and required multiple attempts. The wiring, although it was bundled neatly, was also a challenge given the sheer abundance and length. Unraveling each bundle, merging bundles that were headed to a similar direction, and taping to unforgiving surfaces definitely slowed our progress, but also made the preparation worth the effort! By having a project that focused mainly on creating a space, much of the coding became more simple naturally which allowed us to fully immerse ourselves in the costuming, lighting, and staging of the environmental installation.

In retrospect, scaling down the size of the installation and broadening the number of creatures that were smaller in size may have contributed to a more network feeling, though it would have been much more difficult to implement technically and in regards to the designing and fabricating of more pieces and parts. Looking forward, we both want to continue to explore the performative aspects that we delved into for this project as well as further expand on our technical know-how and capacity.