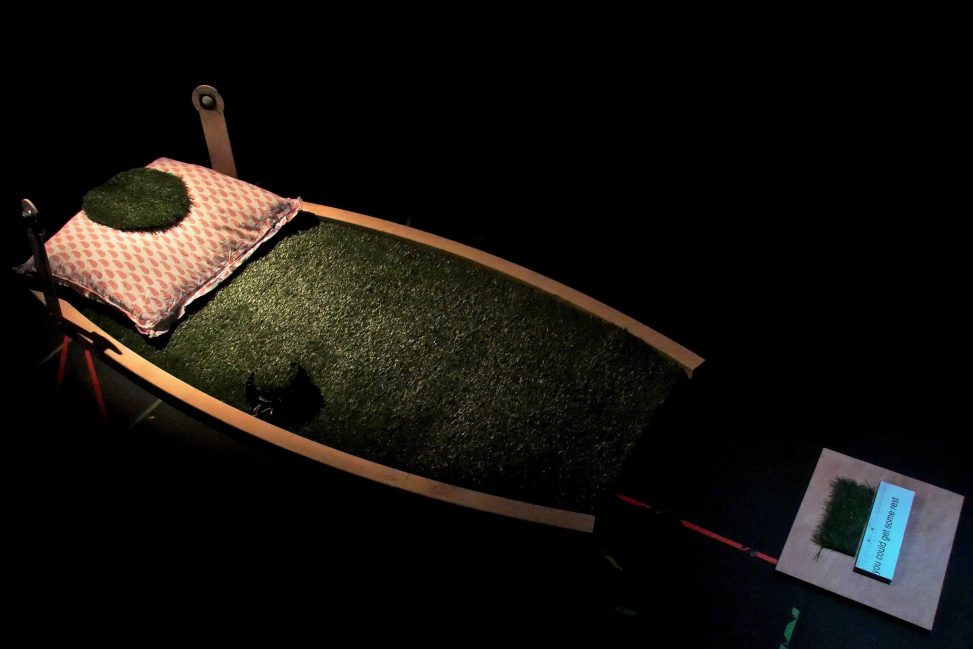 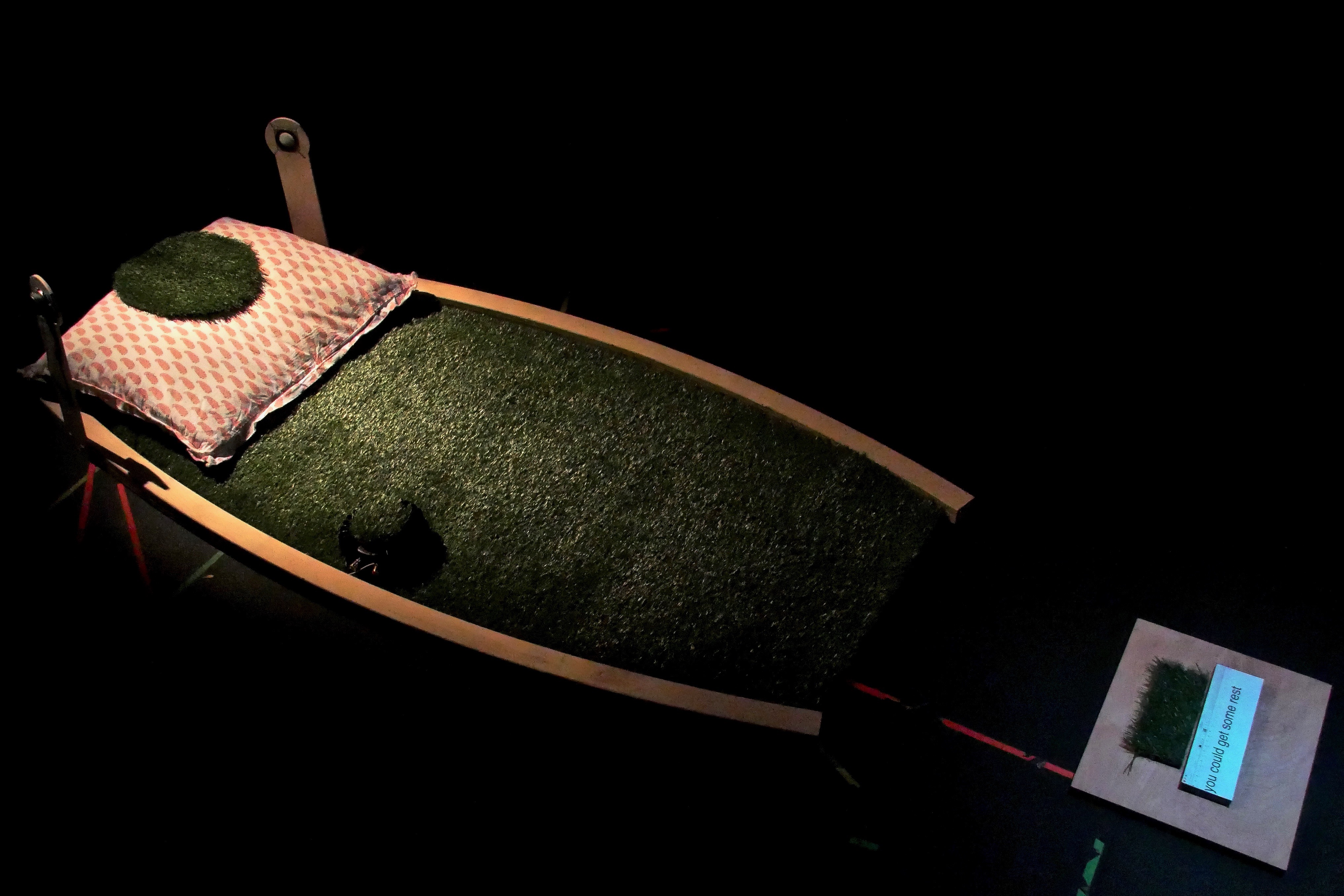 What Is The Thing?

A system to comfort, entice, and demand conditions of physical trust.

Three pointy-looking stools around a room, each topped with grass, each with a bit of text and an interactive thing on top of it. One stool has a mirror and a veil, one has an old green telephone, and one has a little child’s microphone with a switch. Interacting with these things makes little bells ring in other locations in the space. The bell sounds come from small speakers in the shapes of cubes hanging from the ceiling. Finally, there is a little oval bed on the floor nearby, with a grass mattress and a pillow. When you lay on the bed, there are little speakers by your ears that immerse you in natural sounds, and little bass speakers in the bed that give you a massage. When people use the things on the stools, it affects the sounds and feelings you get laying in the bed. If all the things on the stools are being used at once, a person in the bed will hear a special bell and will get a quiet secret message.

The stations are positioned around the space, so they can be discovered and interacted with individually, with their effects adding up on the edge of view or hearing. The texts by the stations are printed on small blocks, depicting Helvetica font in a mac os TextEdit window. 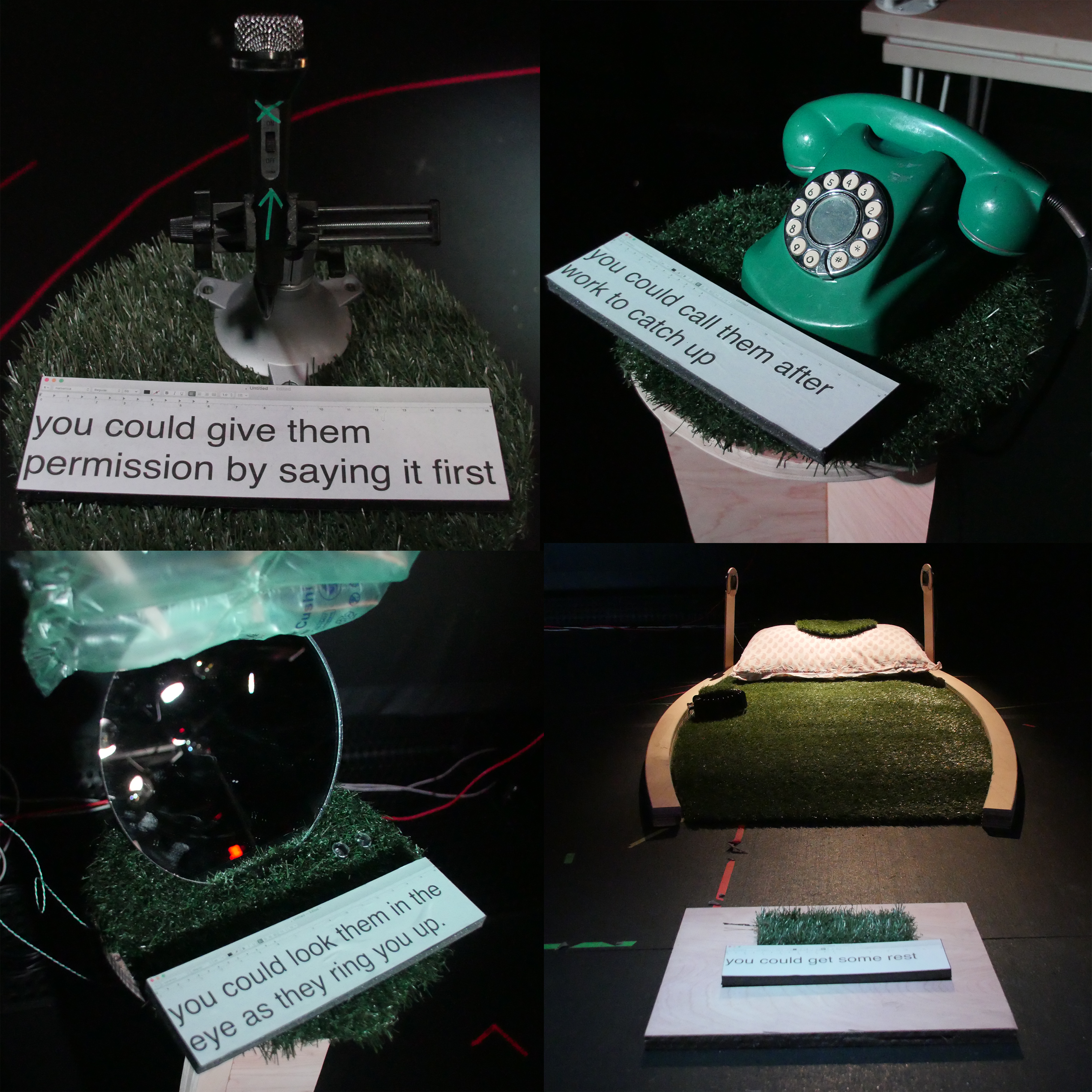 Objects in their natural environment 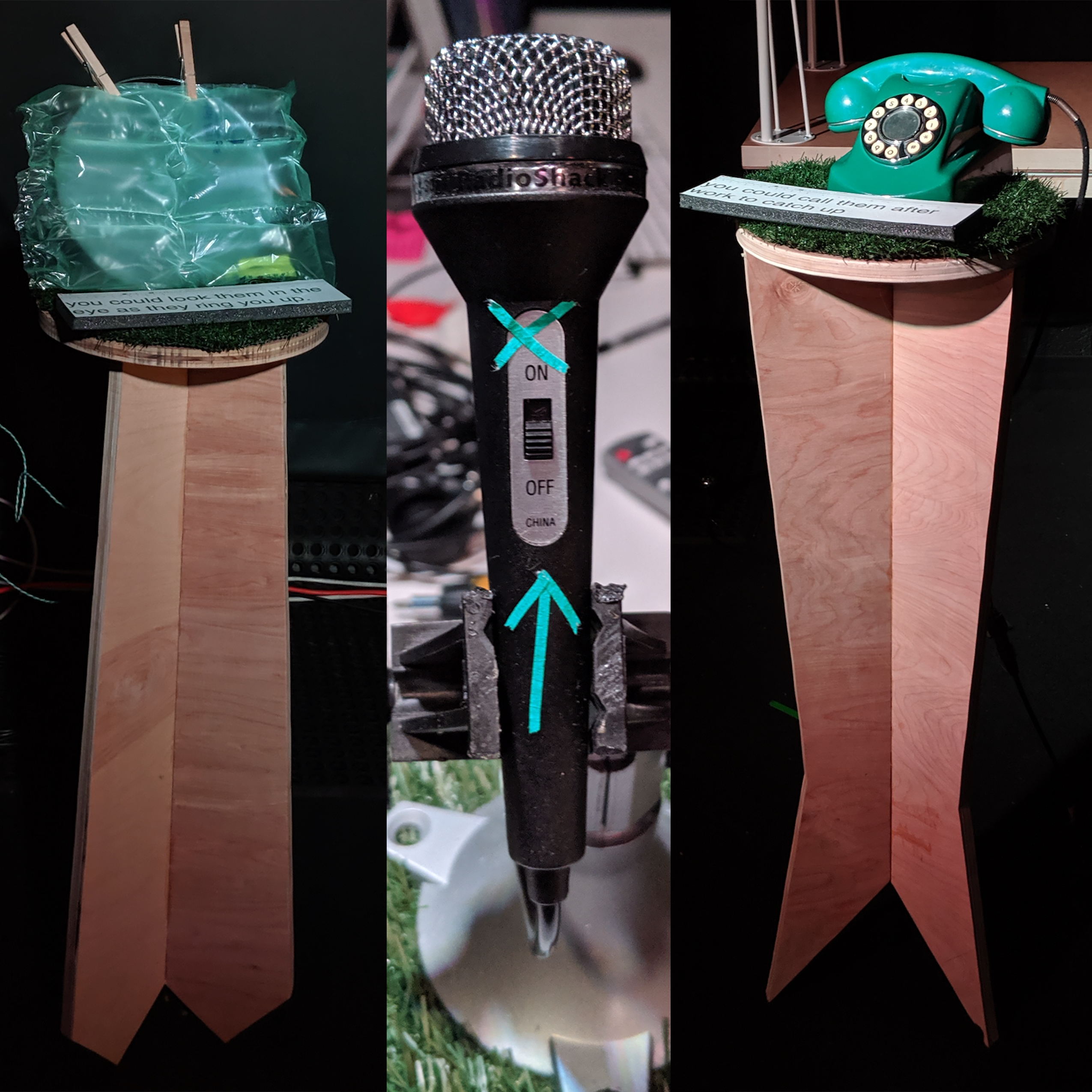 Objects in their natural environment, detail 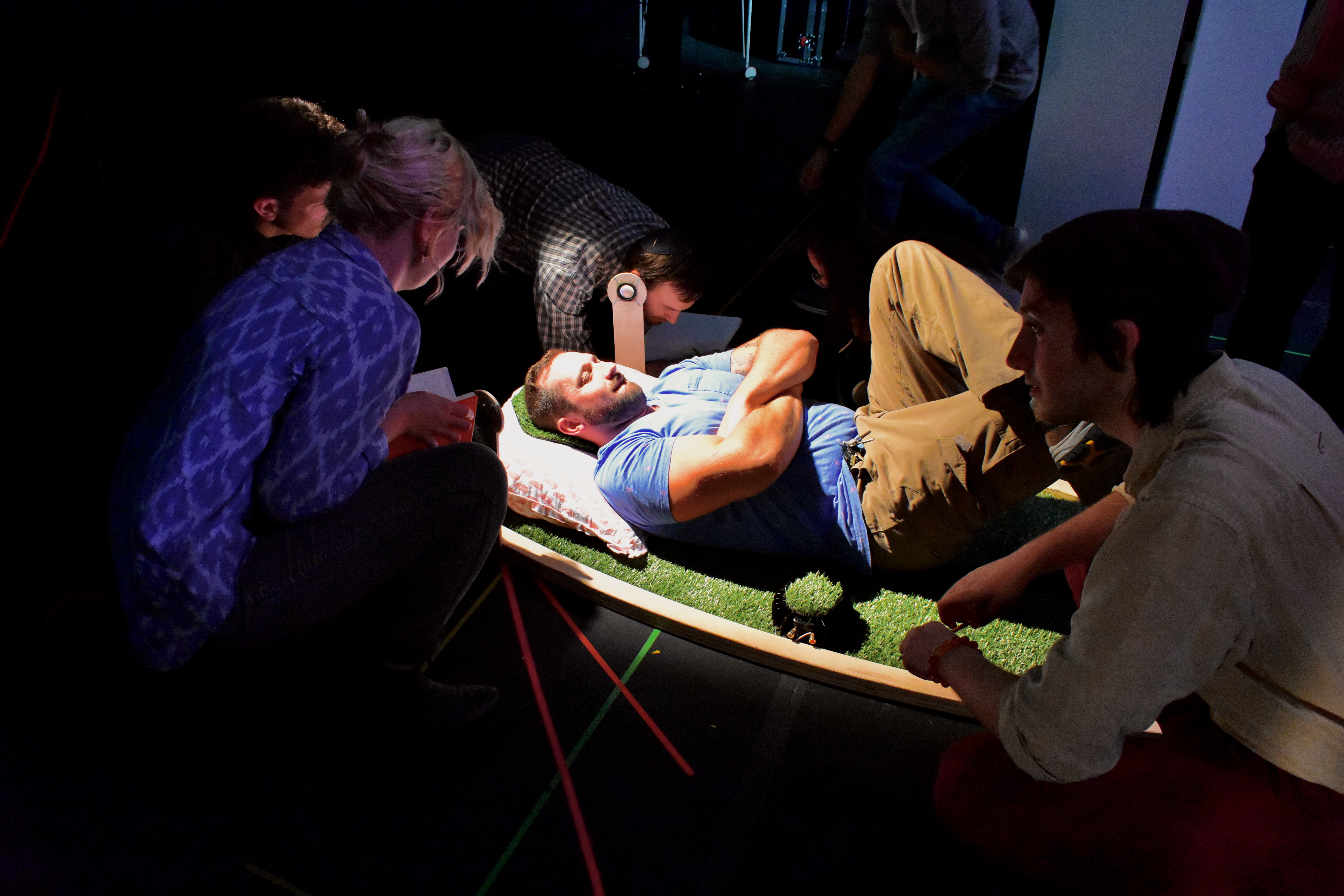 The bed station in use 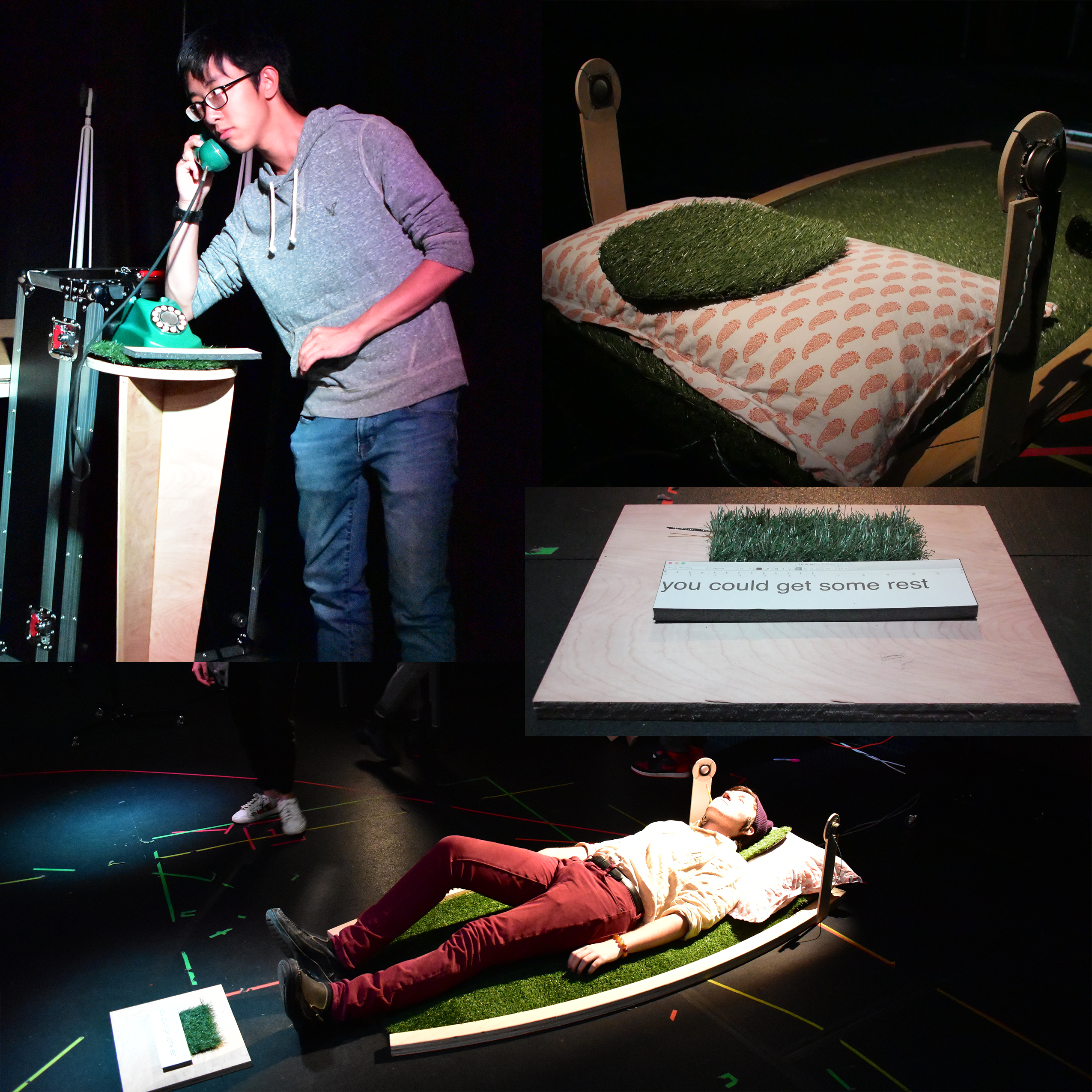 WHAT WAS THE PROcess?

Step one: I was interested in machines that would have a contemplative, peaceful quality to them, and which would involve a viewer’s physical body. First, I came up with a number of impractical and expensive projects that I didn’t know how to do. A few of those are noted below. 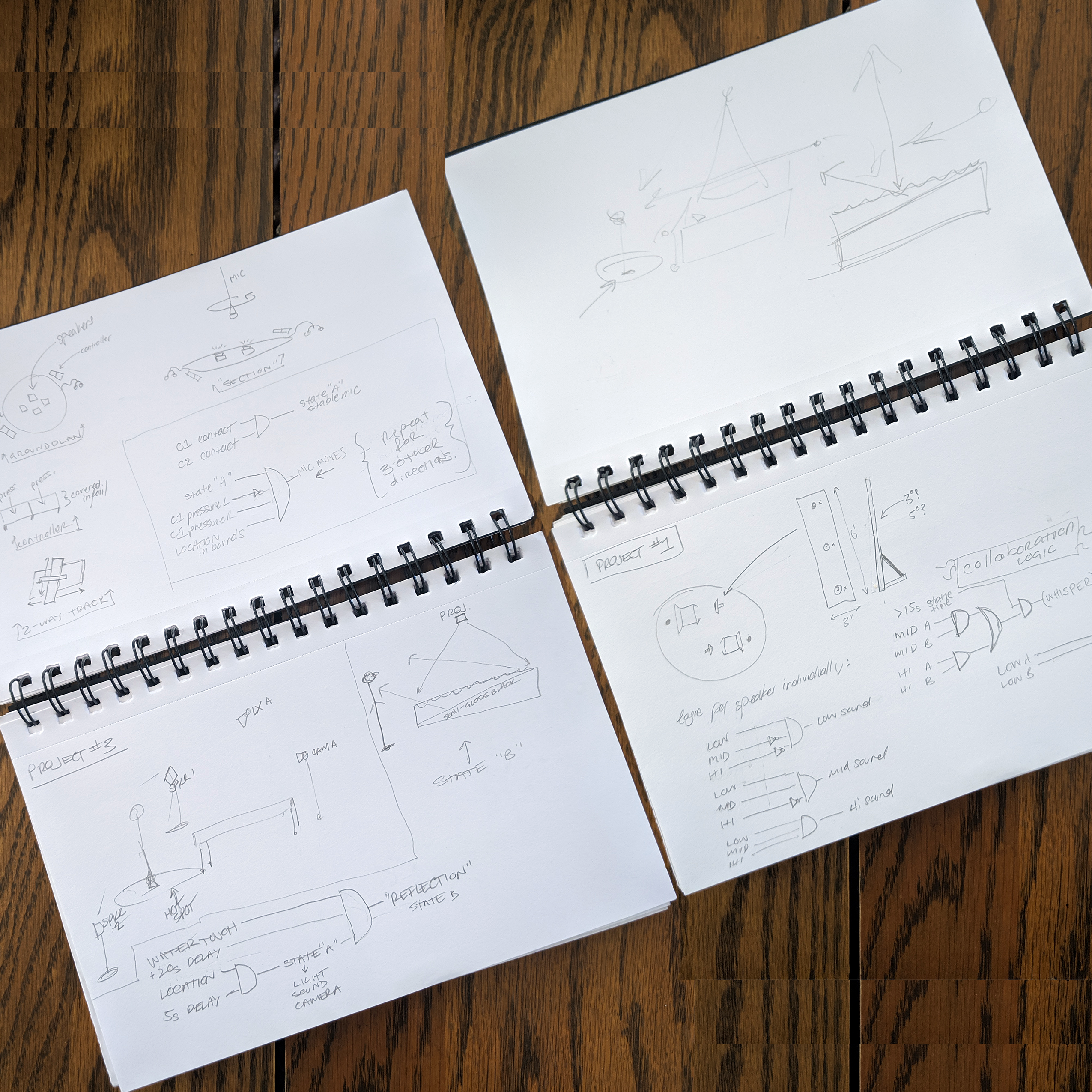 Step two: I decided to focus on feeling rather than technology, and see if that resulted in project ideas that were a little easier to build. Thinking about recent moments in my life: at the grocery store, on the phone to a parent, calling a dear friend who I miss but have difficulty reaching out to out of the blue, I thought I could give myself some options for how to live with a little more openness, and hypothetically (working ahead with deductive reasoning) a little more joy. 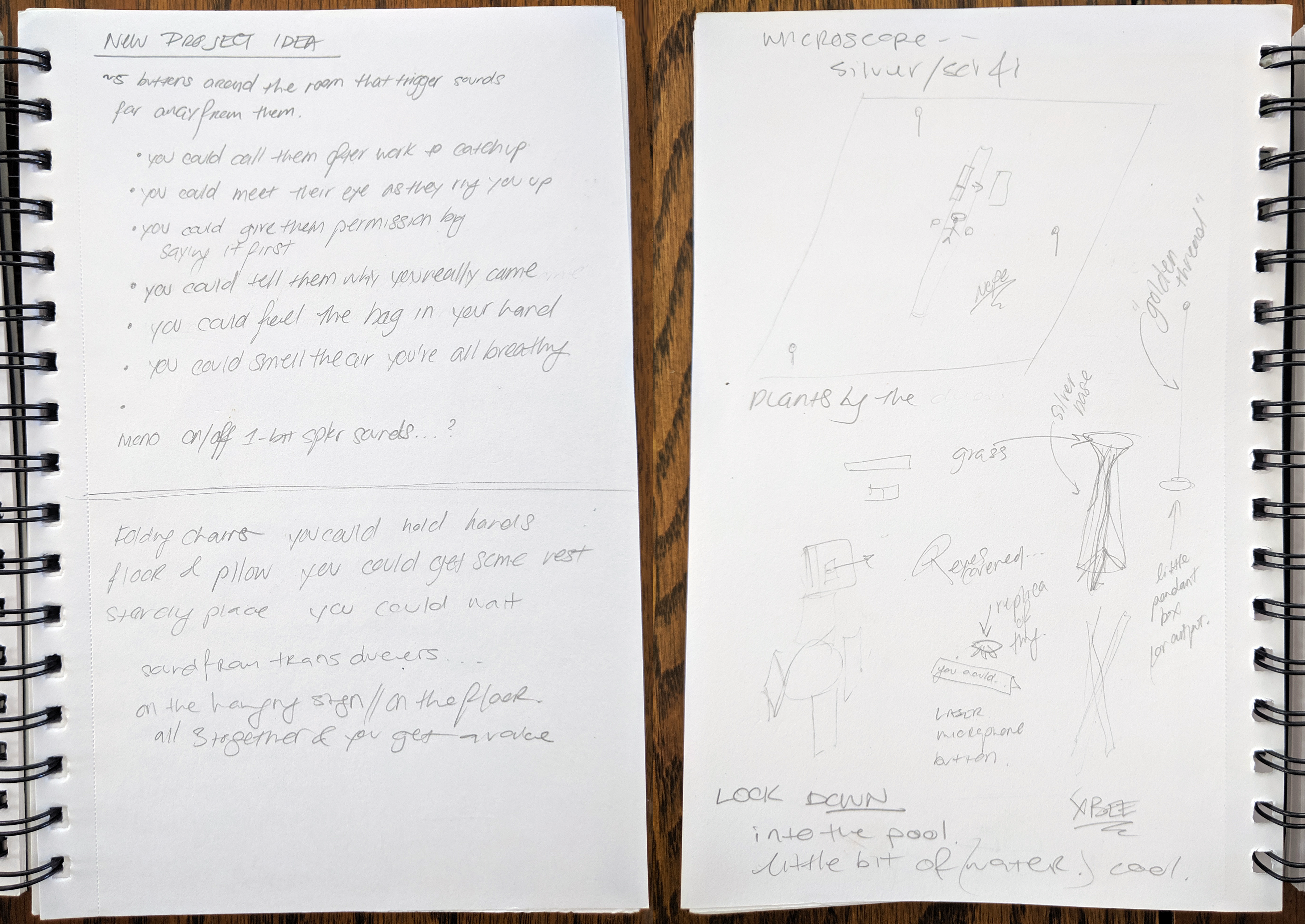 Armed with this functional plan, I got to work. I built the stools with bandsaw and router, cut out the speakers with a mitering tablesaw, and used a CNC router to make the arcs to frame the bed. 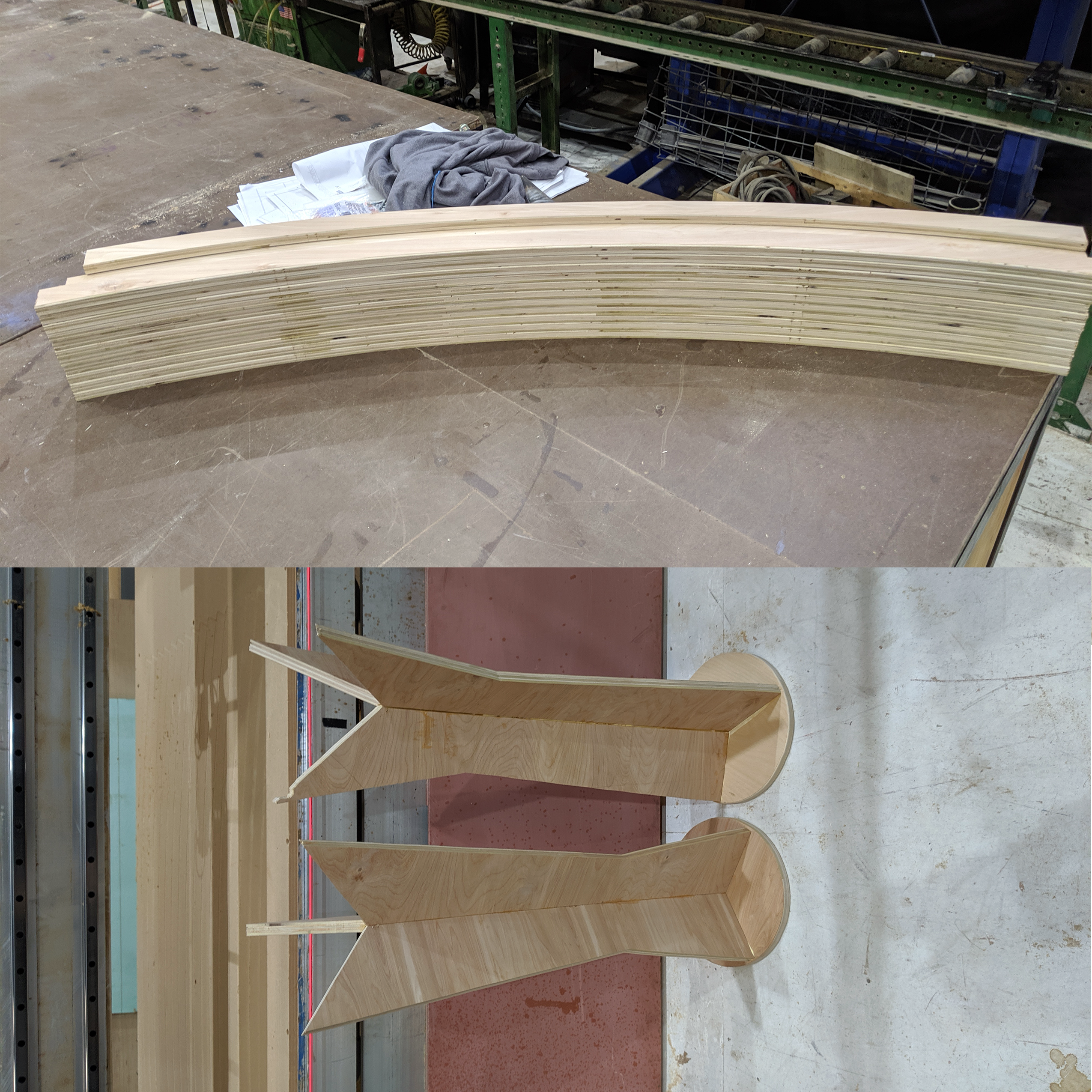 This might shock you, but it turns out that having a robot cut plywood for you is easier than cutting it yourself. I ended up adopting a few edits to the design for the handmade pieces along the way as I ran into trouble with hand fabrication. For example, the speakers were initially planned to have a pyramidal shape. Lacking the expertise to make extremely acute bevel cuts in 1/4″ plywood, I ended up going for a cube design. It took some sanding to get the glue stains off, but it more or less worked. I stuffed the boxes with fluff and put a knot in the internal cable for strain relief, and the speakers sounded OK and could hang on their own weight. 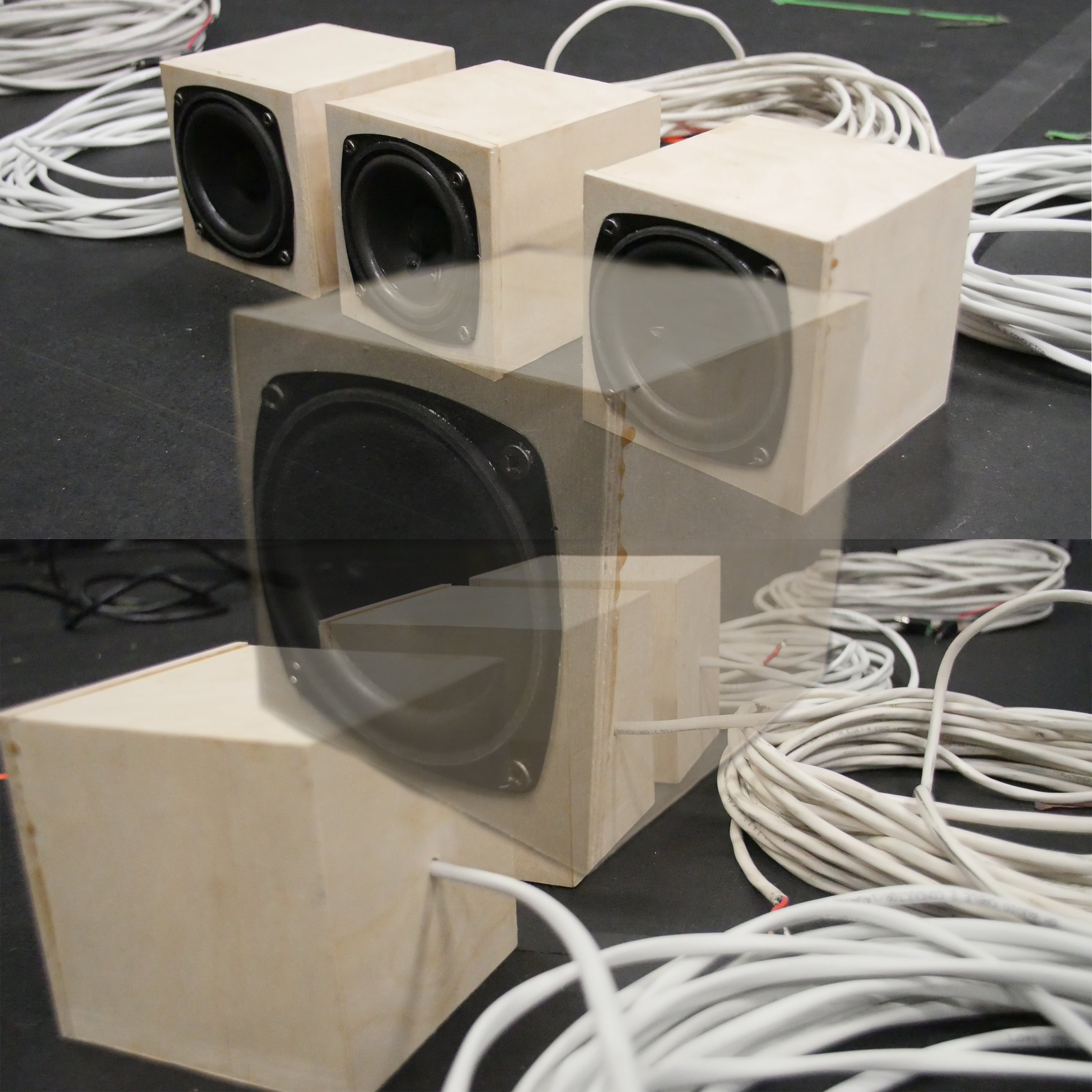 Design for the stool legs and the initial, more complex speaker shape (and driver layout) is below. The simpler driver layout meant I didn’t get a true full-range output– maybe a filter above 5k or so– but for the bell sounds, it wasn’t a serious problem for sound quality. 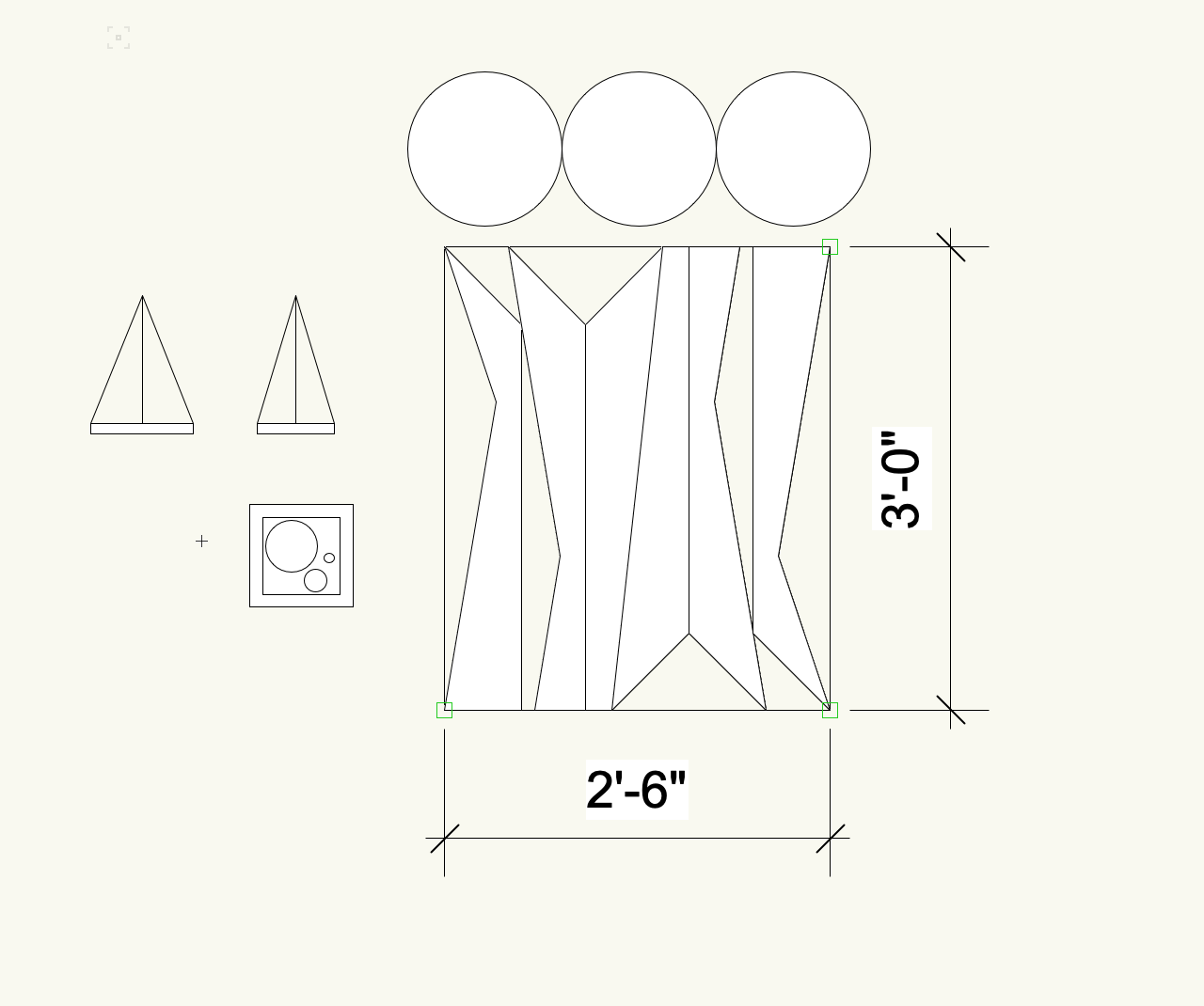 In order to have the simple logic switches on the stools trigger complicated sounds, I decided to use standard theater show control software, and use an arduino as just a trigger machine– like a drum pad on a MIDI controller. The arduino sent particular char values to a computer over the serial port when various logic conditions were met. I made a patch in Max/MSP to interpret the serial data and turn it into MIDI commands, which I then sent to QLab, the industry standard theater-sound program. In QLab, I could level and layer sound, and add effects like reverb to particular bits of audio that needed to be “smoothed out”. Everything needed to be smoothed out. 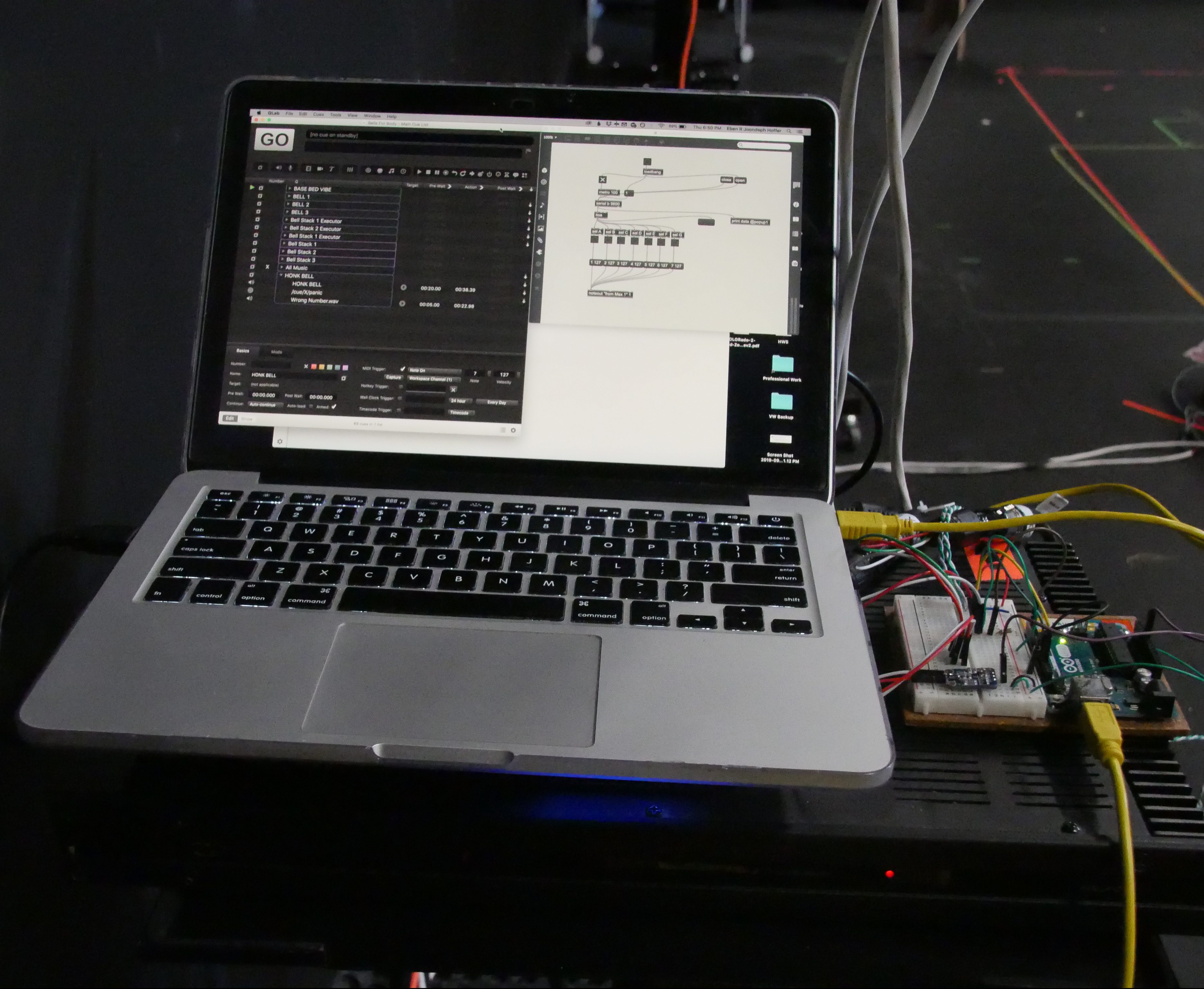 Another issue: this computer setup is ugly! It needed to be hidden somewhere far, far away. Initially, I thought it would be a good idea to use radio to make the stools wireless and able to go far afield. Instead, as I ran out of time, I noticed that our studio has a lot of XLR cables– so I made all the stools have XLR terminations, so I could use the existing cable to run them, wired, up to fifty feet away. This took some trial and error, as the inevitable impedance drop on the long cable messed up some of the more fragile voltages… For the microphone, I found that the amplifier chip had to be on the computer side of the cable run, or else the XLR wouldn’t properly carry its power supply. Ah well. 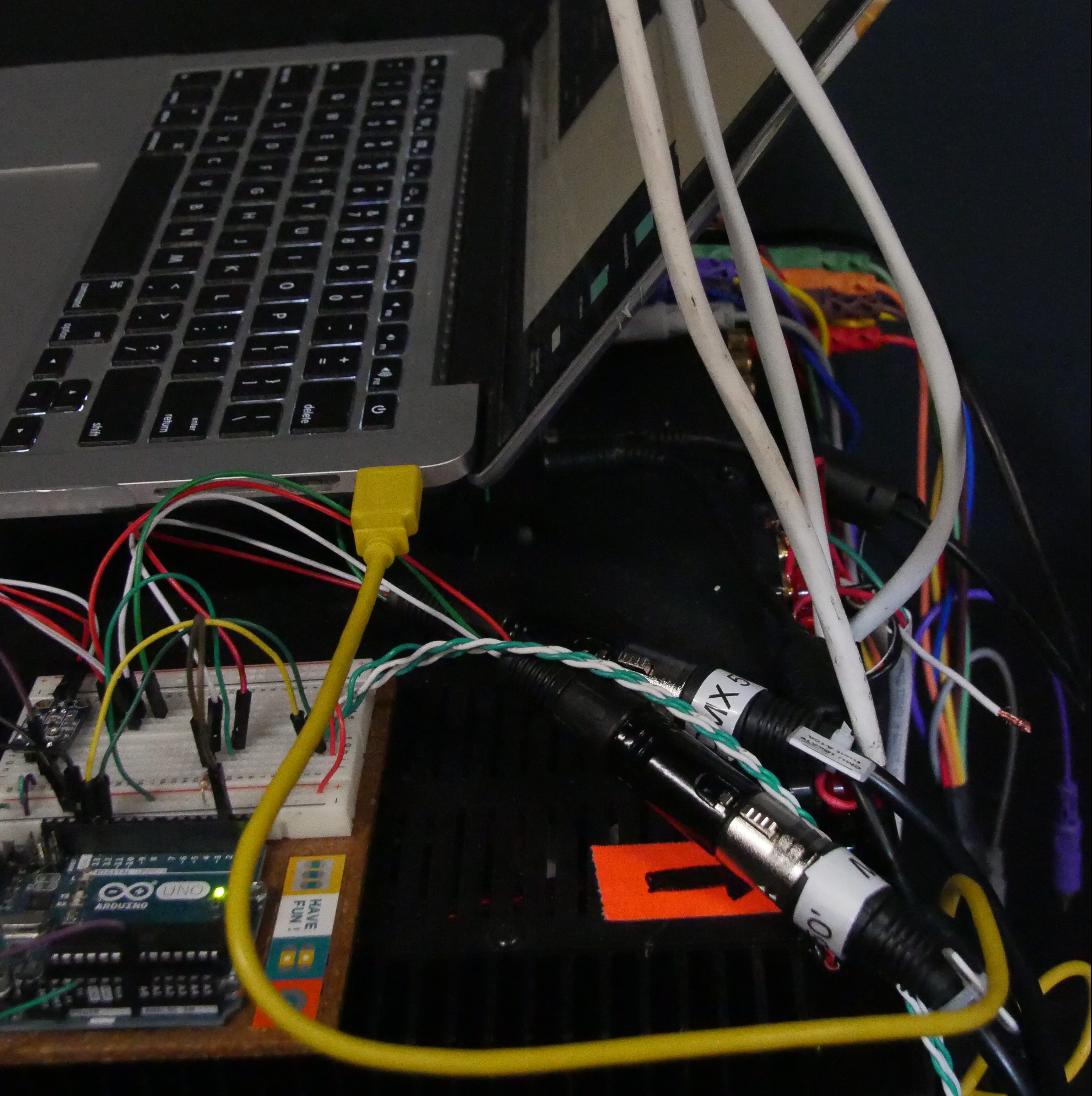 I used a MOTU USB sound card an a six-channel restaurant power amplifier to get sound around to all the speakers– including to the four speakers down in the bed. That’s three channels: left and right for the ears, and one subwoofer channel split to two speakers, one under the pillow and one under the participant’s right hand (covered with grass of course). 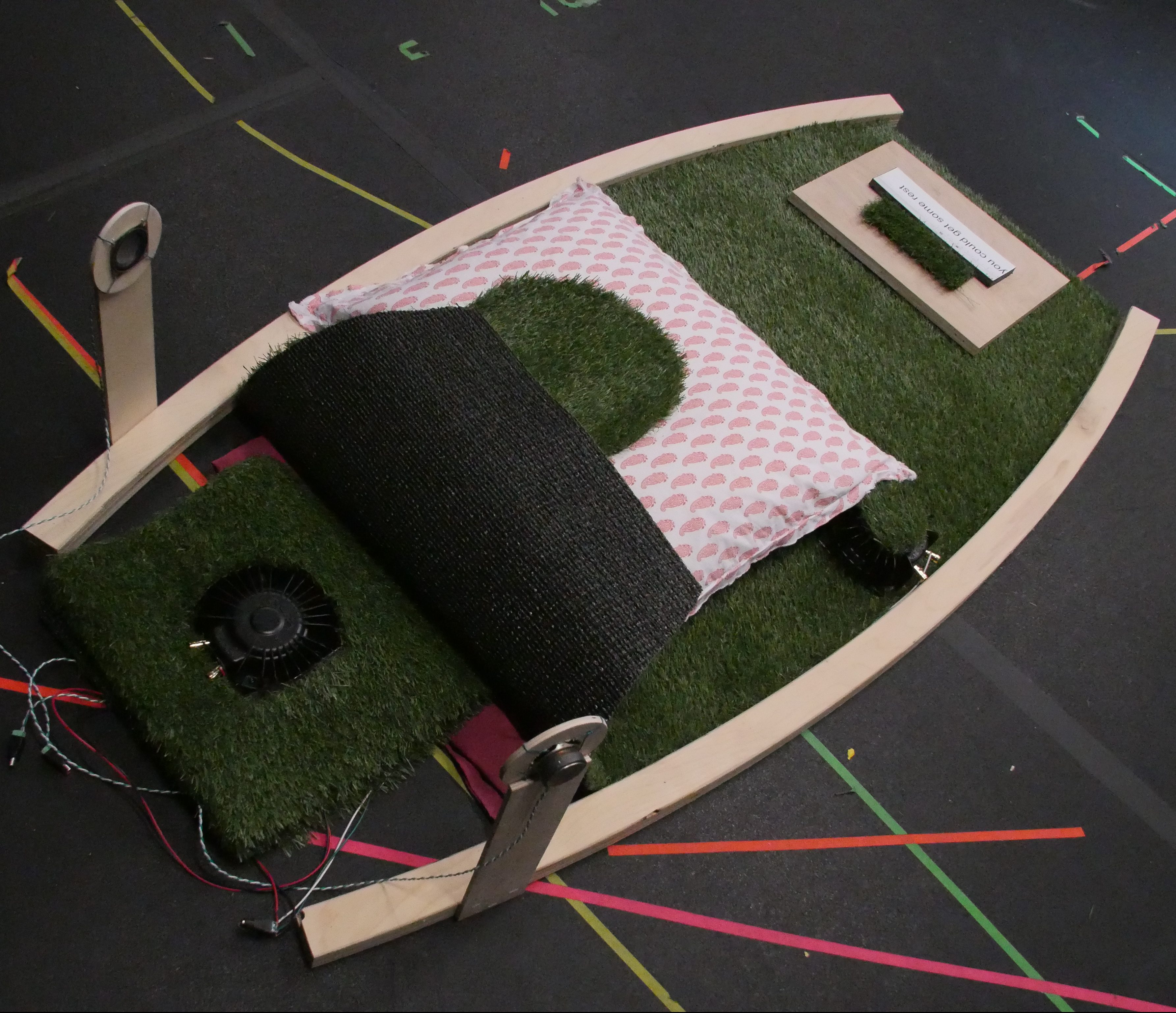 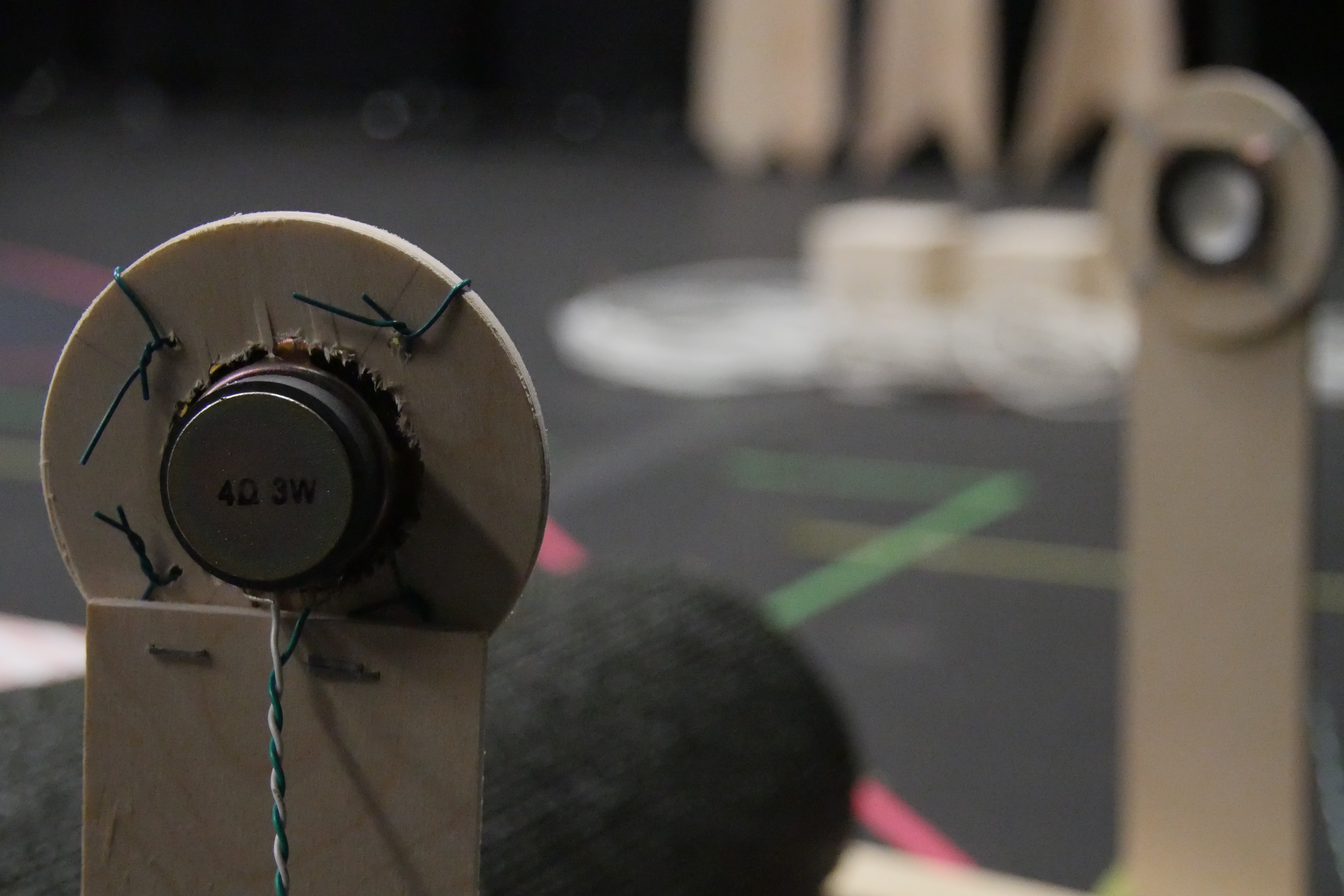 The specific rigging and placement for these speakers came from a lot of trial and error! I initially expected the subwoofers to be able to resonate the floor under the bed, but in a concrete basement gallery, this turned out to be wishful thinking. I found that a subwoofer under the head was most effective at making the whole body feel like it was being shaken; but in order to keep it from being overwhelming, I buried it inside extra grass under the pillow. The ultimate effect was that participants thought the hand buzzer was the only one that was active, while still having an immersive full-body experience.

And as for the triggered music, it sounds like this when it’s all playing:

And this is the secret message:

With a microphone –> electret preamplifier; phone –> basic switch; and mirror –> ultrasonic rangefinder for when the “veil” is drawn back. 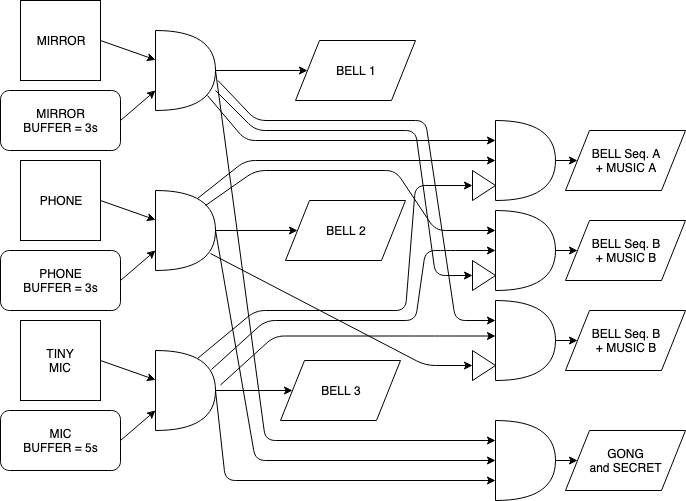 Logic diagram for the monstrosity 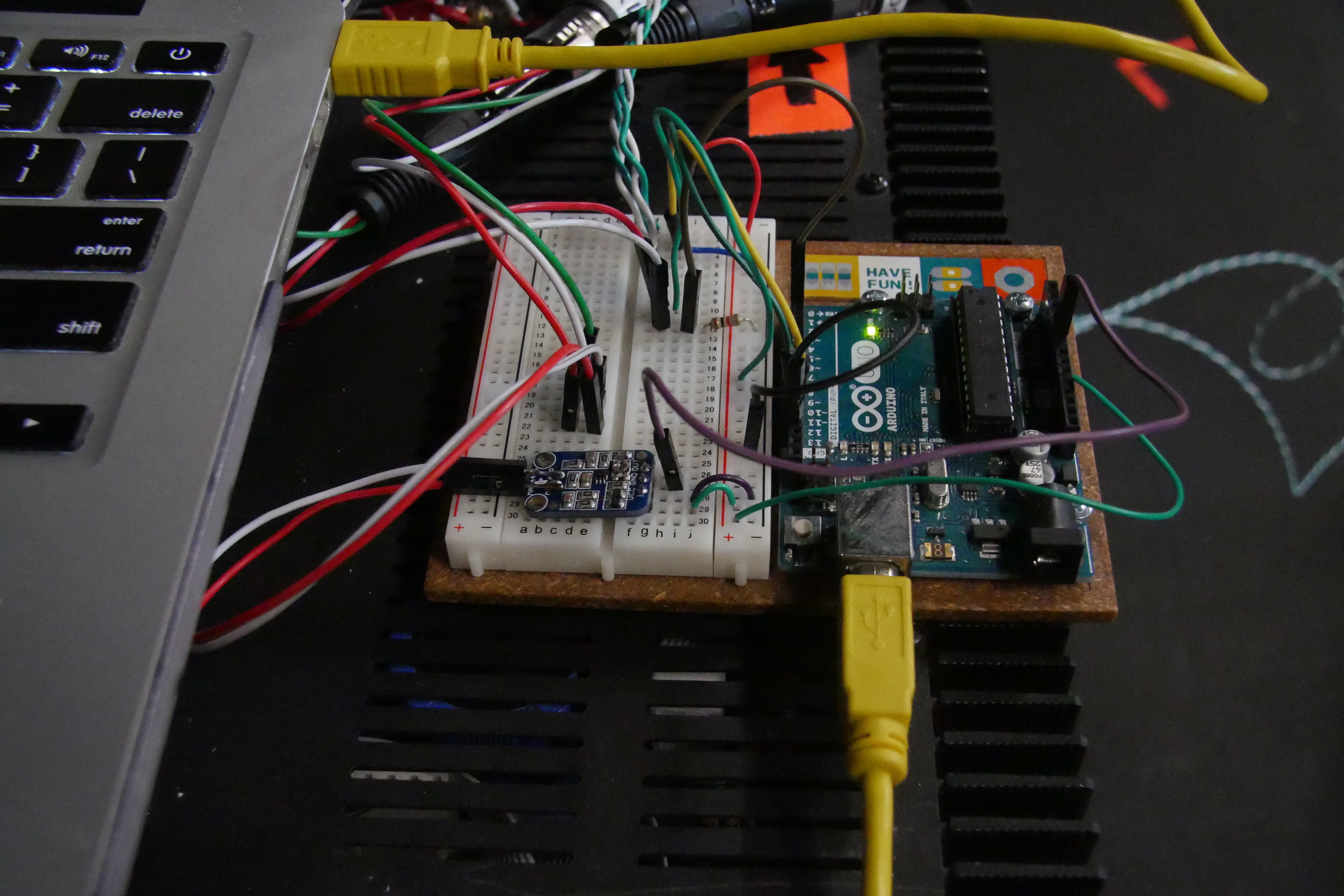 arduino – at least how it looks

For the arduino, it’s pretty simple: there are three inputs, on pins of your choosing. All outputs are via Serial back to the computer.