Project No. 1: THIS IS MY SON / PLEASE HELP HIM BREATHE

THIS IS MY SON / PLEASE HELP HIM BREATHE 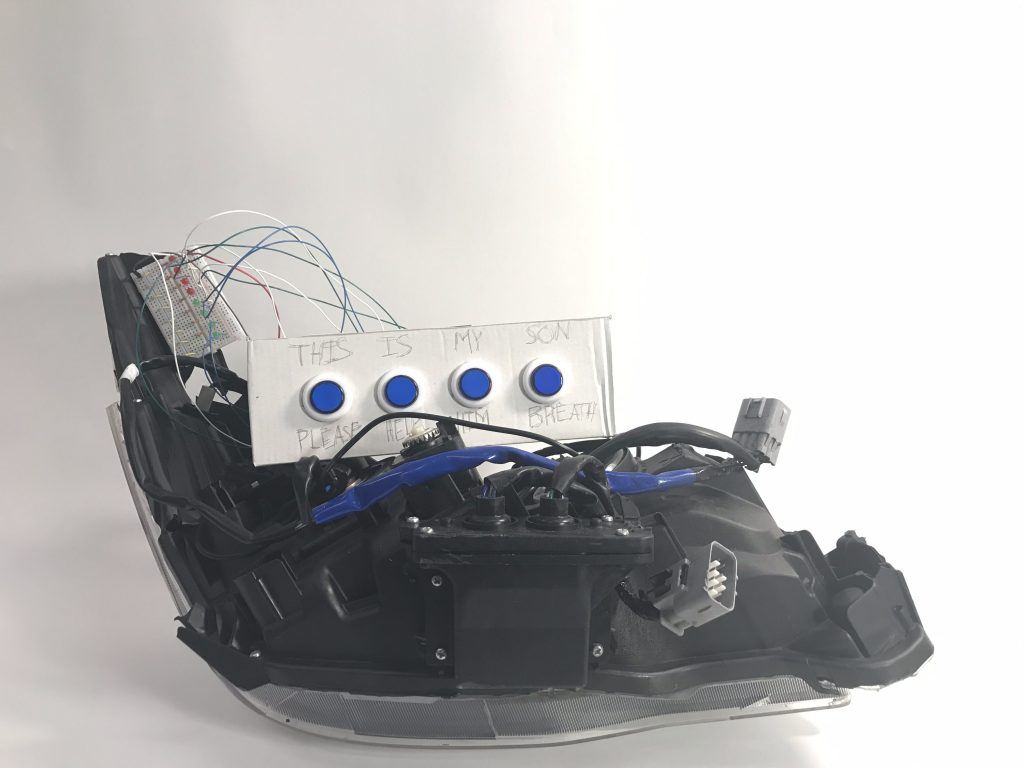 THIS IS MY SON / PLEASE HELP HIM BREATHE – electronics, cardboard, car headlight (2019)

I am standing in a room with you. In my arms, I am holding this car headlight, the size of a baby. You can see the inside, though, which is full of rough, sharp edges of broken plastic and wires. At where the head of a baby would be is a board with eight lights, four red and four green. The red lights are on, and the green are off. 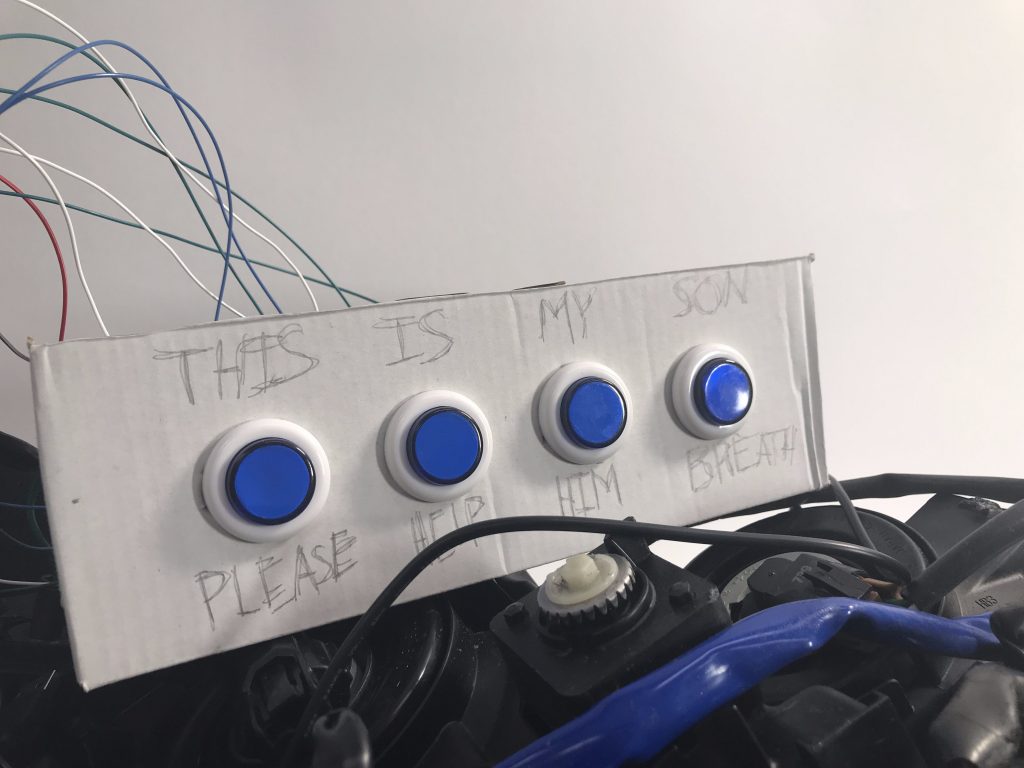 Close up of the interface. Box made of a leftover sustain pedal shipping box. 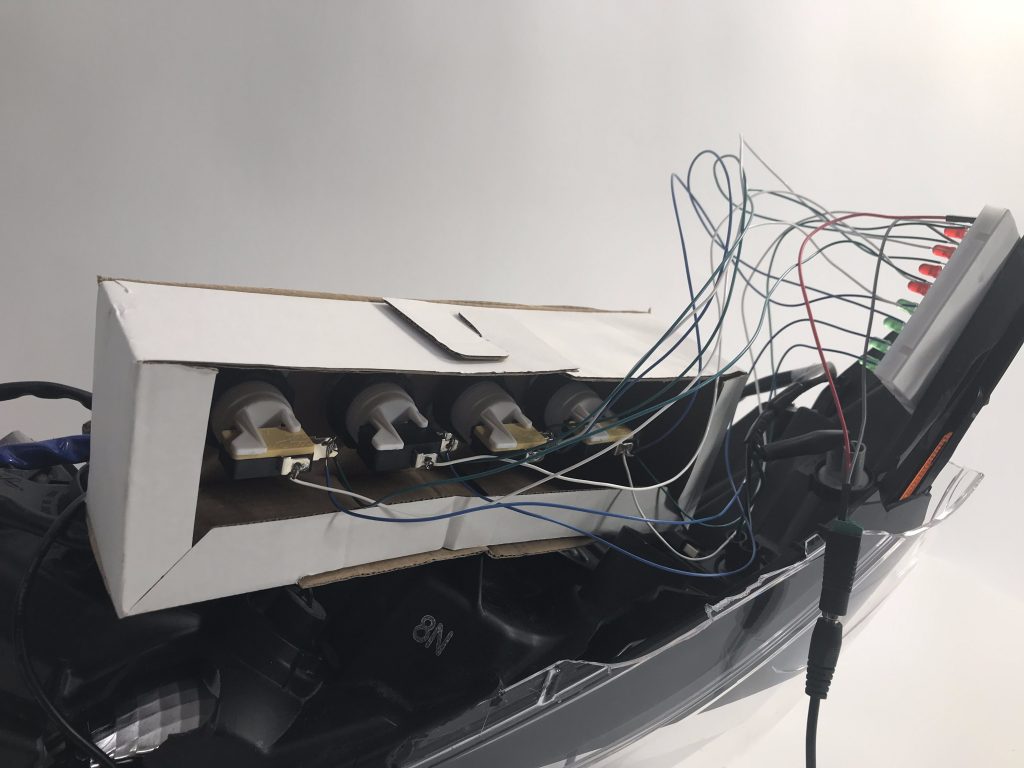 Each button is operated by a two-state switch. 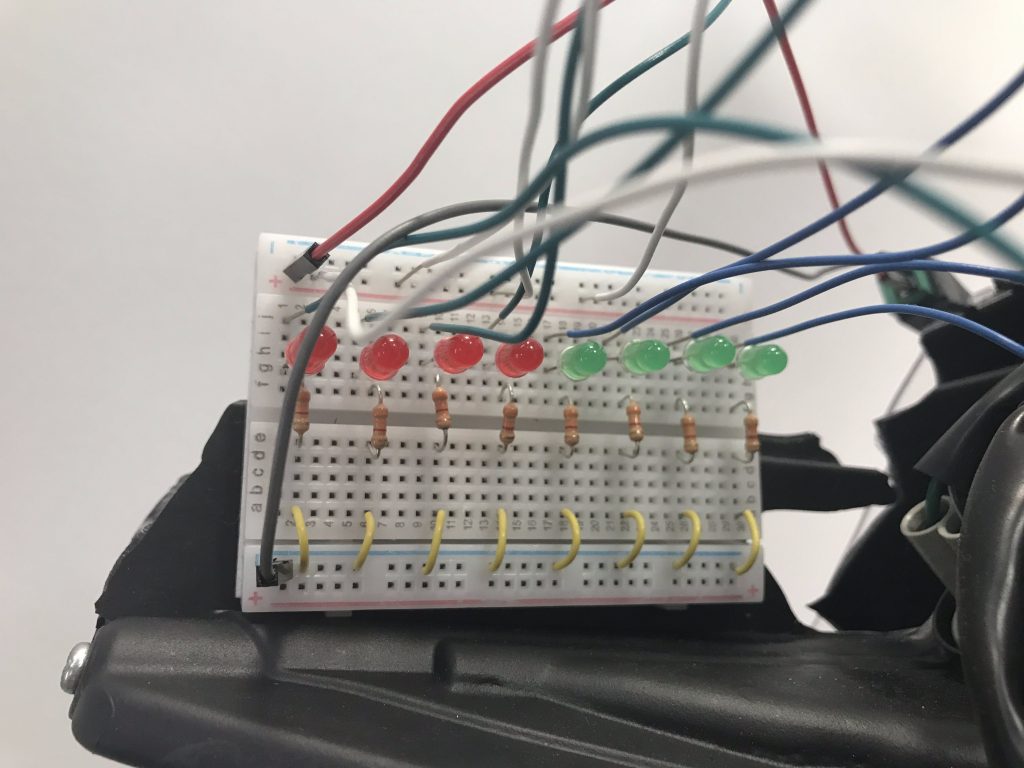 Where the action happens. Power is ran into a USB block. 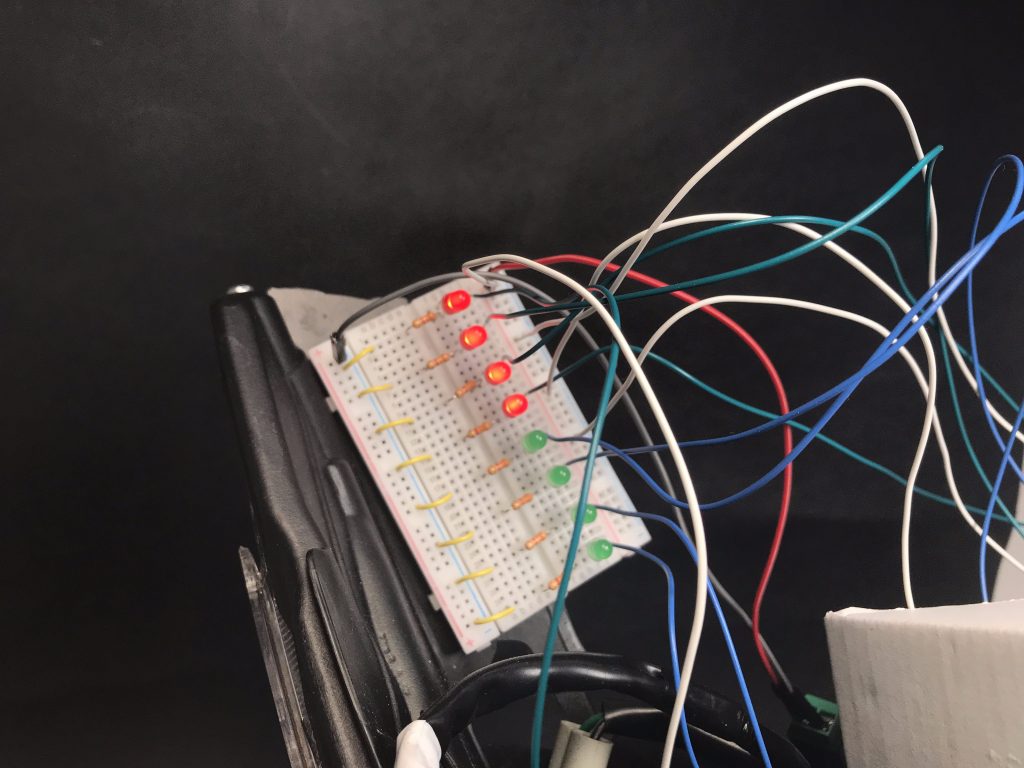 Inactive state when powered on. 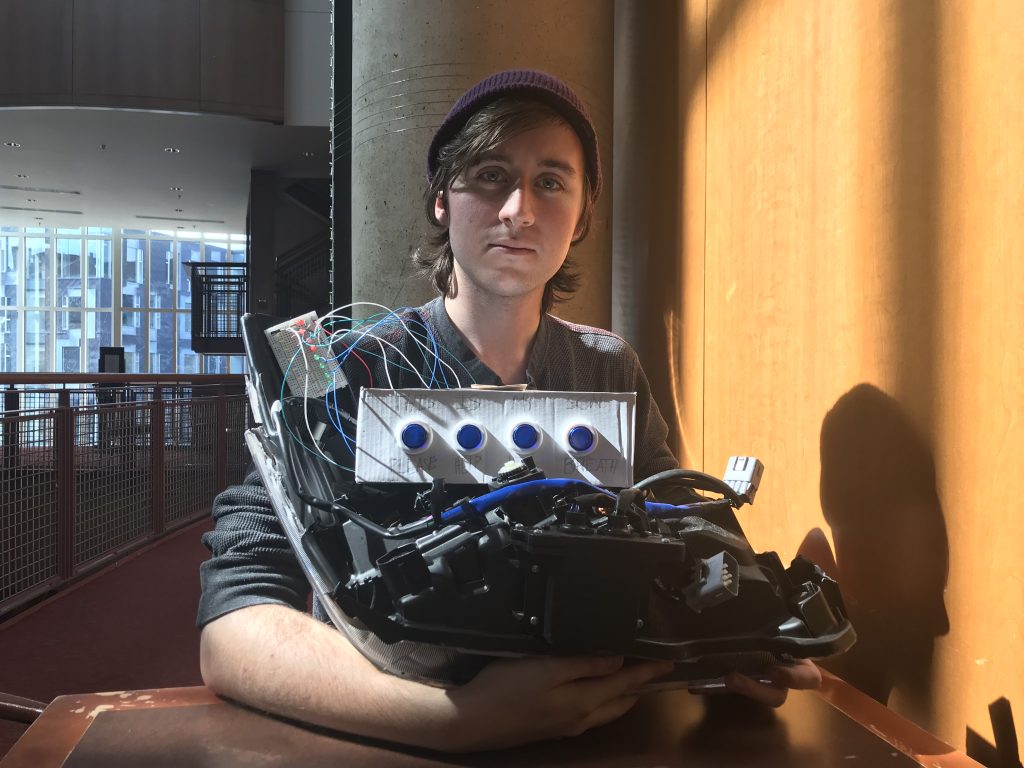 Ho boy, what a process.

I don’t believe I began this project with the intention of making it easy for me. Perhaps it was all in the excitement of ideation that, in a way, the world seemed wide open for me to utilize it at its fullest. And then, of course, I realized I had a far smaller understanding of electricity than I initially considered, already acknowledging it was small to begin with. This coming to terms happened several times throughout the project, and in the midst of several other large scale projects that I was involved with, I found myself constantly having to distill what I wanted to do down to something more manageable for my mental state. 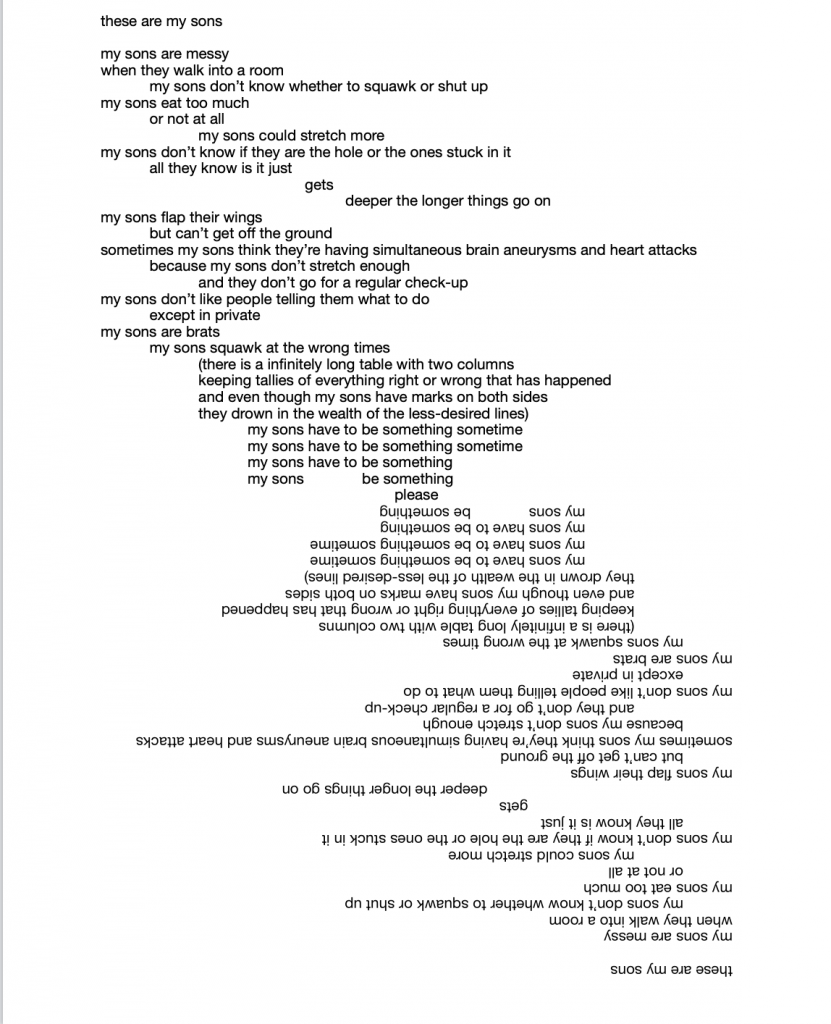 Poem written as the background for a mural, alternative medium for this piece.

This essentializing allowed me to explore different possible mediums in an effort to come up with a project that could actually exist in the world. One of the more… adventurous included creating a mural out of the found materials I had been gathering up to this point, with a poem that I had written on the spur of the moment. In a sense, this allowed me to realize a version of the piece that laid everything out on the table, and in turn liberated me in the rebound as I created the more concise, slightly-more-sophisticated end product. As I work with technology and materials that I couldn’t be more unfamiliar with if I tried, I hope to utilize a similar way of thinking earlier on in the process to give myself more time on a path I can commit myself to, rather than trashing concepts within a few days and despairing.

On a more positive note, I did find a love of mapping out the wiring onto the breadboard with this project. With the time I had, making all of the connections neater and compact ended up becoming wildly satisfying, and I hope to take that further in the next project I work on. In the same vein, however, I hope to utilize more of my software experience as well; initially, I was hesitant to create something that utilized my laptop, but it is becoming more and more clear that the ideas I want to execute will necessitate it in some way, shape, or form. 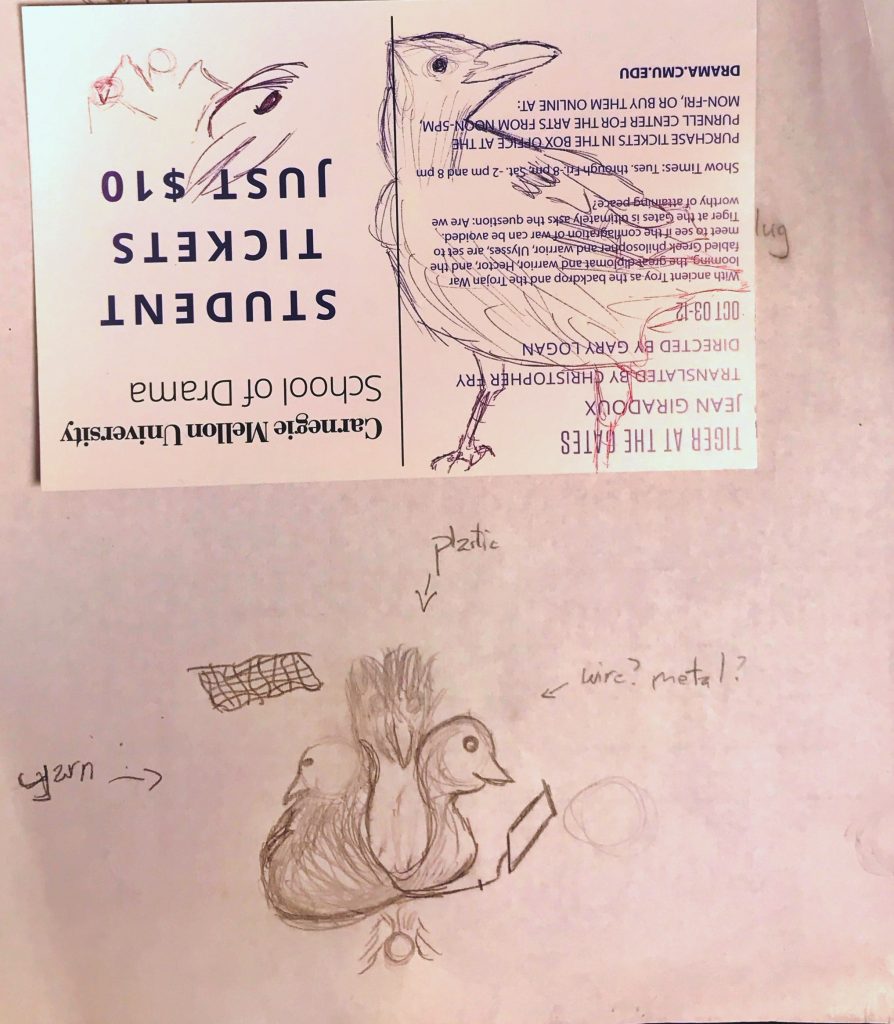 Initial sketches, ideating on bird form. The lower drawing was an idea for a Cerberus-like sculpture. 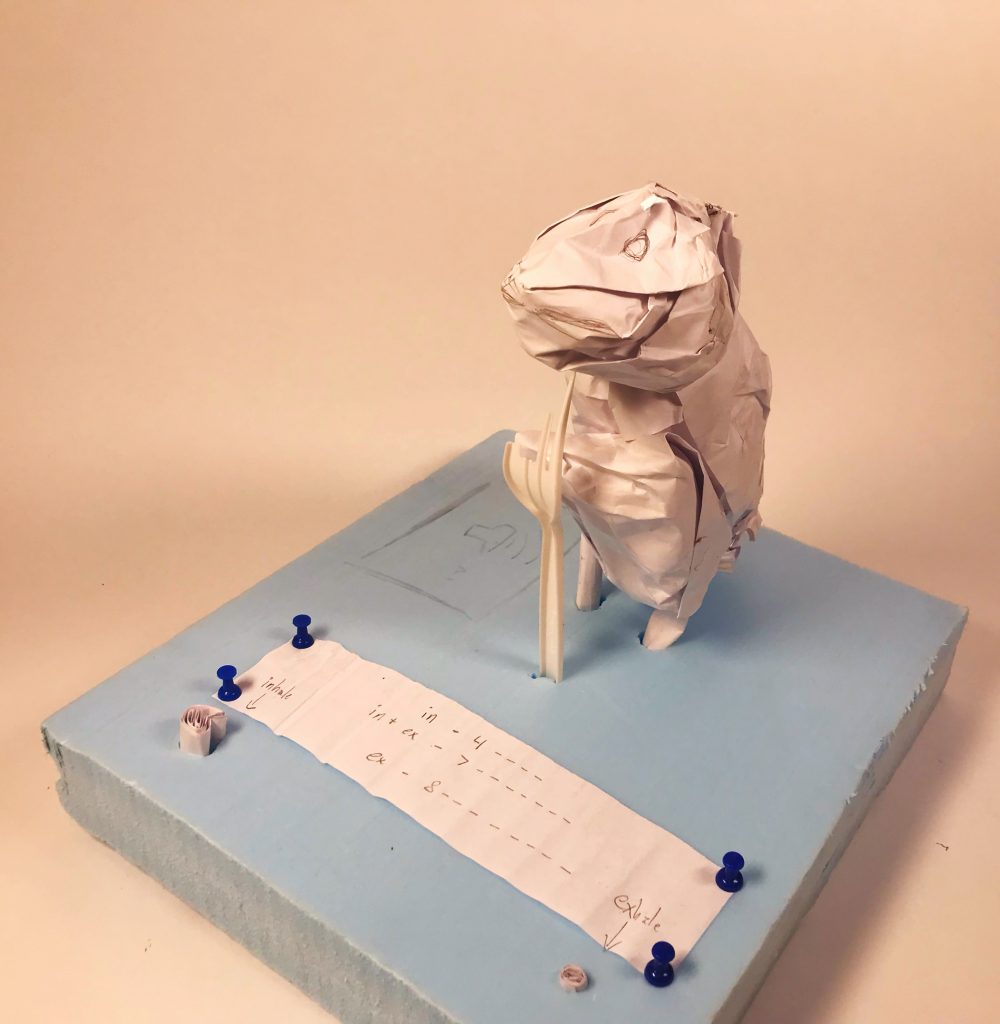 Maquette for the initial form of the bird.