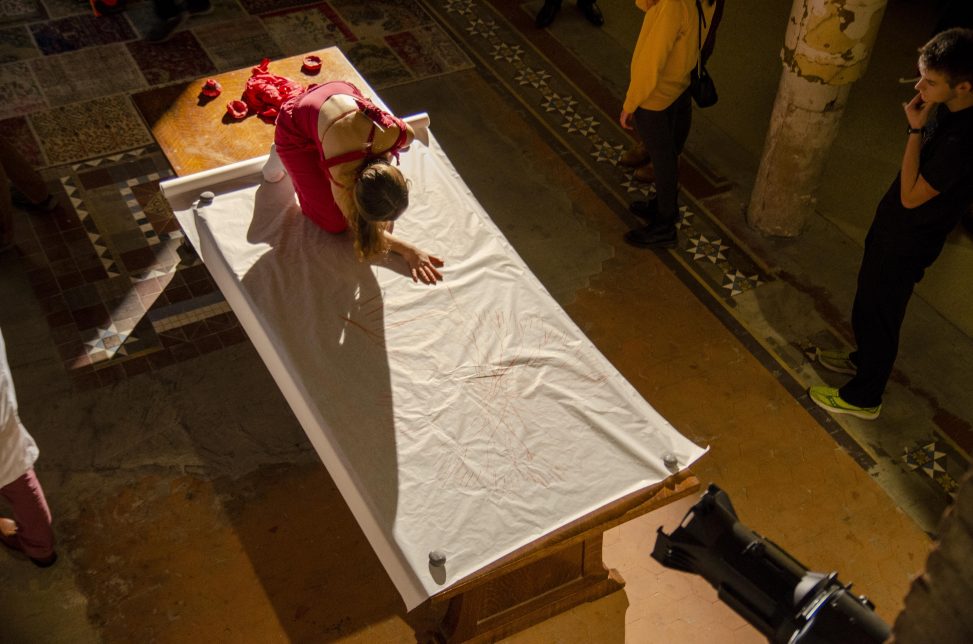 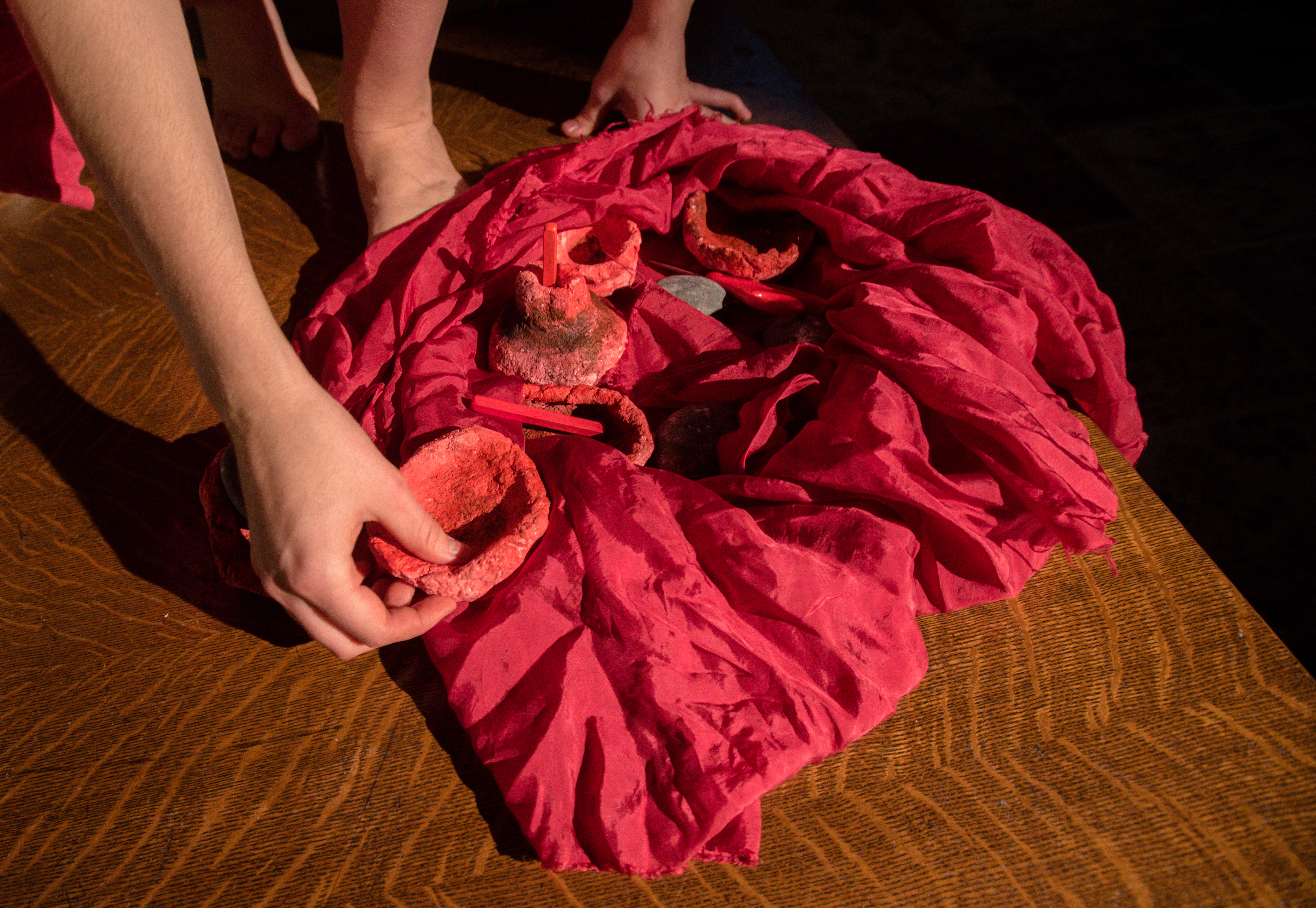 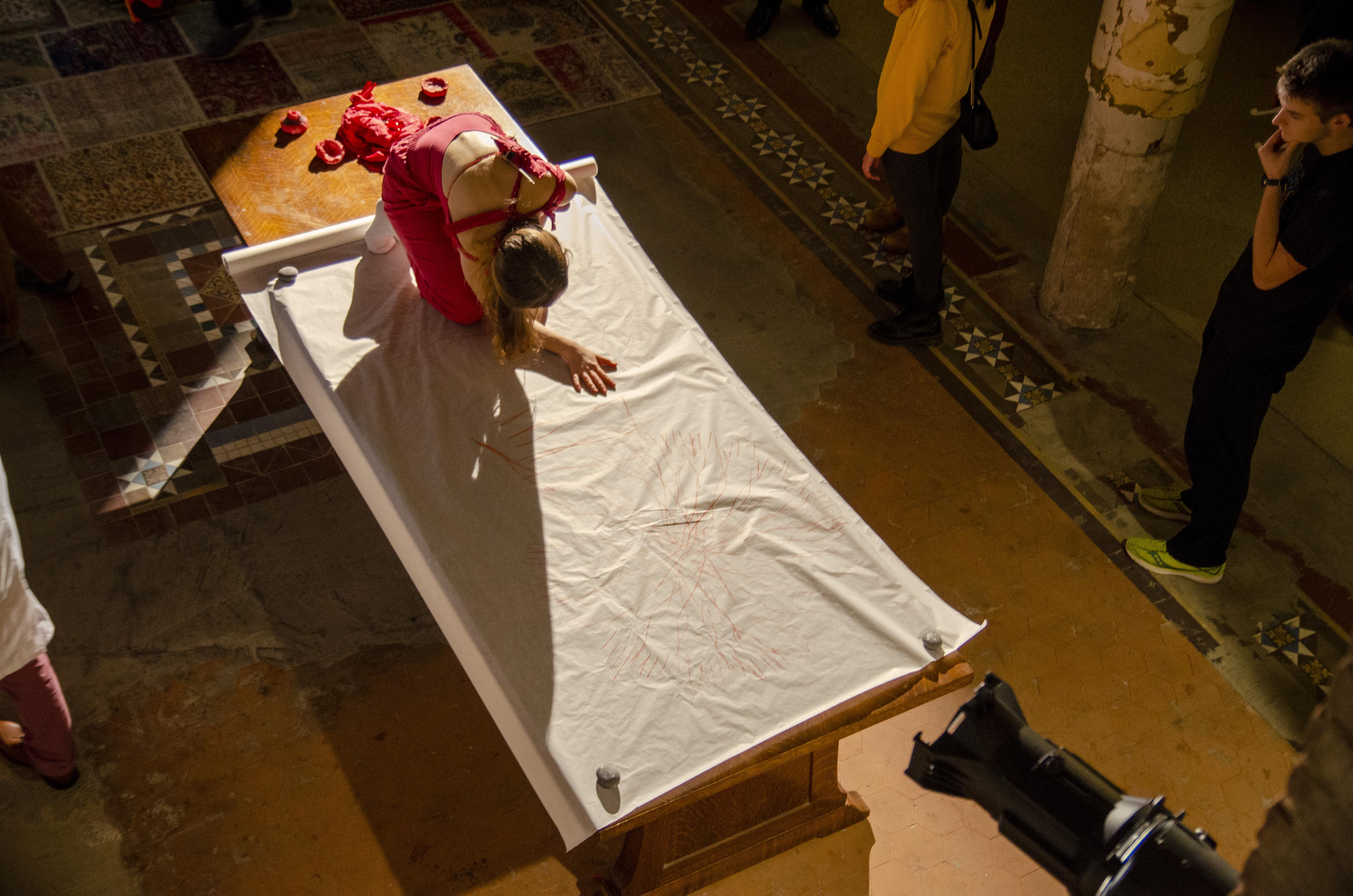 as seen from above, performing on table (photo by Christina Brown) 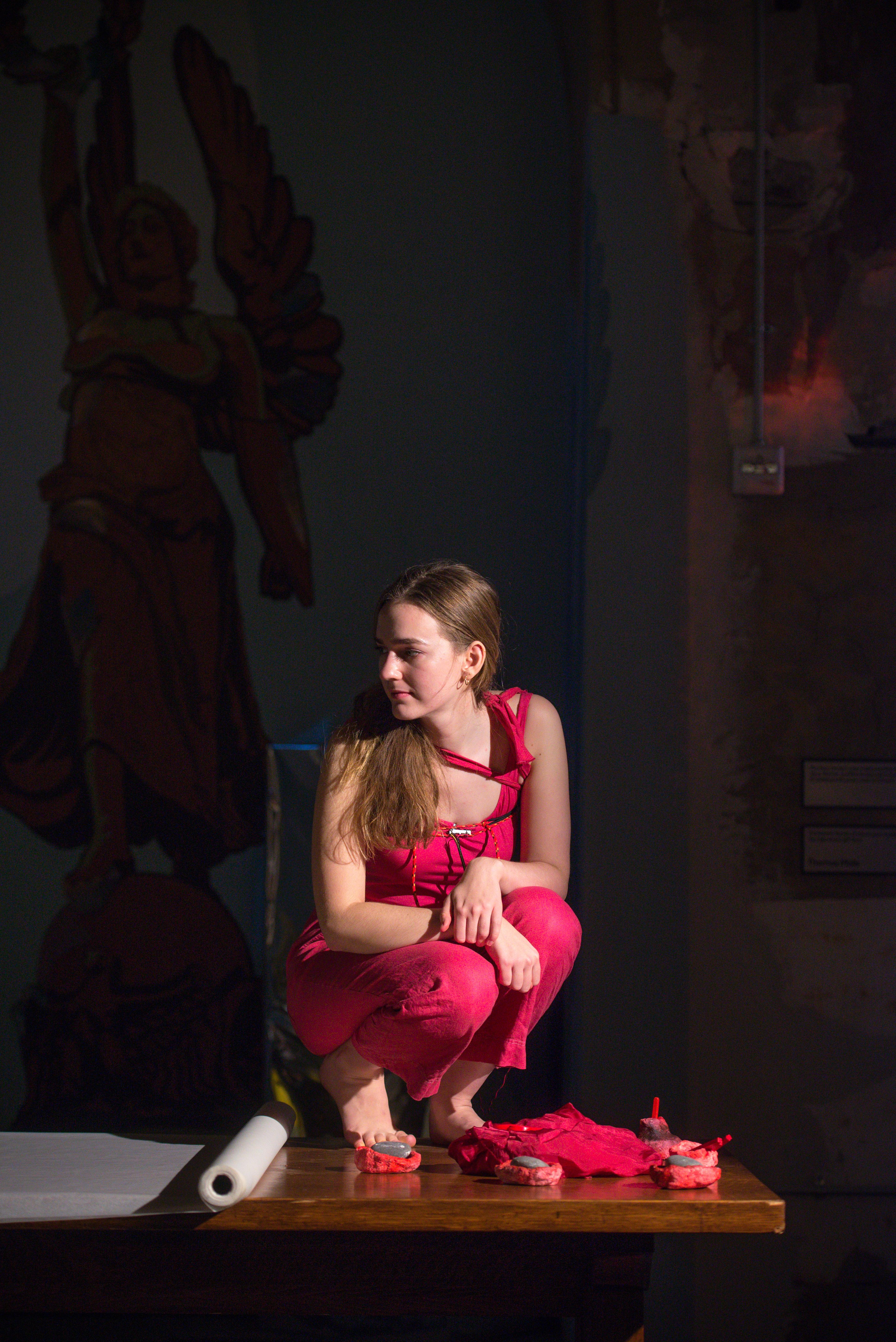 at the beginning of the performance (photo by Sally Maxson) 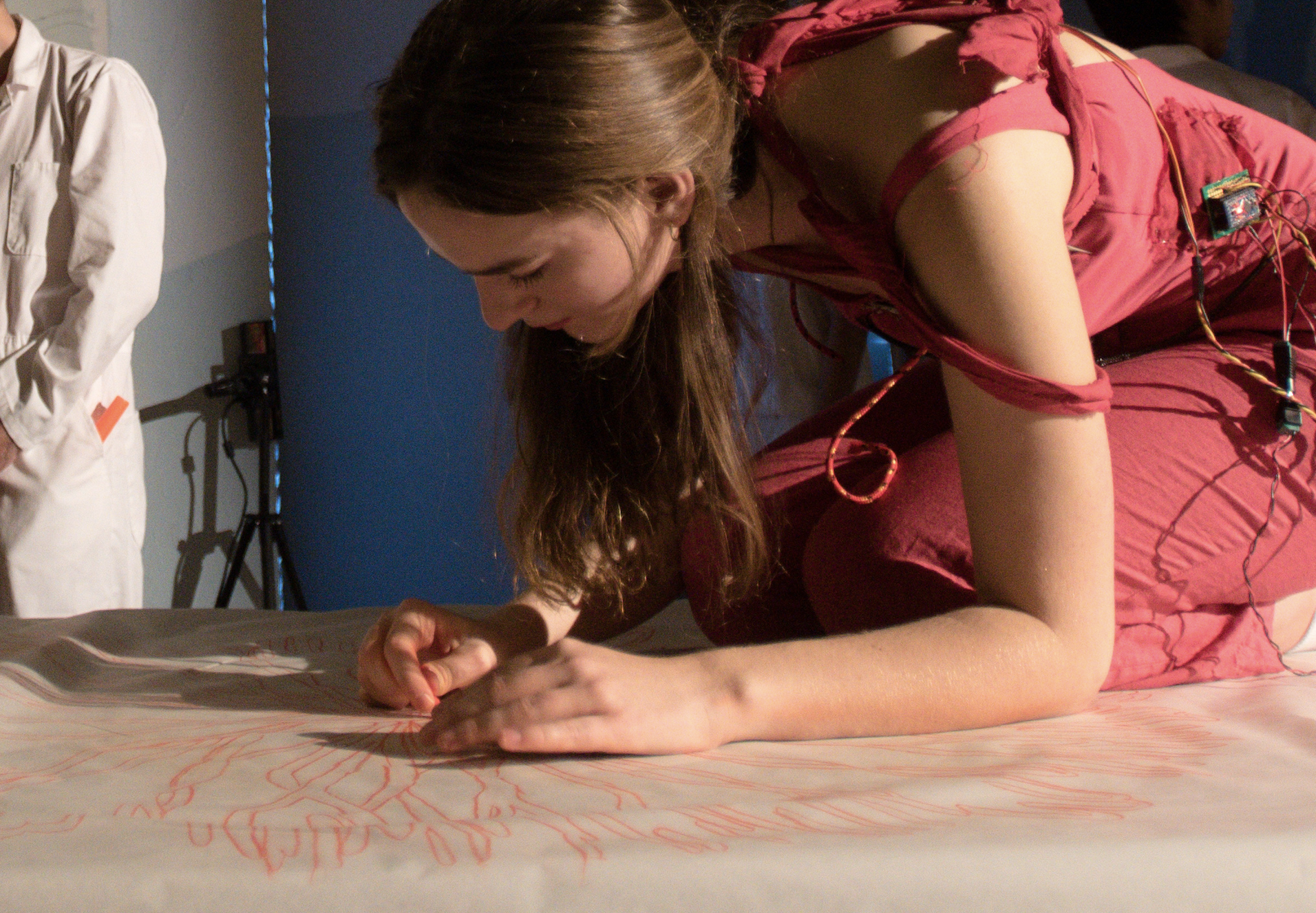 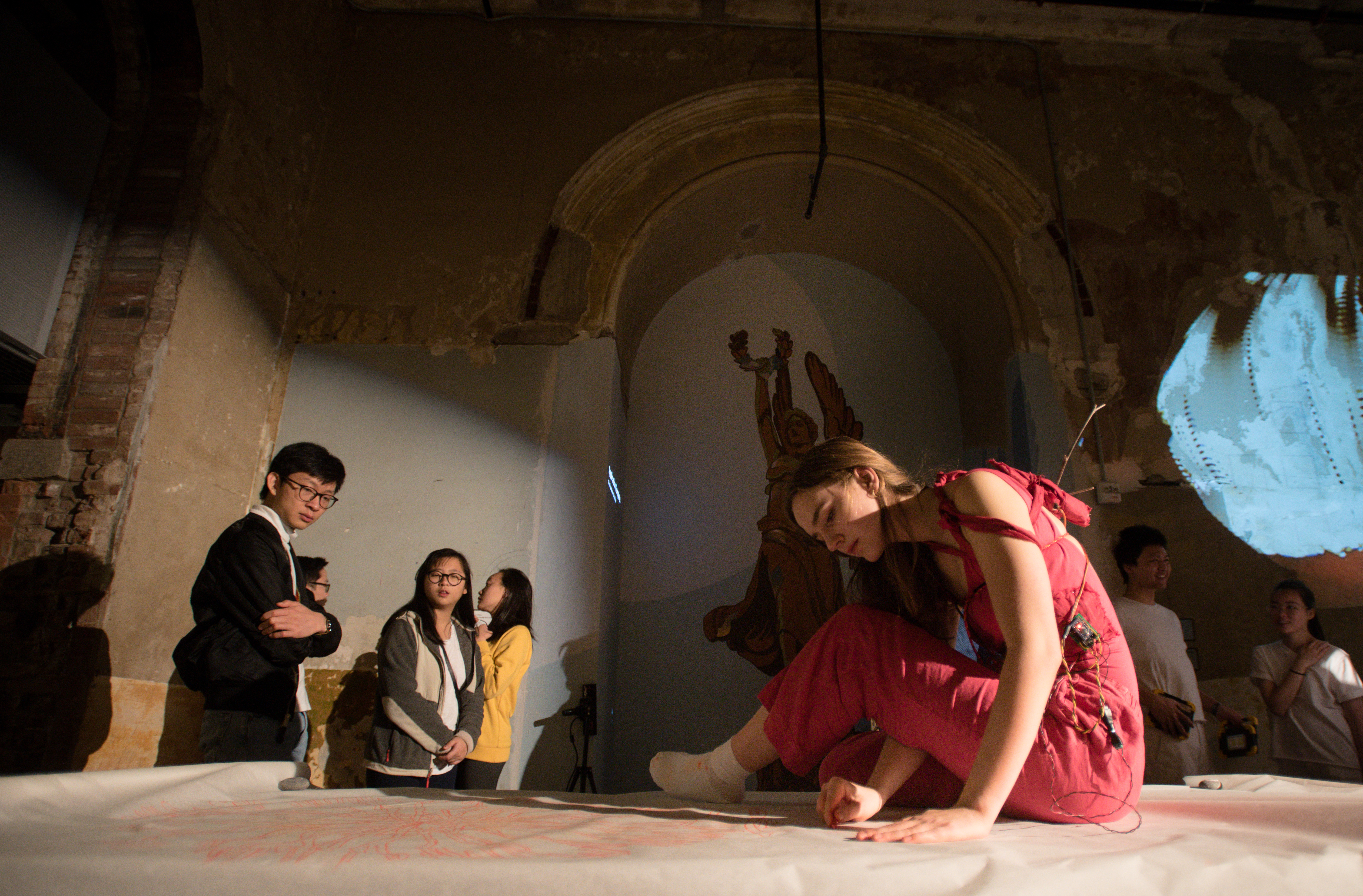 drawing and being tapped on the shoulder by stick, by breath (photo by Christina Brown) 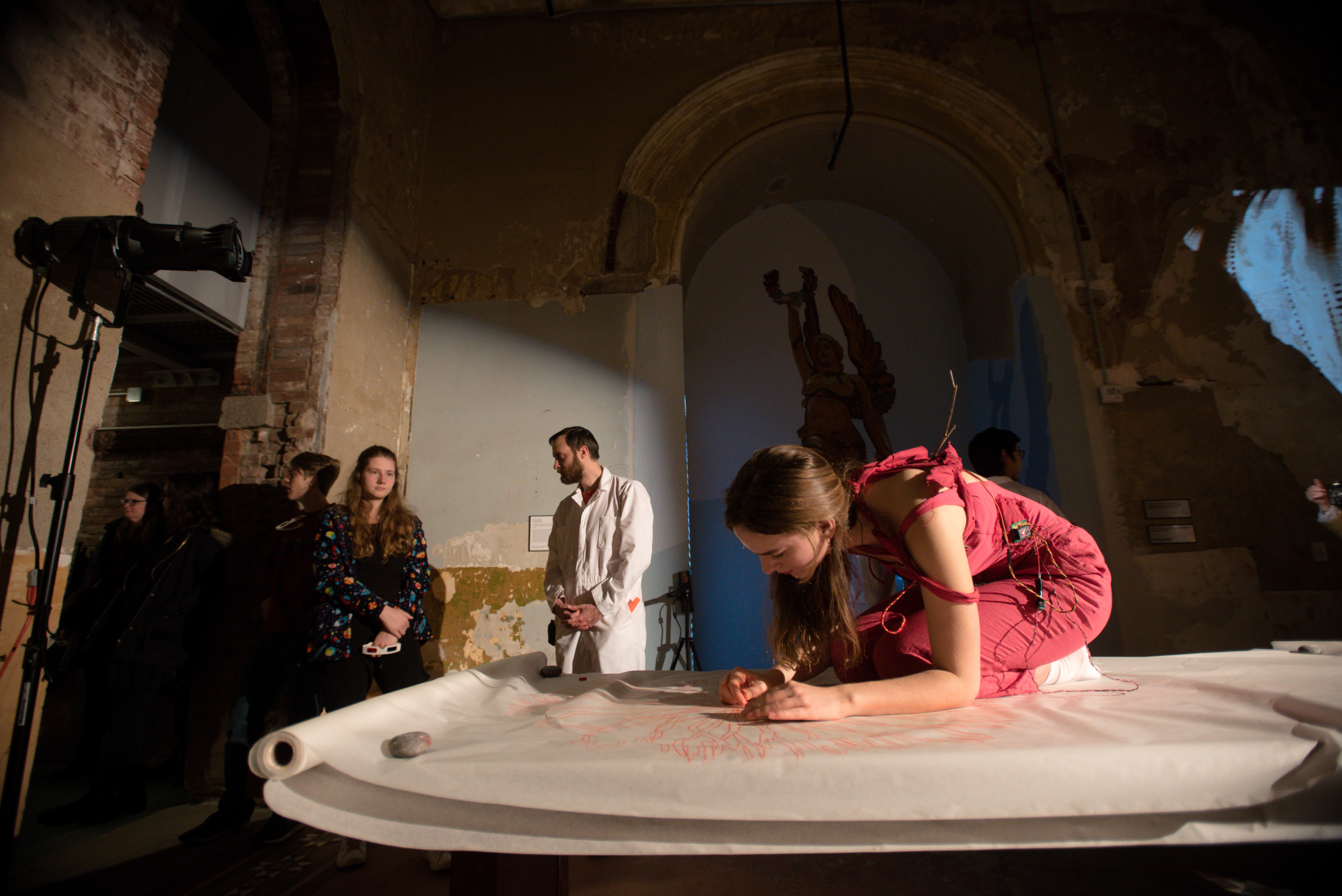 video documentation above (thank you, Jacquelyn Johnson for the footage)

In this piece, I have a device on my body the measures the amount my chest expands as I breathe. This device then triggers the motion of a motor on my back, which moves a twig forward and back. This motion gently taps me, and reminds me of my body continuously.

With this awareness of the body, I map myself, by tracing my outlines on a transparent paper that crinkles as I walk on it. I make a unified portrait of myself, partially by draw the outline of my left hand to my elbow and create a circle, rotating my body as I do so.

After I finish this first iteration of my personal map, I then create one other, taking the roll of transparent paper and folding it over on itself for a new canvas.

On this new map I can see the ghost of my last drawing. In my next mapping, I trace the outlines of the first map. The memory of its previous state is embedded within its very structure. The drawing process moves forward by referencing its previous state.

When thinking about the theme arrows, I was struck by the poetry that abstraction enables computers to perform their every task.  As Zach explained even more beautifully in the class lecture he gave, there are many, many levels of abstraction that convert the instruction “move this motor to the right 90 degrees” to the binary language computers can understand, much like a Russian doll set is a series of containers containing containers.

I began to compile relevant research on the topic here. I was especially interested in how abstraction is a concept relevant in many disciplines, that this conversion between one category to another for the movement of information is so pervasive. I was interested in the way we abstraction a self by the way we narrate our life stories.  And how the beginning of a subjective self might start the moment we recognize our bodies.

Somewhere in my research I came upon the idea of recursion in computer programming. I found it interesting that there was a kind of emergent complexity that existed within a function calling itself; that complex growth structures like fractals could be visualized or complex problems could be solved by the simple process of self-referencing “a smaller instance of that problem”, as the wikipedia page writes.

Recursion felt very connected to my interest in the abstraction of identity formation. I knew I wanted to connect them somehow within a performance.

It was difficult to figure out initially what a recursive drawing might look like (at first, my idea was to make rubbings of fragments of my body, but I realized this action, while it may relate to construction of identity, does not relate to recursion) (I am thankful for my dear friend Jacob Tate for helping me initially realize this). I struggled to know too, how I wanted to trace myself – what is the conceptual difference between trying to draw my entire outline and trying to draw several parts of myself repeatedly in order to create a unified image?

It was also interesting to think about how each performative action would unfold, and how my costume could influence the performance, and what significance color could hold in the piece. I am so thankful for Heidi’s help in this, she gave me so references for inspiration and talked me through different ways of performing. I am so grateful for such incredible and kind teachers. 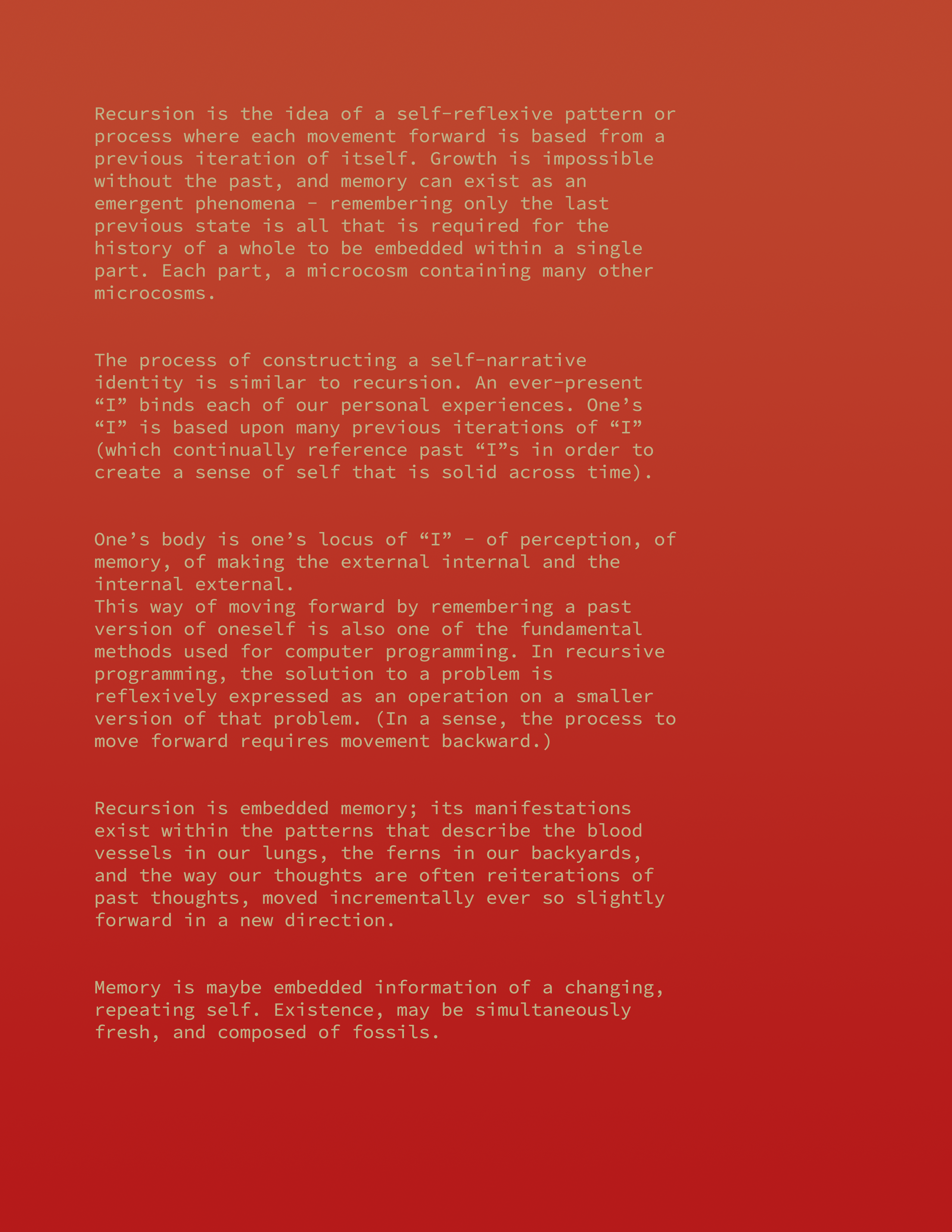 The physical making of the mechanism to measure my breath was a bit of a challenge and required some differing approaches! I am so thankful for Zach in this process.  He had so much patience and and helped me work through the physical mechanism for tracking the expansion of my chest, as well as helping me to convert my project from using a normal sized- Arduino to a mini Arduino which would enable me to perform and be able to move and draw without being to fearful of breaking any wire connections.

In the process of making a mechanism to track my breathe, we experimented with materials that had too much friction (a belt, a scarf) before settling on the red nylon rope.

Drawing out the circuit diagrams were so helpful in the soldering process, and made things move so much more smoothly. 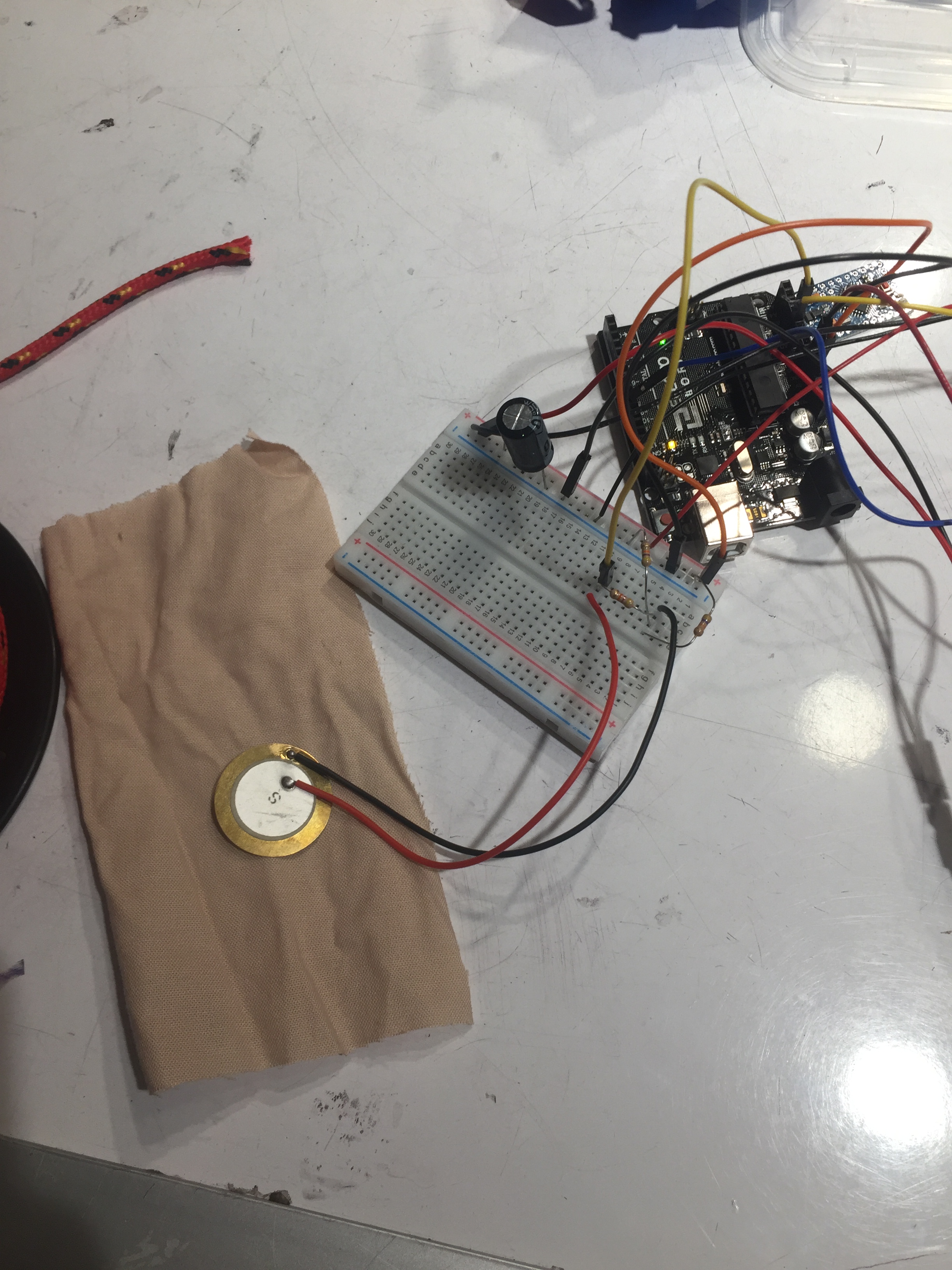 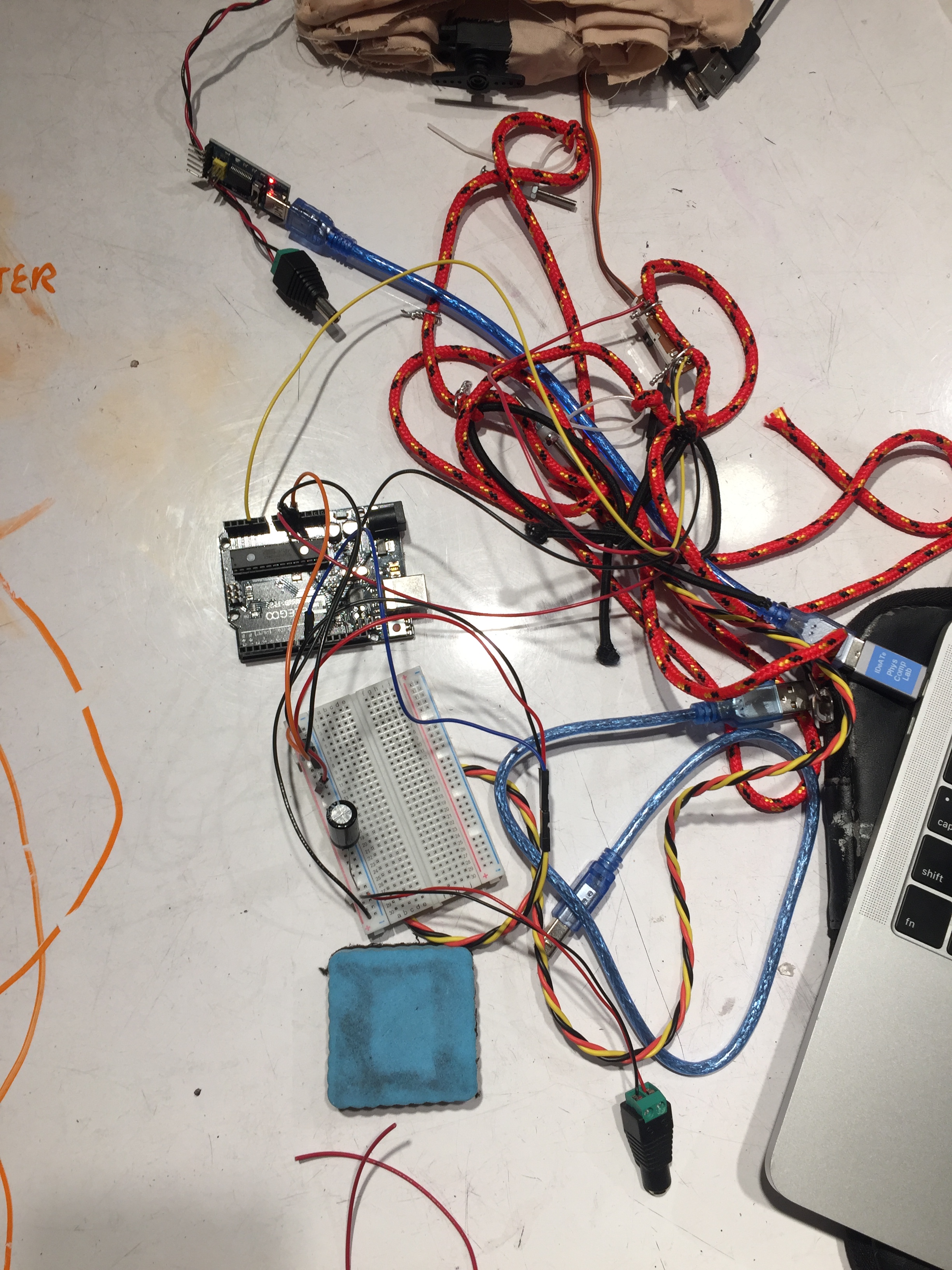 finally getting the mechanism to work on a normal Arduino 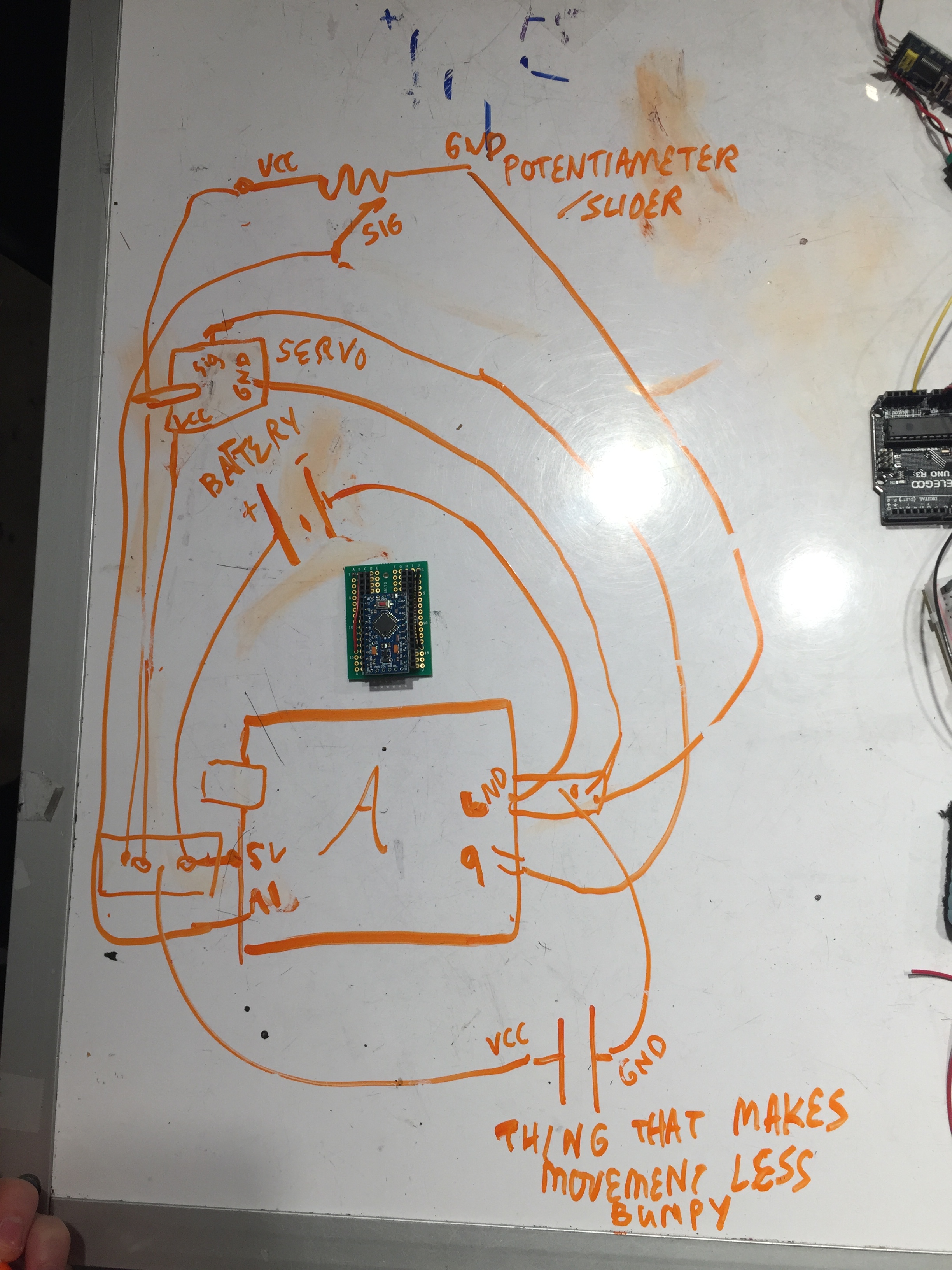 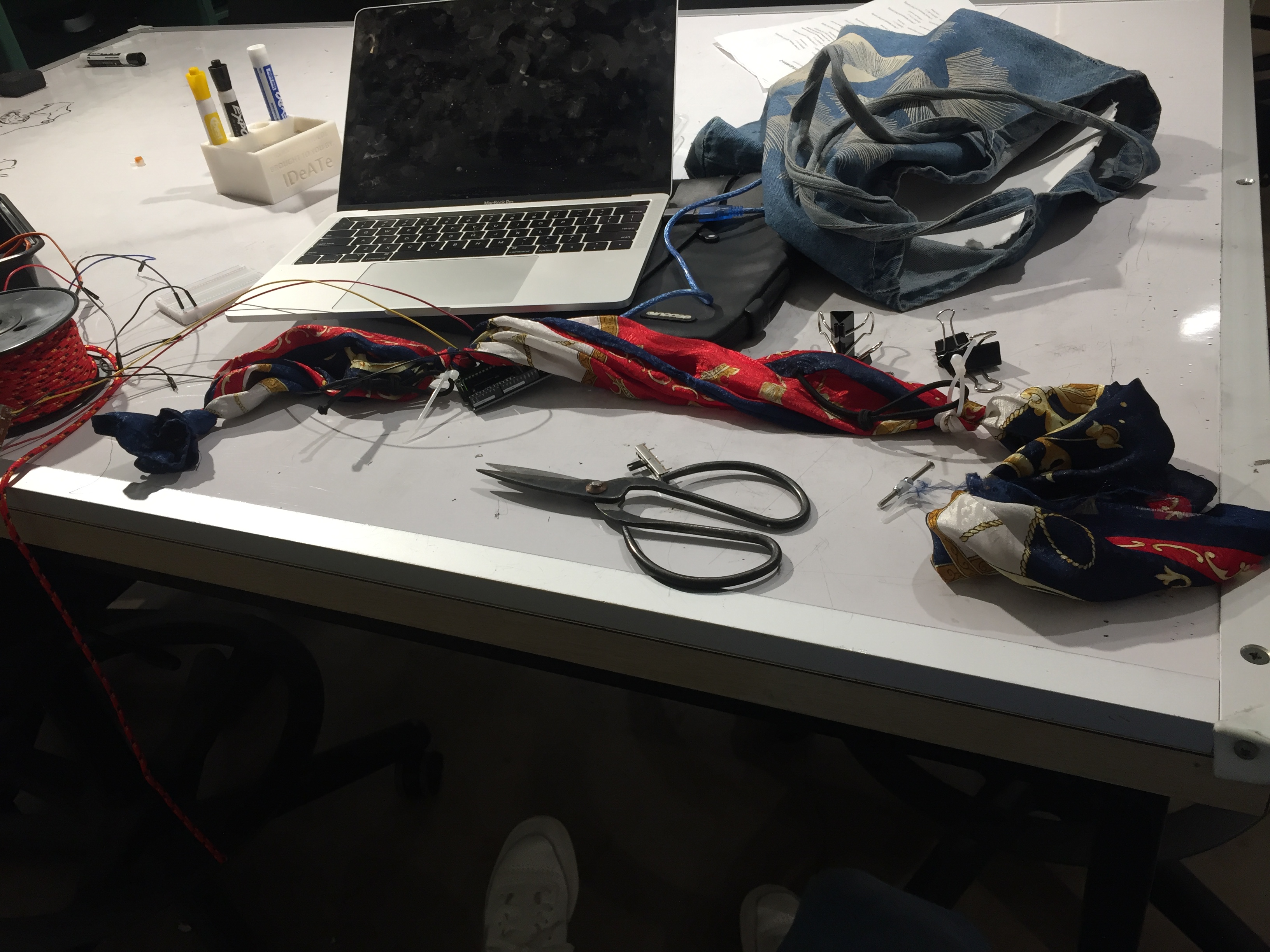 one of the original mechanisms made to measure chest expansion, this scarf however had too much friction 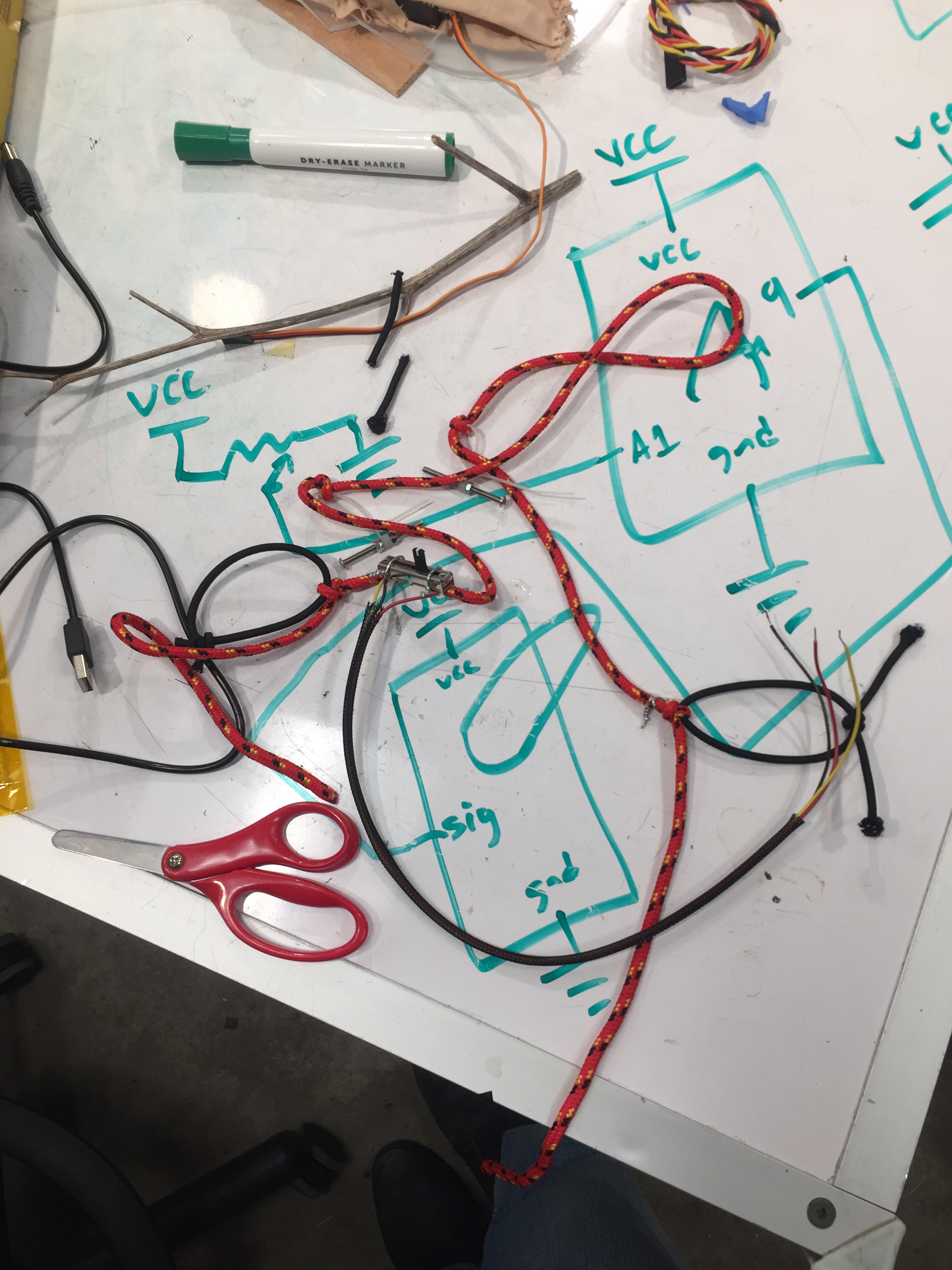 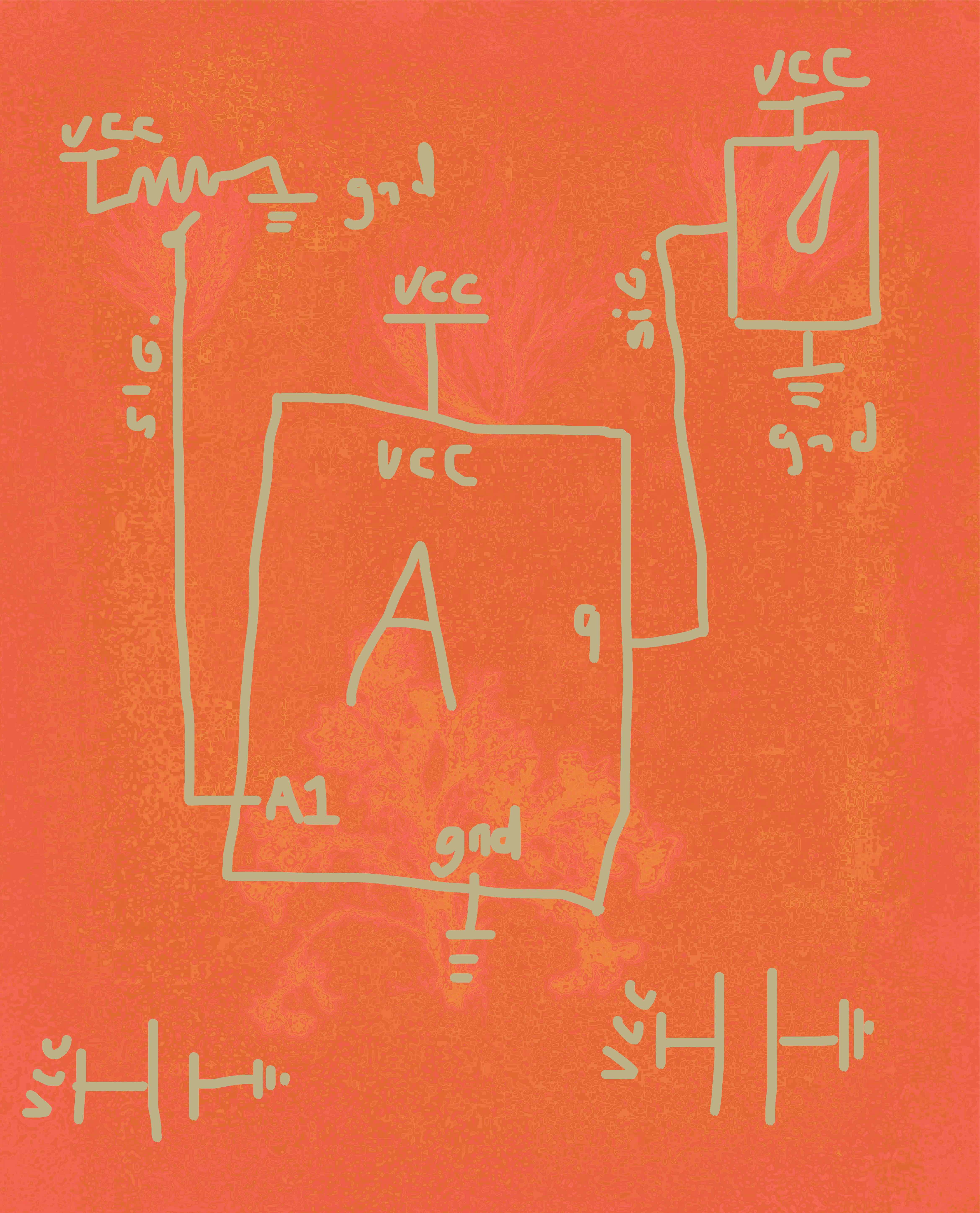 All in all, this project was so rewarding to work on, especially with the culmination of the performance. I love and admire everyone in our class so much.  I feel proud of the final performance, and I believe that this project was a synthesis of much of what I learned from this class.

I have learned from Heidi and Zach and working through previous projects how valuable it is to create prototypes, and how valuable it is to really understand what interaction you are creating with your project. It is more important that this interaction be thoughtful and working fully than for your project to be perfectly beautiful.  This was difficult for me to learn because I have the tendency of wanting to think about everything before I start making it. This stems from a fear of failure and a desire for a “perfect”, conceptually interesting piece;  I’ve realized however, that  by postponing the physical making, I do not give myself the opportunity to improve the piece as I am making it. I do not give myself the time for the physical piece, and the interaction it creates, to marinate so I can make adjustments.

Even though there is always room to improve on this, and this project was not perfect in this process, I know I have grown so much since project 1. I feel really good about the steps taken to realize this project, and I feel good about how it felt to perform. I am so excited for the future and so thankful for everyone in our beautiful class for making this growth possible.