Modern digital computers were originally developed to speed up and improve the accuracy of repetitive mathematical operations. Some of the first electronic computers were, fundamentally, no more than a sort of calculator which could remember and refer back to prior results to use in future calculations in a fixed, predefined way. At this point in their history, computers were simple, fairly transparent, and “special-purpose,” in the sense that they were individually designed specifically to solve particular well-defined problems. For instance, an early computer would multiply two complex numbers (which exist in the form a+bi, where i is the imaginary number which is the square root of –1) and return the result; it could do nothing else.

The complex number multipliers were designed in such a way that the output of a specific operation was wired directly into the input of the next step of computation. The “arrows” inside the machine—steps where one value referred to another—were fixed and couldn’t be changed without reengineering the device.

The first modern reprogrammable digital computer was the ENIAC (Electronic Numerical Integrator and Computer), built in 1945. This behemoth had tens of thousands of vacuum tubes and consumed 147kW of electricity when it was running. Different sections of the machine accomplished specific tasks like addition, multiplication, square root extraction, etc. In order to load a new program onto the ENIAC, patch wires connecting panels of sockets had to be manually reconfigured, a process which took hours to accomplish; each new program was hardwired into the machine by rearrangement of these cables. The glorious mess of patch cables were this machine’s “arrows,” physically visible and at human scale. 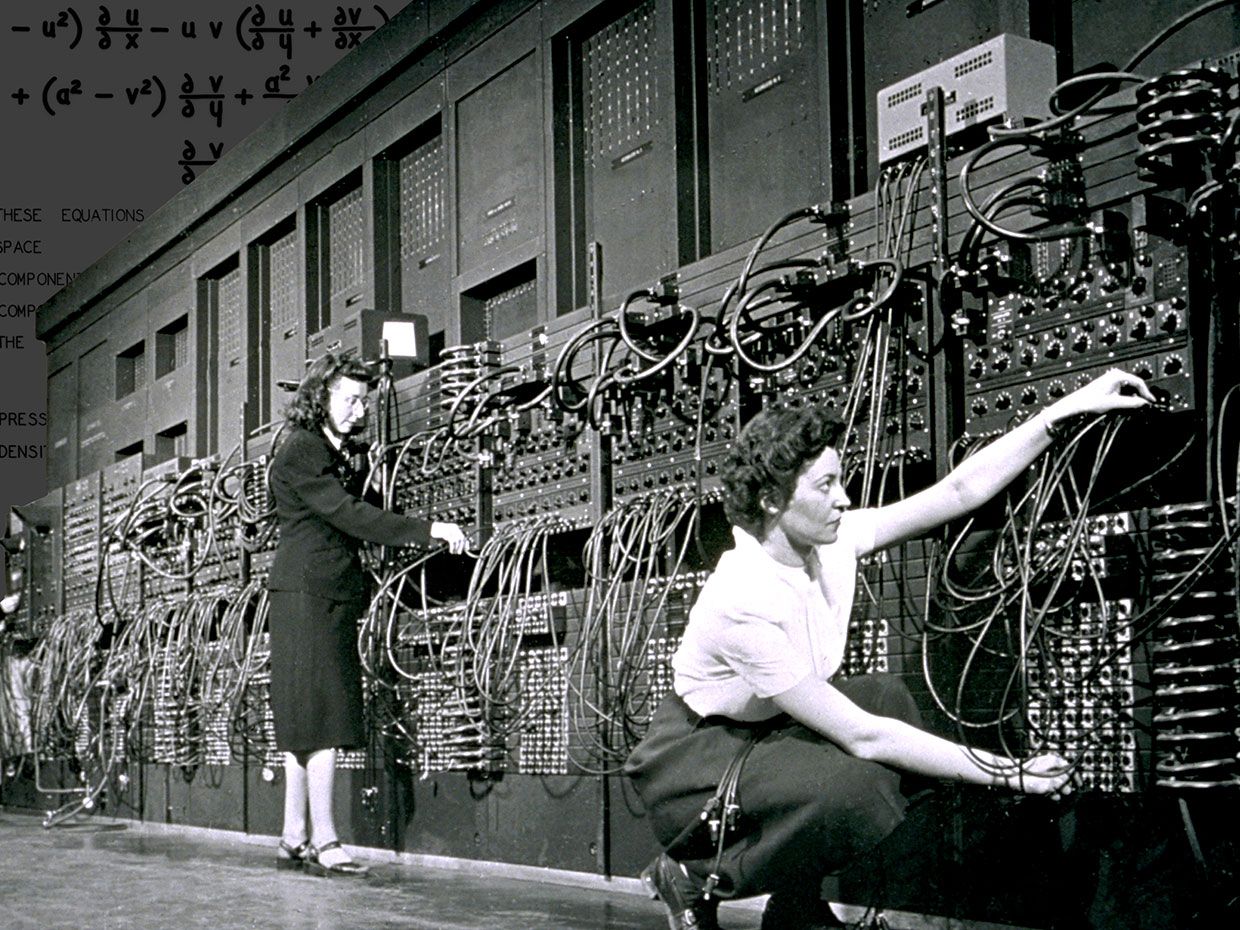 The ENIAC was the fruit of an idea that had emerged 115 years earlier, when Charles Babbage, working with Ada, the Countess of Lovelace, developed a plan for an Analytical Engine. This was to be a machine which could not only perform fixed mathematical operations but also was “programmable”—it would be able to be modified on the fly to perform different functions, in different orders, as the ENIAC was. It’s difficult to overstate the importance of this leap from a fixed-use mathematical solving machine to one which can be programmed to produce different sorts of outcomes from the same input.

Lady Lovelace contributed enormously to the field with her insight that a computer “might act upon other things besides number,” which was the first known conceptualizing of the expansion of a computer’s power beyond the merely mathematically computational. With this, she allowed for an entirely different class of “arrows” to come into being; if non-numerical entities could be represented, and calculated, stored, etc., then the whole world may potentially be the arrow that any particular piece of a computer’s memory points towards.

At the same time that the ability to program computers introduced a new era of possibility, it also brought with it enormous complexity. Remapping the logical operations of a computer was a very difficult and error-prone task; the computer programmer needed a precise and intimate understanding of that particular computer’s method of operation to be able to write successful instructions. Early computer instructions were written directly on punch tape in binary or by rearrangement of patch cables, processes which do not lend themselves to easy understanding or legibility. Generally, a program (or wiring arrangement) written to run on one model of computer would likely not run on a different one because of underlying differences in hardware.

In the nineteen fifties, people began to develop compilers: computer programs which could take instructions written in a fairly generic form and convert them into programs that would actually run on different pieces of computer hardware. The compilers read a piece of software and interpreted the author’s intent, capturing it in a set of formal instructions applicable to a specific type of hardware.

A compiler represents a sort of indirection (or arrow) which points from the programmer’s language to the “machine code” which will actually be executed by the computer. As “higher-level” computer languages were developed, the gap between the programmer’s original instructions and the underlying machine code grew. Instead of writing the fairly confusing  MOVL $-0x8(%rpb), 0x4A, a programmer might now be able to write something more legible like x = 74; (in both cases, the purpose is to set a variable to have the value of 74).

There are more layers here, though. Going from a programmer’s instruction to an underlying behavior in the computer is not so simple as programmer–compiler–machine code; there are other intermediate steps involving further indirection, “linking,” and interpretation along the way. Once the instructions are in machine code, there is more interpretation done by the microcontroller, using yet another type of code called “microcode,” which provides further indirection/redirection when the code actually runs. Following is an example to briefly illustrate this process.

An example from the Arduino

If you wish to blink an LED on pin 13 of the Arduino, which is the typical point of entry to the hardware platform for new learners, you might run this bit of code:

This is written in C. But what does the Arduino actually run? A generated hexadecimal file, which looks like this:

These are lines 36 to 40 of the hexadecimal; it is 60 lines long. Here we have seen the two endpoints of the process, from highest-level (C) to lowest-level (hexadecimal machine code).

To see the indirection and reinterpretation in the midst of them we might examine something as simple as digitalWrite(), the command which turns a pin’s electrical output on or off. When the user asks the Arduino “integrated development environment” (IDE) to push their code to the board, it goes through many sequential steps, and one of them is locating and interpreting the definition of digitalWrite(), which is:

This definition may be longer and more complex than we expect, but fundamentally the command is simply an on/off switch (lines 14 and 16 are the actual things that would prepare the Arduino to set a pin to turn on or off respectively). The definition itself rests on many other definitions; NOT_A_PIN, for instance, is just a variable, or symbol, storing the number 0. HIGH, similarly, is merely a variable pointing to the number 1. Ultimately every time any number is stored or referred to on a modern computer, the stored value is simply a series of tiny physical units which are either “high” or “low,” “on” or “off”—these may be transistors, regions of magnetic field or electrical charge, or a less-reflective vs. more-reflective area on a thin film of metal. Abstractions built upon abstractions built upon abstractions!

Getting back into our descent through the layers of abstraction: the first few lines of the Arduino’s assembler version of the digitalWrite() command look like this:

This is the penultimate level of proximity to the hardware; these assembly code instructions are (in a slightly simplified sense) turned into a part of the hexadecimal machine code shown earlier. Any microcontroller has a list of “opcodes,” i.e. operation codes, particular to it. These are often represented as three- or four-letter acronyms to help the human programmers who are using them, but in yet another indirection, the opcodes written in letters are themselves referring to a purely numerical value; for instance, LDI (“load immediate,” a basic process of writing a value to a memory location) is represented by opcode 1110. The ATMega328 has a list of about 100 such codes that will work on that hardware.

As you’ve seen in this section, even the relatively simple, inexpensive, and low-powered Arduino contains a real maze of layers of redirection. A laptop or desktop computer is a far more complex machine than those small chips, and with many more internal layers to show for it.

Computers are capable of undertaking truly complex tasks at high speed. Underlyingly the complexity they exhibit is a carefully choreographed interplay of many, many small, simple elements of information, called bits. Each little transistor, following a well-defined rule of electrical behavior, can be said to be a very small cog in a very large machine (for instance, the Atmel chip driving the Arduino Uno has perhaps a million or so).

In the natural world there are myriad examples of individual decision making elements working together in such a way that the complexity of the whole is significantly greater than the parts combined. Consider the flocking behavior of birds or fish: each animal can be modeled as following a simple set of rules regarding their own movement with respect to their peers, encoded by three parameters (cohesion, alignment, and separation). When the whole group follows such a set of rules, incredible larger-scale complexity emerges. Here is an interactive example of a population-level simulator of many individually driven elements; it’s an implementation of Craig Reynolds’s “Boids”:

Large-scale order can emerge from the “decisions” or behaviors of small individually mobile elements, even when there are seemingly no decision-making agents present; regular, periodic sand waves on a beach are merely the result of countless grains which have fallen into a large-scale order, a result of their individual and collective response to wind patterns. On a larger scale, given the right conditions, sand will form into slowly shifting dunes that are hundreds of feet tall.

We may contrive artificial systems which explore the results of many individually-acting elements sharing a common environment; the flock above is one example. A different sort of system can be modeled where each member of a two-dimensional grid has some awareness of the cells around it, and responds to them according to a set of rules; this was famously pioneered by John Conway, in his Game of Life, and Stephen Wolfram claims to have invented an entirely “new science” that’s driven by these “cellular automata.” In a rather stunning illustration of the higher-level complexity that can be achieved following these 2d grid-based systems, an internet denizen responded to an open challenge by constructing a functioning digital clock display built entirely in a Game of Life simulation.

It is tempting to relate the complex behavior of many small individual elements to our own brains, which are, after all, composed merely of many, many individual neurons, attached to each other in a complex web from which our consciousness arises.

Working as a group, build a system, machine, installation and/or embodied creation that responds to, is inspired by, or is in dialogue with some of the ideas above. Your project must:

You must consider some element of the larger context in your project’s design and/or content. For example, the architecture or environment your work will be installed in, physical characteristics of the space (light, sound, smell, etc.), the history of the building or components of CFA, the public that will be attending the event, or the performances or work from other courses.

Prepare two distinct project ideas to turn in and discuss.

Each of your project ideas should include:

We will review your proposals with you individually in class.

You will present a proof of concept tech demo and low-fi maquette of your project to the class. It need not be high-fidelity. There is a lot of different thinking in the design world about what “prototyping” means. Designer and academic Graham Pullin, in his excellent Design Meets Disability (2011), helpfully outlines a few different approaches:

For this assignment, you will be combining components of looks, works, and behaves-like prototype approaches. This piece must shows clear progress towards your final goal. Use this time to focus on the interactive and aesthetic aspects of the project.

In class, we will discuss the prototypes. This deadline is meant to help you prepare to deliver a polished finished less than two weeks later.

Submit your maquette by adding it to your process blog documentation and sharing the URL of this post to Canvas via this assignment.

Your presentations should address the following: