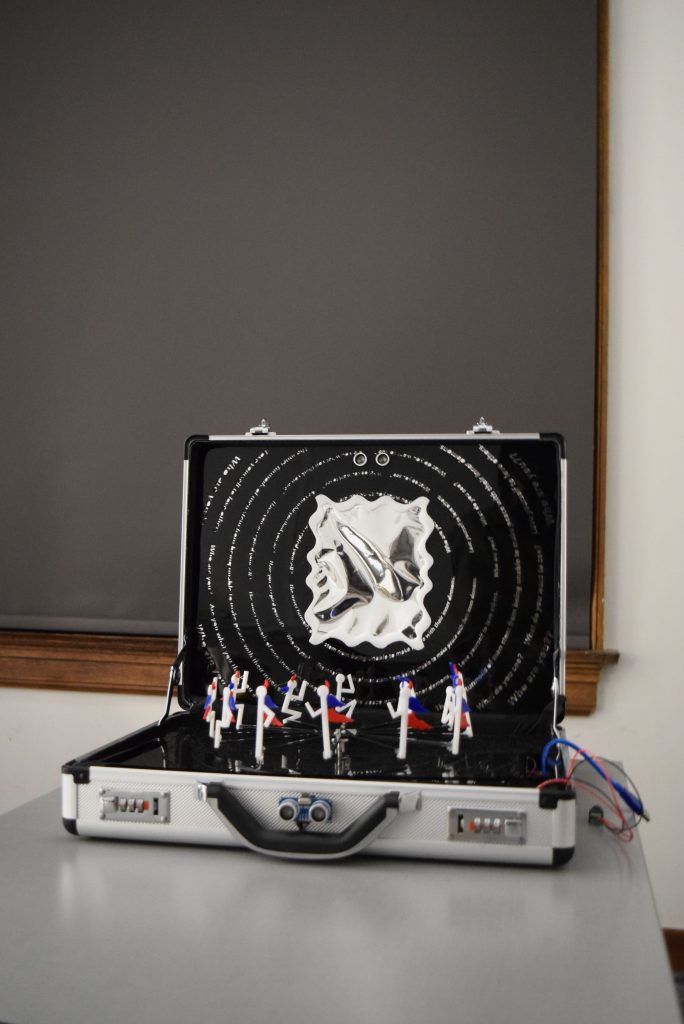 Who Are You
Final Project Documentation

Why this specific Title

The title “Who are you?” was to force an introspection for the guests that look at the piece. The piece was really meant for people to ponder on how they see themselves.

In the end, the main concept we wanted to enforce was

“There are not so great things about you that you should accept, love, and forgive.”

We wanted the guest to accept “the demons” they have or see in themselves.

The guest would have been enchanted by the sudden start of the machine. They see in the blue light an angel that falls and rises repeatedly.

As they come closer, the light changes to red and that angel has now become a devil.

As they have drawn nearer, they would see the mirror in the back of the apparatus. They see themselves but they also see these quotes and questions in the laser cuts.

This would cause the viewer to introspect about their own self. It tries to deliver a message that when we look close enough we will see faults but we should accept those faults.

The device is fairly simple. The whole device is made of 3 main active components

This simple device and with a simple effect had the potential to tell an intriguing narrative. It causes the viewer to be mesmerized by the effect but also allows their presence to alter what they saw.

In addition, the mirror at the back allows the visitor to be part of the piece.

Even though, there were some pitfalls. People were drawn in the piece and were amazed at how well it seemed to work.

There was some difficulty in getting the space dark enough for the zoetrope to be shown. We needed to add an enclosure that would limit the light to the piece but it added to intimate nature.

The figurines could only hold small distinct features. This caused the viewer to really focus on the small changes that were happening between state changes.

All in all, there were some design fallbacks that really ended up serving the narrative better.

From a technical perspective, we learned how zoetropes worked and how we could adjust the illusion with just a light color change. We also learned how measurements should be done for laser cutting and how trial and error play a large part.

In the end, the piece did feel personal. The fact that the quotes were not readable added to the mystery of it. People enjoyed that it wasn’t int their face.

The piece was in a way a success. It was a conversation starter and it was mesmerizing to see. There was a comment that there was a smear effect that caused people to not see the figurines as much.

We were initially scared of adjusting the duty cycle for it fearing that it might cause the figures to not stick out as much.

After some testing after the facts, we did modify the code so the duty cycle is smaller and the smearing was reduced. (Thanks Zack)

There were some comments that it would have been nice to have lighting throughout the piece. This would have been a nice feature but time and budget was a bit out of our hands

Photos of the Device

Photo Gallery from the show

The code can be found at

You can download the code as a zip here

Cad Files of the cuts can be found in the link below.

Evangeline: She designed and laser-cut all of the pieces. The mirror and the figurines of the zoetrope were mainly her efforts. There were a lot of struggles in making the Zeotrope be the right size for the piece and tremendous trials and errors.

Ebrahim: He worked on the electronics and code that brought the experience to life. This includes the strobe light and the speed rotation.

The design was done collaboratively.