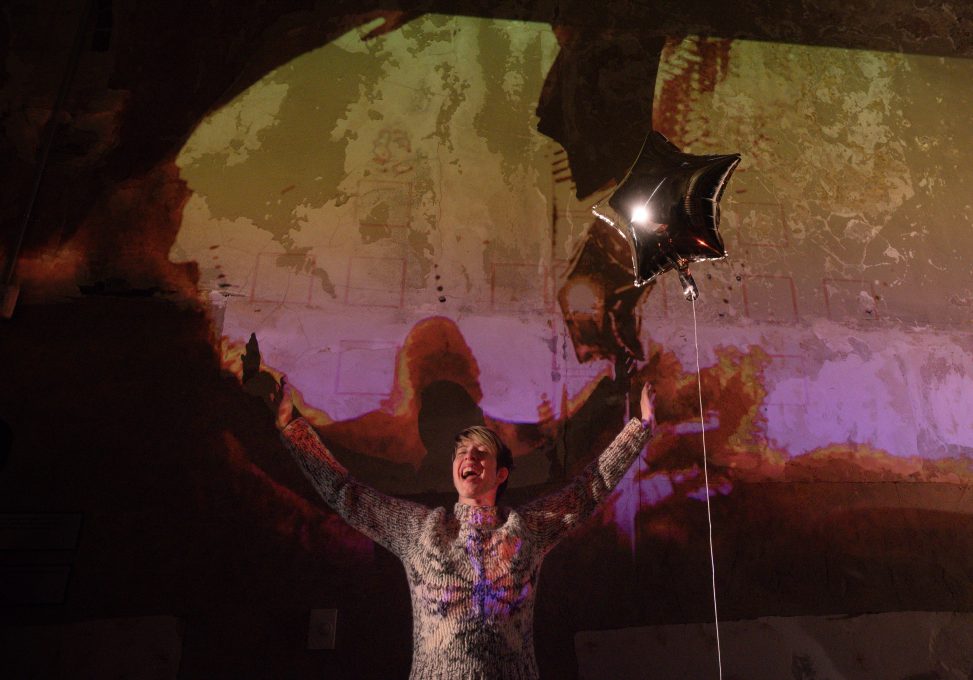 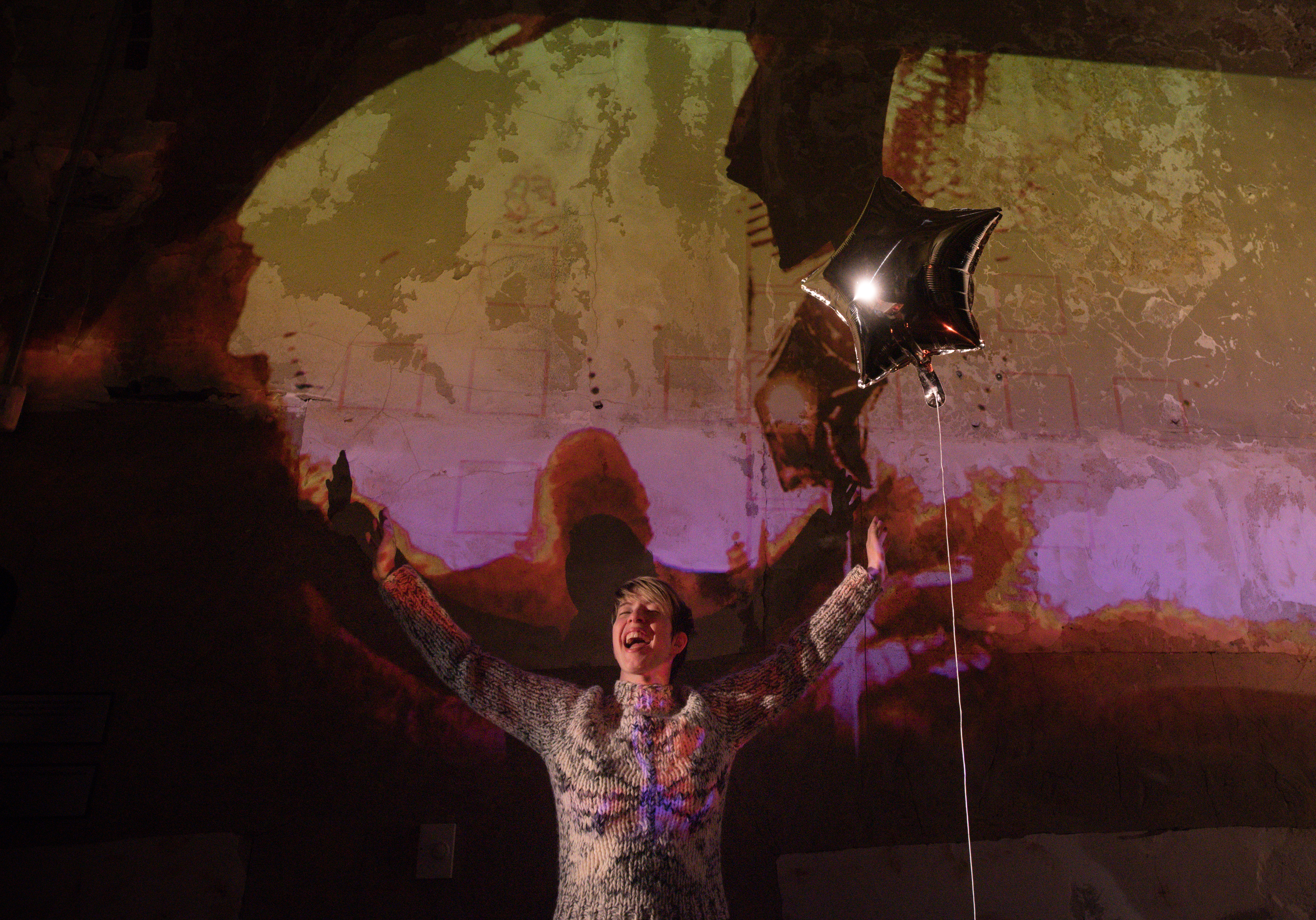 An audience member interacts with a mirrored balloon.

Judith Butler’s concept of performativity (standing most obviously on the shoulders of Marcel Merleau-Ponty’s phenomenology) proposes that we define the self, and the various types of identity that make up the self, as a process rather than something complete or stable.

Butler’s most famous example is that of gender. Gender (EG ‘womanhood’) means very different things in different cultures, and indeed while babies are born with somewhat differing endocrine systems, all arrive on earth unaware that tall shoes and pink things correlate to an authentic expression of certain genitalia. And yet, by early adulthood, for some the use of tall pink shoes feels to be an authentic expression of the self; and because it feels that way it (by definition) is. How does this happen?

According to Butler, the answer is that gender is essentially a process, in which you intentionally practice (or perform) certain ways of being that you perceive as being associated with you. And over time, both personally and a culture, this performance becomes natural and authentic. As such, what gender means is different for every person, and the agreed-upon end result (tall shoes = Woman) is not inevitable. This argument is supported by recent neuroscience: whatever you practice, you learn, and learning is a literal re-structuring of connections in the brain to prioritize certain outcomes. So whatever you practice, you become.

Which brings us to this piece, in which a balloon is demonstrating the process via which one can become a balloon. 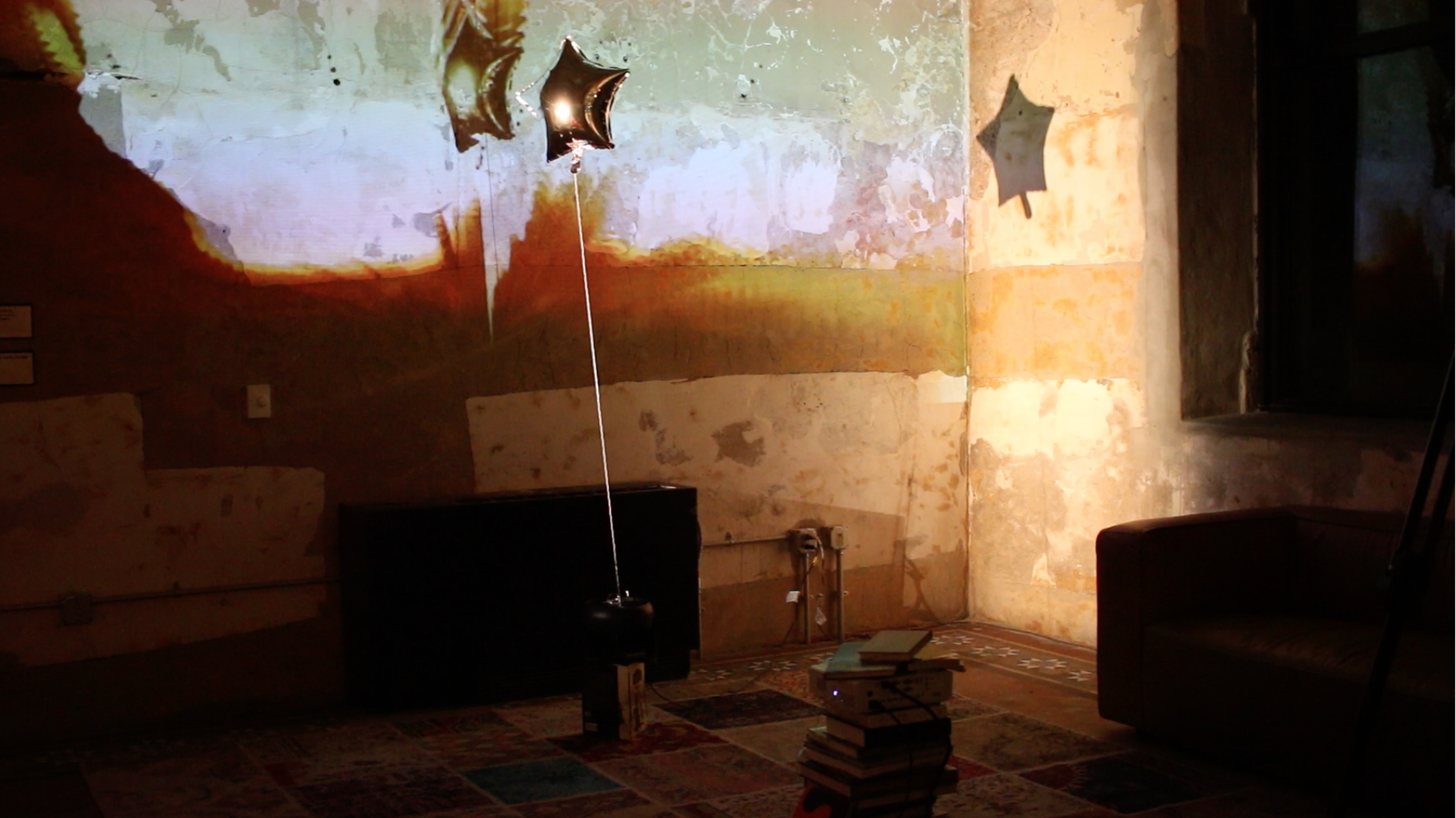 This is an ‘analog’ video delay piece: there is a projector pointed at a wall, and there is a camera pointed at the same wall. The slight difference in focus and geometry between the camera and the projector means that the projected image doesn’t quite match the camera’s capture of that image. This offset, when repeated 24 frames a second, results in interesting trailing patterns through space. The closer the focus and image are to each other, generally the more active the effect and the cooler the image.

This edition of the piece featured a mirrored balloon tied to a fan pointing straight up. The mirrored balloon naturally dances in the air of the fan, and so there is always an active input to the feedback system, to make the delay stream move around and look nice. The space is set up in such a way that it is also possible for audience members to get in front of the assemblage, and make their own patterns on the wall. There is a couch on one wall for people to hang out and watch like you would watch a fire on a stormy night. To tie things together thematically, the projector and fan are both stacked on top of piles of architectural books.

This was a tricky one. The matching of the lensing between camera and projector is very finicky, and slightly different alignments and lightings create very different effects. I initially intended to create a system via which a participant could have their own body projected on them, while leaving feedback trails behind in their wake. This would have been a very different physical installation– but more to the point, it would have required the camera lens and projector lens to be as physically close to each other as possible, if the effect would be replicable across a range of distances from the camera. It eventually became clear that I didn’t have the equipment or installation space to do that correctly… and so I decided to move to a short-throw projector, and a camera with a medium-wide field of view. I’m still interested in the other piece, and I think it could be good someday… Maybe they could go in an installation together.

things you can write on paper before just eyeballing it

Things I enjoyed about this installation:

Things that could have been improved: