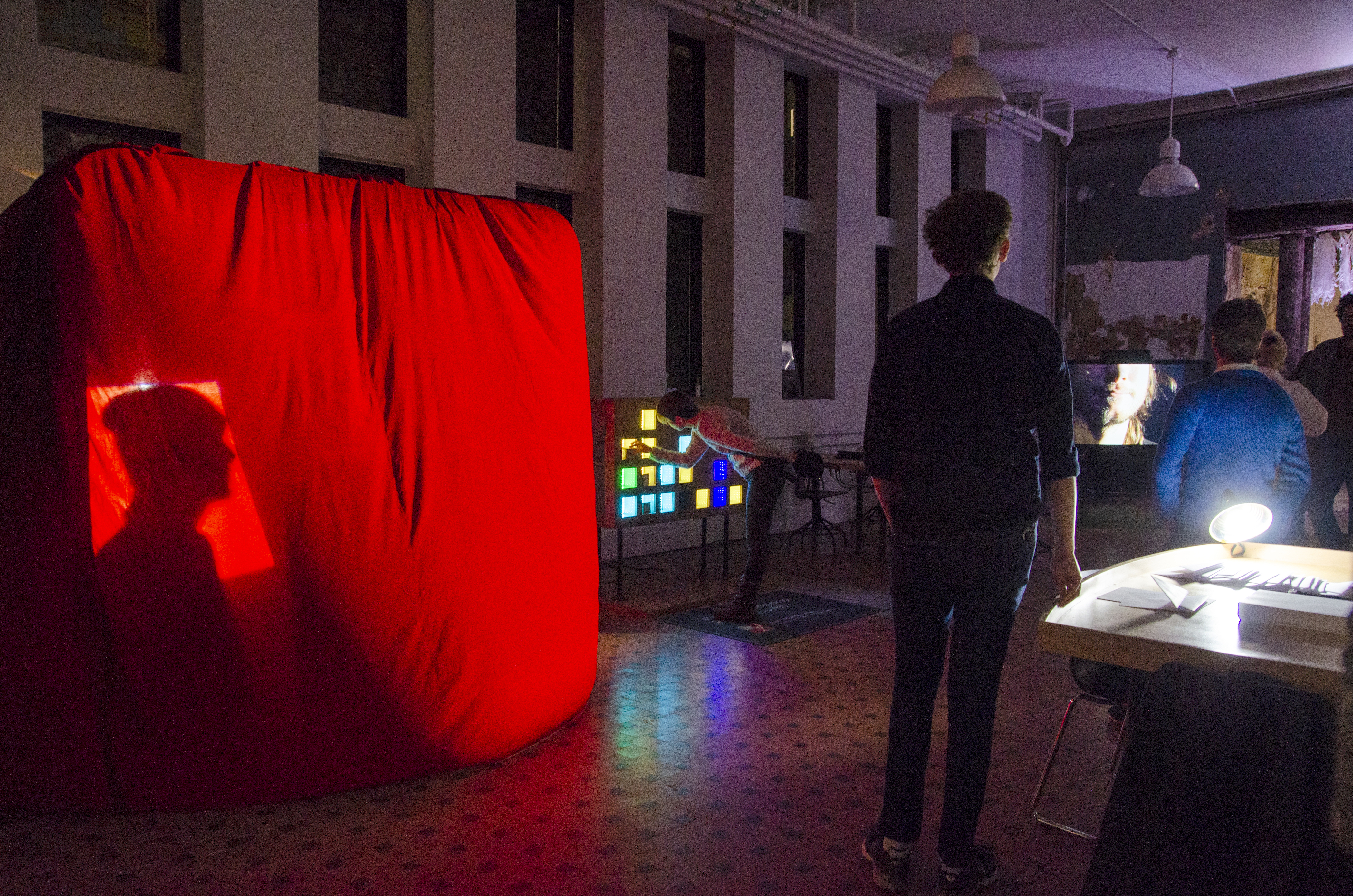 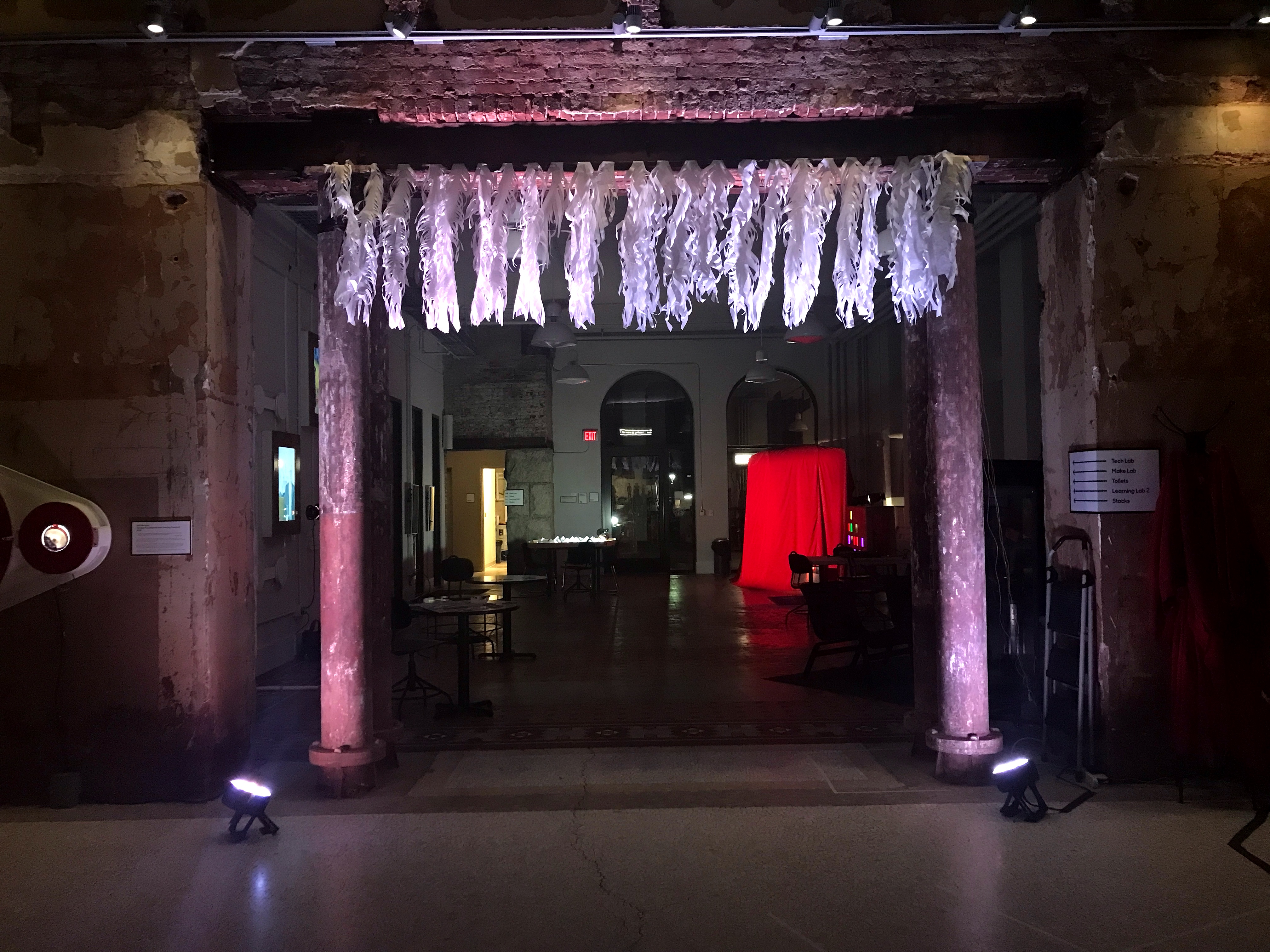 A view from the entrance to the room. [Photo: Padra Crisafulli]

But what is it?

In a room, there are three elements. 1; there is an enclosed space with the performer inside, as well as cameras focused on different distinct parts of the body and a variety of props to be used. 2; these cameras are displaying what they see onto screens throughout the rest of the space, set up so that a person can only see one screen at a time. 3; there are letters at a station with different prompts written on them, as well as the option to write your own prompt, which is then delivered to the performer in the enclosed space to act out. The intersection of these three elements creates a performance in which different parts of the body are isolated when performing an action, forced to be considered by themselves as opposed to a part of the whole body. 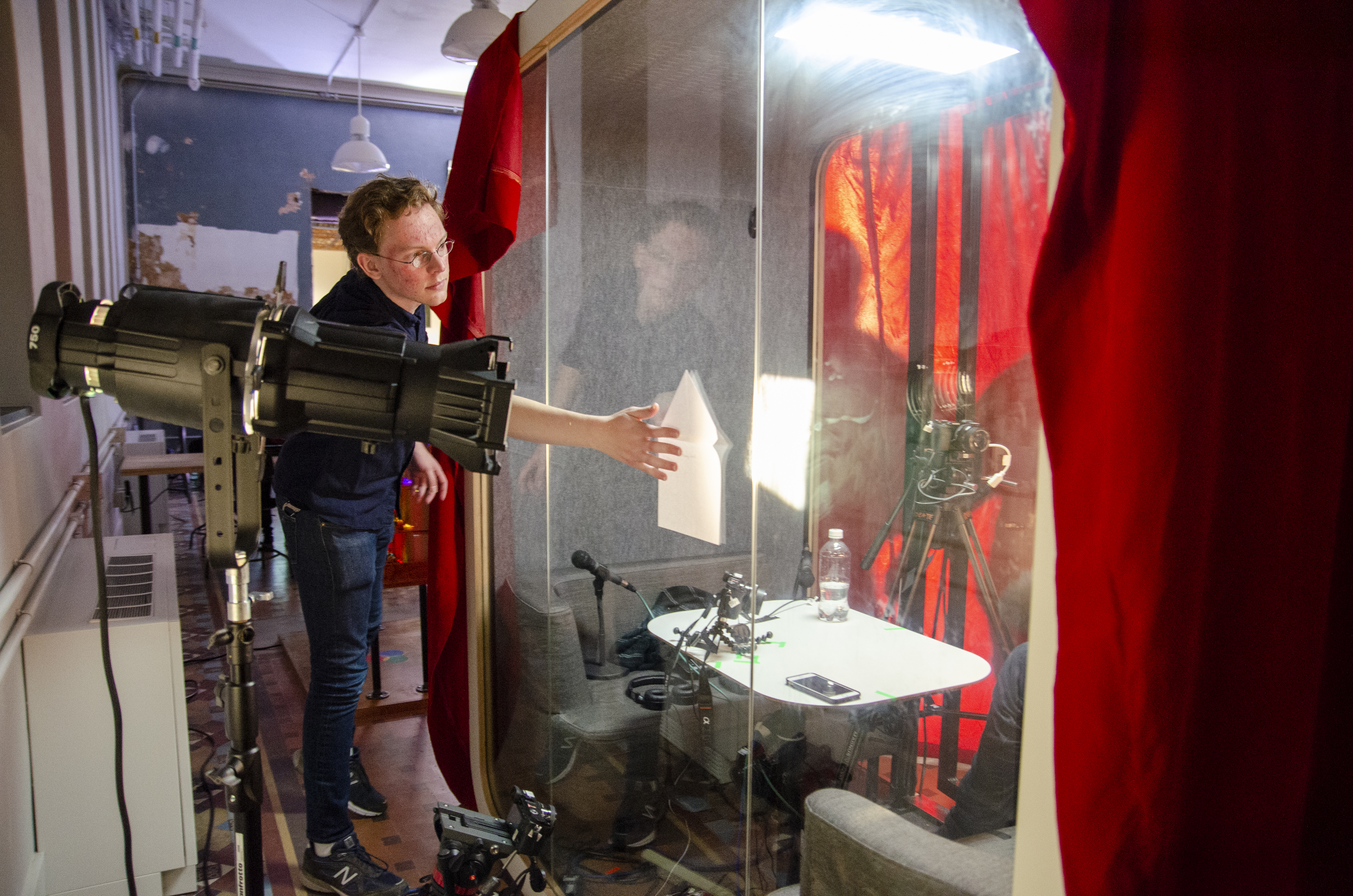 1; there is an enclosed space with the performer inside, as well as cameras focused on different distinct parts of the body and a variety of props to be used. [Photo: Christina Brown]

2; these cameras are displaying what they see onto screens throughout the rest of the space, set up so that a person can only see one screen at a time. [Video: Jacquelyn Johnson] 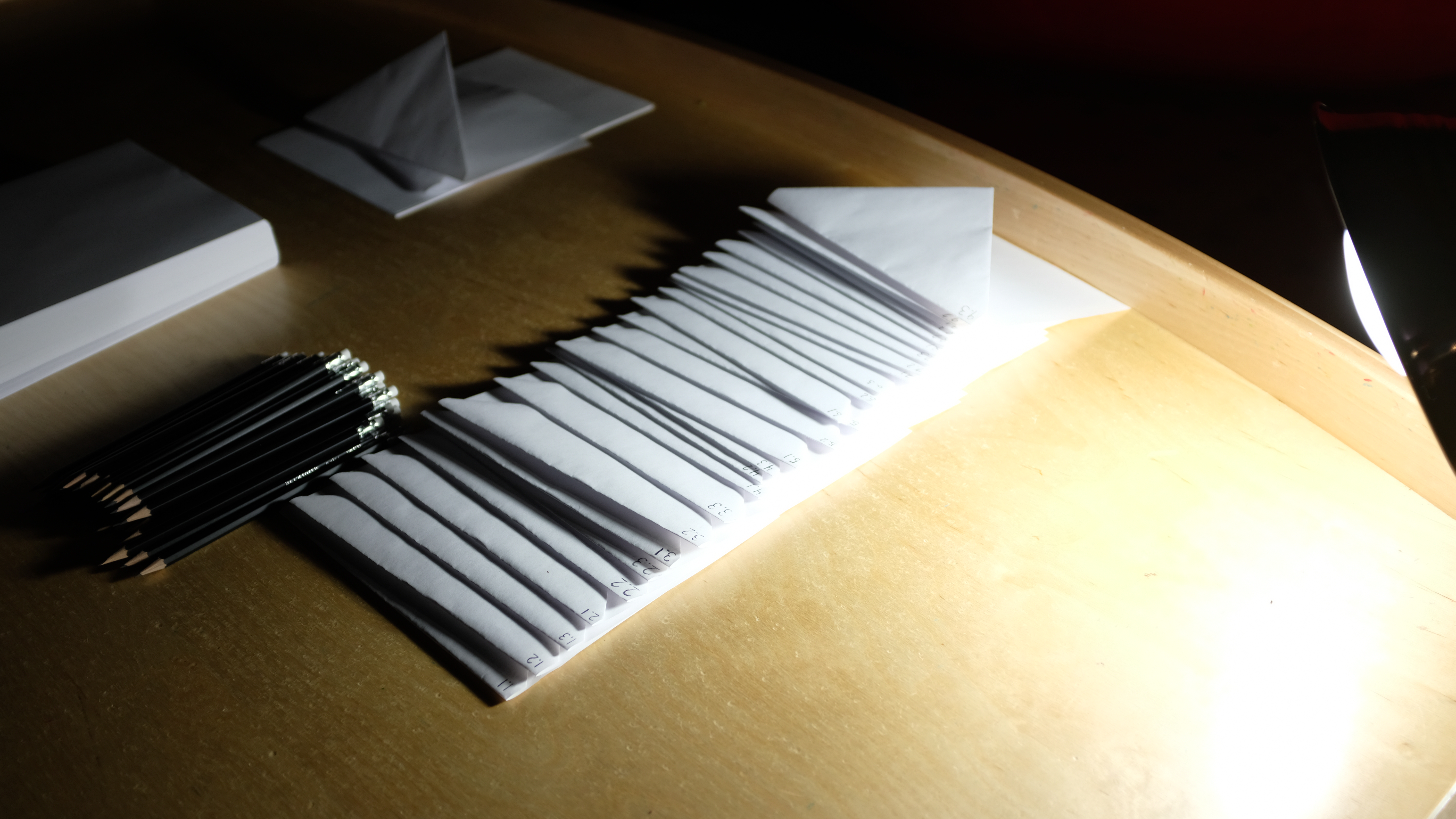 3; there are letters at a station with different prompts written on them, as well as the option to write your own prompt, which is then delivered to the performer in the enclosed space to act out. [Photo: Christina Brown] 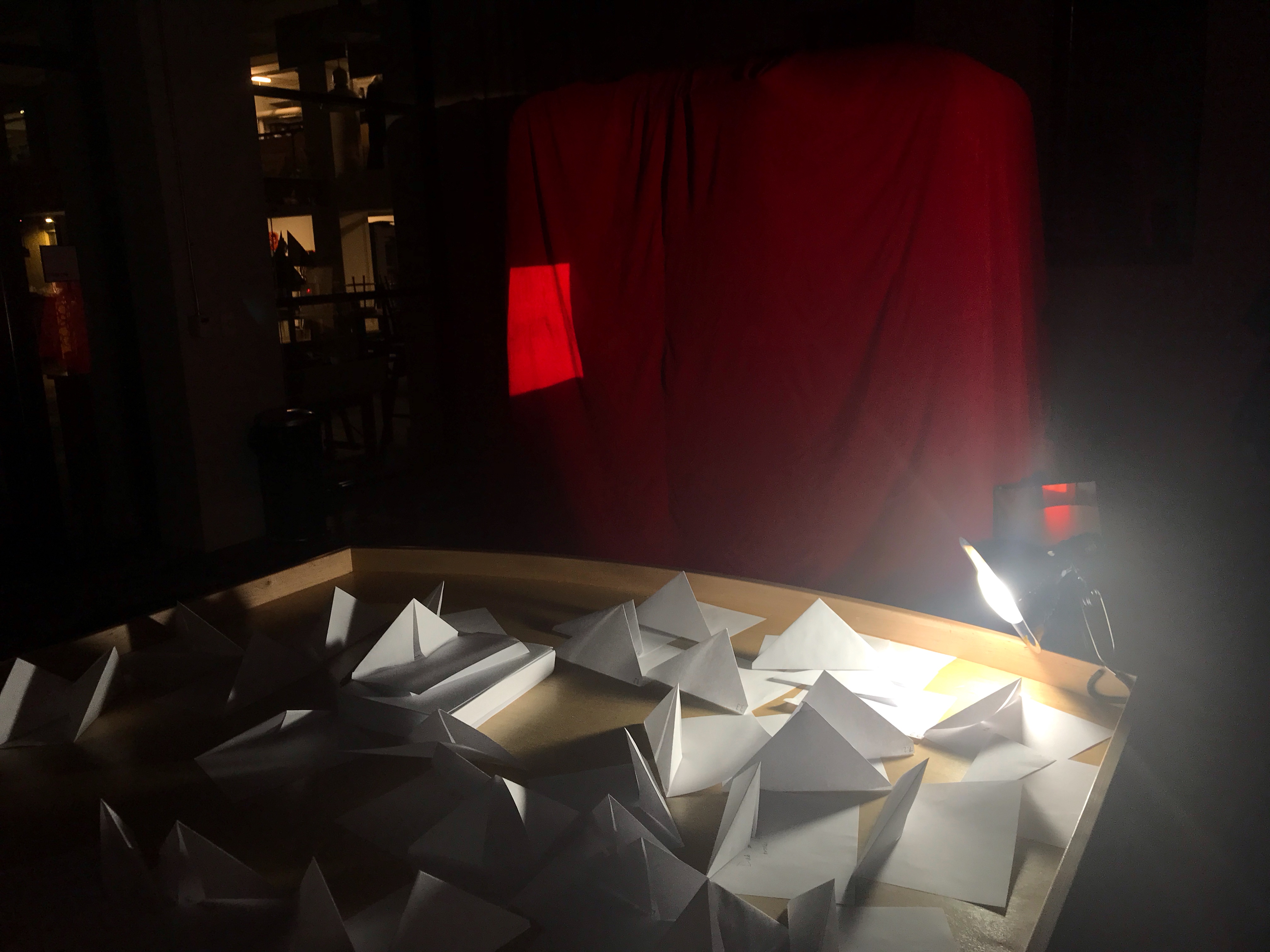 In this installation, the letters and the enclosed pod were directly across from each other, so that the time between submitting a prompt and seeing it acted out was smaller. [Photo: Padra Crisafulli] 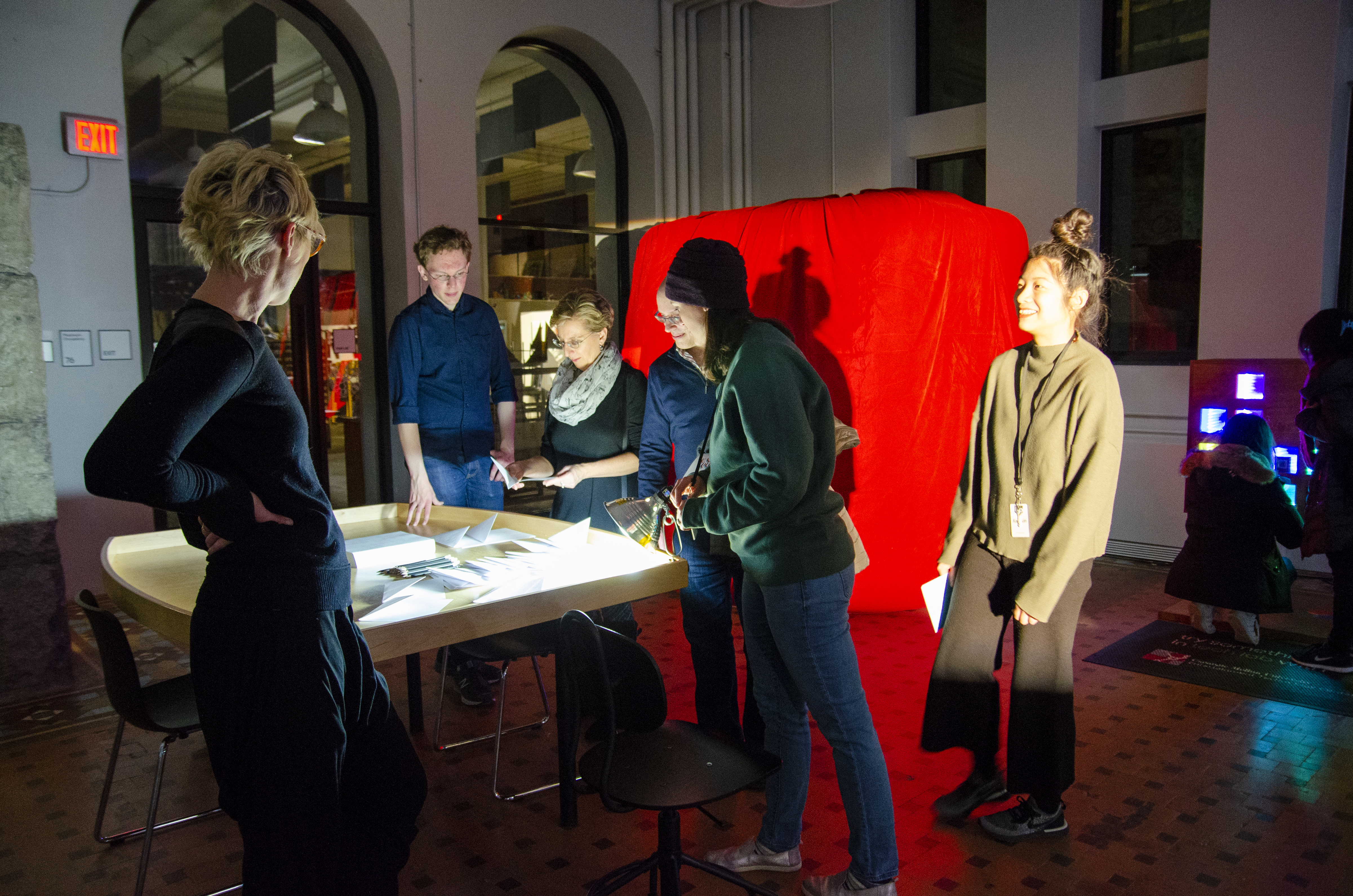 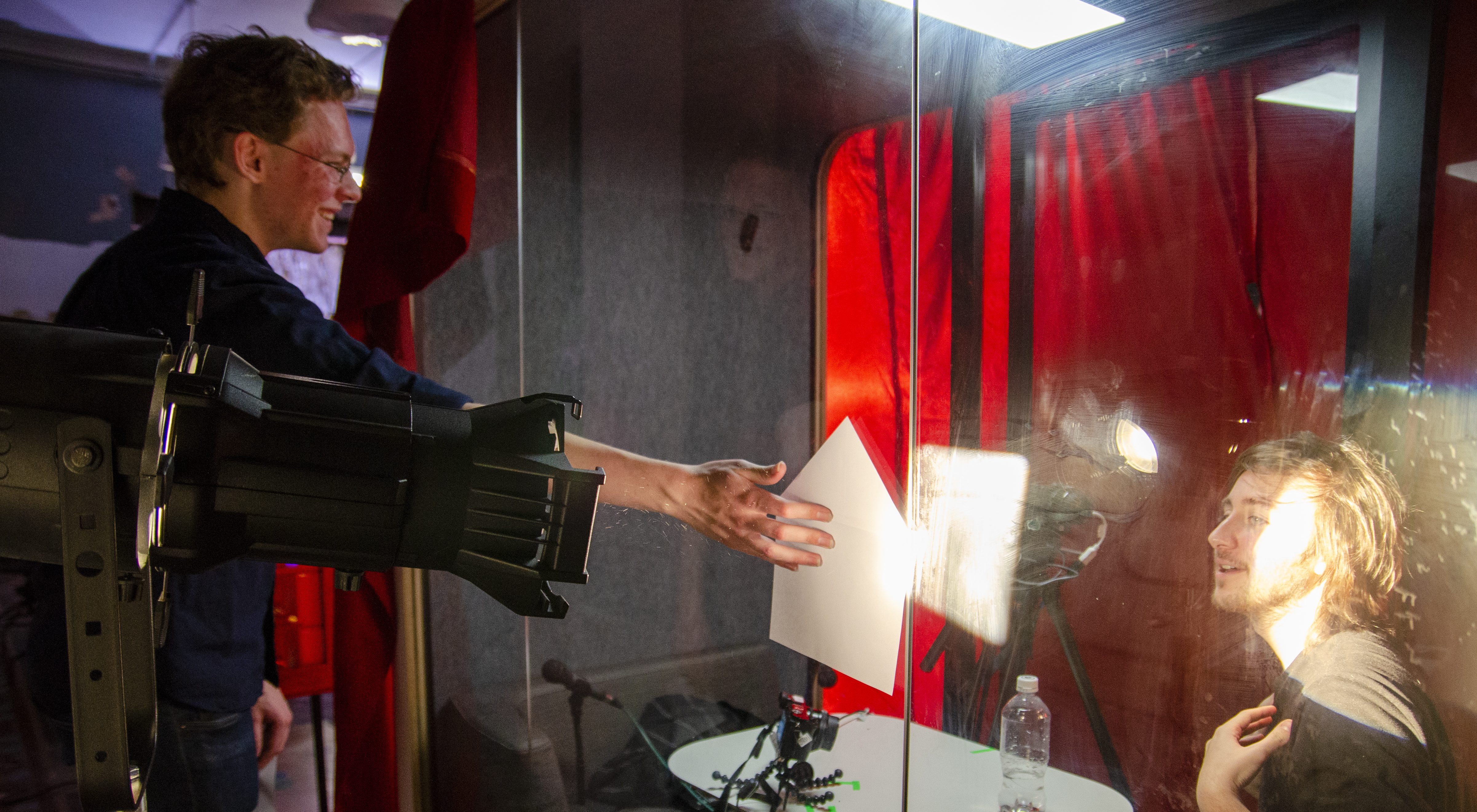 This piece was borne out of a deep struggle, both with the initial prompt which was both fascinating and incredibly difficult to translate into something tangible, as well as the time crunch that I was under in the midst of all of my other work. The concept of ‘arrows’ has so much resonance in other fields, like semiotics in linguistics and symbolism in any artistic form, that it became daunting to consider how one can variate on that, respond to it in an artistic way that hadn’t already been done a million times before. And to do it with as little time as I could devote to it, yes, it was in fact very hard. Knowing this, it should come to no one’s surprise (at least, not my own) that I am very unhappy with how this piece ended up being. Maybe that is because there is potential in it to be interesting, and conversely, the potential that it becomes another self-indulgent ‘look at me being strange’ kind of work. 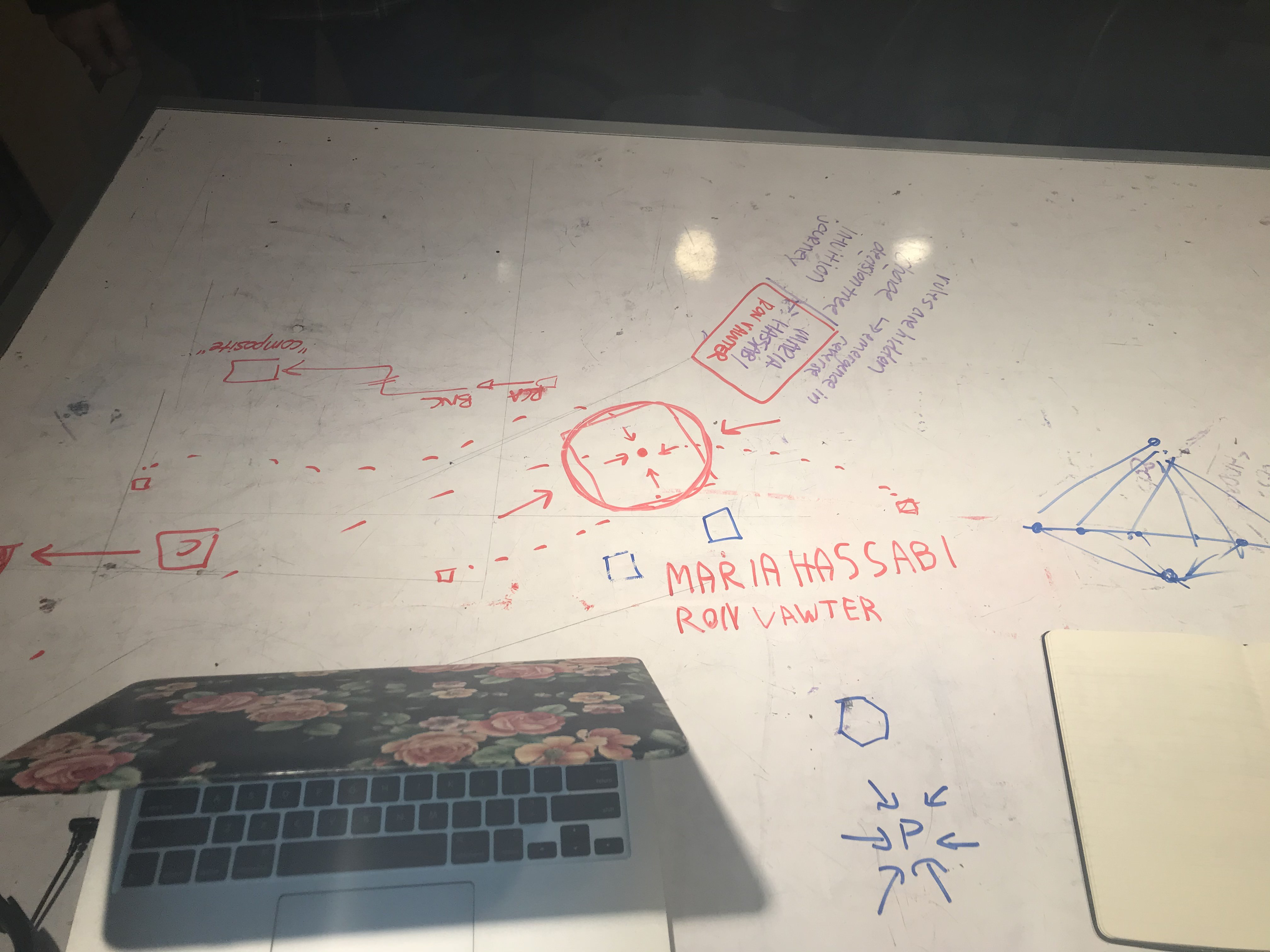 The initial idea as written out, with help from Eben Hoffer.

Self-flagellation aside, in terms of growth, maybe this wasn’t all for naught. I have always had a difficult time asking for help, especially in artistic endeavors. But especially in a class in which I am learning new skills and immediately applying them, asking for help has been more and more pertinent not to necessarily the best product, but to anything being produced at all. I think this reluctance to ask for help when producing work like this comes from wanting to hold onto this idea that, funding aside, the artist is the sole reason things are made. This thought made a conflict within myself as I tried to put this together, until I ultimately created a piece which cannot exist without other people, right down to the title. I had doomed myself to this kind of irony from the very beginning. 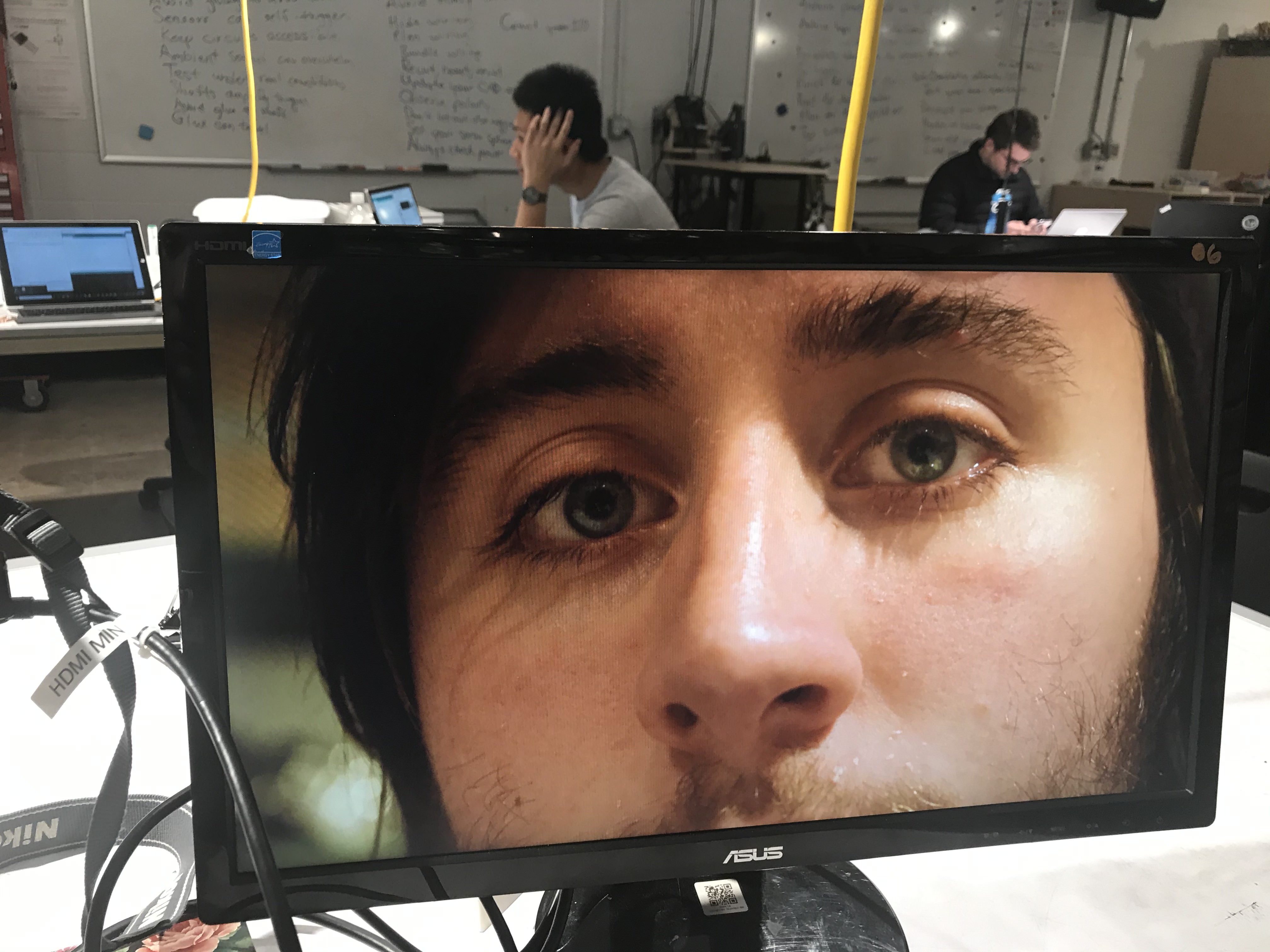 A day of testing with the original cameras. 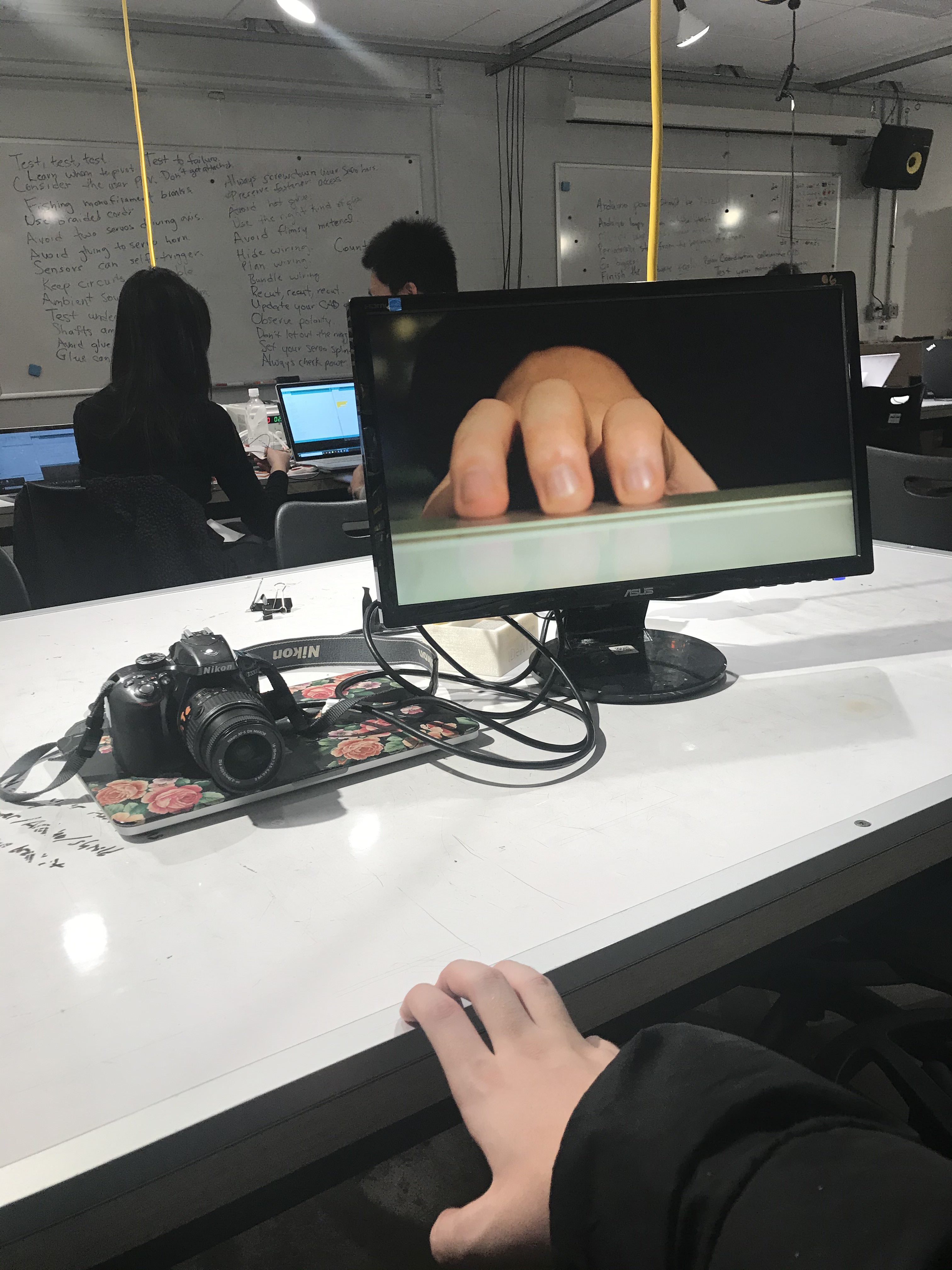 It was around this time that the idea of using fingers as a subject arose.

The day of the MuseumLab showing, I was taking the bus to the North Side when I realized that I had accidentally turned myself into a computer. Sticking myself in an enclosed space, receiving commands, returning the constrained results of those commands; and yet, I know one of the critiques on my written description was that I had written it to be incredibly impersonal. Maybe I knew deep down that this analogy was coming, even though it never once crossed my mind. During the performance itself, I overheard one of the audience members noting that it was like I was an animal in a cage. And yet, later on in the evening, I was having a lot of fun with them as they began to write their own prompts for me which were silly and playful. If I were to do this again, this straddling of the deeply personal and the impersonality of the performer as they are separated, as well as to put more thought into how the order in which an audience member engages with any of the elements impacts the interaction. Maybe there is more of a narrative to this. 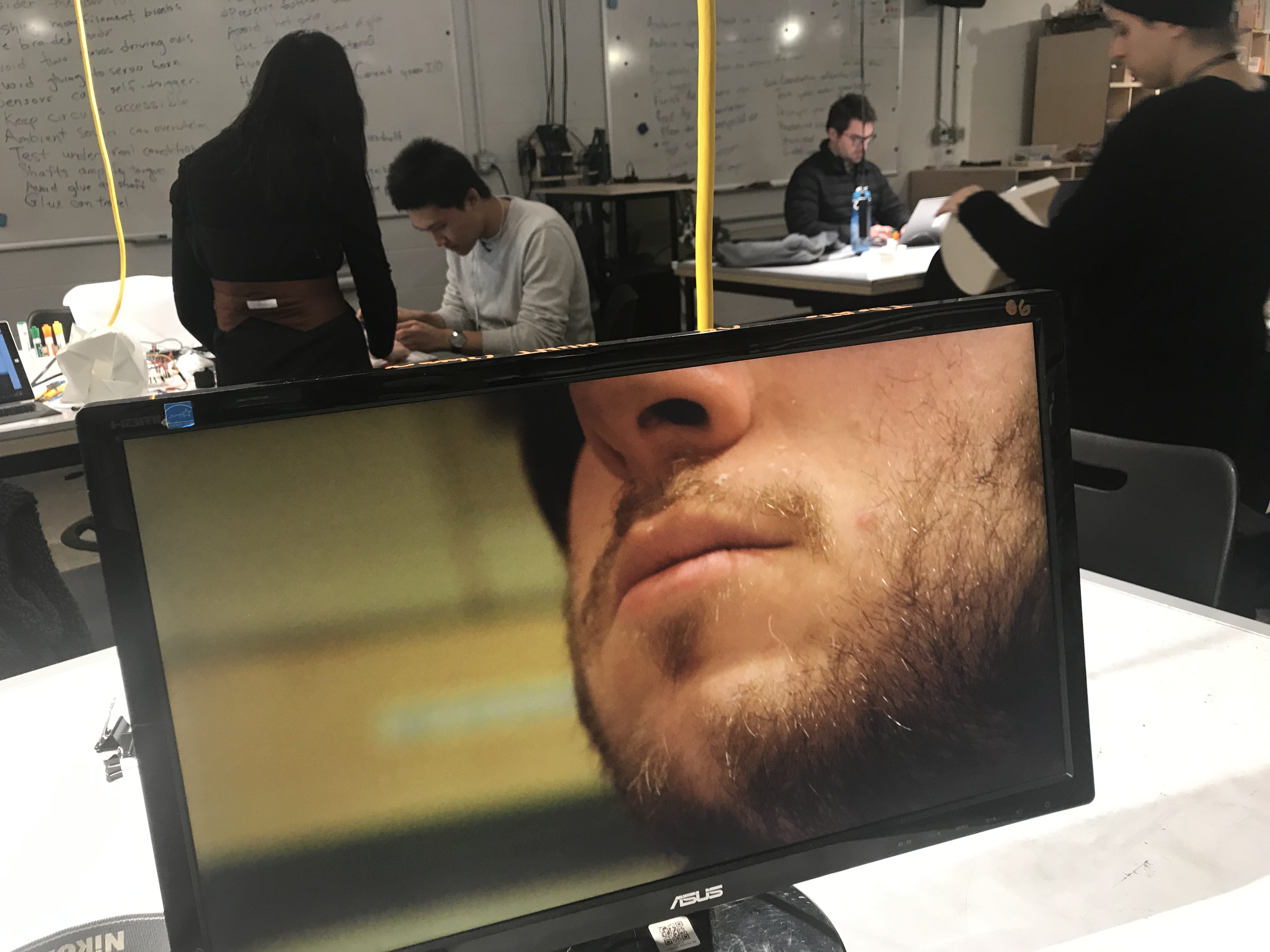 The angles used in the training when I did not have a tripod were a bit more interesting to me. 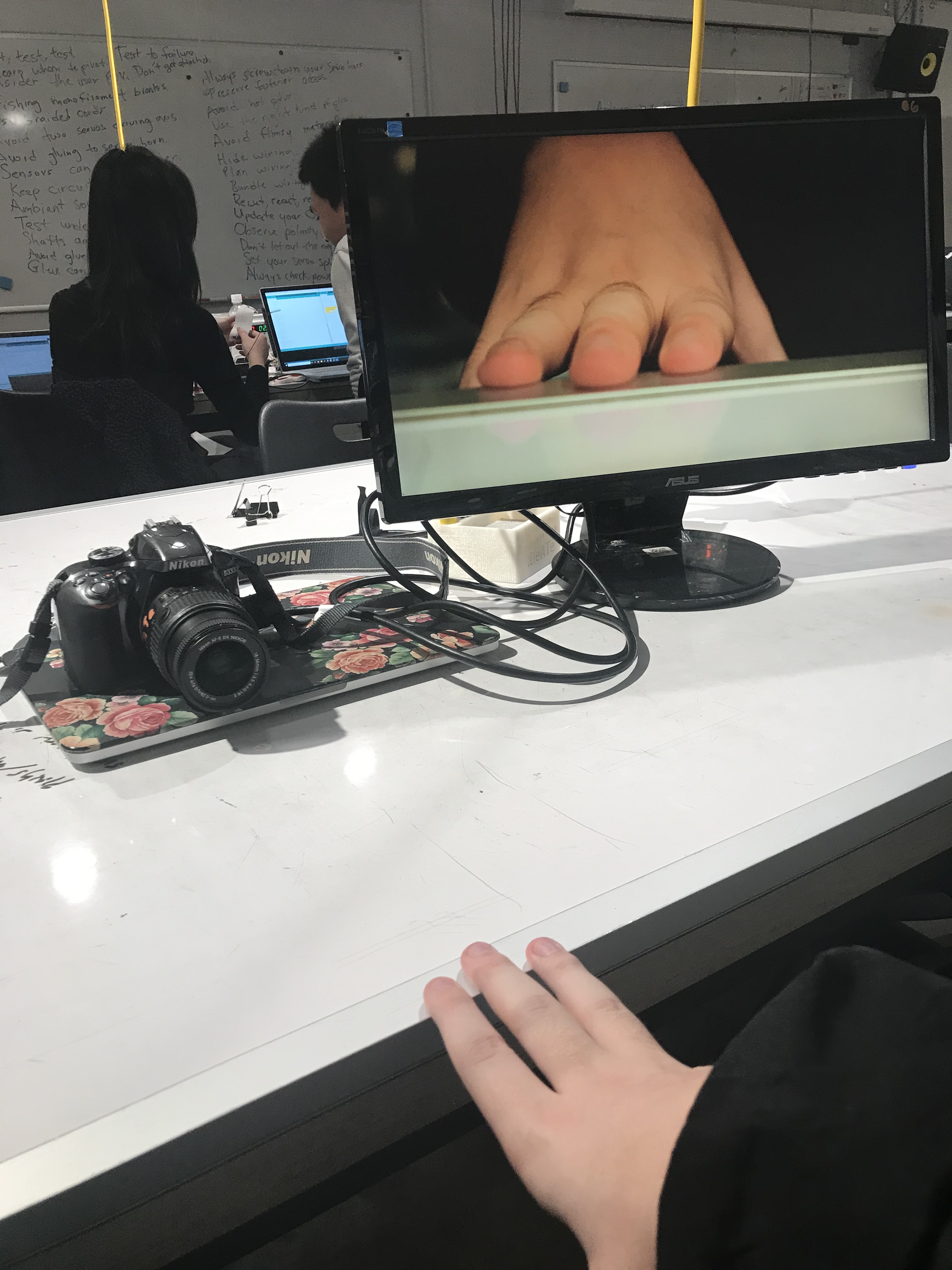 Fingers are a very strange thing to film, especially to keep them in interesting shapes. I probably would not make them the only other subject besides my face if given another crack at this.