Inspired by the Giant’s Causeway in Ireland, we arranged 300 white cylindrical candles into a mountain terrain formation that reacts slowly to audience interaction. Users were invited to light candles and add dye chips (choice of 8 colors) to pools of melted wax, shaping and coloring the terrain. The terrain “erodes” and transforms organically throughout the night as a result of the collective contributions. Our piece acts as a memorial of the community experience of creating something. A projection on the ceiling of CFA’s Main Hall streamed live video of the piece and users interacting with it, encouraging those inside the hall to come outside and contribute to it as well. 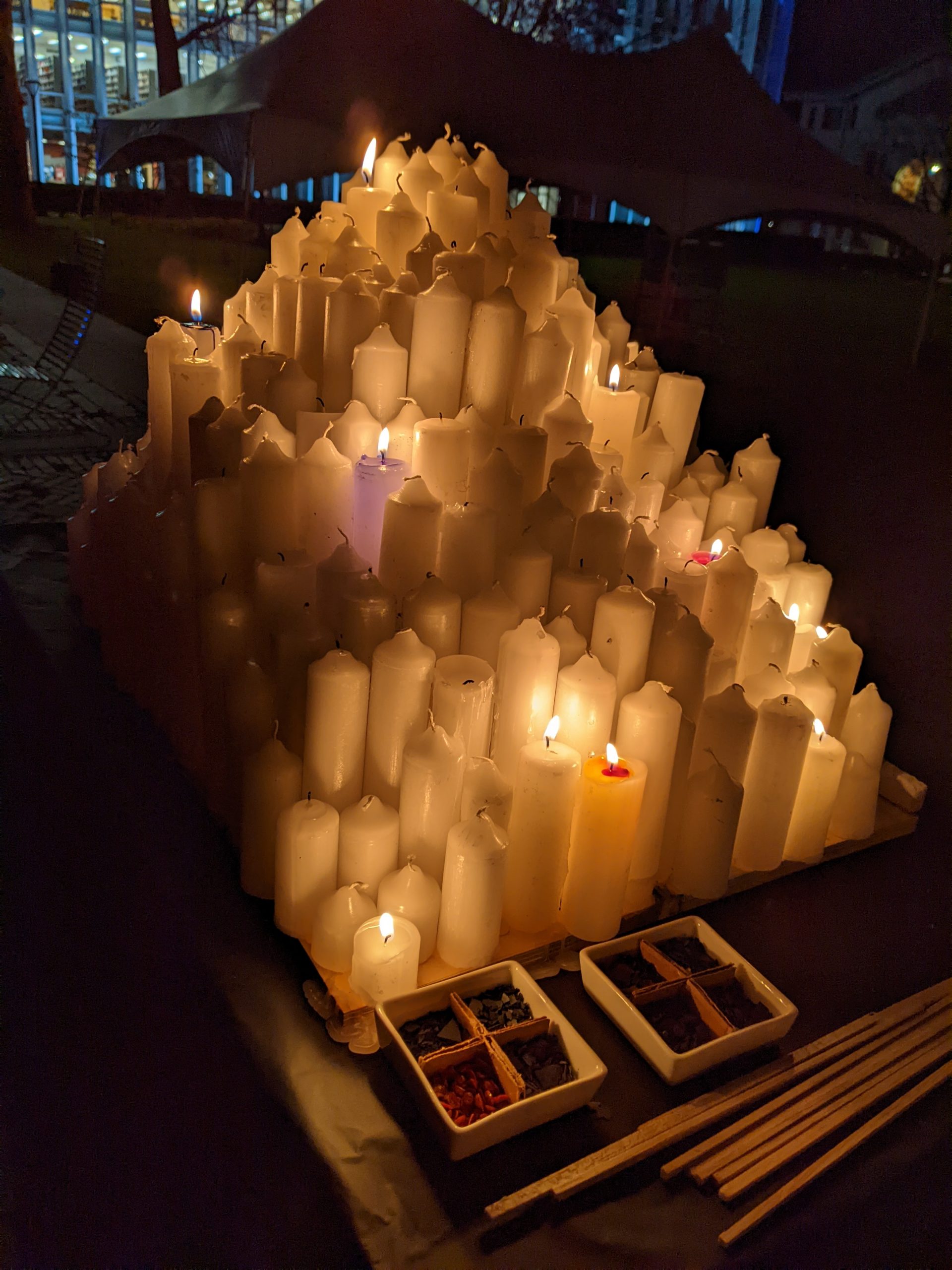 Early in the exhibition. Only a few candles have been lit and dyed. 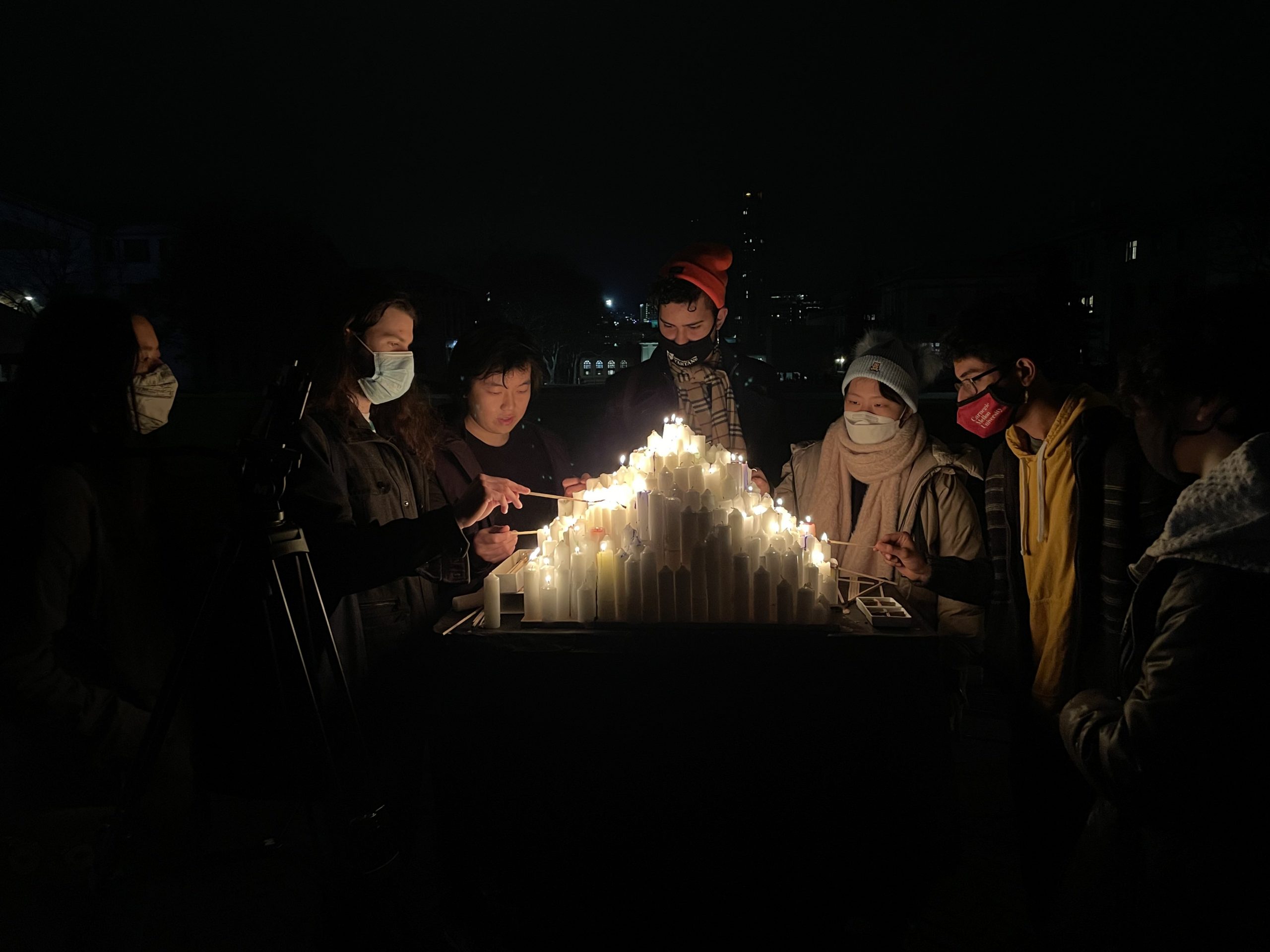 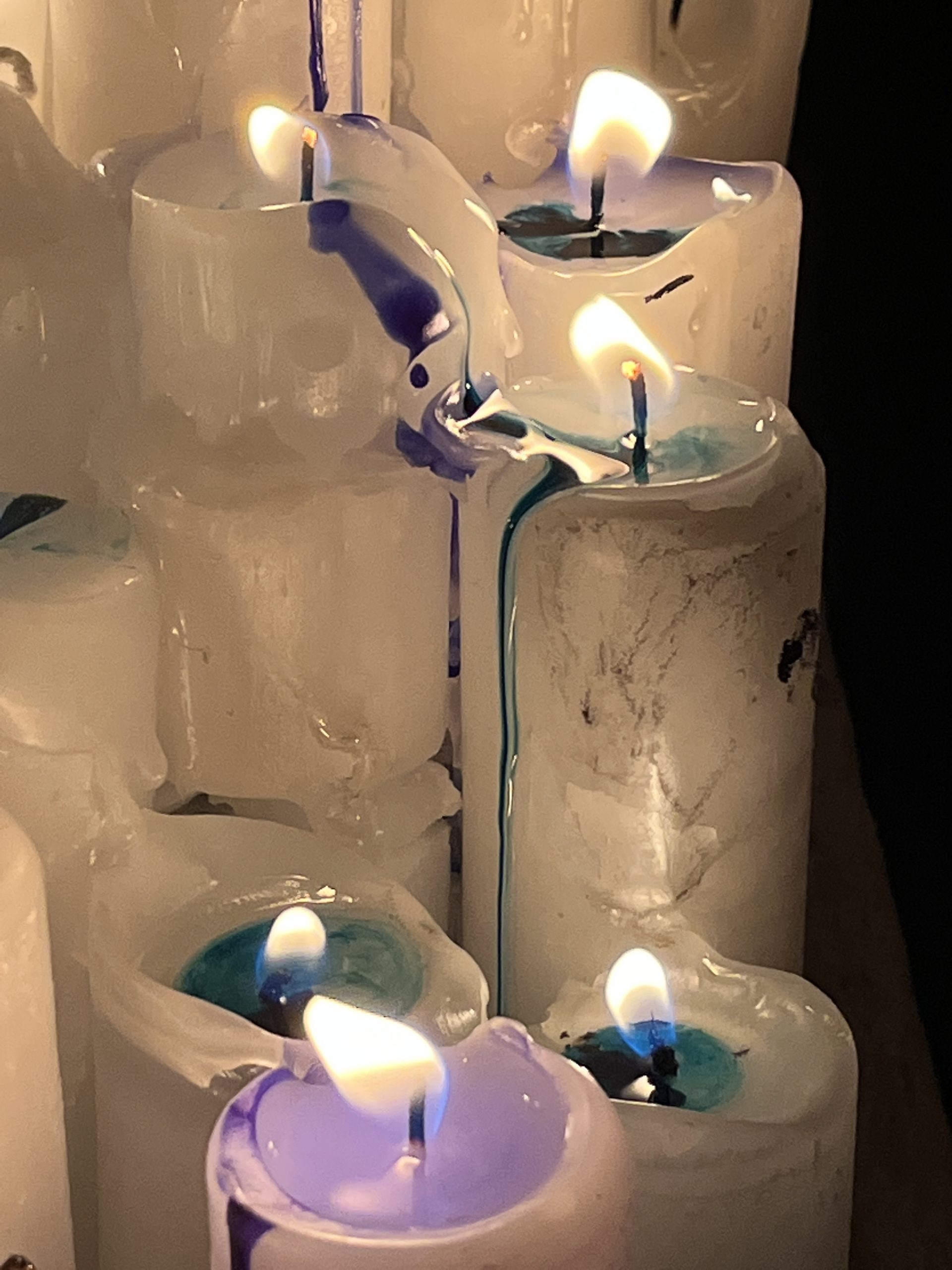 Close up of the lit candles and how the dye flows with the melting wax. 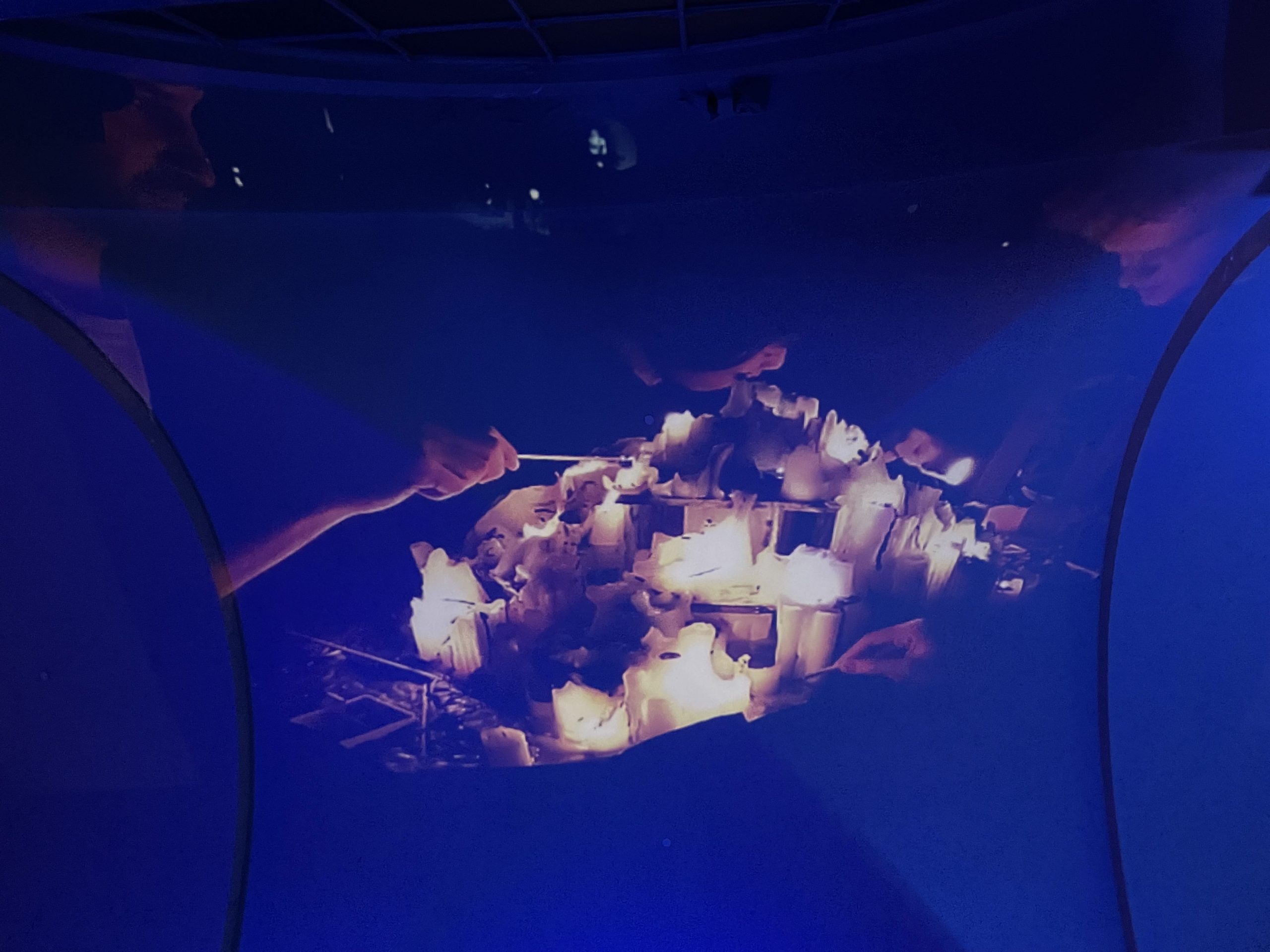 Projection of the piece in the hall. 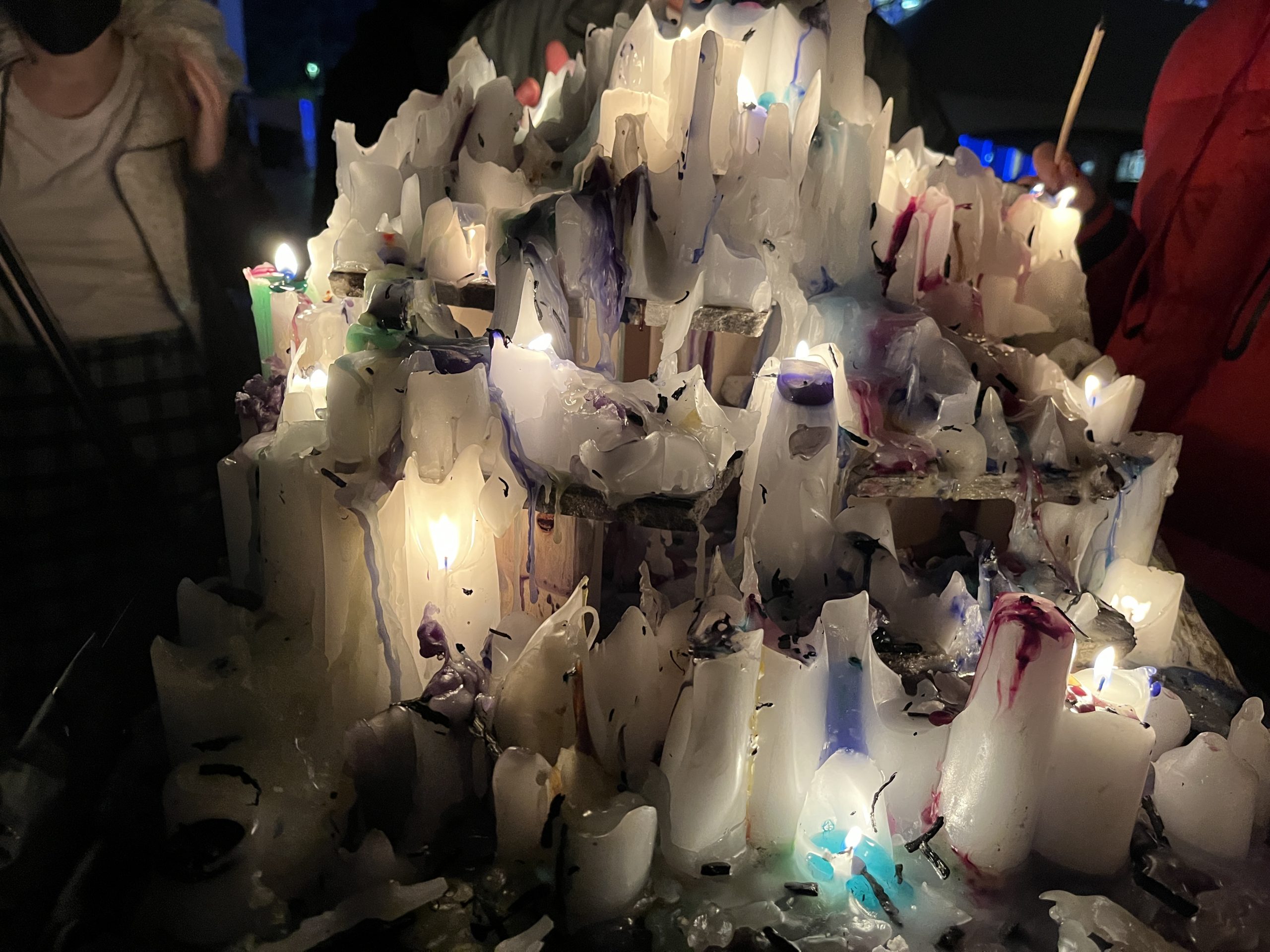 The piece near the end of the exhibition. 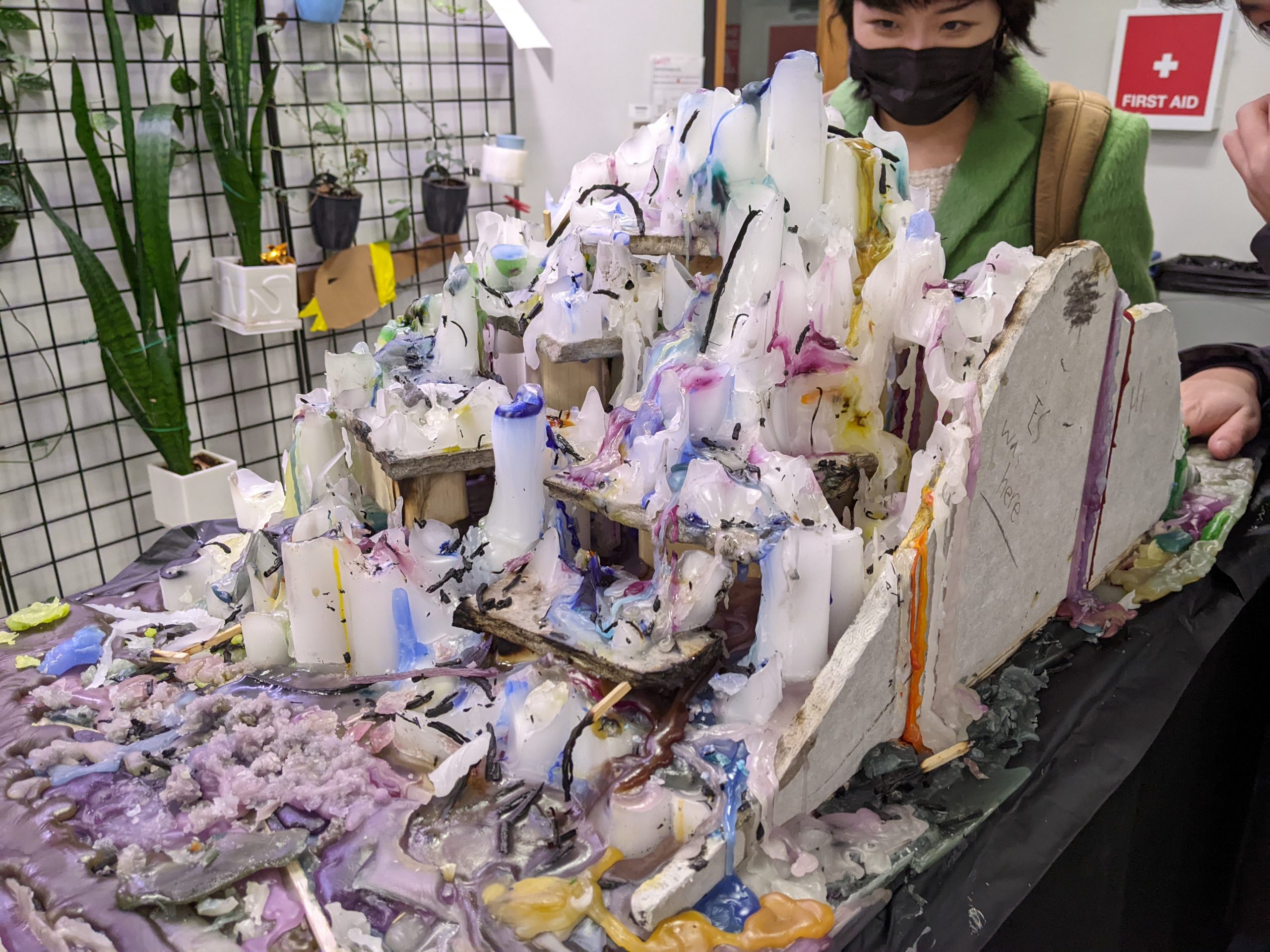 Final results after the entire exhibition. 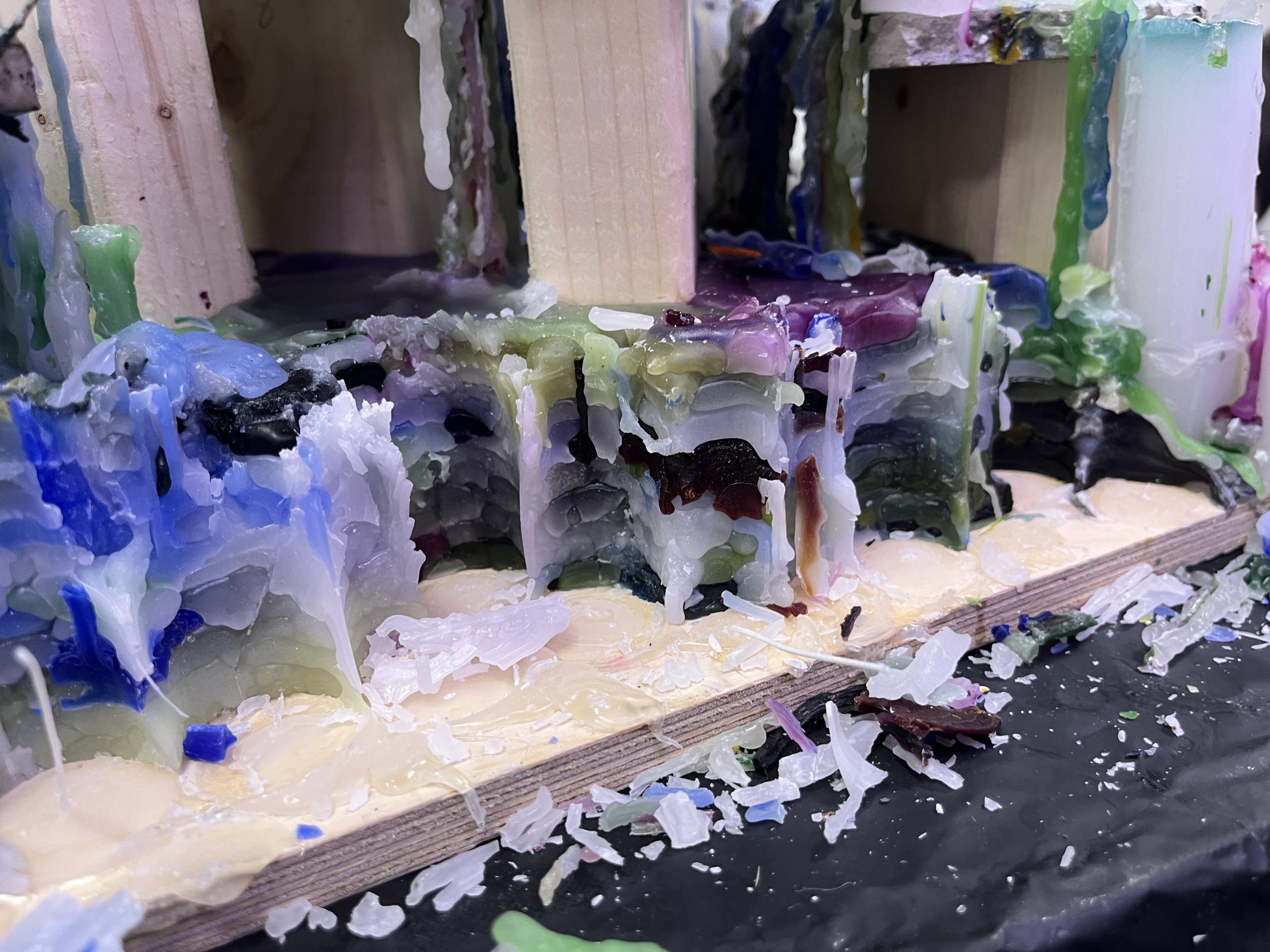 As the dyed candles melted, the wax built up, creating interesting layers and formations. 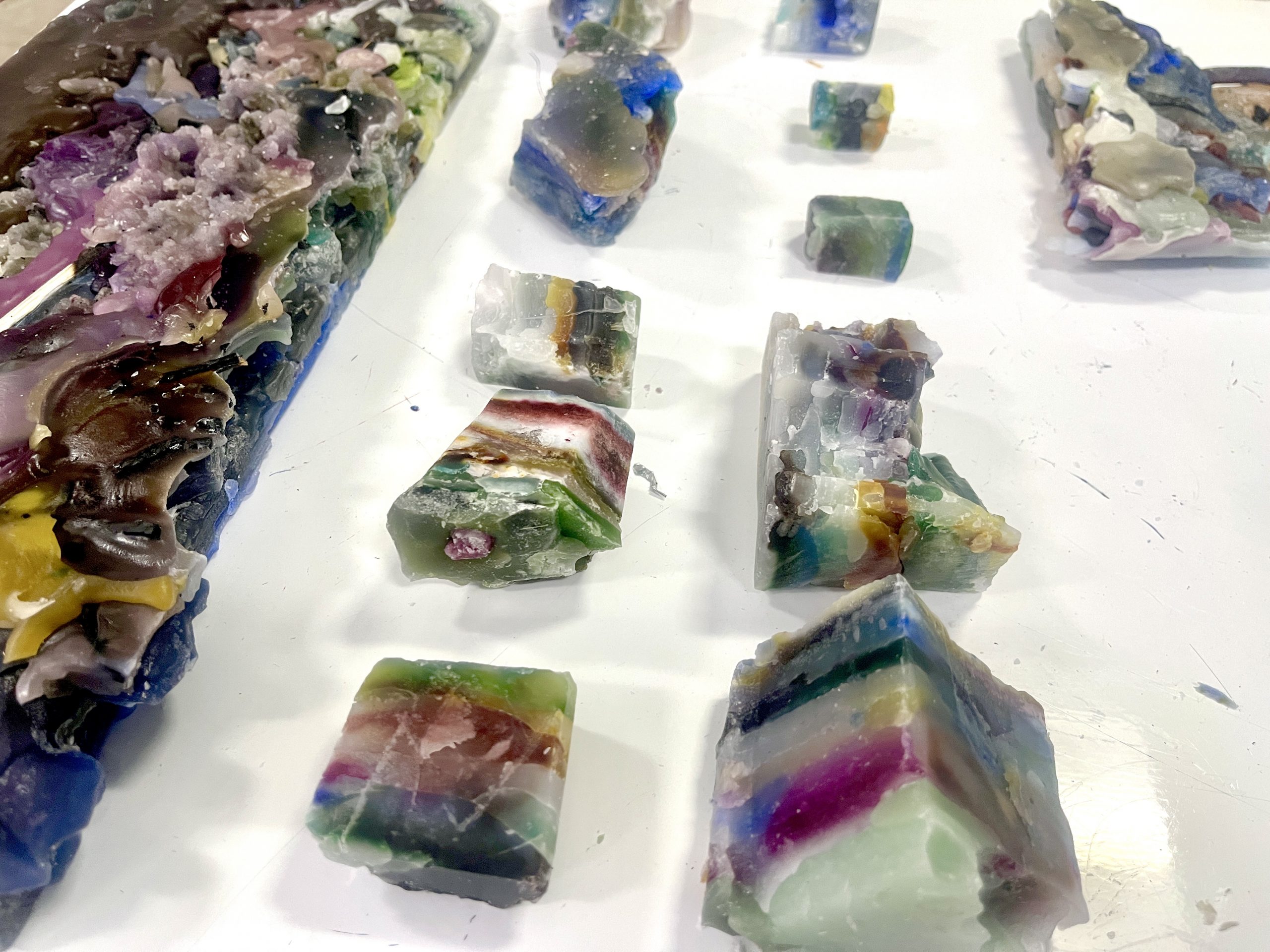 Chunks of colored solidified wax and their patterns.

Time lapse of the piece over the course of the event:

We experienced some setbacks while assembling our project, and had a few lucky breaks in our final, public installation. 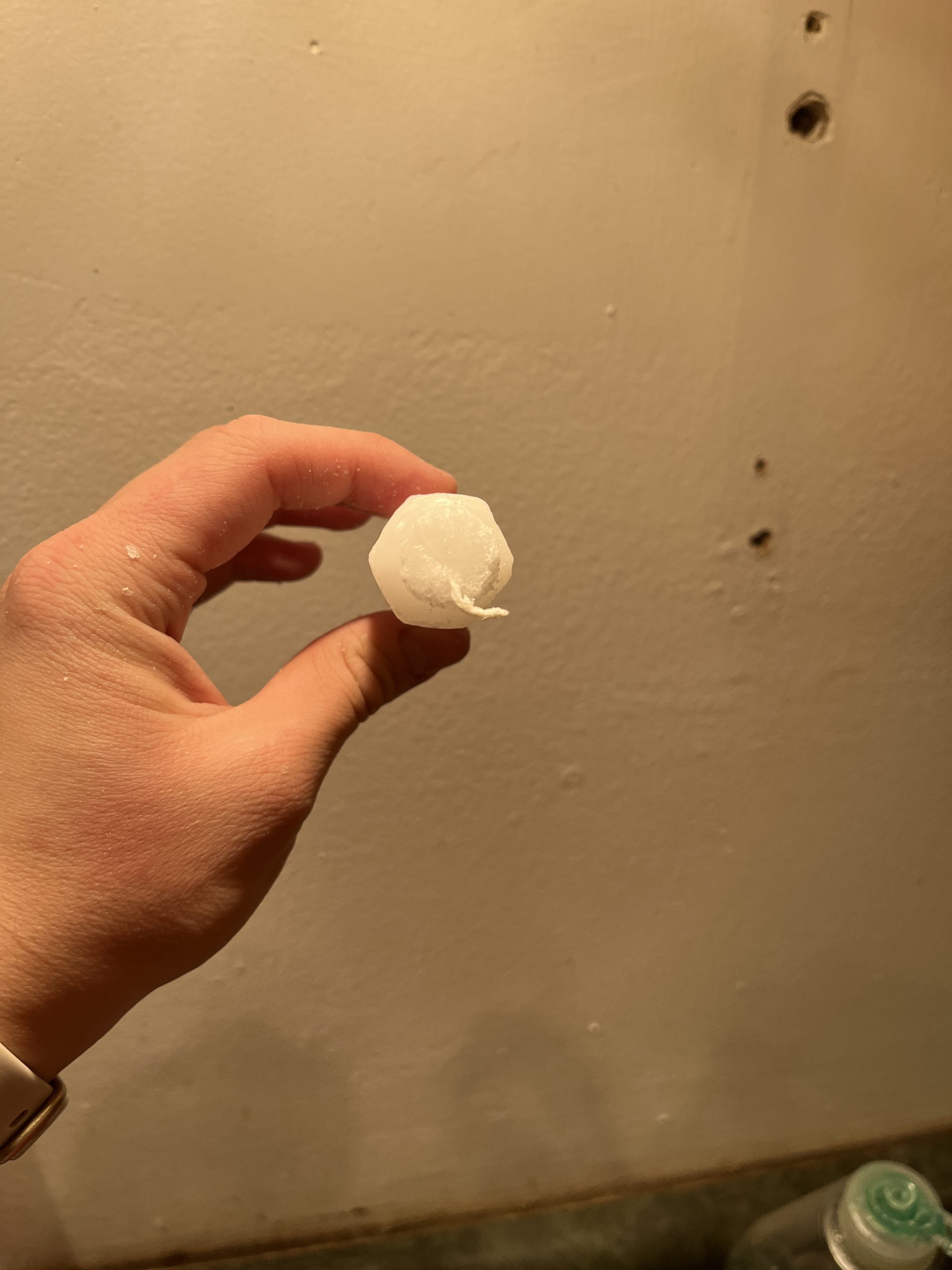 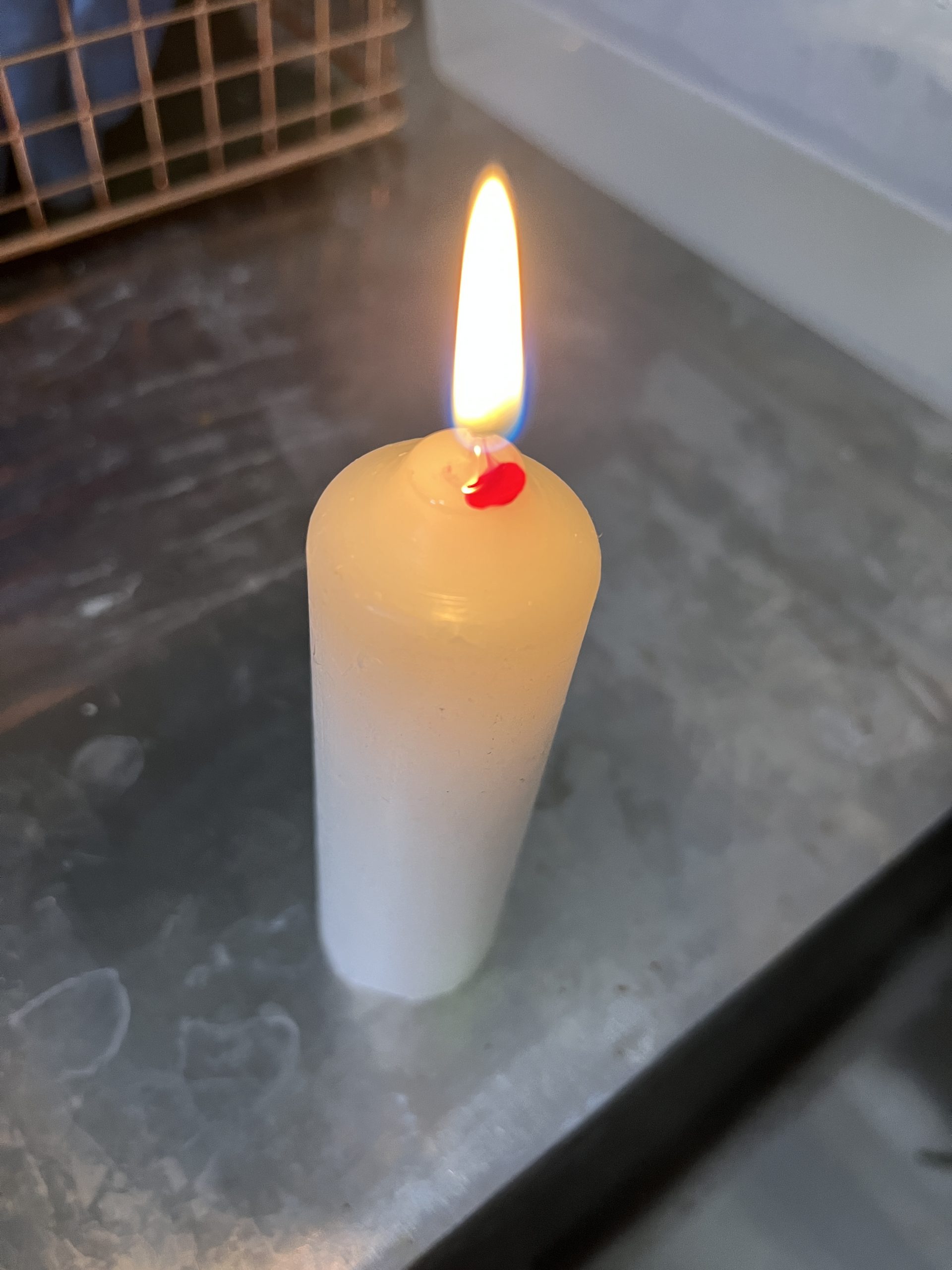 We initially planned to imitate the shape of the columns in the Giant’s Causeway exactly, filling a 24”x36” rectangle with about 250 pounds of hexagonal wax candles. This initial plan’s footprint downscaled to 18”x24” when our proposed budget went above $300, and the hexagons had to be rethought after we had trouble finding thin candles in that shape.

Since we wanted a large “mountain” terrain, we needed a decently-sized base to build on. Using images from the actual Giant’s Causeway, we calculated that the height couldn’t go over ⅔ of the longest base or else it’d look weird. We did our initial planning using this metric plus the height of the tallest bulk candles we could find. This design turned out to be ~200 pounds of wax, which seemed unwieldy and needlessly expensive. We chose a smaller base, and someone came up with the idea of using platforms on the inside so we could avoid making the entire mountain out of solid wax. The project seemed reasonably priced at this size, and would still look proportional when built.

At this point we were still planning on creating a bunch of hexagonal candles from circular ones. In initial plans to make the hexagons, we thought about methods like using long, hexagonal PVC tubes as molds (sold only on Alibaba, so shipping took too long), 3D printing or silicone molds (really slow), and cutting candles down to shape (slow, bad quality). Each of the mold approaches would have taken several days of boiling, pouring, casting, and cooling, and cutting each one seemed silly, time-consuming, and dangerous. Not to mention all the inevitable quality problems with manually making all our own candles! We settled on buying circular candles and pushing them through a hexagon cookie cutter. The cheapest site we could find sold 200 candles for $80, and we needed around 350 candles post-cut to fill our platform.

We placed the order right before everyone left for Thanksgiving and waited with bated breath. When we returned, we found the candles were of the expected size, but did not realize that the quantity was wrong. To make hexagons, we created a prototype cutter using wood, epoxy, and bent sheet metal. This rig could cut warmed candles by simply pushing them through by hand. While testing the candle cutter, we noticed that we were missing around a hundred candles, which meant we would not be able to fill our base with hexagons. Especially since they shrink and pack closer when cut. Our hexagon idea died here, and to everyone’s relief: the hexagon tile cutter took a lot of force! Going with the cylinders saved a lot of time and looked almost equivalent, but we still needed to adjust the heights of every candle. 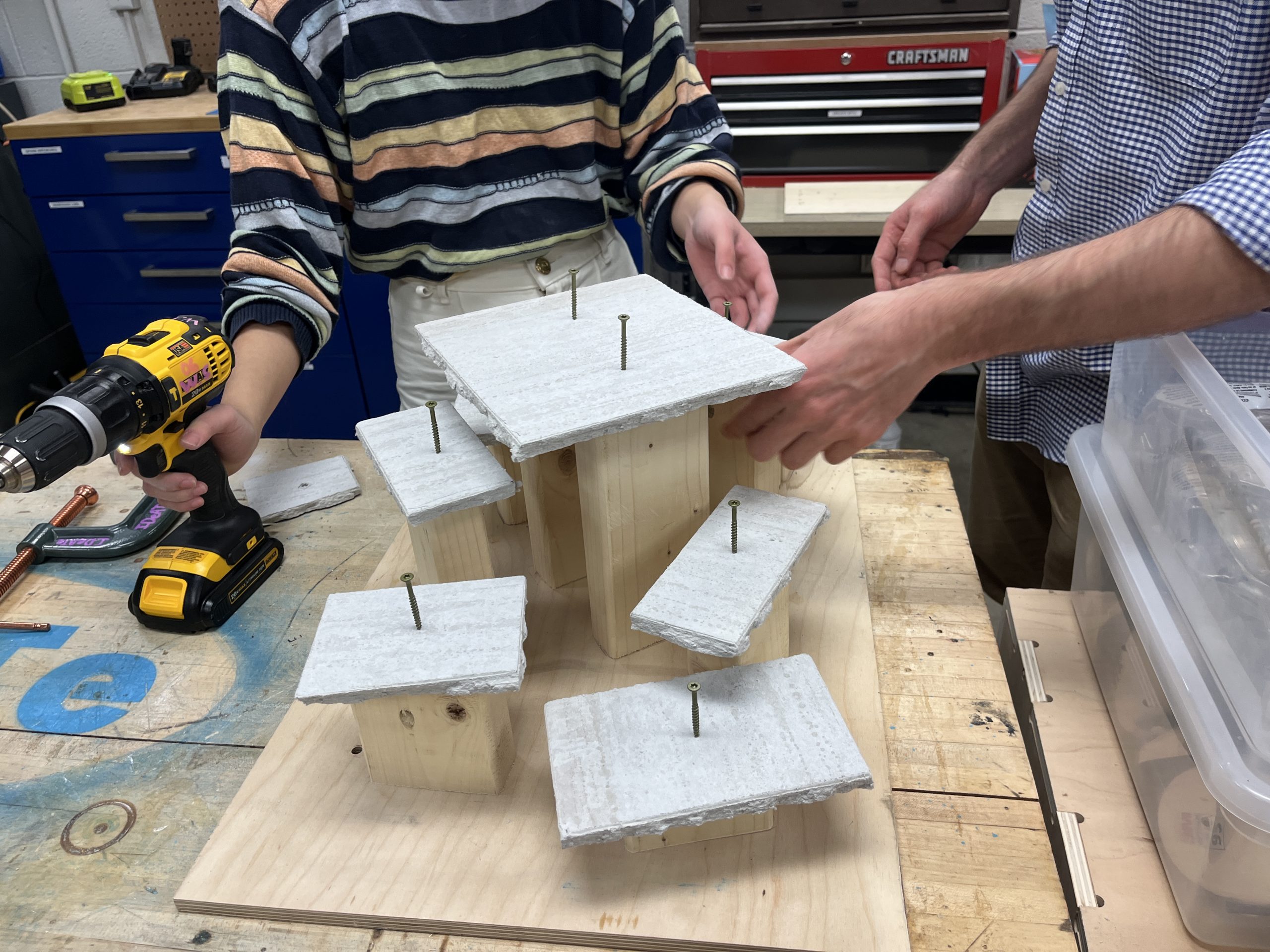 Screwing the cement board platforms into the wooden supports. 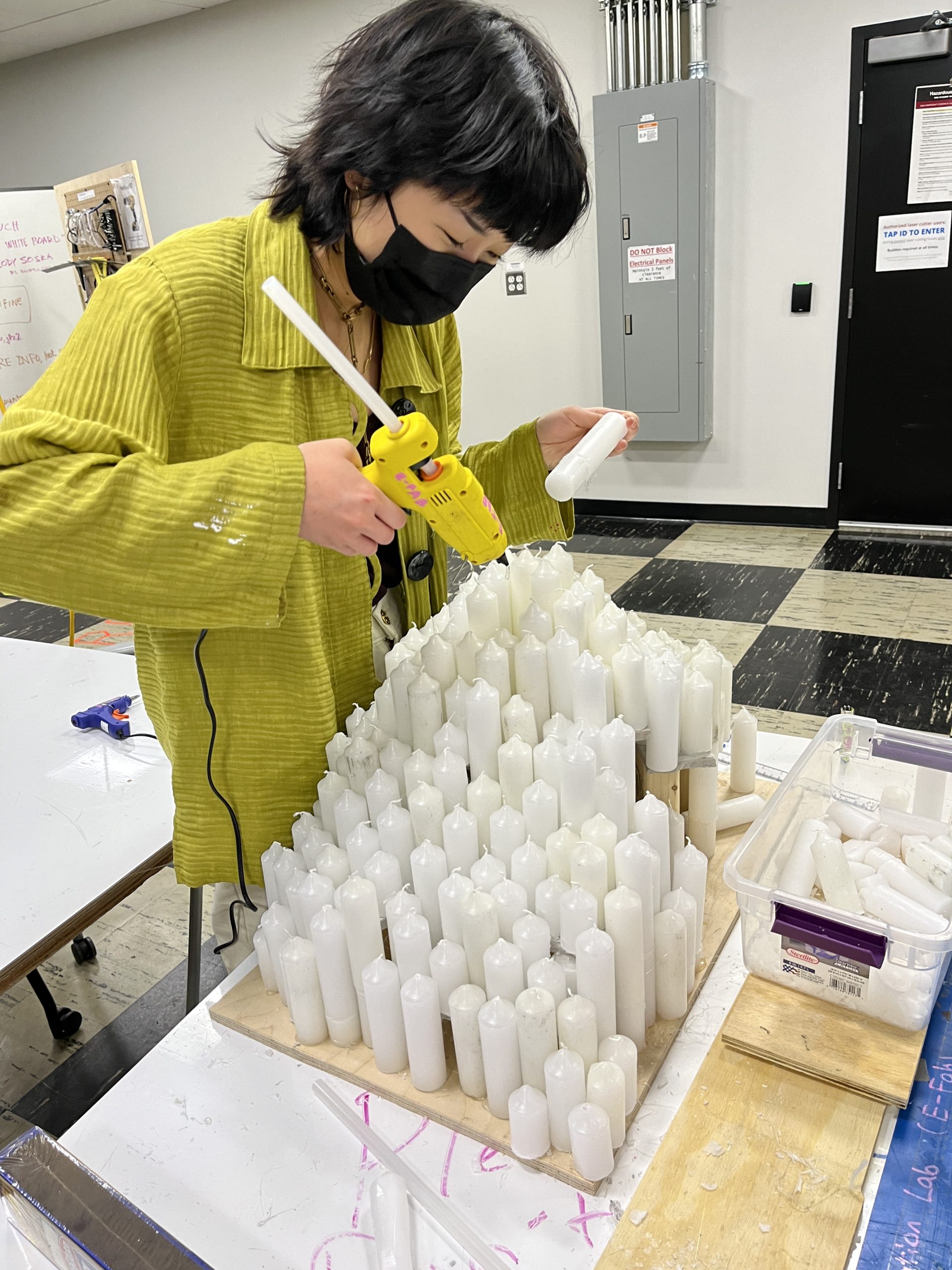 Gluing the candles into place. 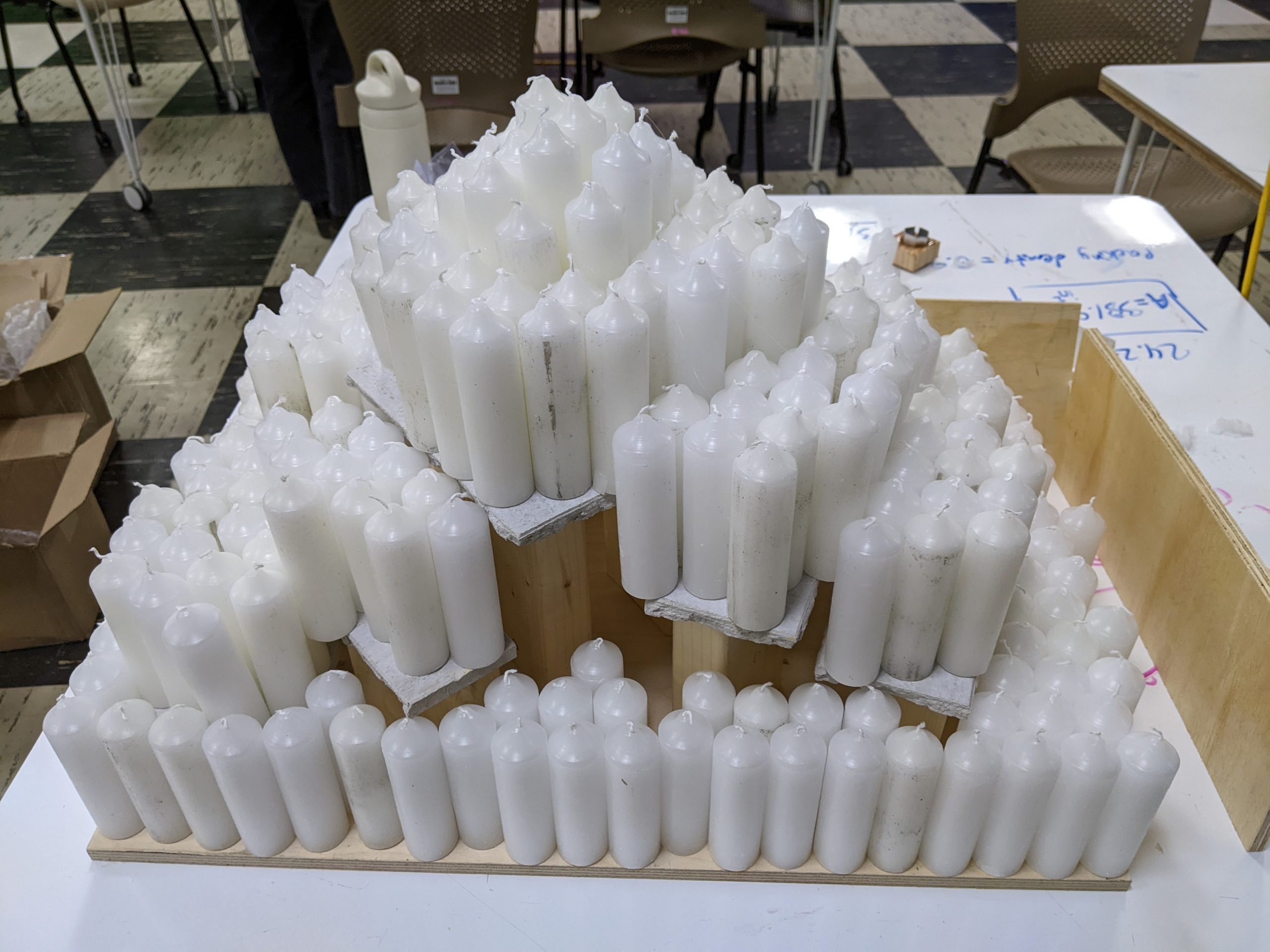 Just started the cutting and gluing, so only the top candles have been worked on. The rest of the candles are arranged into place.

Davine came up with a method using a box cutter and rolling it over an end of the candle until it cracked off. Cut-offs of the base could be glued onto another candle, and allowed us to vary their heights for a more organic look. We used hot glue to put them together, then used it again to glue the entire candle to the platform it was sitting on to secure the mountain.

While the mountain was being built, some of us prepped the platform and cart for the final installation. The base is a large sheet of plywood with standing segments of two-by-four drilled into it; on top of these lie the platforms. Since the platforms are wick-level with individual candles, we chose to make them out of a non-flammable material. Luckily, Zach had some cement board that was perfect for this. We scored it with a carbide knife, then broke it by bending it. 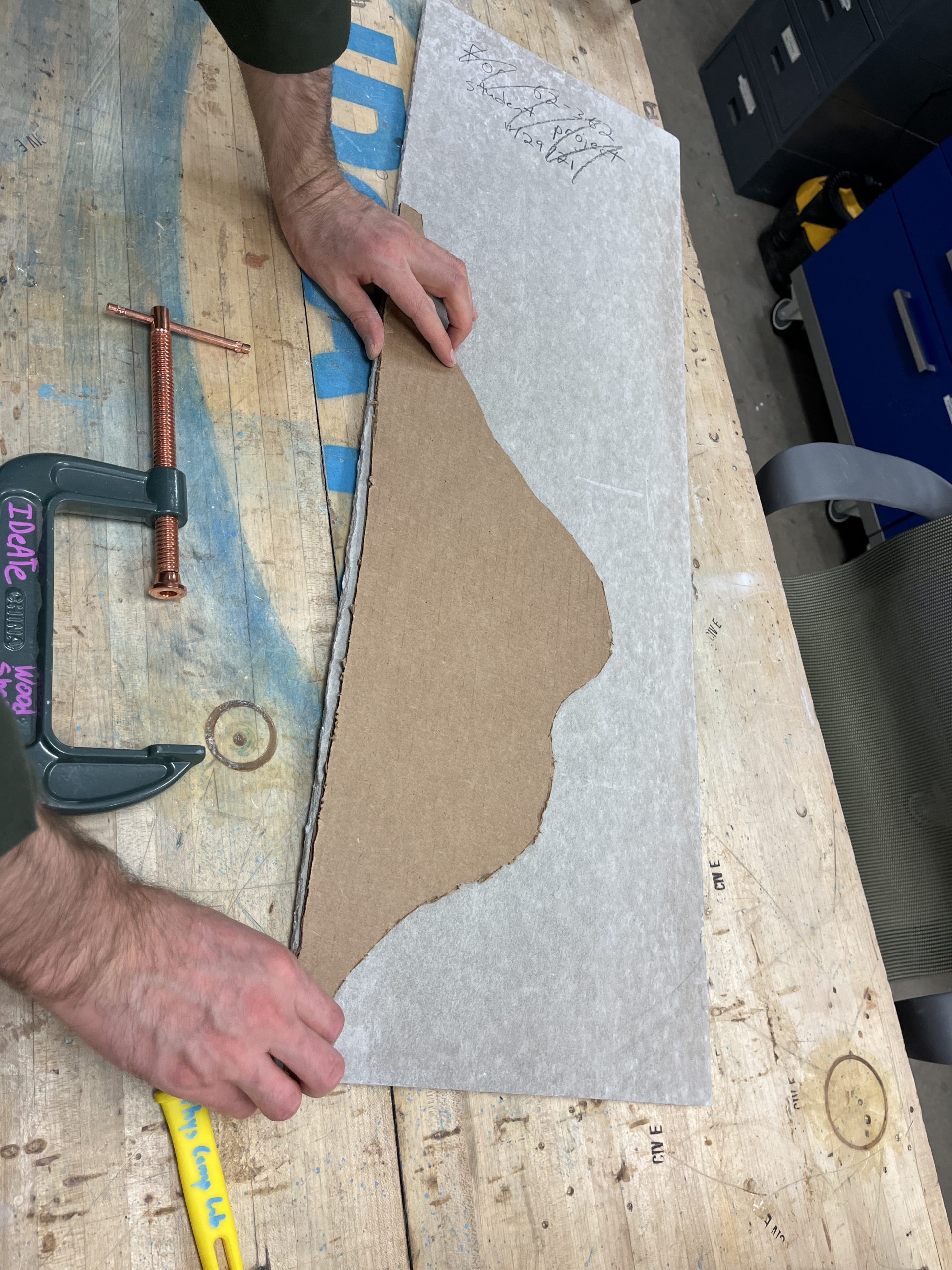 Breaking the cement board into the mountainous back of the piece. 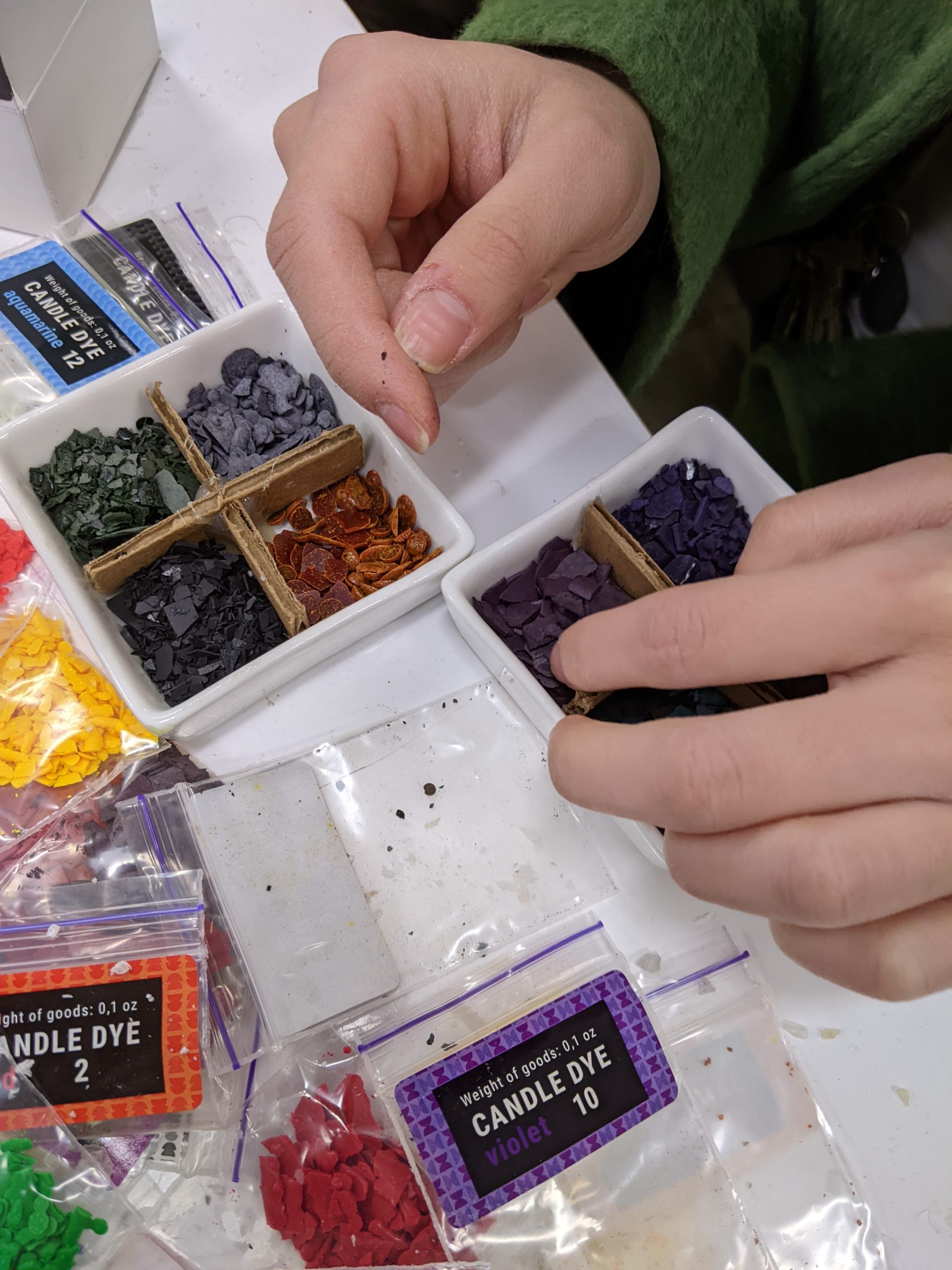 Created cardboard separators for the dishes and put the dye chips into them.

We also used cement board later to fill in a large gap when we found out that we didn’t have enough candles to cover one side of the mountain. Once all the platforms and wood bits were screwed in, we co-opted Zach’s rolling cart to carry it to CFA. We put a cloth canvas over it, then another solid sheet of black aluminum foil on top of that to catch any stray wax strips. This turned out to be invaluable later. When we finished assembling the mountain, we carefully carried it on top of the cart and placed it over the aluminum protection layer. Leah and Davine made holders for the dyes, and Zach gifted us these long matches that were in his house for the participants to light candles with. 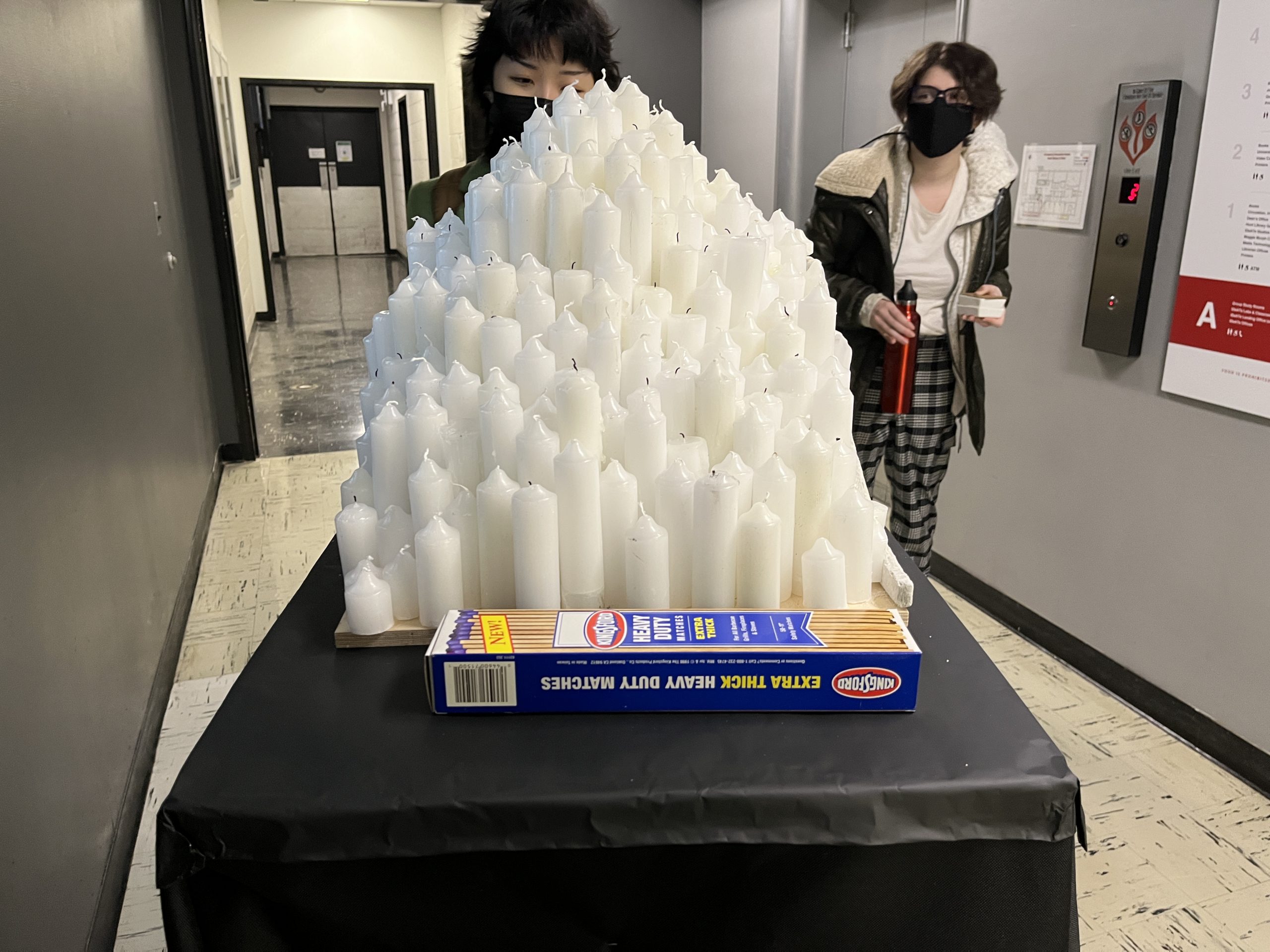 Everything is finished, and we’re heading out to place it at our exhibition.

Once every gap was filled and no internal structure poking out, we wheeled it over to CFA. We lit a few candles first just to show people how to interact with our mountain, but most people had no trouble at all figuring it out. Lots of people came by and lit candles, most adding dyes and watching the streams. We did not anticipate the wax “rivers” that would form from flowing dye, but those were very mesmerizing. We also did not expect the wax from 300 candles to begin leaking into the internal structure, and it started leaking out onto the platform. Here’s where the aluminum came into play; we were able to round up the corners and contain the wax without dropping it all over the ground. While it did not save Zach’s pants, we later found that the buildup of wax layers created many beautiful colors arranged across different layers, much like a sedimentary rock. The dyes worked great. Mother nature felt kind that night, and it wasn’t too cold or windy for the most part. It even helped; the inside was so cacophonous that many people preferred to be outside anyway. Davine put together a last-minute project setup, streaming from outside onto the ceiling in the Great Hall to remind everyone inside that we were outside. Overall, everyone who came by had a great time lighting and dying candles and what it created was truly beautiful.