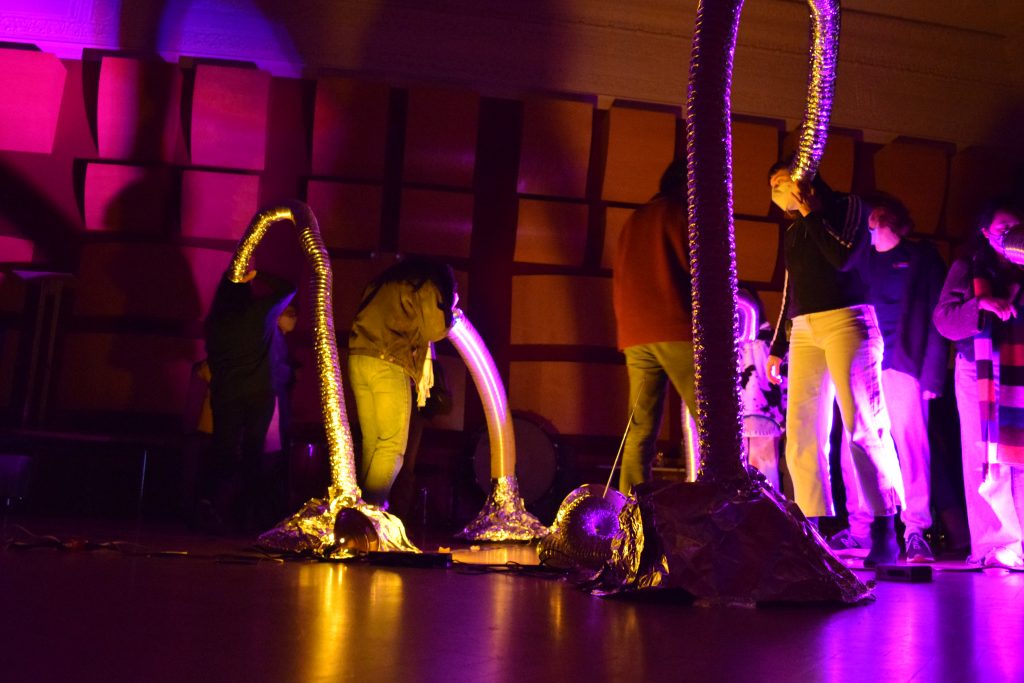 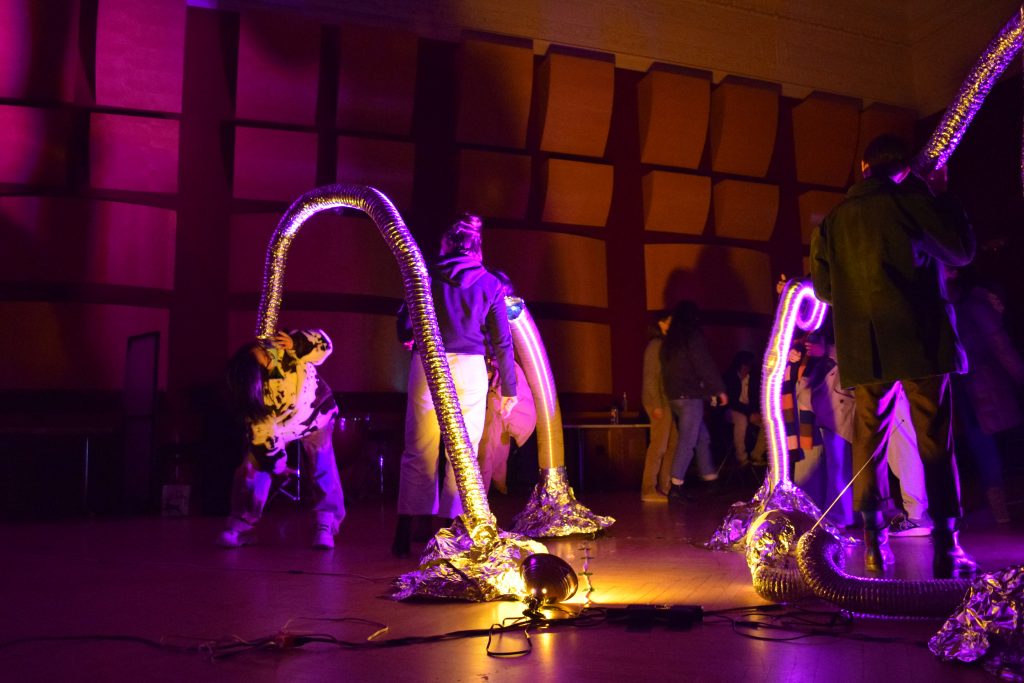 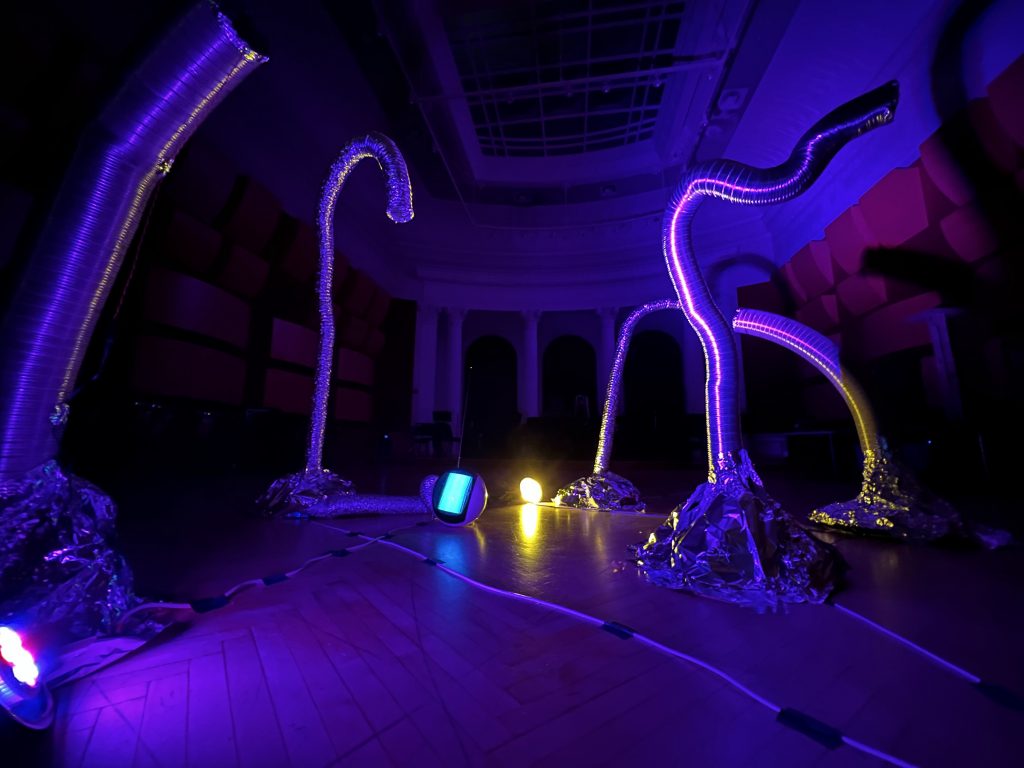 close-up of the melon

A parasitic pipe organism has taken over CFA. The pipes spread through the walls from the Alumni Concert Hall, where they collect and display video and audio information for visiting humans to hear. These ducts emerge from the floor in all of their aluminum glory; some are more bendy and allow the humans to pick them up to listen, others are self-supporting. The pipes allow humans to experience the goings-on of the main hall without all of the busyness, and also allow them to experience performances from various locations all in the same space.

Hints of the CFA pipe infection was first discovered by Henry Hornbostel himself in May of 1923, but it wasn’t tracked until the late 1980s when a group of paranormally-inclined students decided to track and journal the progress of the spreading infection. They called themselves the “Brazil Pipe-Watching Society” or BPWS. At the time, the infection was contained entirely inside the walls themselves and the organism’s data-transfer capabilities were limited to crude acoustics. In the late 2010s, the organism became capable of mimicking CCTV video surveillance systems, and small video-capture pipes burst through the walls into the main hall. Around this time, a government research team from Southern New Zealand happened upon the student journals and decided to investigate for themselves due to fears for the confidentiality of New Zealand’s rich and secretive subterranean avocado industry. In December of 2021, the organism’s heart suddenly burst forth through the floor of the Alumni Concert Hall, where it had been growing dormant for nearly a century. The New-Zealand researchers responded fast, and fully eradicated the organism from CFA, much to the dismay of students of BPWS. Since then, little remains of the ductwork organism, just discarded foil and limbs which will safely remain in Hunt A5 for many years to come, or until Zac gets annoyed. 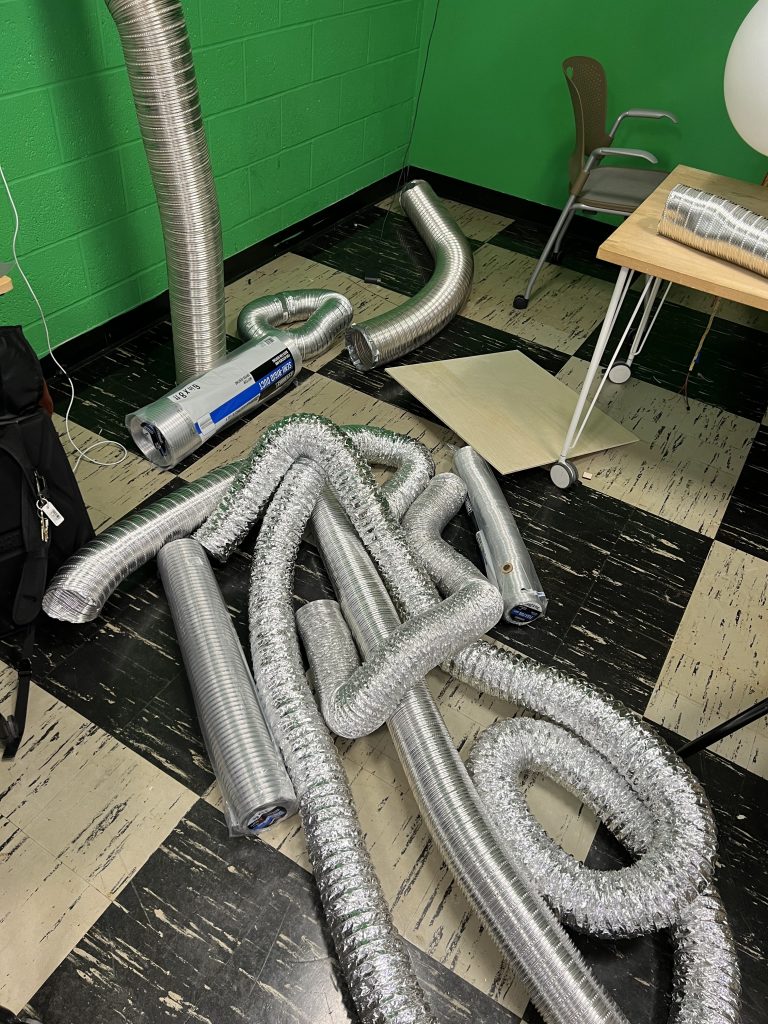 we got the stuff !

Mockup of pipe bases, includes both the less flexible and flexible ducts

planning out the final layout 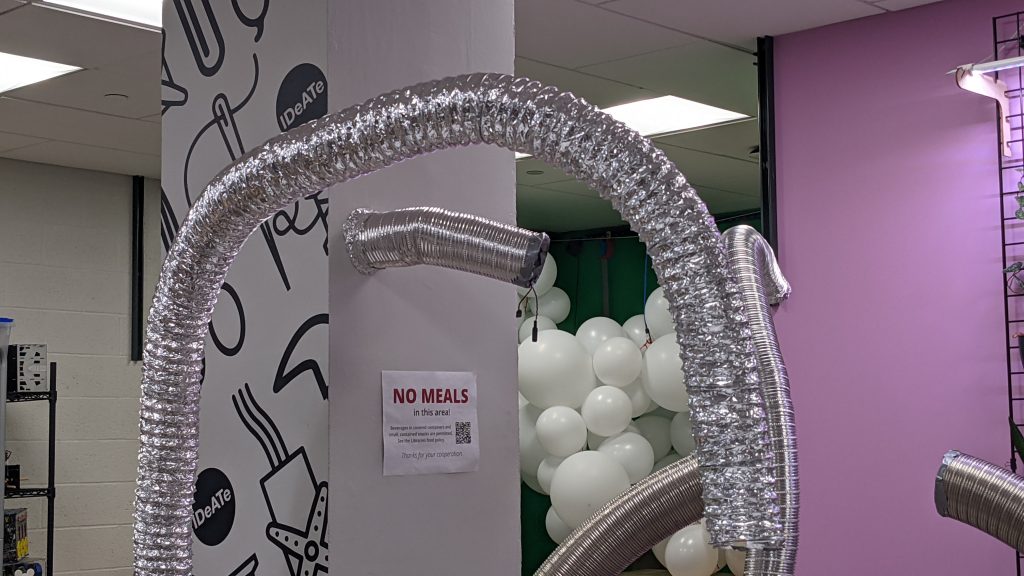 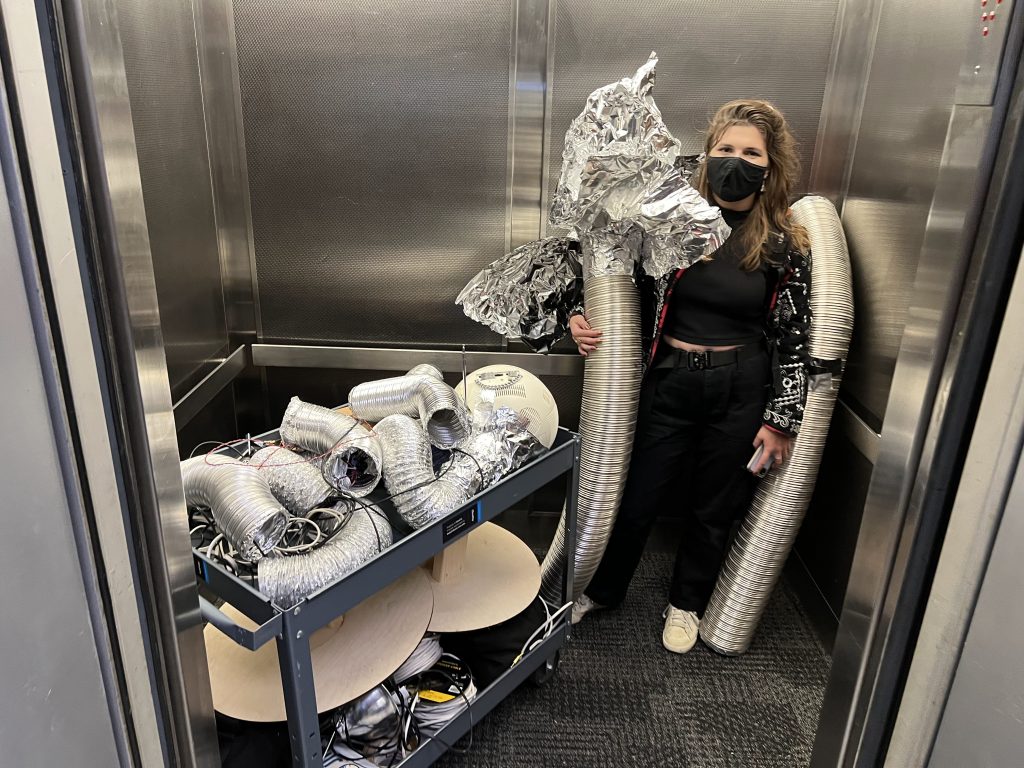 on the way to install everything

The process was highly reflective, primarily due to the extensive use of aluminum foil and reflective tape.

We ended up being very happy with the design concept for the installation, but struggled a bit with execution. We were able to set up all of the pipes, but a large portion of the installation’s electronics failed. A major issue we faced was just lack of time towards the end, mostly because we changed concepts a few times leading up to the installation week, and didn’t have enough time to properly test everything before the final install.

The installation process itself ended up being far more chaotic than we expected, primarily because we didn’t have room access until the show was actually happening. The scale of the other installations was larger than we thought, so testing the camera/microphone pipes and running wires while the show was happening was really difficult.

The electronics turned out to be very difficult mostly just because of scale. An audio cable is easy, but 300ft of audio cables is not. In the end, a lot of little bits failed because they were rushed and we didn’t test in the actual setting extensively enough. The audio cables were likely shorting occasionally which would kill the microphones, and the thick walls of CFA made the video signal on the melon too weak to work (the vertical/horizontal sync just refused to work if the signal wasn’t really strong). Ideally we would have tested all of these things beforehand, but because of time we could not.

We did however learn that even if your thing doesn’t work you can still show it as long as you have good lighting, which we were lucky enough to bring along with us. Although it definitely would have been even cooler if everything functioned, people still enjoyed looking at the project, which is definitely some form of success. Two of the video feeds worked which was great, but the audio breaking was super unfortunate.