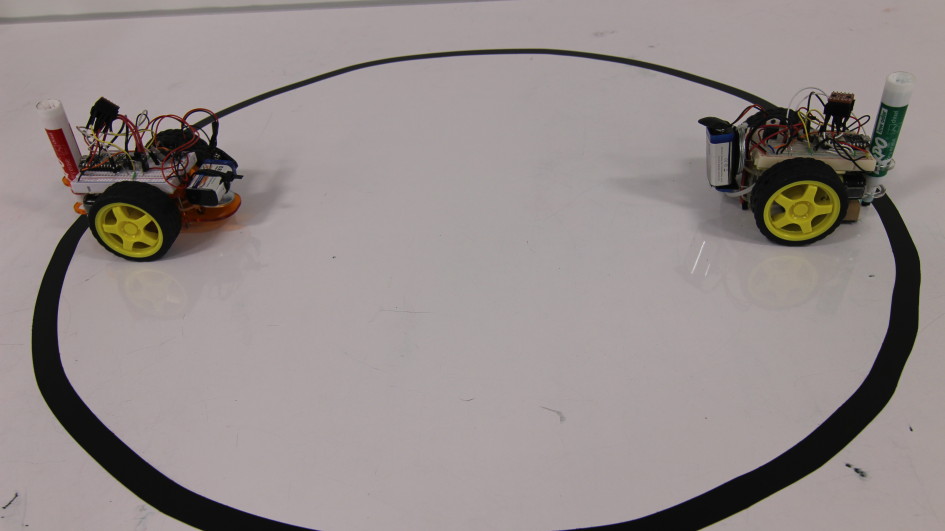 Sumo Bots are a pair of miniature robots looking to wipe the opponent out of a small arena. Inspired by a conglomerate of robots that are put in combat with each other, these Sumo Bots are able to recognize the sumo ring to adjust and avoid being pushed out by their foe. They trace their path around the ring, while a dry eraser mounted on the chassis, erases the path of its opponent. These battery powered robots are created with simple laser-cut chassis, Particle Photons (powerful, Arduino-like, wifi-enabled microcontrollers), DC motors and sensors to control the motions of the robots.

A sumo robot that uses a flipper to help get its opponents out of the ring.

A complete kit sold by Parallax at $135 for one, and $225 for a complete kit. It uses BASIC Stamp control boards and comes equipped with servos, QTI line sensors, and other components all mounted on an aluminum chassis.

A sumo robot who uses extreme speed to knock its opponent out of the ring.

Each sumo bot used two DC motors for movement. A white board eraser was used as a third point of contact with its terrain, allowing the robot to balance and move easily while performing the erasing task at the same time. To hold everything together, we sandwiched the motors between two plates of acrylic. Additional acrylic pieces were included to hold the motors securely by sandwiching a tab on the motors and securing them with nuts and bolts. We also included holes in the plates that held the marker in place.

On top of the robot we placed our breadboarded circuit. Power was supplied from a rechargeable 9V battery. For the photon’s input voltage, we dropped the 9V down to 5V using a linear regulator. For sensing, we used a reflective object sensor, that was able to sense the line that marked the edge of the sumo ring. The motors required the 9V straight from the battery, so we used MOSFETs to control them. The 3.3V from the Photon I/O pins was not enough to switch the MOSFETs, so we used a level shifter to bump this 3.3V up to 5V. We also included diodes across the motor leads to prevent reverse current from entering our circuit.

To control the robots, we made a basic autonomous program that moved the robot forward until the line sensor saw the line. Then, it turned the robot around to get back into the ring.

The code, schematic, and SolidWorks design files can be found at: https://github.com/arathorn593/sumo_bots_phys_comp

This project was a good way of getting used to the workflow of physical computing and teaching us how to structure our process. The 2 small fighting robots were very different from our original ideas of the project, where we wanted to have a large robot fighting a small robot so that the robots had different personalities. Essentially, we spent too much planning and thinking about the final product instead of executing and prototyping right away.

We were able to adjust focus on making 2 smaller robots that buzzed around the ring and were battle ready. We were able to get them to operate them on batteries so they were able to fight without any wires getting tangled. The build quality of the robot was enough for them to take some hits and keep on running without issue. The robot is balanced well enough for the robot to erase the opponent’s path while writing its own path.

We would have liked to give the robots different personalities and create more of a story with the interaction between the robots. There are also different control systems we considered and would have explore including an OSC user control, and also a system using different sensors to detect the opponents. To reinforce the changes in code and hardware, we would make aesthetic changes to the robots, like vacuum forming different bodies for the robots befitting their respective “personalities.” In the end if we had more time we would have focused on developing more of narrative.