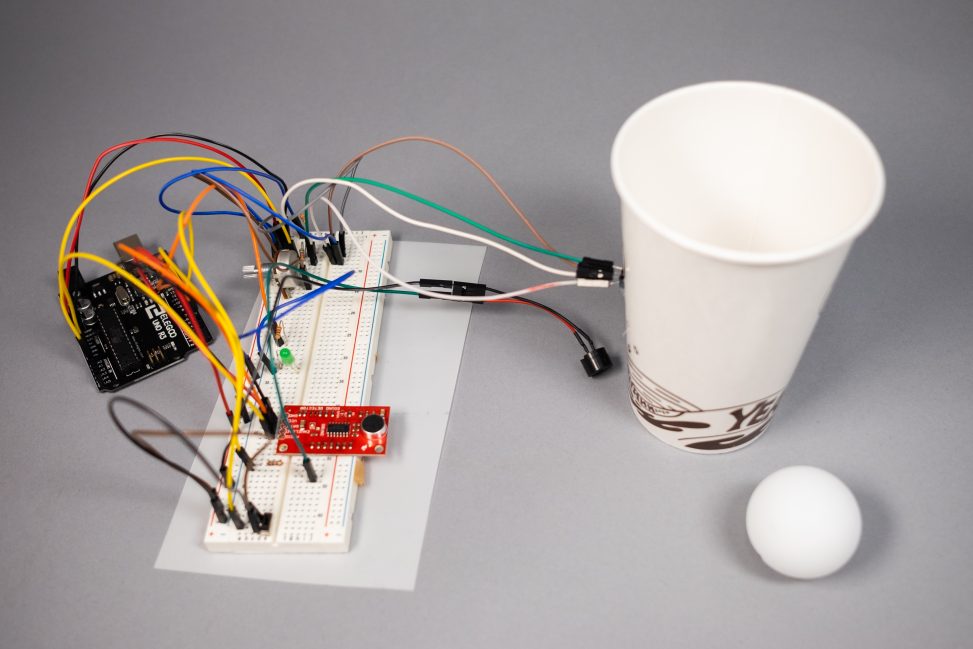 Our easy to play game is designed to help improve anyone’s ball in cup throwing skills. To start a game, a participant flips a switch which simultaneously starts a high pitched sound and a stopwatch. They then pick up a ball or another object and attempts to throw it in a cup. As soon as the shot is made, the game ends, the sound stops, an LED blinks three times, and the amount of time elapsed from the start of the game is displayed on a computer screen.

At the beginning of our project, we very quickly agreed that creating some sort of game which required human interaction to trigger our transducers would be interesting because it extended both the complexity and range over which we could design the product. Having further become very interested in incorporating IR, light, and sound into our project we set about merging our broader project interests with these components in what became the ball in cup game. The process was wrought with several challenging aspects, and yet other surprisingly simple features. Below we discuss highlights from each, broken down into two parts: hardware-wise, and code-wise.

In our initial brainstorming, integrating several components into two coupled transistors via circuits seemed like a daunting task: each transduction piece was unknown to us and required unique circuit logic to parse and reason over on the arduino. For instance, our sound detector consisted of five ports, including three for sound reading: ‘audio’, ‘envelop’, and ‘gate’. Each port captured a different element of a sound, while only a single one contained the information we needed. However, with help from online sources and material covered in lecture, we surprisingly found that wiring up each component was surprisingly straightforward.

Furthermore, we realized that to integrate each component to form our transducers, it was sufficient to set them all in parallel with one another. This observation greatly simplified our final circuit architecture, and proved to be easier to debug than a more complicated circuit.

In conjunction with putting together our hardware project components, we faced several challenges with designing our code structure. Because our goal was to design a game based off of a double transducer, we had to not only tie in each transduction component together to form the transducers and dependencies, but also had to seamlessly integrate other game parts to work in concert with the transducers. One challenging aspect of this was incorporating game state design into our project. Our vision was to have three game states: start, active, and terminal, each which was responsible for different aspects of the game. The role of the start state was to initialize all required components for the game, the active state served to perform all actions required while the game is ongoing, and the terminal state was meant to perform game ending functions. In terms of our code, the start state should initialize the stopwatch, and flags which dictate whether the game was active. The active state in turn should play the sound infinitely and detect if the IR sensor had been tripped, turning off the sound if true (first transducer). Meanwhile, the terminal state should be triggered by the absence of sound which causes the LED blinking series (second transducer) and terminates the game. This required a complete restructuring of our code because up until this point, both transducers were captured in a single if statement which detected whether the IR sensor had been detected. Thus, meeting our vision required breaking apart the transducers into the active and terminal game states, as well adding a new start state as well.

One aspect of our project we might have changed if we had more time was the type of sound emanating from an active game. Instead of playing a single monotone sound continuously, we think it would be interesting to instead change the sound based on elapsed time. This change would provide a unique form of participant feedback as it would give an indication of how long the game has been going on for.

Video of Ball in Cup Game in action: