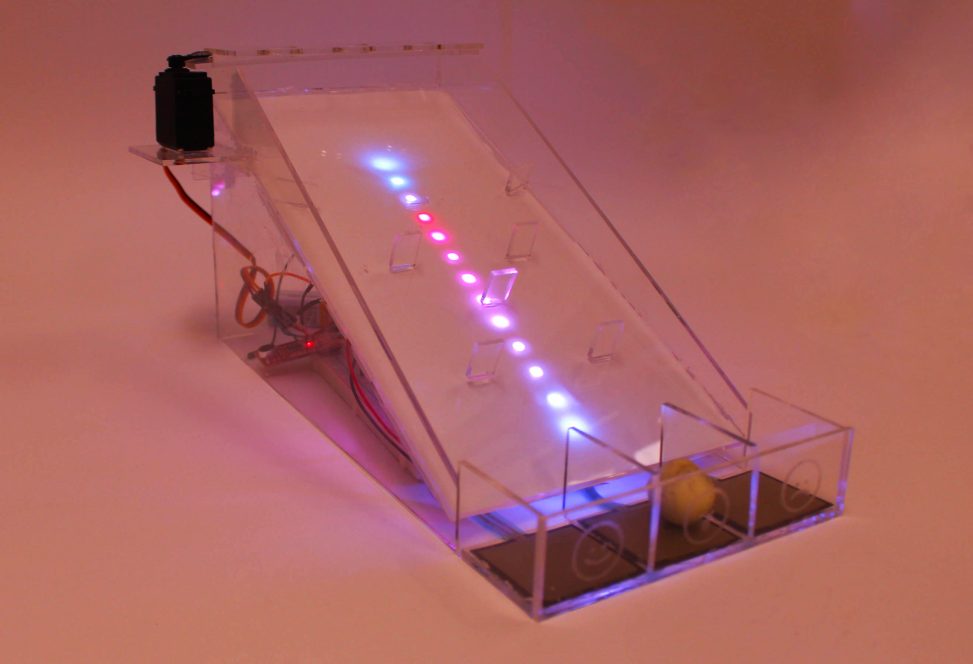 by Elena Deng and Seema Kamath

We decided to make the game Plinko with some added twists. We have an acrylic box with a motor, three release spots and three small bins. When someone nearby makes a loud enough noise, the motor will remove the acrylic piece that was blocking the ball from falling through one of the holes. The ball will then roll down the ramp and land in one of the sections. Depending on which one it lands in, a different pattern of colors will light up the ramp.

One important thing we learned electrically was that electrical components will interact in interesting ways if there isn’t enough power provided. After making sure the sound detector and the motor worked properly separately, we combined the two as that was the first stage of our transducer. The code and the wiring was checked many times with no missteps found; however, with the motor connected, the sound detector thought the noises near it were very loud no matter the noise level. After lots of testing, we were advised to try using an outside power source for the servo motor. This thankfully solved the problem as it turned out that the amount of power the motor was drawing significantly detracted from what went to the sound detector which messed up the analog reading of it.

Design wise, the importance of having prototypes was really reiterated from this project. Our first one was a proof of concept that the double transducer could work with our components. Our second prototype was potentially going to be our final one, but it ended up being a good example of some things that we neglected to plan in our new streamlined design. One important thing was leaving a big enough gap between the ramp and the bins for the FSR wires to fit underneath. When there wasn’t a big enough gap, the FSRs were being triggered randomly from the weight of the cardboard. Additionally, it was very hard to move them and see whether or not one of the wires came loose. Moreover, we needed to make the space for the FSRs a little wider so there wouldn’t be any pressure from them touching the cardboard edges. We also made them a little thinner so that the ball would definitely land on the FSRs. Another aspect we gained from the second prototype was making a cutout in the back where we could keep the Arduino and breadboard.

Overall, the difficulties we faced were primarily from the electrical components. With the sound sensor we had difficulty managing the threshold of the sound in different spaces due to the audio differences in the environment. We also had difficulty finding a feasible library for the LED light strips, however after some assistance from Zach we were able to find the correct library and manage the colors of the strip. The “easy” parts of the project were the physical aspects of the project. Putting the laser cut pieces together and making the project look aesthetically pleasing overall was simple to do. Something we could have improved with another iteration is the placement of the panels on the ramp. We would also like to explore using the clear smoky acrylic as opposed to a sheet of paper for the ramp in the next iteration. Overall, we are happy with the way that the project turned out and the fun that we had in the process of making this triple transducer game.