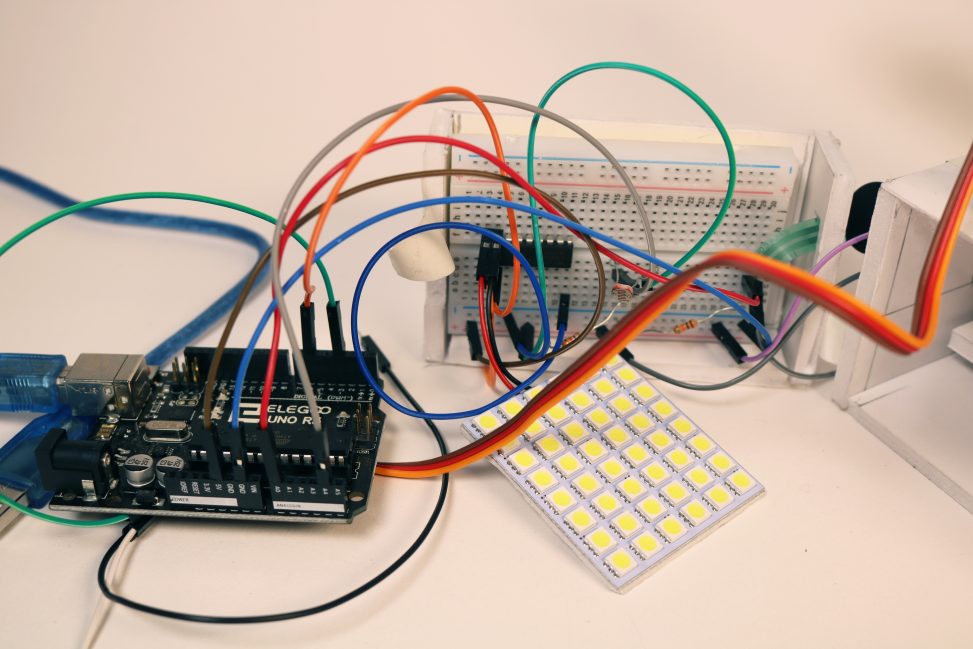 by Connor Maggio and Nina Yoo

Discussion: From the start we just started to brainstorm ideas that were interesting. We settled on Bright Balance and when we first began we started with a schematic giving the overall view of how it would work and what components it would require. However, though this step did help us begin the project, we did not really follow it as much when proceeding with our project. We turned to website tutorials to help us with our code as well as the wiring. It would have been easier for us if we had mapped or continuously updated our schematic as we went through the process.

The first component that we set up were the lights. At first, we had used the simple LED lights that were provided from earlier projects, but we needed something stronger. We then proceeded to go to a stronger LED, but that was also too weak. The professor then introduced us to an LED panel that had more than enough light, but required a 12 volt battery. We then proceeded to learn how to use bigger batteries and how we can connect it to the light source as well as the Arduino. It was helpful that the professor was with us during the wiring of the 12 volt battery to make sure everything went smoothly.

The next components we tackled was the pressure sensor and the photocell. It was easy to wire and code, but the data was noisy so we implemented “float” in order to filter out the data. This allowed for a much smoother response when printing the numbers/ looking at the graph.

After implementing the FSR and photocell, we converted that data into the motor. We used the filtered value that the photocell got from the light, which was read from the FSR, to then move the motor at different angles. We played with values of the motor to see how much angle it needed to move the marble around as well as keeping in mind the space around it. In the beginning, we had a small servomotor that was given to us in class, but then was introduced to a larger servomotor which required 5 volts. We broke the first motor, and after trying to rewire and code for a while, we realized we just needed another one.