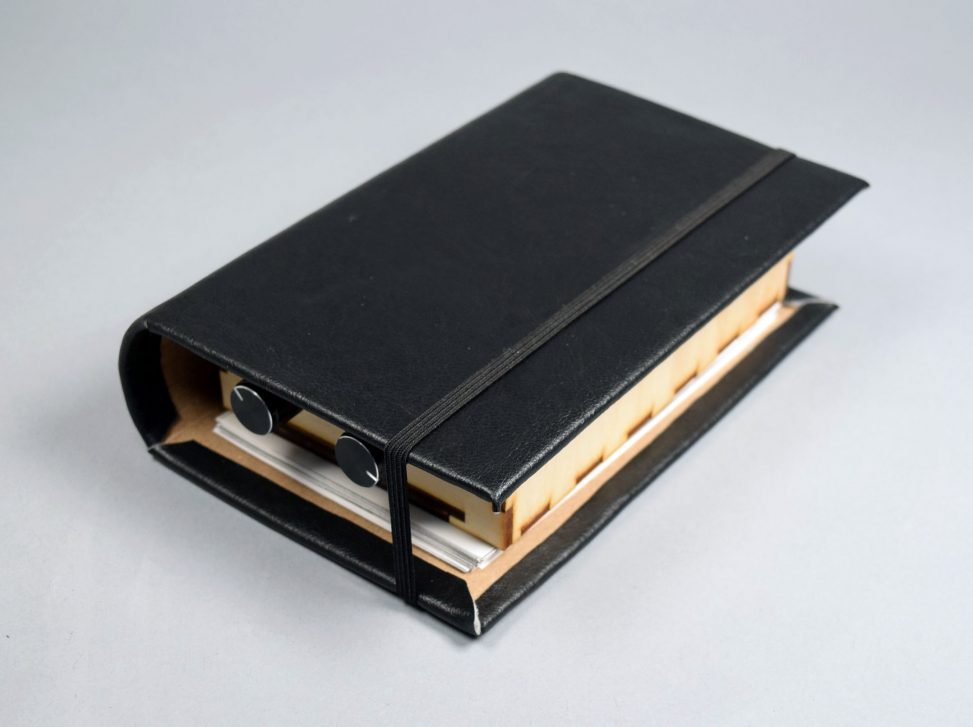 For our final project, our team was paired with an older friend, Irv, to develop a “convenience machine” he could use to improve his life. Over the course of a month, we interviewed him on his daily activities, developed a prototype, and refined a final model that Irv could take home and use. By employing methods of Physical Computing, including programming, circuitry, and physical fabrication, we created an “interactive itinerary” device unique to Irv’s busy lifestyle.

The Interactive Itinerary is a digital reminder system (think Google Calendar) that feels like an analog device. The user can set alarms for tasks or events without having to type on a small and sensitive touchscreen. Instead, the user can write down the task on a piece of paper and set the alarm using built in knobs.
The interactive itinerary prototype has 3 key components: 1) Two knobs that set the task and alarm 2) the digital display that shows task, time, and set time 3) a vibrating motor that acts as an alarm. To use the interactive itinerary, the user writes down a task on a piece of paper with an empty list from 1 – 10. Using the task knob, the user can turn to the desired task number turn the alarm on. Then, they would set the time using the time knob. When the alarm starts to buzz, the user can turn off the alarm with the task knob. 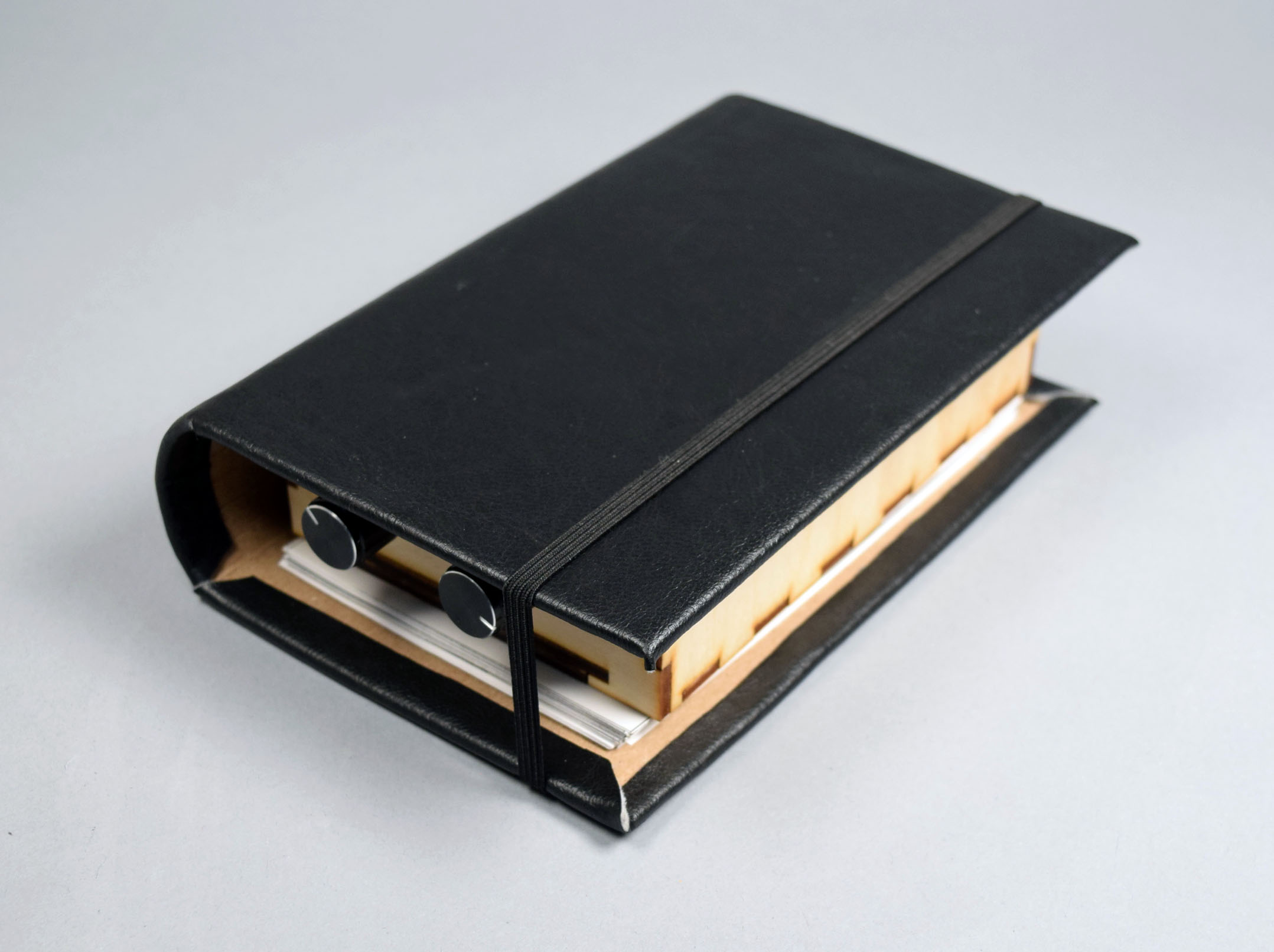 Outer housing of itinerary is bound with elastic. The knobs and buttons are protected by the sides but still accessible without having to open the device. 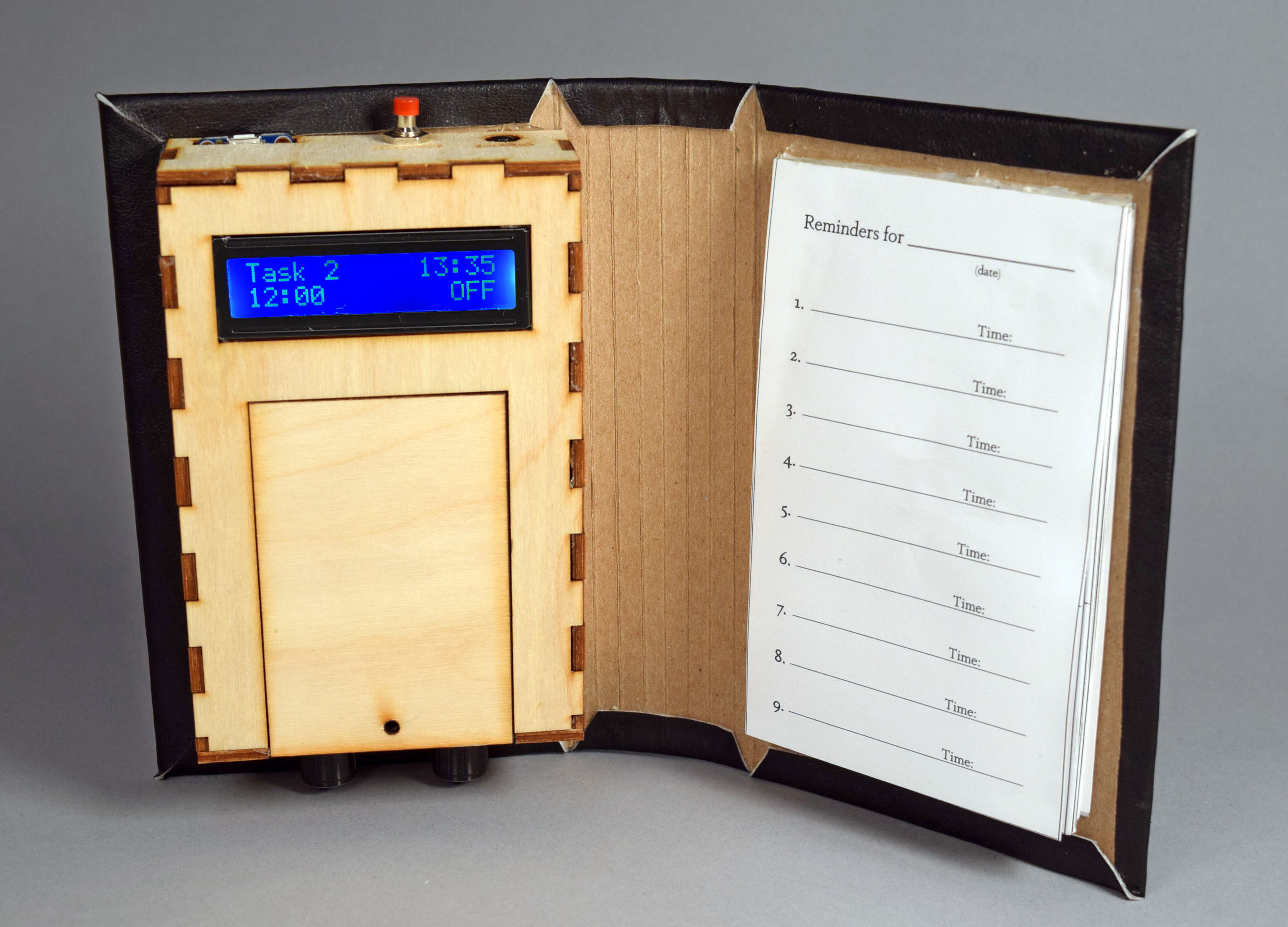 Inside of itinerary displays an LCD screen, casing for electronics, and notepad. 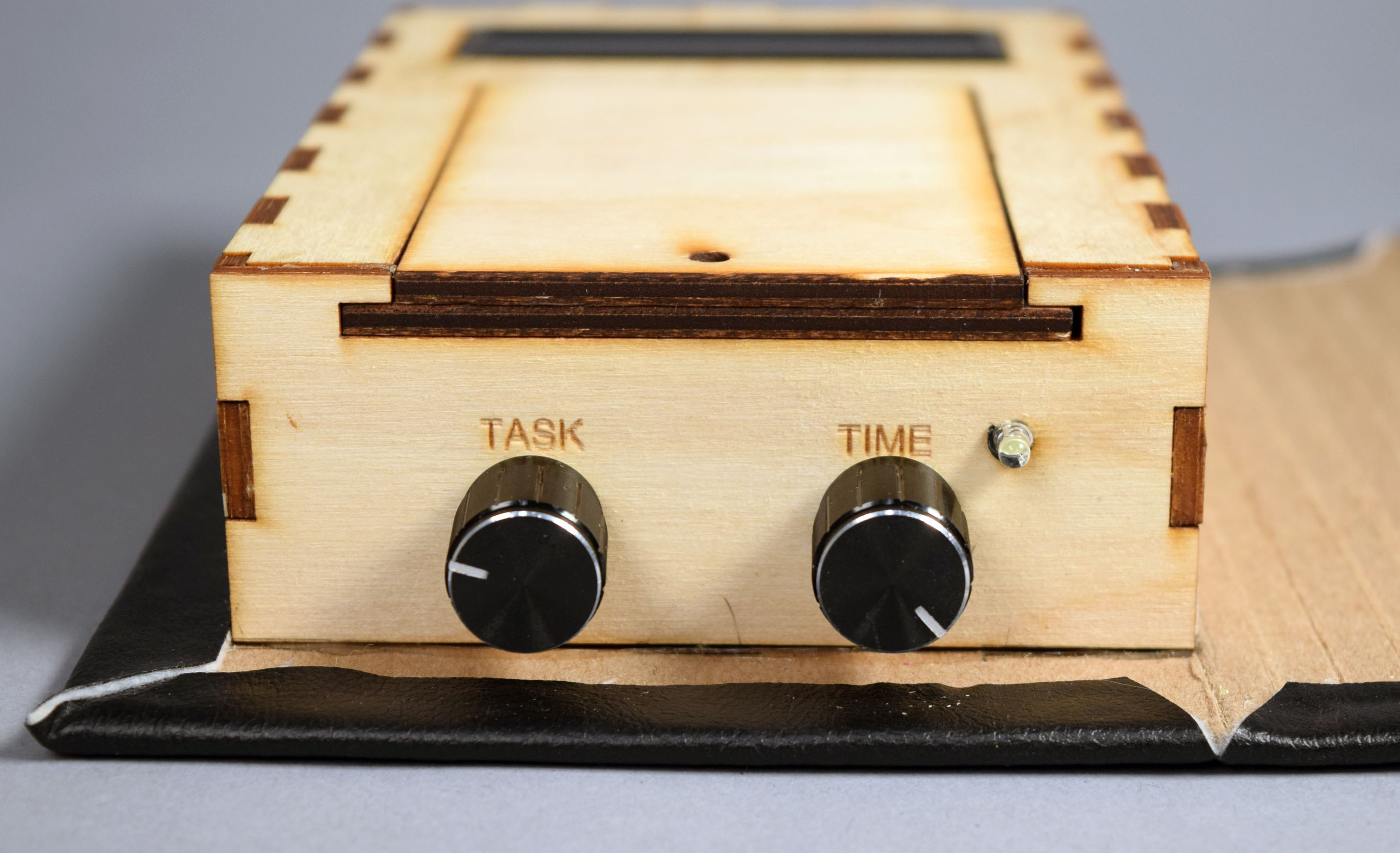 “Task” and “time” knobs for programming the device, indicator LED, and sliding mechanism to access electronics.

The top side of the electronics housing reveals the on/off button, “snooze” button for offsetting an alarm, and charging port. 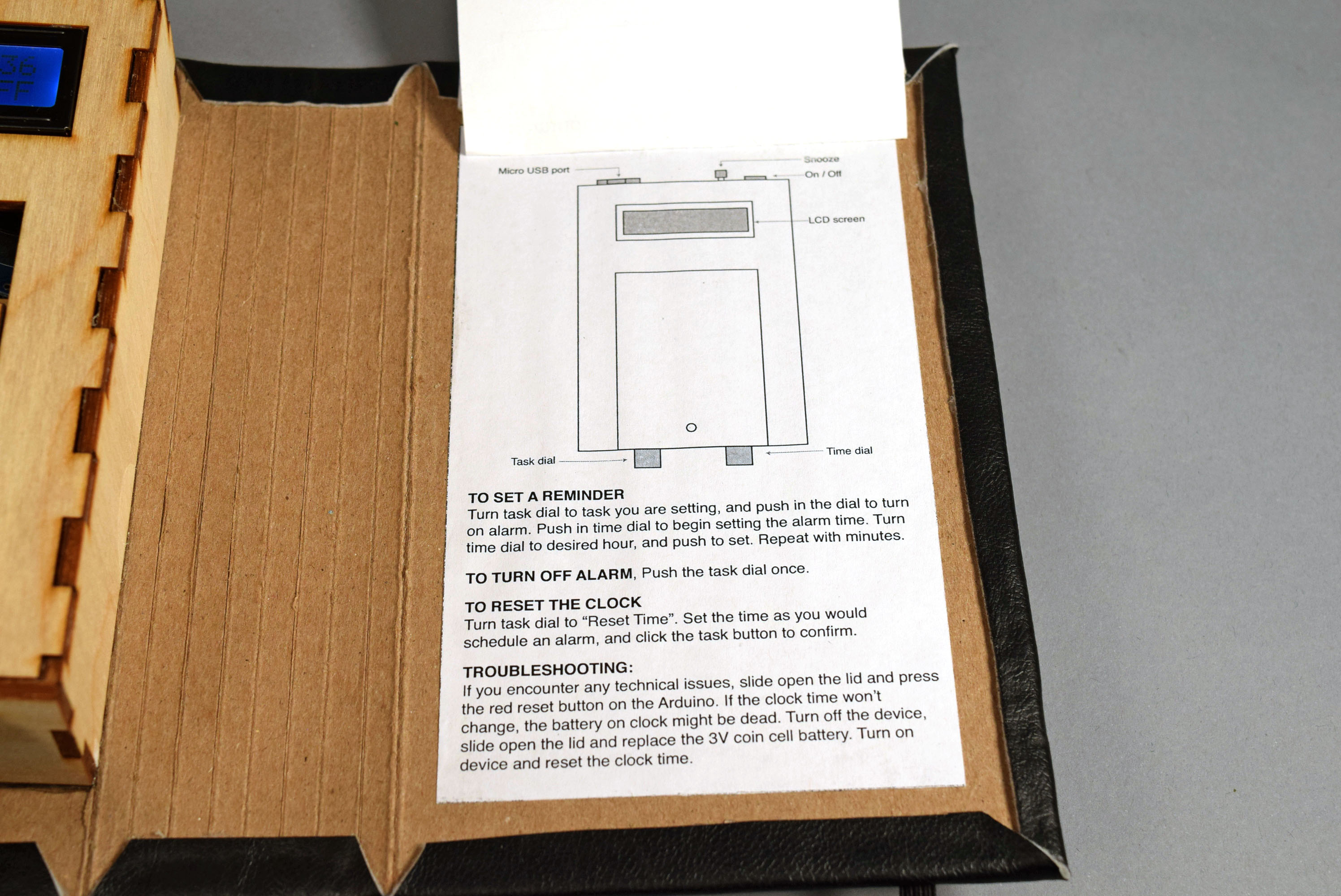 A small manual is mounted under the notepad for troubleshooting and quick reference. 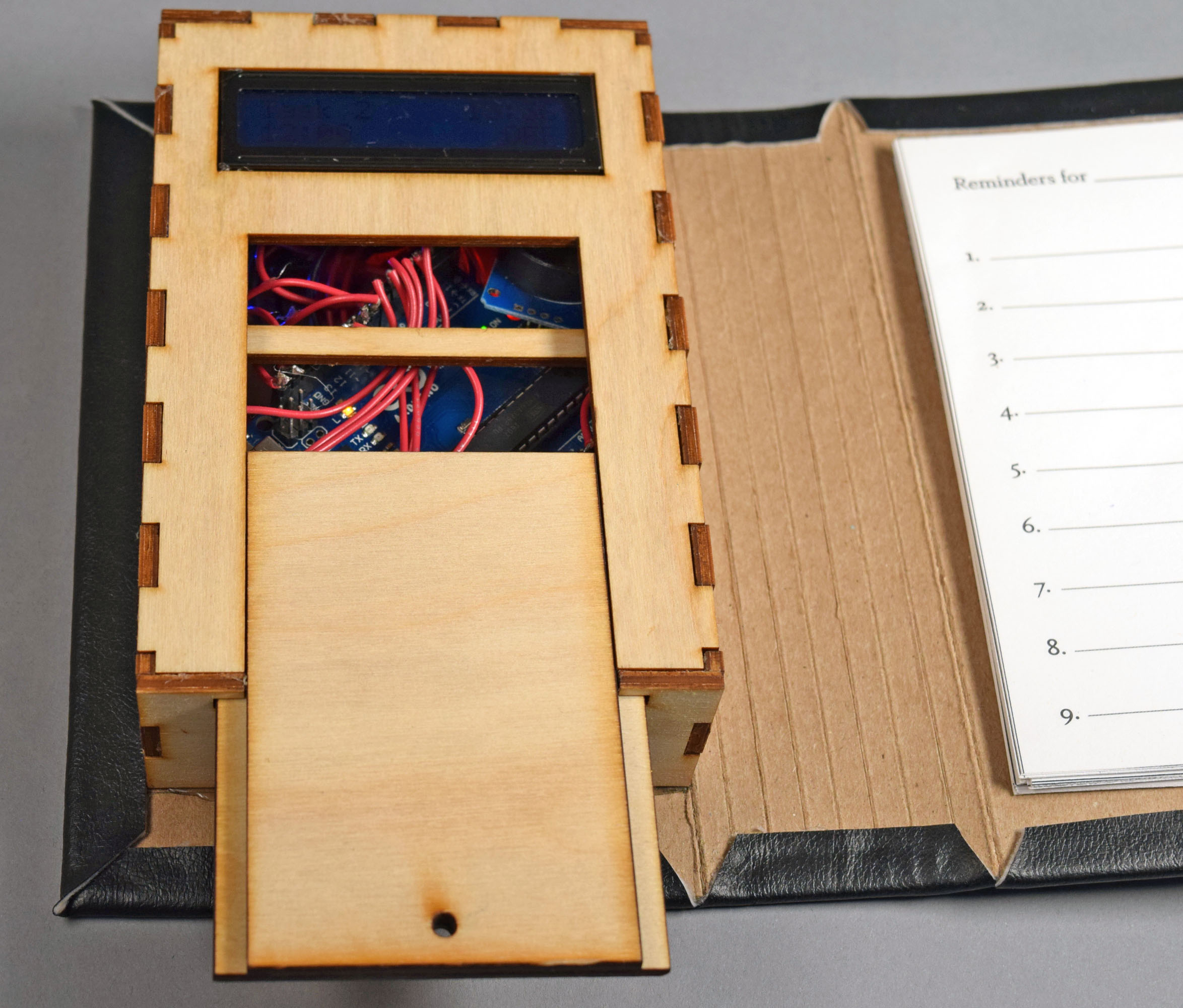 On a normal day, Irv wakes up and unplugs the device from the charging port. On the notepad, he writes down his tasks for the day and the time they occur (i.e., medications, tennis meetings, cultural events). He can then use the knobs on the device to set reminders for the tasks he would like to be reminded of. Irv then closes the journal and takes it with him throughout the day. When a reminder goes off, the journal will buzz and flash, and the task will appear on screen. He can then press a button to turn off the alert, or push “snooze” to delay the reminder for another 15 minutes.

How we got here

Following the formative critique phase of this project, our team created a list of milestones we intended to hit for our final meeting with Irv. After showcasing our first prototype at the formative critique to Irv, we learned that a 15 minute snooze button would be a useful addition to the device. We learned that Irv preferred to set alarms in military time and would like an on/off switch on the device to conserve power. 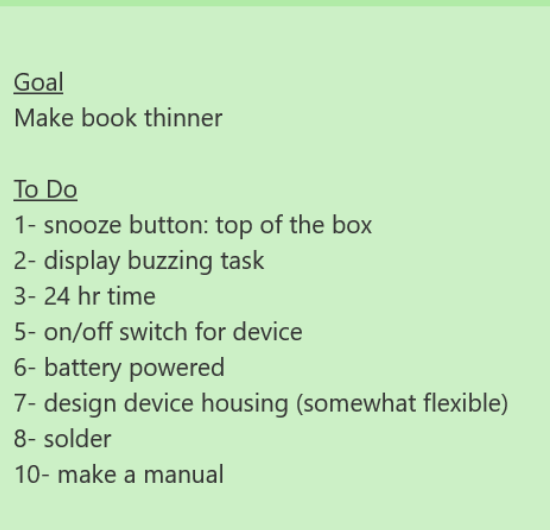 We created a to do list with Irv to ensure that the final product suits his needs and ranked it based on importance.

The snooze button and on/off button were relatively easy to set up. The most important part about the snooze and on/off button is picking a button that has the right tactile feeling. After the formative critique, we went to the physical computing lab and pulled out many button options for Irv to test. He settled on a red momentary push button for the snooze button and a black latching push button for the on/off switch. 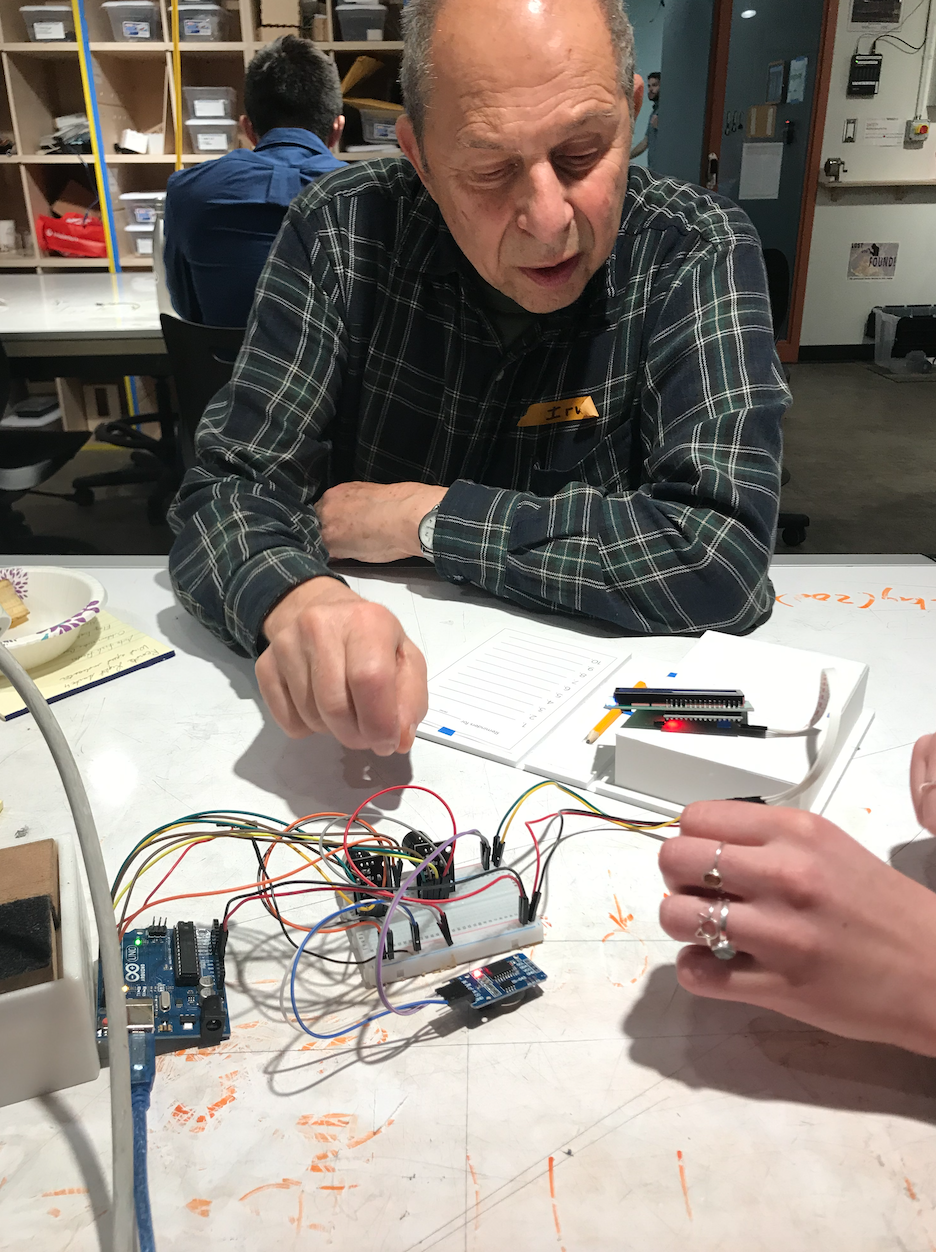 Irv tests different buttons for the new features on his interactive itinerary.

The next thing we wanted to add to the interactive itinerary is displaying the task “home page” when the alarm for that task goes off. This feature, which wasn’t in our first iteration, makes sense because when the alarm goes off, we would want to know which task alarm was going off. So, when the alarm goes off now, the task number that is ringing is also displayed on the LCD. Without this feature, the user would have to look at the written list of tasks and check each alarm time to see which task was going off. 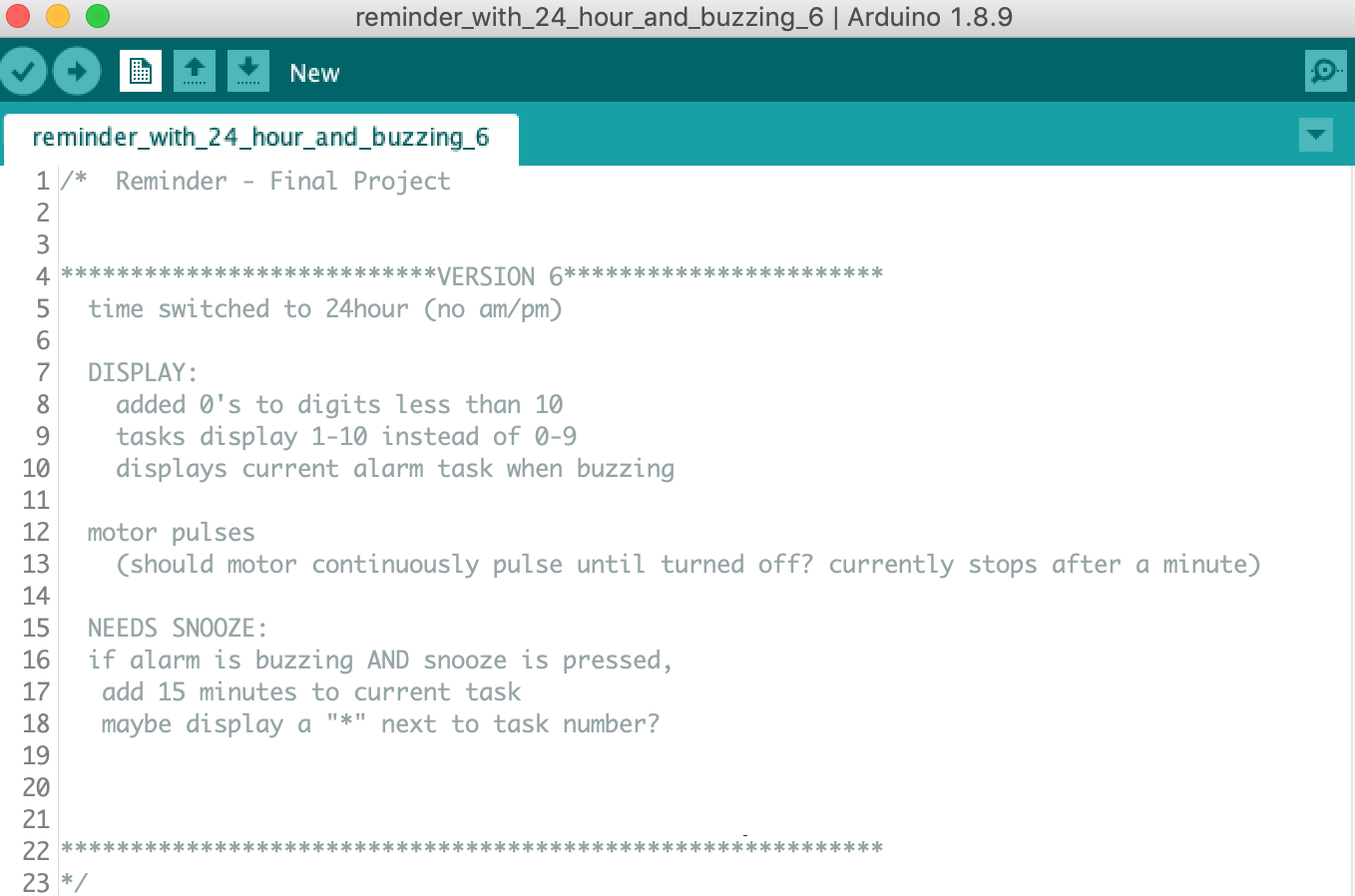 In order to manage all our coding iterations and keep track of our goals, we wrote comments on our new versions to communicate what was working, what wasn’t, and what our next steps should be.

Once all the necessary components were bought and collected, we laid out the device components to determine the best way to stack the device to minimize the space. As shown in the picture below, the device would already be very cramped, even before soldering everything together. Since we were no longer considering bootloading our device onto a smaller device, we had to stick to the arduino uno. So at this point in the process, our goal to make the device “pocket-sized” was becoming less and less feasible. 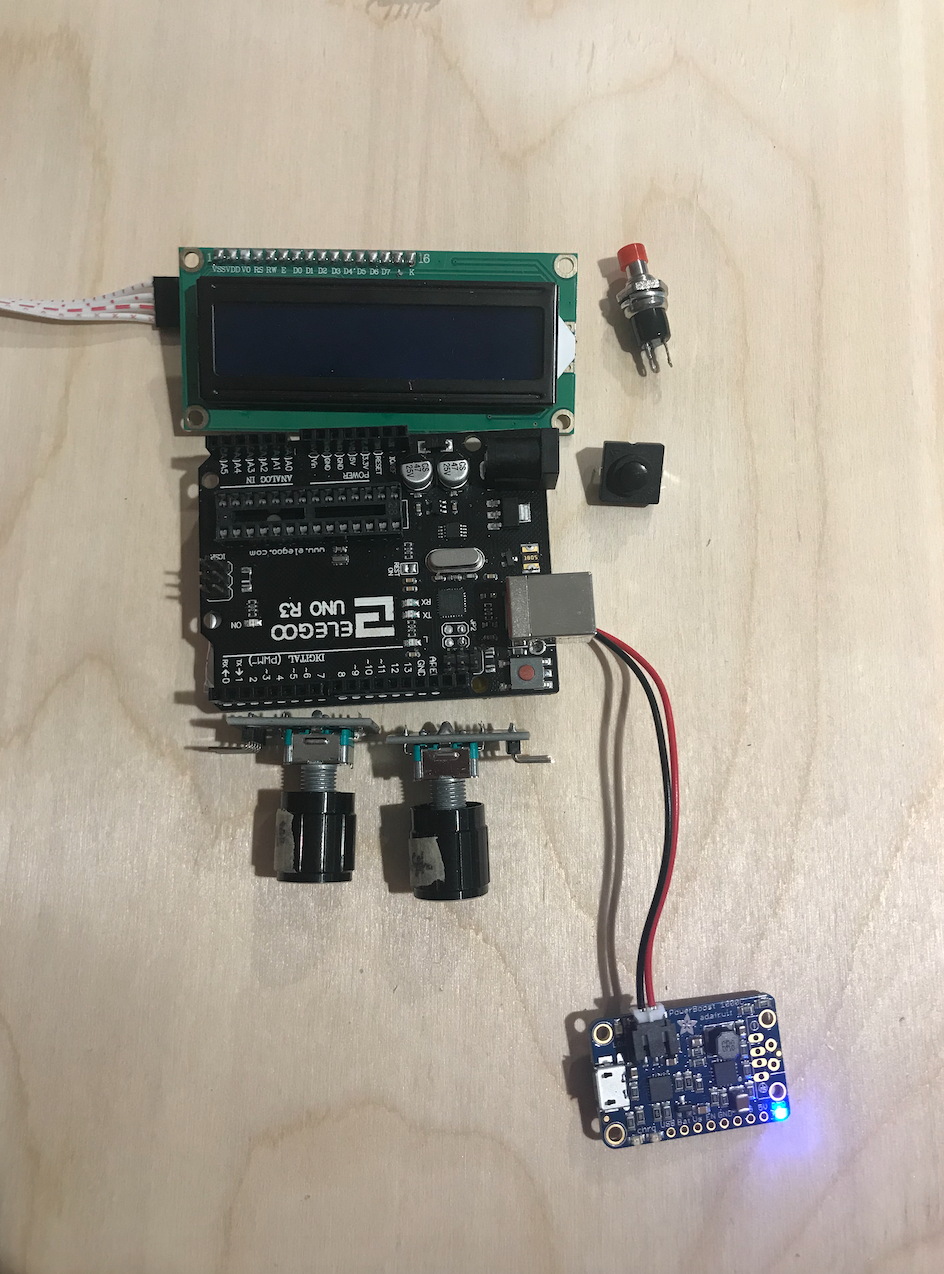 In an ideal set up, the LCD screen would sit at the top of the device. The charging port is in the top left of the box. The snooze button and the on/off button would rest on the top, closer to the spine of the box. 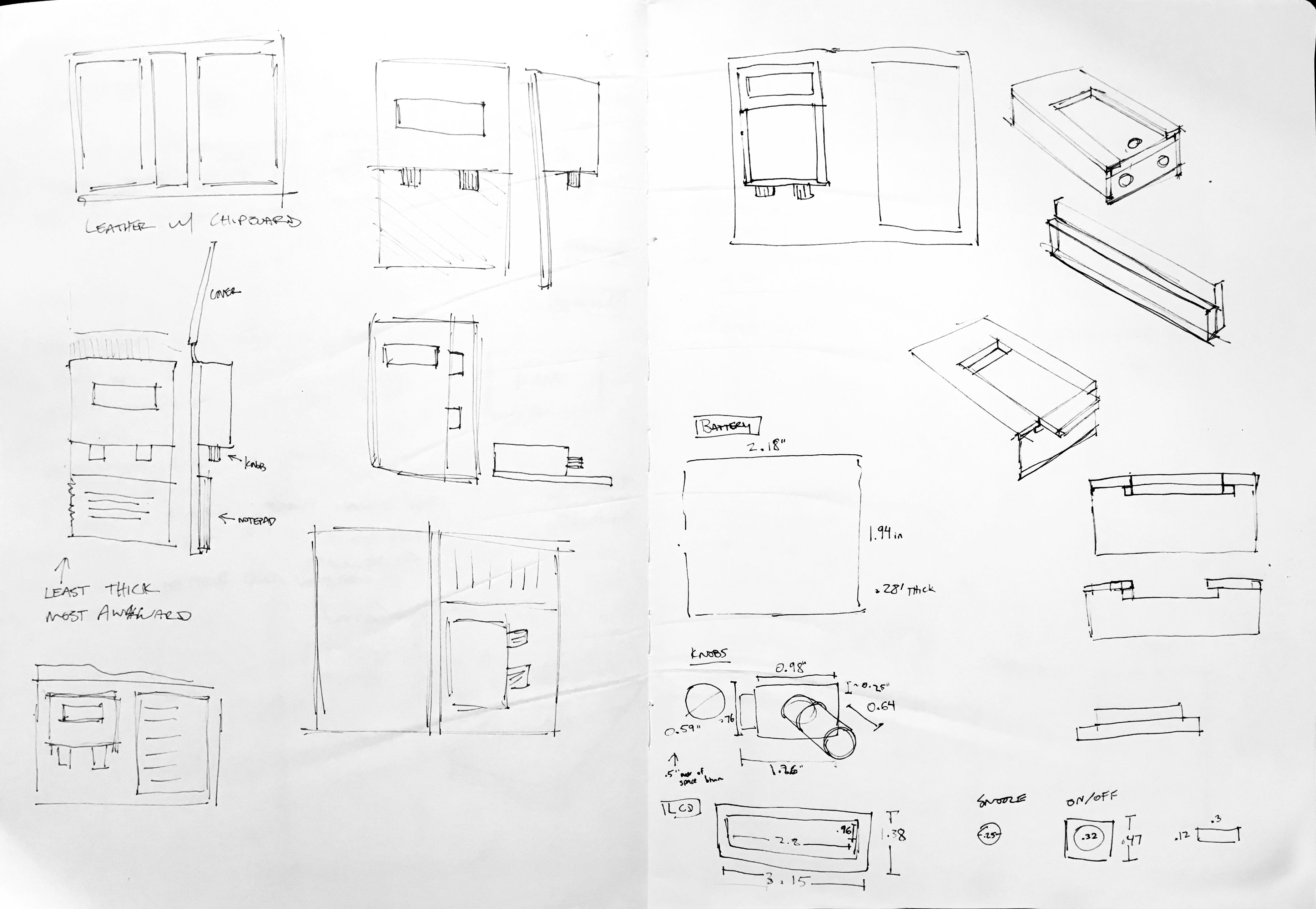 While designing the prototype for the device casing, we considered several materials for the electronic housing. Acrylic, while sturdy and aesthetically pleasing, is prone to shattering. So if Irv decided to put this device in his back pocket, or applied too much pressure to it, it might crack under pressure, rendering the casing useless. Styrene is a plastic that is a bit more flexible but sturdy as well. Ultimately, styrene would not have been ideal to use as our electronic casing because we needed to make a case that had precise cuts and we would not be able to laser cut styrene. So, we decided that ⅛” birch plywood was the best material to use for the device. We also decided to include a sliding lid on the electronic casing so that if Irv needed to replace the RTC battery or reset the arduino to troubleshoot. 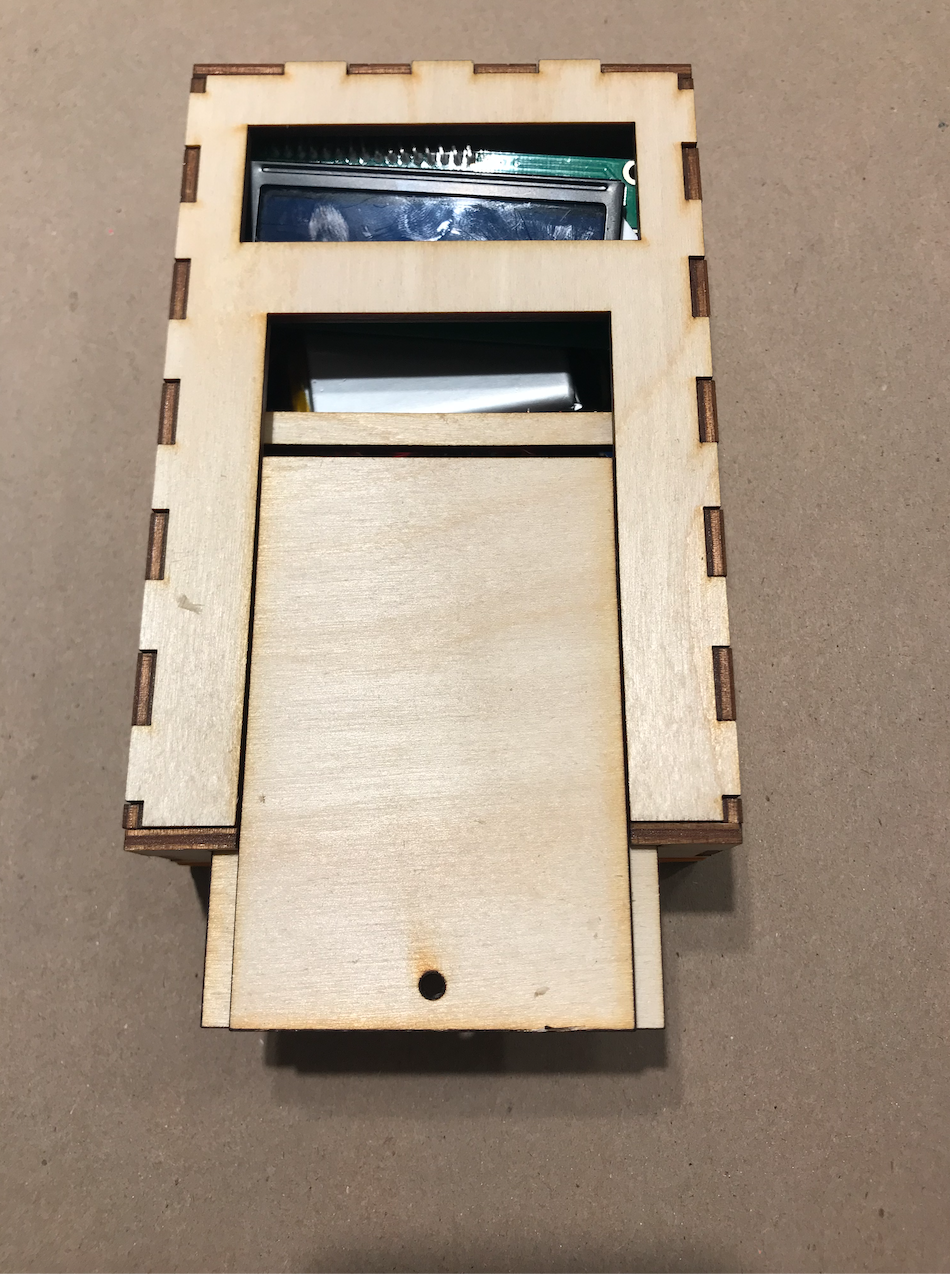 The sliding mechanism consisted of two pieces of plywood glued together that fit into the top facing of the case. To keep the lid on, a support bar was built under the top facing. That way, the lid can rest on the support bar.

In addition, the laser cutters at TechSpark burn more, cut slower, and are more volatile than the laser cutters in IDeATe. Luckily, the first print was just a prototype; so we planned on printing the final casing in IDeATe. The first prototype was also larger than we needed. There was a lot of room inside the casing. We were able to make the case thinner and narrower. While the notebook would still not be pocket-sized, it was still considerably smaller. 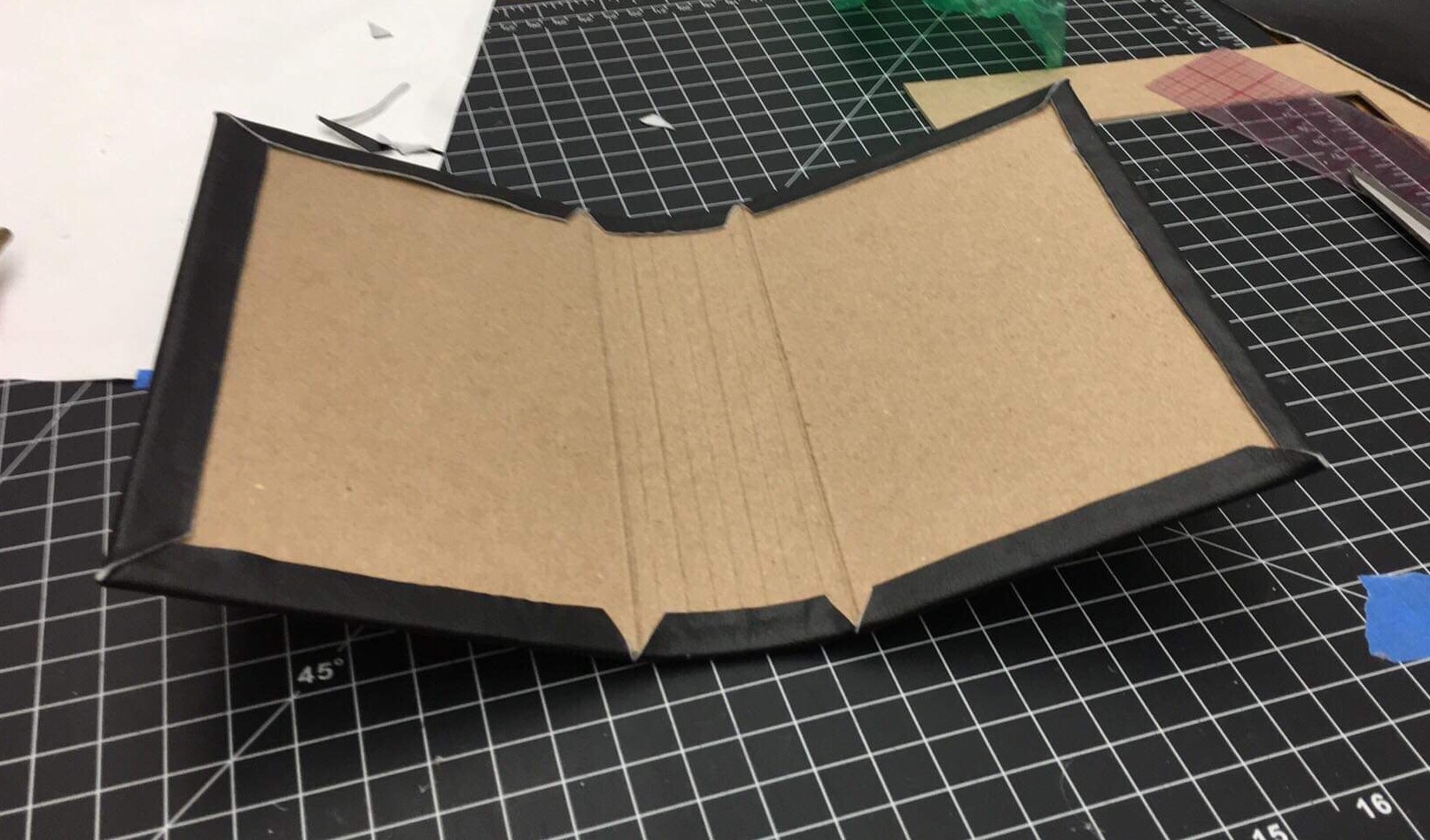 After considering different methods of fabrication for the outer casing, we decided traditional “bookbinding” techniques would best fit Irv’s aesthetic. Inspired by moleskine journals, we used flexible chipboard, faux leather, and elastic to create a housing that would be sturdy, comfortable, and stylish.

After the final crit, we added one last feature to our box because of a comment made to “make the alarm stronger” if it couldn’t be kept in his pocket. Since we were planning to make the box small, we didn’t account for possible issues if it was too large to fit into a pocket. Some of these issues would be would Irv notice the alarm going off if it wasn’t on his person. Our solution was to add a small LED next to the task and time knobs that would blink at the same rate that the buzzer would be going off. This would allow Irv to see the alarm going off as well as feel it. As he’s told us that his hearing isn’t the best, we thought we’d try to stimulate his other senses with the alarm.

Working with Irv was more than just an opportunity to gain insight on the life of an older person, but a beneficial experience in collaborating with a client. Not only did learning about Irv’s lifestyle allow us to empathize with his daily needs, it also taught us how to iterate and design under constraints that can assist virtually anyone. While the itinerary was developed for his particular lifestyle and activities, all of us can benefit from a method of keeping track of lists with time notifications. In principle, this project was a great introduction to universal design. By solving the problems of overlooked populations rather than the “average person,” we can innovate more effectively and inclusively.

Moreover, we believe that having a person to design for other than ourselves pushed us further to create something functional and intuitive. Since we realized Irv wouldn’t have the means to fix the RTC if it reset, for example, we decided late into the project to build in a time-setting function into the program. This mindset also prompted us to add in a sliding compartment to access the electronics, a “sleep” mode to save power, and a reference manual for troubleshooting. If we hadn’t had an actual client to work with, it would have been easier to let these considerations slide when you know you can can quickly reupload, solder or glue something back together. Knowing that Irv will be keeping this in his home and hopefully trying it out, we feel more confident knowing that we built in features to extend the project’s lifespan. 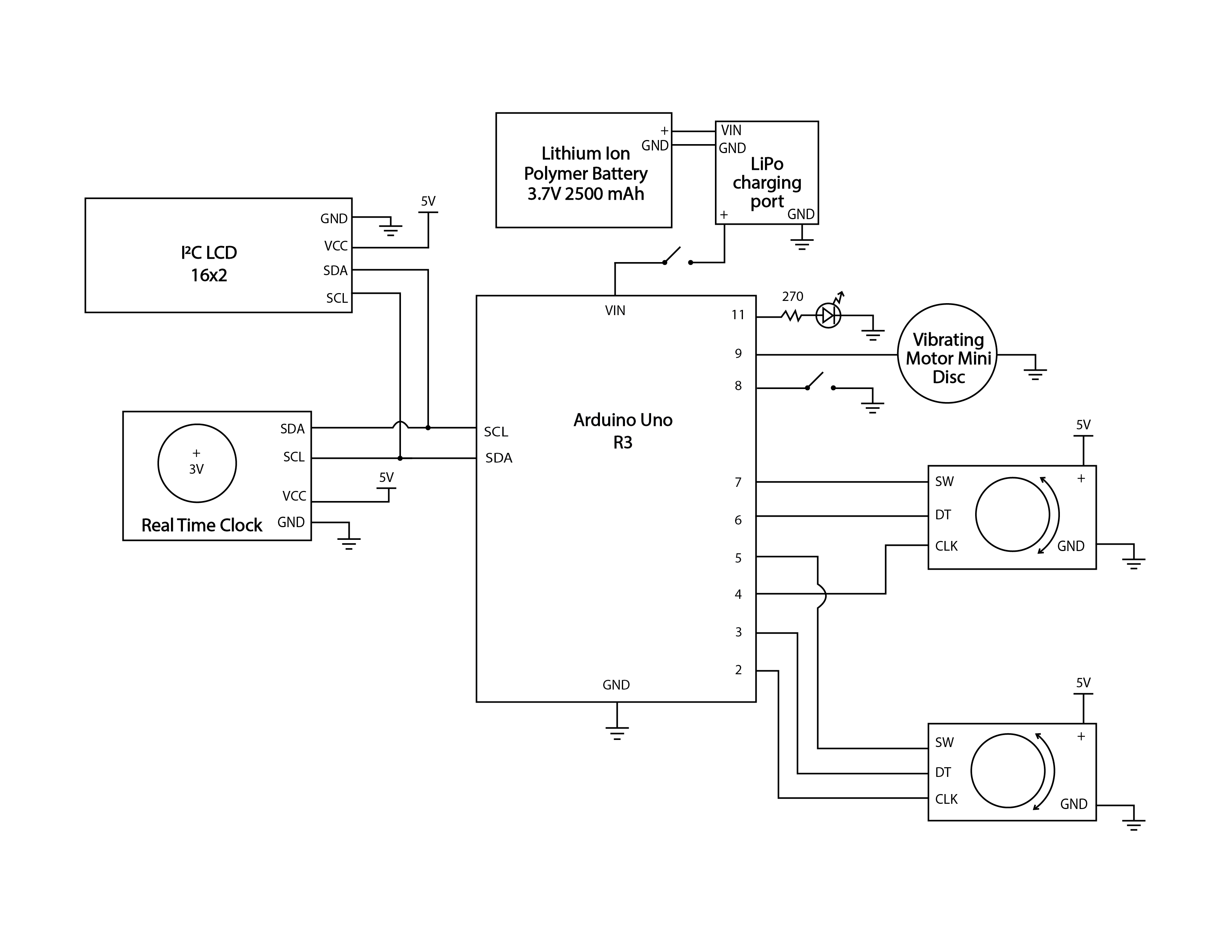