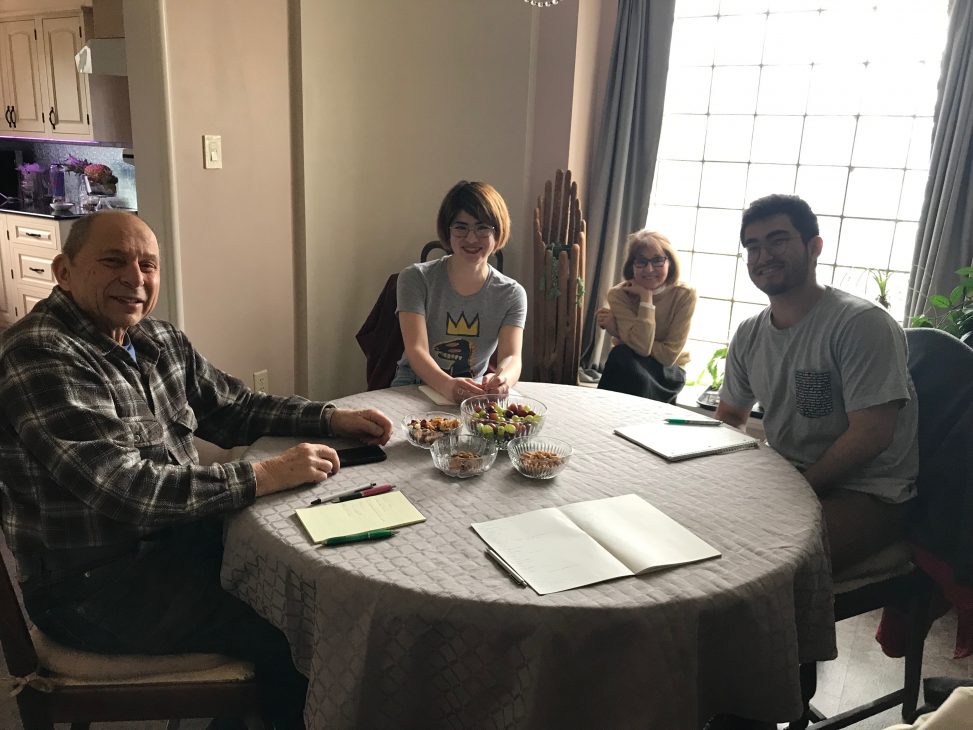 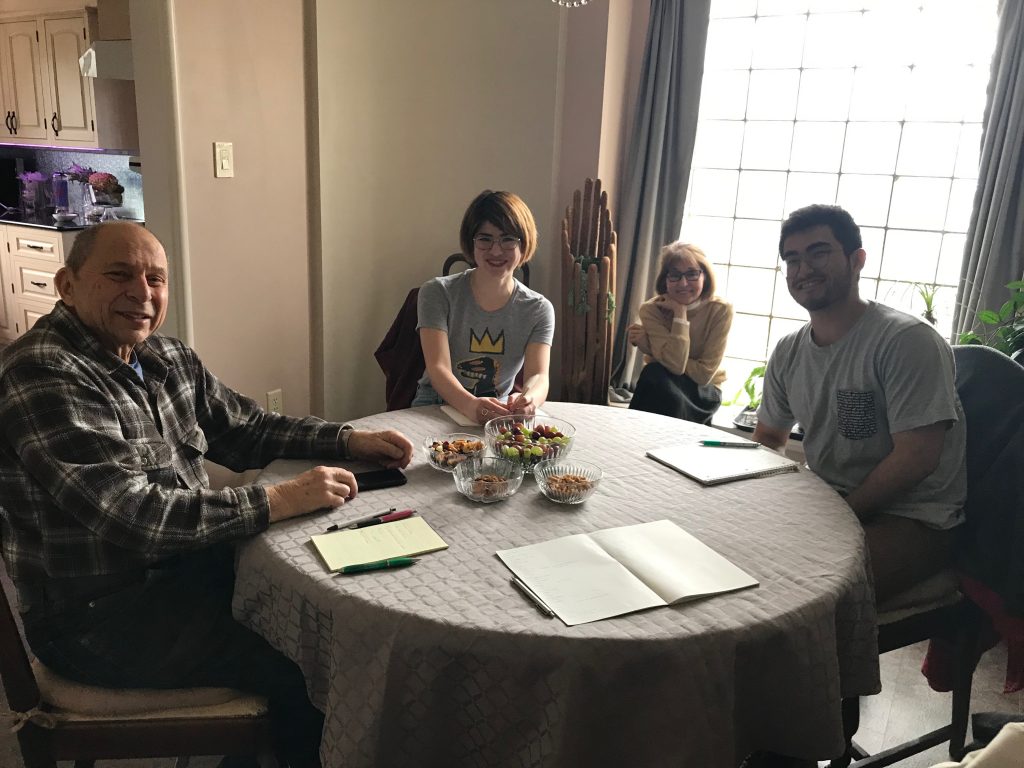 Irv and his wife Lois welcome us into their house with snacks and a friendly cat, Buttons

This meeting’s purpose was to meet with our Osher student Irving “Irv” Lieberman and get to know his daily routine so we would be able to narrow down what we should design for his convenience machine. We planned to meet with him Sunday morning, March 24th, in his home to discuss his lifestyle. We wanted to go to his house so we would also be able to see how he lived. Our goals for the meeting were to get as much information about Irv’s hobbies, daily routines, responsibilities, and aspects of life that we could make more convenient. We want to make sure we keep Irv in the loop when it comes to creating this convenience device because it is for him after all.

Before meeting with Irv, we planned out how we wanted to conduct the interview and what we hoped to learn from this experience. 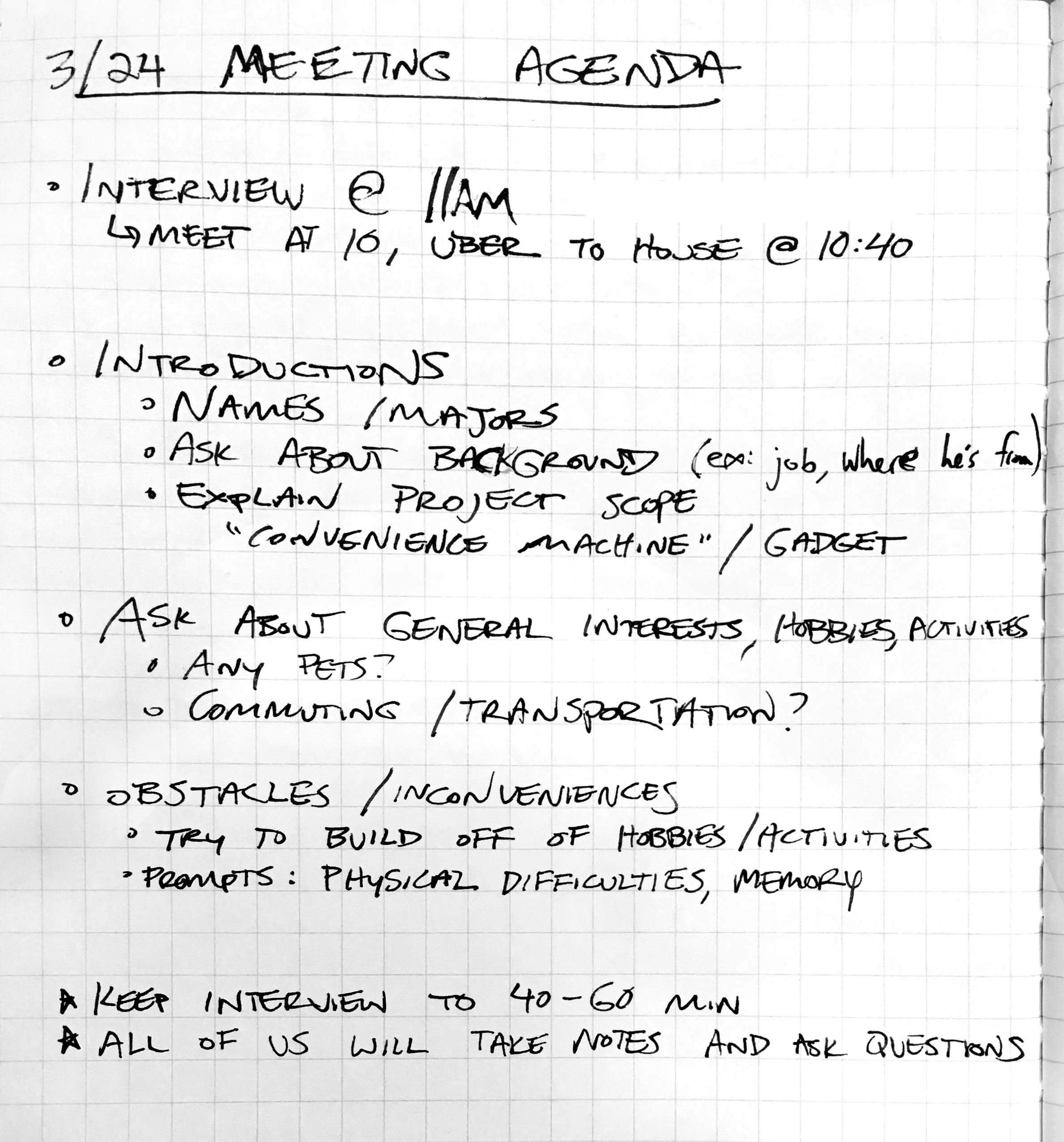 Irv and his wife, Lois, live in a house at the top of the Squirrel Hill neighborhood. Their house has rough stone steps, steep staircases, and plenty of room for gardening. Irv, originally from Bronx, NY, has a PhD in electrical engineering. Throughout his career, Irv worked with lasers and atomic clocks, and was involved with many patents. His career brought him to Westinghouse in Pittsburgh where he mainly worked with energy. Irv and Lois have no children and two cats. Since Irv and Lois do not have children (and as a result, no grandchildren), they do not have members of the younger generation to teach them how to use new technology. So, while they both have iPhones, they struggle with this new interface that is less analog. Overall, Irv is a very capable and handy person, always fixing things around the house and comfortable working on technical projects.

A Day in Irv’s Life

Irv stays active by maintaining his garden around the house, by taking care of weeding, laying manure, and by trying to keep the deer away from his plants. His house is very old, so it needs constant work. He told us that he’s had to repair sinks, and redo the electrical in some of the rooms. His kitchen is very decked out with shelves on wheels that you can hide under the kitchen counter, adjustable LED lighting over all his counters, and electrical outlets all around the island in the center of the kitchen.

The video below shows innovative kitchen shelf unit that Irv designed and constructed. 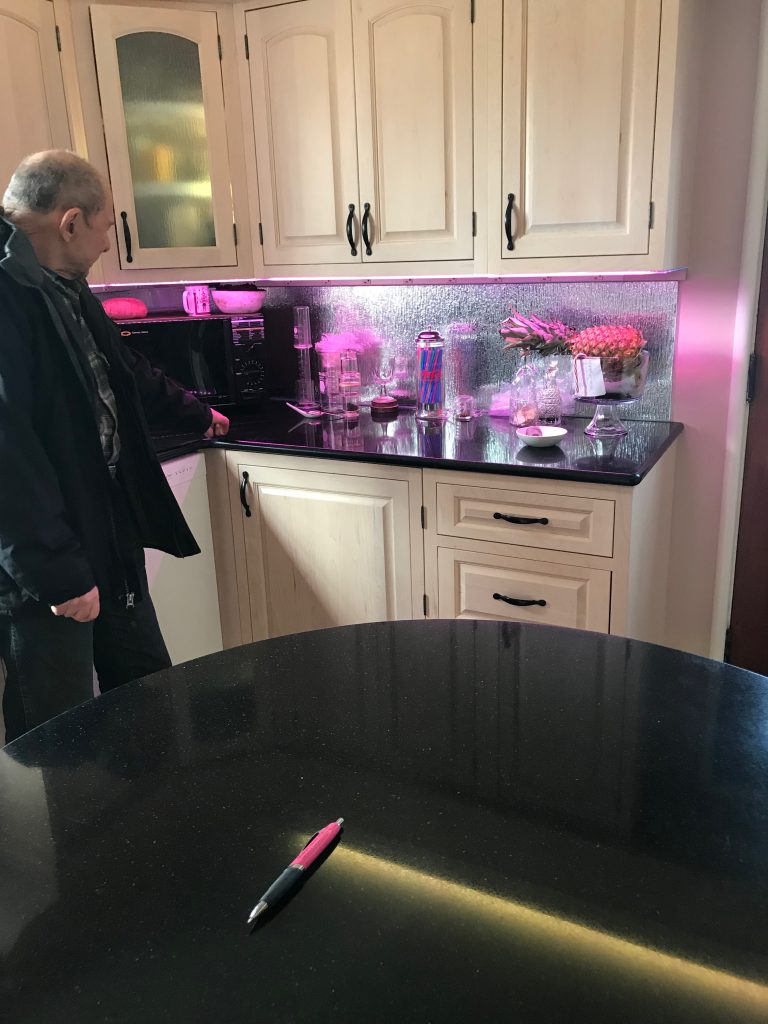 He also plays tennis and works out. He keeps his mind active by going to Osher classes, and since he has a Ph.D. in electrical engineering, he is able to take some of the more technically challenging classes like astronomy. Him and his wife Lois also enjoy going to cultural events like the opera, symphony, ballet, and dinner parties with friends. Even though they have a car, they enjoy walking and taking the bus if they have time.

In spite of maintaining a very active and social lifestyle, Irv admitted to facing certain obstacles as a result of aging. To start, he told us that understanding new software (like iphones) was often difficult for him, especially since he had no children or younger people around to help explain the technology. 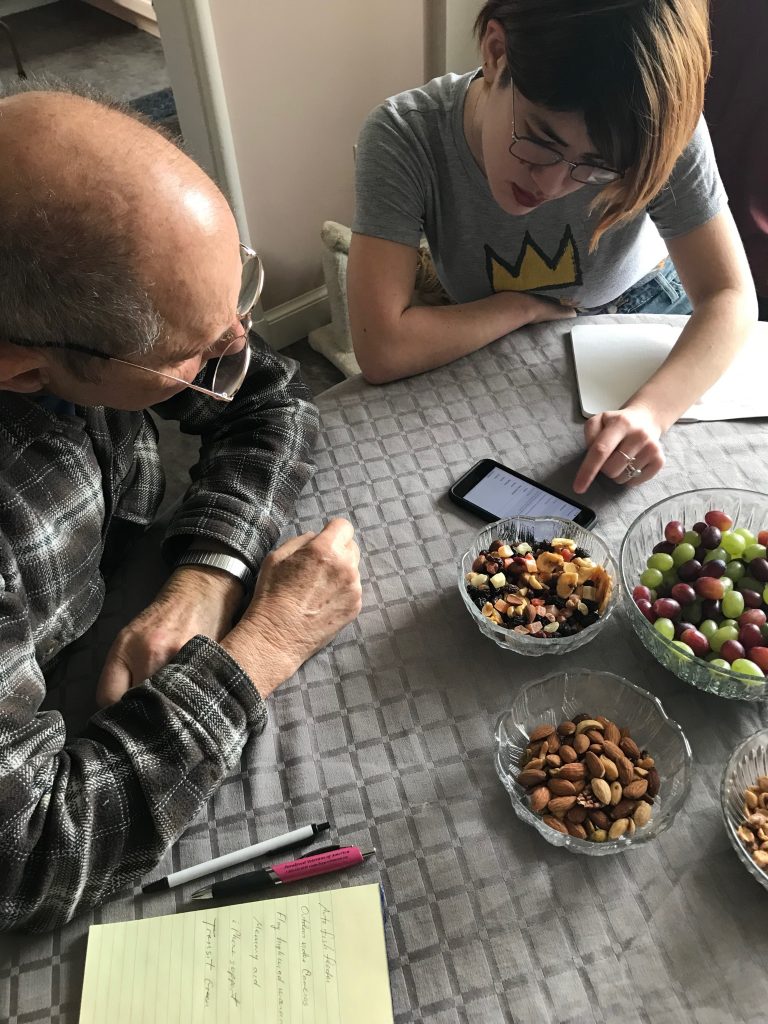 Additionally, his desire to complete his own housework, like weeding and washing his car, is hindered by physical exertion and a bad knee. Irv also mentioned having some problems with hearing. Over the course of the meeting, we noticed that Irv didn’t hear the clock chime or the new texts on his phone since they were prompted solely with audio notifications. While this doesn’t drastically impair his daily activities, we noted that we should use non-audio sensory alerts (like vibrations and visual cues) when brainstorming potential devices. Nearing the end of the interview, we learned that Irv has trouble staying on time and keeping his reminders organized. 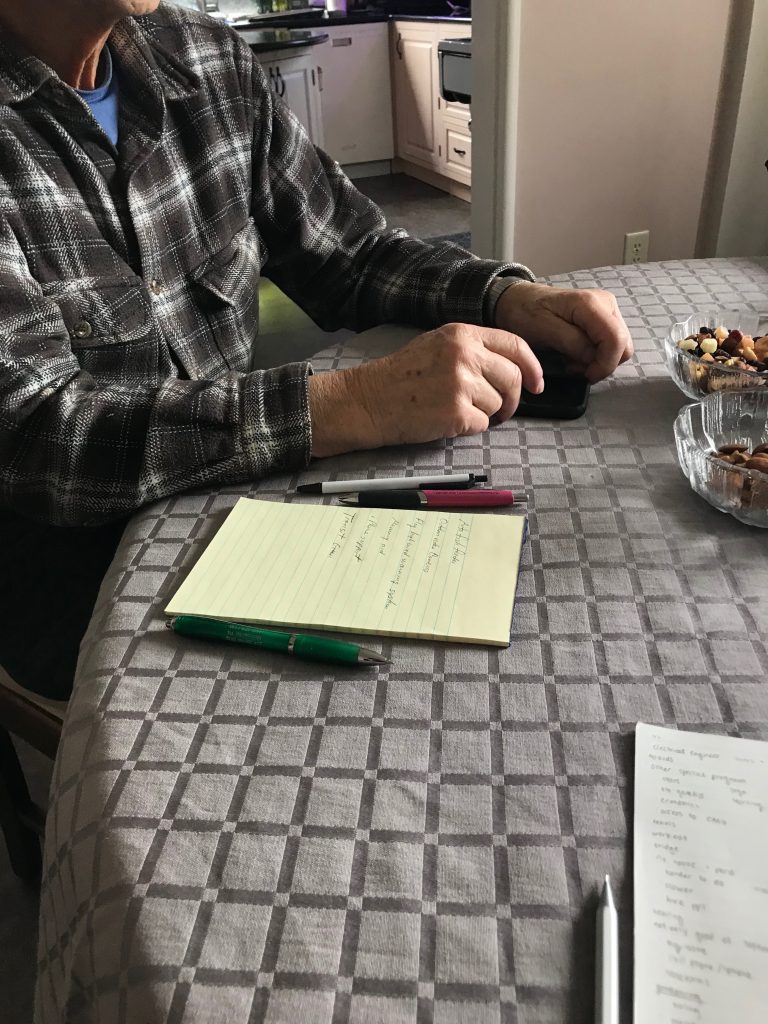 He seemed to take interest in this issue as a point for intervention, so we started to develop ideas for a type of portable reminder device that could keep him on schedule via vibrations or flashing lights.

Our first meeting with Irv was very successful and productive. We wanted the meeting to be less like a interview and more like a conversation between a group of people, which we succeeded in doing. In other words, we did not try to structure our meeting in parts. Instead, we bounced between conversations about Irv’s background, our own backgrounds, and Irv’s current lifestyle. We concluded that based on his active lifestyle, work around the house, and customized kitchen, Irv is a very capable person and doesn’t require much assistance. After having a productive meeting with Irv, we decided to lean on the convenience side of this project, as opposed to the assistive aspect.

While Irv was very willing to talk about his work as an electrical engineer and his life in Pittsburgh with his wife, Lois, he was reluctant to give details about things he struggles with. For instance, when we were discussing the difficulties of gardening and maintaining the house, even with some prodding, Irv did not specify what specifically was hard and only said that gardening is a tiring task. However, having Lois sit in on the meeting was very beneficial because she would interject when Irv was vague about what he struggles with. She brought Irv’s bad knee, back, and hearing  to our attention. Overall, having Lois for a second input helped us narrow down the ways in which we could work with Irv.

Some things we could do differently next time is get more insight to his daily routine by getting a tour of their house or seeing them demonstrate different parts of their daily lives. We got a glimpse into Irv’s capabilities when he and Lois showed us the all the gadgets and renovations in the kitchen. He is a very independent, smart, and active person. Overall, the meeting was very successful and we feel like we built a solid foundation with Irv. We got to learn a lot of Irv, as a person and as a client, and discover many interesting aspects of his life here with Lois.