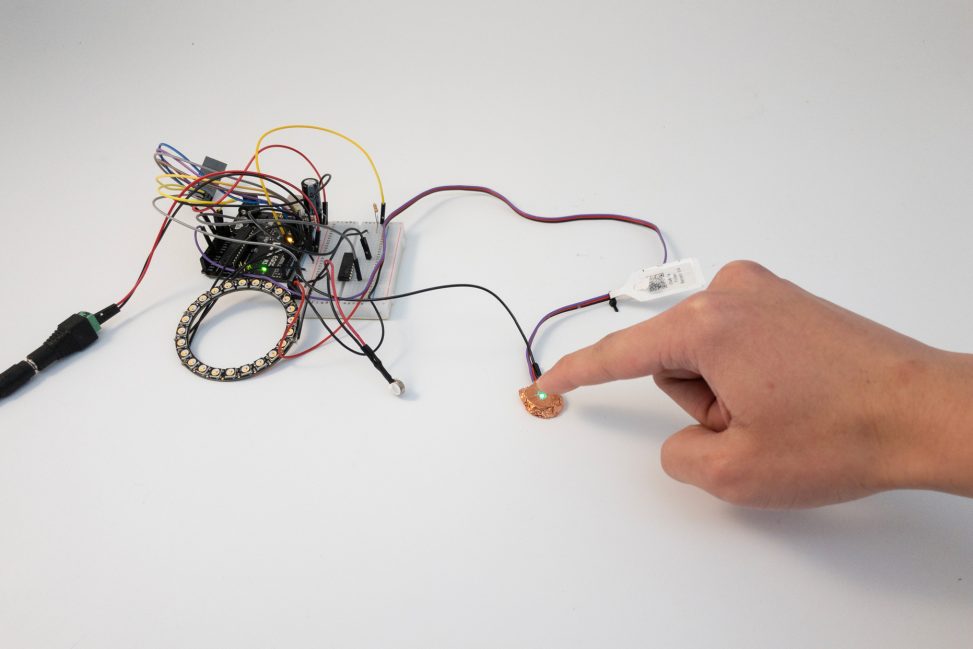 After meeting with Elinor, we decided that we wanted to make her a device that helps her focus on her mindfulness and encourage her to take some breaks during her busy schedule. The prototype that we built synchronises heart rate monitor readings with an LED ring and a vibrating motor to help Elinor visualise her current state and bring her back down to her resting heart rate. 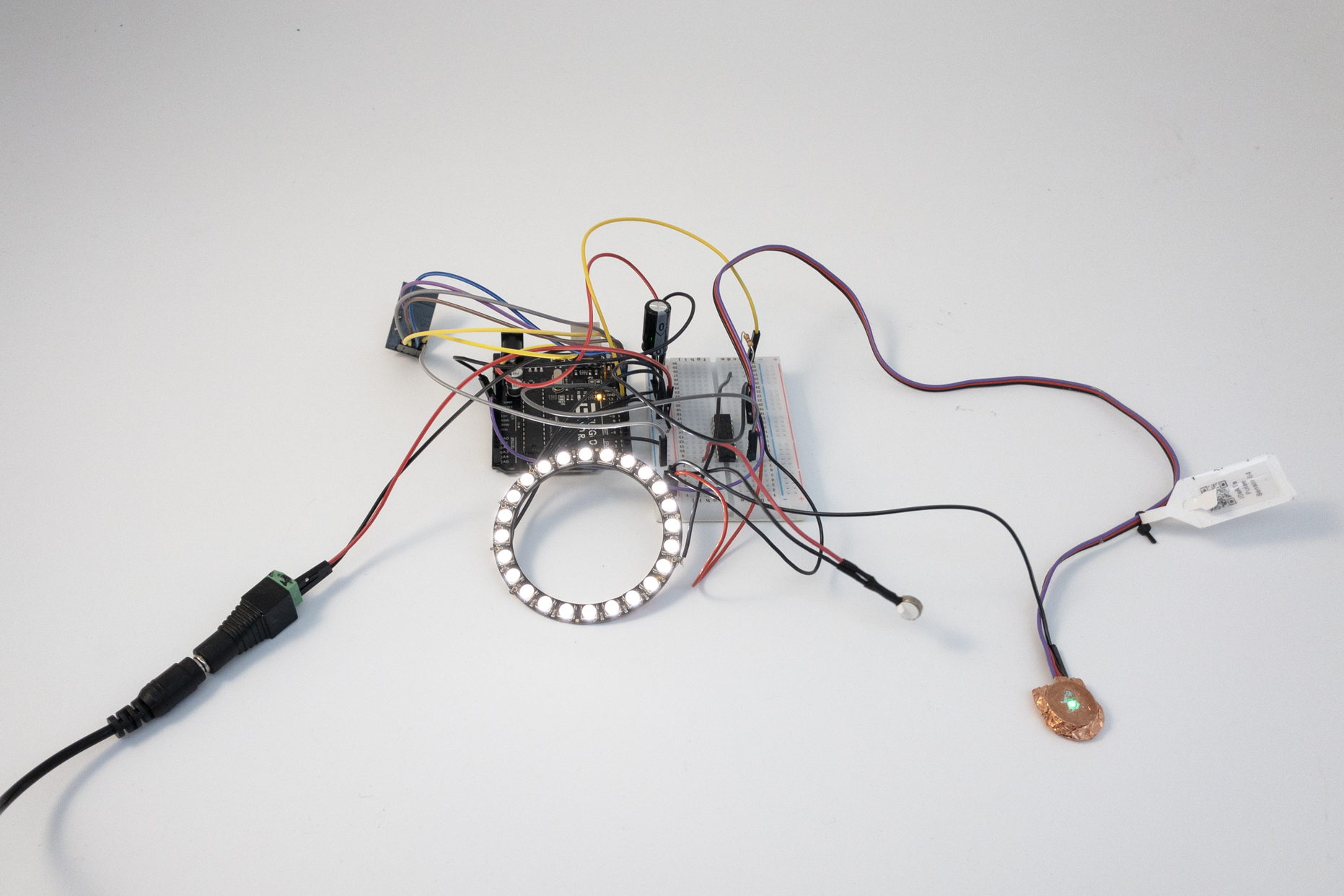 The development/testing setup with components plugged in to a breadboard. Included are a pulse oximeter, vibration motor, LED ring, and wireless communication module. 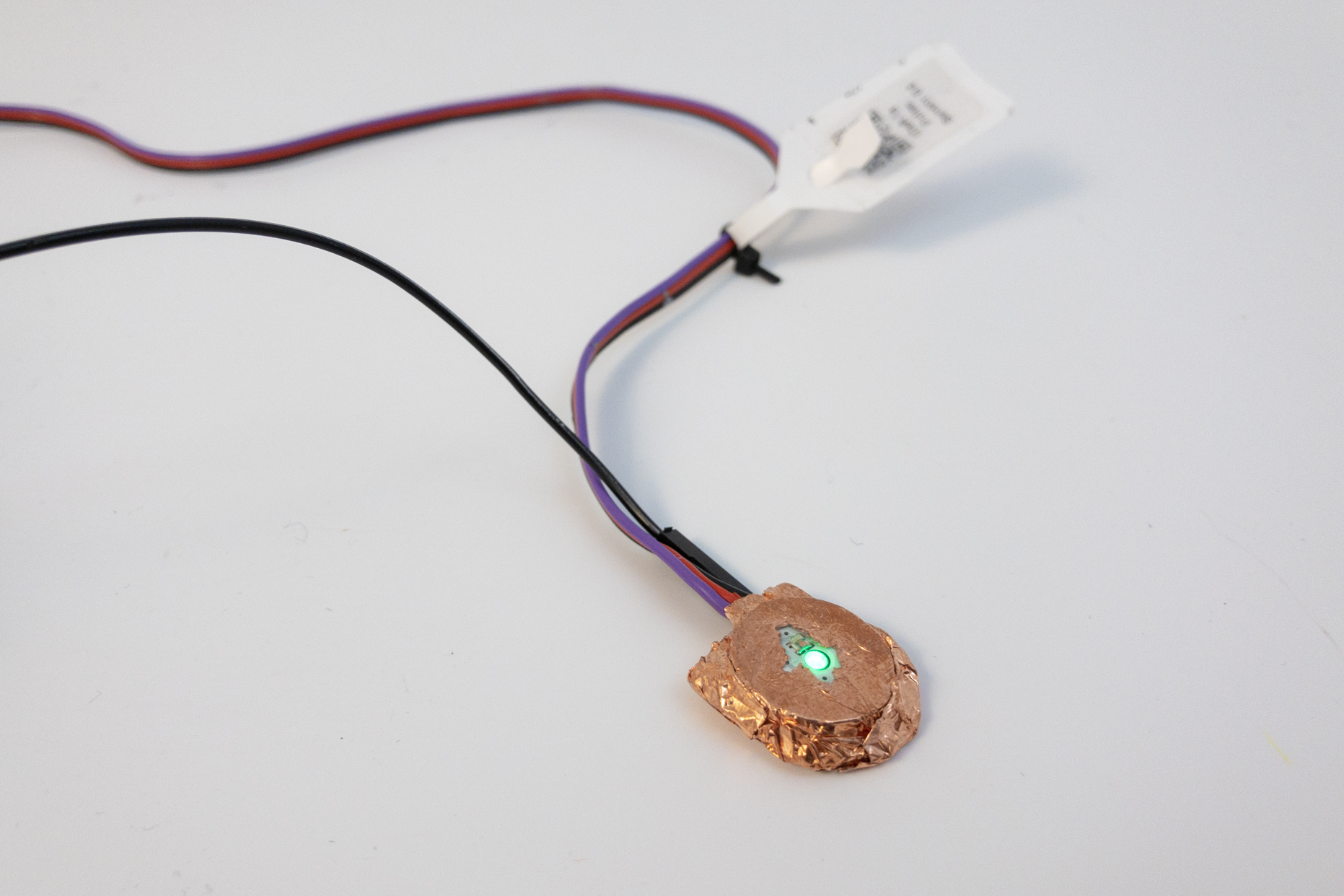 The pulse oximeter (called a “Pulse Sensor Amped”) exhibited large amounts of interference, particularly around moving metal objects. We tried creating a Faraday cage around the part to shield it from such effects, but success was limited. 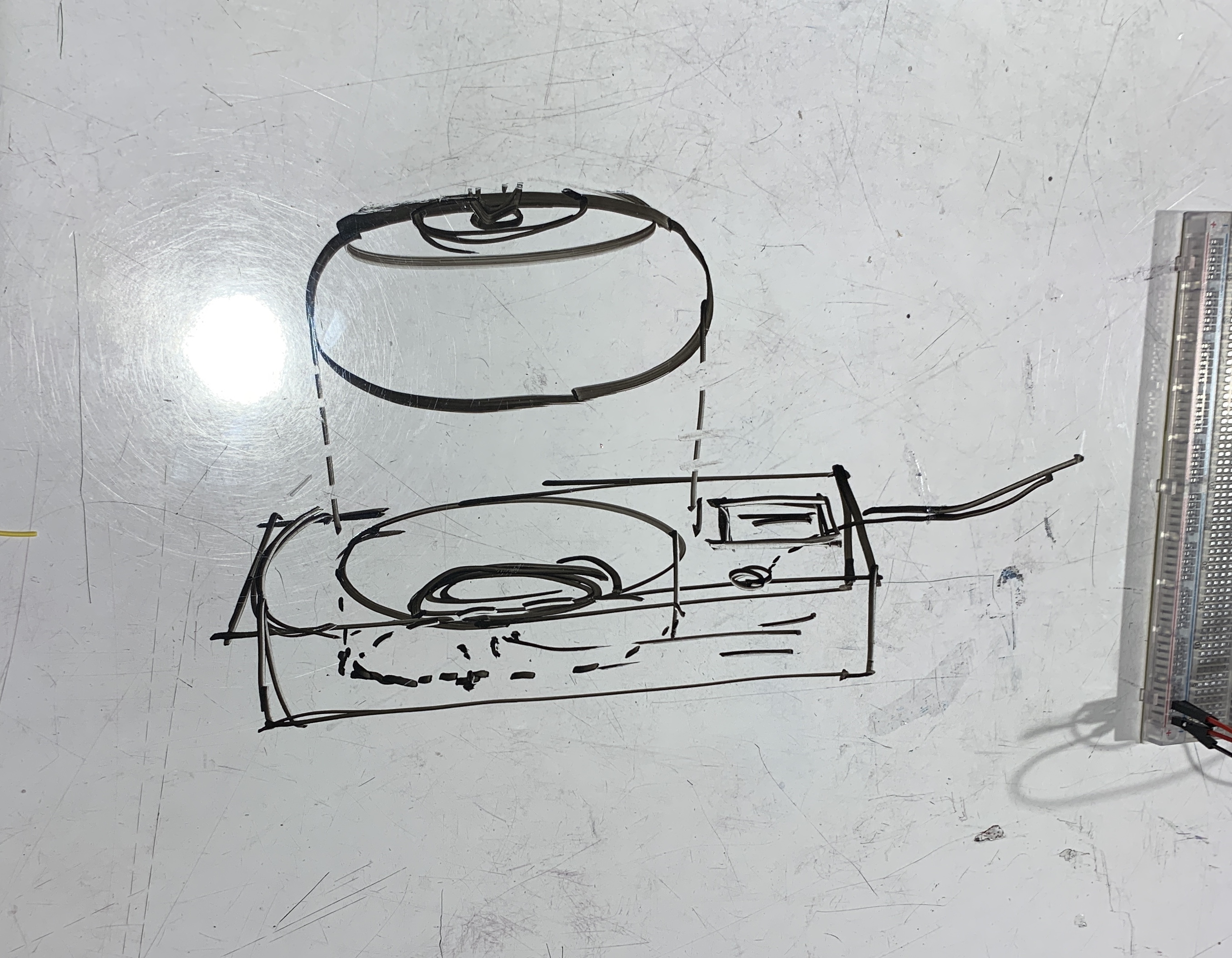 A sketch of how we envision our device: a portable pebble-like device EIinor can take on the go, that has a dock where she can charge it and see historical data related to her heart rates. 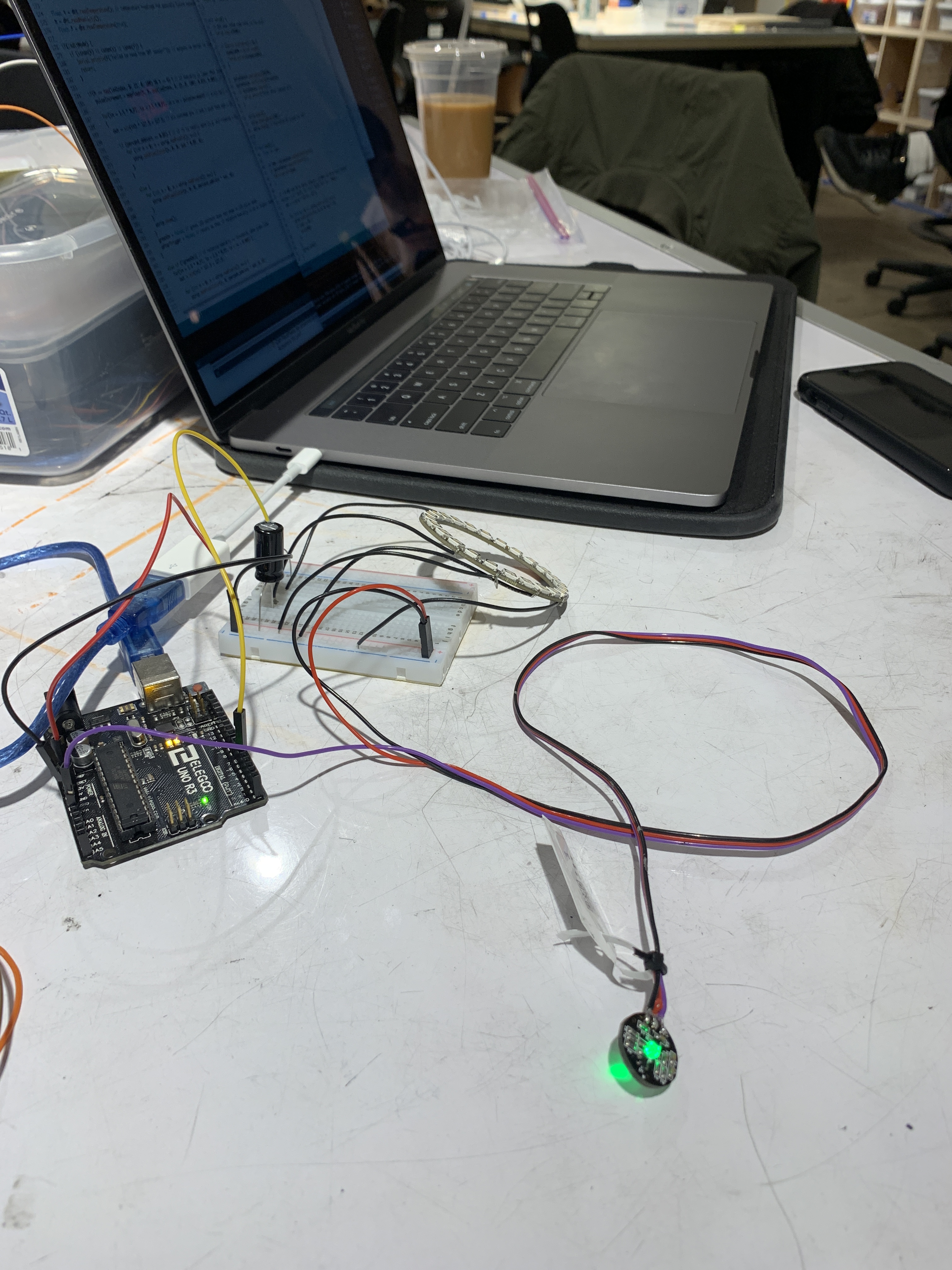 The first electronics part we tackled was the heart rate monitor and synchronising the readings with the LED ring. 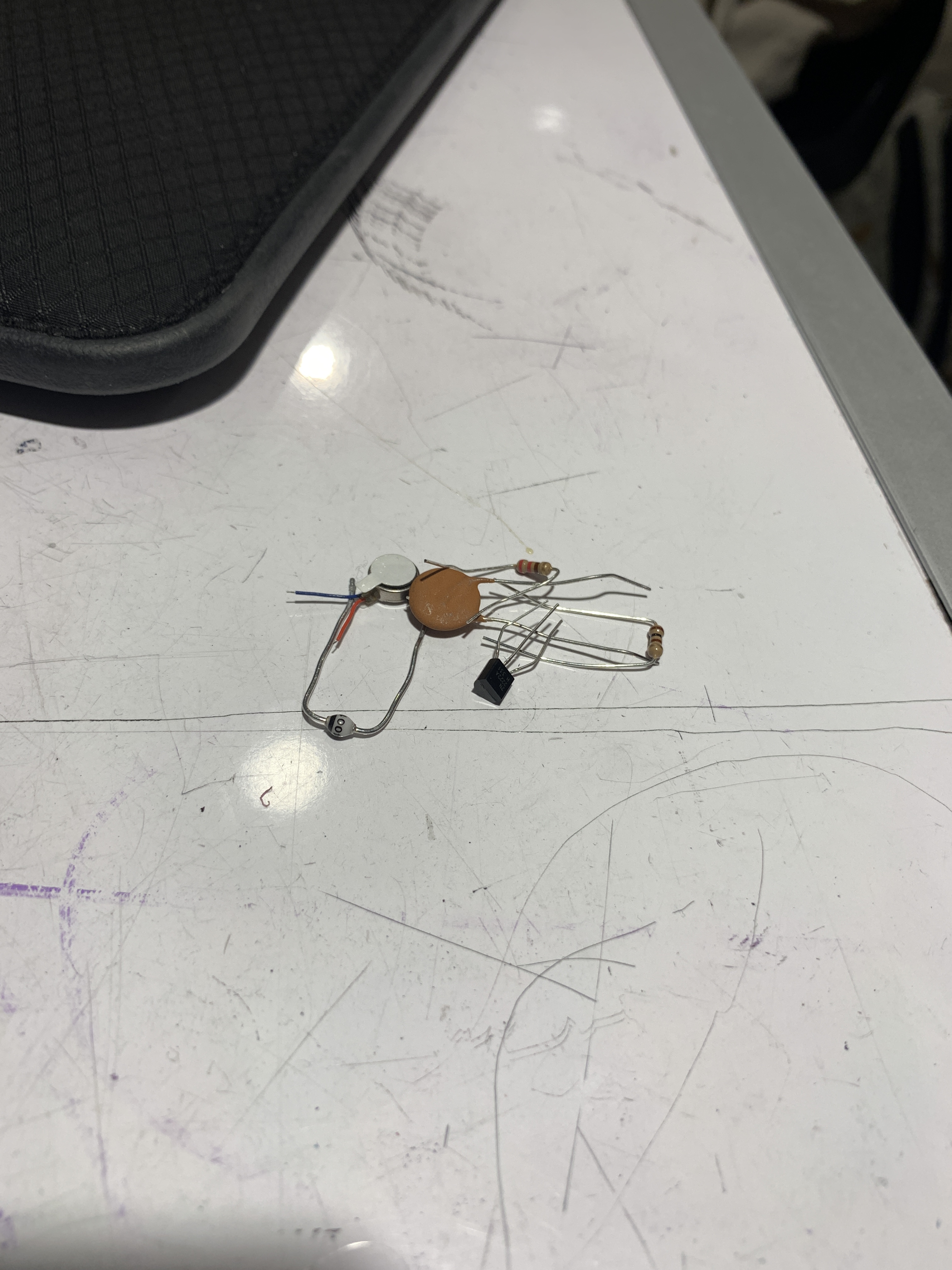 We were originally using all of these parts to wire our vibrating motor, but we learned soon after that we could just use a ULN2803 transistor instead. 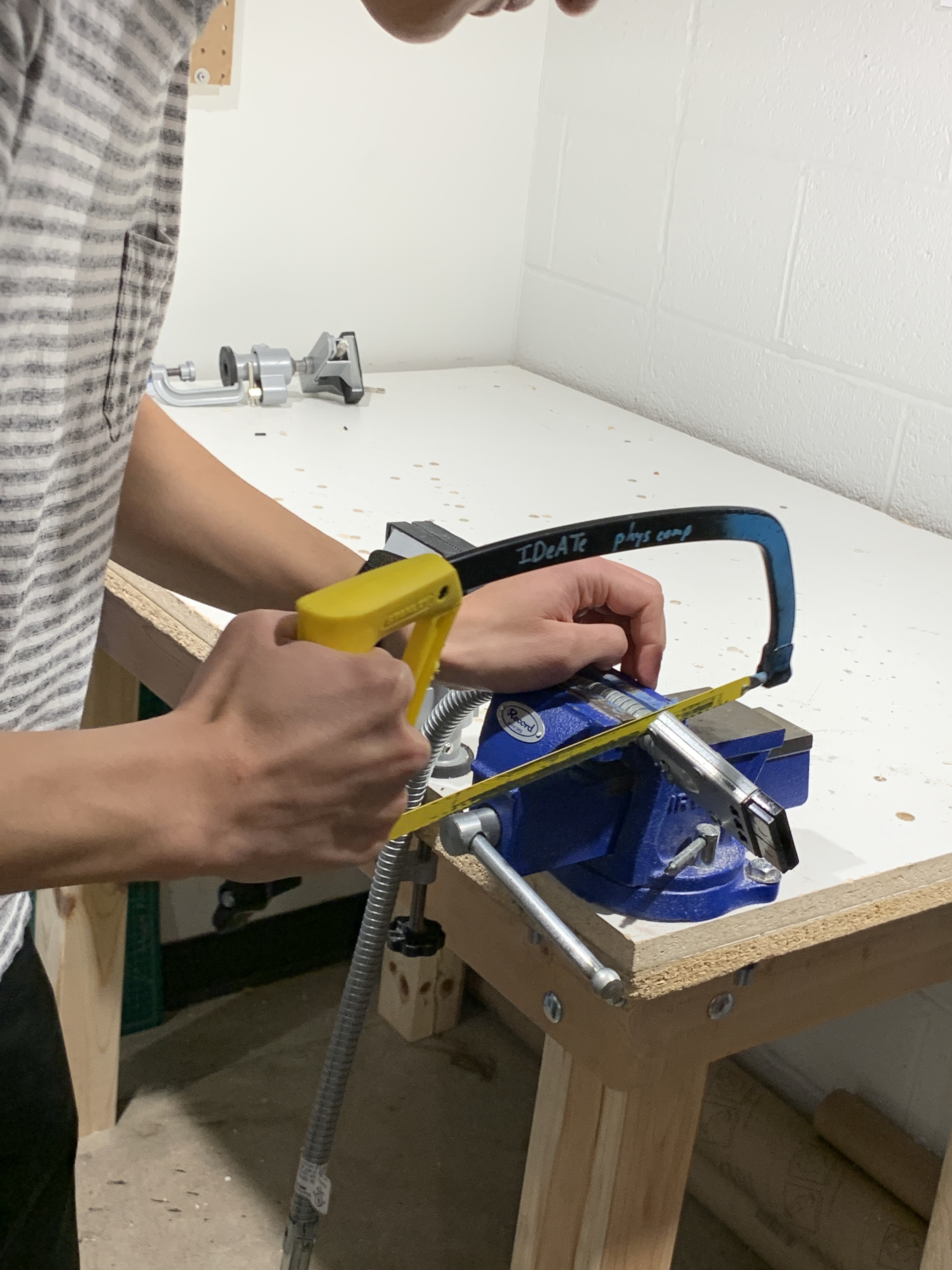 Ian is working with a metal tube that we intended to use over our heart rate monitor because we were running into weird issues with interference from nearby metal objects. 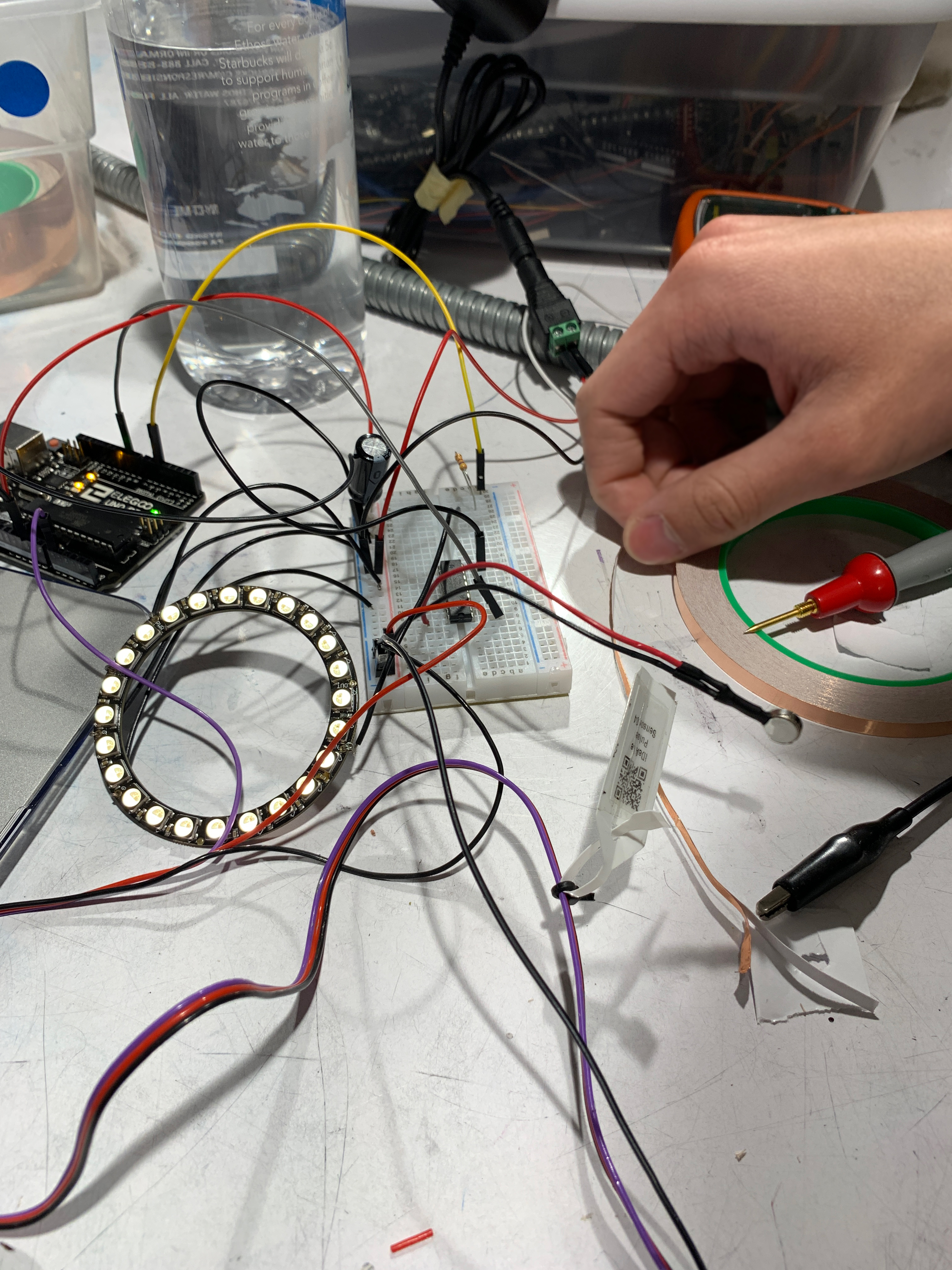 After adding all our basic components (LED ring, heart rate sensor, vibrating motor) it was kind of crazy and we were working to make things as organised as possible, but we were nearing the end of our prototype building. 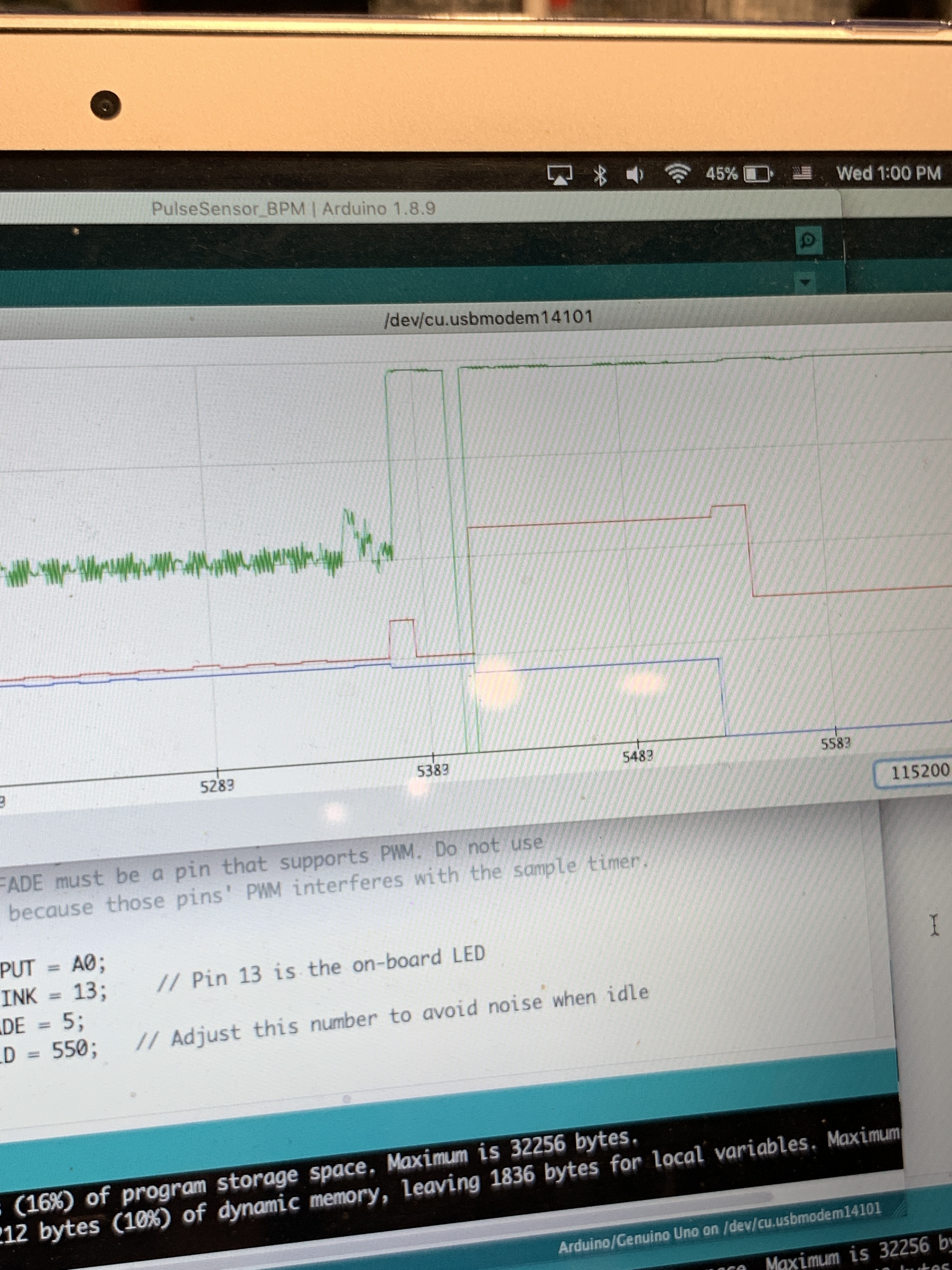 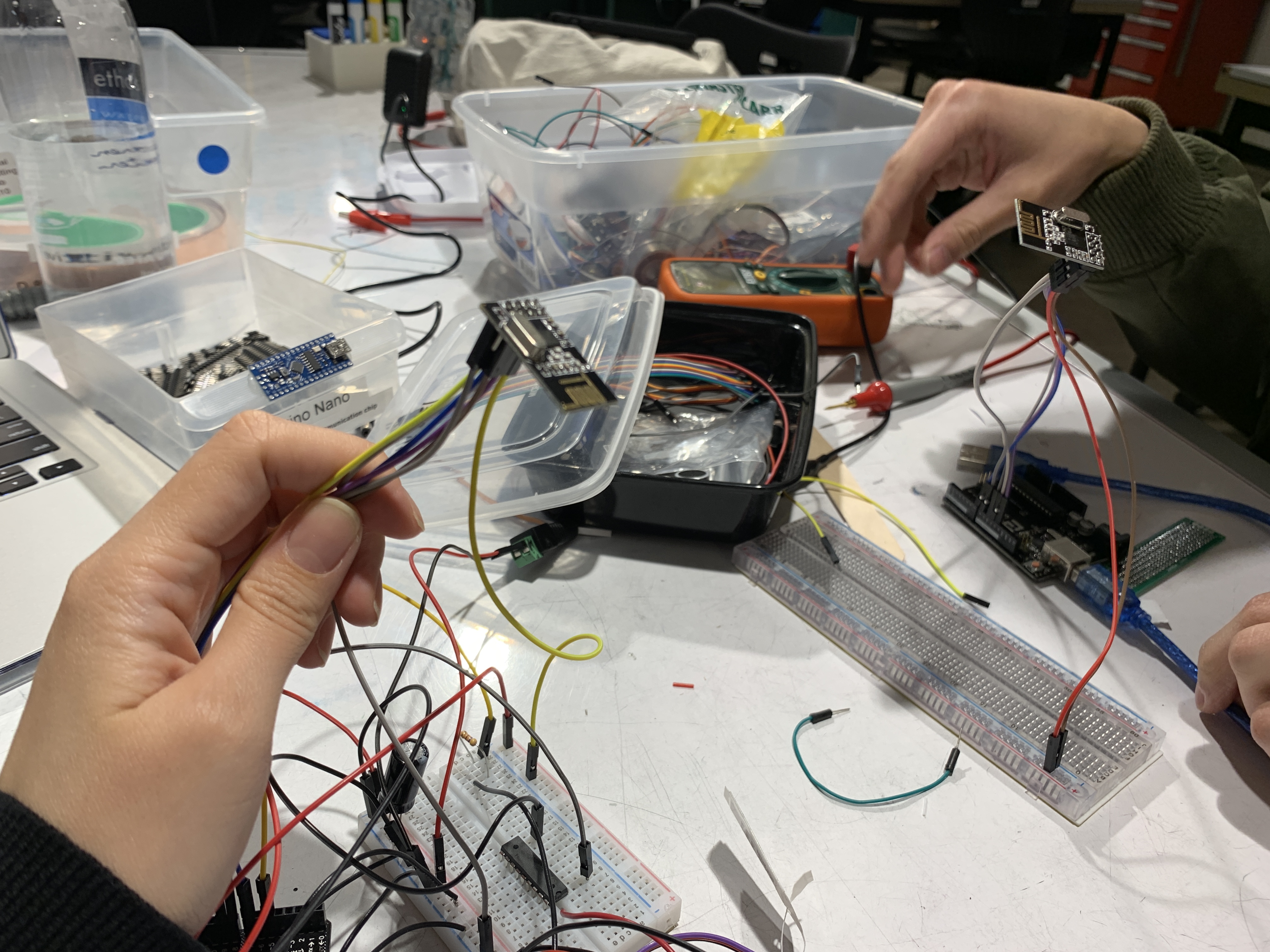 Another feature we worked on was remote data transmission and receiving between 2 Arduinos, so that Elinor can receive data from her portable device on her dock. 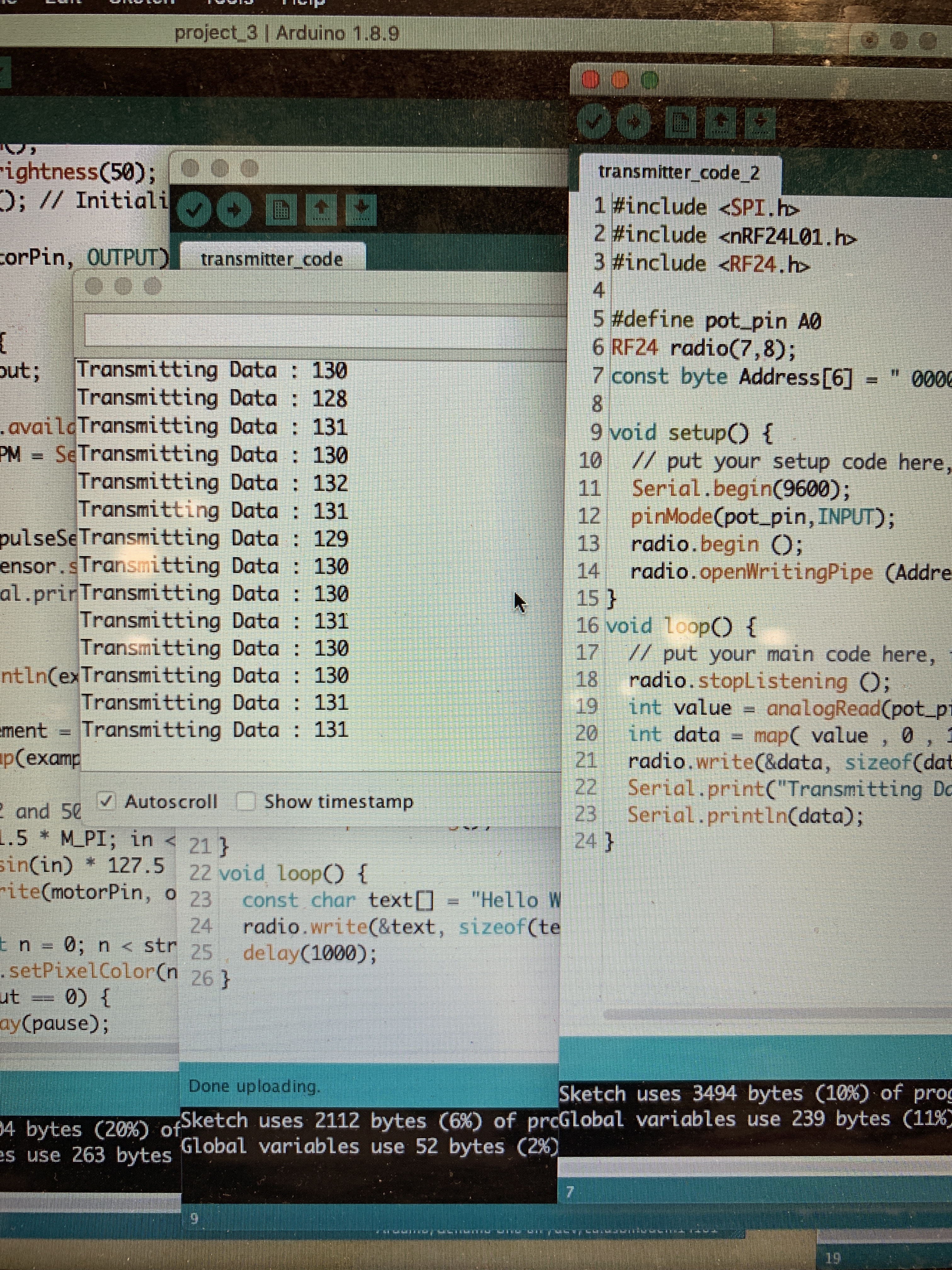 The code for the transmission side of the data transmission/receiving. It took a couple of tries but it ended up working! 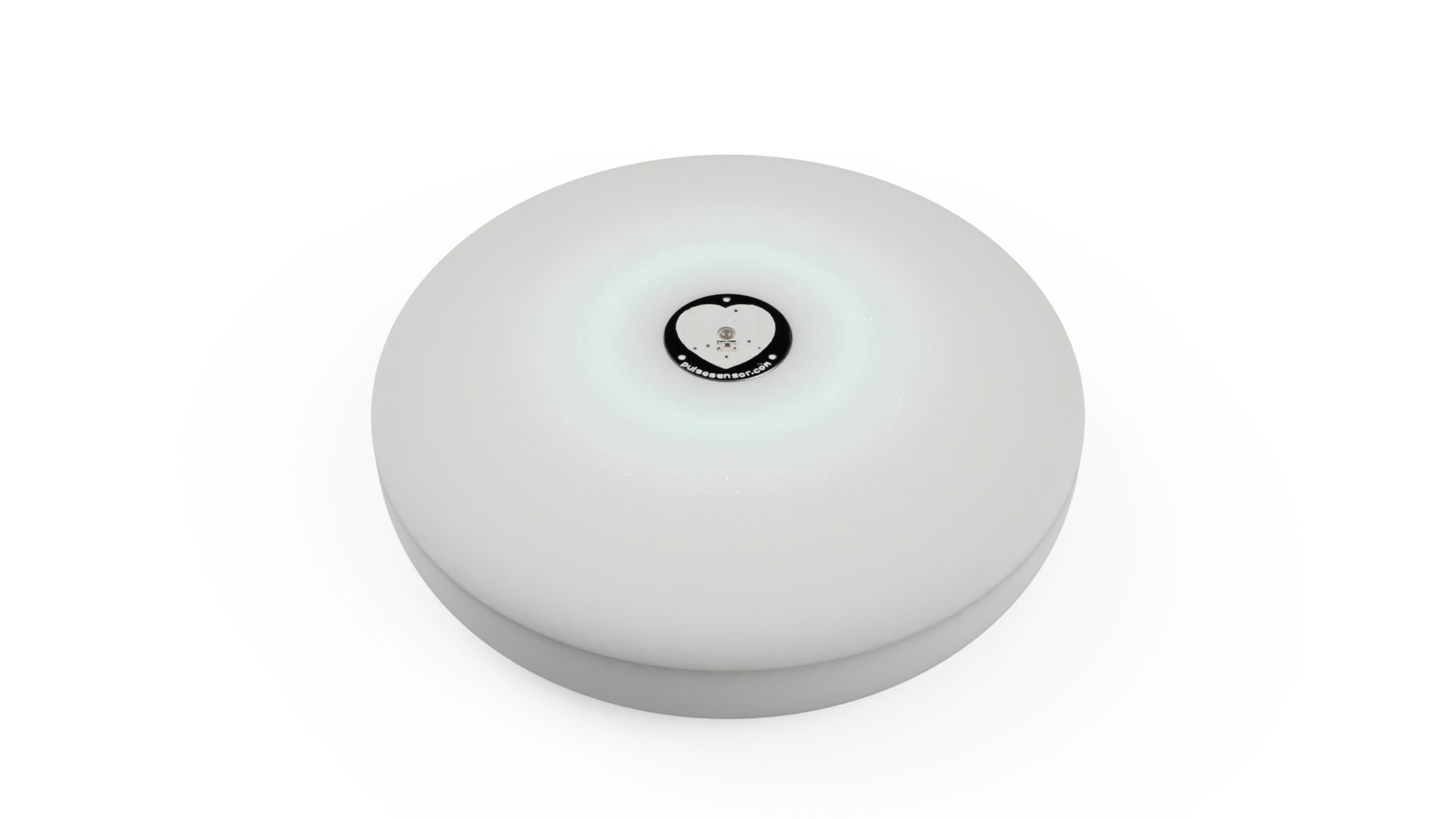 A concept for what the mindfulness device could look like. The LED ring is embedded beneath the surface and diffuses through translucent material. 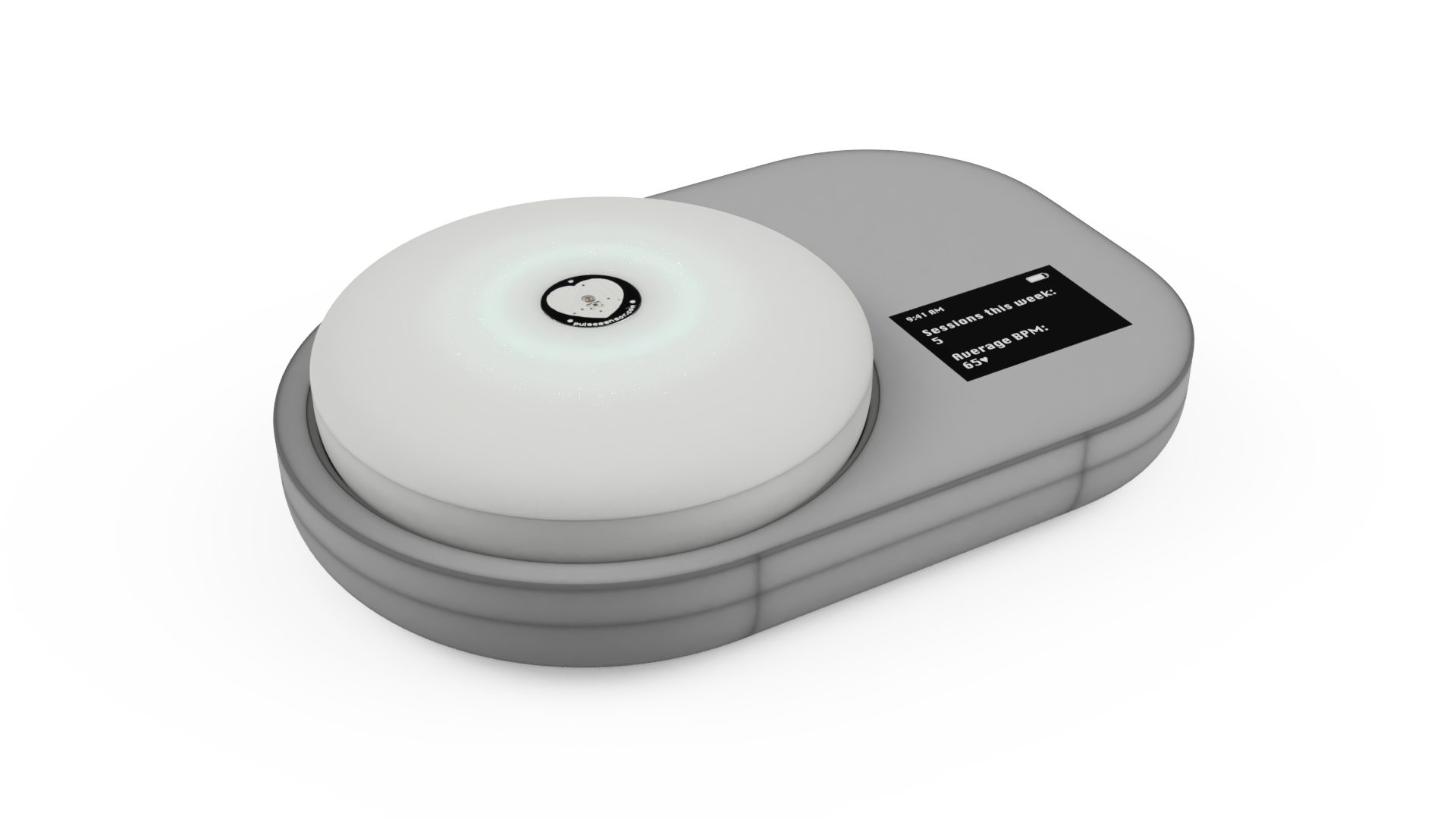 At the end of a day, the “pebble” can be set in its dock to charge and sync data. 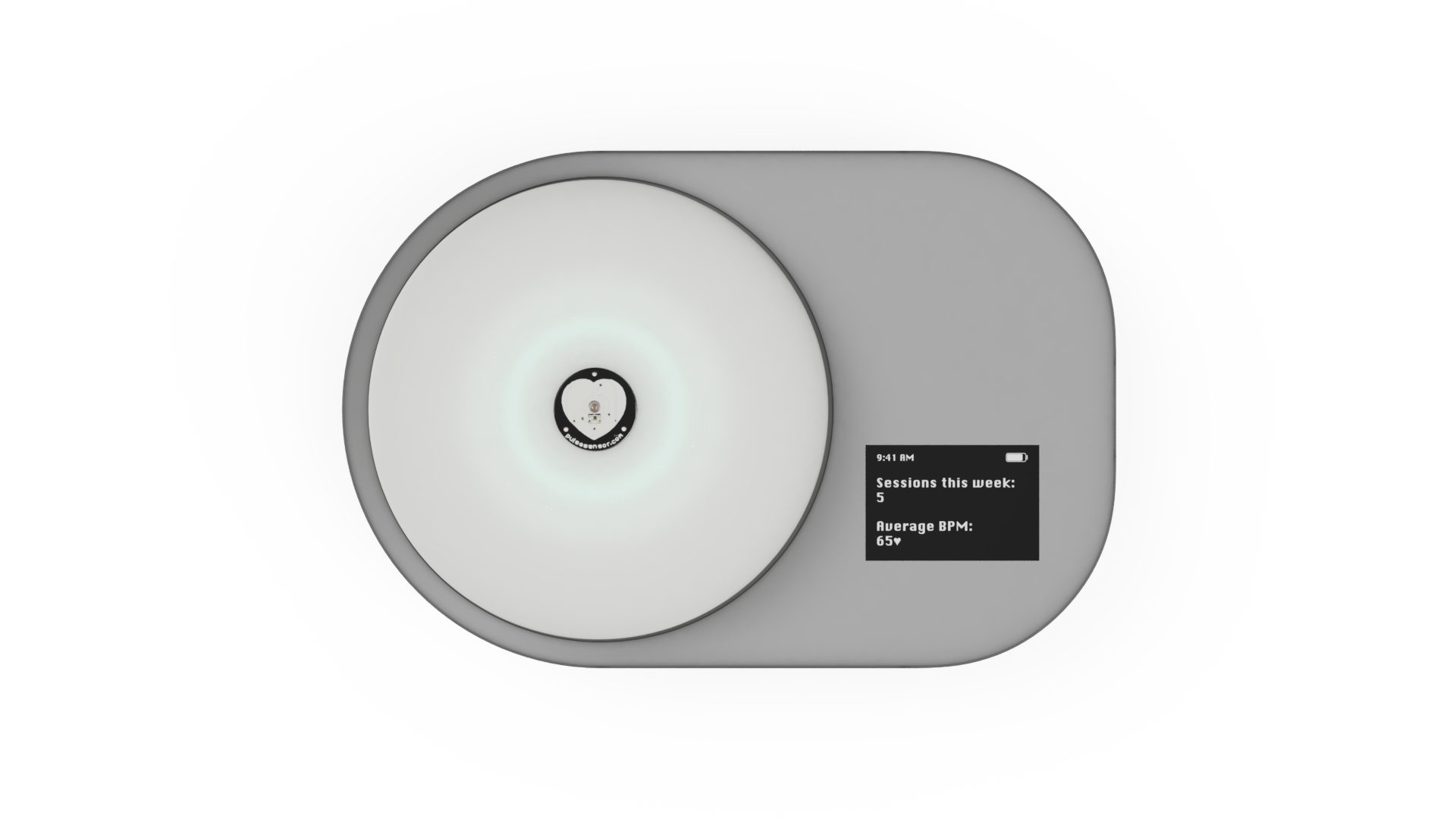 An LCD on the dock provides insights and trends regarding number of sessions a week and heart rate trends.

When we first started working on our prototype, we mainly ran into some major issues with the heart rate sensor. On the first couple of days we worked with the part, readings were really stable and showed a lot of promise for our prototype, but some days that we went into the lab to work on it– the sensor would show odd readings that weren’t actually corresponding to our heart rate when we also used other devices like a smartwatch. After testing different theories, we found out that waving metal objects like our phones was causing the readings to spike and dip weirdly.  We tried working with a code and adding in some smoothing functions as well as some hardware solutions like covering the part with a metal tube, and ended up wrapping most of the sensor in copper to mitigate the interference of nearby metal objects. For our prototype demo, we inserted code so that BPM can be entered and different speeds of haptic feedback and LED patterns can be visualised.

Some other challenges were related to synchronising the heart rate monitor with both the LED ring and vibrating motor. We wanted both parts to “pulse” in correspondence with the heart rate detected, so that a higher heart rate would map to a faster pulsing and similarly for a slower heart rate. Figuring out the right speed for this pulse took some trial and error and some running up flights of stairs to test for elevated heart rates, but we were able to add in a function that both of us were satisfied with.

The crit on April 8, especially our consultation with Elinor, was really helpful in gauging how Elinor felt about the device at its current state and what she wanted to change about it. She had several ideas for us related to adding in more functionality specifically related to mindfulness, the ergonomic factor of the device shape and sensor placement, and the pulsing component. Elinor was concerned that the device would only act as a heart rate monitor, and suggested adding in some voice control or voice recording playback that plays guided messages of meditative exercises. It was useful to know this information and definitely got us thinking about how we might add in some more functionality without losing the simplicity of the device, since we wanted this to also act as a sort of tactile device that Elinor can physically interact with.

After seeing our renderings, Elinor also mentioned that the placement of the heart rate sensor (on the top surface, right in the middle) could hinder her from being as relaxed as possible, since it isn’t a natural grip for her. The placement of the sensor could possibly be changed from the top to the side of the device so that it reads her heart rate while she holds the pebble in her hand without needing to consciously move her finger to the center.

Moving forward, we definitely want to keep Elinor’s considerations at the forefront and work on adding in more functionality that guides her through some relaxation exercises. Due to technical limitations we are unsure if we will be able to implement interactive voice features or voice control, but working on a voice/sound related feature is something to focus on. We are also thinking about creating playlists of calming and meditative music that Elinor can listen to as a supplement to her usage of our device, or a similar solution. After adding some more functionality and finishing up the portable device, we are going to work on the dock and its related features such as charging and data aggregation. The fabrication of the device itself is also really important to us and we want to make sure to have enough time to create a relaxing-looking and feeling device (likely 3D printed).

Additional modes have to also be implemented. Examples would be the lighting/haptic sequence signaling to get ready for a session and different patterns at the end of a session: a sequence to indicate a good session and another to indicate that another session may be in order. Synchronization also has to be hashed out (what the LCD interface looks like, what data is displayed on it, how charging and synchronization works on the backend and human-facing, etc.) Although most major components have been connected to the Arduino with basic functionality, the greatest challenges lie ahead: implementing all necessary features elegantly and effectively and combining electrical components with the physical enclosures.