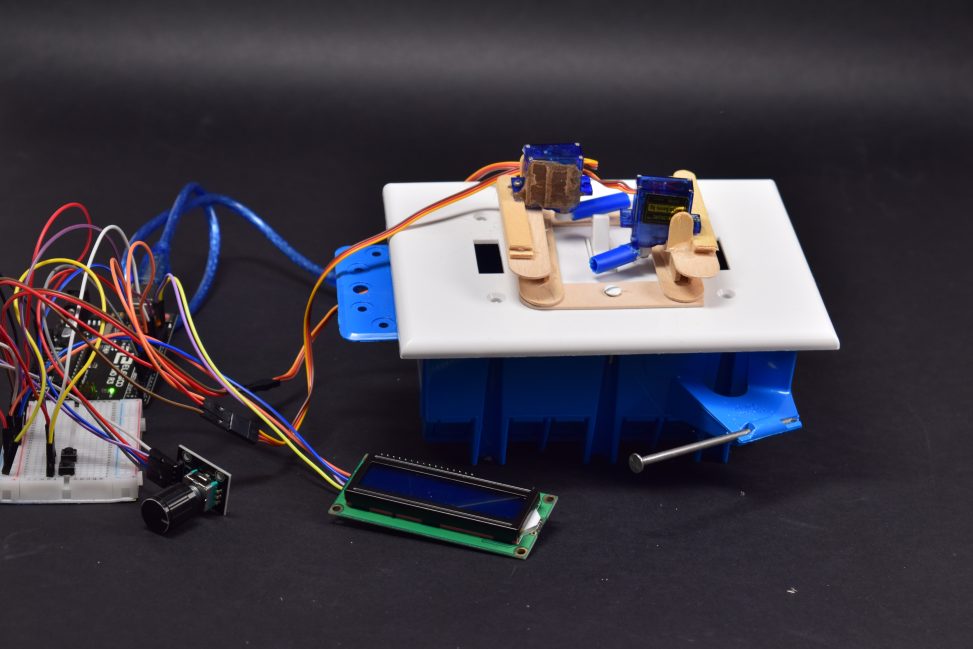 After our meeting with Kathy, we decided to create an automated light switch on a timer. Kathy explained to us that when she had guests over she would have to say goodbye downstairs, go up the stairs, watch them leave from an upstairs window, then go back downstairs to turn the porch light off. We wanted to help her streamline this process.

This prototype’s behavior is exactly how we intended to implement the final device’s functionality. The rotary encoder allows the user to spin the dial to set the amount of time that the light will stay on. The time being chosen is displaced on the LCD display and then the countdown until the light will be switched off is displayed once the timer has started. Pressing the rotary encoder starts the timer. There are also two manual buttons: one for turning the switch on and one for turning the switch off. 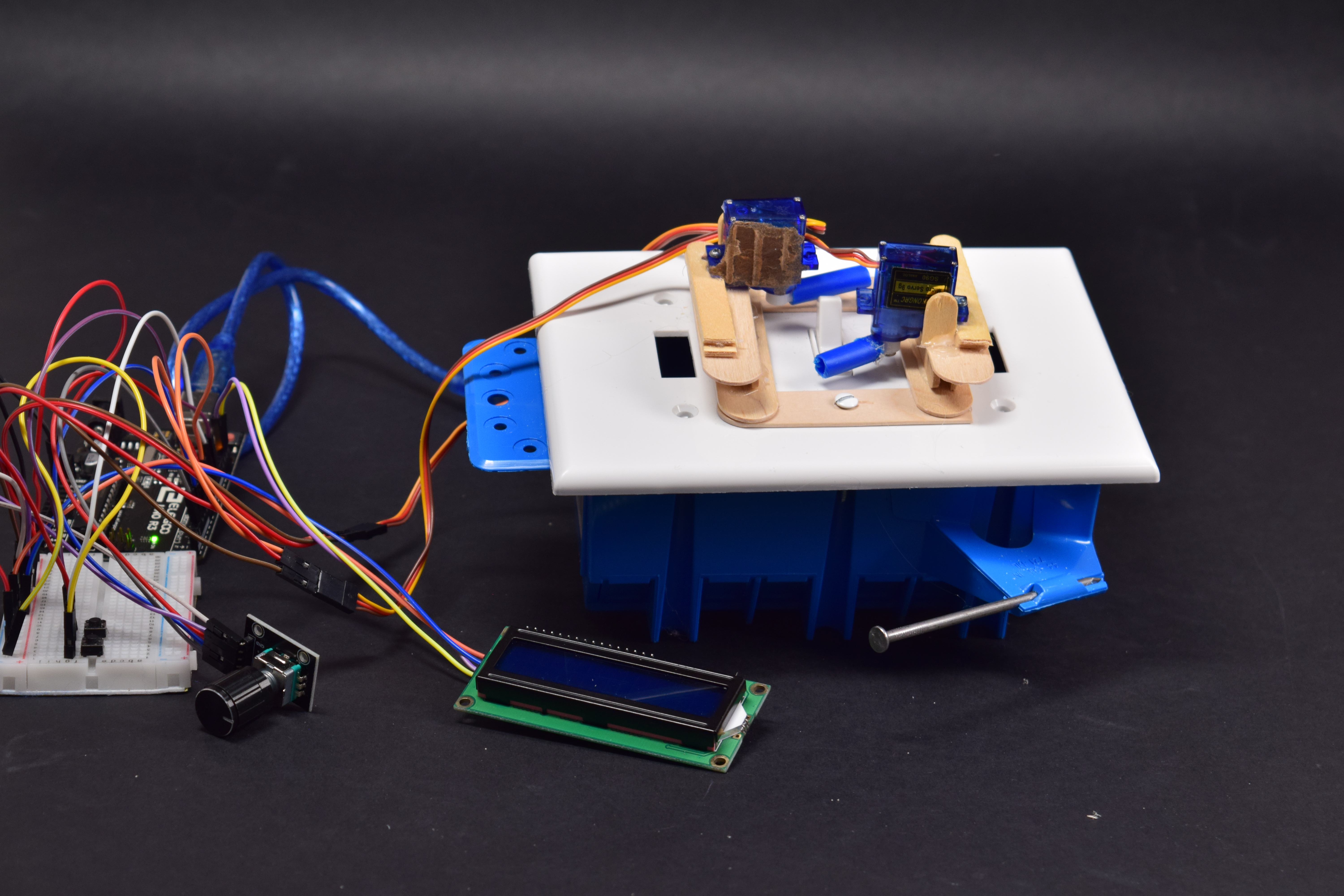 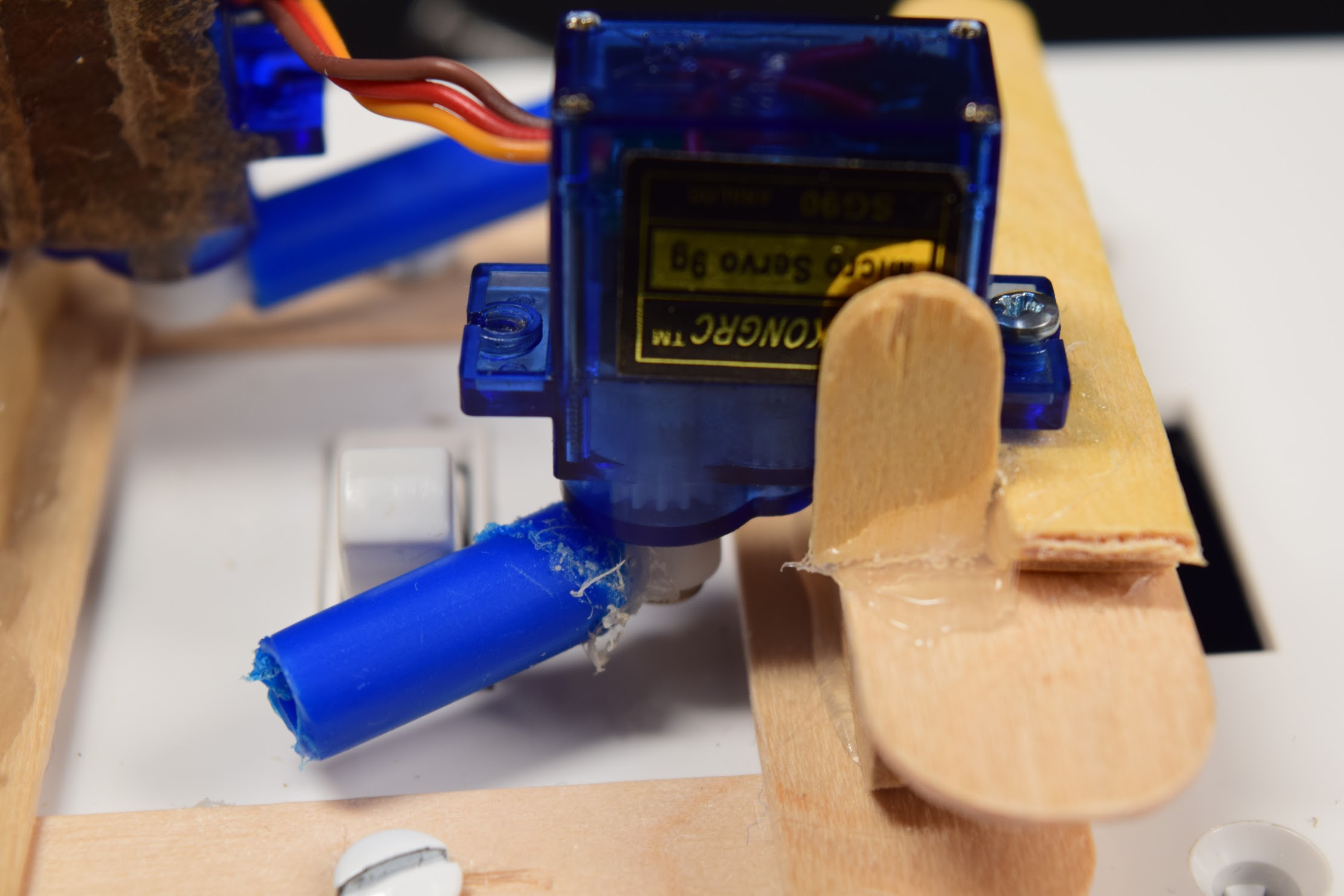 Closeup of the servos used 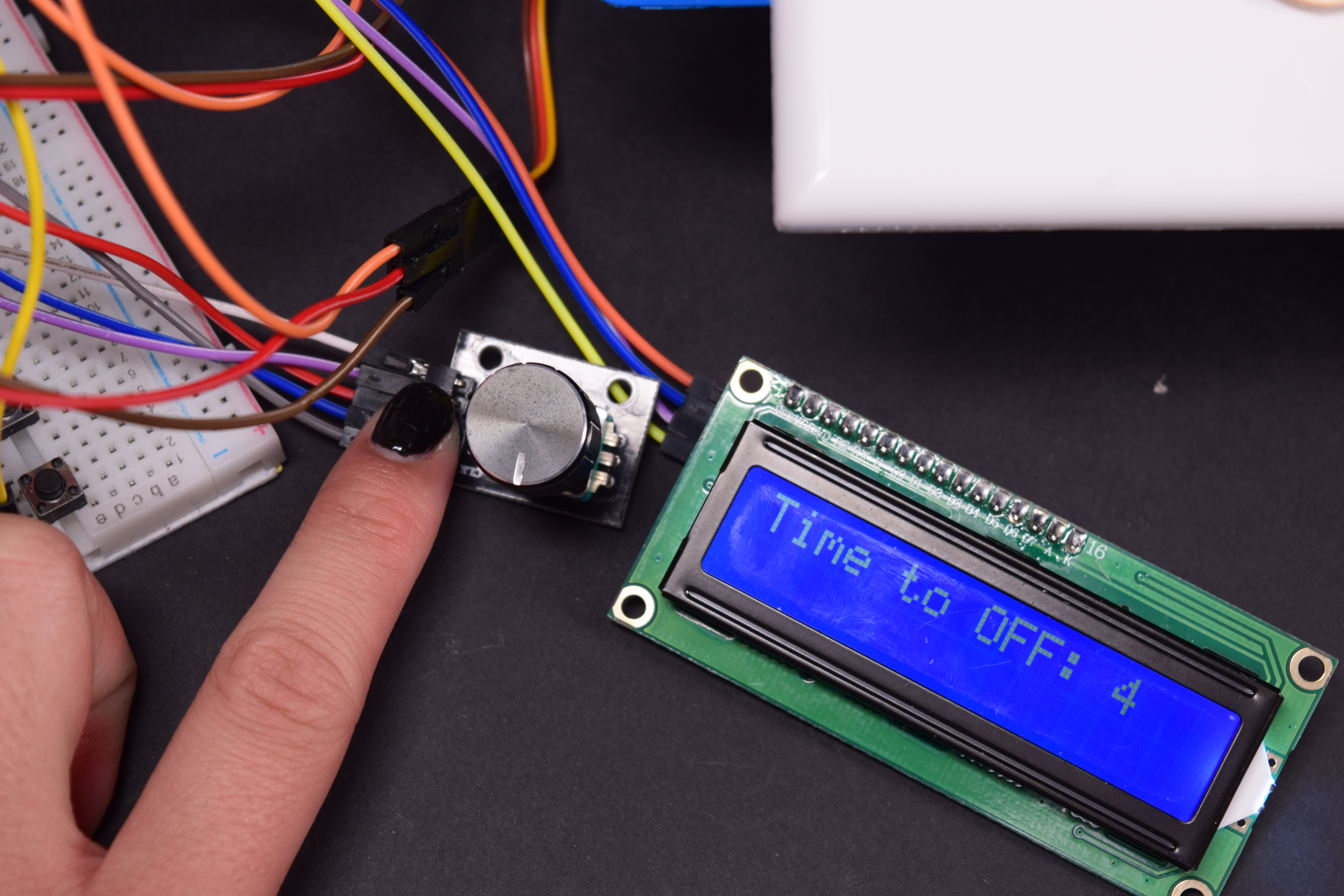 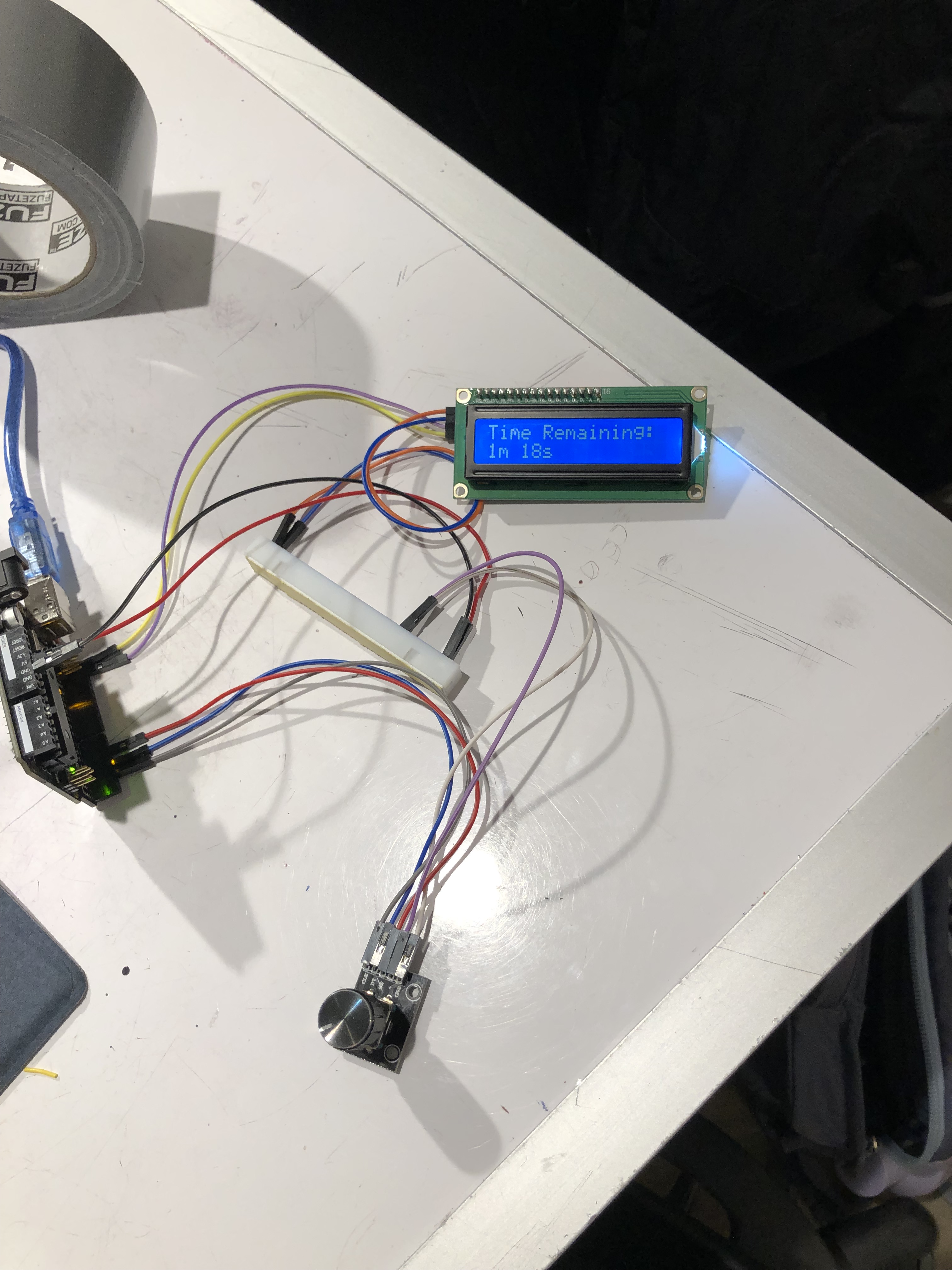 We got the LCD screen to display the time until the light will be switched off. 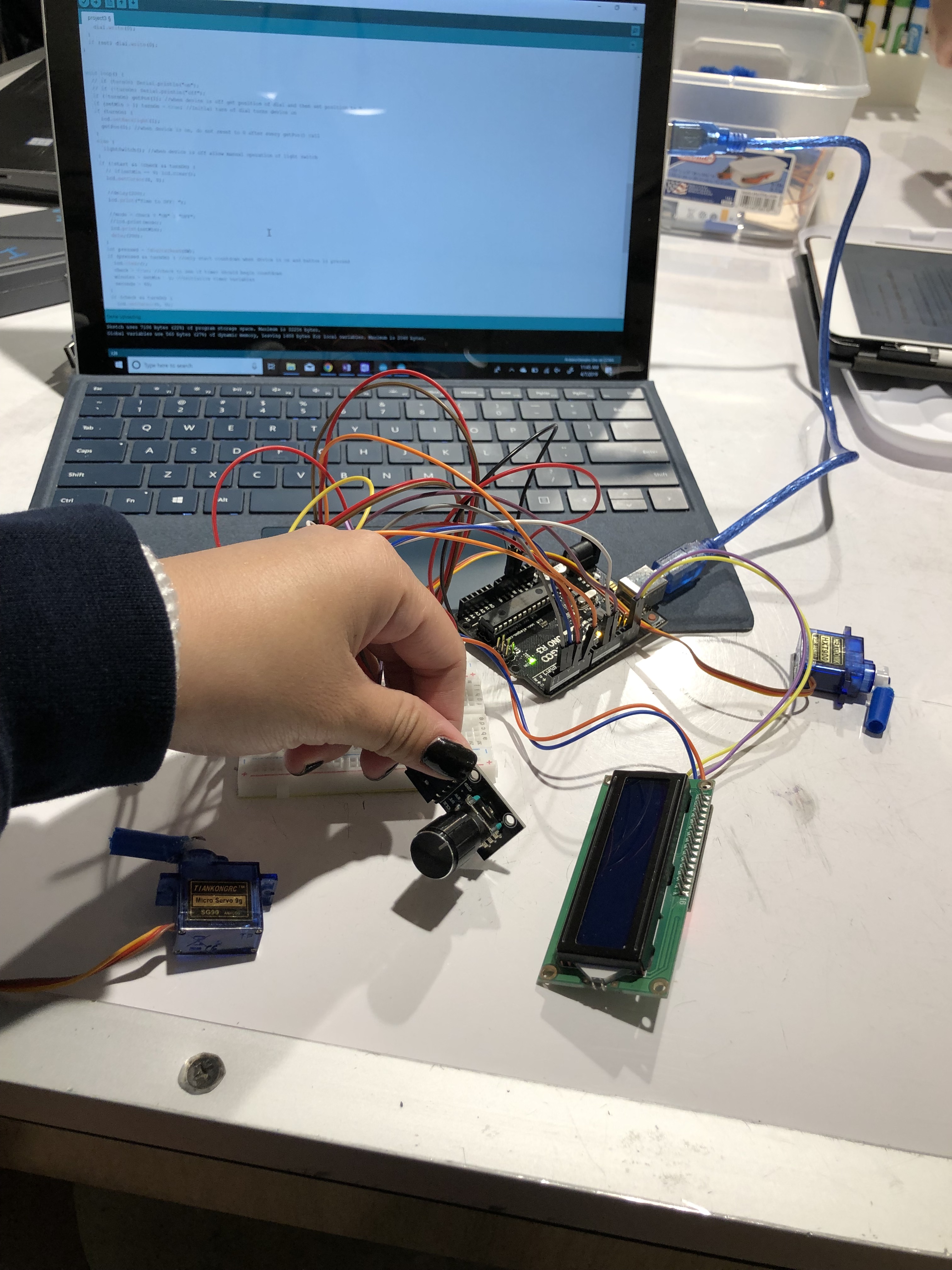 The display/UI elements only, with the code. We decided upon a knob for the timer and an LCD display to show the time. 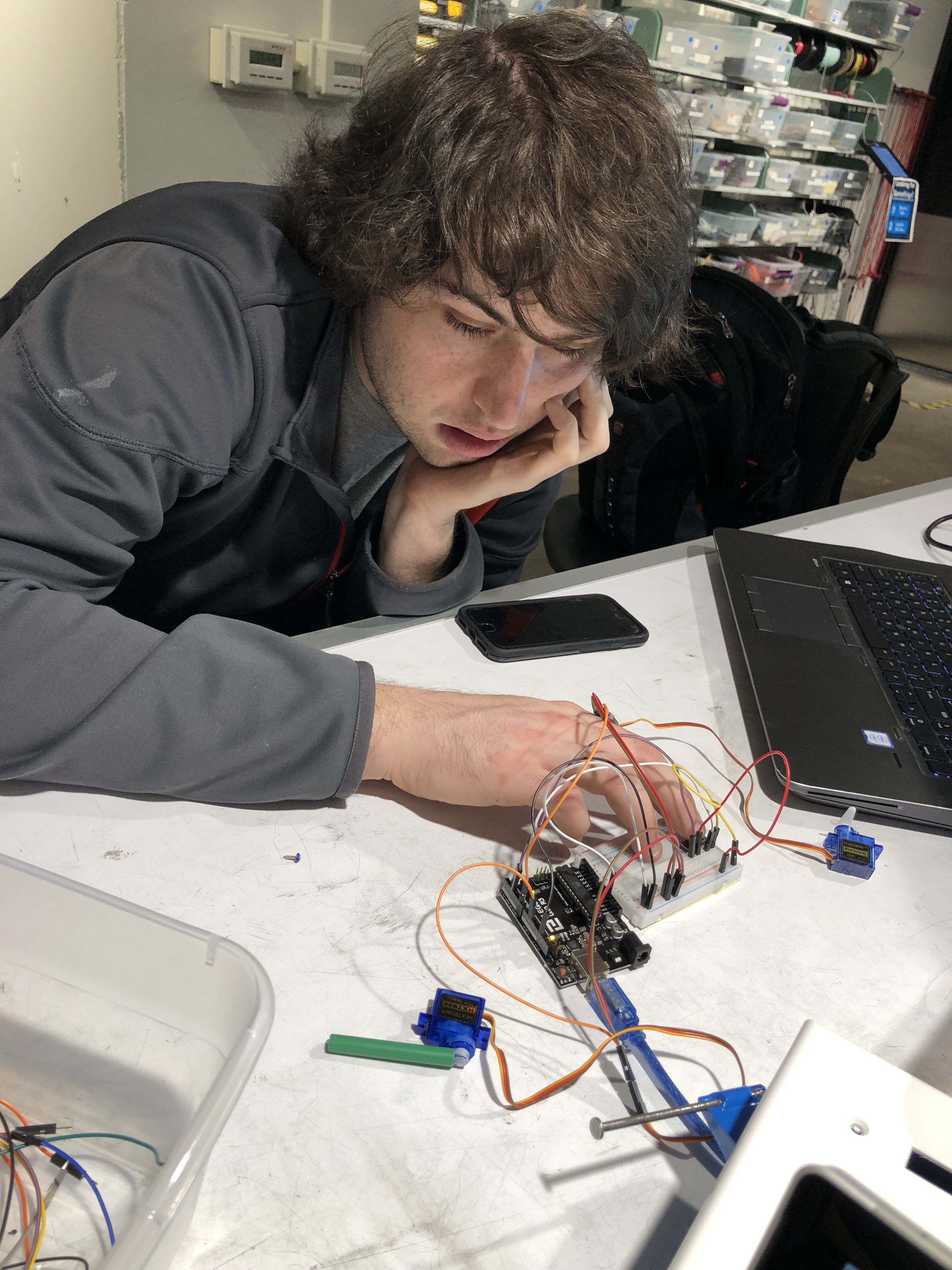 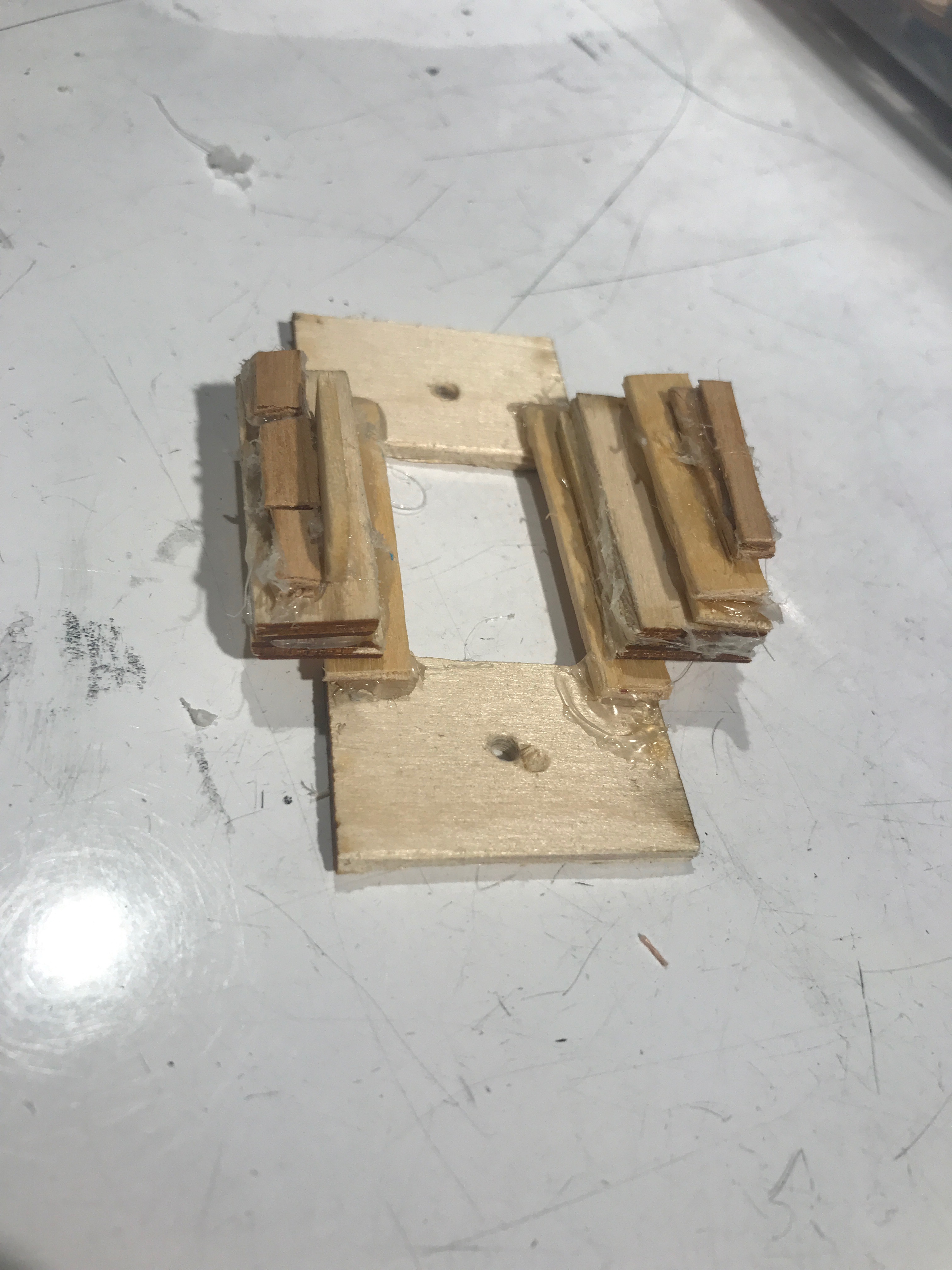 The earliest mount prototype. We decided not to use this mount because we had difficulty fixing the servos onto it. 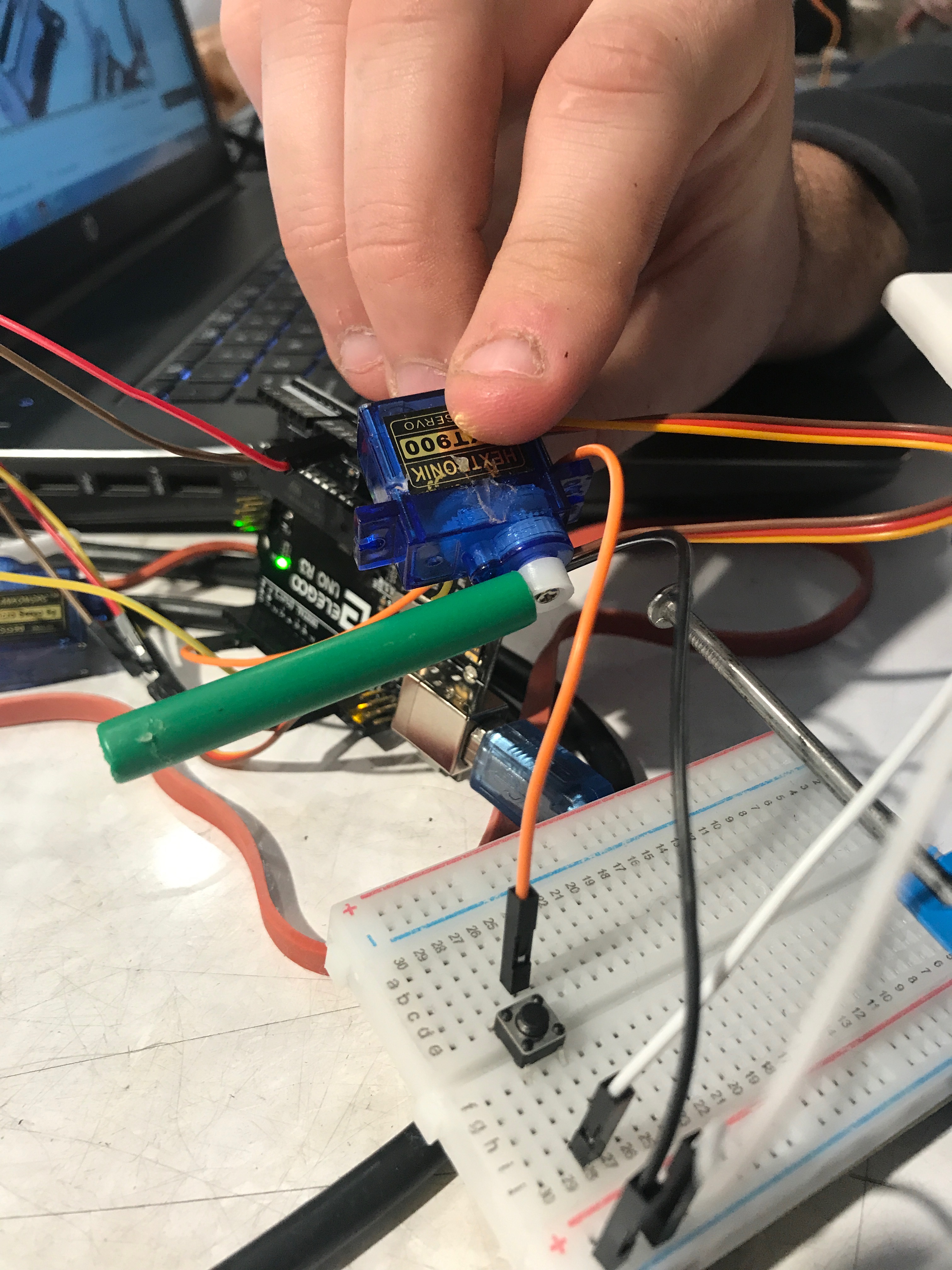 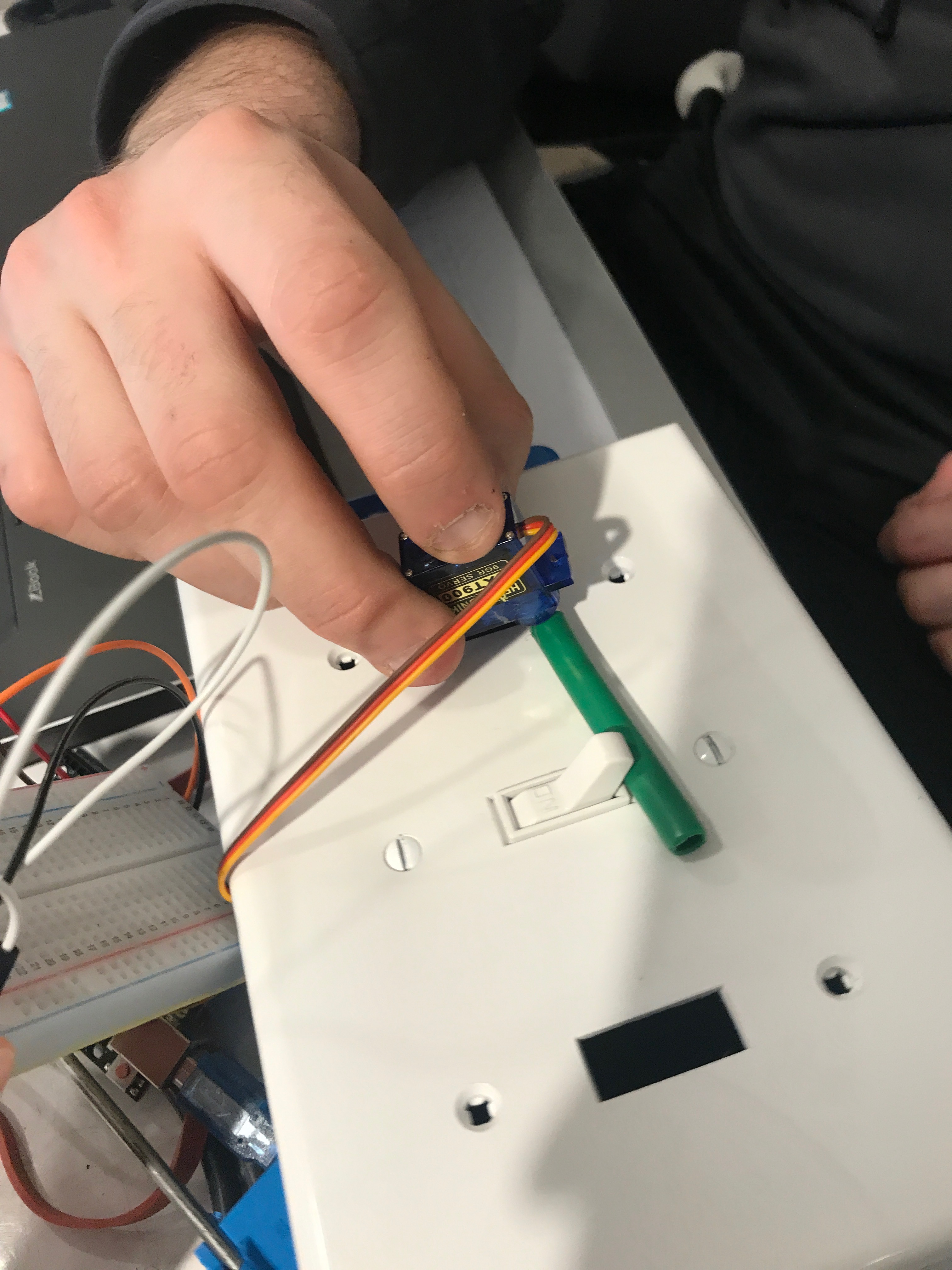 The servo arm with the switch.  Here we are determining how long the to make the lever for it to be effective. 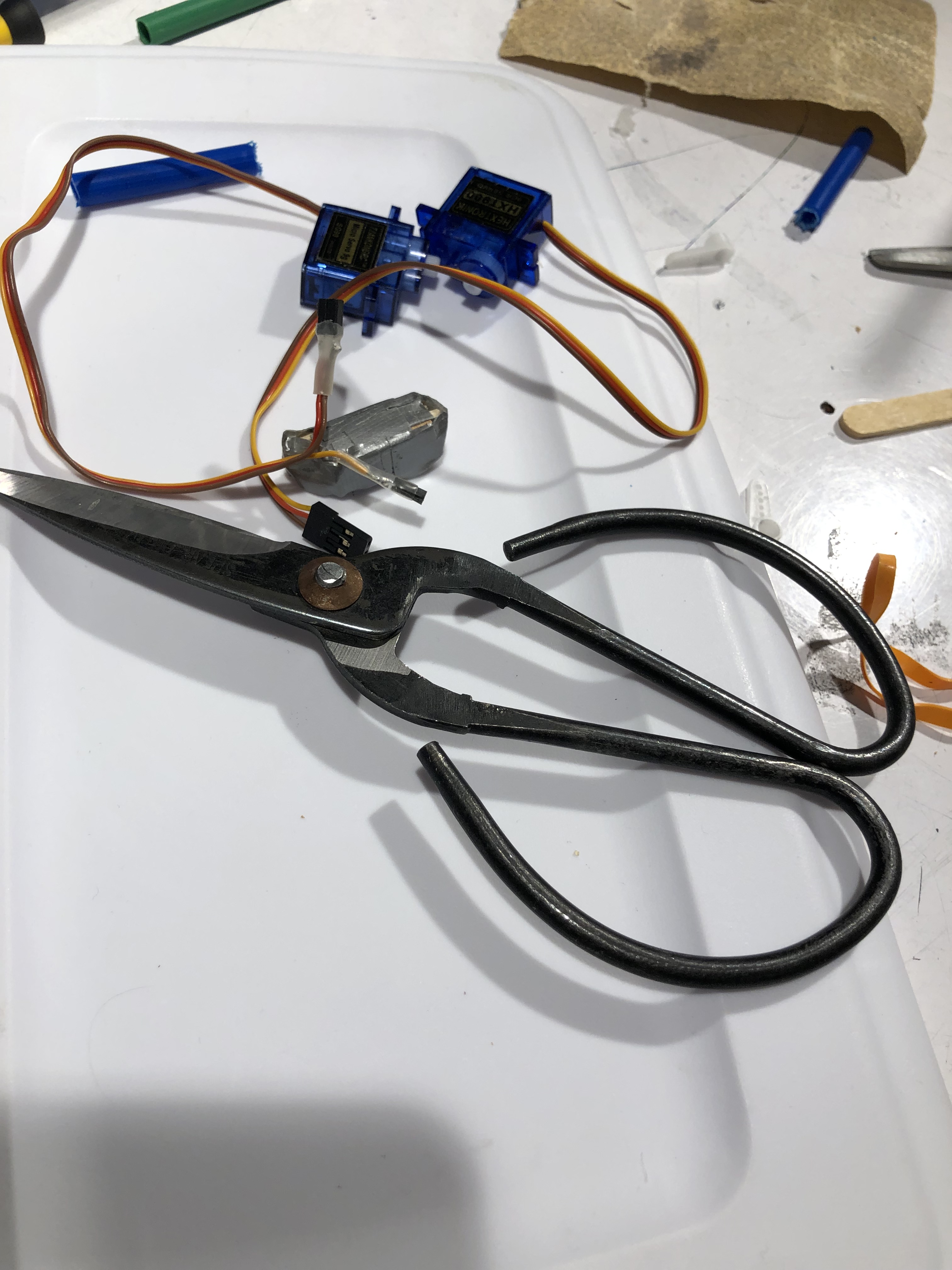 Starting work on the servo mount. Initial attempts were made with small pieces like the duct tape block shown above, which ultimately was ineffective. 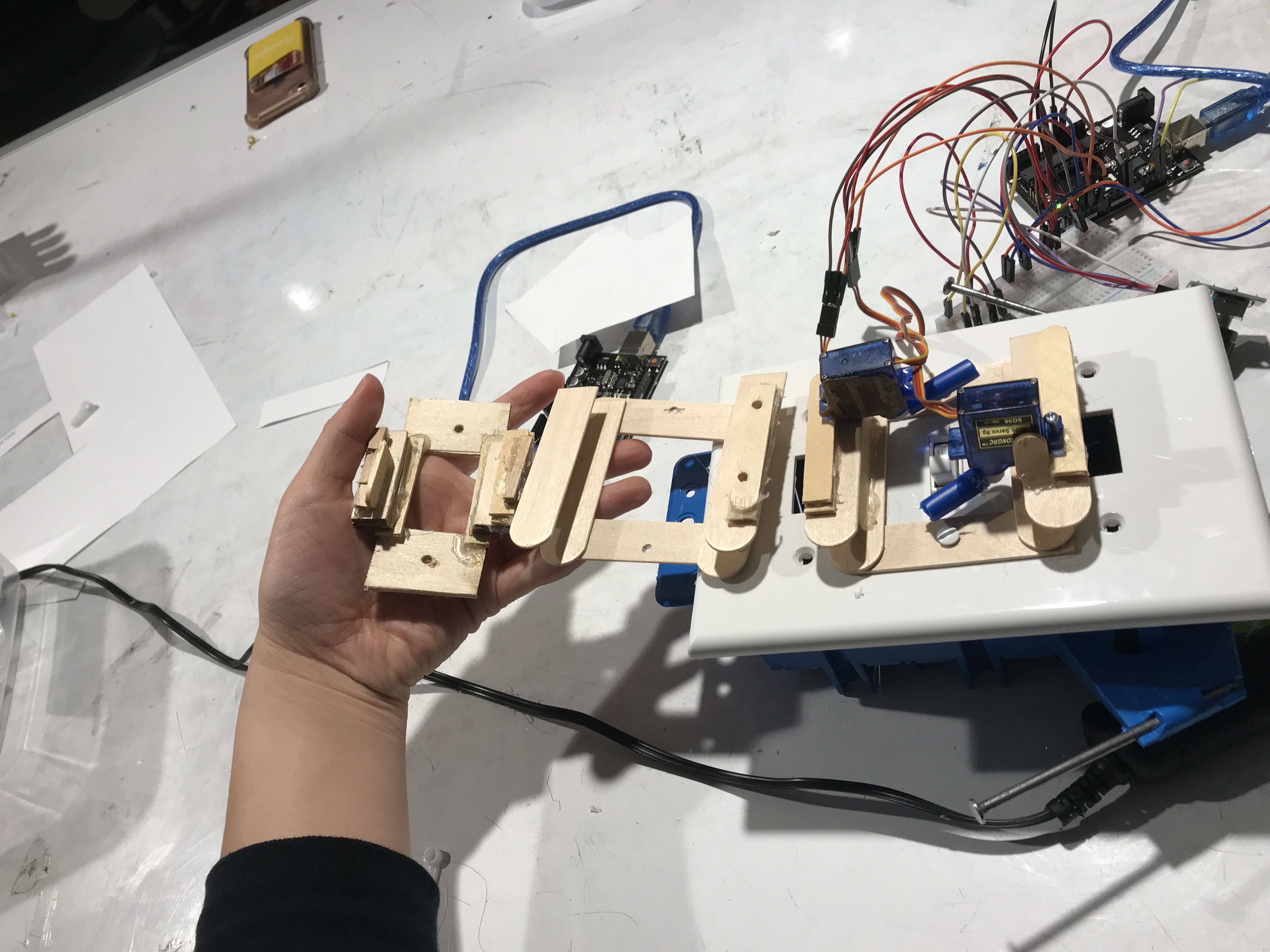 The progression of mount prototypes. The first just did not work at all. The second didn’t have the correct measurements. The final is a sturdier version of the second, with proper measurements.

Unfortunately we did not have a feasible project idea until the Monday before the prototype was due; other teams were able to have a device idea days earlier than this. Consequently, we were unable to order the linear actuators we originally wanted to use to flip the switch. Mounting a servo on the light switch provided an interesting obstacle. We still wanted to allow the user to operate the light switch normally, so the servos could not obstruct the other switches on the light switch panel. The resulting prototype was a bit clunky, but it worked.

The critique ultimately reinforced some preexisting ideas of how we felt about the prototype. After having an in depth meeting with Kathy, we learned about some of her main concerns. Kathy explained that she wanted the device to be as neutral and unnoticeable as possible. She expressed a strong aversion at both the maximalism and homeliness of the prototype. Understandably, we reassured her that this was not going to be the final look of the product at all, as this was only the initial iteration. However, we could definitely make changes to our preexisting UI according to her feedback.

We included the LCD display and rotary encoder to allow for easy, straightforward operation of the device, but after receiving feedback regarding the redundancy of having so many moving parts, we agreed to scrapping them and replacing them with a simple potentiometer for setting the timer.

Going forward, we will address the visual design of the prototype, which we neglected in this initial meeting. We intend for a more polished mount that will either be machined out of metal or 3D printed. To allow this to blend in with the rest of the switches, the mount will be the same color as the wall plate for the switches. Kathy also mentioned that her current light switch plate is old, so we are probably going to buy a new plate that can accommodate 4 light switches, since this is the setup of Kathy’s switches, and then just swap the panels after the device is complete. Having this panel will make prototyping much easier and allow us to see what the final, installed device will look like without having to travel to Kathy’s home.