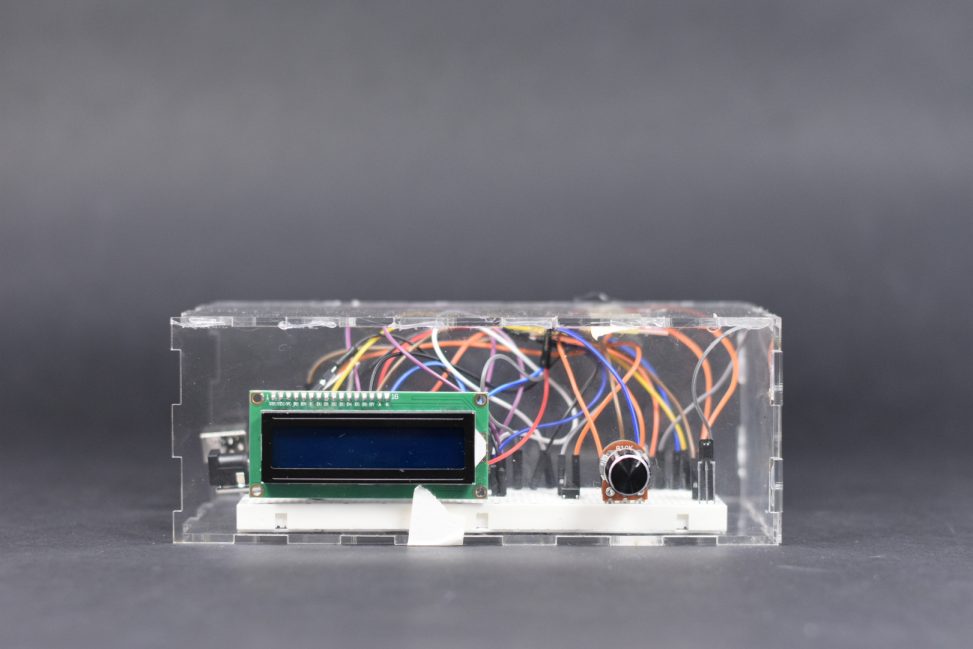 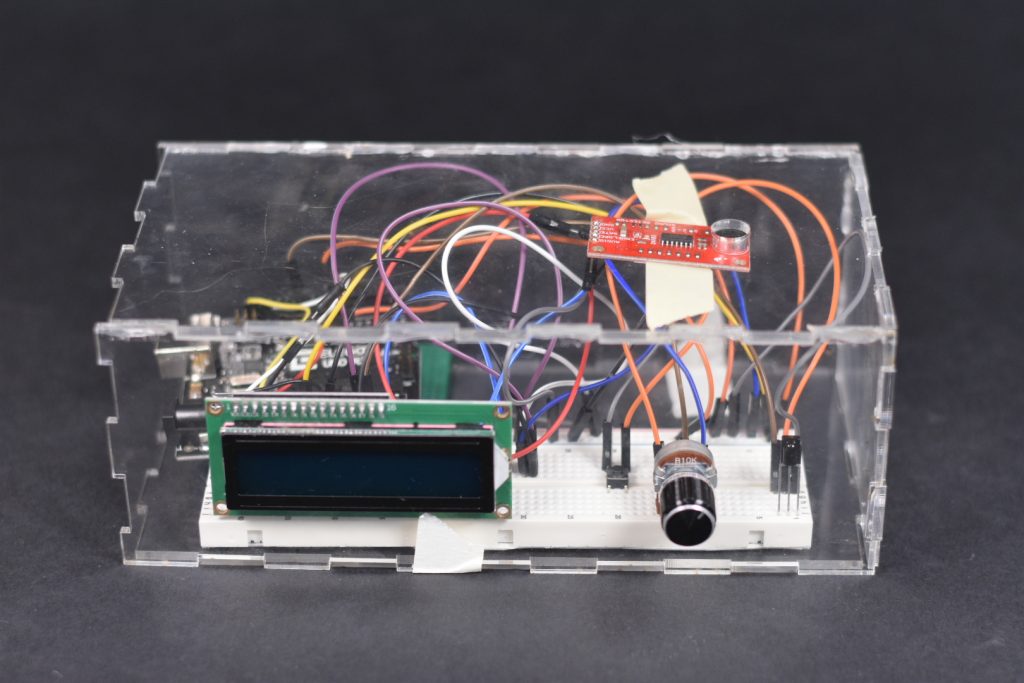 Top view of the prototype

After interviewing Lois ( https://courses.ideate.cmu.edu/60-223/s2019/work/documentation-meeting-with-lois/ ) we determined that we would focus on designing a TV volume regulator for Lois and Irv’s den.  A constant issue that Lois runs into is that when she is watching TV, as the commercials come on, the volume increases so much that Lois has to lower the volume using the remote. 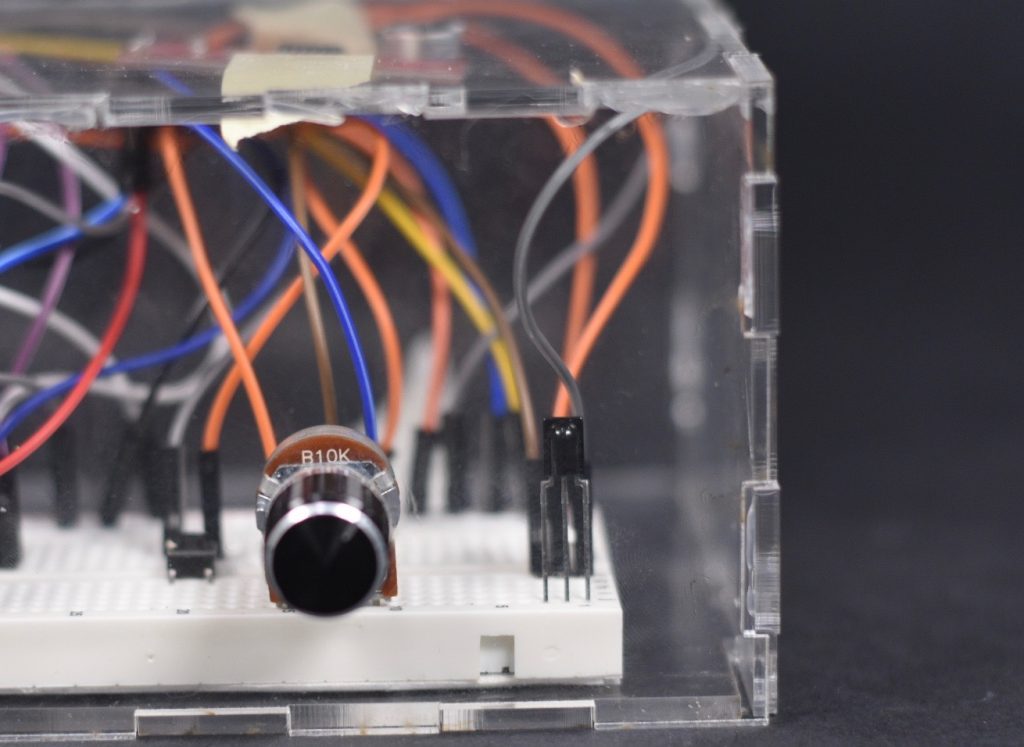 Using the potentiometer, on the left side of the image, Lois or Irv can set the volume limit/volume threshold . In this current prototype, the number of the potentiometer is displayed on the LCD screen. This threshold indicates at what loudness the TV volume should be lowered. If the volume exceeds that limit, the sound module detects this and sends a message on the serial monitor. Otherwise, nothing is sent. 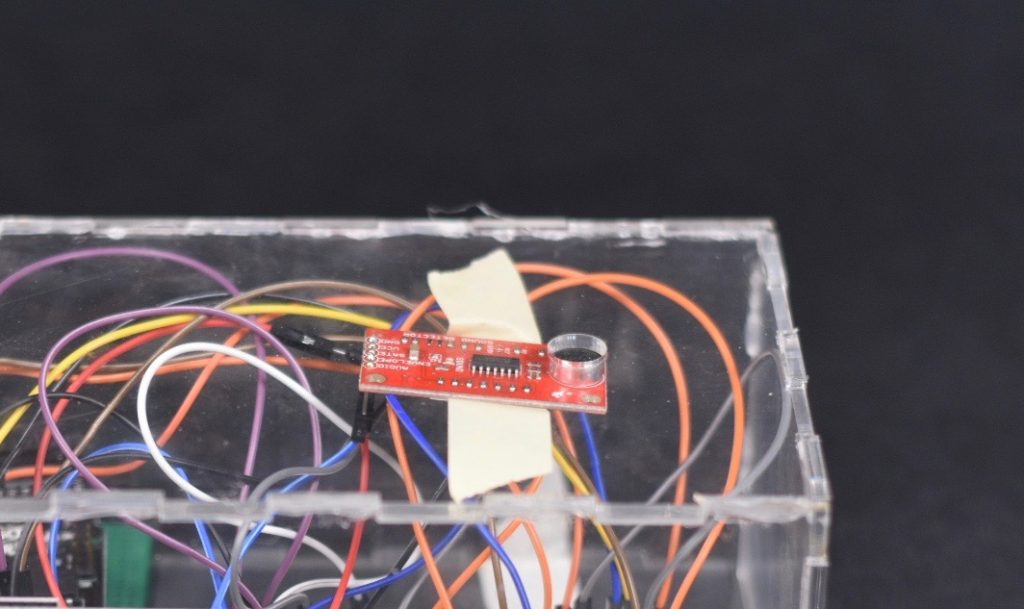 Serial montior output when volume is too high

The prototype can also recognize infrared codes sent by a TV remote.

After we determined what our project would do, we began to gather our materials and experiment with the IR transmitter and receiver.  After getting the IR receiver to display the IR code of different remotes, as well as setting the sound detector up to detect the volume of the television, we were ready to visit Lois again to understand the specifications of her situation. 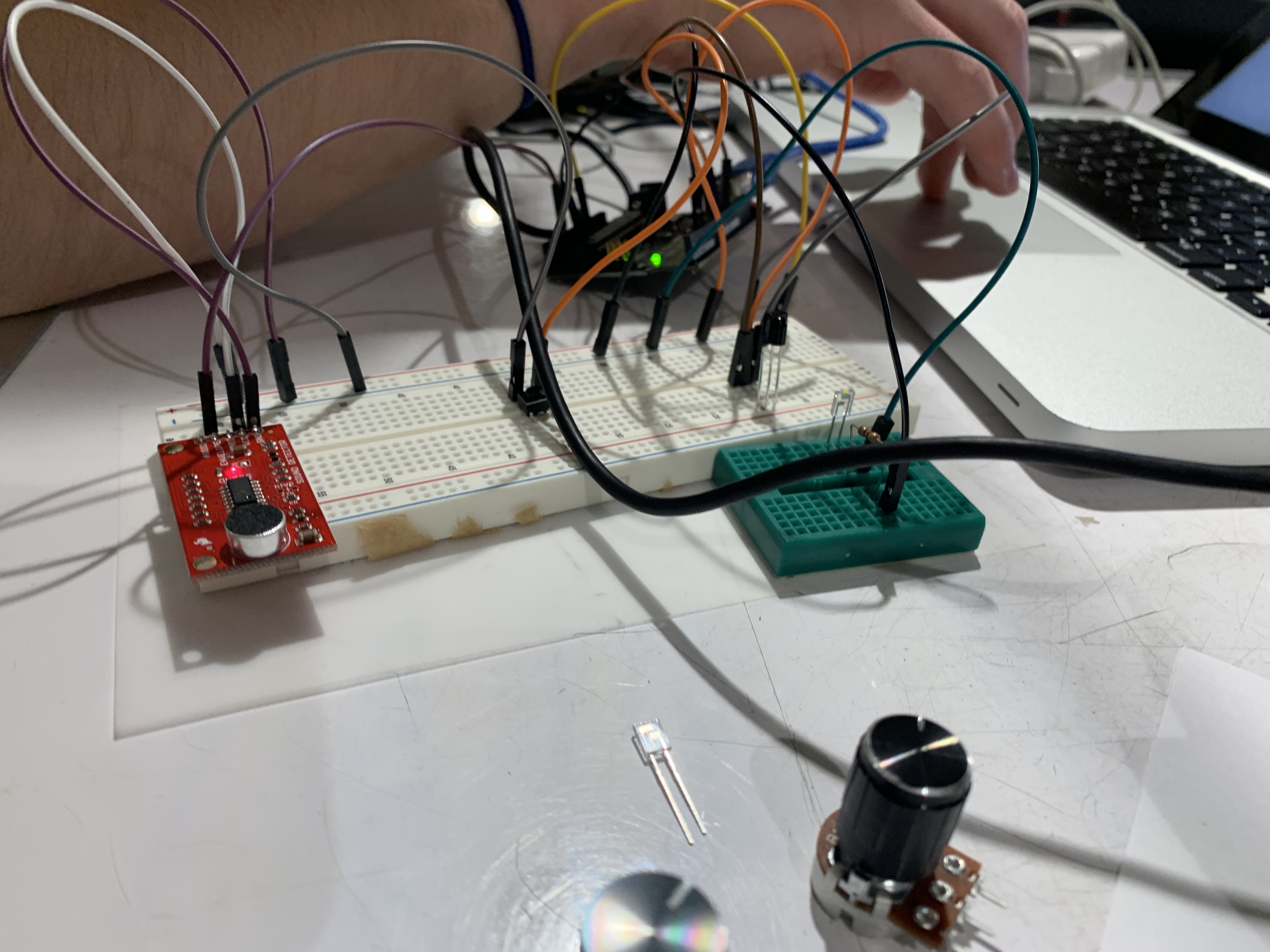 Testing IR transmitter + receiver, button is used to send code to the IR receiver. Sound detector is used to detect volume from TV

In Lois den, we had a number of considerations to make in our second visit:

Some places we considered for the placement of the device was the small space next to the television (pictured in the left). However we decided that if Lois or Irv wanted to change the threshold of the volume, the space next to the TV’s speaker would be inconvenient to access. We then considered the coffee table (pictured at the bottom) which served as a good compromise to both the proximity to the TV as well as the accessibility to Lois and Irv. However, Lois and Irv preferred not to have the device on the coffee table, so we dismissed that idea. In the end we decided to move the placement of the device to the back table (pictured in the right), due to the ease of access. One issue we do expect is the sound detection as well as the reliability IR transmitter, however once that issue arises, we will work that out with Lois.

1. Placement of Device: Panorama shot of Irv and Lois’ den to understand placement of the TV volume regulator

Since we had already set up the code to receive the IR code from various remotes, we also had to record the IR code of Lois’ remote buttons. We recorded the power, volume up, and volume down buttons. 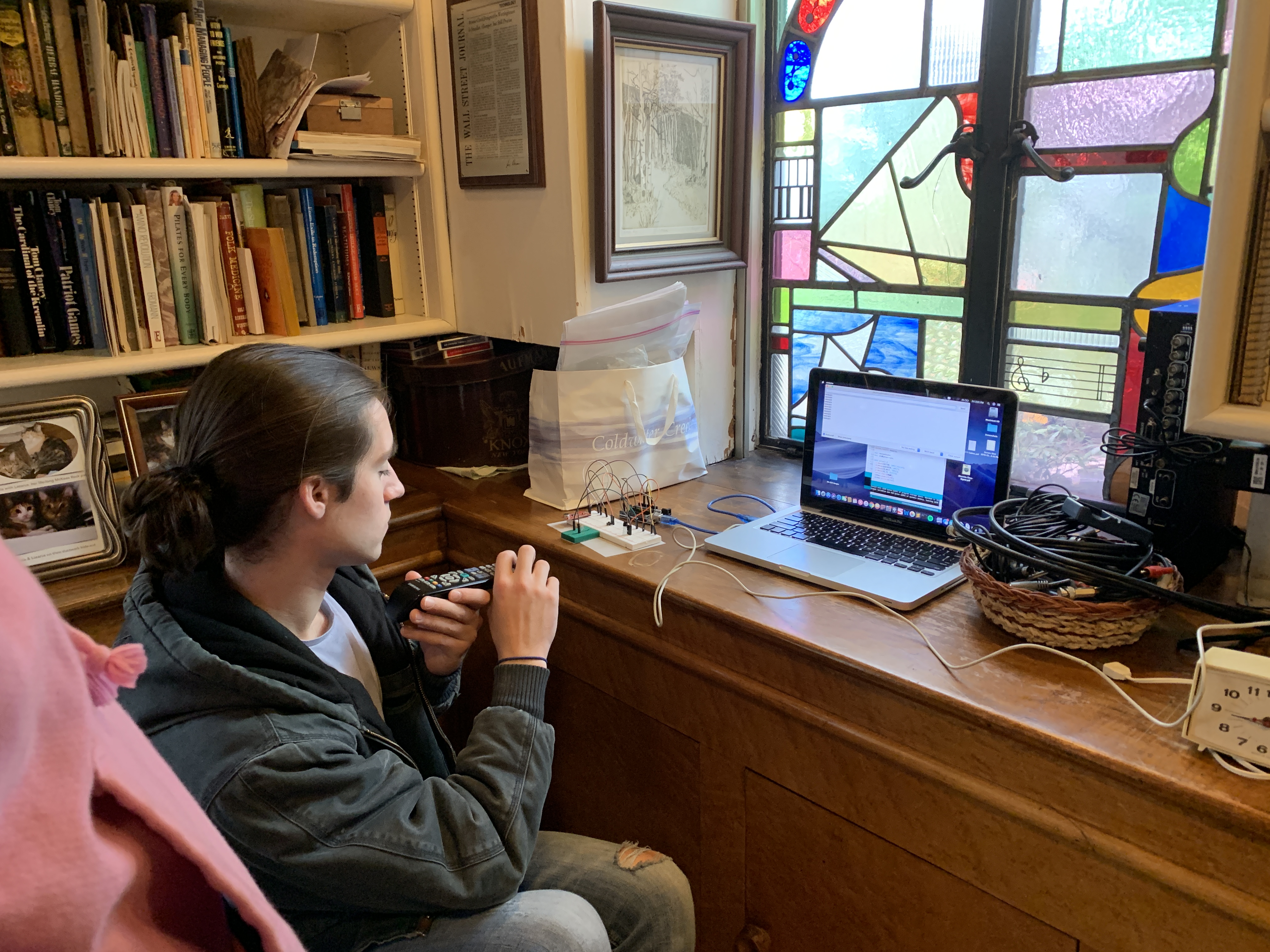 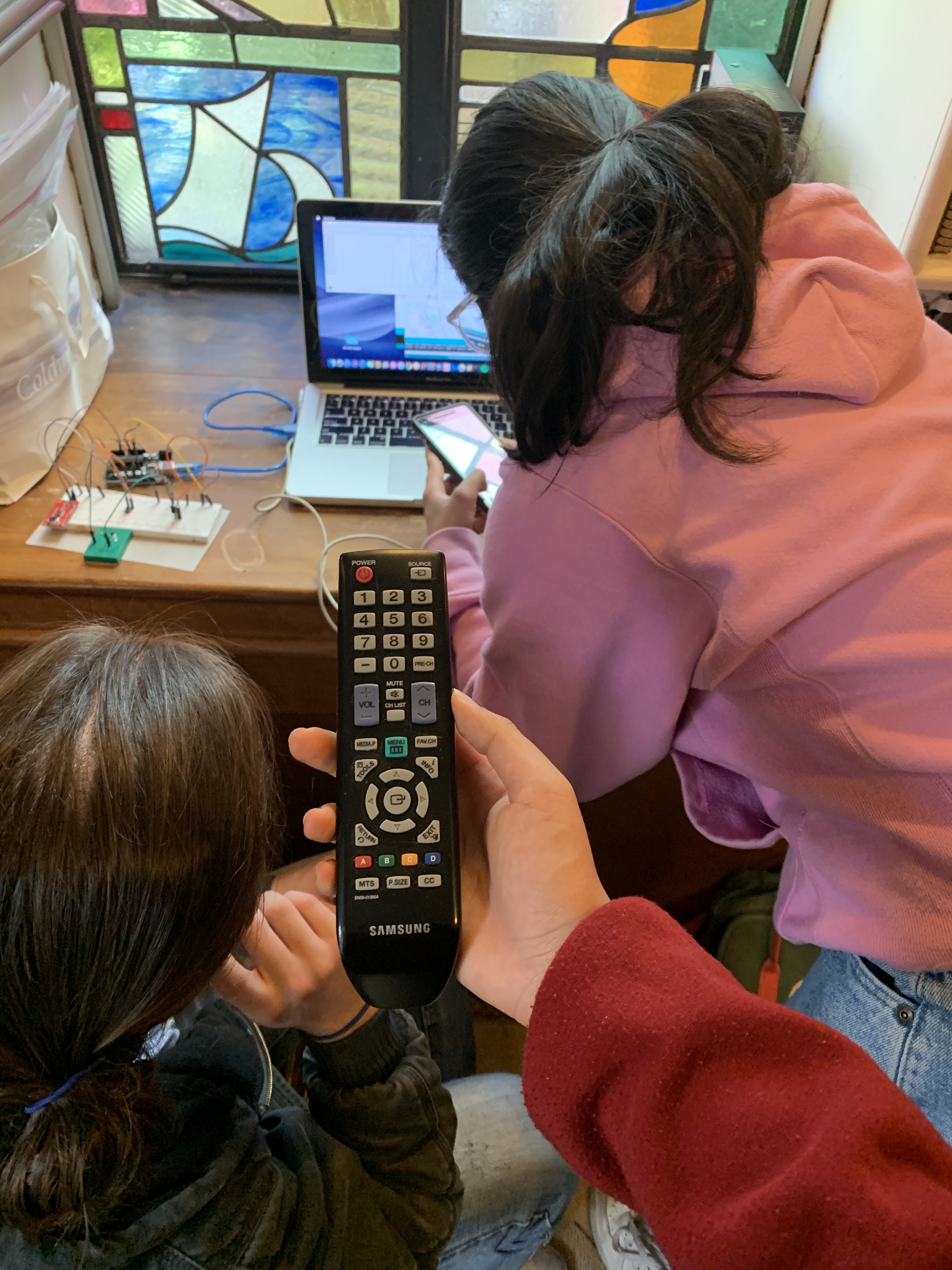 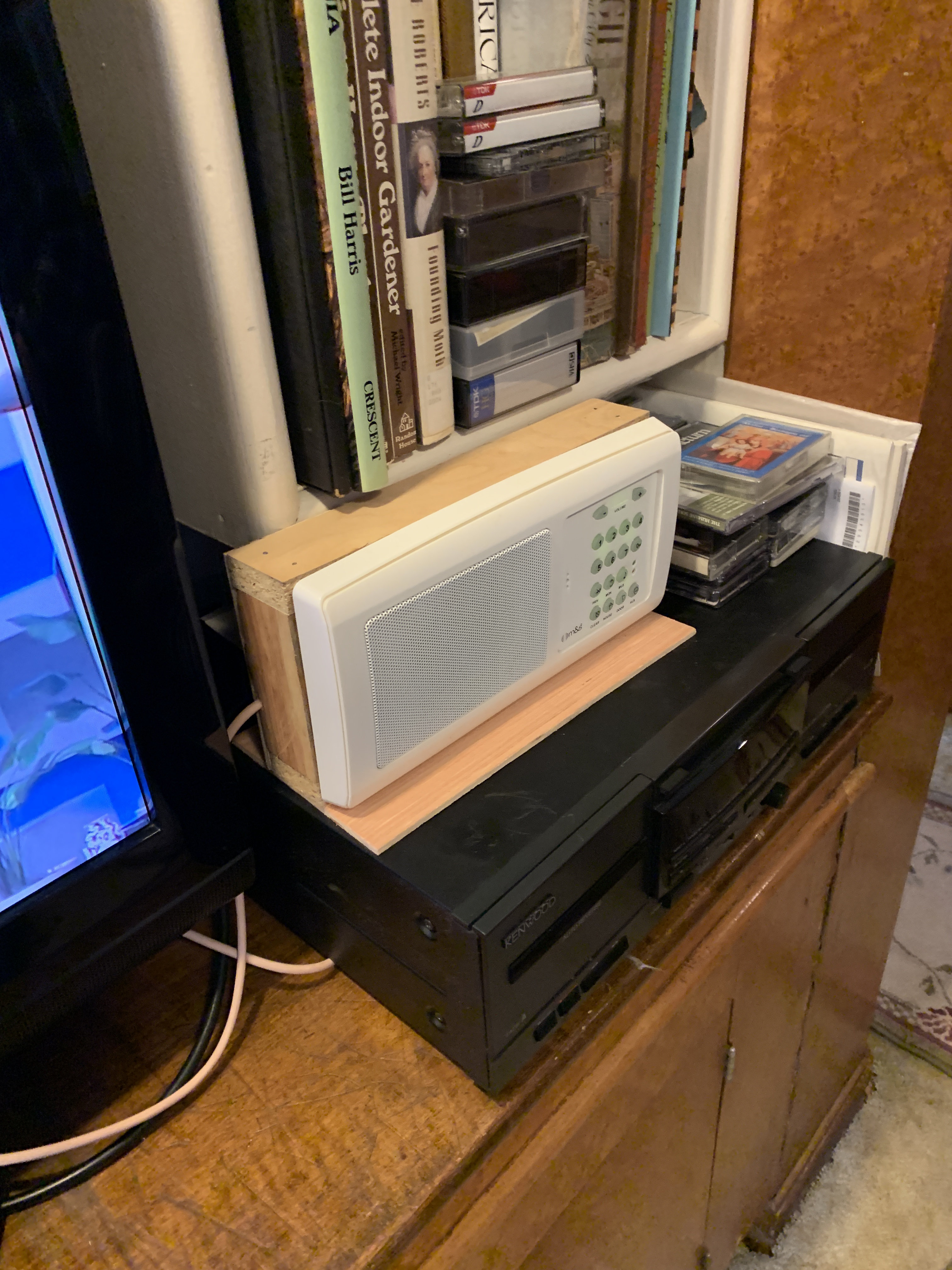 3. Environment in Context of Device: Looking at the style and form of other devices in Lois den. In this photo is the radio that Lois was listening to when we entered the space 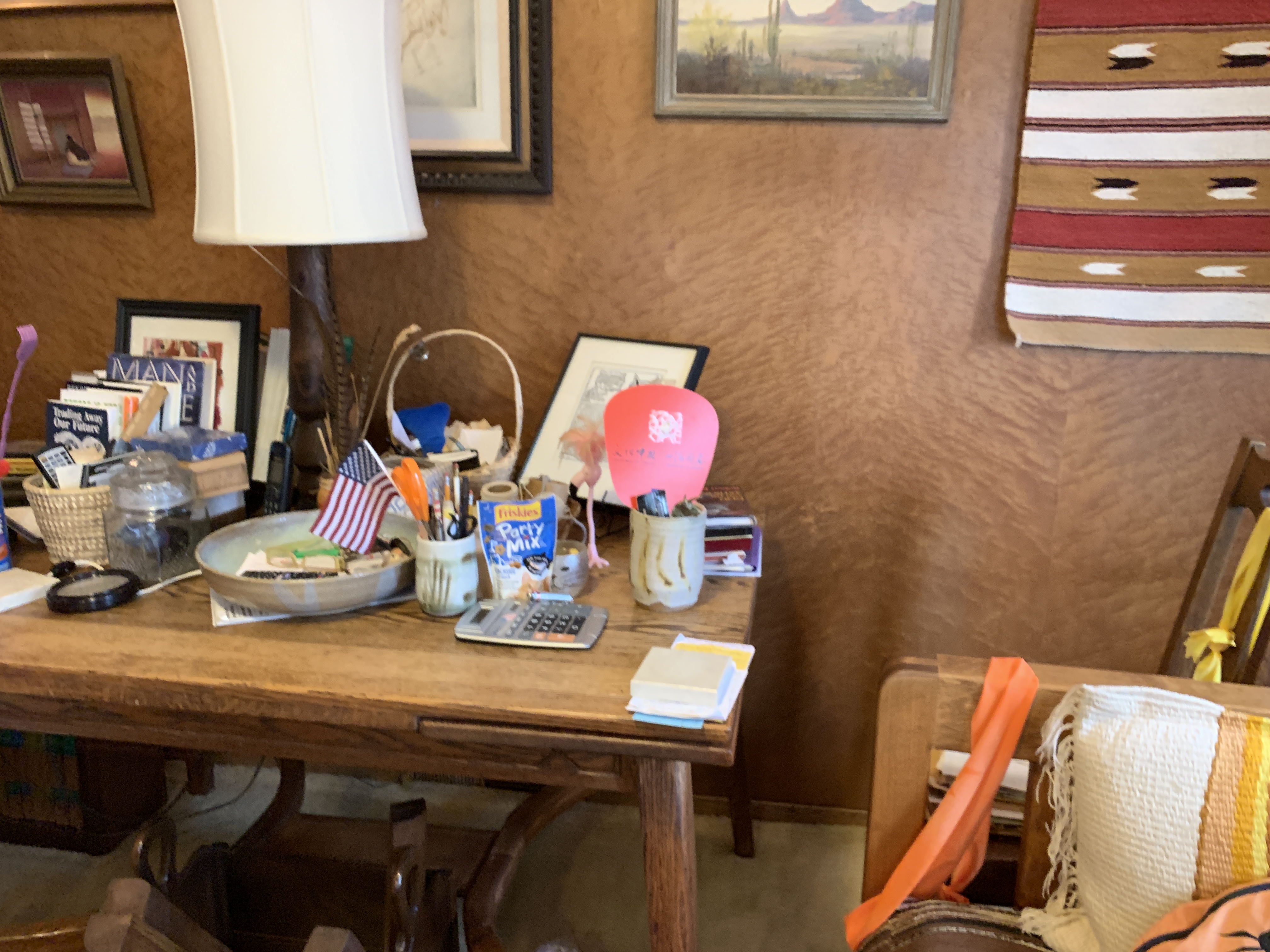 3. Environment in Context of Device: Items on back table

After meeting with Lois we worked on the LCD screen and the potentiometer to set the threshold. We attempted to work with the projector and use the IR transmitter to change the volume displayed on the projector, however because we don’t have the correct part, we were unable to work on the device changing the volume reading. 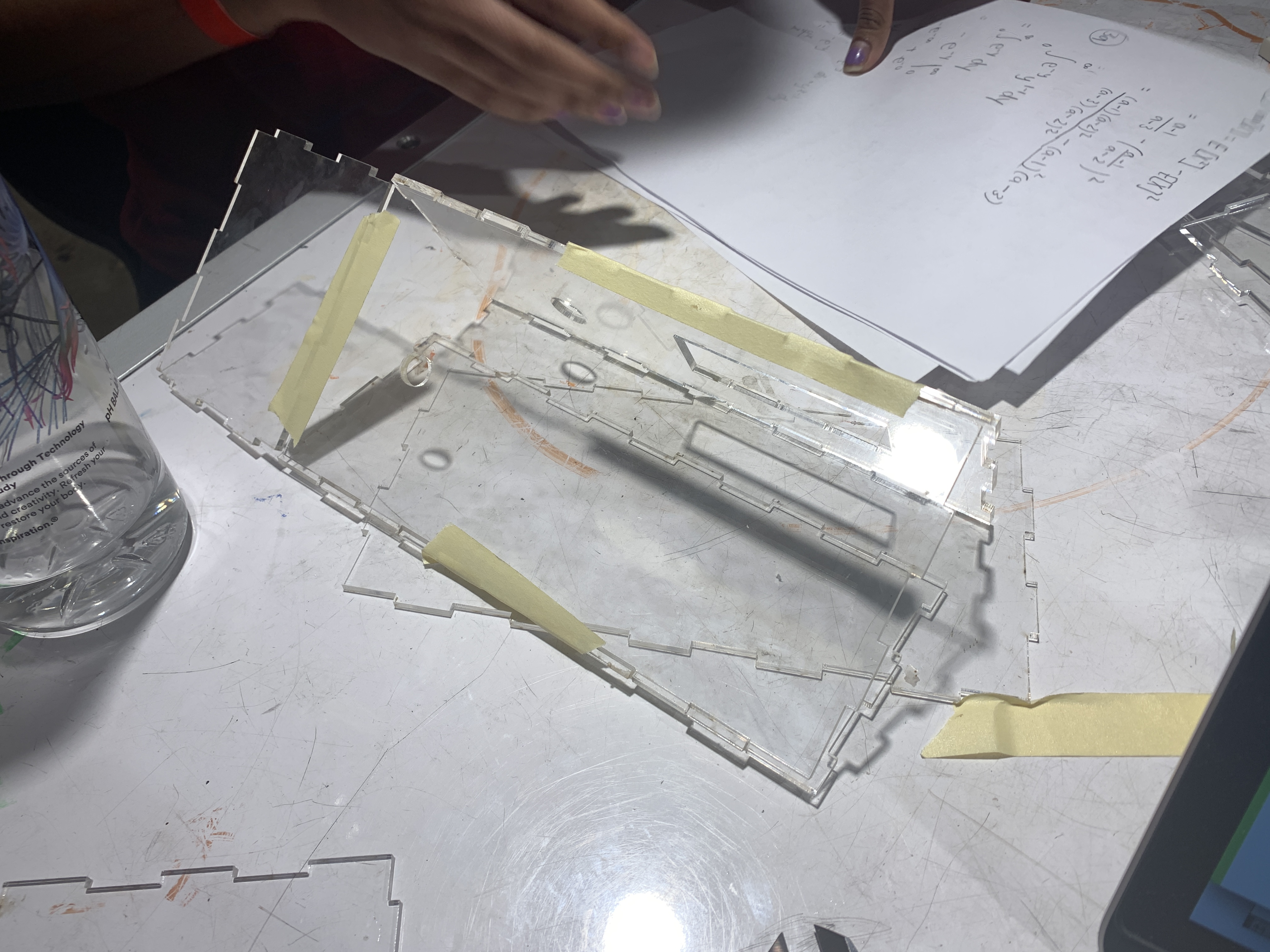 Constructing Acrylic Box, designed for the LCD screen, sound detector, and the potentiometer. (did not design for the Arduino USB cord) 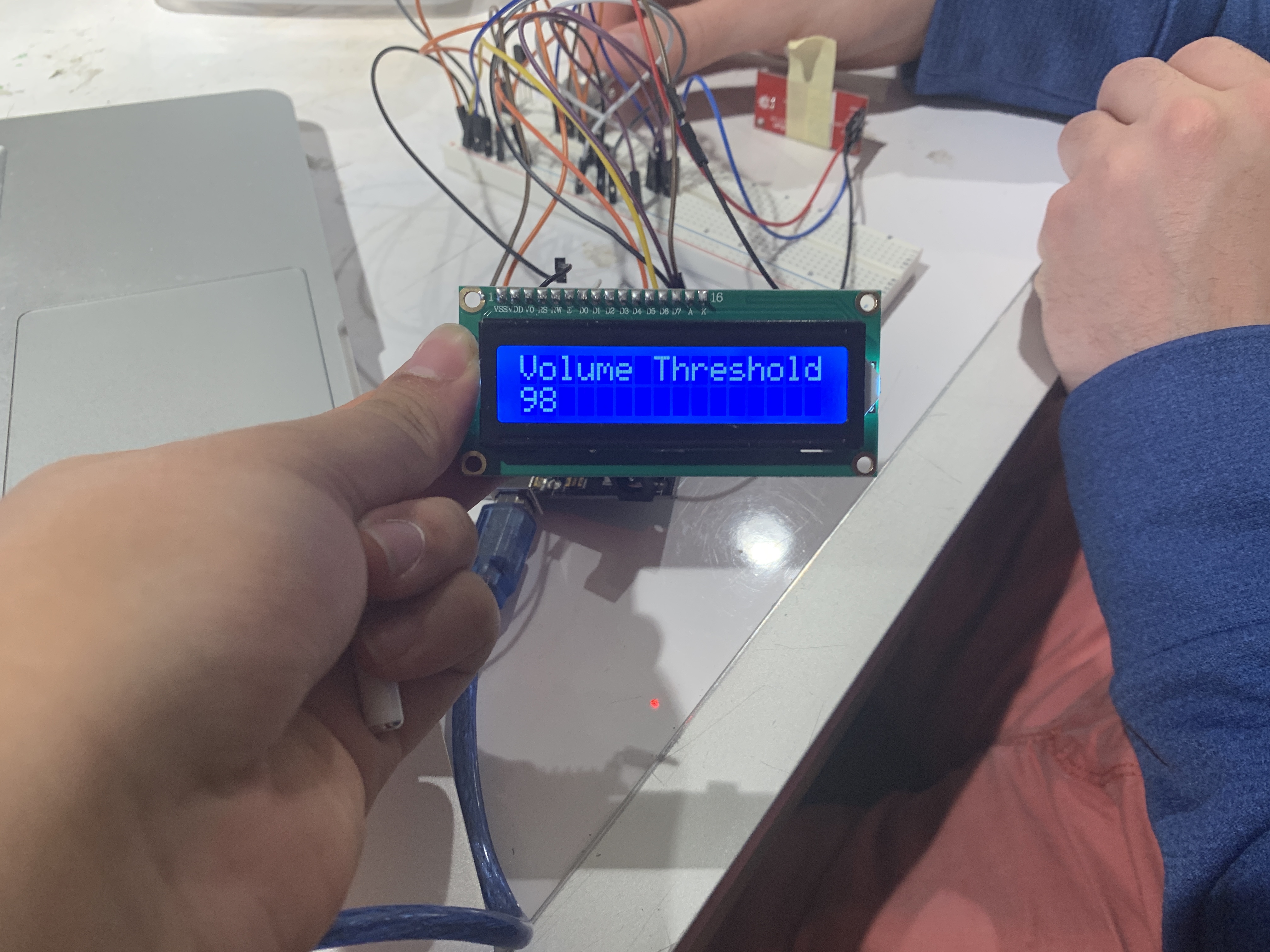 Testing LCD screen, which would display the value of the potentiometer (1-100) 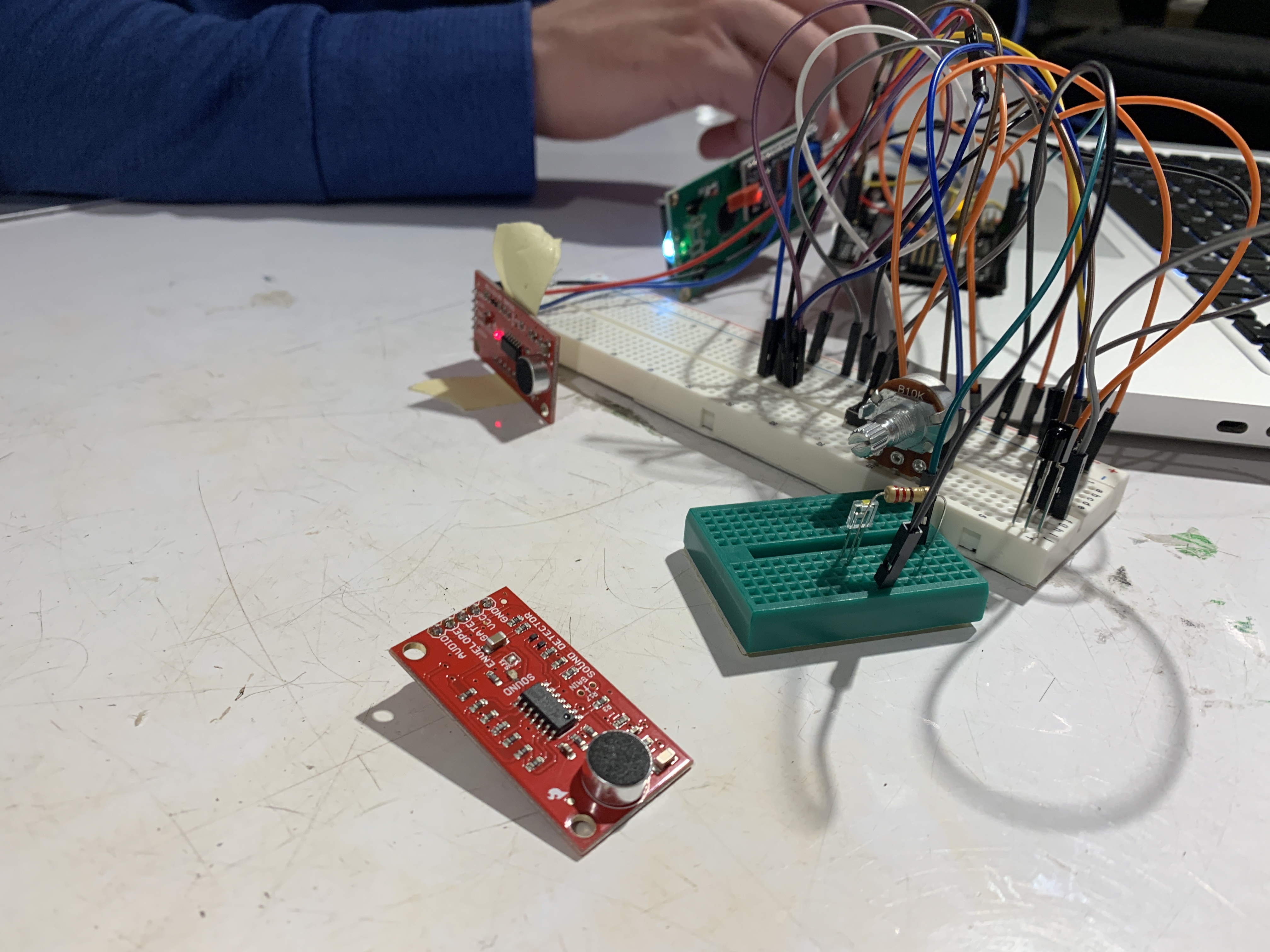 Sound detector issues: The sound detector we were using wasn’t sensitive/reliable enough to detect the volume of the television

Challenges: Some major issues we ran into while prototyping was the IR transmission not being able to transmit a code for the TV to change the volume. We determined the issue was not having the right part. We experimented with using the infrared proximity sensor and the reflective optical sensor, however ultimately determined that we need to get another part: the IR LED 940 Nanometer. Another issue we ran into was the sensitivity of the sound detector. Because our primary reason for this device is the volume, the sound detector needs to be able to detect 10-20 decibel changes, and the sound detector we were using was not sensitive enough for what we were trying to do.

During the critique on April 8, some questions we got from the general class were how the sound sensor would detect the change from commercial to the regular TV program and whether that change would be something that is detected by the timer or the sound sensor. Overall, because our code hadn’t loaded on the computer by the time of our presentation we didn’t get much feedback from the class but afterwards we were able to talk to Lois about whether she preferred to have the commercial breaks be timed or would there be a button that is pushed in order to raise the volume back up.

During the meeting with Lois, we primarily discussed the way for the volume regulator to either turn on or turn off the device. She said that it would be best if there was a button on the remote that she could push, so that when directed towards the device, it would turn the volume back up. We also discussed some visual representation of whether the device is working. She said she would prefer if the device is lowering the volume of the TV the NeoPixel will turn green, and if the device is increasing the volume, the NeoPixel will turn red. We then showed her some sketches we drew for the final form to see whether she would like this device in her den. She suggested rubber feet so that when Irv and Lois interact with the device, it won’t slide on the table. We asked her if she would like to have any other functions and she said she would prefer a mute button. We said that that can be possible with a rotary encoder. Overall, she was very happy with where we are going with the project and is excited to see how it would change her TV watching experience. 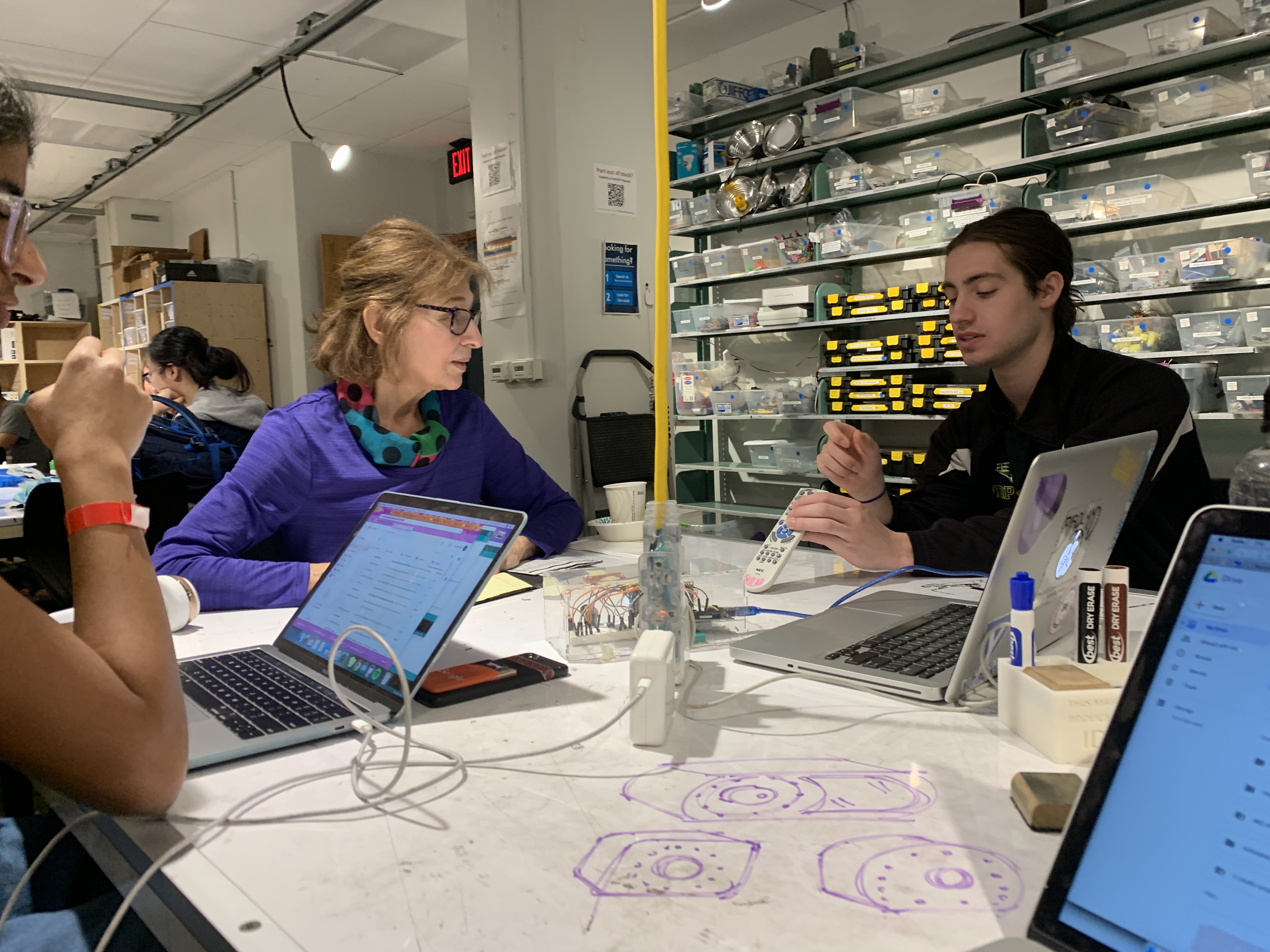 In class meeting with Lois 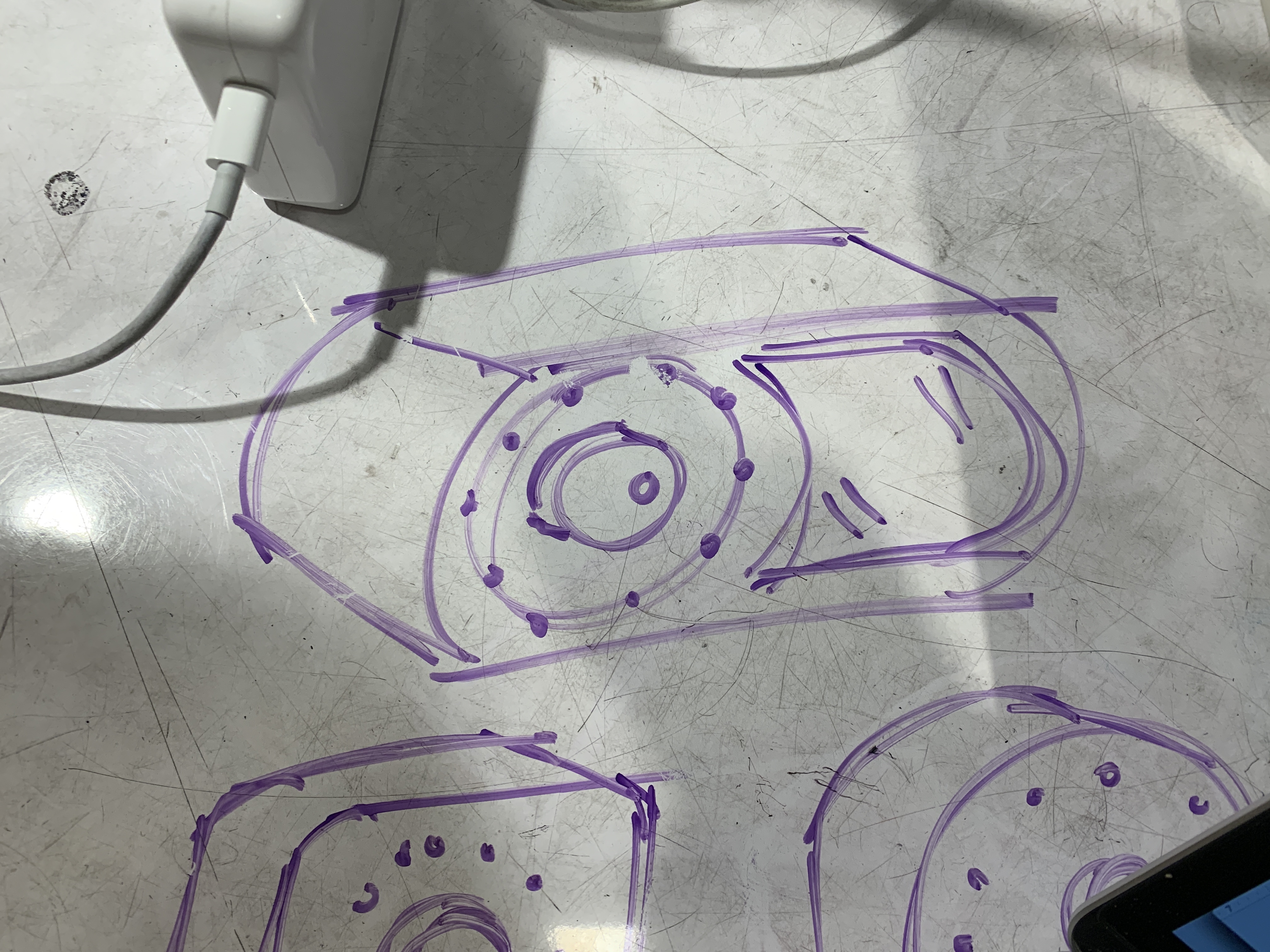