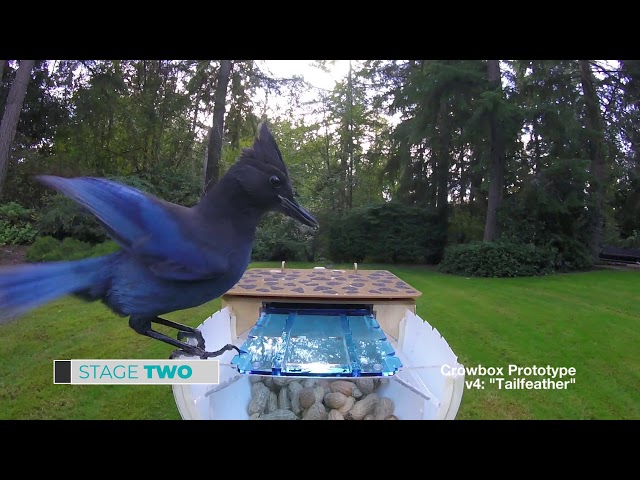 I was introduced to the Crowbox last summer and immediately knew that one of my goals for this academic year would be to obtain the skills and resources to build one for Carnegie Mellon’s campus. This was my first exposure to Arduinos and one of the reasons I registered for this class.

The basic premise of the Crowbox, created by Joshua Klein, is that of a vending machine for crows, which, through the use of gradually progressing steps where the box functions differently, trains crows to find coins and deposit them for treats. The first step does not involve any electronic functionality- the treat compartment stays open as birds find the Crowbox and get used to its presence in a certain area. In the second step, pressure sensors below the lid of the treat box trigger the Arduino to control motors that open the treat box. In the third and forth step, the box opens when a coin is deposited through the slot; in the third step, the box itself dispenses coins, so that the crows encountering it are hopefully able to discover the connection between dropping coins in the slot and receiving treats, and are motivated to begin bringing their own coins.

The physical design of the Crowbox involves a box that holds the Arduino and other electronics, with an opening through which coins can be released, and an attached treat tray with a sliding transparent lid.

Unlike many featured Arduino projects, building the Crowbox is not the goal of the design in itself. The goal of the Crowbox, beyond training local crows, is to run a global experiment about whether different populations of crows respond to interaction with people and technology differently, and to prove a point about other potential uses of human-crow interactions. I find this to be a fascinating use of technology, particularly of Arduinos and the general field of small, user friendly computer systems that now allow virtually anyone to build electronics that can interact with the world in meaningful ways.