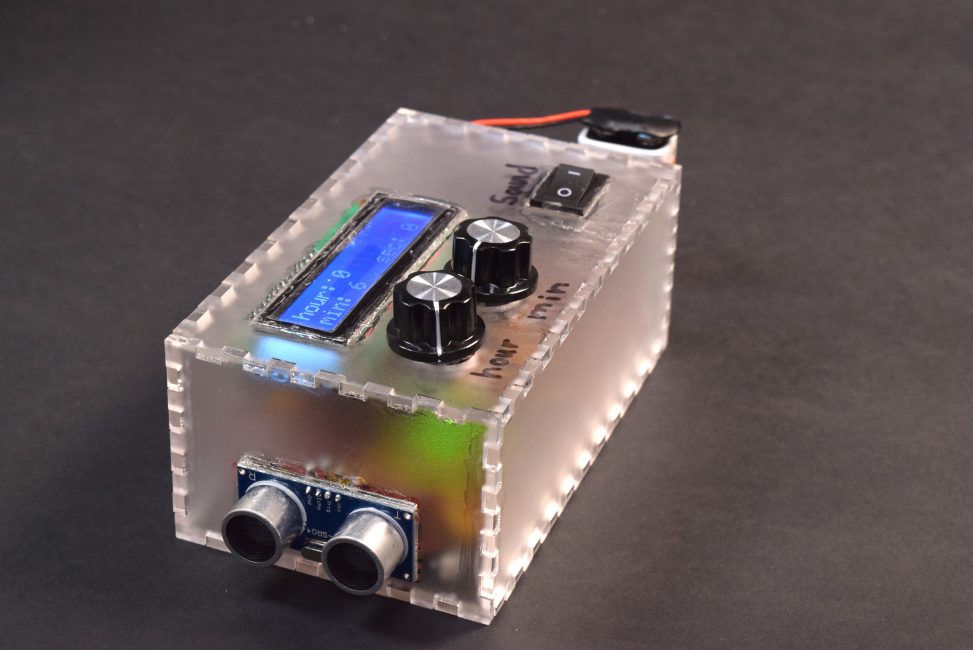 A physical reminder with customizable timing options ranging from 28 seconds to 24 hours. 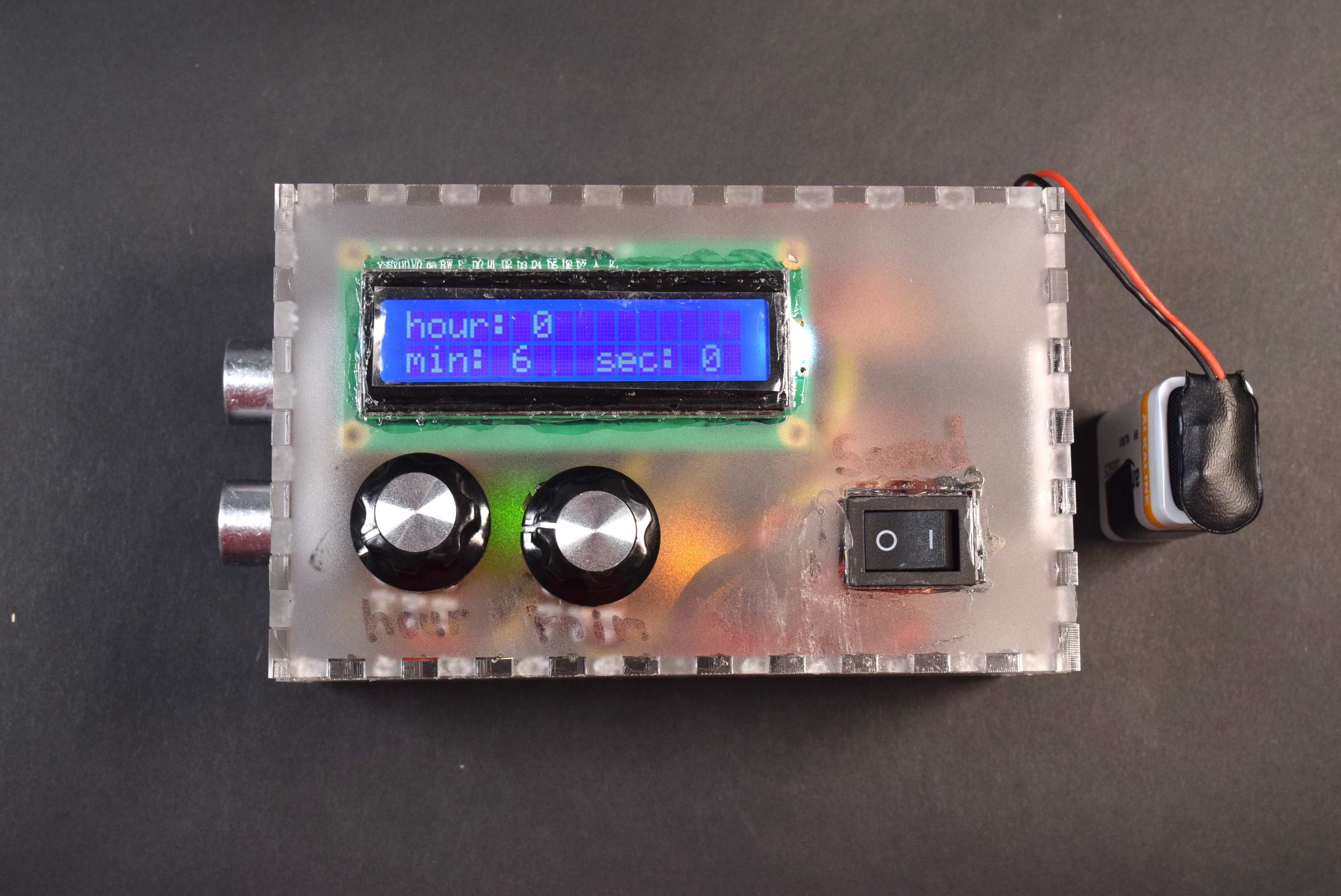 top of the reminder which displays the current timer setting 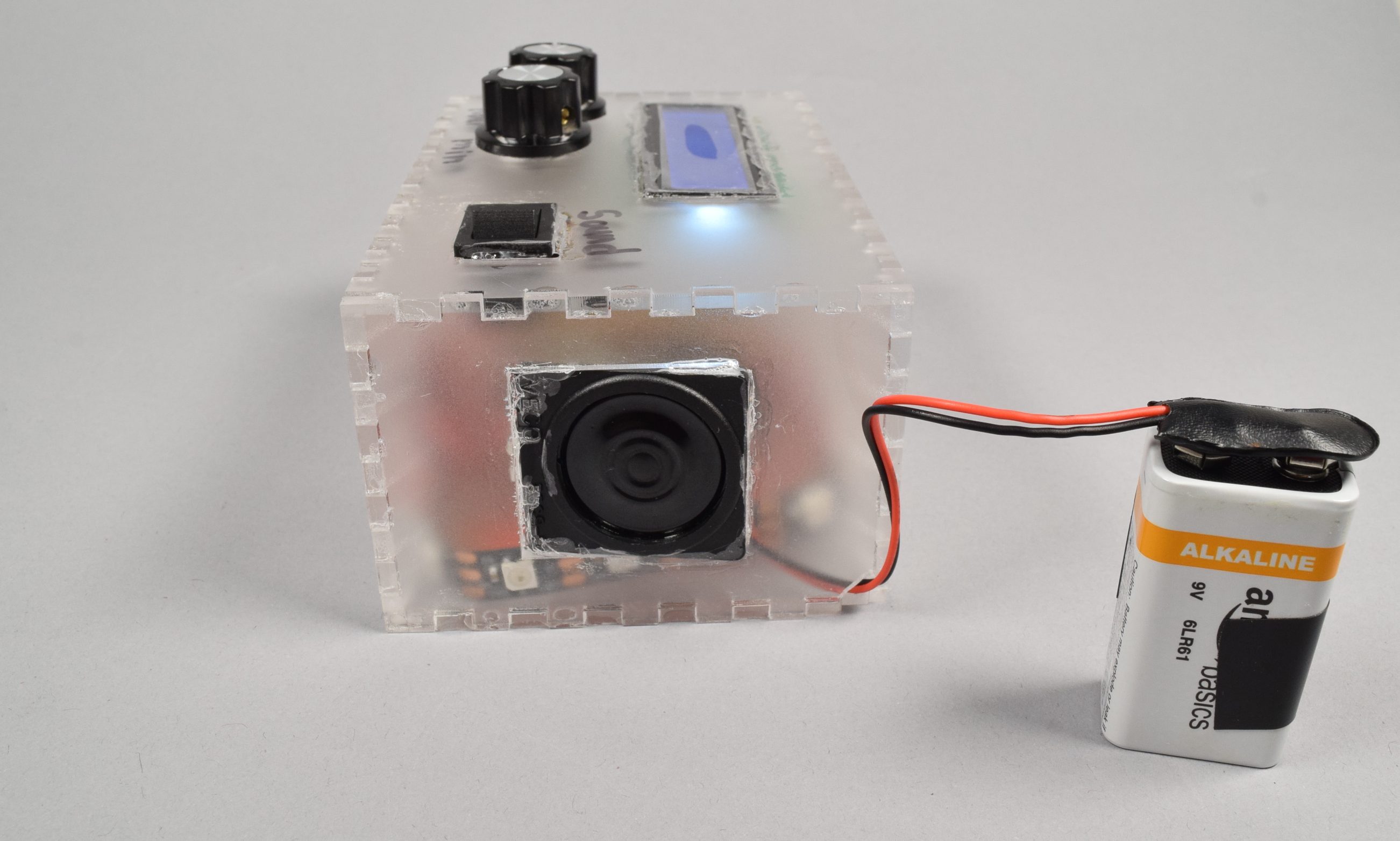 The switch on top activates a sound alarm if it is turned on. The reminder uses a 9V battery to power it. 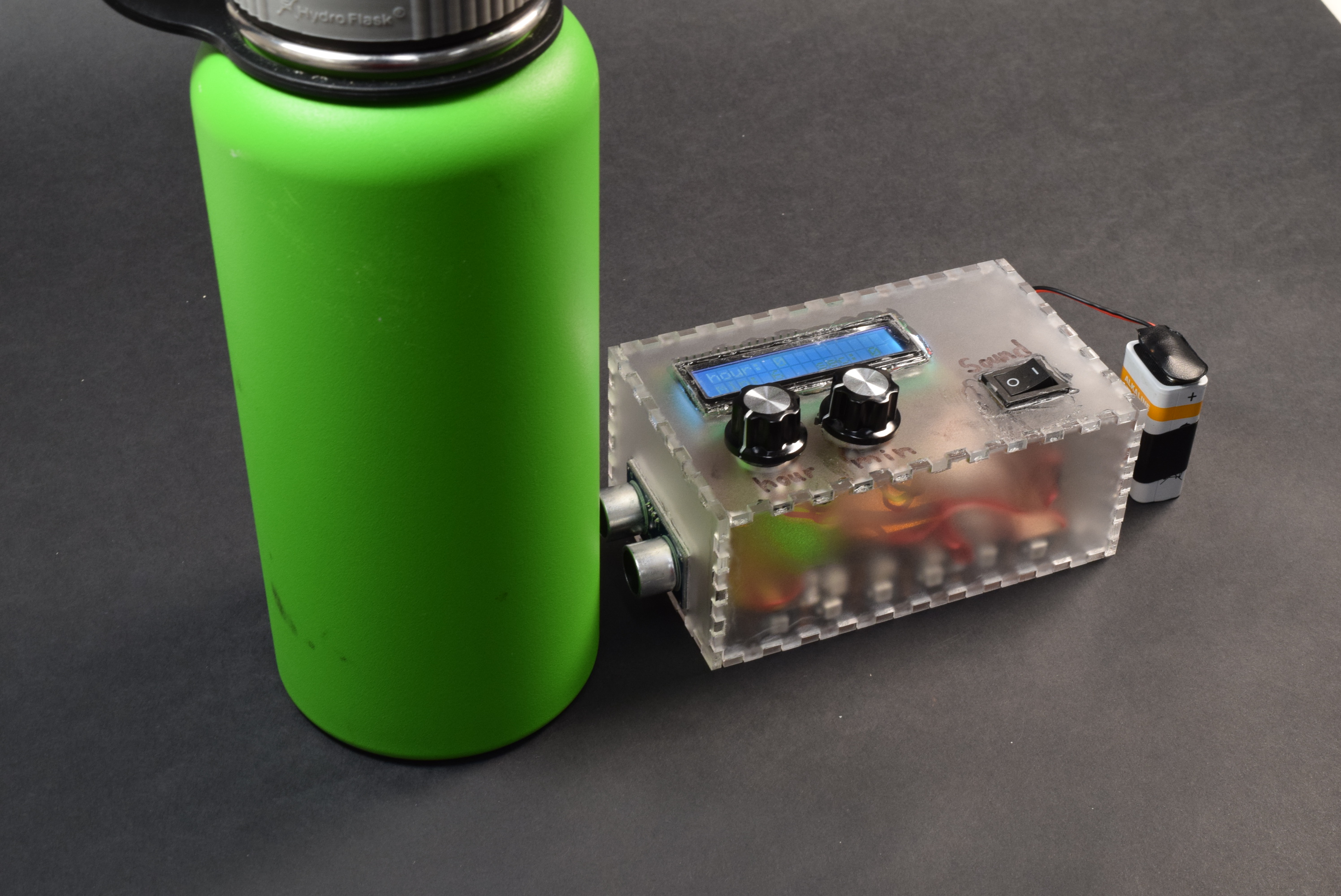 Place next to object you want to be reminded about, and set the timer to the desired reminder frequency. 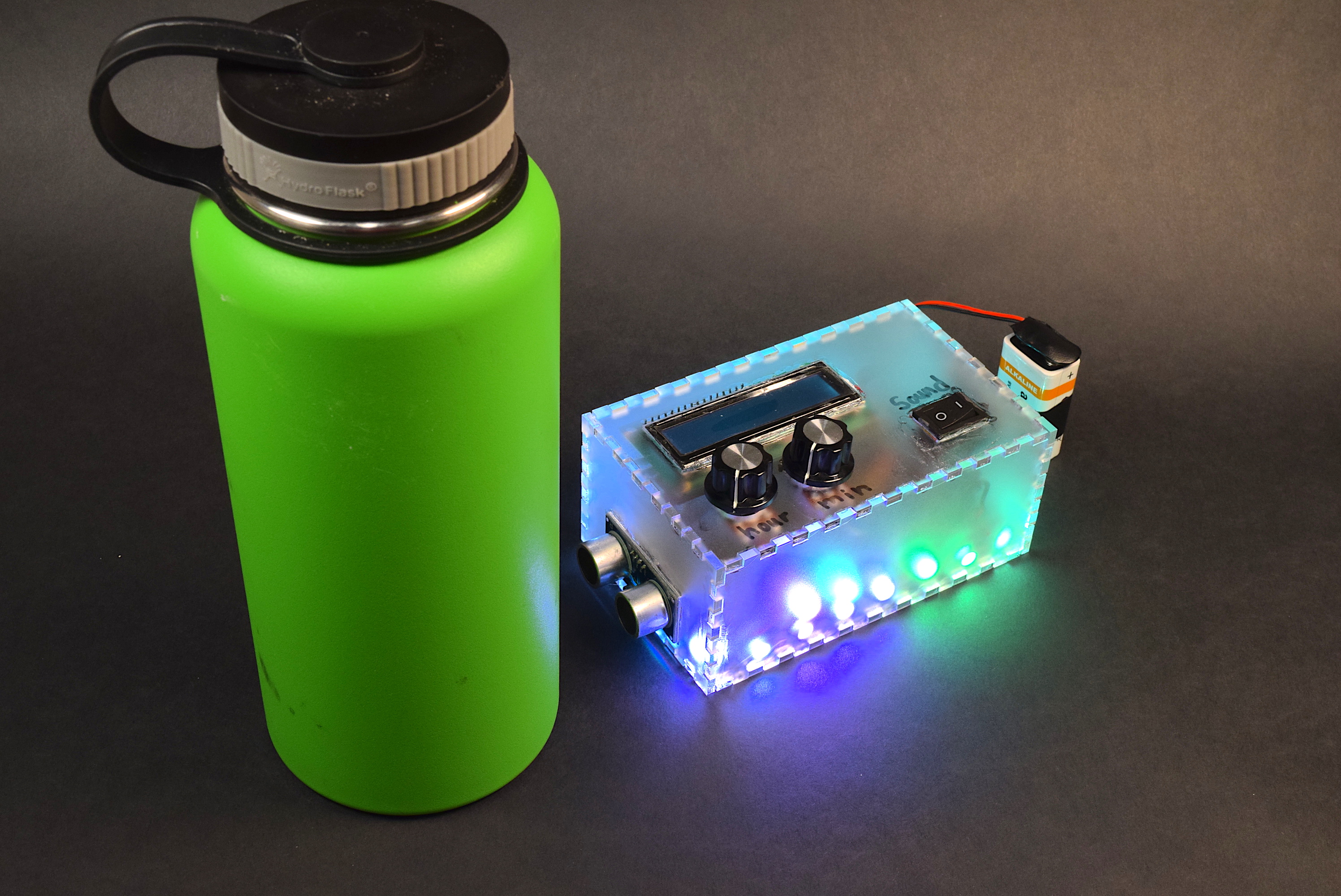 Once the timer runs out, the alarm will sound (quiet mode uses LEDs as shown in picture but you can have it use sound as well – plays a little song instead of lighting up). After removing and returning the water bottle from in front of the sensors, the timer resets. 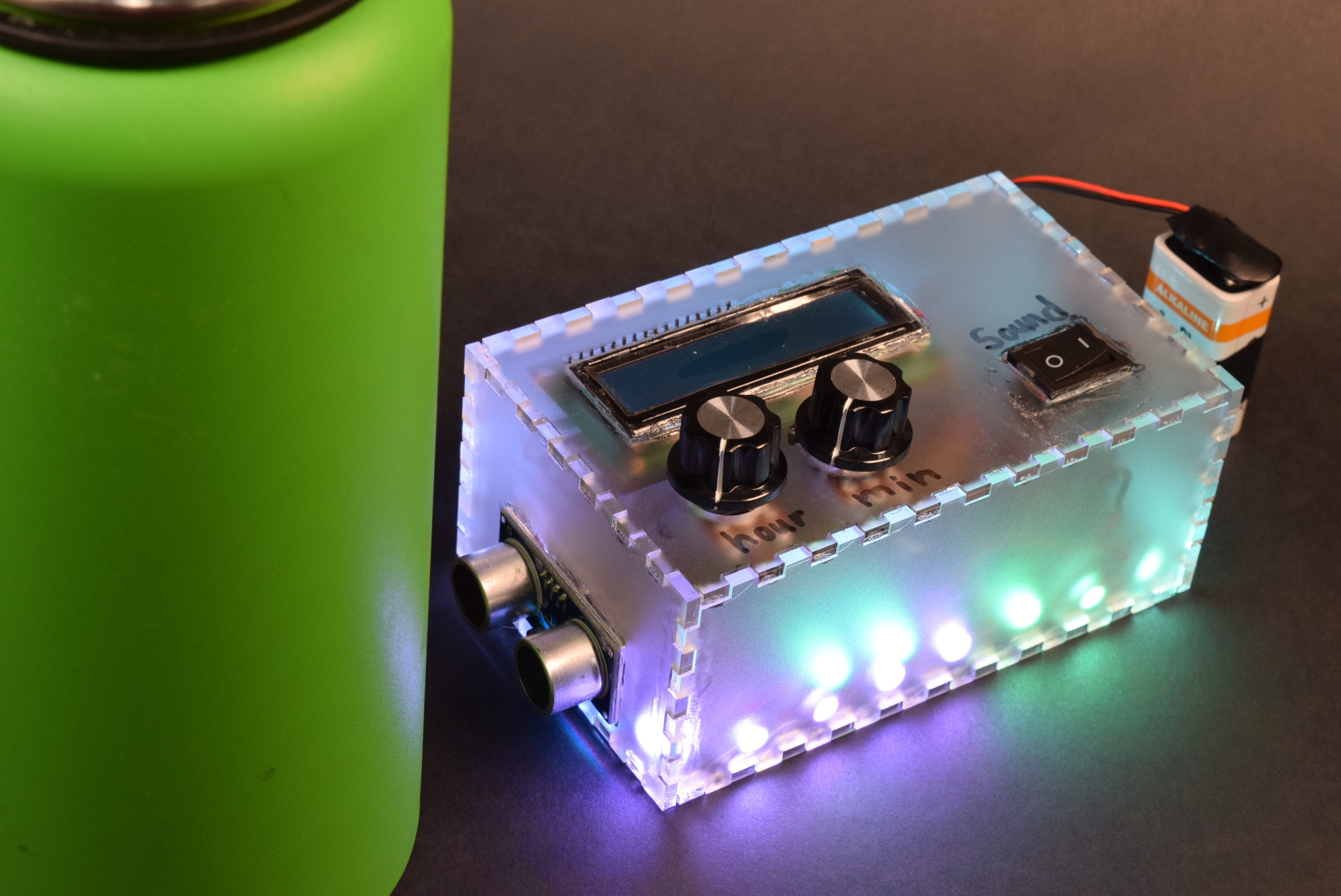 If the water bottle is removed before the timer runs out and the alarm goes off, the timer is reset. 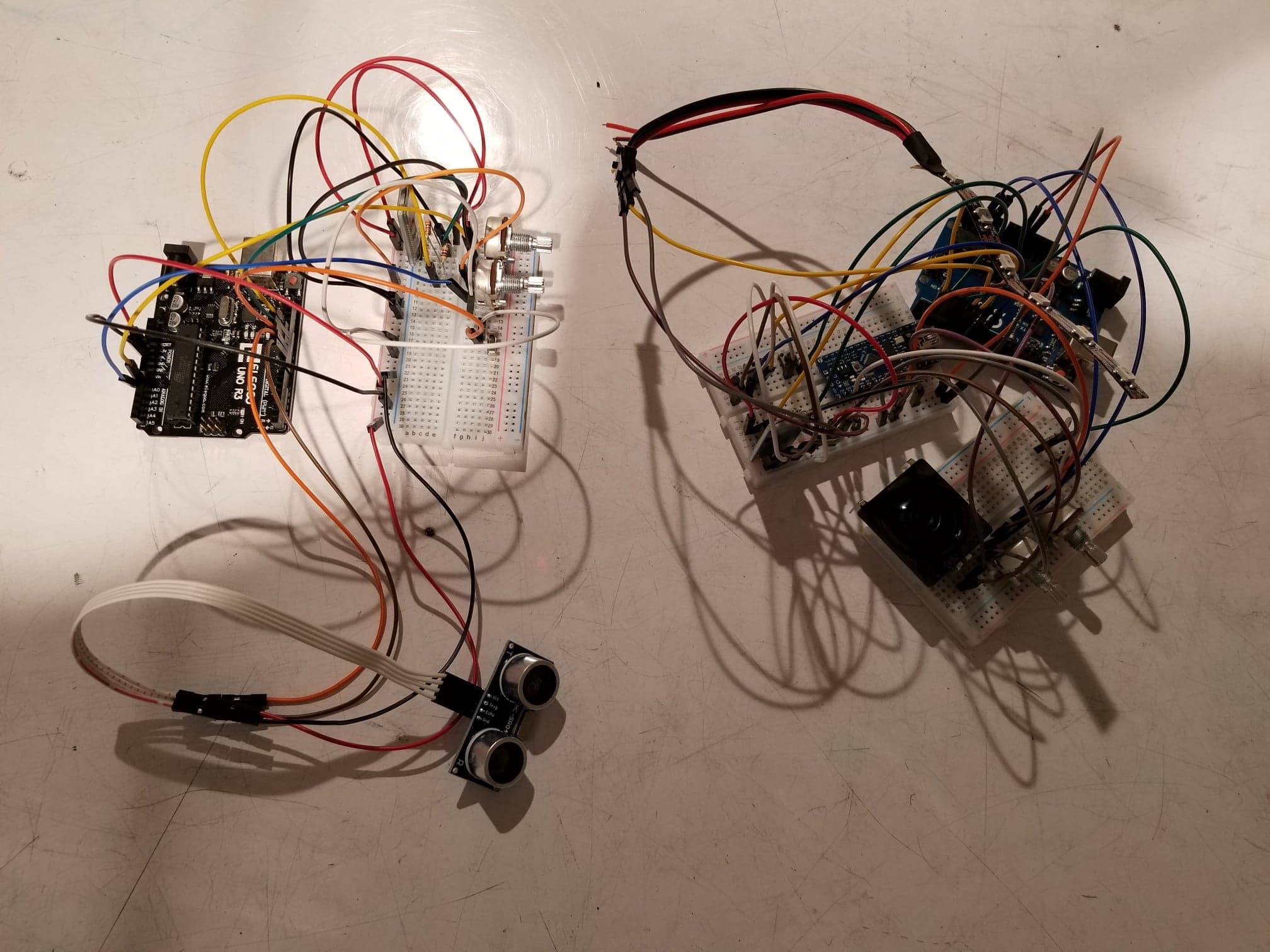 I began by attempting to use HC-06 Bluetooth modules to be able to communicate between a sensor and the actual “reminder” which would sound the alarm. That way the sensor could be a few feet from you but the alarm would go off right next to you. Tried switching to the nRF24L01 but the devices wouldn’t connect with each other 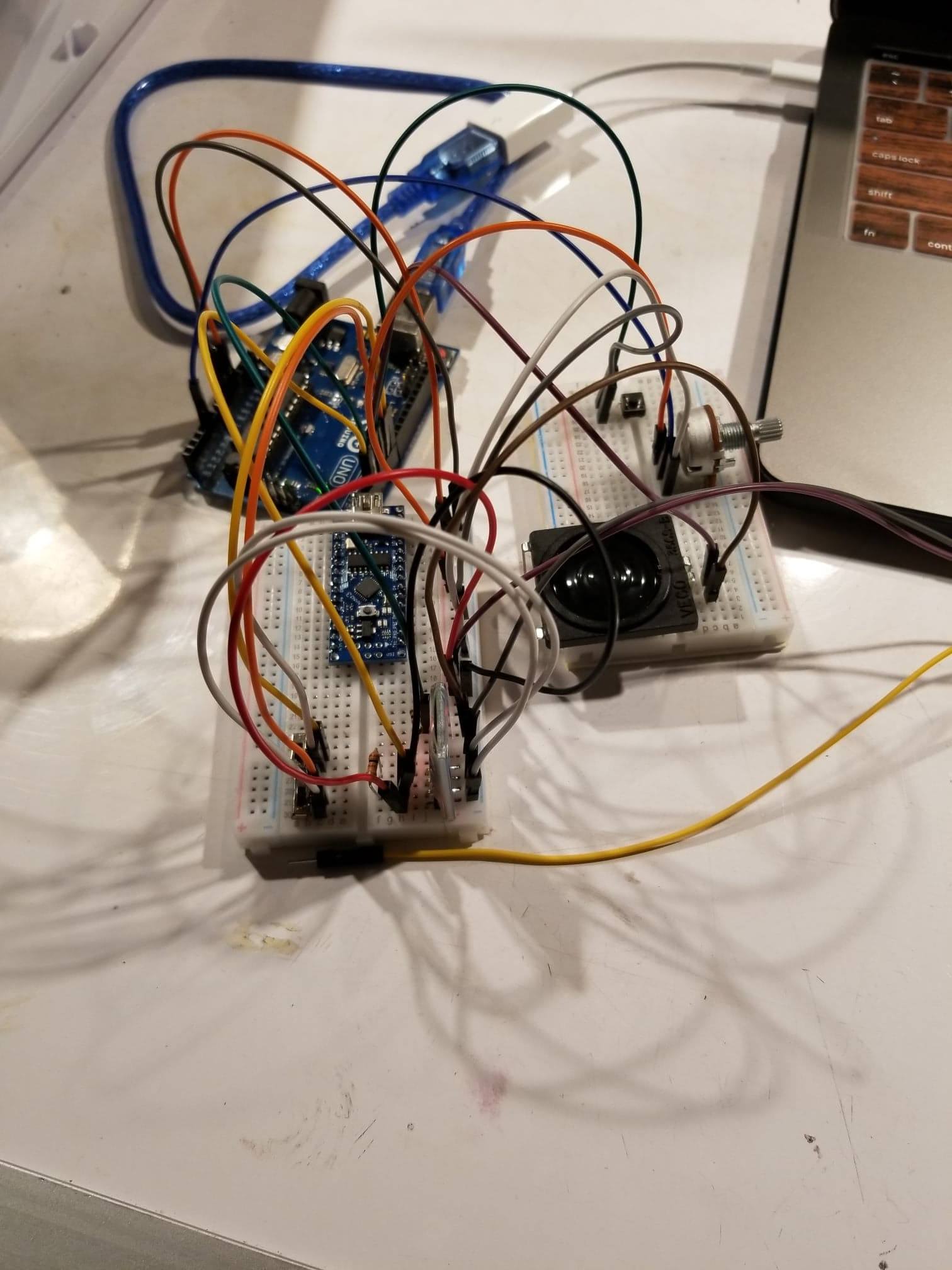 Tried to use the Arduino nano for the reminder but couldn’t get it to work reliably so I decided to use the regular Arduino. I was trying to create a more compact design, but since this is the first iteration, I thought I should focus more on the functionality 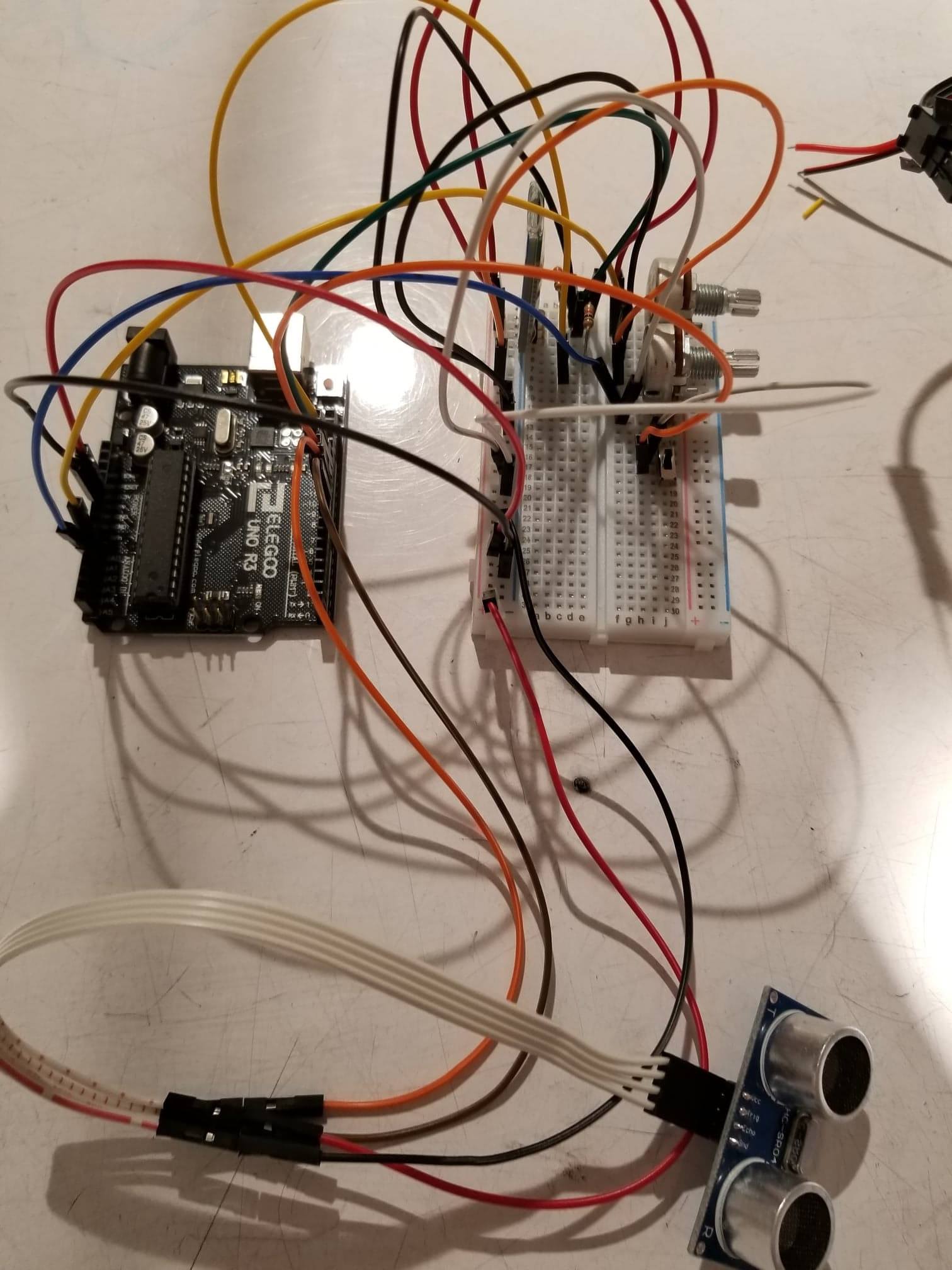 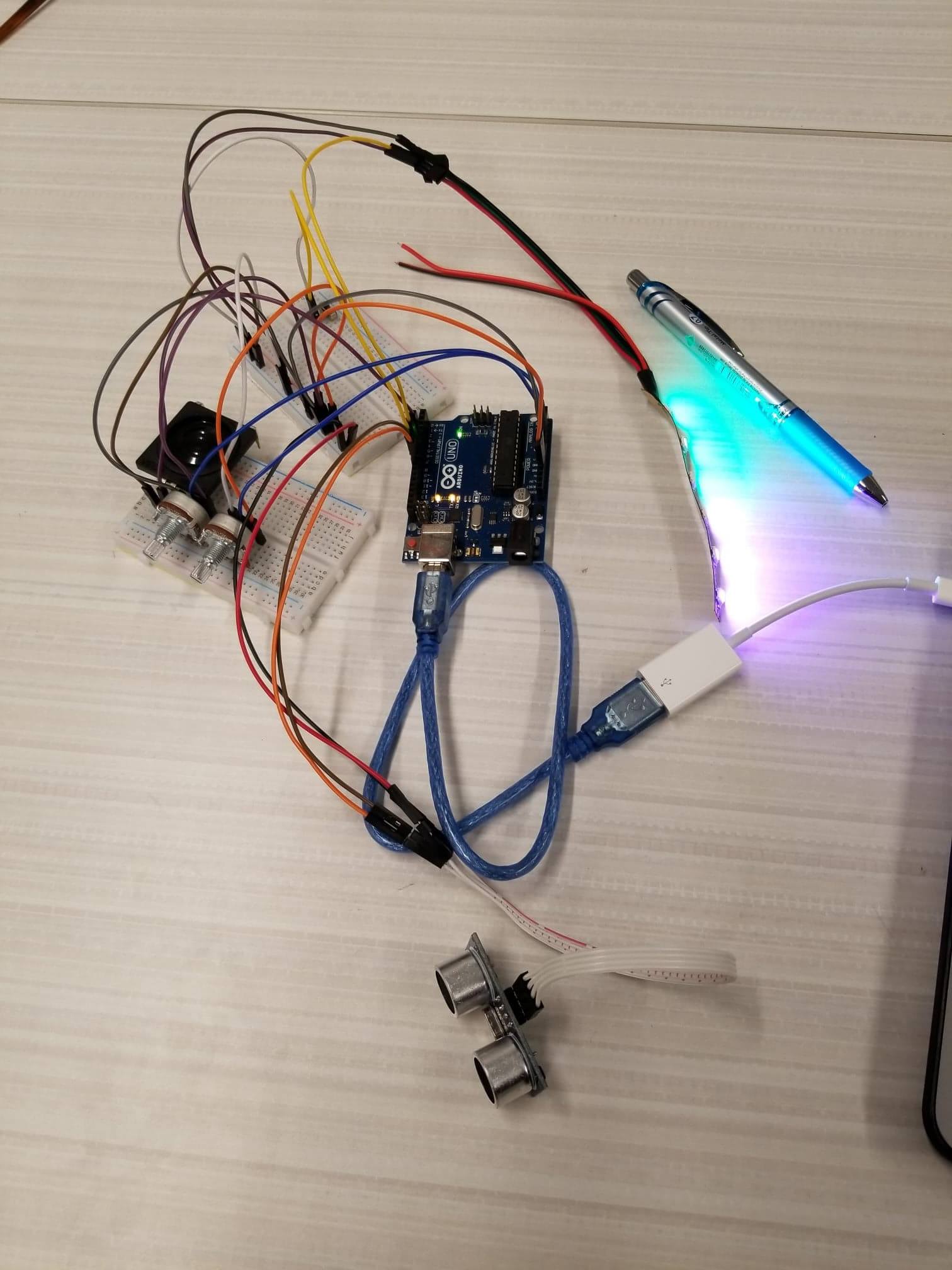 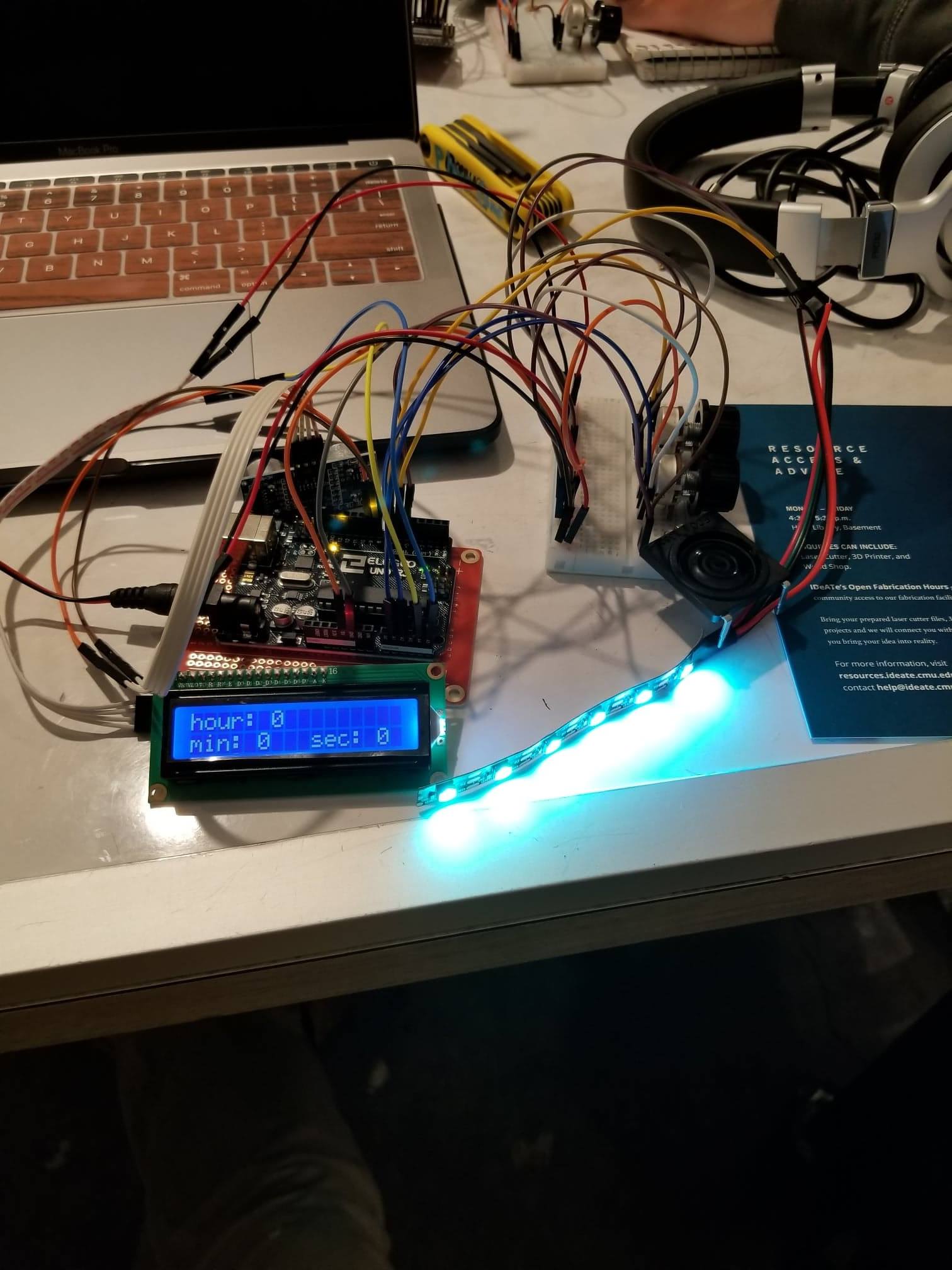 I added an LCD screen that shows the number of hours/minutes/seconds that the timer is currently set to. This was the final prototype before I started soldering and creating the housing. 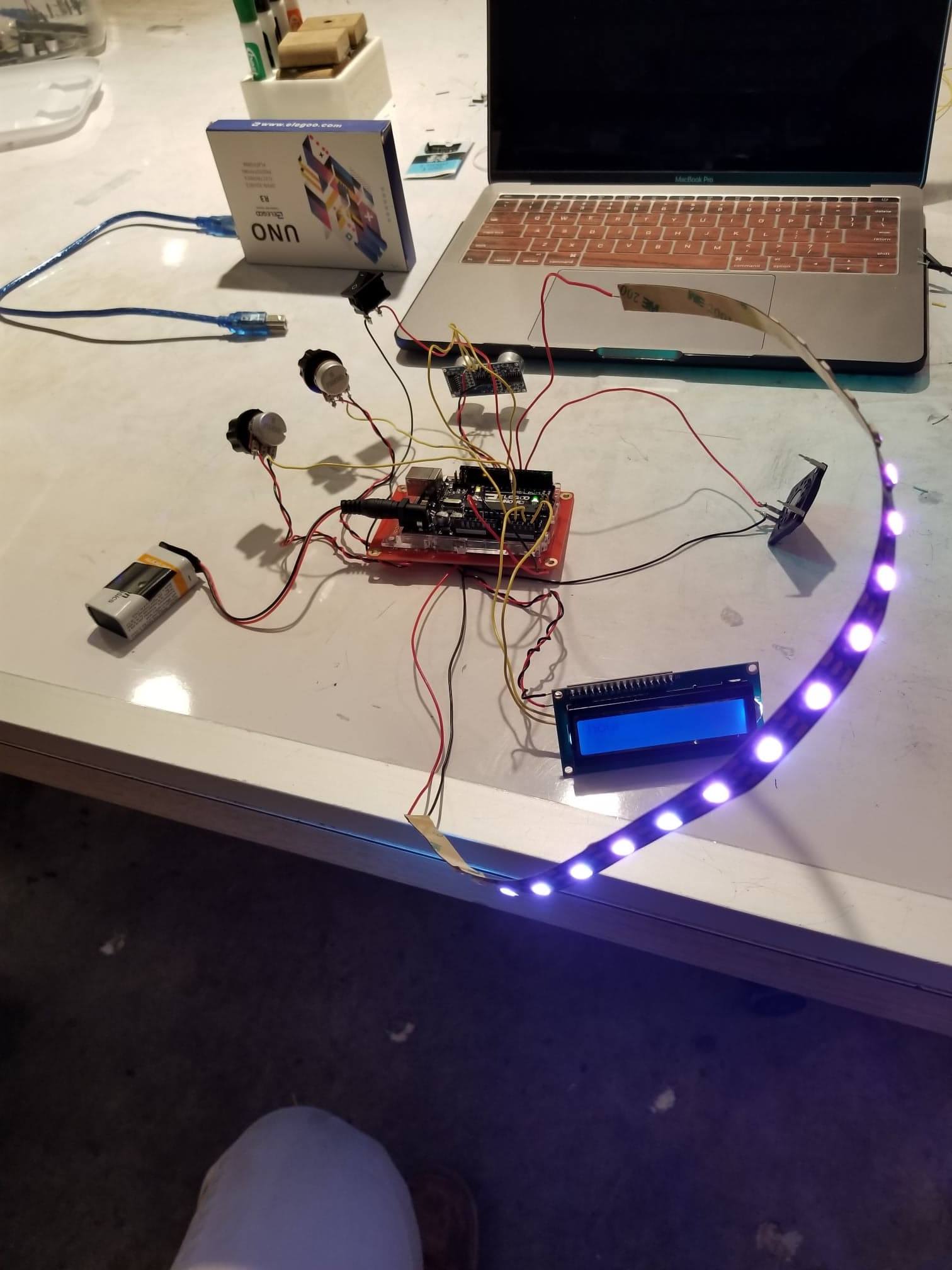 Everything all soldered up

I think that people enjoyed the aesthetic of the arctic frost acrylic housing around the circuitry for this project. It created a slight techy view into the inner workings of the box, while also making the LED usage inside the box look really cool. I think that one of the components that I should have worried about was the battery. I wanted this project to not be constricted by having to be plugged in but didn’t think far enough ahead, in terms of housing, for the battery’s location.

As for my own goals that I set for myself regarding the final outcome of this project, I feel good about my final product, even though I encountered a few hiccups along the way. I wanted to use the Bluetooth chips because they would allow some proximity sensor to detect the lack of motion then send that data to another chip that was in my pocket, so I would be able to receive the alarm even if I was in the other room.

I got a bit fixated on the usage of the Bluetooth in my project when I could have been creating something that would do essentially the same things I wanted it to do without Bluetooth with more simplicity and with fewer errors. After seeing all of the other projects, I really think that my project and Nathan’s project (see next paragraph) could be brought together and used to create a really effective reminder. The adjustable timing from my project would have been great with his box. If each slot had a timer for when you’d have to have it back in the box by, the box could remind you to either take things out of the box and/or remind you to put things back in the box. This double functionality could be used to help remind you of things to remember to grab in the morning and for reminding you to replace your things at night.

Nathan’s project – a box with compartments and it the alarm would go off if there was something missing from its area. He used this to organize all of his jewelry because he has quite a bit. Most were rings and bracelets, so I can see how it would be easy to lose them. 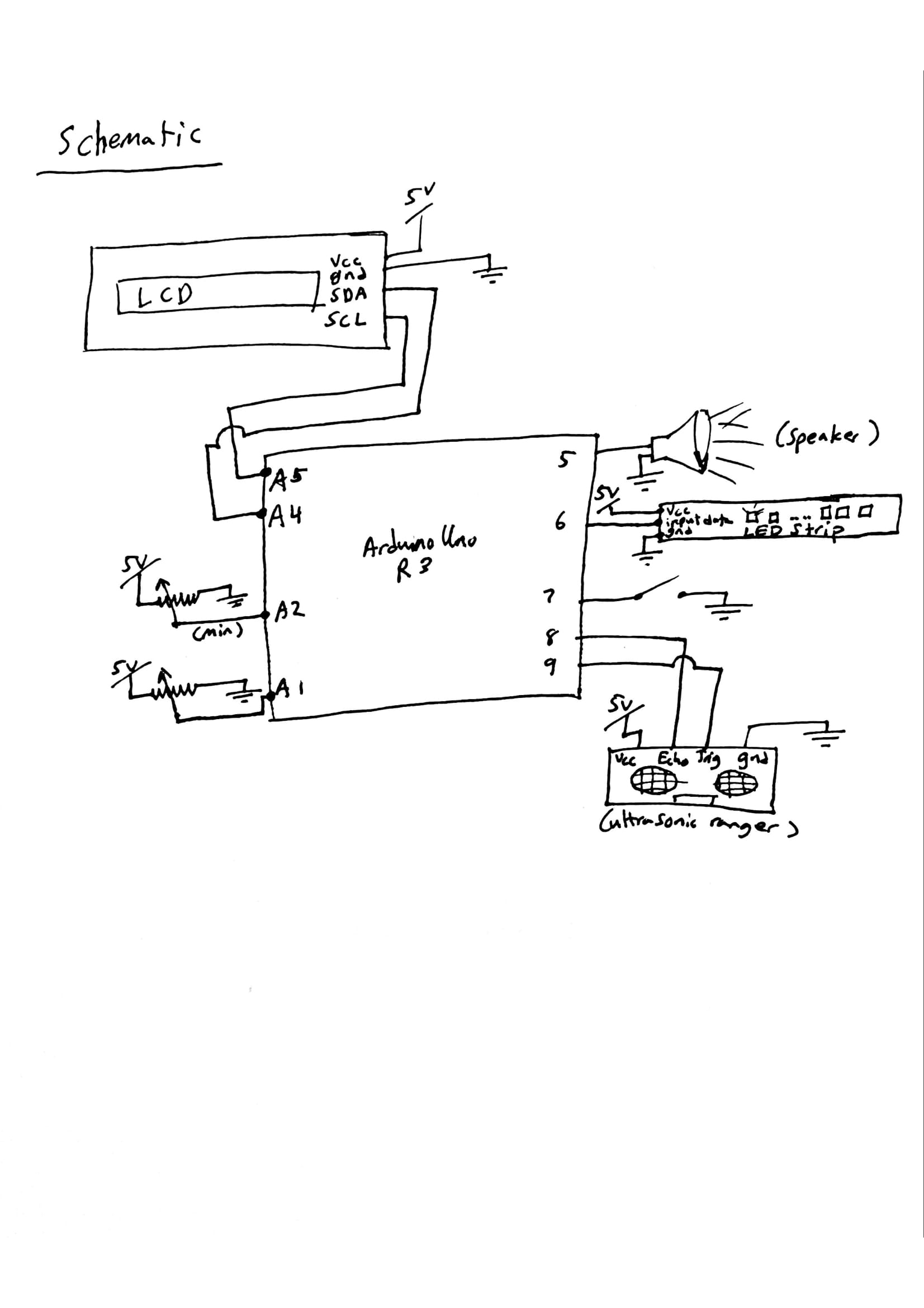