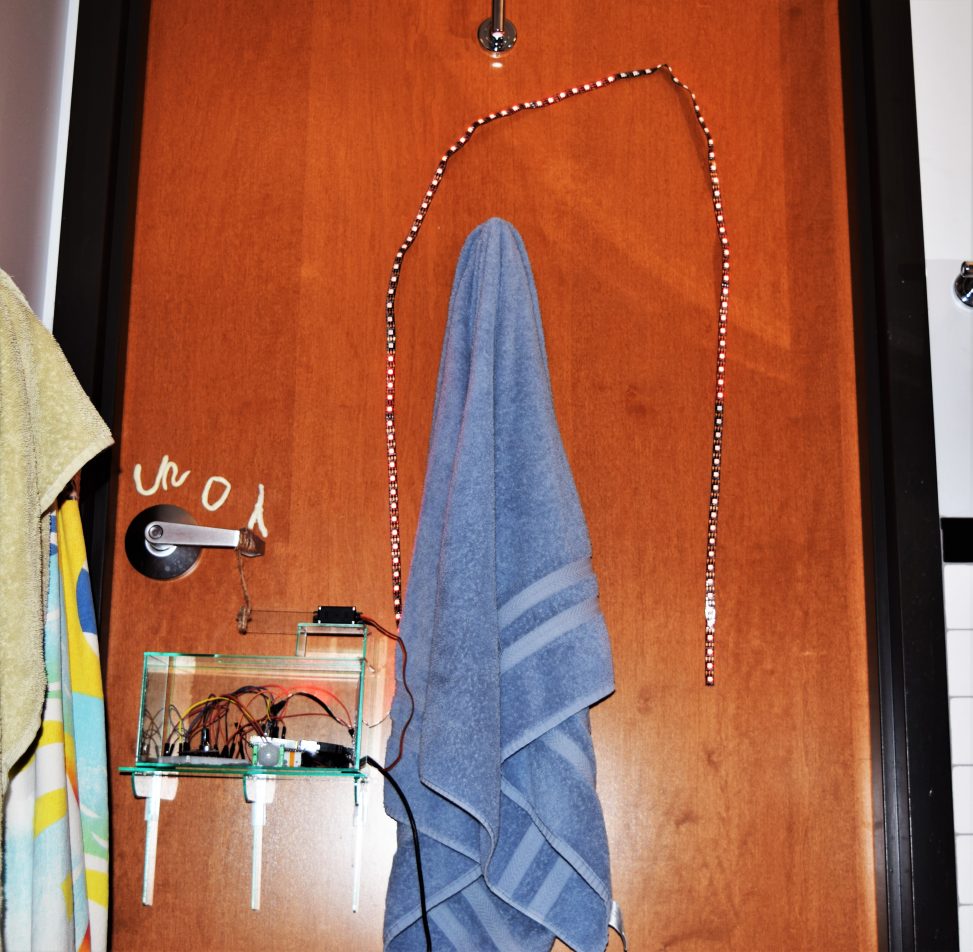 My project is meant to unlock the bathroom door after no motion for 30 minutes to prevent against us getting locked out when our suitemates forget to unlock our side. 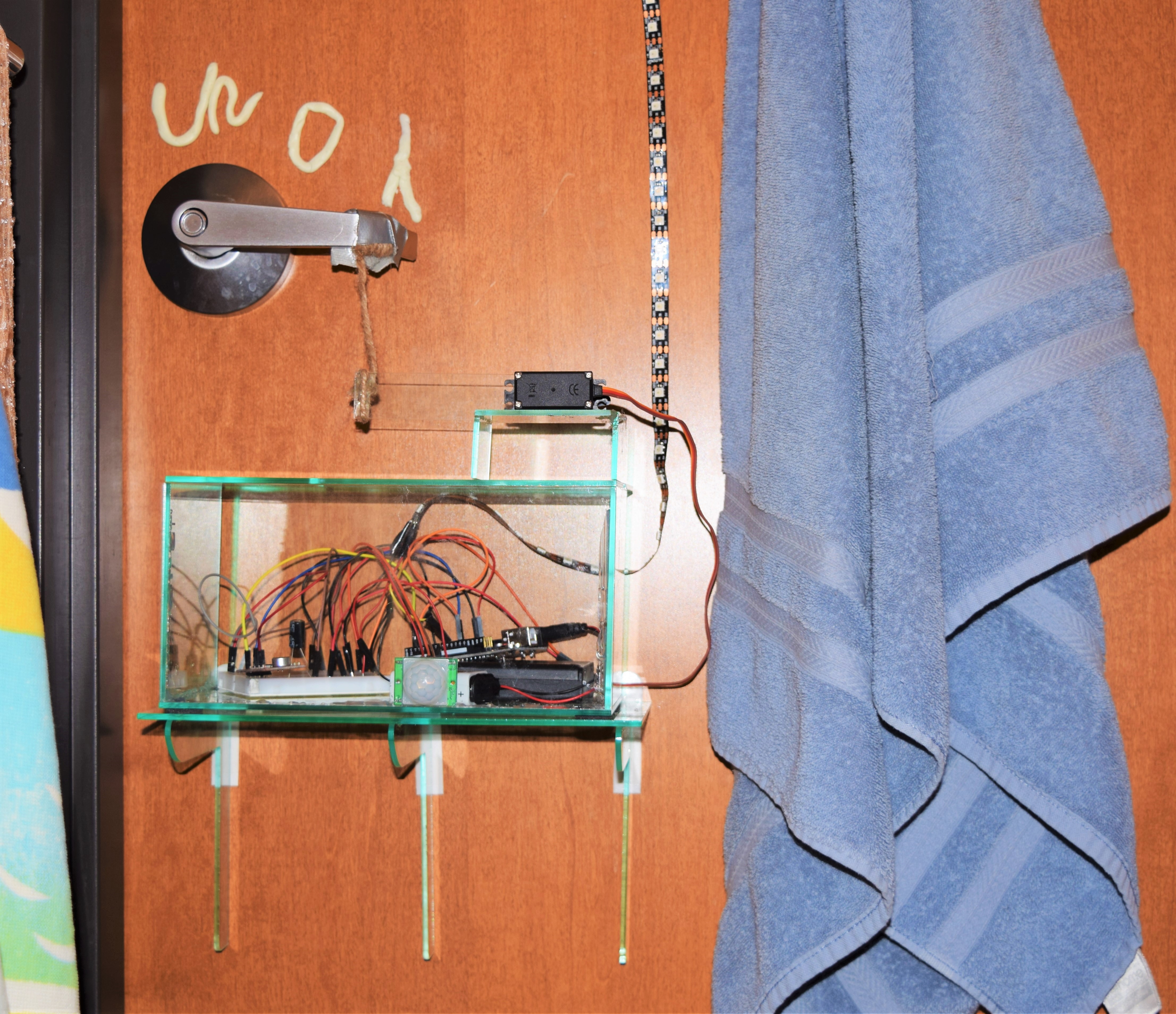 This is how my project is setup on the door with a proper view of its housing.

pir motion detector in cutout made for it

Motor mounted on top with slot for lever arm 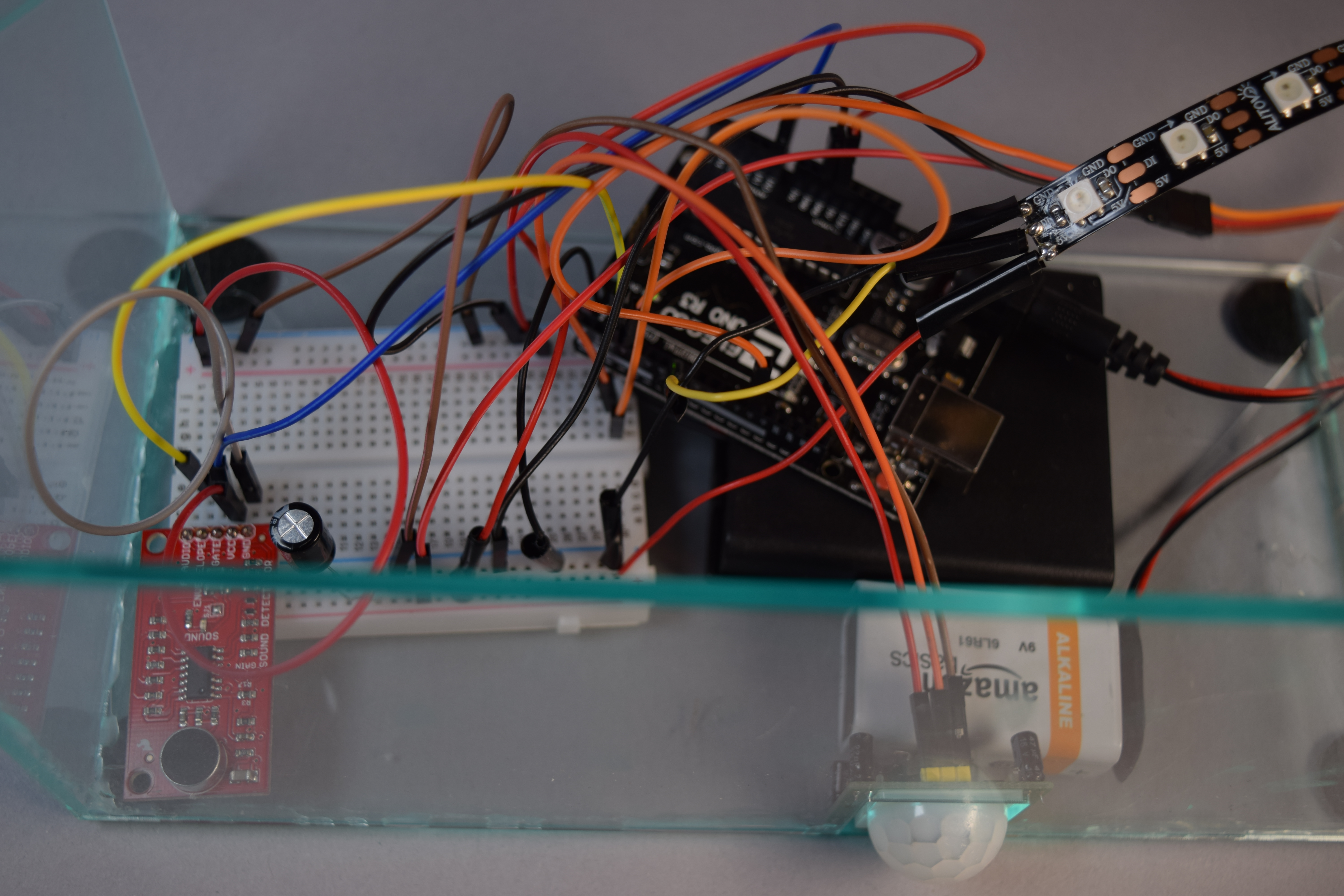 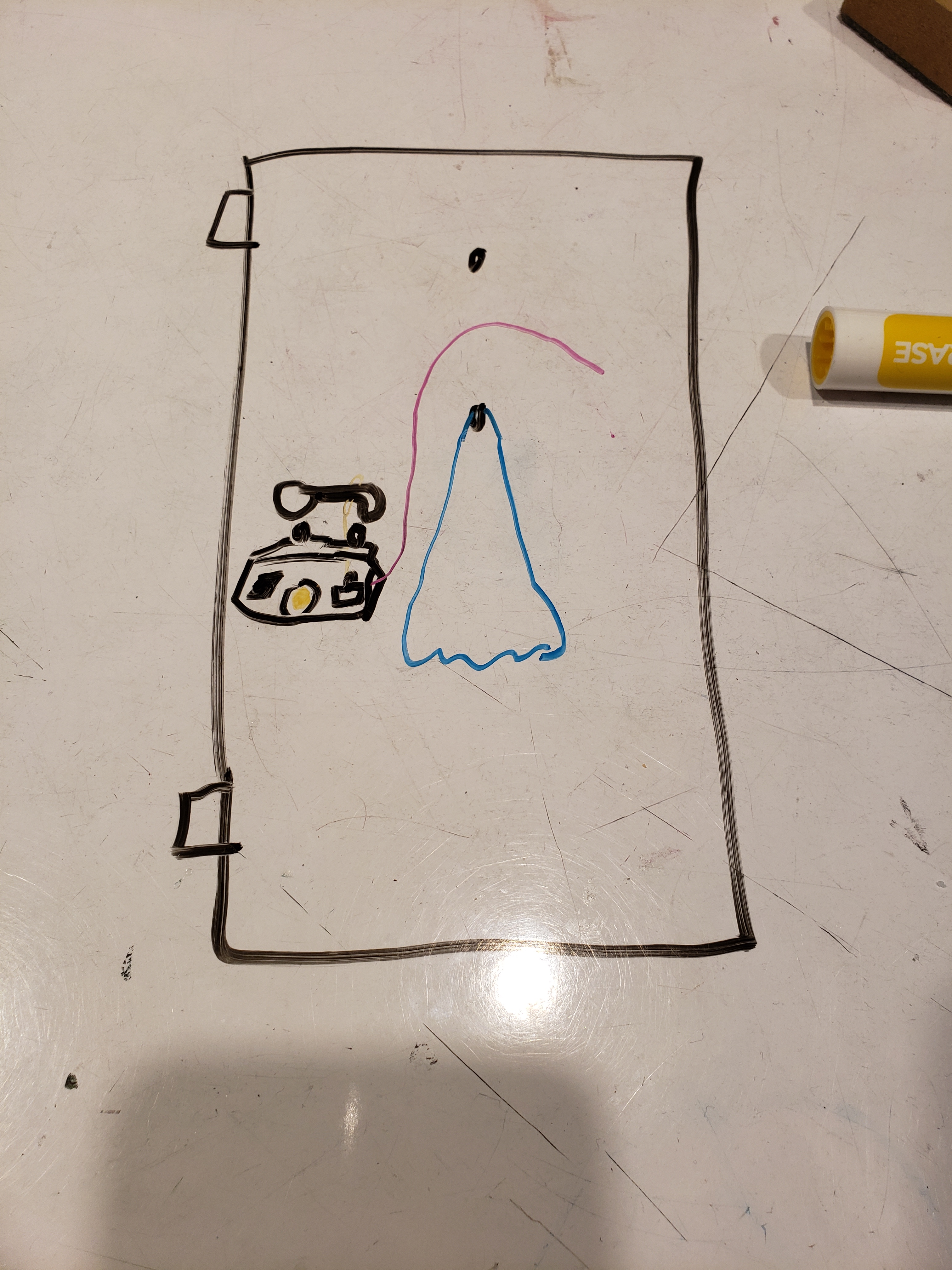 1st sketch with door in mind-would be hung on hangers 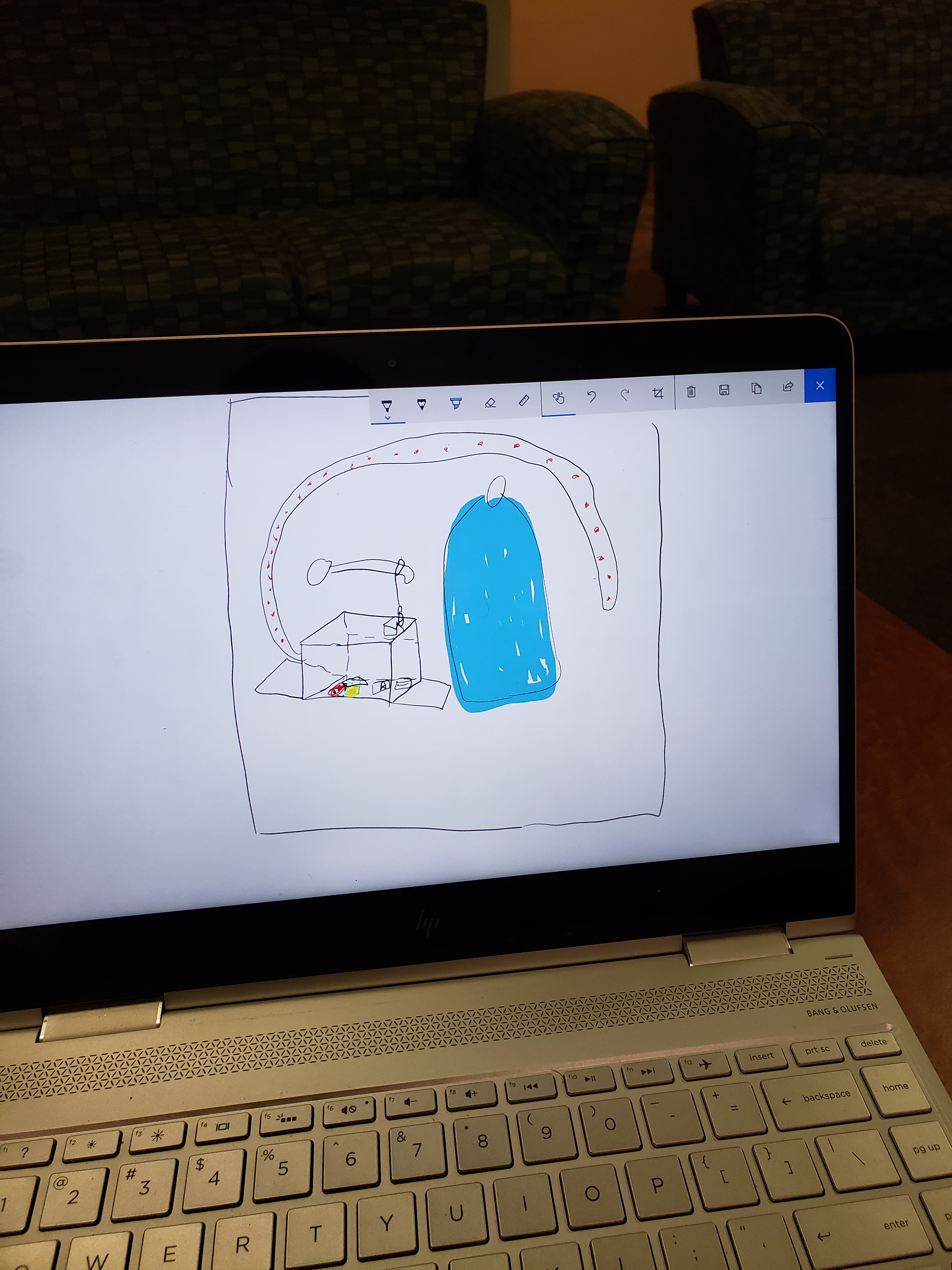 sketch with shelf but LED strip starting on opposite side 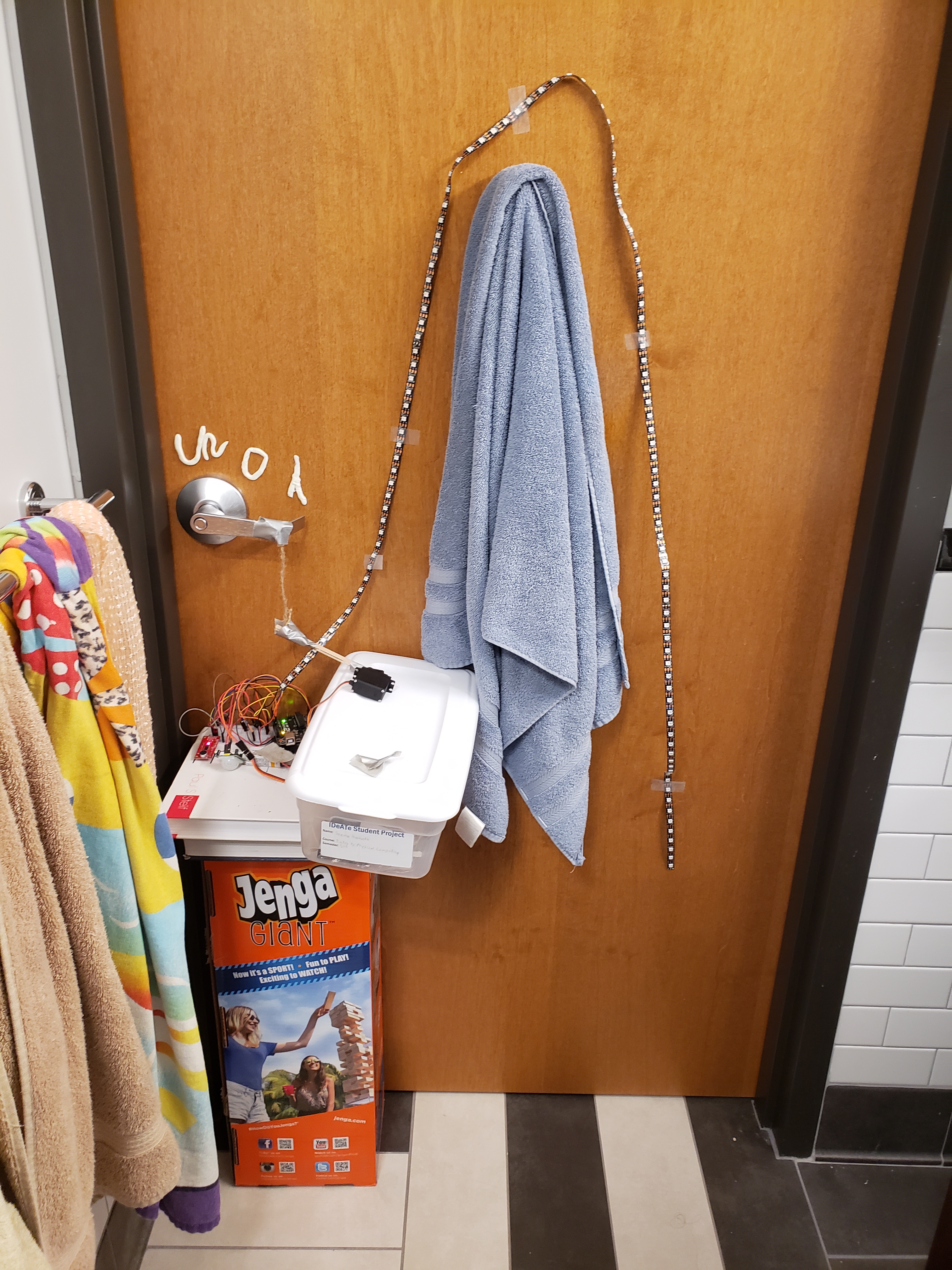 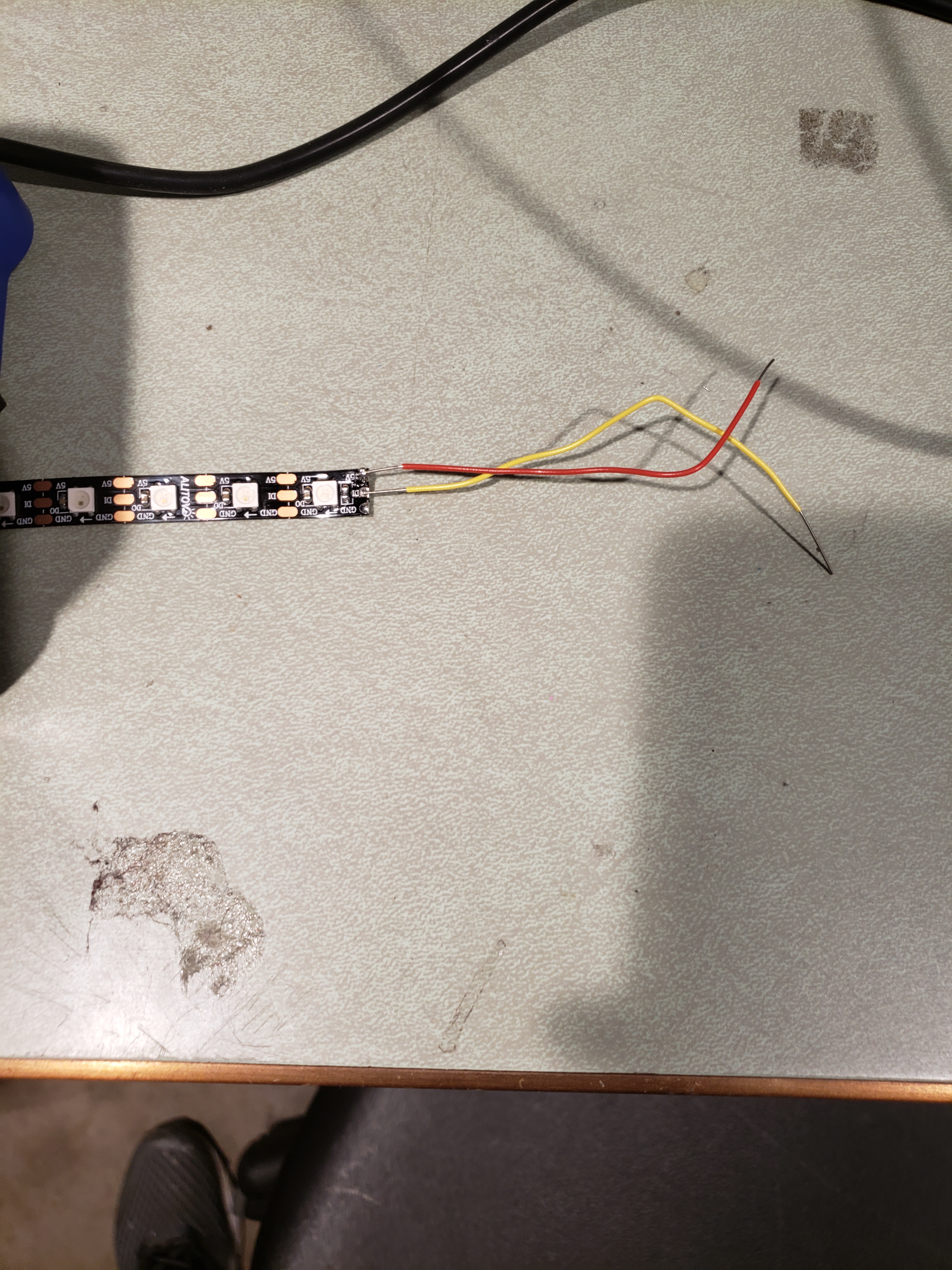 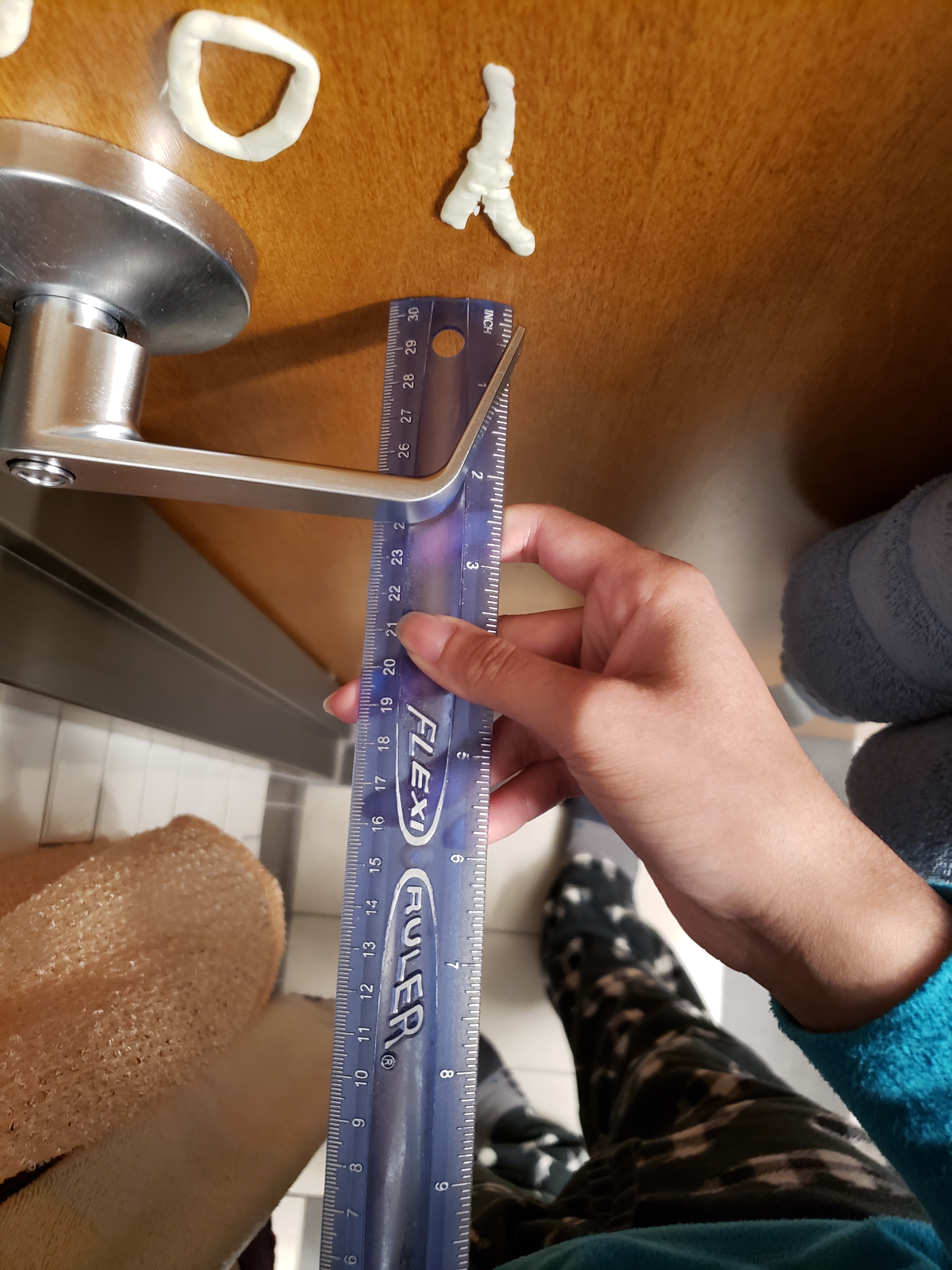 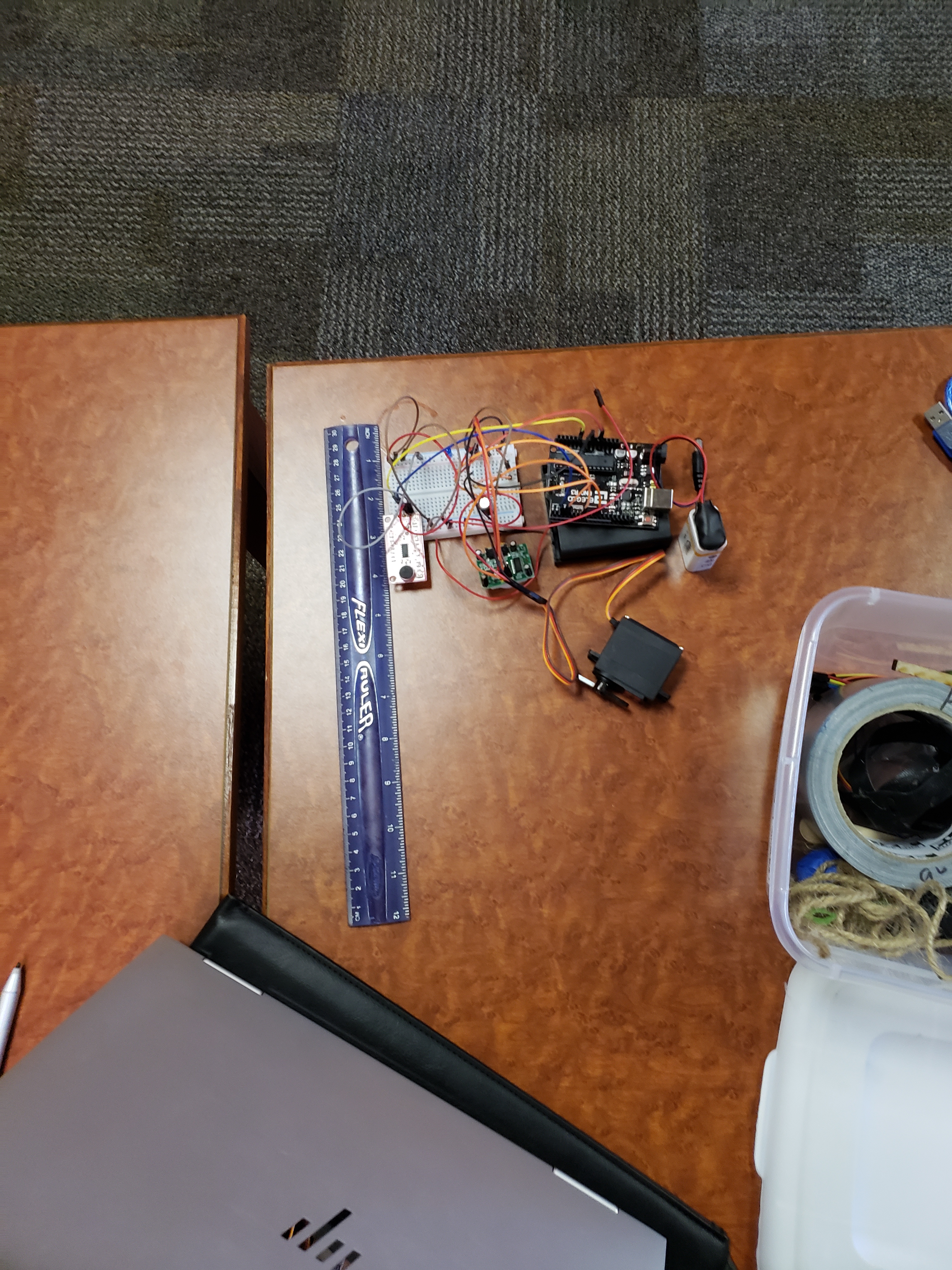 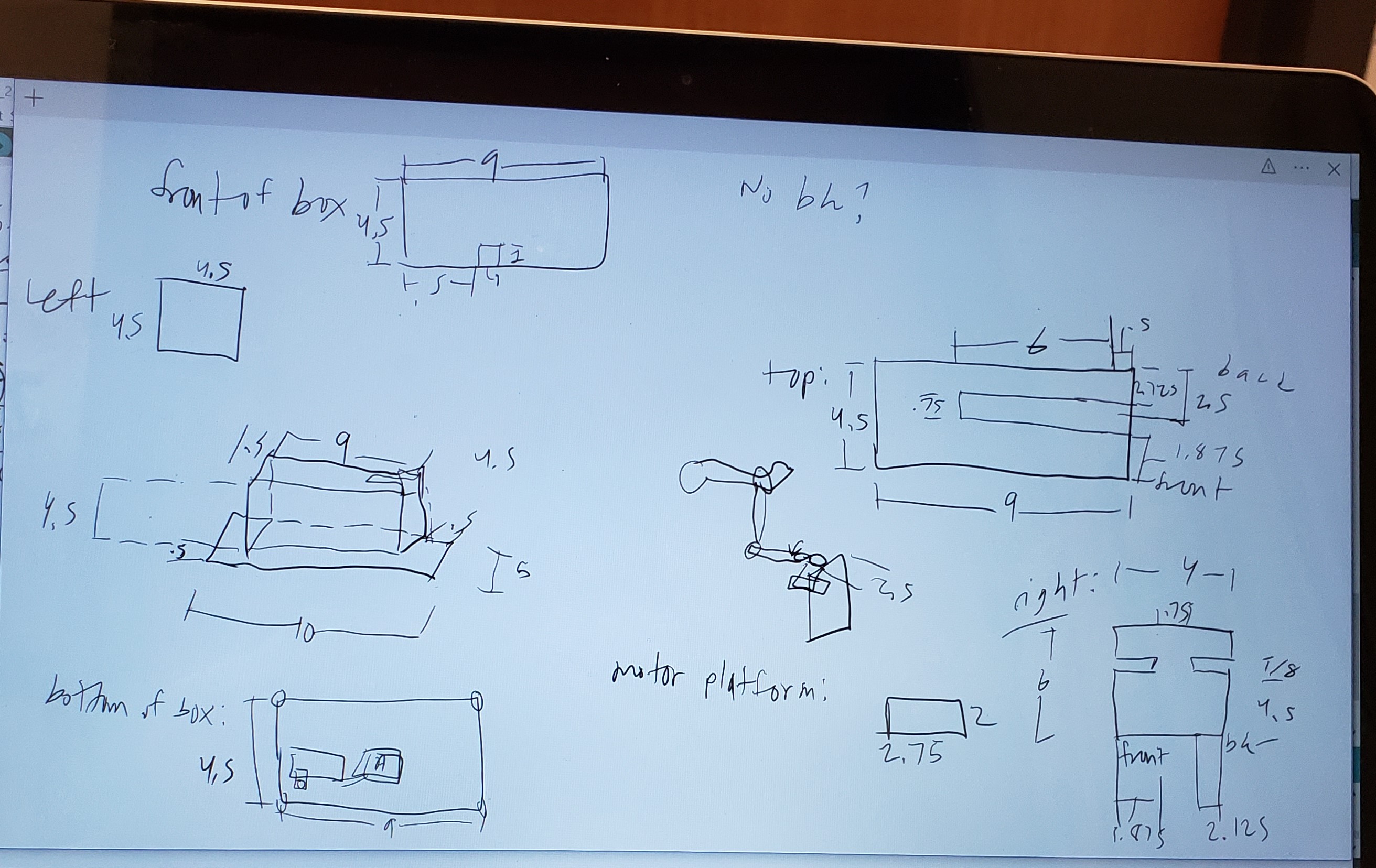 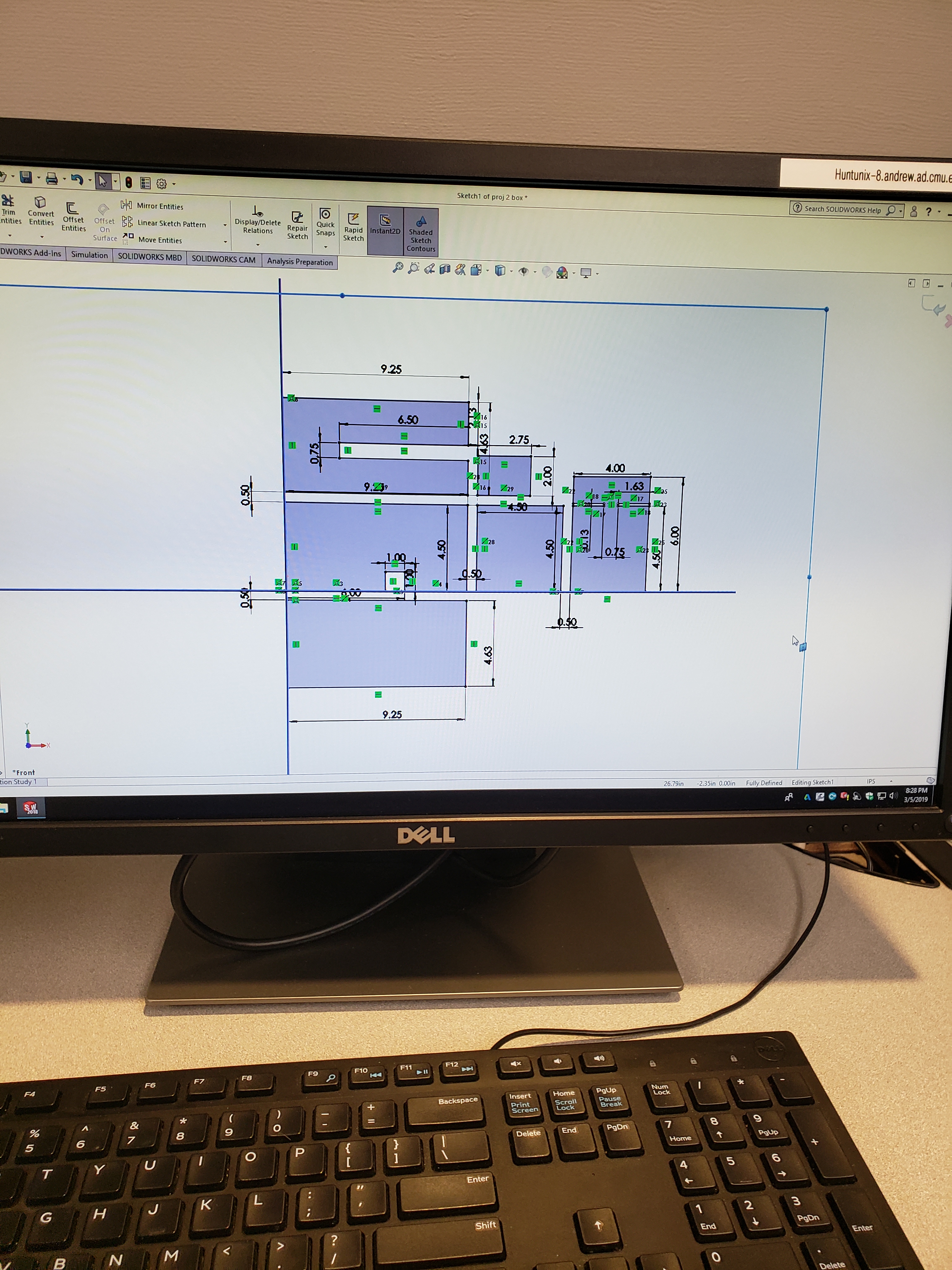 solidworks of box and motor platform

Overall, I am pretty happy with the way my project turned out. While it is by no means flawless and there are some things that I would do differently, I learned a lot from this experience and most important, I know that I did the best that I possibly could have and put in more than enough time and effort. While the motor was unable to actually unlock the door, I am very happy that I was able to make something that did exactly as I wanted it to in every other aspect. As someone reiterated, I “thought about a lot of different use cases for [my] device,” and I’m glad to say that the contingencies do function properly. Not being able to unlock the door is a mechanical problem separate from my code and electronics that with the materials available that are Arduino compatible, is out of my control. If I were to try and make this work, I would use the HS-5645MG motor by HiTEC. That motor unlike the one I used is made to have a much higher torque, but it isn’t programmed by the Arduino and so I used the most powerful motor that was.

I think that my project looks pretty cool with the tinted green acrylic and being able to see all of the wires; however, I do agree with someone who said my project “could be more compact so as to minimize space.” This would make it take up less room on the door as well as minimize the chances of someone brushing into it when entering and leaving the bathroom. I could have done this by soldering on a board. The sound detector is being rented from lending, but I could have soldered most other components with smaller wires so that it would take up much less space. This would have been a real challenge I learned that soldering is something that I need more practice at. Many of my connections had to get re-soldered on because I didn’t do a good enough job the first time and the few wires that I did solder took me a long time. Someone else had commented that “less LEDs could be used as more of a meter display of how long movement hasn’t been detected.”  While I do think I went a bit extreme on the number of LEDs used, I still like having the LEDs go on only as a warning. I believe that the meter would be an annoyance to whomever is in the bathroom.

Many of the lessons that I learned from this project can be summed up as someone else said, that in physical computing, a project tends to not work when you need it to. I learned just how frustrating it can be to try and figure out a hardware electronics problem as there are so many things that can go wrong, and it tends to be something that you don’t necessarily expect. As I was trying to get a picture of my project working for this documentation, my battery pack wasn’t supplying power even though the batteries weren’t dead. At first I realized that the ground wire was frayed, but that wasn’t the root problem. It took a very long time to figure out and fix, but it turns out that in the holder, the batteries weren’t properly touching the ends of the case as a spring was stuck at a too compressed state. I also learned the importance of covering up leads, especially on power and ground. As I was just about done with my project and only had to hot glue the motor on, I accidentally touched power to ground while I was unplugging it from the breadboard to try and save the batteries for the crit. This caused quite a bit of damage and took awhile to fix. Seemingly small problems made this project quite frustrating electrically, but thankfully, the mechanical hardware part of it went well for me; my knowledge that I’m better in that realm was echoed from this project. Coding wise, I learned quite a bit and it went much more smoothly than electrically. I learned about interrupts as well as how to reset to the beginning of a loop with one. I also learned the usefulness of the time library and how to use a pir motion detector. 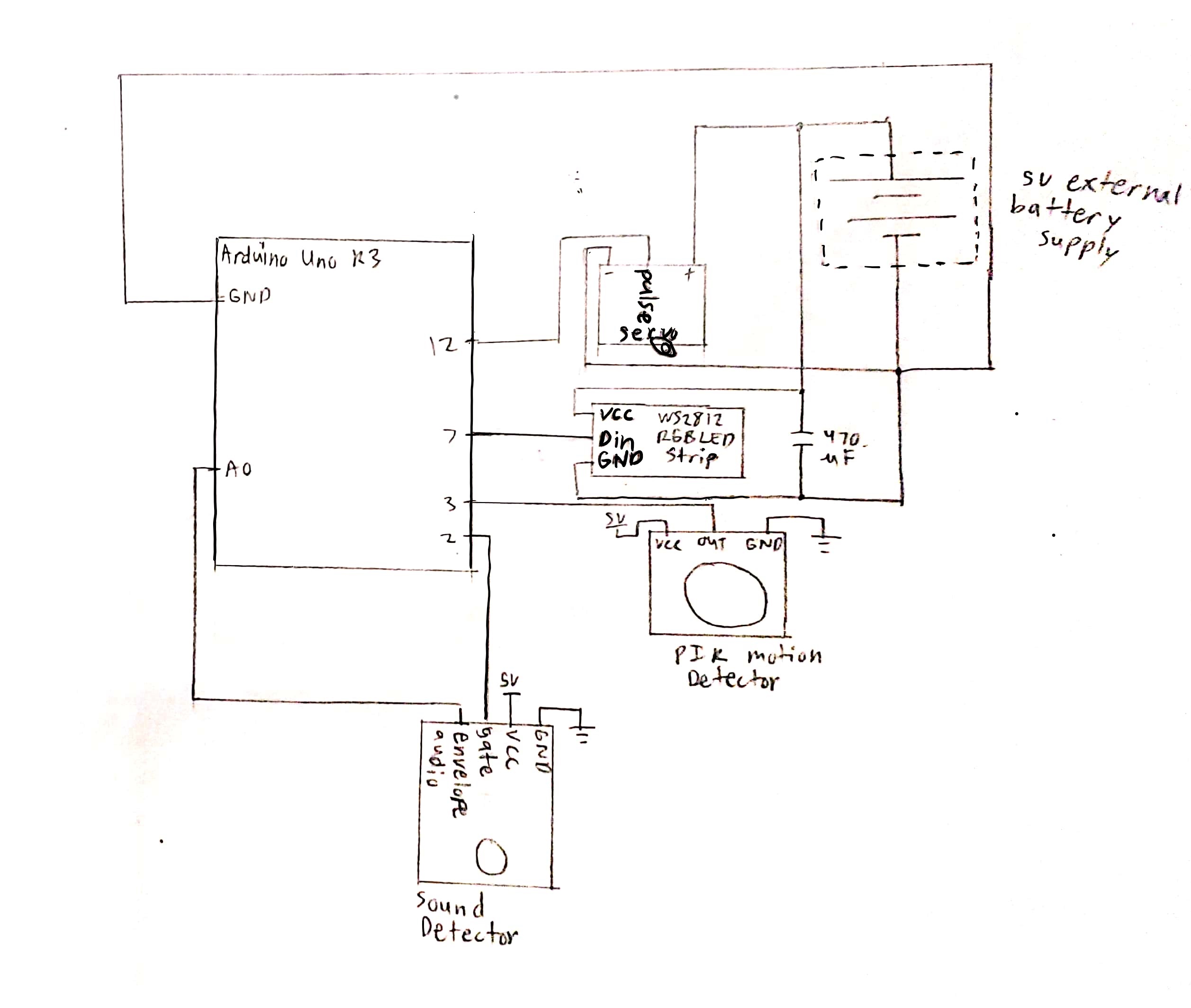