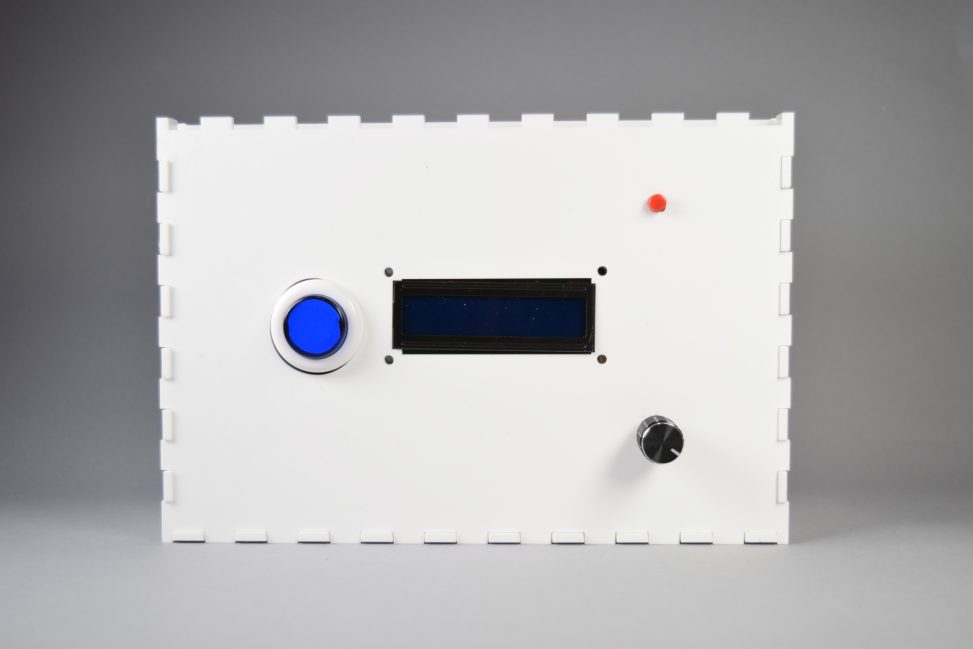 Description
A box that acts as a to-do list, with a user interface comprised of buttons and an LCD screen.

Crave the satisfaction of hitting a button when you finish your homework? Do you find written planners too boring? This is the device for you! 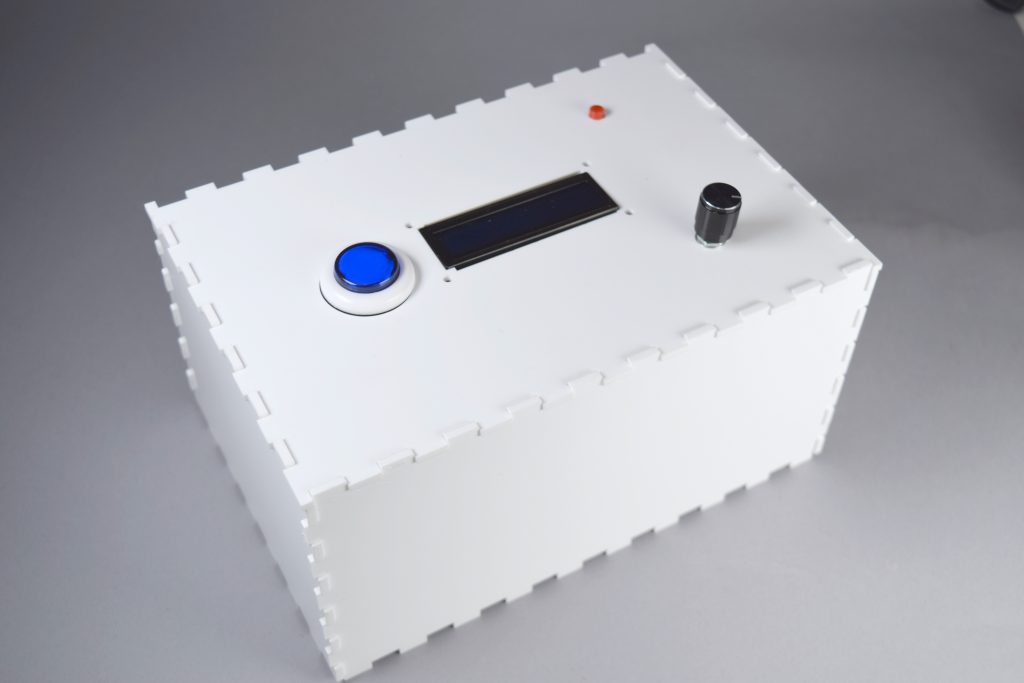 Welcome screen, prompting user to press taskbutton. All the changes in the system occur onscreen. 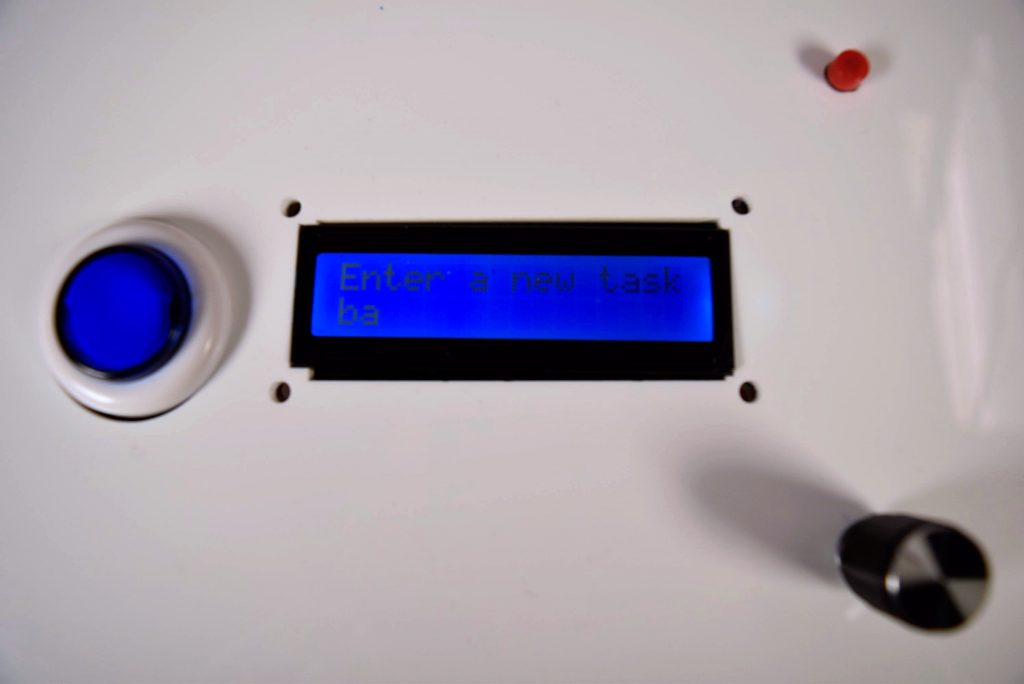 Input task function of box, controlled by bottom right button (rotary encoder). (Not sure why text is fuzzy in this post; looks fine on my computer)

My first decision point occurred when I was deciding on what the main goal of this device would be. Initially, I was considering using the device to schedule the tasks that I input, but I soon realized that using the input to schedule work time around my calendar was a deeper software task that I would have spent an inordinate amount of time on compared to the hardware portion of the project. So the device became a simpler to-do list, allowing me to focus more on things like task input.

A second decision point was made when deciding on the appearance of the device, after I had most of the electronics working. I had lasercut a clock for another class, and was considering modifying this to give the device a nicer appearance and use the hands of the clock to set a timer on each task. However, it proved tricky and time-consuming to configure a servo to receive input by manually repositioning the clock hand, so I decided to lasercut an acrylic box instead. Perhaps with more time the clock idea could have worked out, but I thought focusing on the design enough to do it justice would have detracted from the function and purpose of the device. 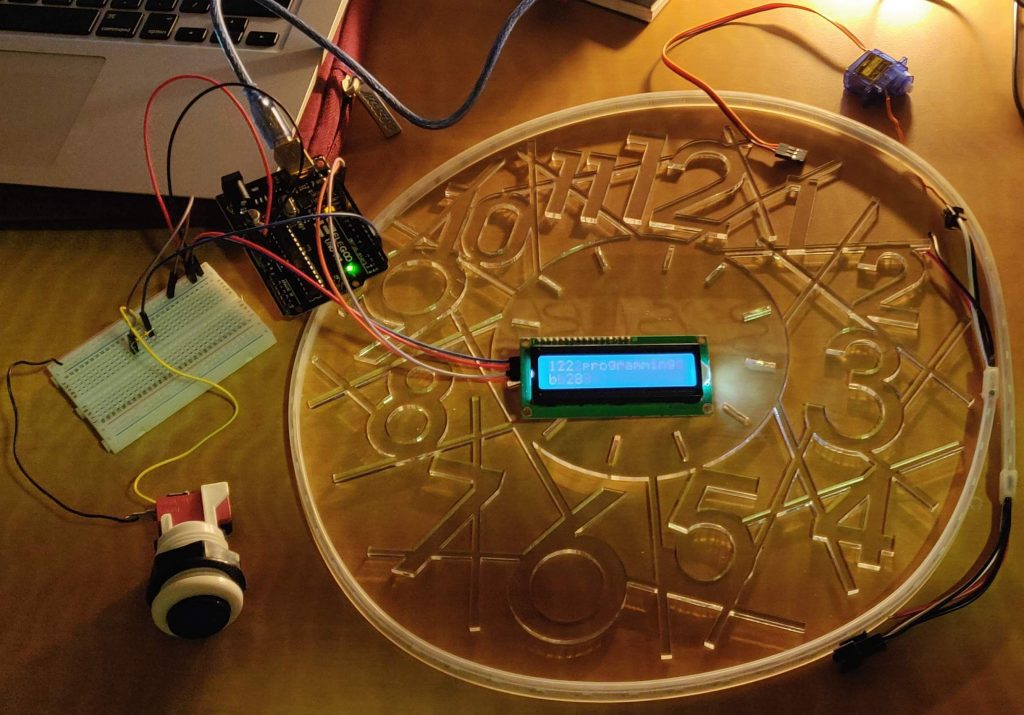 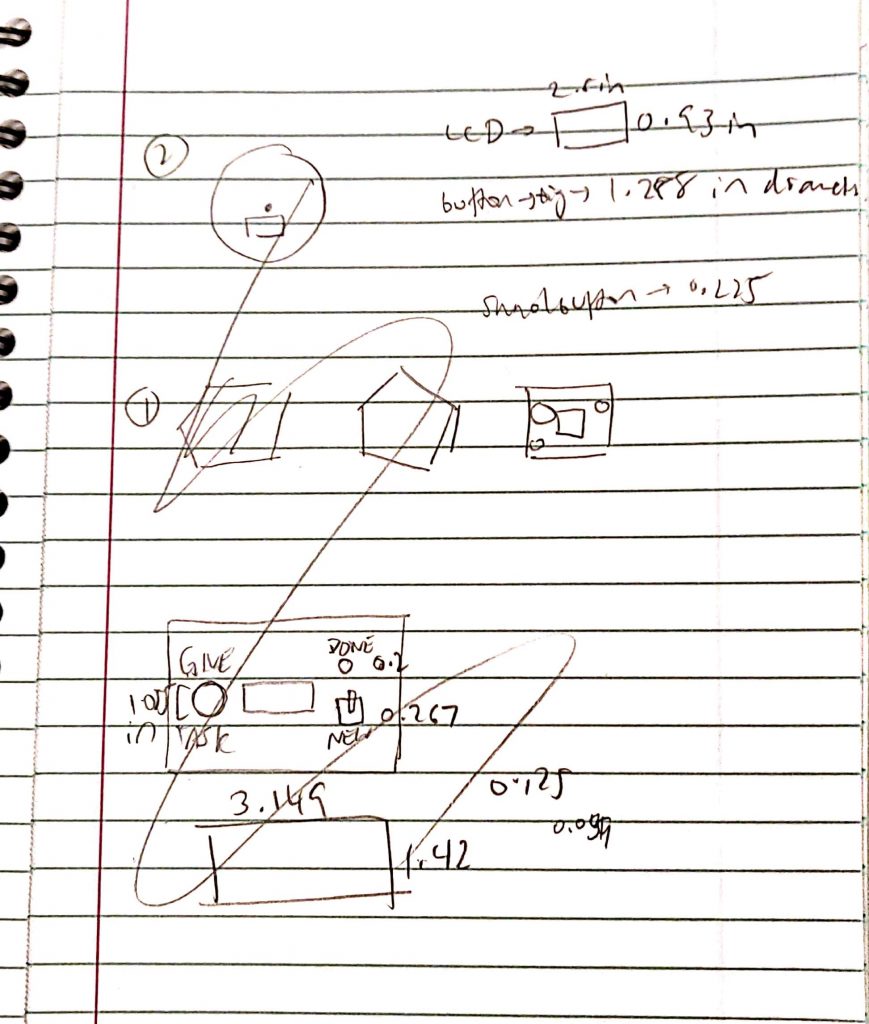 Taking measurements, deciding how to design the top of the box as simply as possible

After laser cutting, realizing that some holes were not the right size and drilling them to the correct diameter 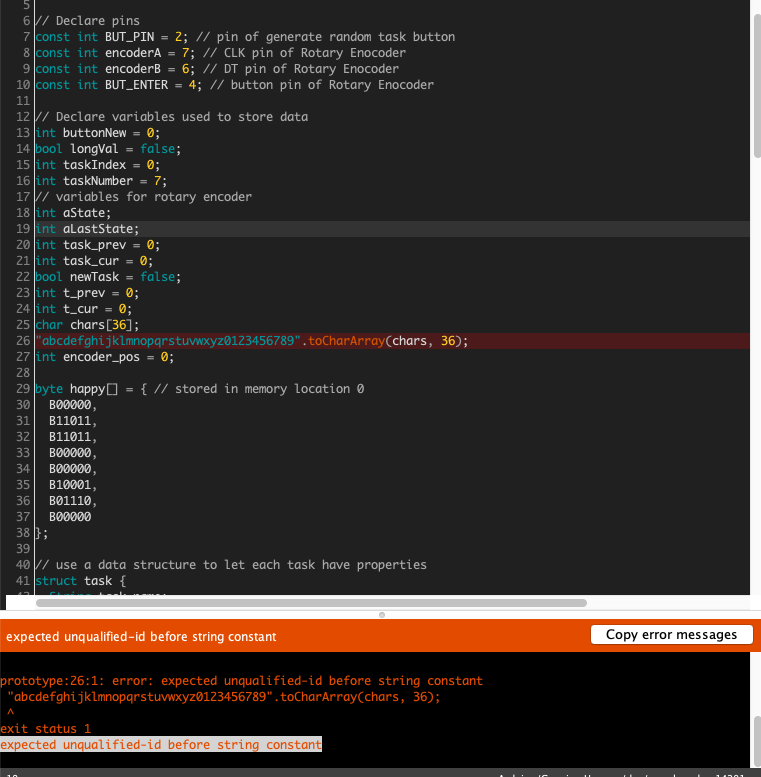 Got stuck on converting the characters for task input to an array that I could index through; kept getting this strange error and couldn’t figure out what I was doing wrong. I solved this by realizing I could just cast the string to a char, so I stored the string in a char type variable. I spent way too long trying to fix this before realizing the much simpler solution. 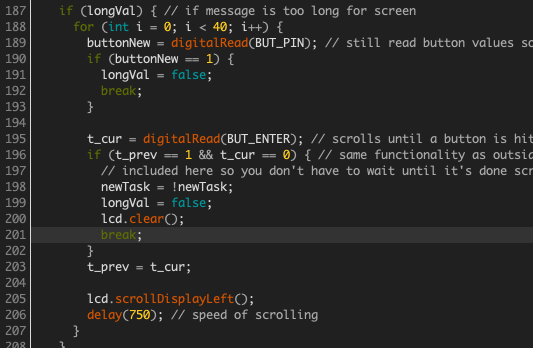 I also spent an inordinate amount of time making sure the tasks, if they were too long for the screen, would scroll across the display. As a result, I wrote a lot of redundant code so that this would work in all situations. I eventually solved this by restructuring my code so that there were two states: one when there was a new task to be input, and the other when there was not. This way less code had to be repeated.

On the whole, I’m satisfied with how the text and interface with the LCD screen and buttons worked out. The device met the goal of having a functioning task entry and display system. Although the device did reach its “minimum viable product” stage, I’m a little disappointed with how it came out in terms of capability and performance (it got somewhat glitchy from wires disconnecting from the Arduino) and wish I spent more time on making it robust.

At the same time, though, there would always be more I could do to make the device more useful or look nicer. I would have liked if I made the user be able to change factors such as the number of tasks (essentially the length of the task list) through the interface, or implement sound effects so that finishing a task is more rewarding. As some of my peers said, “having some sort of feedback when you complete a task would be nice”; “It would be nice to have a reward at the end!” I do agree, as this would make the device more enticing (and fun) to use. I would have also preferred the original clock idea to make it more aesthetically pleasing and implement task scheduling. If I keep working on this, I will likely implement all these smaller ideas and return to the clock design.

Through working on this project, I found that I spent a lot of time focusing on minor details and features in code, like making the tasks scroll consistently. However, I spent extra time doing this instead of considering the aesthetic aspect of the device, and the aesthetics of this project are much more lacking. I realized that I take more time to work out the kinks in my code than I need to, and should instead allocate more time to the construction of my project, as that took more time and was more troublesome than I expected. The scale was off on the laser cutter application and I printed out the box significantly larger than expected, and didn’t have enough material to retry, so I was less than satisfied with how the appearance of the box turned out. My peers also suggested that it be smaller: “It would be pretty useful as a compact handheld tool”;  “The smaller display would help keep things together.” I agree with these statements, as a task device such as this would be most useful when more desk-friendly and usable, or to carry around in person. One person said “I wish the words were lasercutted on the box so that there’s an indication of what the buttons do”; this is a solution I never thought about to make the buttons more intuitive, so the user wouldn’t need to simply figure it out. 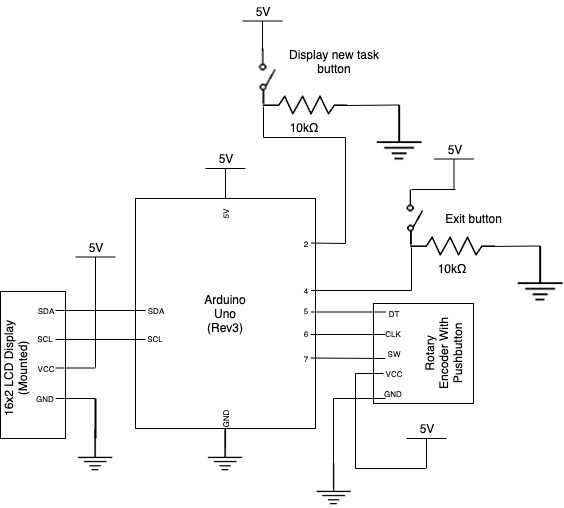