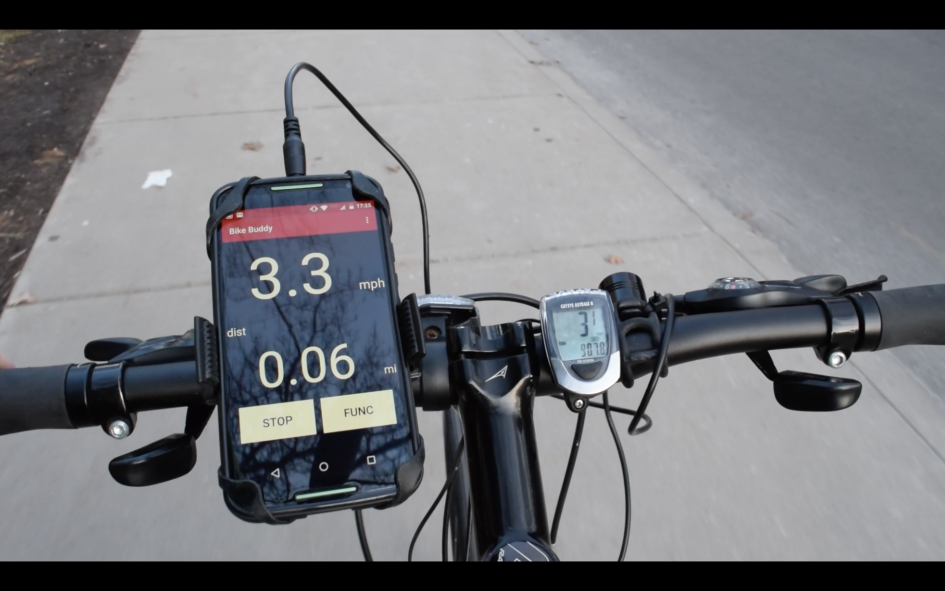 Bike Buddy is a bike computer that uses sound to generate its data. Made using minimal components, Bike Buddy uses a simple contact mic that plugs directly into your phone for maximum convenience.

I bike a lot, and thus, I like to keep track of the miles I ride, and how fast I am going. This semester I also built a bike computer with a group of friends for Build18, so I had this in mind when I approached this project. However, unlike the bike computer I helped make for Build18 (seen below), Bike Buddy is minimal and uses an android phone to process and display the data from the wheel. My Build18 bike computer used rare earth magnets mounted on the wheel to trigger a hall-effect sensor mounted on the fork. This information was then processed and displayed by a light blue bean microcontroller.

Once I had the idea of using sound as the input to a bike computer, I was also inspired by the childhood practice of sticking a card into the spokes of a bike wheel to make lots of sound. I started from this concept of having something stationary on the frame hit all of the spokes, but after several iterations, I settled on what became Bike Buddy.

I used a piezo contact mic to pick up the sound of a zip tie on the wheel hitting a piece of wood mounted on the front fork. I then plugged this mic (with very minimal circuitry) into an android phone with a custom app.

My initial idea was to put a zip tie around the fork of my bike and have it stick into the spokes. I would then pick up the ticks with the electret microphone. I had intended to mount a light blue bean on the fork in a laser cut enclosure. The bean would do all of the data processing needed to get speed and distance. However, this proved to be overly complicated in several respects. First of all, every revolution, many spokes would be hit, and the spoke pattern on my wheels is not completely even. Additionally, the electret mics have a significant amount of noise (especially at high speeds) which would make detecting the spoke hits difficult. Also, the bean introduced the complex problem of visualizing the data after the sound was processed. Because of this, I settled on mounting a piece of wood onto the fork and having a zip tie around the air valve on my wheel. This way, there would be only one tick per rotation, and I would get a great place to mount a contact mic. The contact mic reduced almost all outside noise, so I was just hearing the ticks of the zip tie hitting the wood piece. To overcome the issue of visualizing data from the Light Blue Bean, I just cut it out entirely. I plugged the mic directly into the phone via a TRRS plug. In order to get good data, I had to wire the piezo up to a capacitor and a pull down resistor. I also added a 100 Ohm resistor between the right and left audio output channels to ground so that the phone thought it was a pair of earbuds. Circuit laid out on perfboard

I soldered up the circuit on some perfboard and then used heat shrink to protect it and the piezo. After I had the physical and electronic hardware sorted out, I had to write an app that read the mic and processed the data. I used the official android documentation and lots of googling to solve the many problems that came up when making the app (I have omitted these as many had to do with problems that were specific to my setup). In order to actually read the audio input on the app, I used the AudioRecord class in a separate thread.

The code for the app is on github: https://github.com/arathorn593/Bike-Buddy

While working on this project, I learned about how a simple project can still have lots of interesting tech and design problems. However, I am most excited about the future possibilities of this device. Since the processing is done on the phone, the speed and distance data could easily be linked to GPS data or hooked into a quantitative self ecosystem.

Additionally, I am very interested in a potential varient of this device where the mic is mounted directly on the front fork. Then, potholes could be detected and linked to GPS data from the phone. This would provide a way for road conditions for bikes to be mapped in real time.