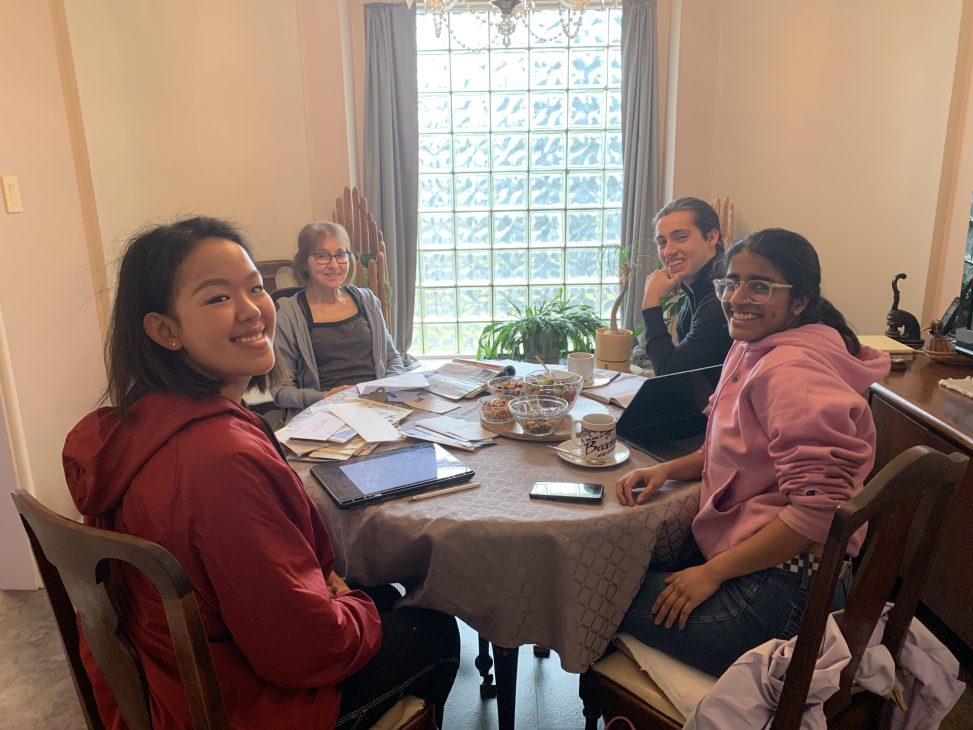 At the initial meeting, we wanted to gain some insight into what our client, Lois wanted for her assistive device. We met Lois last Monday at her home on Monday, March 25, at 9:45 AM.

We planned out the meeting on a Google Doc and had a series of questions on hand during our meeting. During the meeting, Elena took notes and photos, Connor spoke to Lois, and Aditi spoke to Lois and took notes.

End of Meeting: Tour of Home

Lois took us around the house to show us where she kept her music sheets, important documents, and something she holds very dear–her father’s letters. Through the house tour we saw what she described in the meeting as well as the scope of the problem we were trying to fix. At the conclusion of the meeting we told Lois we would keep her updated on the process of the project and which idea we were going to go with.

At the start of the meeting, we learned a lot about Lois. As a native to Pittsburgh she had a lot to say regarding the ways that her city has changed. In particular, she described her home town, Beechview, and the commuter train that runs through there. It was important getting to know Lois, so we let her talk for a good 15 minutes on this topic.

After, we decided to jump right in by giving Lois a description of our project guidelines and timeline. We were pleasantly surprised by her preparedness. She started off with an idea that noticeably made her excited. The idea was to create a TV volume regulator. Lois and Irv were sick and tired of changing the volume levels countless times due to loud commercials. We decided that this project was a good option, but quickly moved on from it in order to keep the meeting flowing. I think we cut this idea short and should have asked Lois for more information because it is well within the scope of the class. Not to mention, Lois seemed very interested in solving this problem.

Moving forward, Lois went down her list of ideas. At the bottom of the list in all caps were the words “CLUTTER” and “ORGANIZATION.” The capitalized letters showed us that this is a serious problem. Thus, we decided to ask her the most questions regarding the organization of her piles of papers. Her situation was that she has an issue throwing away papers, however, instead she throws them into massive stacks that sit in her and Irv’s office. Our original idea for a solution involved some sort of scanning device so that she never had to worry about physical paper clutter. She was intrigued by the idea, but ultimately feared a shift to strictly digital organization. This was largely due to the fact that she kept hard files that were very valuable to her. For instance, her fathers notes to her mother and her mother’s health documents. So we tried to get some more specifics about her papers. She then brought from her office a small sample of one of her massive piles of papers. At the table we each sifted through and she explained what value each document had. Right then and there she also decided that there was a handful that she could already throw out. Thus, we noticed that a decent percentage of the documents she has are ready to be put in the trash. A specific branch of the paper clutter was her sheet music. So we decided to brainstorm ways to organize that in a certain file cabinet kind of way. We showed her a past project that involved rewarding the user with candy upon placing a paper in a file. She was not a fan of this idea saying, “Oh, that’s dangerous.”

At this point, our interview had lasted over an hour, but we had no concrete plan. So, we decided to ask her if she could show us around her lovely home to get a sense for the clutter. She brought us through her den and into the TV room where she had cabinets filled with old sheet music and cassettes. The sheet music was noticeably scattered in multiple parts of the house, which led me to believe that this might be out of our scope. Not to mention, she was unsure how she possibly organize it all because she would never remember the names or composers or dates of the songs.

Briefly thereafter, we left her home and said goodbye thanking her for her time. She emphasized that she hoped she didn’t waste our time, and we assured her she hadn’t.

During the interview we were able to collect a lot of information about Lois’s lifestyle and daily activities. Unfortunately, the interview  was not as effective as we would have liked it to be.  This owes to the fact that we did not spend a lot of time discussing the project we settled on as we had not anticipated that it would be feasible. As discussed above, Lois mentioned that she wanted a device to regulate the volume on her TV during commercial breaks. At the time, we were convinced that this would not be possible as it was both too complex and software heavy. Fortunately, after researching we realized that we could implement a volume regulator with a physical component. It would use a sound detector and IR transmitter to remotely control the TV. We found many projects which achieve this and we are currently brainstorming what additional features we could add that would be beneficial specifically for Lois and Irving.

We may have to make another visit to Lois’s house to have a closer look at her TV and overall setup of her den. A lot of details remain unknown , for example, where would we place the device in the room? If we were to place it near their couch is there an accessible power source? Would we need to have a higher minimum threshold to account for Irving’s hearing?  Where is the IR receiver on Lois’ TV? 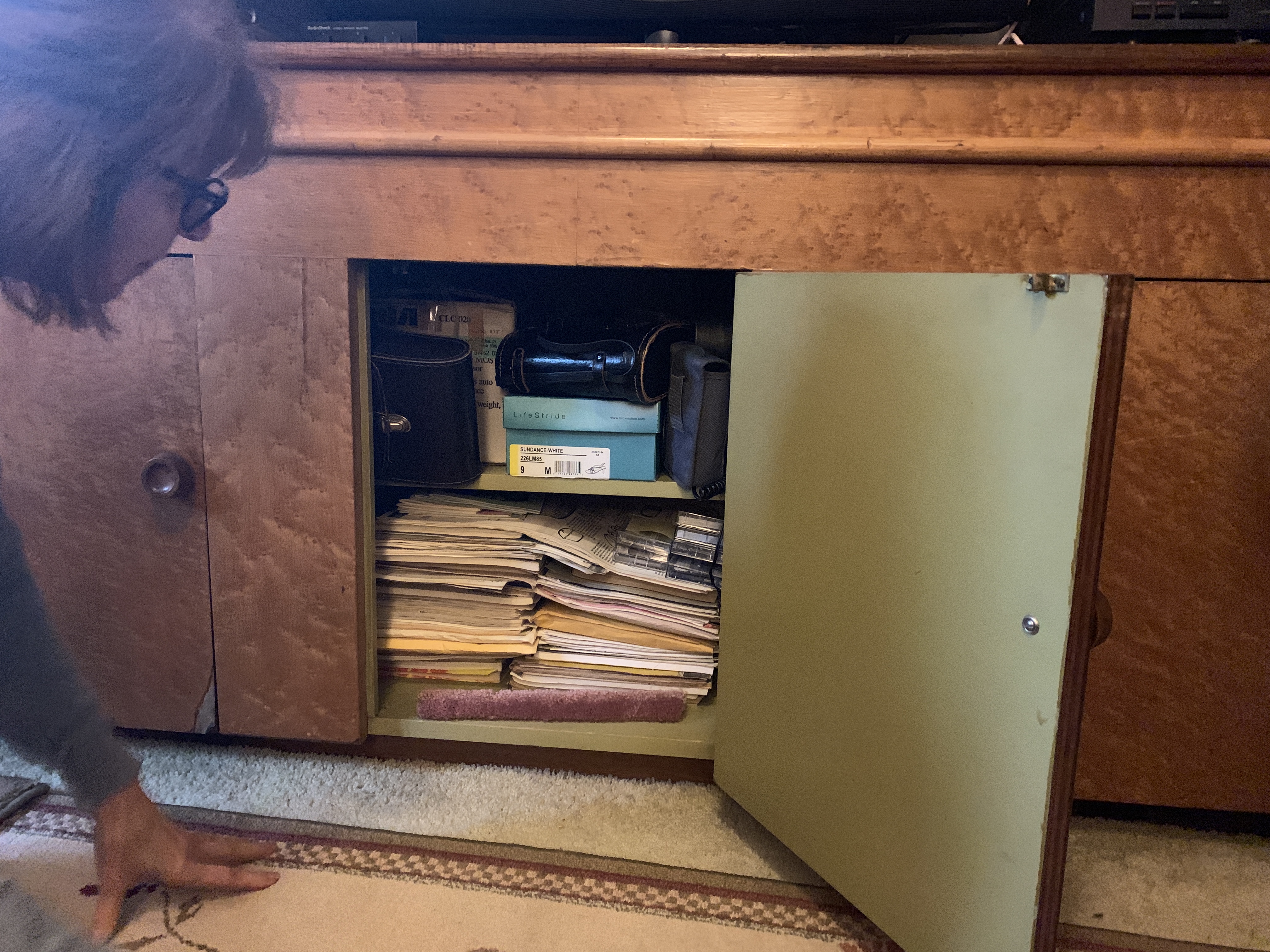 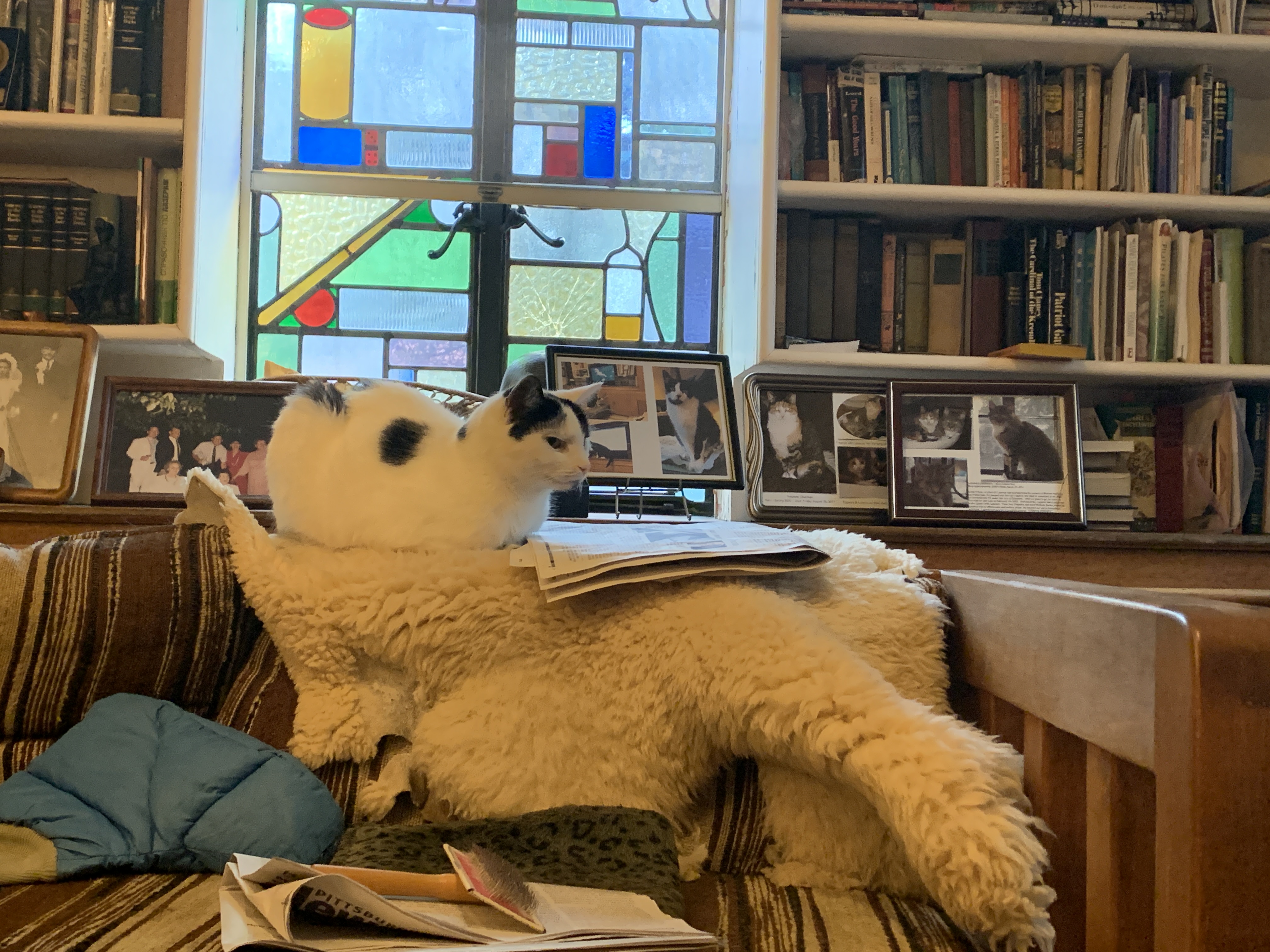 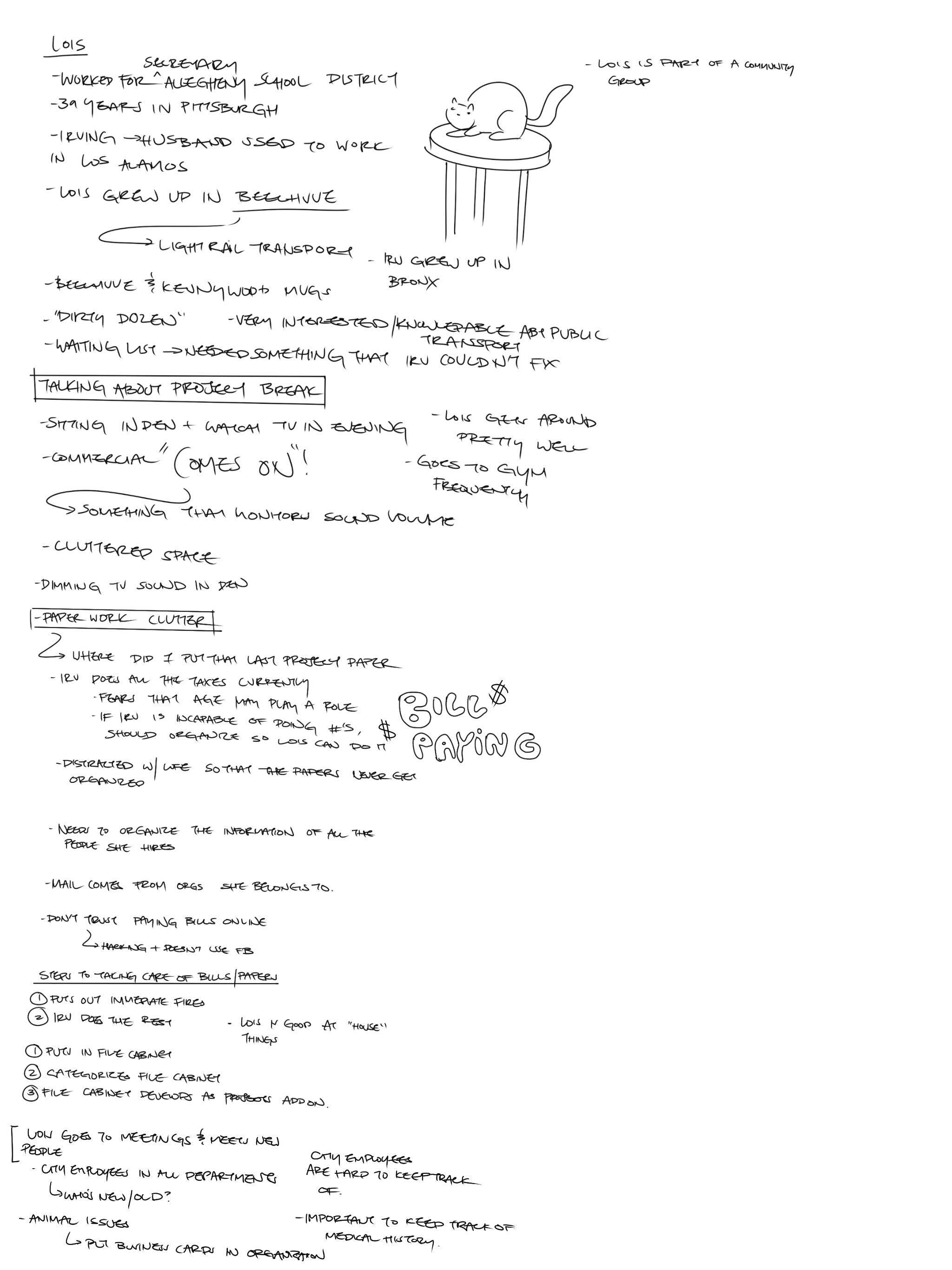 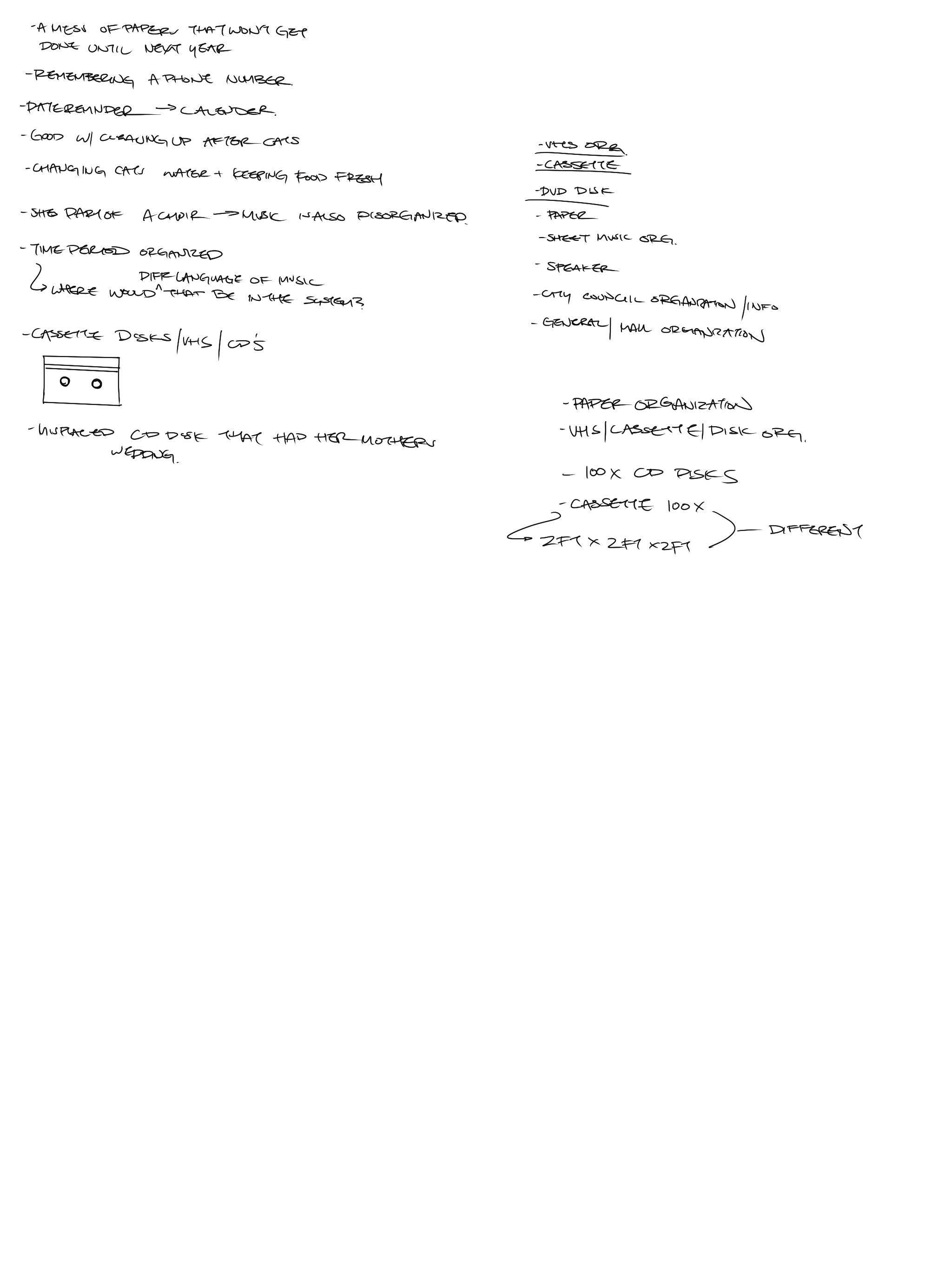