Due at the start of class on Wednesday, Jan. 22nd

Get excited for some thrilling LED blinking!

This Serial stuff may be new to you, but worry not—there’s a tutorial section towards the bottom of this page.

(Just to state the obvious: you should change all the particulars of that comment block to be true and correct to your homework.)

The filename you submit should be in the format andrewID-hw2.ino. (ino is the extension for Arduino files; you don’t need to add it manually to the end of an Arduino file name.)

⚠ For those of you new to electronics ⚠

There is one big wiring mistake that people sometimes make when they’re first learning this material.

Do not connect the power (which means 5V, or any other Arduino pin that is an OUTPUT) directly to ground.

In other words, no wire should directly go from 5V to GND. If you make this mistake, you may destroy the Arduino (which is a $10 loss, and not the end of the world). It is also possible to harm the computer connected to the Arduino! That can get a bit more expensive.

If at any point the Arduino or any wires attached to it become warm/hot, immediately unplug the Arduino from your computer. Check your wiring—you probably have connected power to ground somewhere.

How do I use a breadboard?

The good people at SparkFun (an education-market-focused electronics supplier) have a nice tutorial https://learn.sparkfun.com/tutorials/how-to-use-a-breadboard/ which covers what we talked about in class plus some extra history which is interesting.

Wiring a single LED up

In class we drew a schematic representing how to power a single LED from the Arduino which looked something like this: 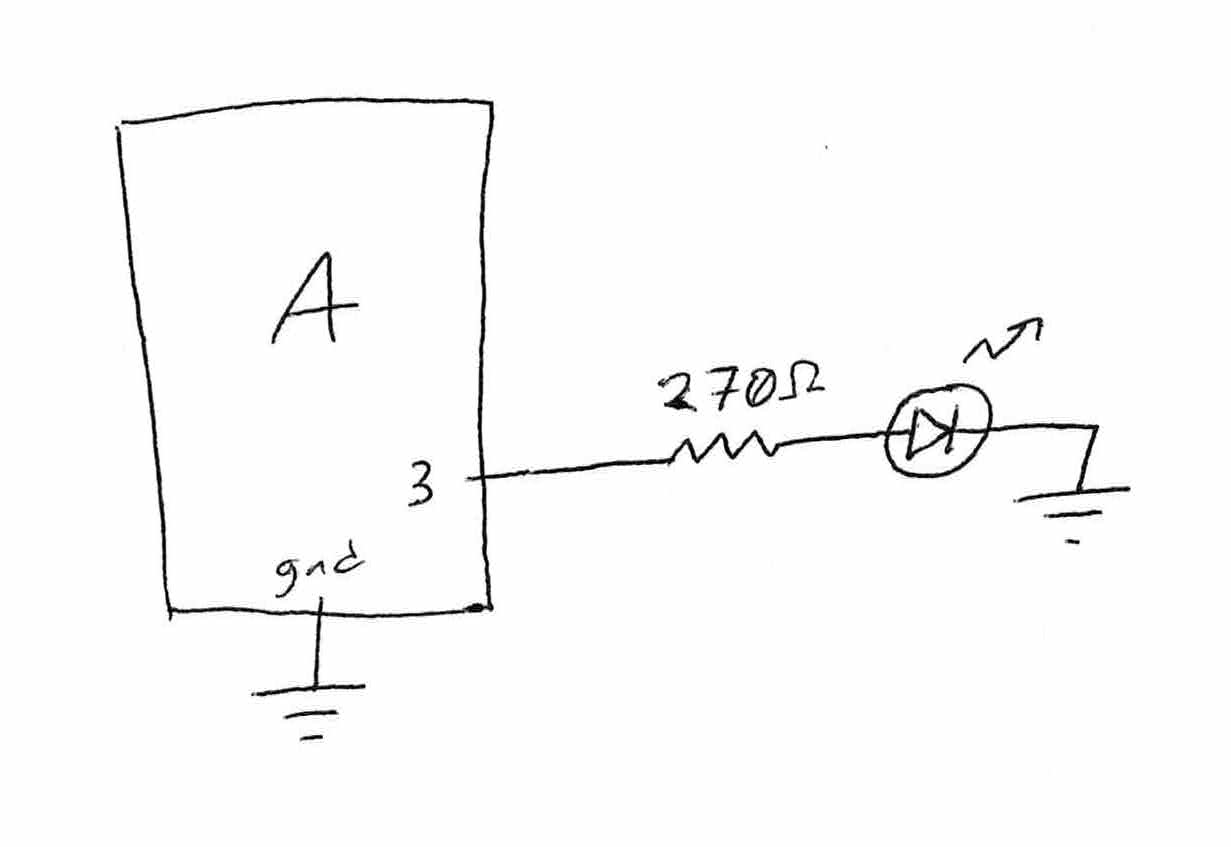 If the circuit you make matches the drawing, to get the LED to light up, we simply need to tell the Arduino to “turn on” power on pin 3. This can be accomplished thusly: digitalWrite(3, HIGH);. (You can probably guess how to turn off that LED in code.)

Perhaps you’re not sure how to go about actually wiring the circuit up, though. Below, we’re going to keep referring back to the schematic, and relating each part of it to the wiring in the real world. By going systematically through the schematic, we’ll be assured of translating it into a viable and correct circuit in the world.

Choosing a different pin for driving an LED is straightforward: instead of digitalWrite(3, HIGH); you simply digitalWrite(x, HIGH); where x is your pin number of choice. Remember that each of the pins you use will need to have their pin mode set using the pinMode() command.

The walkthrough below uses pin 3 for the LED, but any digital I/O pin(s) on the Arduino will work. (Caveat: it’s best to avoid pins 0 and 1, since wiring things to those will often interfere with the Arduino’s communication with the computer.)

1. Connect Arduino pin 3 to one side of the 270Ω resistor 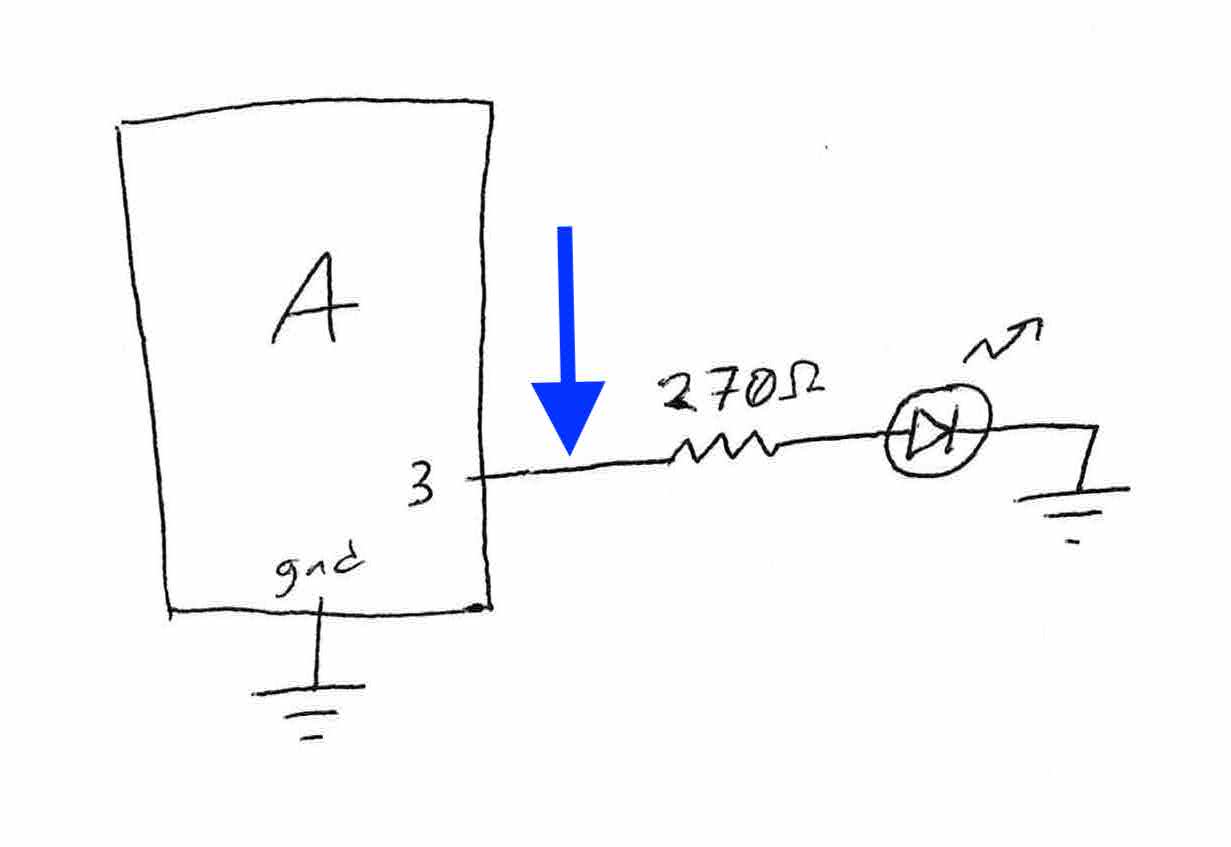 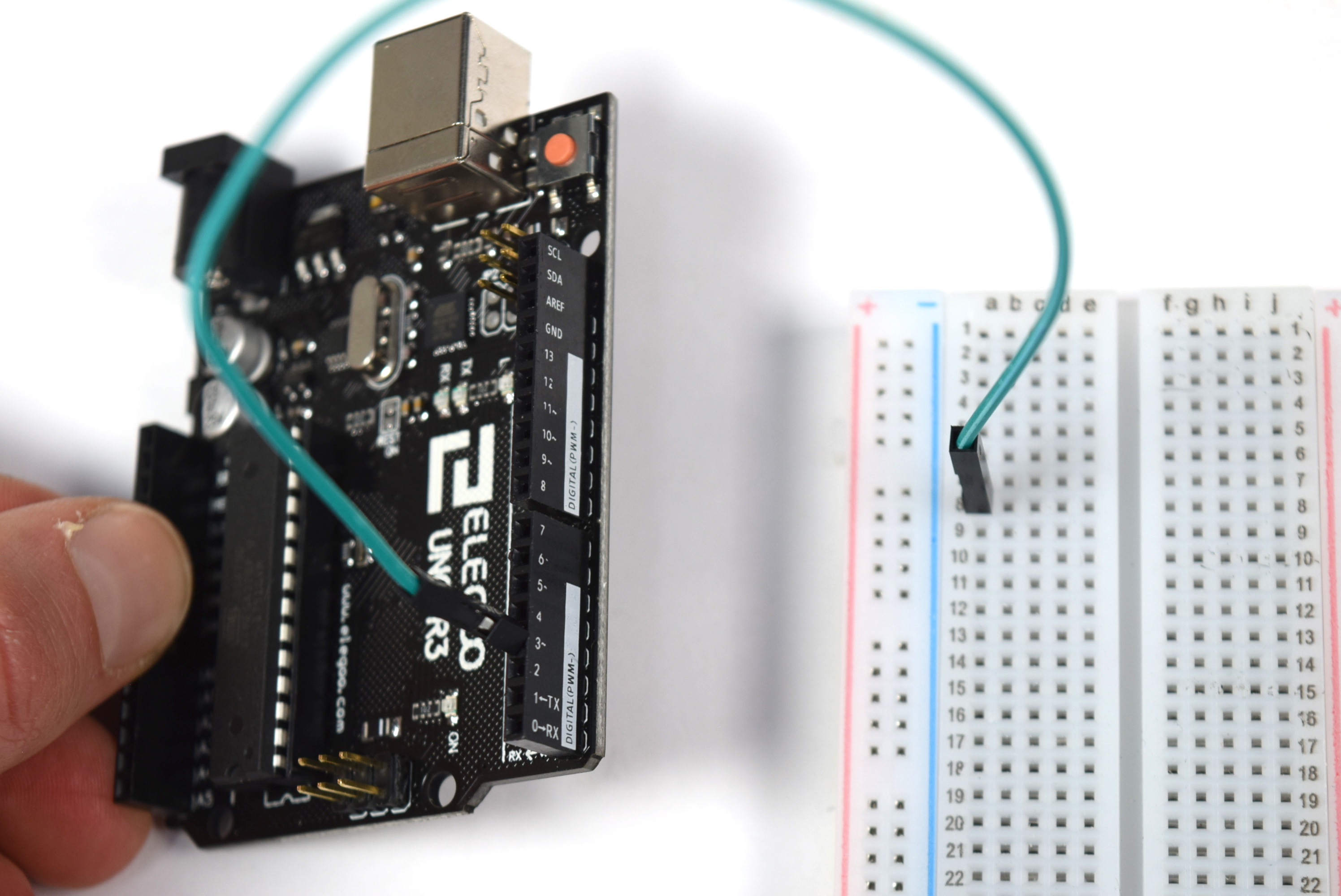 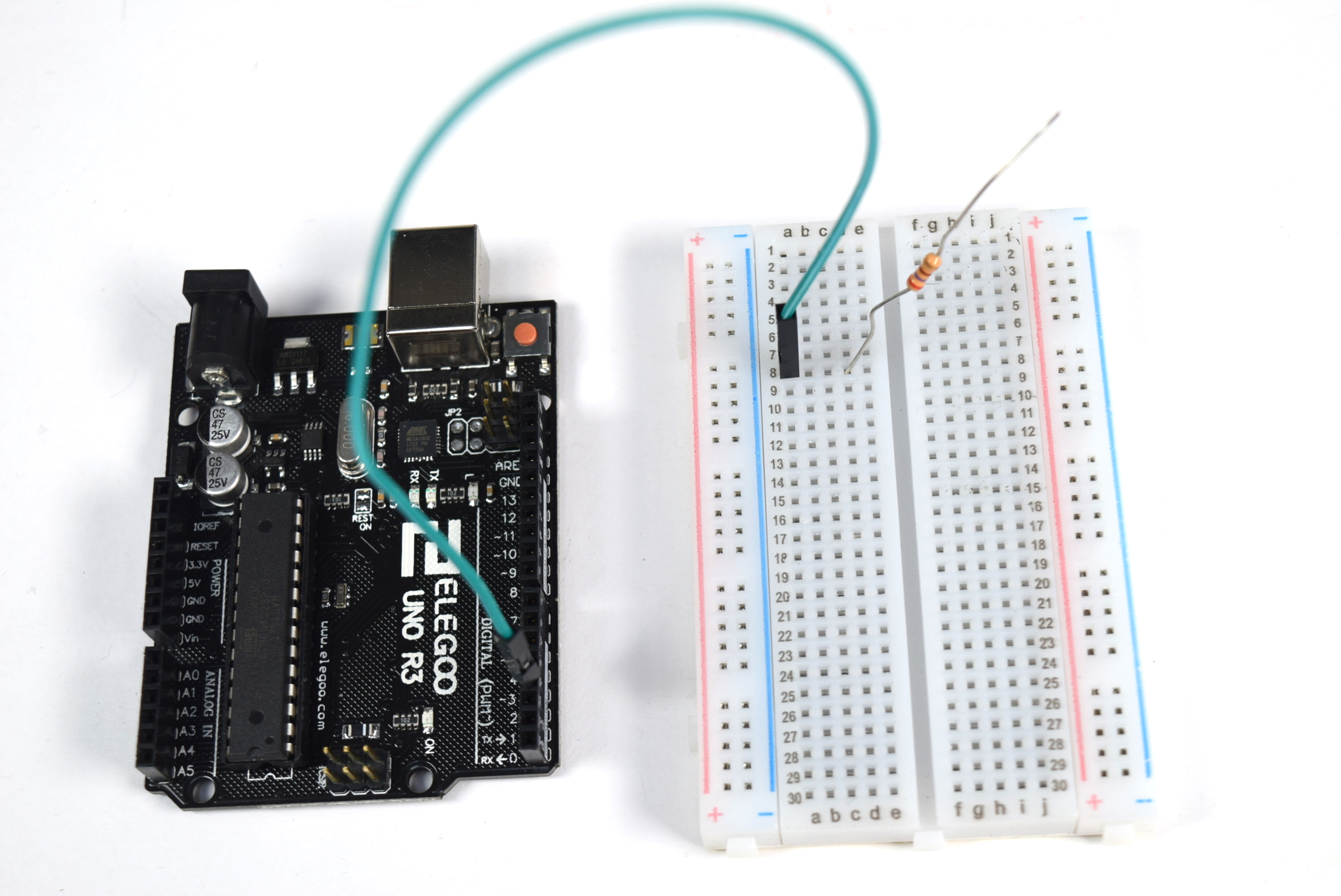 Q: What color wire should I use? The Arduino does not know or care what color wires you’re using. However, you will help yourself greatly by choosing good colors; in this example, matching the wire color to the LED color will help keep things clear.

Q: Why use row 8 on the breadboard? No reason at all; this is totally arbitrary. The Arduino has no idea what row it’s plugged in to and doesn’t care about the number. It knows its own pin numbers (i.e. pin 3 in this case), but doesn’t have any way of knowing what external wiring you’ve done.

Q: Which side of the resistor should I attach to the Arduino connection, and which side to the LED connection? In the case of a resistor, which does not have “polarity,” it doesn’t matter. Either direction will work the same.

2. Connect the other side of the resistor to the positive leg of the LED 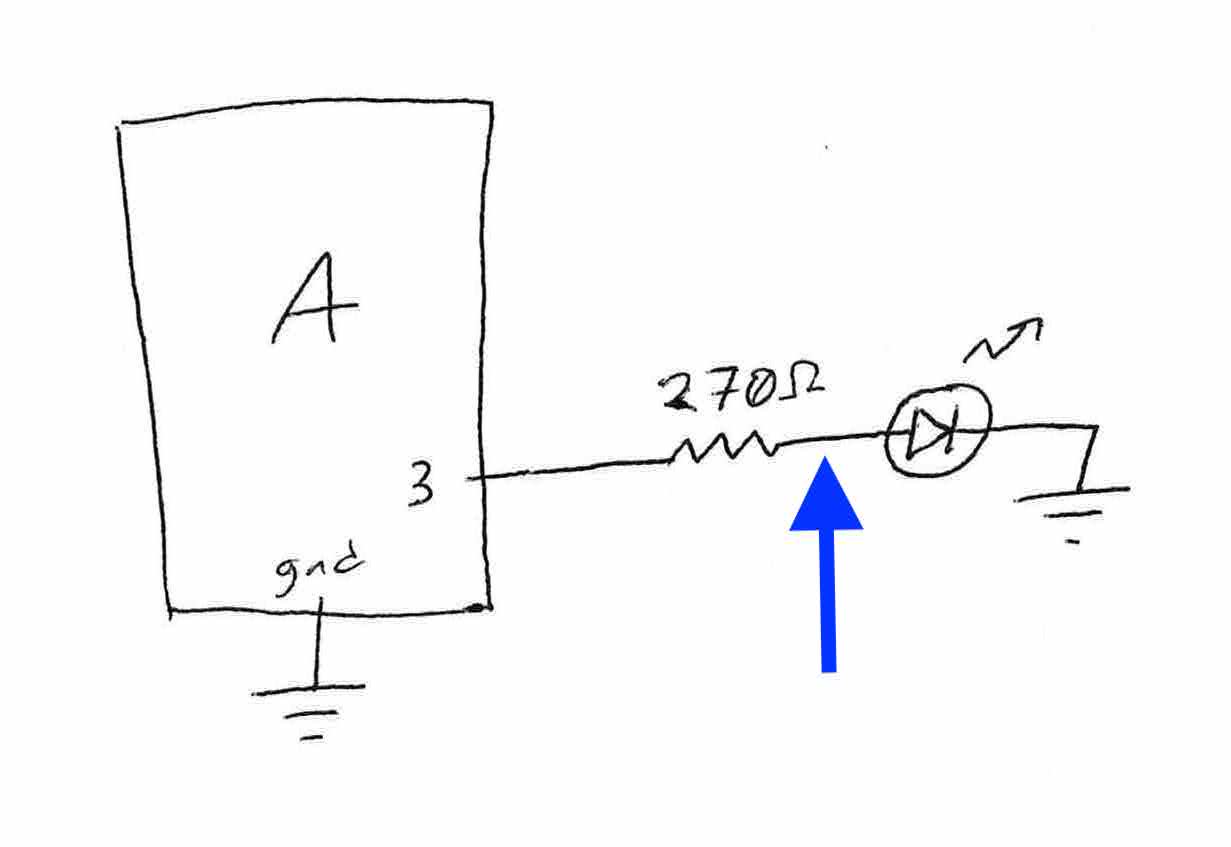 Where will we make this connection, between the “other” leg of the resistor and the LED? Anywhere we want. We can hop over the center divider to the other side of the breadboard, or keep using only the left side of the breadboard; it’s a question of style rather than substantive difference. 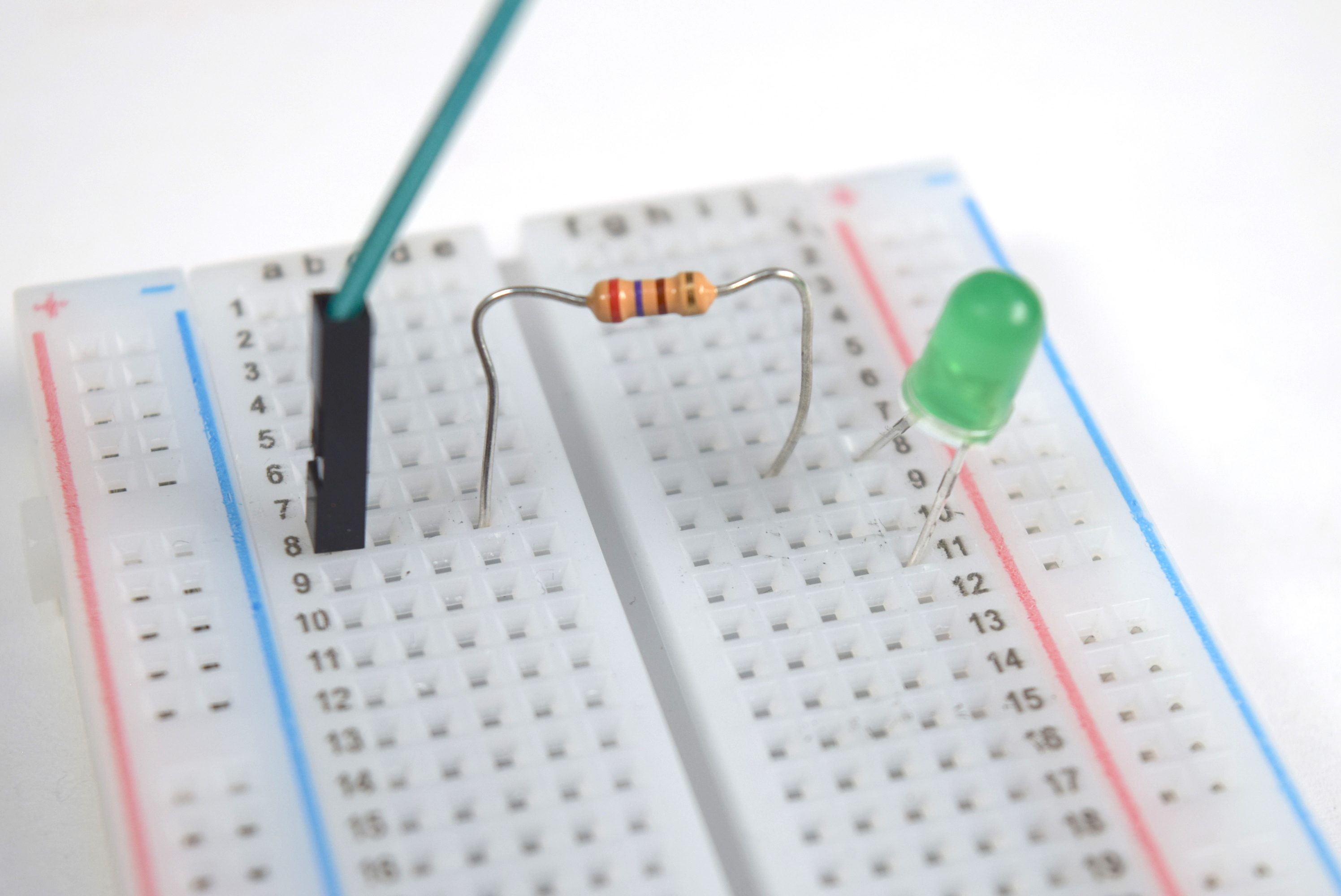 Q: Which LED leg is which? The LED, unlike a resistor, does have polarity. In order for power to flow through it (and for it to light up), the power should go into the longer leg, and then out of the shorter leg. Wiring the LED backwards will not harm it; it simply won’t light up because power won’t flow through it. 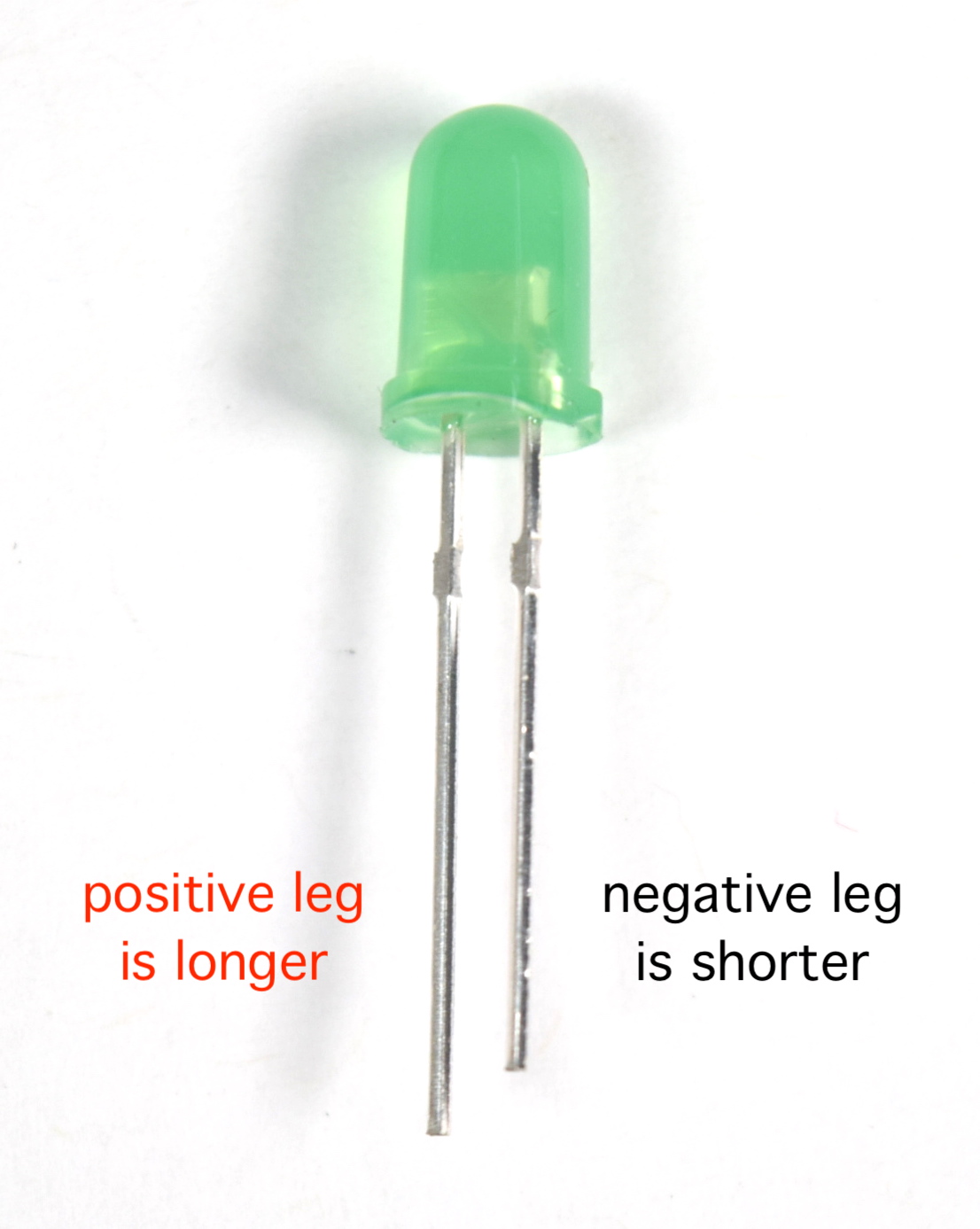 3. Connect the negative leg of the LED back to the ground

Finally we make the last connection, from the negative leg of the LED to the Arduino’s ground, via the breadboard’s “power rails,” which are the columns running up the right and left sides of the board marked with + and –. (In our context, the – minus sign means the same thing as ground.) 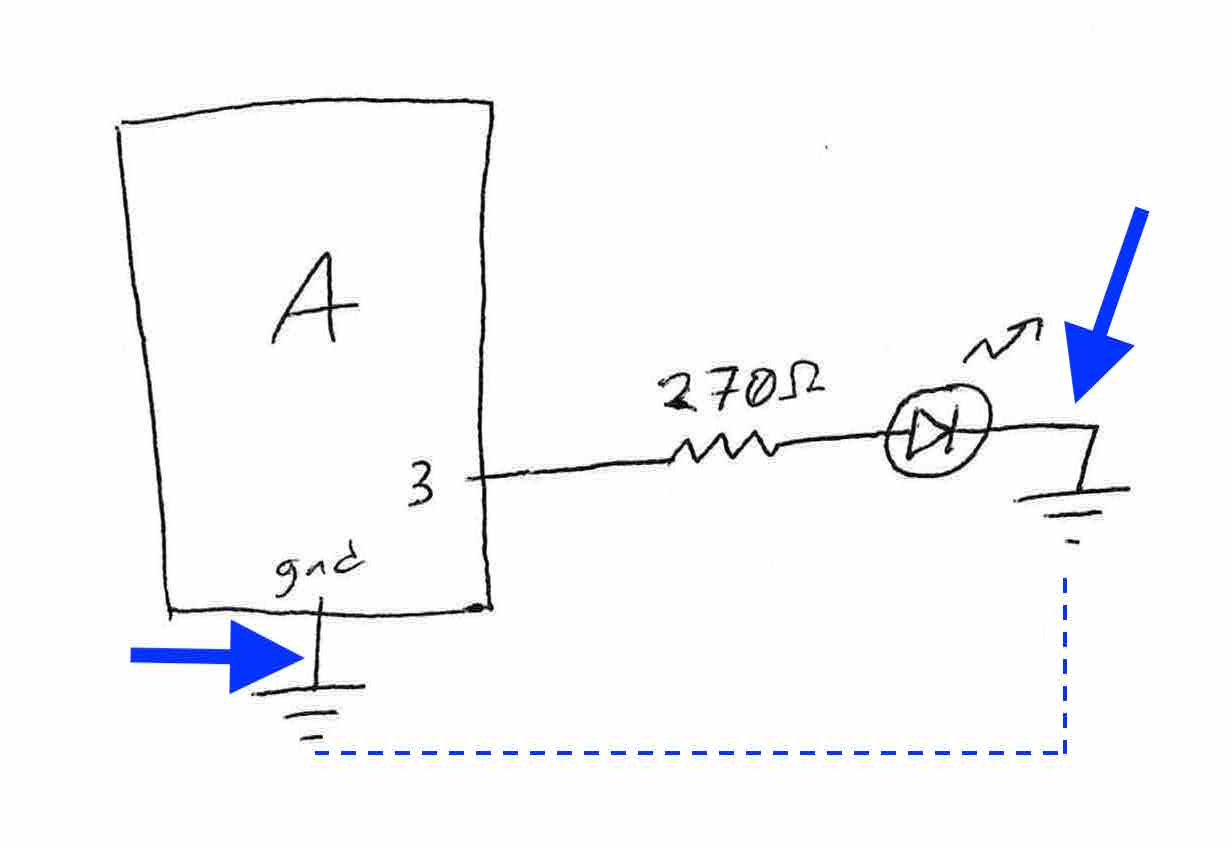 The blue dotted line shown above should not actually be drawn in the schematic; it’s just shown here to illustrate clearly that all of the ⏚ ground symbols are understood to be electrically connected—in this case, via the power rail on the breadboard.

It’s best to use black wires for any connections to ground; that’s just the color convention. Good color choices are very helpful when you’re trying to debug a complex circuit with lots of wires. 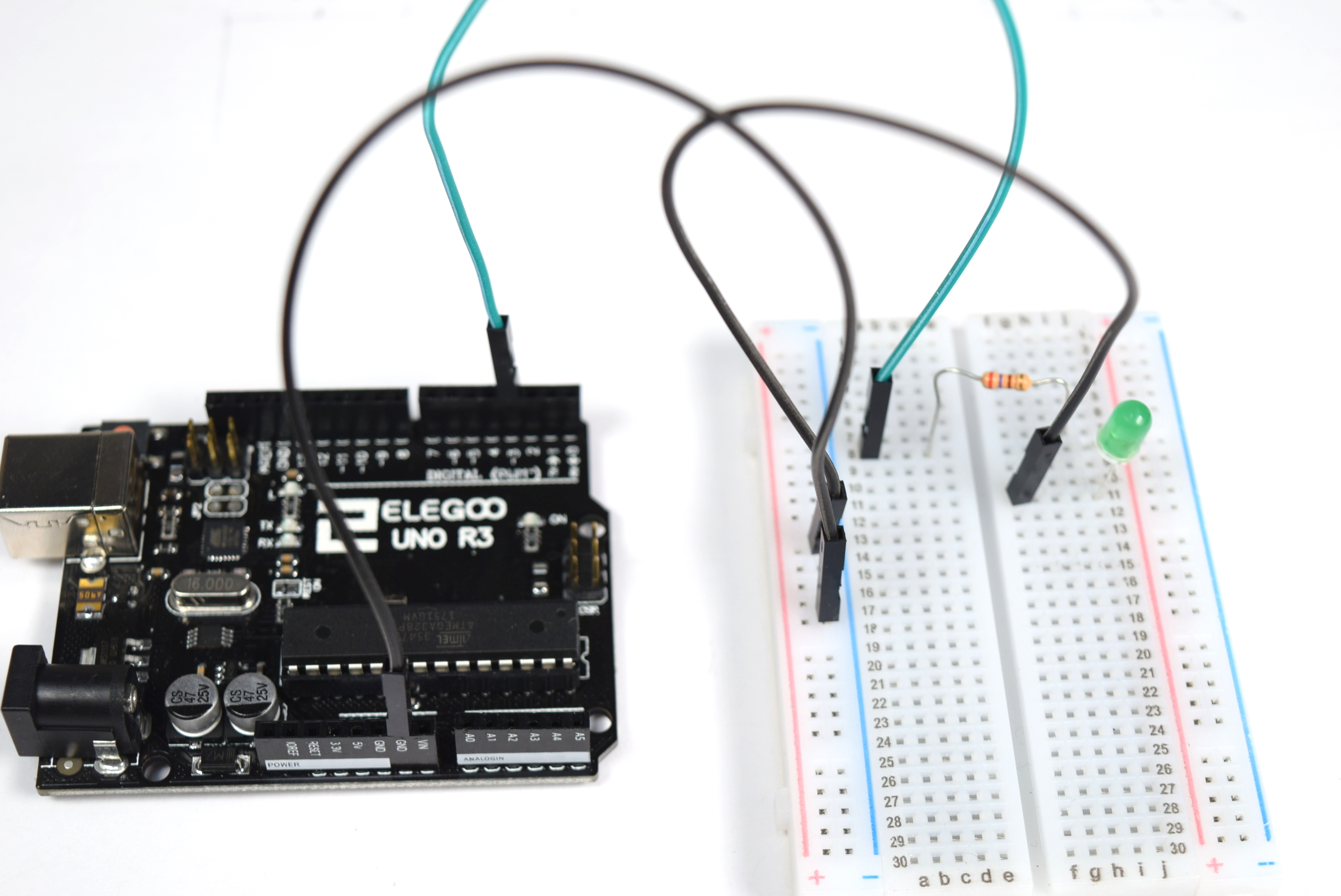 Once you’ve got one LED wired properly, it won’t be difficult to add more of them.

Each output LED should be driven by its own Arduino pin, have its own resistor, and have its own connection to ground.

So far in this tutorial, we’ve wired a green LED to pin 3, so if you’re going to add a red LED, you can drive that LED off of any other digital Arduino pin you like (avoiding pins 0 and 1 as mentioned above).

Q: My LEDs are all working, but they’re very dim. My wiring looks fine. What’s wrong? Make sure you used the correct pinMode() command for all of the outputs you’re using.

We’re going to learn a new trick, something we didn’t have time to get to in class, to do part 2 of the homework.

It is possible to tell the Arduino to communicate something back to the computer as it is running. We do this using a feature called “serial communication,” and once you get the hang of it, you’ll find it very useful.

Here’s how you implement serial communication:

1) Tell the Arduino to turn on its serial port. How? With the command Serial.begin(9600);. Since you only need to do this once, the usual practice is to put it somewhere inside of the setup, like so:

Of course your setup can contain as many instructions as you’d like; for instance, it could look like:

3) To see the serial messages that the Arduino is transmitting to the computer, click on the little magnifying glass in the upper right corner of the Arduino code window:

A window called the “serial monitor” will open up and display your messages. If it’s working properly, it’ll look like this: 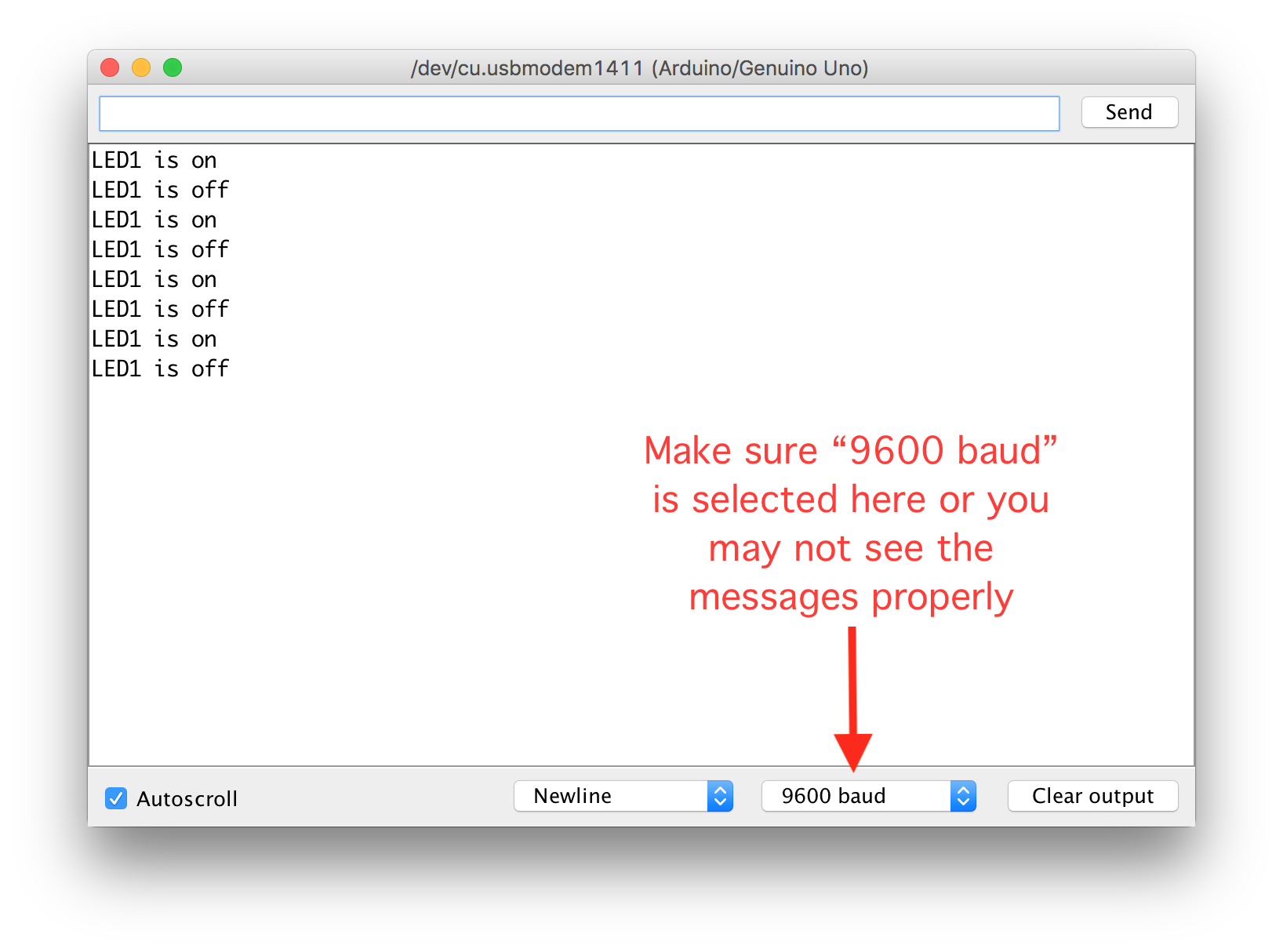 Remember, if you want to restart your Arduino, you can always push the little red “reset” button that’s above the USB connector on the board. Also, you’ll discover that every time you open the serial monitor window it will restart automatically. (Restarting takes less than a second so this is no big deal.)

You are welcome to collaborate with your classmates, friends, etc., on this homework assignment. Look up help in any source that you find useful, including the web, reference books, whatever you’d like to use.

Questions? Concerns? Email the instructor or TA and ask! We’re here to help.