Our team focused on a particular style of Chinese martial arts called baguazhang. This technique utilizes a double-handled curved sword and dynamic movements that engage the whole body in smooth coiling and rotation. The user steps in a circular motion to build up momentum to fluidly move around an opponent and strike quickly with the sword. 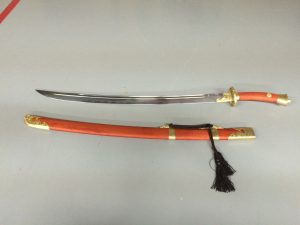 We would have loved to use skeletal tracking to record the movements of Chris’s limbs in relation to the sword, but given the time and technological constraints we decided to track only the sword’s movements. Motion tracking was a challenge given the time constraints that we had with Chris. Also, fabricating a device that would attach to the sword without slipping off or weighing down the blade was a challenge. While we originally had a more structurally sound device that would clamp onto the sword blade, we were concerned that it would be too heavy. Therefore, we rapidly prototyped an array of acrylic cutouts that adjusted to the width of the blade to be slipped onto the sword. The blade was also a reflective surface, which made recording its movements with the motion capture devices difficult.

We used Grasshopper to analyze the physical forces and rotation in our recording as well as visually represent it. Because our recording was not zeroed, we had to add correctional vectors to ensure that the data was upright. Additionally, we attempted to find the centers of rotation in the data and discovered that the center was dynamic. We were unsure of its location as it kept moving, yet this provided valuable insight to how Chris was able to create ribbon-like movements in his demonstration.

Our data also maps the instantaneous velocity of the sword with color–blue indicates a slow velocity, yellow indicates medium, and red indicates fast. This shows the patterns of momentum built up over time for the sword to be swung in a fluid motion. 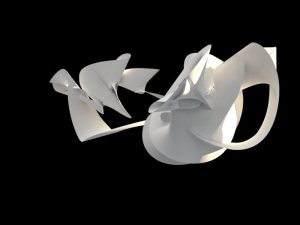 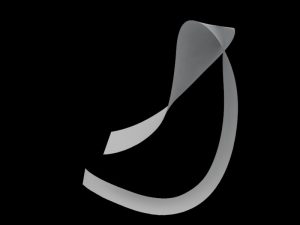 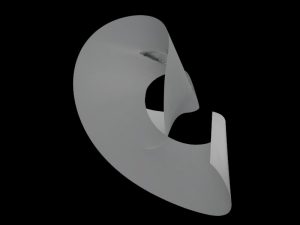 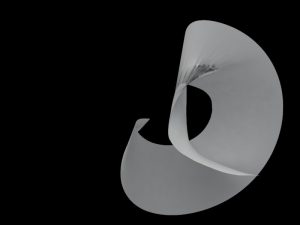 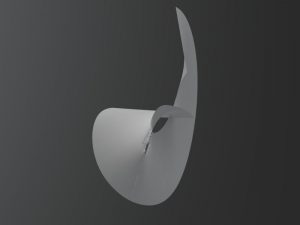 These surfaces were rendered in Rhino using V-Ray. They illustrate the movements of the sword in space as shown from the data that we had recorded.

While there were many flaws in our process, we were able to accurately depict the sharp and fluid motions of baguazhang through sculpture and video. Rotation and velocity were important to our understanding of how these movements came together.

Special thanks to Chris Young for demonstrating baguazhang sword movements for us!