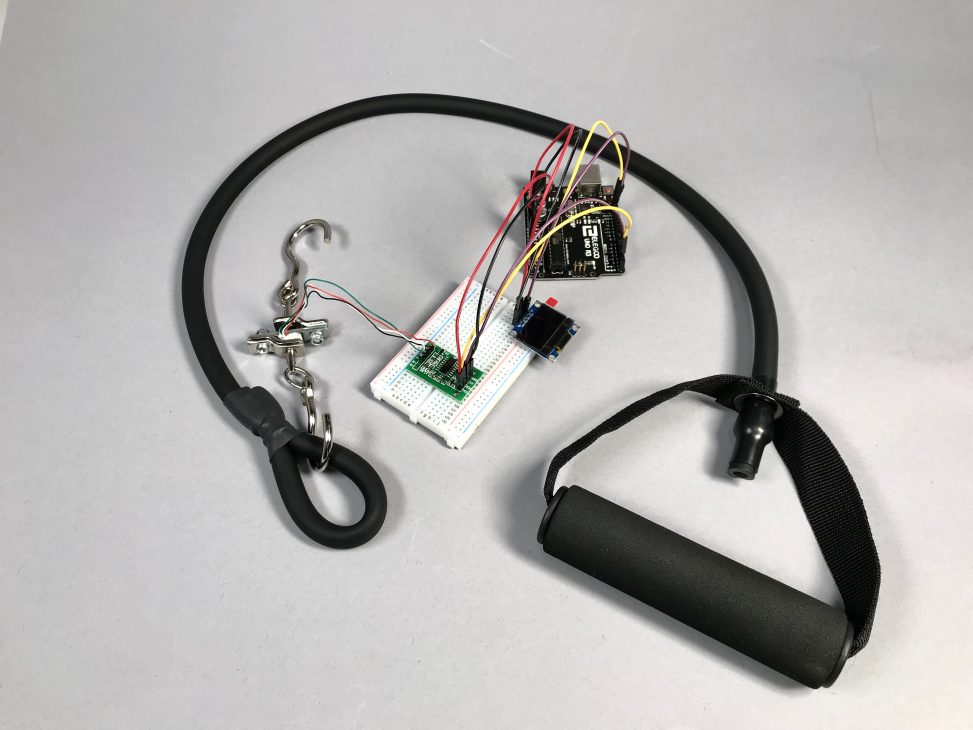 A few weeks ago we interviewed Gary, documented in a previous post, to understand his daily life and what type of device he may have a need for. Since our conversation, we have worked on developing a fitness device that measures differences in strength between two sides of the body. This post documents our process in developing this prototype, as well as the feedback we received on it from Gary.

This device gives the user a way to quantify the strength with which they complete exercises with a resistance band. 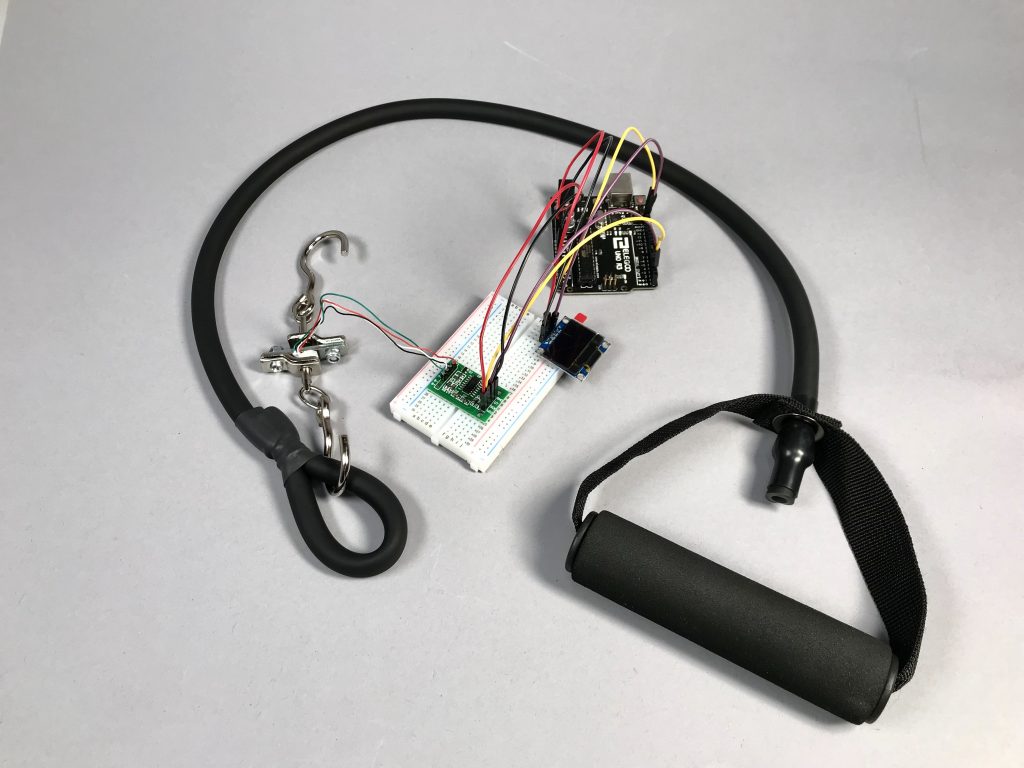 Overall photo of works-mostly-like prototype. The modified resistance band connected to the load cell, and the OLED display where output is shown. 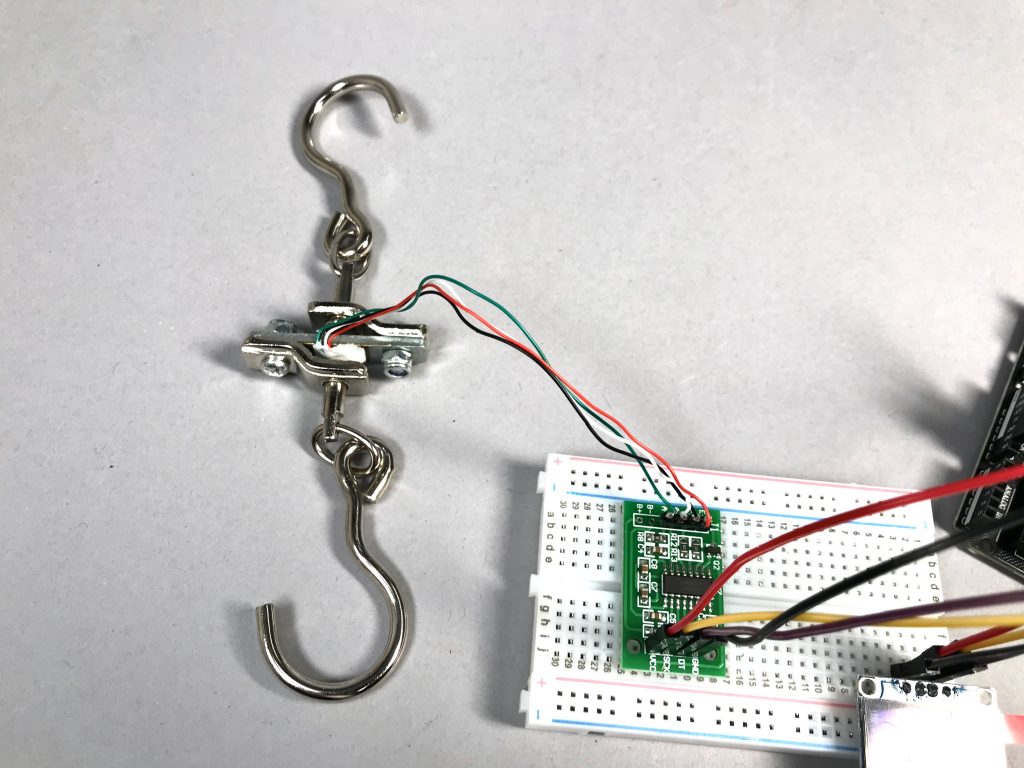 The load cell sensor with two hooks attached, wired to the amplifier board that sends values to the Arduino. This is our method of data collection. 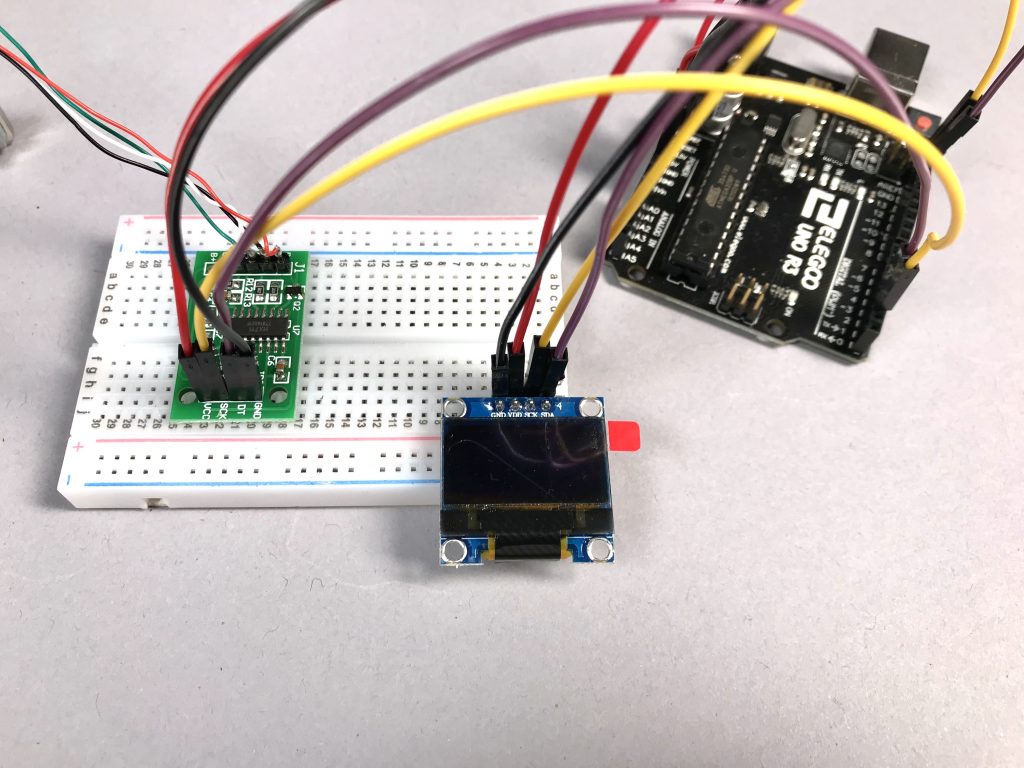 We decided on an OLED display over an LCD display, for a more compact and lightweight user interface.

The prototype is straightforward to use and interact with. One should begin by attaching one of the hooks to a fixed point, such as under a door or weight bench, and attaching the other to the resistance band. Once the user turns on the device, and the screen prompts them to “Begin”, they have 10 seconds to complete repetitions of the exercise they are doing. (This length of time was chosen arbitrarily, but upon further consideration we aim to make this controlled by the user in our final product). Then, once time is up, the screen displays the maximum force exerted during that time, and there is a pause for the user to change the side they are exercising. The user can continue this process, and thus gain a quantified understanding of the difference between their two sides or between multiple repetitions. 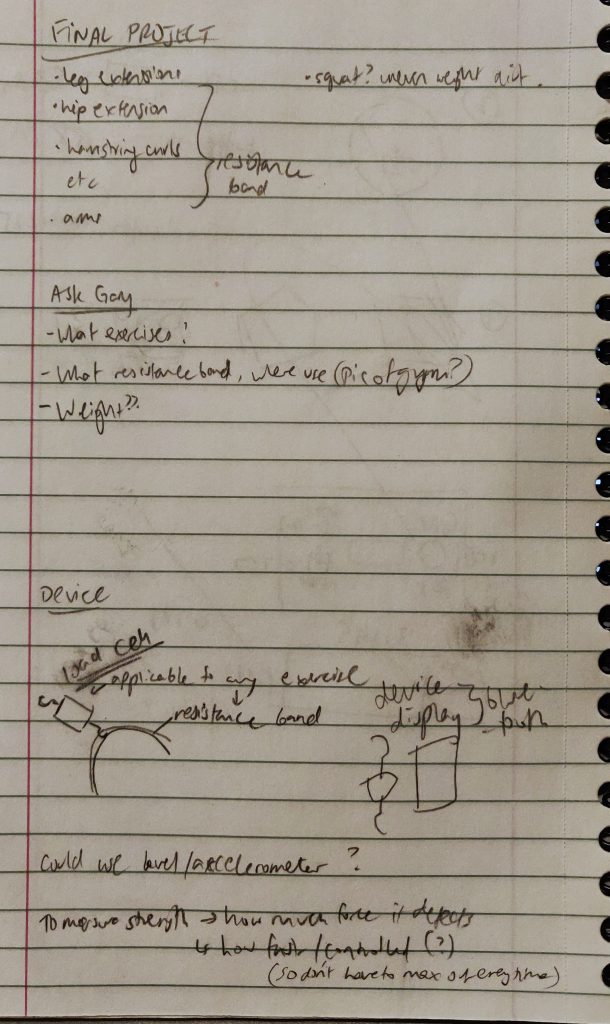 Notes made after meeting with Gary, sketches of initial ideas and possible features of the device we envisioned. 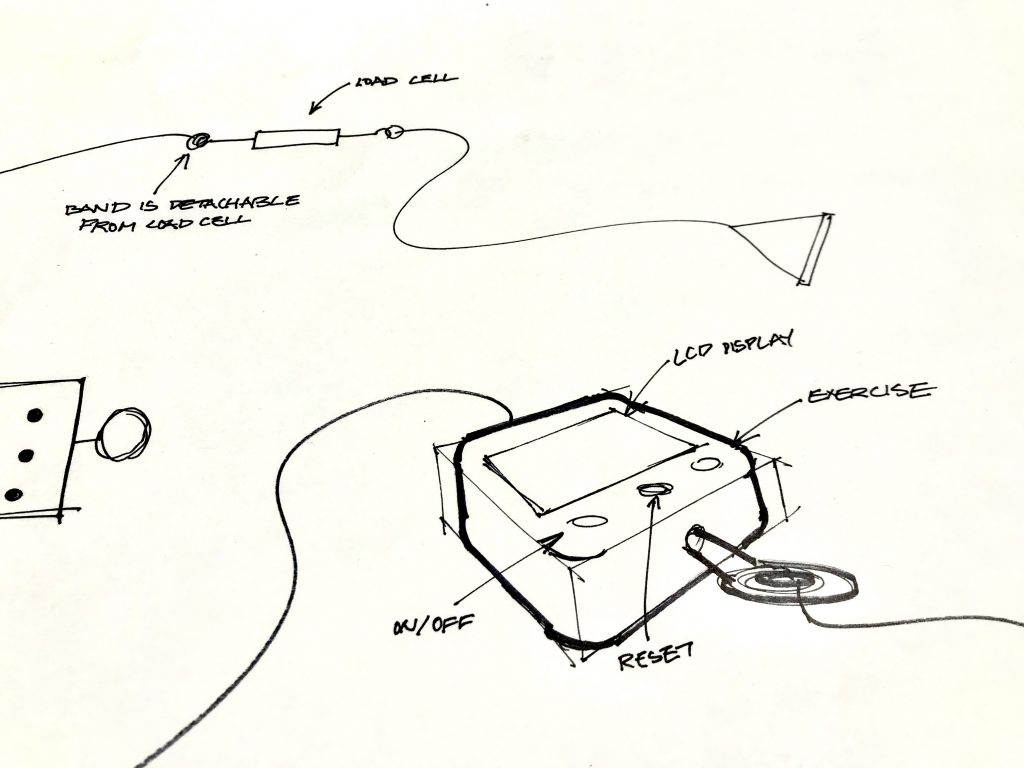 Early sketch of a possible physical form for the device, with possible functions for buttons and idea for attaching resistance band to load cell. We later decided to connect the load cell directly to the device, however. 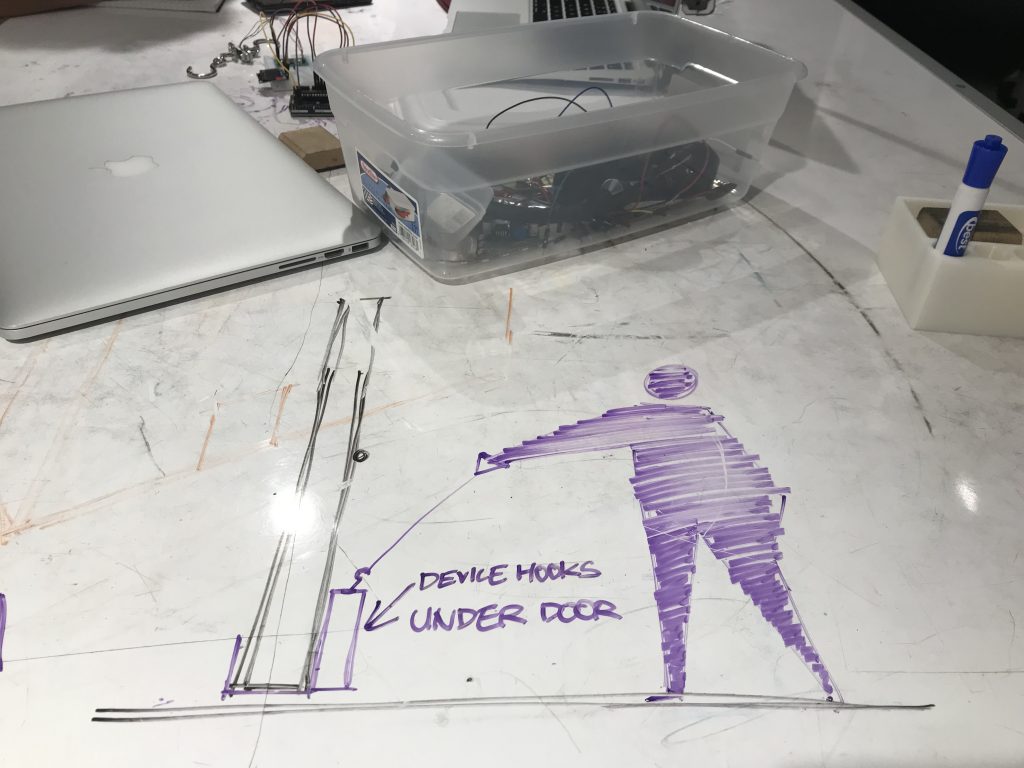 A more contextualized sketch of how our device can be adapted for Gary’s needs. The load cell can be anchored either in his home gym setup or attached to doors for travel and versatility.

We cut a resistance band in half and shaped it into a loop, so that the load cell could hook onto it easily. Used heat shrink to secure the loop. 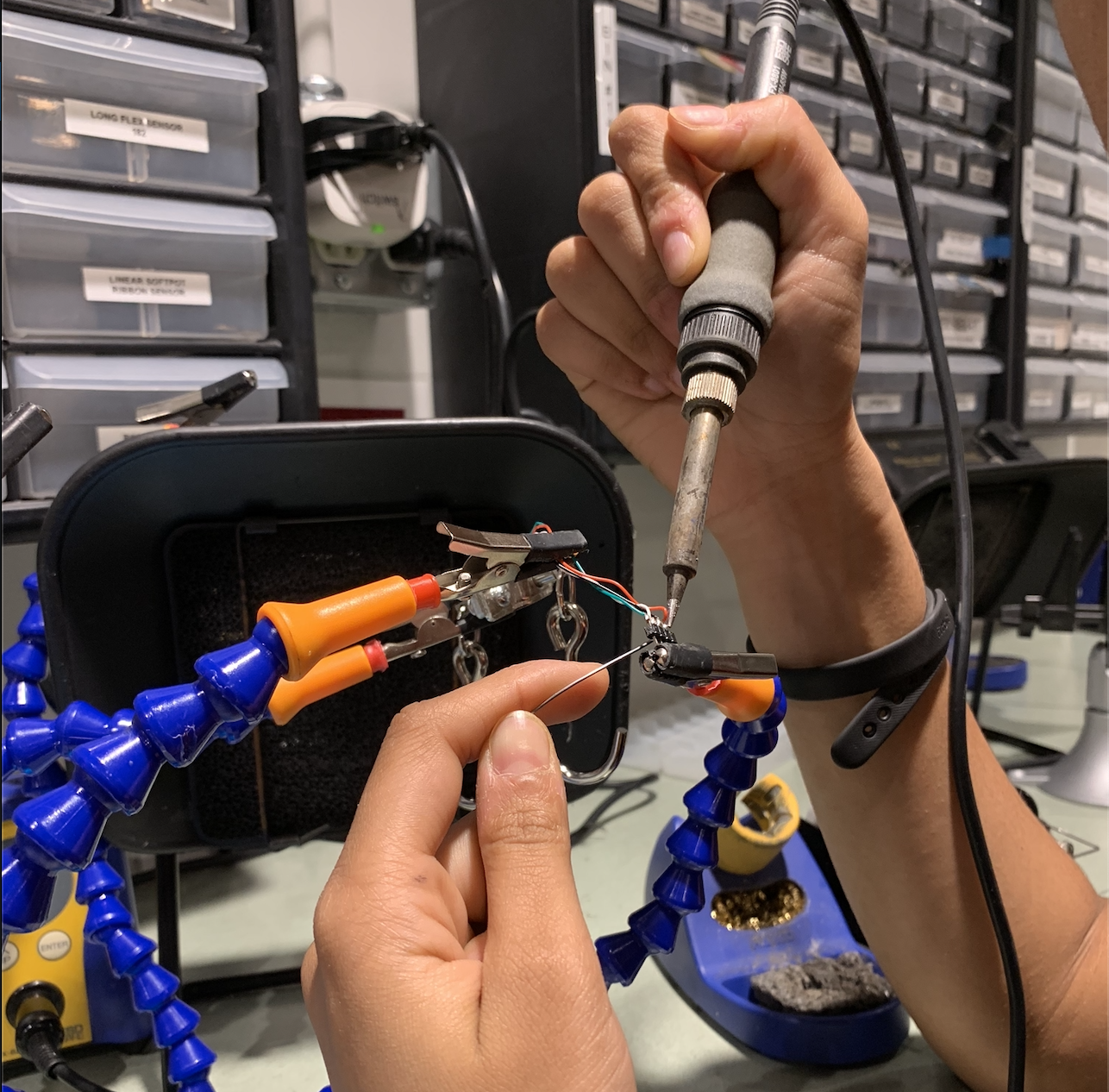 We soldered the load cell to the male headers, which eventually be connected to the load cell amplifier. The wires were extremely thin and prone to breaking, so the soldering had to be durable. 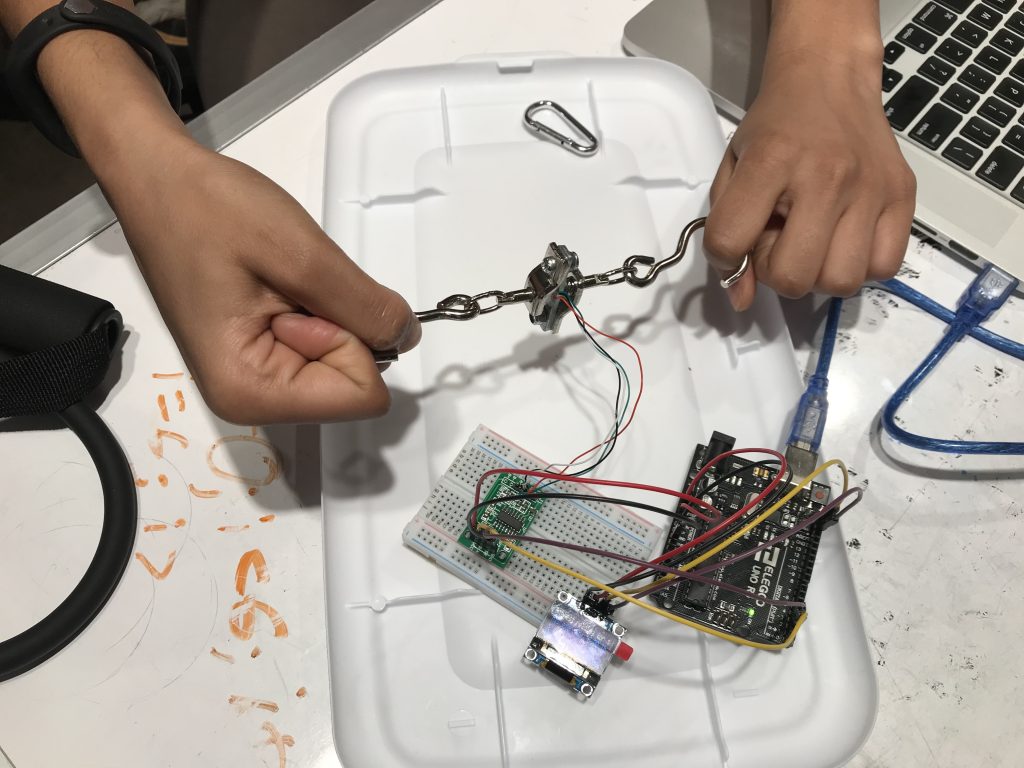 Testing the load cell, how different calibration values affect output. Our readings were initially precise and seemingly accurate, but were more unreliable the next time we used it. This was due to bad soldering and connections; once resoldered, the readings made more sense. 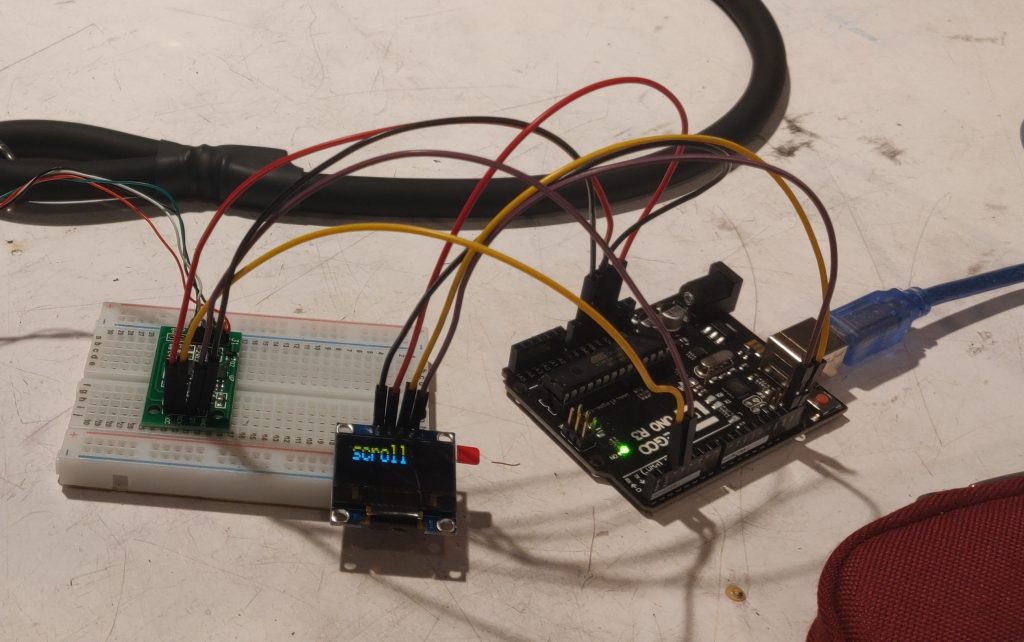 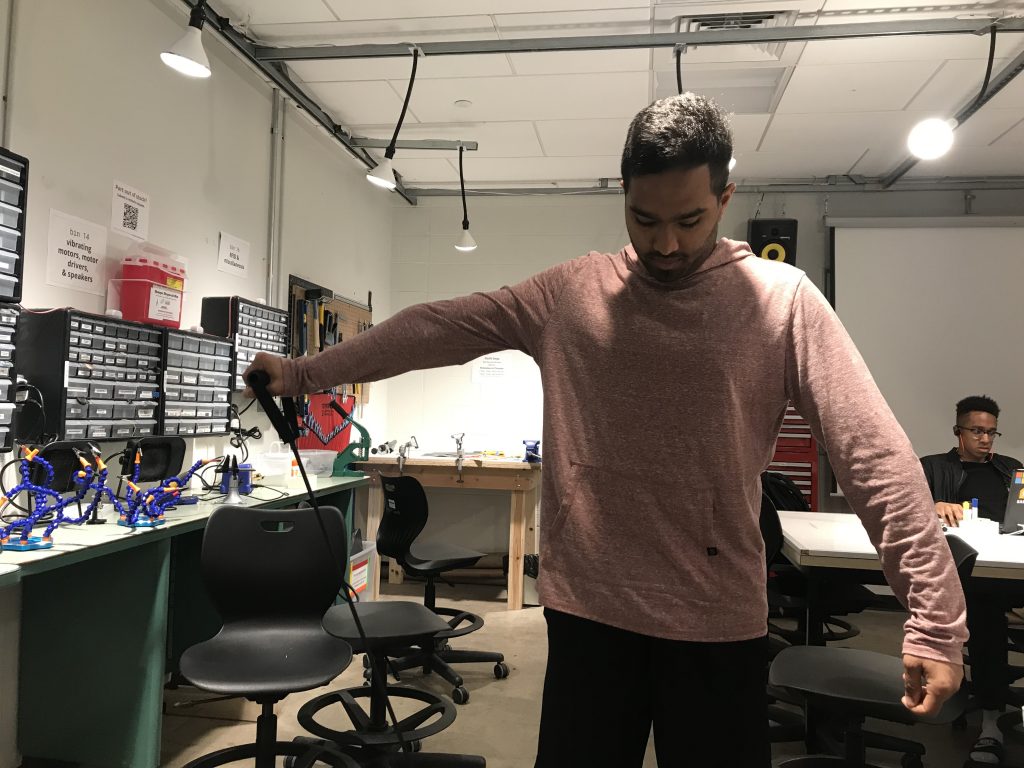 Acting out a use of the prototype by hooking the load cell underneath the table. It worked, so we decided to try and make sure the physical device could be adaptable to different surroundings.

Since Gary wasn’t able to make it to our prototype critique session, we sent him our progress over email. Soon after receiving this email, we were able to speak with Gary over FaceTime in order to show him more in depth progress and get great feedback as to what next steps to take.

Design and hardware implementation were our primary challenges. As we began designing, we had to figure out exactly how we would anchor our project in Gary’s home and how we could achieve multiple ranges of motion with a single device. We also recognized the challenge of housing the device to be both compact and extremely durable. Finding a load cell that was the right size, could be positioned in all 3 dimensions, and could be easily interfaced with was a challenge as well. We eventually found a cell that integrated well with our Arduino, but the wires connected to the actual sensor were uncomfortably thin and prone to breaking, especially because testing required the load cell to be moved and stressed constantly.

Gary wasn’t able to make it to the crit on Monday due to a family trip to Tokyo, but we had an audio call the day after to discuss our progress. He had some questions for us regarding the use of our prototype from the pictures we sent him, but he expressed strong support for the direction we were heading in. He liked the use of a resistance band instead of an unyielding, fixed rope and the way that this allows for 3 dimensions of movement.

One idea Gary gave us that helped clarify our future plans was the distinction he made between maximum and fatigue exercises. He wants to be able to tell the maximum amount of weight he can lift with both sides of his body as well as the amount of repetitions he can do until fatigue, while our current code only tells the user the maximum force. We recognize detecting fatigue in exercise sets to mostly be a software issue, which can perhaps be addressed by taking the average force reading over multiple repetitions of the exercise. Other than this, however, Gary just reiterated that he liked our ideas; we didn’t receive any negative feedback or ideas to prod us in a different direction.

Moving forward, we have decided how we’d like the interactions between the user and the device to work, in terms of buttons and their functions on the device. Gary expressed interest in being able to quantify the strength of his weak side against that of his strong side, so we plan to include more data on the screen between sets of exercises (such as average readings, maximum readings, the readings as a percentage of past readings, etc.)

We plan to implement these ideas in significantly more detail in the next week, as well as figure out which materials and design we need to guarantee durability of our device. Once we have a more complete user interface, including buttons and the screen displaying more relevant data, we hope to also have a reasonable looks-like prototype at the end of the week. Then when Gary returns from Japan, we plan to reach out to him for more feedback on the device, and perhaps give him the opportunity to try it out in person as he couldn’t do so on Monday.