Our goal was to tell a story capturing a cyberpunk aesthetic using older scrap electronics and colorful futuristic lighting.  The film takes place in a cyberpunk future, following the main character of a skeleton hand which becomes animated by electronic detritus.  The hand escapes the garbage and begins to infect a skull with its technology virus.

Our main goal was to capture a dark and dystopian-futuristic  aesthetic sensibility without creating something overly serious. We also wanted to continue using cheap, easy to make props and filming tricks that used the low-budget look of our props to their best advantage.

The colors of our scenes and the look of our robotic glove prop add to the cyberpunk sensibilities of the film while still leaning into the grungy look of electronic waste. Additionally the ending nod to Shakespeare helps position the film in a more comedic light. The sound effects and music helped accentuate both the idea of robotic sci-fi and cyberpunk.

Implementation:
We started by picking our aesthetic and coming up with an overall color scheme involving more intense blues, reds, and purples.

The first prop made was the robotic glove which was created using scrap old electronic parts including ribbon cables and pieces of an old computer mouse. The glove was then populated with several small colored LEDs that flickered and turned on at different points, giving the glove a glitchy but functional look. 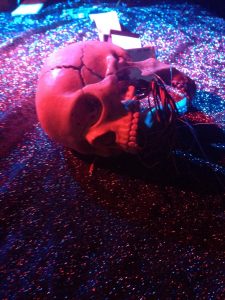 Original look of the skeleton hand within the gelatine mold 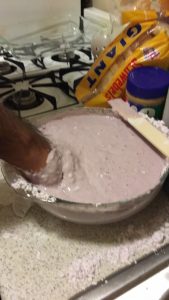 Nitesh becoming the mold for the gelatine hand 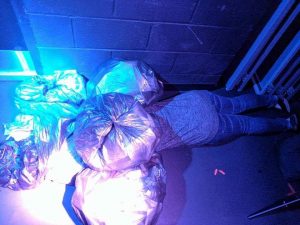 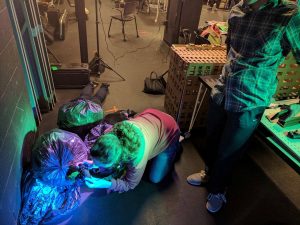