A transducer is for us simply some device which changes an input in one domain (such as light, sound, vibration, magnetic field, etc.) into an output in another domain.

due Thursday, Sep. 22nd, at the start of class

Does your project do something interesting? Does it use a part, or parts, you found in the Phys Comp Lab in a strange/funny/neat way? Is it intriguing?

You are welcome to use entirely off-the-shelf parts for your project, but if you want to stretch a bit further and do something more exploratory, such as building your own sensor, actuator, or transducer, that’s a great way to earn some additional points in this section. Here’s an example of a prior project that did this especially well: they built their own potentiometer which was motor-actuated.

This is the technical core of the project. A signal should flow through your project (i.e. from input, through the middle step, and to the final output) with little delay. It’s ok if it takes a second or so for the signal to get through, but it shouldn’t be much more than that.

Your transducer should be physically situated on a piece of chipboard (which will be given to you in class), with its input sensor elevated 1” off the surface centered on the left edge, and its output delivered 1” off the surface centered on the right edge. The middle step of the device can be arranged however you’d like. (The purpose of this standardization is to allow for multiple transducers to be placed right next to each other, to physically move a signal along the chain.)

It is acceptable for your device to need external power, but battery power is preferable if possible. The LCD display should be centered on the side facing the user (i.e. with the input to its left and output to its right).

You should employ an LCD display, preferably 16×2 though 20×4 is also acceptable, to give any viewer an active update of the status of both of the sensors as well as both of the actuators. The displayed value of each sensor’s or actuator’s state should be normalized to a range of 0–99 for ease of reading (for instance: though a potentiometer may have actual values 0–1023 on the Arduino, you should remap that range to a minimum 0 and maximum 99). The display should follow a particular formatting scheme which would display like so:

Explanation of each of the values displayed:

Further notes on the display:

Soldered connections for the middle step

Please make the electrical connections for your middle step of the transduction more “solid” than they would otherwise be by using properly soldered joints for these parts. (This means that whatever wires come out of those parts should be soldered rather than plugged into a breadboard.)

The Canvas module on soldering contains a series of videos teaching you various basic techniques.

due Thursday, Sep. 8th, at the start of class

Prior to class, work with your partner(s) to come up with three ideas for what you’d like to make for this project. Flesh out each idea a bit and provide for each idea:

The functional block diagram and electrical schematic should be produced using our customized version of draw.io. The mechanical/physical sketches can be done on a computer using CAD software, or drawn by hand on paper, or however you’d like.

Note that you may find your functional block diagram looks a bit different than those we have seen so far: if an element acts as both an input and an output, what would that look like? And if one element’s output is the direct input to another (as this assignment requires), how should you diagram that? Consider these questions as you’re doing your drawings, and don’t be afraid to branch out from the examples you’ve seen so far; this part of the assignment is meant to stretch your thinking a bit.

You should generate a Google Doc to submit your ideation. Use at least one page per idea. We’ll discuss them in class and you’ll get written feedback afterwards as well.

Submit a link to your Google Doc via the “Project ideation” assignment in Project 1.

You’ll be assigned a partner for this project; pairings will be announced in class on Sep. 6th. If you are becoming frustrated or feel like you’re not going to be able to succeed in getting a project together with your assigned partner, speak with Zach as soon as possible so we can sort things out.

due Thursday, Sep. 29th at the start of class

If you have any questions about the submissions requirements, or run into technical problems, be sure to contact the instructor before the due date.

To add an .mp4 video to your post, upload the file to the Media Library, and under the “Attachment Display Settings” dropdown, select “Embed Media Player” before clicking “Insert into post.” This will ensure that the video itself, rather than a link to the file, appears in your documentation.

When uploading still images, in the “Add Media” window, select “Full Size” under the “Attachment Display Settings” header, as shown below. (If you choose a smaller size, your images will be downsampled, potentially with very ugly and destructive results.) 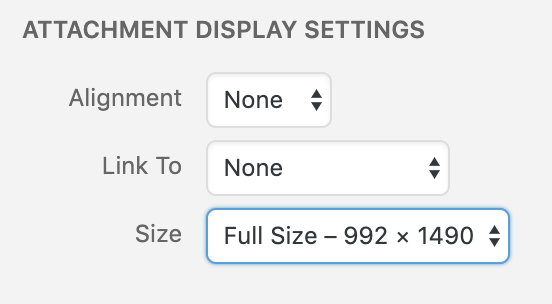 If you need parts that aren’t available in IDeATe Lending or in Phys Comp stock, the class budget may be able to make the purchase for you. As soon as you know you’ll need a part purchased, email Zach with these details:

Here’s a link to make the request a bit easier.