As an introduction to the motion capture system and skill analysis workflow, our team chose to investigate the skill of juggling a diabolo, an hourglass shaped circus prop that is balanced on a string connected to two sticks. After some initial investigation and testing, we found that the main skill behind the diabolo is balance, which is controlled in two ways: 1) by maintaining the speed of the diabolo via a windup technique 2) changing the offset between the two hands, which changes the tilt of the diabolo. In order to examine these movements further, we created a set of jigs that allowed us to track the diabolo’s position and spin as well as the position and angle of the two sticks. We then called in an expert diabolist, Benjamin Geyer, who we recorded using our diabolo set up. After analyzing his movements, we found that the diabolo wind up consists of several sharp tugs, that temporarily create a huge burst in velocity and gradually accelerates the diabolo. The offset hand positioning maintains balance in a linear fashion; as the offset in one direction changes, the diabolo tilts accordingly. Through this experimentation, we gained insight into the primary skills required in juggling a diabolo.

The goal of this project was to explore the skill of diabolo juggling, using motion capture as a quantitative analysis tool. Specifically, we focused on identifying the mechanics of balancing a diabolo, in terms of creating enough rotational inertia as well as coordinating the offset between the hands for balance.

Creating the Tracking Jigs for the Diabolo 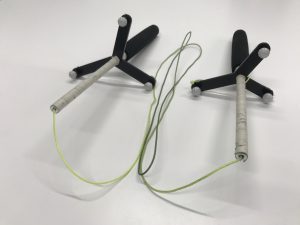 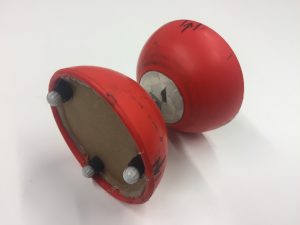 In order to track the diabolo using the motion capture system, we created a set of jigs that would attach the motion trackers to the relevant components. For the sticks, we created a set of acrylic holders with three markers each, arranged in a triangle formation such that the centroid was located on the axis of the sticks. For the diabolo, we created two cardboard circles with three markers, that we pushed into the two side hollow of the diabolo. The creation of these circular holders took some experimentation as our initial attempts either prevented the diabolo’s initial rotation or ruined the diabolo’s internal balance. However, these final press fit holders worked a suitable form factor for trials. 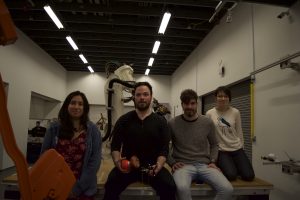 By analyzing these three metrics, we were able to identify clearly when the juggler would jerk the diabolo string. This jerking motion would cause a sudden sharp increase in the velocity of the diabolo, which would then settle down into a gradual increase of rotational velocity – some rotational acceleration. 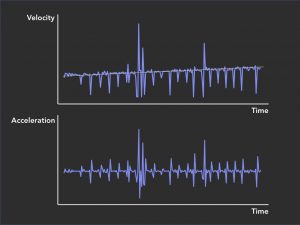 When analyzing the balance of the diabolo based on the hand positioning offset, we found a linear correlation; the hands’ offset would directly affect the more the diabolo’s angle of inclination.

The main challenges we faced on this project could be directly linked back to the complexity of the diabolo motions. Creating a series of marker sets proved to be challenging because of the diabolo’s hollowed shape, which meant that the motion tracking software would often not be able to see all of the six markers on the diabolo at once. Additionally, using a diabolo requires a good deal of space, which meant, during the video capture session, many times the diabolo or the sticks would be out of the motion capture’s field of view. This required us to become inventive in our solutions, one such solution being shortening the string of the diabolo. Moreover, these issues combined meant that our motion tracking data had to contend with a decent number of dropped markers, which created an additional challenge with analyzing the data.

The team that executed this project was Manuel Rodriguez Ladron de Guevara, Ariana Daly, and Sarika Bajaj. Manuel focused on the recording, processing, and analyzing of the motion capture data using Grasshopper and Python code. Sarika and Ariana both worked on creating marker jigs for the diabolo and sticks, recruiting Mr. Geyer to be our diabolo expert, the breakdown of the diabolo skill analysis, and the creation of the final video and documentation.

We would like to thank Mr. Benjamin Geyer for acting as our diabolo expert and taking time out of his day to talk with us and perform for our motion capturing session. We would also like to thank Prof. Zeglin and Prof. Bard for their insight and help in