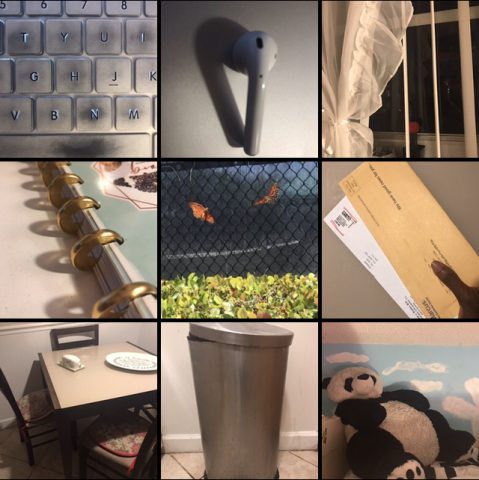 1)My Laptop Keyboard – My new primary method of communication, under more pressure and battery than usual

2)A Headphone – Living in a small apartment with 4 people, music is the only way to be able to hear my thoughts amidst the chatter. Usually, I rarely use headphones at home, since I lived alone when I was at school. I could trust home to be a quiet space to gather my thoughts without interruptions.

3) Window in front of my desk – My primary source of sunlight and peephole into the outside world, now forbidden.

4) My planner – Less so for managing a busy schedule, and more to keep me moving throughout the day and not getting stuck in a black hole of contemplation. Reminders of little things like drinking water and getting up are mixed in with actual tasks and activities I would normally do routinely, but have less urgency in today’s digital world.

5)Butterflies on an adventure – A reminder that while humans are struggling, nature is healing, if not flourishing. In a way, we’re giving it space to breathe.

6) Mail – Going to the mailbox is a new quest carrying correspondence from the outside world, although not particularly informative. A potential imposter, carrying the virus.

7) Kitchen Table- A gathering point of the only true human interaction.

8)Trash can – Removing waste has become a chance for fresh air I now look forward to. I’ve also made a habit to call one particular friend to say goodnight every day on my walk to the dumpster.

9) Giant Panda – A weight that helps me calm down enough to sleep.

As of April 8th, my plan is to utilize course hours to exploring alternative avenues of personal expression, movement and imagination. I’ve yet to discover how this could potentially manifest as a final project, but I’m dedicating my time to using these thoughts as a lens to explore short offerings in hopes a final project inspiration will be revealed. As a dancer who has been suddenly halted, I do want to use course hours to reinvent my relationship with locomotion and try ground myself again.

For this project, I captured my Macbook Pro’s touch bar as it depicted a condensed view of videos I took of myself through the day’s activities.

I was really curious about exploring space, so after trying a few apps, I decided to use Weird Type.

I built my sister a castle to sit and have her meal in. 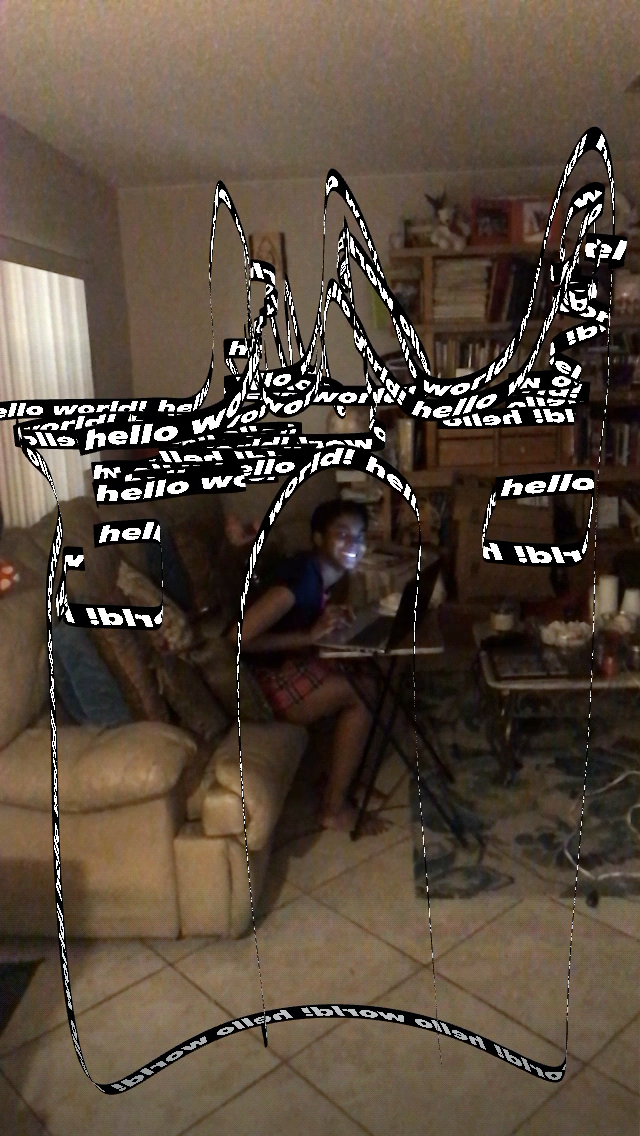 The last capture my phone cooperated with was using letters as architecture. I had a few other structures I liked better, but sadly the app wasn’t saving them. I suspect my phone was out of space from all the app downloading.

This machine was designed to help break tunnel-vision college students out of their mundane daily commute by encouraging them to notice their surroundings and awaken their imagination.

I wanted to know if I traveled on the busiest routes on campus, could I find something in them that would make the journey more lively?

I was really inspired by children and how they view at the world through curiosity and wonder. As young adults, I find we’re losing this whimsical way of looking at life, and I wanted to challenge myself and others to bring that back into our day to day.

I began by identifying common activities children did and then looking at common activities on campus to try and find any potential for a project. I eventually decided to walk the busiest routes on campus and pay attention to any defects or irregularities in my surroundings. I then photographed these elements and ran students from various majors and years through my machine, asking them to tell me what they saw in the images.

I chose to use a Nikon D3300 and an Ipad and Apple Pencil for this project. The Ipad and Pencil allowed me to record the pencil strokes of the student, so I could combine this with the video footage later in editing. I was initially planning on using a Cintiq tablet, but I figured it was more powerful and complicated than the students in my project needed. The Ipad and Pencil are also more familiar to a notebook and crayon used by children, and since that was the spirit I was trying to invoke, I felt that would be more appropriate.

I think the overall idea was successful! The students that went through the machine laughed a lot and mentioned that they wanted to look out for fun irregularities more often.

I also wanted the pen tracking to be synced to the students visual pen strokes in the video, but I realized after the fact that the time-lapse feature I used on the Ipad sped up the capture so when I brought it into Premiere and tried to edit the time back to match it just became a little choppy.

I think technically I could have edited the footage better if I had more knowledge of Premiere Pro and filmography. I still can’t figure out why the video will only export in vertical form. I think maybe it had something to do with my camera settings. I don’t think this is a failure exactly, but a steep learning curve I’m still on the way up from.

For my typology machine, I want to capture human exhalations of air while performing everyday gestures whose air patterns are invisible to the naked eye. To do this, I plan to utilize schlieren imaging. The study would consist of at least 3 participants being asked to laugh (prompted by viewing a funny video), whistle, cough, sigh, and yell. The final form would be an animated side by side GIF collage of each of the air patterns.

Please find my SEM results bellow of a piece of dry skin. For reference, these flakes are small enough to fit on a head of a pin; 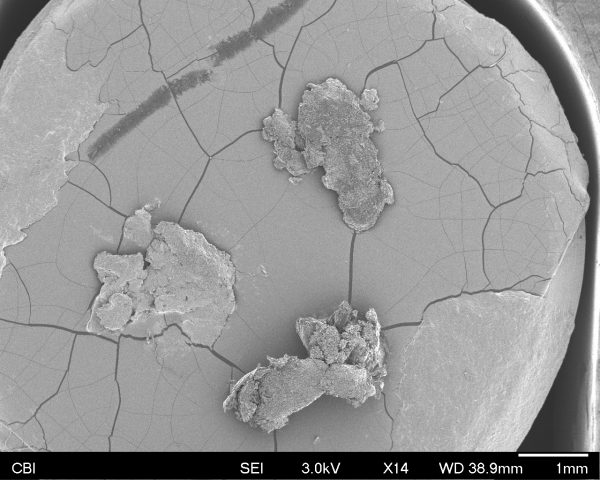 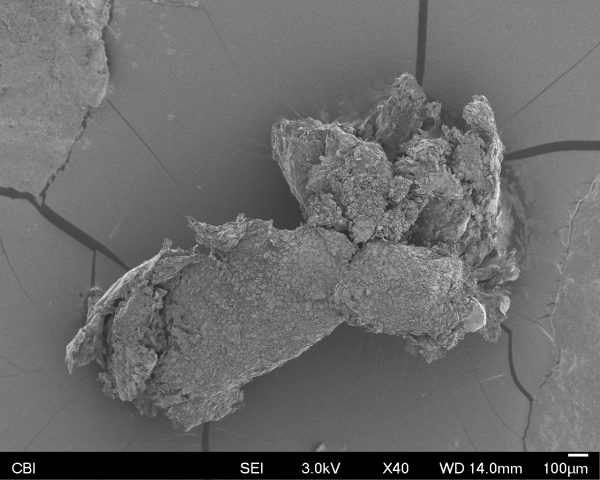 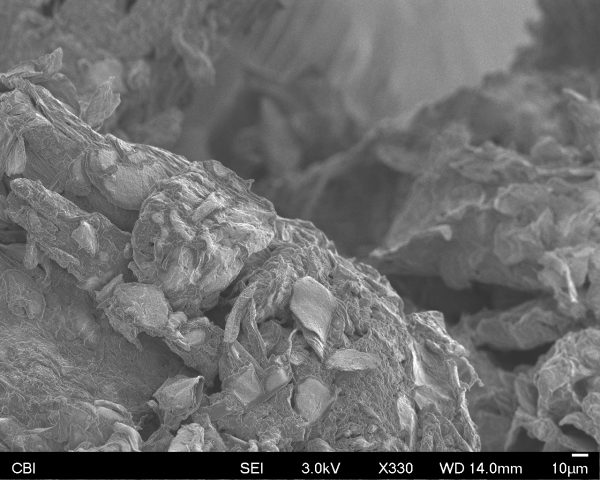 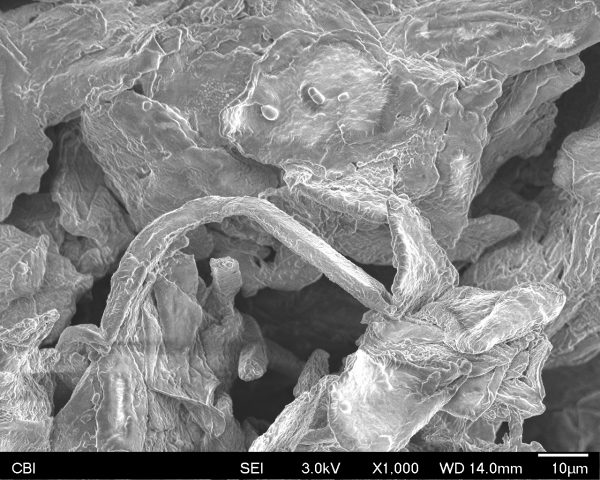 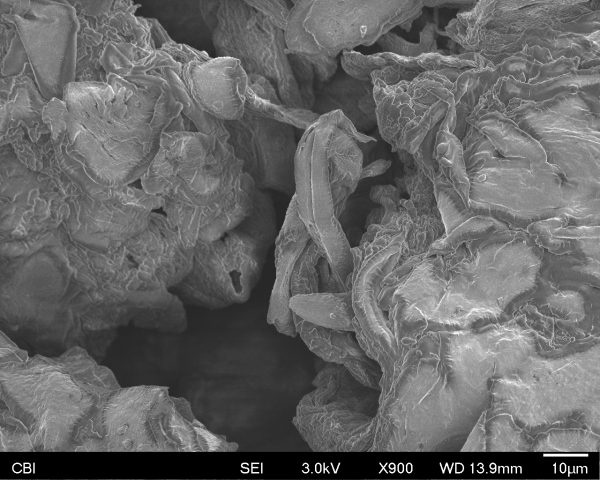 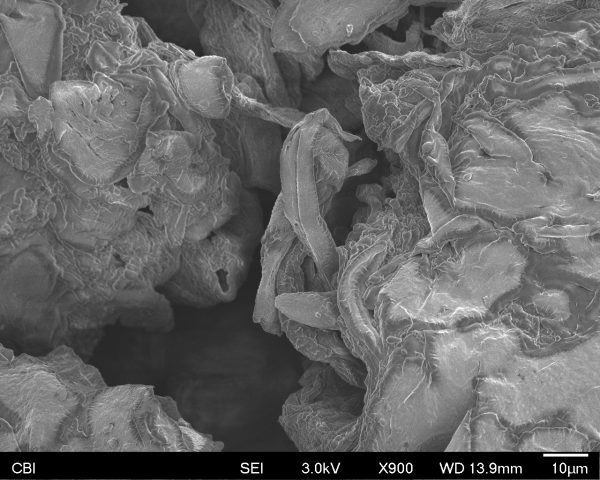 Donna can testify that I was really surprised and delighted by my experience. I think what caught me so off guard was how layered dead skin is and how it interacts with each other. The first thing I thought when I was looking at it under the microscope, is that it looks like a tiny cave where some kind of creature should live! The flakes definitely inspired me to design a world and a creature to exist in this space. It was pretty mind-blowing to think that came off of my body and has so much detail for something that was just a spec on my clothes.

Donna was telling Nica and I that it would be difficult to get the stereopairs done correctly because of where my sample was located on the disk. Apparently some positions favor the process more than others, but we gave it a shot anyway!

Reading this article made me recall the candid Machinery Lecture, and the collection of weird images taken from Google Earth I think it was. Even though the images were captured by a satellite, a human still needs to go through the stills to pick out the ones that indicate some strange phenomena. The camera itself, isn’t able to distinguish between normal and strange behavior, even though it still has the agency to “take photo’s”. I think my big takeaway when it comes to photography based on algorithms and computational methods is that it still needs a conscious human brain to make sense of the images and prescribe significance to them. I don’t think I could say that the relationship between the user and the camera could ever be separated completely.