My original idea for this was to have the pedometer run all aspects of the project: it would determine the song choice and the display. I also wanted to use the spotify API to somehow allow a wider range of song choices that would match the pace goal perfectly. Unfortunately, I got too frustrated trying to find a way to use spotify, and my serial connection didn’t work, so I had to split my project into a computer half and an arduino half, and give up on the song range. What I ended up creating uses the computer to set a goal, and the arduino to give the user a visual platform to match the set goal. This way, a user sets their goal via the p5 platform, which sets the song beat, and then has to run at a pace that ensures that the servo rotation matches the song beat. It’s fun to play with. I also added a graphic display that allows the user to see the beat of the song as well as hear it.

Here are my codes:

And my fritzing sketch: 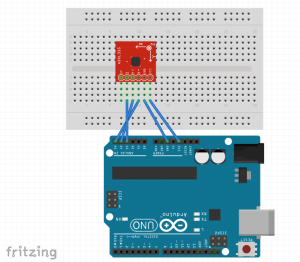