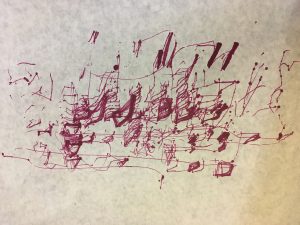 Above: its first drawing

I set out to make some kind of machine that could draw using XY coordination, with the idea that it should also have interchangeable drawing heads, some of which would also have motorized components of their own (for example an attachment that would swing a drawing pencil back and forth in strokes, while itself being moved through XY axis plotting).  I also wanted to program the machine such that it could be controlled with manual knobs, programmed with patterns to follow, or set to follow a vector image file.

I didn’t achieve all of these things, but I did assemble a functional XY axis plotter from scratch.  One thing I vastly underestimated was the amount of time it would take to make, test, and adjust the mechanical components of the machine (that is, almost the full time of making the project).  I also had trouble with getting the right kinds of motors, the first one I used wasn’t actually a stepper, and I had to cut it out and replace it.  Then I found that the motors I had finally put in were not 360 degree steppers, which is what I really needed to have the components move back and forth as far as they were physically able, so the machine’s full plotting range was smaller than intended.

I also went the quick and dirty route, using cut cardboard and hot glue, pulley systems made with bolts as axels and makeshift sprockets rigged out of shaped wired.  This meant the machine stuck and jittered a lot.  In some ways this was expected, and also a happy accident.  Any 3D printer or similar plotting apparatus could give me close to perfect XY movement, but this machine was more… shall we say, personal.  No matter how well the XY plotting software was made, any drawing it made would be filled with mistakes where the marker caught on the paper, or the carriage got stuck for a moment, or the fishing line didn’t engage with the top motor as strongly as the bottom one.  This I think makes for a more artistically interesting interaction between machine and mark making.  I want this thing to be obviously incapable of drawing anything like a person could.  I want it to draw in a way that only a fucked up robot could.  I think if I tried to make a similar thing in the future I would make it out of dumber and more intentionally haphazard materials.