inspiration is from a project from the MIT tangible media group titled “Moving Blocks Mimic Human Movements” (https://www.youtube.com/watch?v=PTm1e-tJJEg) . I intend to create an 2D array of movable blocks as in the picture below: 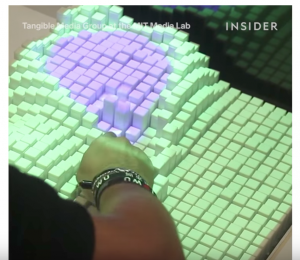 Each block would have a single neo pixel LED on top of it. The goal of the project would be to use this array to create a sort of “3D mirror” (the LED’s create the color; the blocks move up or down to add depth) reflecting objects/people front of it. In contrast to the MIT lab project which aims to mimic human movement, this project aims to mimic human appearance.

I’ll need some software that’s able to identify the contours of a person’s body (so I can do cool stuff like add depth with the blocks only to image person’s body), and openCV is perfect for this.